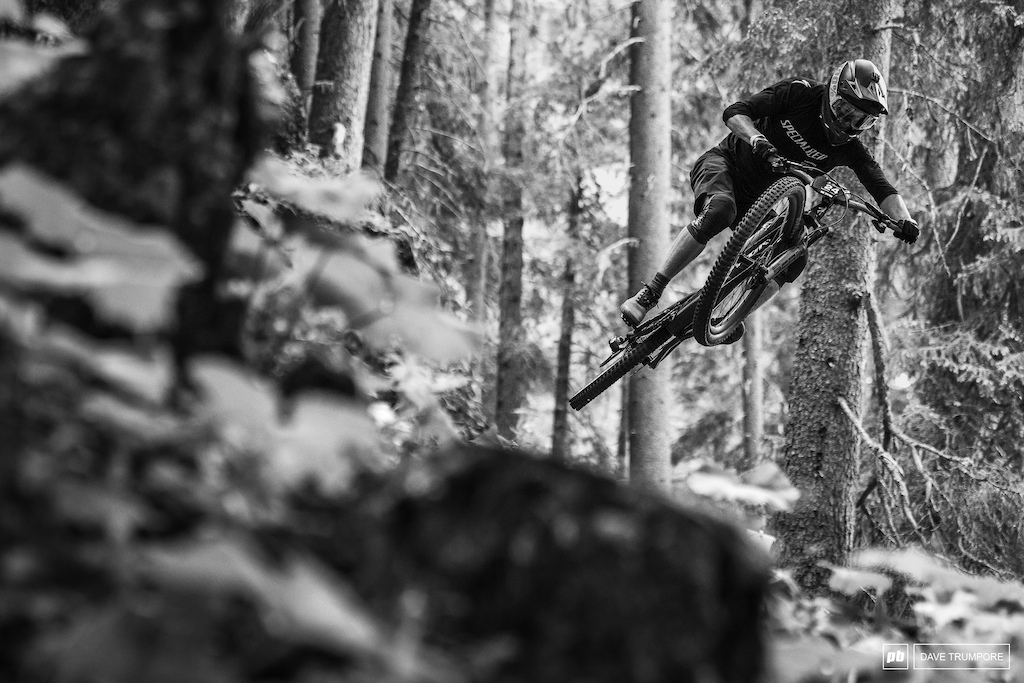 Charlie Murray has revealed that he may not be racing the EWS in La Thuile this week after a wrist injury from the first race week.

After 10th and 3rd place finishes at his first races with the Specialized Enduro team in Val Di Fassa, it was to the pits for some wild challenges with the other riders. While doing an impressive stoppie Charlie went over the bars and landed heavily on the tarmac.

Charlie announced on social media over the weekend that this was a bit more serious than he first thought and has sustained a bruised scaphoid and radius with a minor crack to the radius. He told Pinkbike that he won't need any surgery and the injuries are expected to heal in a couple of weeks. Charlie also told us his plan is to test out the pain while riding later this week but he will have to at least miss the first round with it looking unlikely he will make the start for the second race of the week.

We're wishing Charlie a speedy recovery and hope to see him back at full speed soon.

zombiezebra (Jul 5, 2021 at 8:53)
Literally anyone else would have made up a training accident that caused the injury. You have to appreciate that level of honesty.

imnotdanny (Jul 5, 2021 at 9:09)
Hard to lie about something that a lot of people recorded and posted online.

scott-townes (Jul 5, 2021 at 15:12)
I highly doubt his sponsors care if he was honest or not about making an insanely stupid mistake, haha. Shit happens, still a freak accident as I'm certain we've all done the same thing many a times without much more than a few scrapes.

mi-bike (Jul 5, 2021 at 15:27)
@imnotdanny: He should have blamed it on his front tire being mounted the wrong way around. Not a big issue on slick trails but some useful R&D on tarmac.

snl1200 (Jul 5, 2021 at 8:51)
That's got to be so frustrating! I think most bikers have experienced injuries and crashes doing silly things- however probably not too many have experienced them during a hard charging breakout year on the world stage with the eyes of the sport on you and whilst doing it for the gram. Hope this doesn't derail the momentum. Heal up!

brookscurran (Jul 5, 2021 at 8:56)
Pretty sure Charlie would be doing that in the parking lot regardless of the ‘gram’

snl1200 (Jul 5, 2021 at 9:08)
@brookscurran: for sure- poor wording- I more meant that it is available for everyone to see and replay via the gram and that might make it more frustrating.

nouseforaname (Jul 5, 2021 at 14:35)
@brookscurran: Instagram is a channel athletes need to pay attention to, just like cool shredits and bike checks on PB. Should be no harm no foul for his sponsors that he got hurt goofing off for the camera - after all there's been plenty of coverage of him as a result.

mountainsofsussex (Jul 6, 2021 at 7:51)
@nouseforaname: for sure, he's got a lot of clicks he wouldn't have otherwise got from that, then there's follow up from how he's healing, rehab videos... I'm not saying it's a good thing, but it'll hurt his online presence a lot less than it hurts his wrist

ripridesbikes (Jul 5, 2021 at 12:22)
If I was a sponsor of his, I wouldn't be upset with him at all. I feel like those contests are an important part of the scene and participating in them makes him a more relatable human for the fans.

CM999 (Jul 5, 2021 at 13:29) (Below Threshold)
I would be livid with him. He’s supposed to be a professional athlete getting paid to race. Injuring himself messing about at the party is a schoolboy error

ricksterjack (Jul 5, 2021 at 9:02)
Broke scaphoid a few times in my bmx days in highschool. Now I'm 33 and those injuries are coming back to haunt me. Fragments of bone in the ligaments from past breaks hit the nerves at just the right angle to induce pain. That Mobius x8 brace pops the loose lego in the wrist back in place and we can keep on riding. Stupid expensive though. We'll see what the MRI and hand surgeon say.

PJJ205 (Jul 5, 2021 at 9:22)
Just stopped wearing my Mobius brace a full year after breaking a few bones in my wrist and hand. Those things are wonderful! Worth every single penny.

madmon (Jul 5, 2021 at 10:34)
i broke both of mine...ya both thumbs in different riding incidents over a few decades and now I have some bad days where I can barely hold the bar with my left hand.I also broke 4 fingers one in 4 pieces and the fingers are ok just thumb pain. If I sleep with my thumb and index finger spread wide I have trouble the next day.
The worst was my left from a car door prize I hit a BMW who was charged for door assault but that did not help.
In October I get incredible pain from both thumbs due to arthritis caused by the fractures. Oddly when I have gone down to Jamaica for my winter tour season[dec-apr] the pain goes away and I have no symptoms. This season the pandemic had me barred from Jamaica after returning April 2020 and this past winter was painful. The left wrist is almost normal now the warm weather is back here in Toronto. Seems I have to use muscle balls till I die

dthomp325 (Jul 5, 2021 at 9:04)
Imagine breaking your wrist while mucking around on your bike and then Pinkbike publishes a front page story on it. Talk about salt on a wound!

dirtyburger (Jul 5, 2021 at 17:52)
Where are all the pro bike-coach dads that gave Thanee the tut tut for getting injured shredding some jumps?

Ironchefjon (Jul 5, 2021 at 12:28)
i mean tony ferguson tripped on an extension cord and ended up cancelling the khabib fight due to a torn up knee. silly shit happens.

filbertst (Jul 6, 2021 at 0:39)
Yet another 'professional' rider not being very 'professional' No wonder its not taken seriously outside of its own world.

madmon (Jul 5, 2021 at 10:20)
sad to see a rider down from self inflicted torture and sadly I feel it is from showing off maybe or achieving likes and shares. I would race.