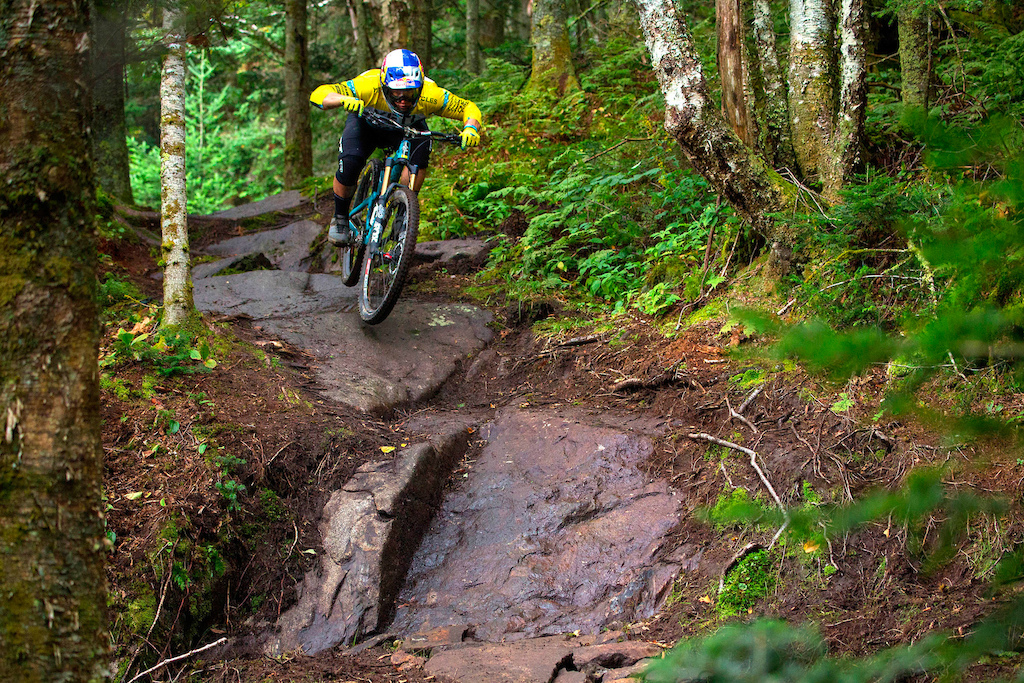 Adam Lukowski photo.
Today, the Enduro World Series (EWS) announced the addition of a round to their 2020 calendar, bringing the total number of EWS races to nine, including the Trophy of Nations.

Burke, Vermont, will be host to the sixth round of the EWS on August 1-2, a week before the EWS in Whistler, BC. This is the first time an EWS has been on the East Coast of the United States. Previously, Burke Mountain has hosted three EWS qualifiers and a round of the 2018 North American Enduro Series.

The mountain will have a brand new trail opening for the EWS in addition to current and revamped trails in an area already known for its technical rooty and rocky terrain. Trail builder and Burke local, Knight Ide says, “It’s been a goal of mine for a long time to bring an event of this caliber to my home town. To be involved and watch it all come together, there is no greater satisfaction in my opinion.”

According to the EWS, the 2020 Burke EWS is also the start of an annual competitive mountain bike festival in the Northeast. It will include live music, pro-athlete signings, centered around the main village and the Burke Mountain Hotel, "providing an easy landscape for lodging, food, exhibitors and, of course, bikes."

More information can be found at: www.enduroworldseries.com

waterbooy (Oct 22, 2019 at 13:21)
Seriously! A few Victory stages would've been so great. Curious how they will lay out the stages for an EWS level event. Obviously the 3 runs off the summit but that still leaves at least 3 more stages to sort out. Some trails in the lower bike park? One of the three Ts? Moose Alley? Maybe some Moose Haven trails?

Endurip (Oct 22, 2019 at 23:55)
@timmyelle: Your display of ignorance is astonishing, but yeah, you keep hating on the only non corrupt american politician that actually try to make America into a democracy instead of the oligarchy it is today.

jaame (Oct 23, 2019 at 0:04)
Please come with me to Rainbowland where unicorns are made of fudge and cotton candy, and everything is free.

victoryhillmtb (Oct 23, 2019 at 11:22)
Yeah !! And thanks. VICTORY HILL SECTOR, a not-for-profit group, was devastated by the Vermont Natural Resource Board's preliminary Opinion to put our trails under Act 250 Jurisdiction, a bevy of draconian permits designed for commercial industrial, retail and housing development, not bike trails. If you want to help Victory Hill out then there IS actually something you and your friends can do:

Because BERNIE SANDERS is primarily concerned with federal policy, it would be more effective to write to the following state officials, and tell them that you think that: 1) Vermont's Act 250 does not belong on bike trails; and, 2) Vermont's Natural Resource Board should stop using Act 250 as a bludgeon to punish private landowners for allowing bike trails to be built on their land and opening them up to public recreation (esp. those on Victory Hill) ; and, 3) placing Victory Hill under Act 250 jurisdiction is a shameful misapplication of the law, and directly undermines the State of Vermont's goal of supporting an outdoor recreation economy especially in Vermont's poorest rural areas like Essex Country - where Victory is located.

If you email a letter to these legislators your voices WILL be heard and maybe someday Victory Hill will reopen ! It will only take 5 minutes of your time.

Lankycrank (Oct 24, 2019 at 8:00)
@victoryhillmtb: Thanks for the great summary of talking points. For what it's worth, actually sending a paper letter rather than an email may be more impactful, as it does show that you took time and went through the trouble of submitting your enquiry in a formal way. Also, when writing to an elected official or public it's best to stay polite, rational and succinct in your writing. ;-)

mtbmdc (Oct 22, 2019 at 15:35)
@thebigheezy: YES! A stage win or two by some local talent would be awesome. ESPECAILLY some of the young new guys that have been crushing it!
Im booking a house tonight!

bikekrieg (Oct 22, 2019 at 11:17)
Upper J-Bar is truly an EWS worthy trail. It is incredibly technical, rowdy, steep, and fun. Looking forward to them building a new trail off the top as well!! Can't wait to have a race so close to home.

fedfox (Oct 22, 2019 at 11:36)
Absolutely agree! i did upper J bar-lower J bar - Wayne's world, what a blast that was. Super happy for east coast to have this event in such a fantastic place such as Burke-Kingdom trails.

sammyhedlund (Oct 22, 2019 at 10:32)
Just saw Richie in my hometown of Burlington this weekend (1.5 hours away from Burke). Maybe he had some inside info, and was doing some preemptive scoping?

pb-kg (Oct 22, 2019 at 13:49)
As a Best coast resident, I'm totally ok with alternating Beast coast and Best coast venues every year. Even ok with throwing a Rocky Mtn. round in there every 3rd year or so.

scott-townes (Oct 22, 2019 at 12:06)
haha yesss, pedaling up Burke's access road is so brutal. I would love to see that instead of them firing up the lift. I'm not sure the brakes on the shuttle vehicles could handle multiple rides up!

Bikerguy13 (Oct 22, 2019 at 20:23)
Can anyone else explain why EWS/World Cup events never seem to take place in the US west despite that being where the gnarliest/most mountainous terrain is in the US? It almost seems intentional at this point

Consider fan/crowd draw and travel logistics. Even though northeast VT is rural as heck, Montreal, Boston and NYC are all within an easy drive.

withdignityifnotalacrity (Oct 23, 2019 at 13:32)
West coast just had a round a couple months ago. It was on youtube and everything. www.youtube.com/watch?v=3wbnRqdCHfw

thenotoriousmic (Oct 23, 2019 at 18:49)
@AndrewFleming: have you done a survey and ranked the world’s gnarlyest trails?

AndrewFleming (Oct 24, 2019 at 9:14)
@thenotoriousmic: Nah, just an opinion, of course. And I was only talking about east and west US (not the world). I'm just an old (relocated) Yankee snob that's heard west coasters say how brutal the tight, wet, rooty, rocky, slick trails are in the northeast that I'm convinced what the east lacks in vert it makes up for in gnar.

AndrewFleming (Oct 25, 2019 at 6:03)
@Bikerguy13: Altitude and gnarlitude are two separate categories. And doesn't hero dirt make a trail easier? That's why you feel like a hero.

withdignityifnotalacrity (Oct 23, 2019 at 13:35)
Don't take this as a negative, but I'm kind of surprised it's not at Killington. Where does Burke rank in the East Coast bike park hierarchy (sorry, noob question I guess, super stoked to have something within driving distance don't get me wrong)?

Anyone want camp with the sheep at my mom's farm?

harryhood (Oct 22, 2019 at 12:39)
Hopefully the situation at Victory can get straightened out before this.

vggg (Oct 22, 2019 at 17:52)
Tiki Bar parking lot. Beer, bathrooms and in the heart of E. Burke. In all seriousness as a comic arrive 1 wk before and park your vehicle for a spot. Don't expect to book close unless you do so now. Very limited rental supply.