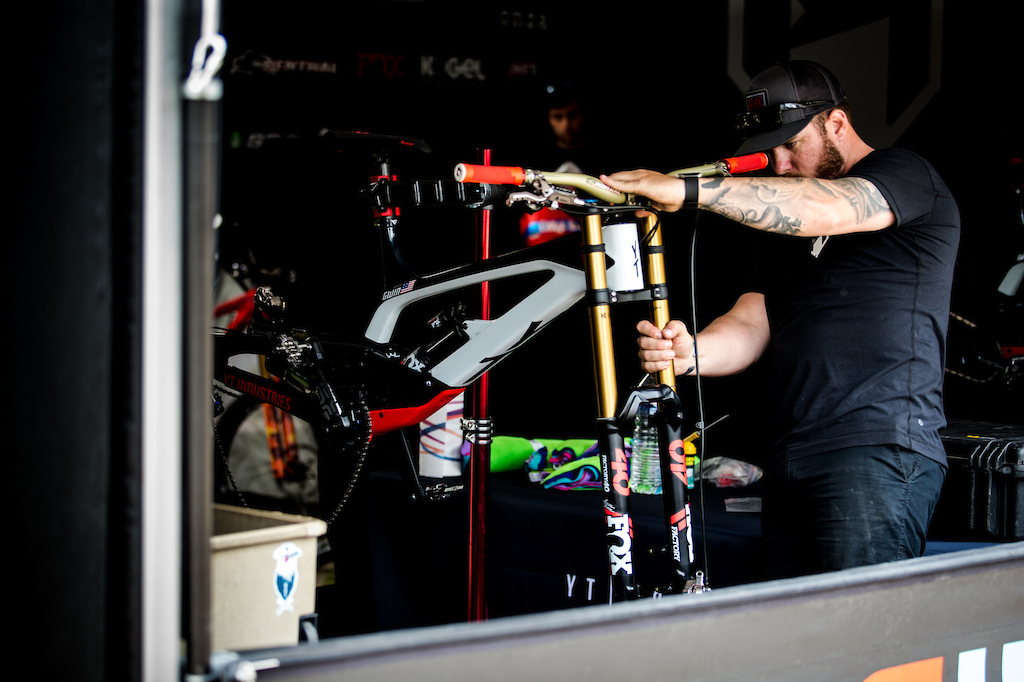 John Hall // American Made
Video: Knowmad Development // Photos: Isac Paddock // Words: Robert Gill
John Hall is the meticulous mechanic ensuring Aaron Gwin’s bike is set up for yet another unstoppable season. The man from The Black Hills of South Dakota has been winning races alongside Gwin since Pietermaritzburg in 2014, so his ability to wrench for the best is carved into rock. He spent four years in the United States Marine Corp as a Humvee mechanic with 3rd Battalion 5th Marines. He completed one combat tour to Fallujah, Iraq maintaining convoy vehicles and serving as a machine gunner on the same convoys in his down time. His next deployment sent him to numerous countries around the South Pacific training with foreign militaries. His experience in the military certainly prepared him to handle stressful situations with the calmness needed to get the job done efficiently and correctly. It was while he was stationed in California that he found his love for The Golden State and decided to take up roots in Temecula.


It’s not easy to get to the top, and Hall is certainly a testament to that. Life after the military started off working a concrete job for minimum wage and then by grafting non-stop in a low-key repair shop and eventually a high-end bike shop. His diligence and work ethic didn’t go unnoticed and eventually he was offered work at a few races, mostly for free or his own hotel room. However, he kept on doing his thing and eventually networked his way with grit and determination into the Aaron Gwin pit: 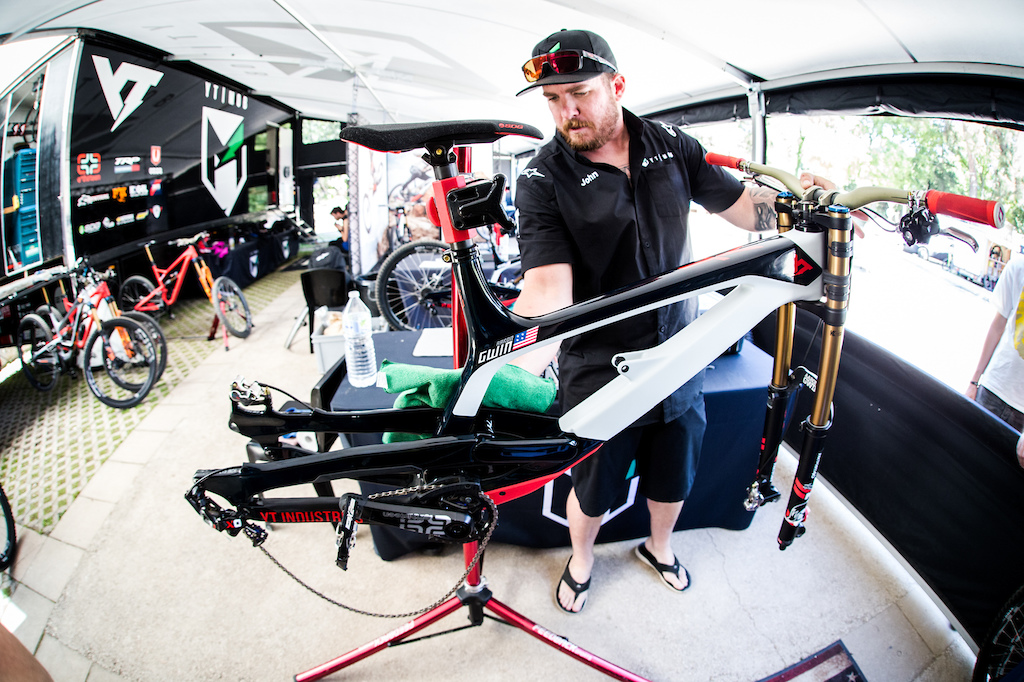 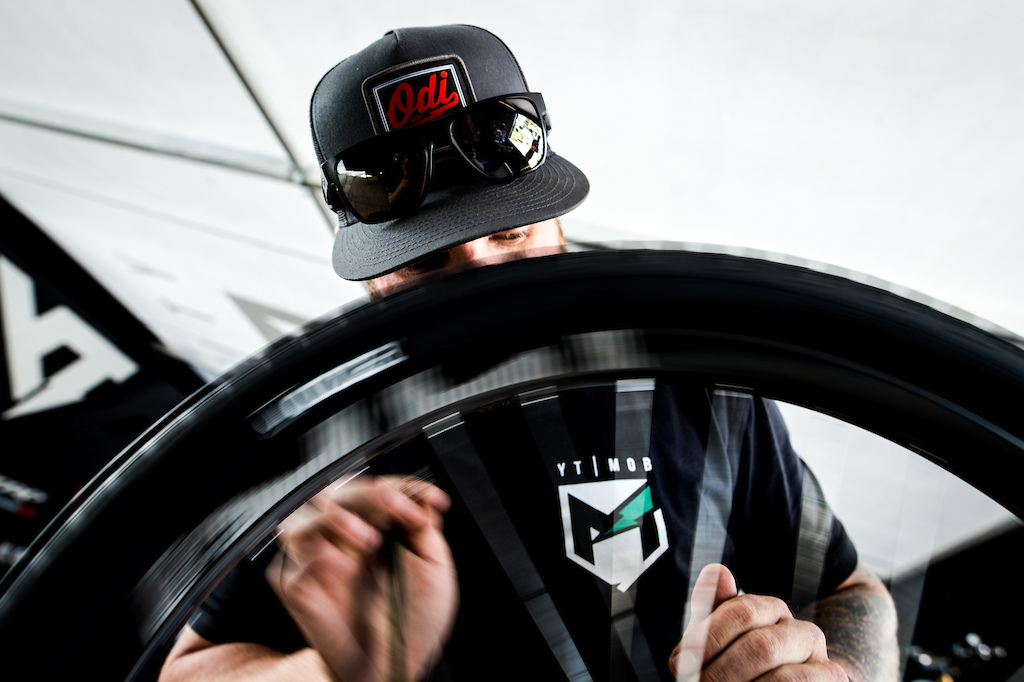 Hall has now provided the sturdy framework for 11 of Gwin’s UCI Mountain Bike World Cup wins, so it's safe to say he and his compatriot have formed a close bond: 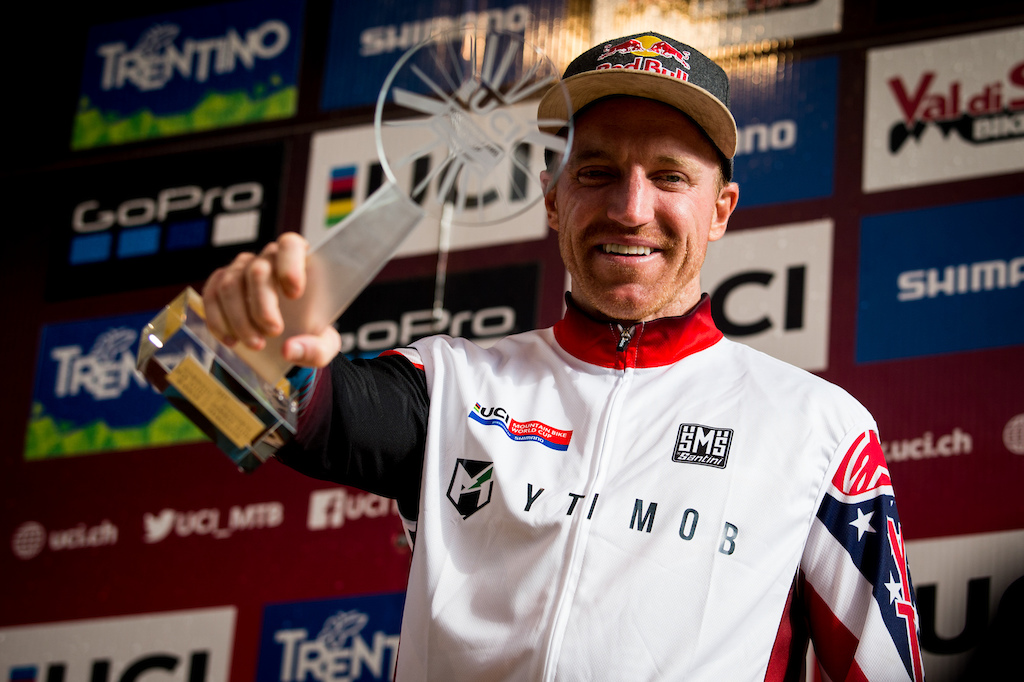 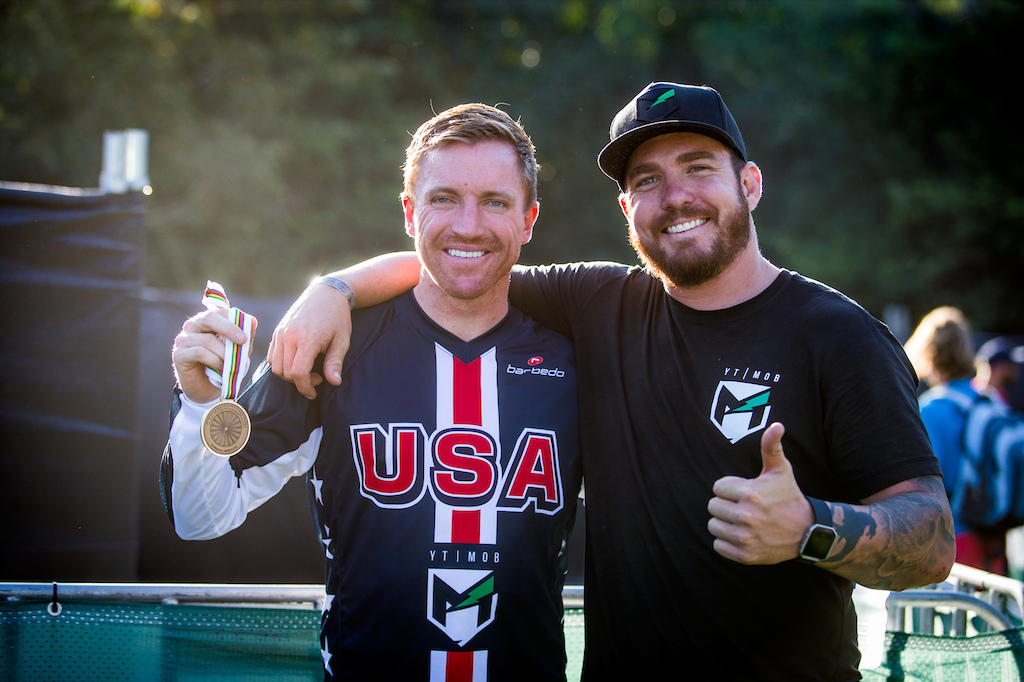 The son of a rodeo professional, Hall knows what it means to follow a dream. Much like him, his father would spend long spells of time away from home doing what he loved chasing the rodeo circuit. Excellence at a high level obviously runs in Hall’s veins and his dad was no amateur, making it to the National Finals Rodeo (NFR) twice in his career. When it comes down to it keeping his rider safe on a beautifully running YT Tues CF Pro Race - Mob Edition, Hall is in his element. The actual winning is up to Gwin, but we all know the talent that guy has on a bike. 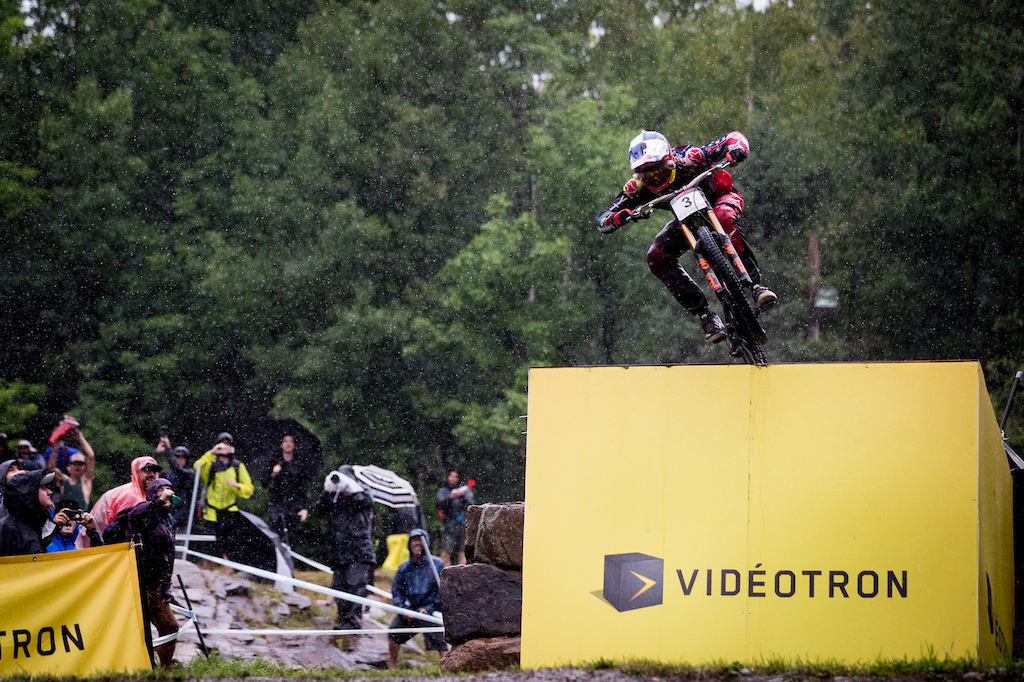 Being a World Cup mechanic is tough work for sure, but Hall has never struggled in that department, as he revealed:

Burnhardx (May 16, 2018 at 11:56)
Respect for having to work a shitty job at minimum wage after military ... Guess that's a way if saying thanks for risking your life serving your country.

Gamsjaga (May 17, 2018 at 0:18)
@Burnhardx: Don’t know why you get downvoted for this ... the way veterans are treated after serving seems to be a touchy subject.

jaame (May 17, 2018 at 3:56)
Great article. I didn't really have an opinion about him before, but now I know his history I think he's a boss. Respect to any man who fights overseas to protect our way of life. You deserve a solid job back home, yo.

jaydubmah (May 16, 2018 at 7:19)
Great vid for anyone who's entitled and likes to belly-ache about their current situation. This guy paid his dues, always showed up and busted his ass (sometimes for free!) to get where he is.

It takes serious commitment to "be in the right place at the right time" and get the dream gig!

pigman65 (May 16, 2018 at 10:58)
"I work a bit harder, a little bit longer, pay more attention to detail, and that in the end eventually just hopefully looks like success."
Top quote , it's a pity more people don't have this ethic.

"Hi there, I'm John Hall. I work harder and longer than you do and I do my job better. Cheers."

vinay (May 17, 2018 at 7:24)
@atrokz: Yeah I don't question John is a great mechanic. I'd just say so are others who wrench at top level. Greg had a crash when practicing for the WC finals last season, which made his bike unrideable. His mechanic had a fresh bike waiting for him when he came back down. Now, that was impressive too. Better than all the others? I'm not going to say that. He just did a great job. And I trust so does John.

zmtthw (May 16, 2018 at 7:49)
Gerat Vid! I think what stuck out most to me in such a short clip is his point/s about his work ethic. It is easy to watch riders and supporting folks as they celebrate in the limelight but there isn't a big push to show the process of getting there. It could have been his natural personality or what he was taught while in the service but positioning yourself on a constant basis to reach whatever goal you have....is critical. I served as well and while the military lays out a plan for you per say, it is up to each and everyone to make the most of it. If you want to get to a specific location/job/etc.....don't wait until the wind blows you in that direction...make the right moves and strategically insert yourself when/where needed. Hats off to this guy and his team! Winning and results are what most hang their hats on but for me, appreciating the process and the purposeful moves to get there is something of more interest.

Patsplit (May 17, 2018 at 16:30)
Not to downplay any of the above, but I didn't get the idea he had a specific goal in mind when he got out of the Corps. He may not have been hoping to wrench for a top tier DH team, but positive thinking and strong work ethic led him to a form of success.

There is always a bit of chance in a story. Had he been stationed somewhere else other than Camp Pendleton or had he moved back to SD after his service, I doubt he would have bumped into Houseman or Carter. Nevertheless, I believe his strong work ethic would have led to him success of a different form, (e.g. owning his own badass bike shop in SD, etc).

Yes, if you want a specific goal, you must pursue it relentlessly and be willing to work harder than everyone else who may want that coveted job, but also remaining positive and working hard at whatever you have in front of you, I believe, can also lead to some success no matter what.

literally (May 16, 2018 at 8:02)
inside line with john today www.vitalmtb.com/features/The-Inside-Line-Podcast-Pro-Mechanic-John-Hall,2368

Tinga (May 16, 2018 at 17:47)
As much as I don't think pinkbike would appreciate the link, this was a great interview. John definitely being a bit modest though. sounded like he just got lucky over and over again but we all know if you can work for a detail oriented rider like Gwin you gotta be a hell of a mechanic.

bman33 (May 16, 2018 at 8:46)
Love articles like this one. A bit behind the scenes. I knew John was a solid guy. However, this puts a great light on him and further nod to his skills and partnership with Gwin

You guys gonna debut the 29" Tues at Ft. William?

TobiasHandcock (May 16, 2018 at 21:13)
The son of a traveling rodeo star from South Dakota, Keeping marines safe by keeping the Humvee's running to keeping the no.1 downhiller on the planet safe by fixing his bike. Now that right there is an American hero.

mtemp (May 16, 2018 at 8:49) (Below Threshold)
@CaliCol: ease up mate, he's canadian, they don't really have a military and their cops ride mules and they belong to the Queen of England.

bman33 (May 16, 2018 at 8:57)
@mtemp: Really? Gotta perpetuate the 'd-bag' American stereotype? Canada is rad. Most folks there are laid back (at least in BC). Very welcoming, great MTB riding and Whistler is Meca. @Mwmg15 not all of us are a-holes

mtemp (May 16, 2018 at 9:12) (Below Threshold)
@bman33: Make America Great Again bro. Really? Gotta perpetuate the 'snowflake' apologizing for everything American millennial safespace stereotype? Dude your sociology professor is so proud of you right now!

mtemp (May 16, 2018 at 9:16) (Below Threshold)
@bman33: Also, on behalf of Muslims everywhere shouldn't you be offended by your own cultural appropriation of the word Mecca and equally offended by your misspelling it? Hope I didn't just mansplain that too much for you.

bman33 (May 16, 2018 at 9:33)
@mtemp: Wow, lots of keyboard courage man. Look me up if you ever come to Denver, we can ride, have a beer and you can explain 'snowflake' to me in person. That's if you ever leave your little bubble of Cali. Your parents must be proud. Oh, and I am 44. You are the the millennial category according to your profile.

Ironchefjon (May 17, 2018 at 4:48)
This guys a class act. I remember meeting him in the pits at Windham and he was carting around Gwins bike. I stopped and talked with him, and he let me bounce the suspension around and grab the brakes and what not. Answered all the questions that my buddy and I had for him, and was gracious as can be. Big ups for John Hall.

But I see sandals while wrenching in pits and cringe! Must be a brave and/or tough mofo... a wrench to the toes is no fun! haha

vtracer (May 16, 2018 at 19:32)
So if John hall was a diesel mechanic, that may explain why Aaron Gwins' so damn fast on his hidden motor DIESELbike

alejandrolz1250 (May 16, 2018 at 22:00)
there is a secret mechanic knowledge the pros use to ride that fast, they don't hire mechanical engineers for nothing.