Must Watch: Tomomi Nishikubo is a Desert Island Castaway in 'Ride to Survive'

YouTube star Tomomi Nishikubo is known for his creative way of riding bikes. With a strong background in trials riding, the Japanese rider approaches obstacles in a unique way that never ceases to amaze. In “Ride to Survive”, his latest project, Tomomi finds himself stranded on a small, deserted island in Japan. Luckily, his trials bike got washed up there as well. For Tomomi, there isn’t a better tool to explore the island and to go on a trick-filled hunt through the woods, looking for food with lots of creative action along the way. 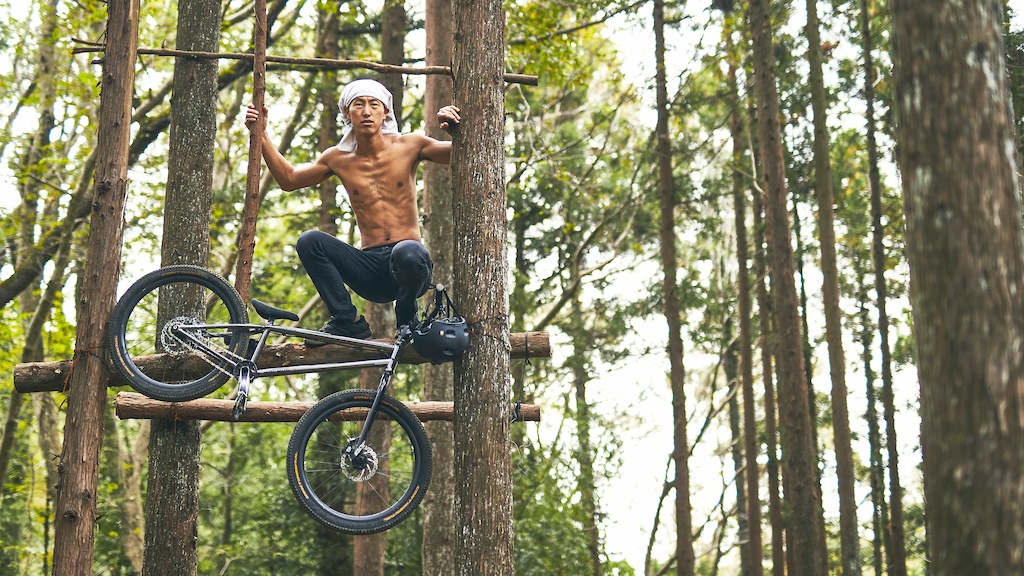 © Naoki Morita
Making the most of it while waiting to be rescued
The beginning of the video shows Tomomi lying on the island shore, half-covered by water, on a rocky beach, slowly regaining consciousness. After looking at his surroundings and a failed attempt to light a fire, Nishikubo finds the island’s only other “inhabitant”: his trials bike. With a few quick pedal strokes, Tomomi is back in his element. No matter if he’s lighting a fire, catching fish or picking fruits from a tree, the Japanese Bike-Ninja uses his bike in ways that would make MacGyver proud. With technical finesse, Tomomi shows top-notch trials riding in unfamiliar terrain and tricks like a tire tap to front flip on and off a slackline. 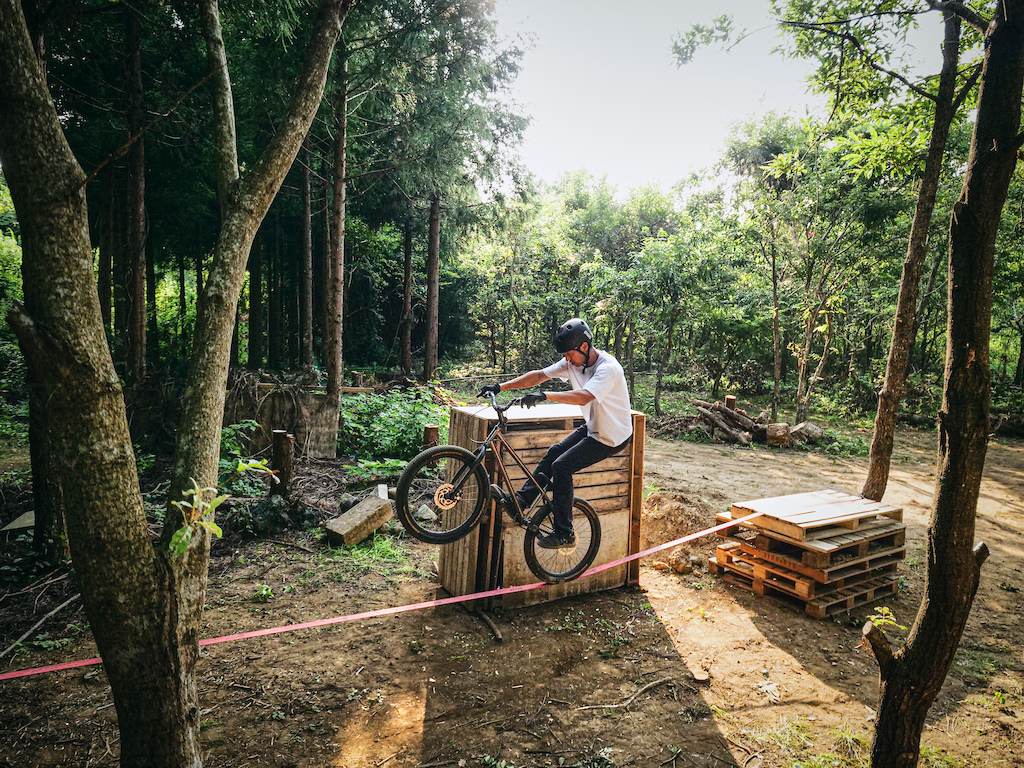 By the end of the 7:51 minute-long clip, Tomomi climbs the highest ridge of the island and spots a ferry not too far away. Having proven his survival bike skills to the fullest, it is time for him to return to civilization on an improvised raft. Tomomi gives it the final push by jumping on it with a back flip and sails away into the sunset. 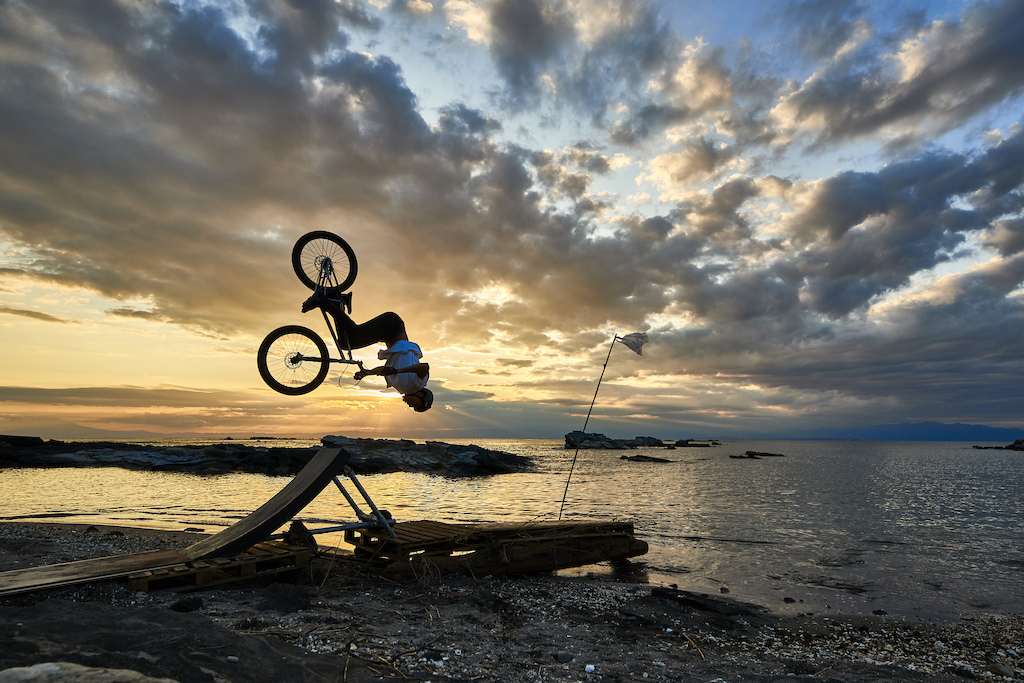 © Naoki Morita
Building most of the obstacles all by himself, the Japanese dedicated the entire summer to bring his new project to life. Accompanied by two filmmakers, Daisuke Yamasaki & Jidai Malakar as well as photographer Naoki Morita, Tomomi had a brilliant time filming for this video and even managed to catch a fish with the help of his improvised fishing rod, which in his words was “the most delicious fish I ever had”. 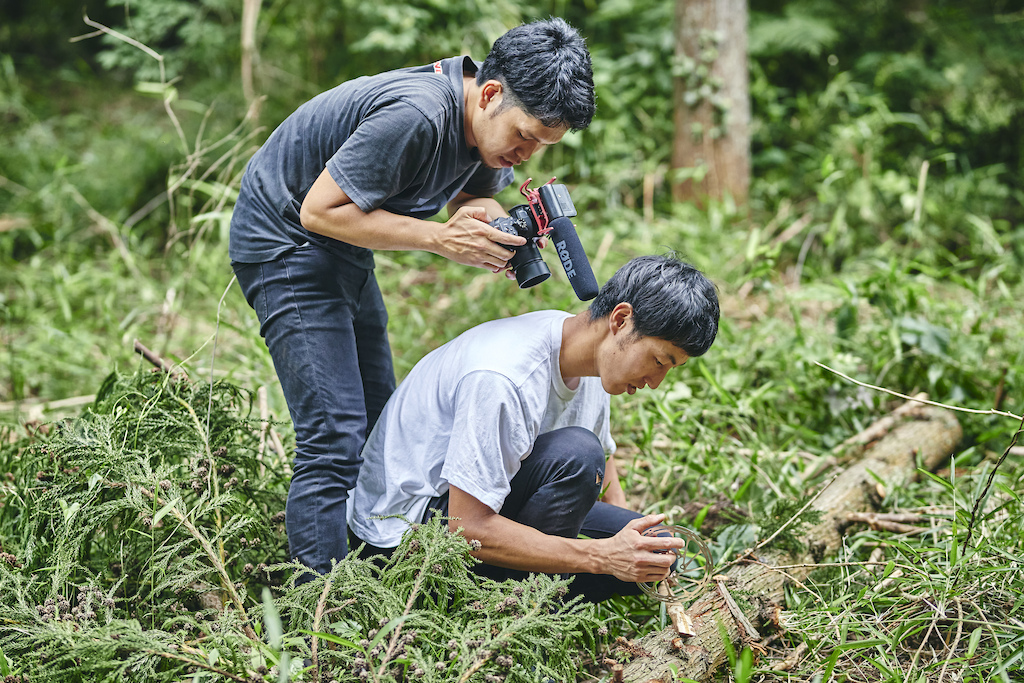 © Naoki Morita
If you find yourself stranded on a desert island, you will have to improvise
If you want to find out more about the process behind the work for Ride to Survive, keep your eyes peeled on Tomomi´s YouTube channel to not miss out on the deep dive Behind-The-Scenes video, which will be going live in the upcoming weeks.

bikeybikeybikebike (Dec 1, 2020 at 8:37)
The crash take from that trick was surprisingly tame! I was expecting carnage.

rosemarywheel (Dec 1, 2020 at 7:28)
You are amazing Mr. Tomomi. You and Danny should do an edit together! thank you for a great start to my Tuesday

matt721 (Dec 1, 2020 at 9:31)
this guy is one of my favourite instagram follows. so underrated. does danny mackaskill stuff on an aluminum kona process with an SX drivetrain

mrpfp (Dec 1, 2020 at 10:16)
This guy deserves so much more coverage. His videos are unique and his street style blended with trials skill make him a pleasure to watch.

landscapeben (Dec 1, 2020 at 10:01)
That last photo when seen in a thumbnail on a phone looks like a guy with a silenced pistol held to his head in the jungle, which gives a whole other expectation to viewers... I thought we were going South Pacific WWII POW camp reenactment / mtb promo!

its just that Tomomi normally is a girl's name. Impressive riding!

Sardine (Dec 1, 2020 at 18:51)
Thank goodness he gave up on the fire and found the bike! Otherwise we'd have to watch him make coffee to start the video.

scottbellvisuals (Dec 1, 2020 at 10:27)
Hahah just the right amount of cheesy to make me laugh and stay on the video. Amazing skills and such a fun vid.

freeriderayward (Dec 1, 2020 at 19:38)
Fantastic video, this guy looks up to the big names but he is on par with them riding wise!! I dreamed up a wall climb just like that, stoked to see someone do it

rodeostu (Dec 1, 2020 at 10:41)
That was awesome. Very reminiscent of the quirky style of Gou Miyagi's skateboard videos.

ChrisNJ (Dec 2, 2020 at 15:35)
These guys are killing it. His videos are always lighthearted, enjoyable and fun to watch. Keep up the great work gentlemen!

cyclecuse (Dec 3, 2020 at 15:48)
So rad! I know him from little clips on instagram but this long form is really impressive

SJP (Dec 1, 2020 at 4:12)
They couldn't do the opening shot from a slightly different angle, so there wasn't a boat a few hundred yards behind him?

rosemarywheel (Dec 1, 2020 at 15:33)
I didn't notice that until you pointed it out. Besides it's entirely plausible to miss a chance at rescue from a deserted island because you are to busy staring at said island.

Having said that, good eyes and I will remember both turn and look at the horizon to make sure I am not missing my chance of rescue should I ever be washed up on a tiny deserted island as well as check in the bushes for a bike to pass the time.

By the way, you did like this great edit, didn't you?

mi-bike (Dec 1, 2020 at 19:21)
@SJP You seriously thought he had a camera crew with him when he got stranded? This is obviously a *re-enactment* of what really happened after he washed up on that rocky shore!!! Duh...