A film comprised of its parts, By The Midnight Sun brings together the seemingly unending colossal terrain of the Alaskan backcountry and a collective of professional mountain biking’s most unique and acclaimed talent. Join Canada’s Kurt Sorge and Alex Volokhov, Belgium’s Nico Vink, Australia’s Remy Morton and Utah’s Jaxson Riddle as they use their combined abilities to scout and ride first descents on the biggest mountains they have ever ridden. 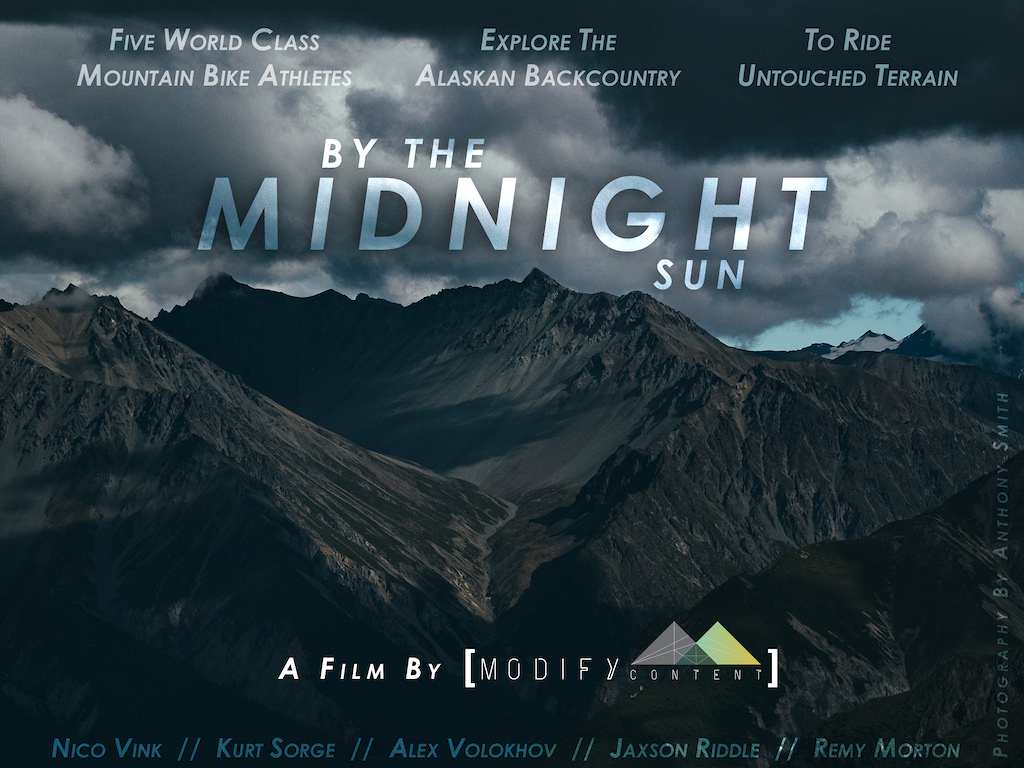 GorgeousBeauGaston (Oct 14, 2022 at 19:01)
Energy drink sponsors are over - salmon sponsors are in. Can't wait to see these guys rocking their well deserved salmon helmets.

Gilmarques (Oct 16, 2022 at 16:53) (Below Threshold)
These absolute legends go on an epic trip like this, provide us with such epic footage and stories, and most of people are caring about the stupid salmon ?? Wtf is wrong in this world? Seems like people don't really care about the riding anymore... go watch your bulsh*t YouTubers instead

woofer2609 (Oct 17, 2022 at 10:19)
@Gilmarques: because many of the people here are fairly highly educated 40+ yo's who desire a certain level of subtlety in many aspects of their lives And even if they're not 40+, most would be happy to endorse a product that doesn't treat them like idiots. Read the room. Most 15 yo's aren't buying Sockeye, so appeal to those that are, and market appropriately. It's a win win.

americandentalassociation (Oct 15, 2022 at 8:41)
Finally, a riding style we can get behind

GraemeMeiklejohn (Oct 14, 2022 at 14:56)
Coulda done without the salmon advertisement right out of the gate.

gramboh (Oct 15, 2022 at 0:35)
it was just over a minute long... probably should've been half that length, food looked great but bit of a miss on the vibe of the edit. Riding afterwards was pretty sick, those are some pretty f*** off big lines the boys were on, massive vert!

GraemeMeiklejohn (Oct 15, 2022 at 12:23)
@nerdville: I don't believe that video has a minute of someone awkwardly talking to camera about the benefits of Red Bull energy drinks in it, but I could be mistaken as its from a decade ago.

fartvandalay (Oct 14, 2022 at 15:01)
you lost me at sockeye salmon. literally unwatchable after that

Twin8 (Oct 14, 2022 at 19:50)
I think the salmon ad was particularly egregious because it was so obviously an ad, and so obviously not bike related, but the video didn't dignify the audience by presenting it as such. Instead it just pretended like this random salmon info was a valid part of the narrative of the video.

nerdville (Oct 15, 2022 at 15:45)
Sponsors make every video on this site happen. So they should get credit for their effort. Just like you should give your parents credit for paying your bills.

Twin8 (Oct 16, 2022 at 10:09)
@nerdville: I don’t have a problem with sponsors. I’m just disappointed that they tried to pretend that the salmon scene was anything but an ad.

nerdville (Oct 15, 2022 at 15:51) (Below Threshold)
You are right. Pros should only one up each other and if their videos and photos dont out do that clip they should just stop filming.

OlSkoolJake (Oct 14, 2022 at 17:42)
Bristol Bay Sockeye..... You spelled Skeena, Fraser, Columbia, Sockeye runs wrong.... Anyone from the coast with a salt of knowledge. Knows why Bristol Bay has the largest run caught. Vast majority of those fish caught there, aren't actually from that system... They are for a lack of better term, "poached" before the get to their home systems..... In BC and Washington....

timmayak (Oct 14, 2022 at 21:25)
And everyone also knows that the best salmon and halibut are caught in Alaskan waters...doesn't matter where they spawned.

timmayak (Oct 15, 2022 at 19:16)
@chugachjed: I mean your just negating what you said in your first post saying that they are "poached" in bristol bay before they get to their home systems in BC and Washington...Now your saying they are swimming up into Iliamna to spawn. So why do the fish try to go to their home systems...to spawn and die

chugachjed (Oct 15, 2022 at 19:54)
@timmayak: Bruh, I'm not the one that said they were being "poached" the word would be intercepted anyway. King salmon headed to BC, Washington, Oregon, and California are intercepted by the SE Alaska troll fleet but the reds(sockeye) caught in Bristol bay are swimming up the Kvichak, Newhalen, Wood, Nushagak and the other rivers in the Bristol Bay area. The dude that was accusing us good decent Alaskans of "poaching" BC salmon is some salty old canadian that refuses to admit that their own DFO has ruined their native sockeye fishery on behalf of the reckless promotion of atlantic salmon pen farms all along the dope ass island he lives on.

JosMaple (Oct 14, 2022 at 20:13)
I couldn’t do it… made it half way using a lot of the 15sec skip button. I’m certain they had some great footage.
The audio over scenery without the context of a face or name was really off putting.

Jvhowube (Oct 15, 2022 at 8:49)
Yah that and while this is definitely gnarly and they are way better riders than I'll ever be, it's not that exciting to watch. I am suddenly in the mood for a bagel and lox though.

mtb-pterod-ak-tyl (Oct 14, 2022 at 15:02)
Great to see Pinkbike reppin' the AK! So much to explore up here! Great content. I'm hopeful that AK can attract some more mtb development, but huge props to the local mtb advocacy orgs for doing what they have been doing over the last decade or so with the trail development! Onwards and upwards in the Last Frontier!

woofer2609 (Oct 14, 2022 at 21:39)
Gorgeous landscape.
Free content needs a funding source, I get it, but subtle acknowledgement /endorsement properly placed at the end of a piece is as productive and doesn't seem out of place,

(tucks in napkin and grabs silverware)

singletrackjamaica (Oct 15, 2022 at 19:44)
This definitely got me all fired up about grilling salmon and drinking Alaskan beer. The grill and RV are legit too. I think it was missing a grilled meat angle though.

captaindingus (Oct 16, 2022 at 2:11)
that salmon did look pretty tasty also the ender line and the one where nico just went full gas over the top of that ridge was so wild

mjllang (Oct 15, 2022 at 11:27)
Hike up the damn mountain if you're going to disturb the animals by surfing junk lines on the descent.
Below threshold threads are hidden