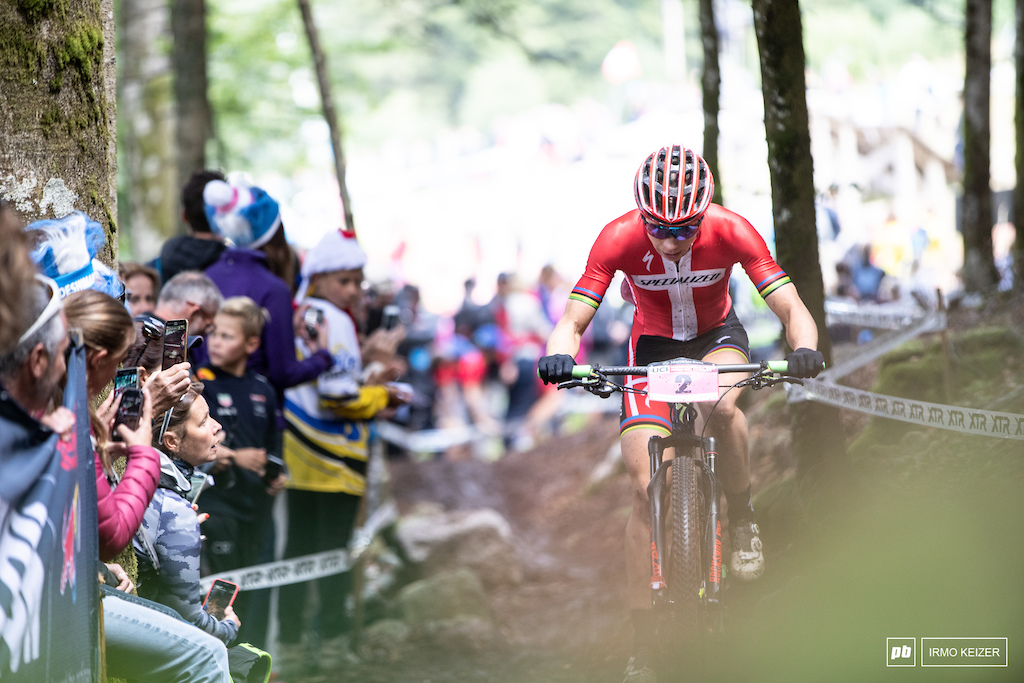 Just hours ahead of today racing Annika Langvad announced on social media that she will not be racing today.

The 2016 XC World Champion and silver medalist in last year’s World Cup overall has decided to not race after not feeling "100% race fit". Rather than pushing through to secure some points, she has taken the decision to build her strength for the next round.

This morning’s news follows last weekend’s race in Albstadt, where she also pulled out of the race after only a couple of laps. Annika has always had a strong start to the season winning the first race of the season for the past three years. This year will also mark the first time in three years that Annika won't take the win here in Nove Mesto.


400 [Failed to load instagram embed]https://instagr.am/p/Bx6lwkXpRjr&maxwidth=1000
We hope to see Annika back up to full race speed at the next round in Andorra.

Tweet
Must Read This Week
Mechanics Petition for Durability Standards & Repairable Budget Bikes
49931 views
18 Bikes That Could Be Updated in 2022
47941 views
Why Your Bike Might Have Less Travel Than Claimed
42482 views
Cam Zink Signs with Devinci
35821 views
Pinkbike Poll: Has Your Shock Ever Failed?
33278 views
Video: $1100 vs. $6500 In Upgrades On A Used Mountain Bike - Budget vs. Baller Episode 5
33158 views
Luca Shaw Joins the Canyon Cllctv
32830 views
"I Honestly Didn't Ever See Myself Leaving" - Luca Shaw on Moving from the Syndicate to the Canyon Collective Factory Team
31673 views

brownierice (May 26, 2019 at 5:13)
She just did a HUGE road season, cut home girl some slack. After a mental and physical rest break and a bit of power training she'll be back. Specialized is trying to get everything they can out of her and if she doesn't take a moment to rest and reset for the mtb she'll be wasted for the whole season. If Specialized's trainers and coaches don't realise and respect that she needs recovery time, well, they are setting her up for failure.

numshi (May 26, 2019 at 7:03)
Specialized does not supply her with trainers or coaches, this is something she does herself. As for the road side this is a privately owned team with Specialized as the technical sponsor (I.E equipment only) and the coaches and trainers for this team are supplied by Boels Dolmans

kclw (May 26, 2019 at 9:37)
Upvote. If you race long enough you are going to get it wrong at some point. Annika went outside of her comfort zone and tried something different. A bit of rest and some time on the MTB and she might be back to full speed. Or she may never hit top form again this year. Every top athletes struggles at some point in the their career.

clink83 (May 26, 2019 at 21:45)
@WhatAboutBob: not to mention if she's racing tired and unable to focus an injury could end her racing career AND her dental career.

jpwilbur9 (May 26, 2019 at 19:36)
I'm sure she wanted to race. It must have been VERY hard to pull the plug. The pressure at that level must be pretty extreme and I'm sure she has her reasons. Respect it and expect to watch her return to doing what she does best. Winning world cup races. Go Annika!

DBone95 (May 27, 2019 at 13:14)
It took more guts to pull out of the race than simply ride around in 22nd. Much respect and she's going to be a handful for Kate and Jolanda when the series returns.

WRXJim (May 26, 2019 at 23:11)
The Specialized team is a mess at the moment. Letting Courtney go, No Kulavy, No Gaze, and now no Langvad... Just playing devils advocate here... anyone else think something is fishy?

Jamminator (May 27, 2019 at 0:01)
Courtney's contract was decided before she won the World Championship last year and Gaze is racing again (started today), just not up to speed.

That said, Candice Buys probably feeling the hot seat this year. Don't forget that their Cape Epic ended in failure with Jaro/Gaze.

PapaStone (May 27, 2019 at 3:54)
Kulhavy is finished as a top tier World Cup XCO racer. Specialized should cut ties to him and spend any money saved on bringing in some younger talent. Sam Gaze could be a major player in flatter races if he can stay injury free and mentally focused.

padkinson (May 27, 2019 at 4:45)
They kind of have invested in younger talent. Alan Hathlerly, Chris Blevins, Howard Grotts and Simon Andreasson. This time next year there'll be Spesh riders on the elite male podium again.

shwinn8 (May 27, 2019 at 8:36)
better to be safe then get injured if you're sick or mind isn't in the game. Ronda Rousey getting her ass beat by Holly is proof of that
Below threshold threads are hidden

Chadimac22 (May 26, 2019 at 3:26)
@chribi: except that has zero World Cup points value. A DNF for round 1 and a DNS for round two is pretty bad... especially considering the rider that Specialized cut loose (Kate) has won both round. The Big S can’t be happy...

WAKIdesigns (May 26, 2019 at 3:30)
Yet another Athlete mentally destroyed by Specialized +Hill +Gwin +Graves

Langvad and Sauser have proven that the Epic is the most efficient xc bike out there. The spark might be lighter on paper but the Epic comes out on top everytime the race goes past 1h30min. Most ppl go for 2-3 hour mid pace rides, not 1 hour max gas - Annika is safe

tbolt88 (May 26, 2019 at 6:56)
@WhatAboutBob: So it was won like once or twice on Sparks, once or twice on Bulls and the rest I can remember on Epics.
Langvad, Sauser, and Stander (RIP) have given Spec plenty of return on their investment.

tbolt88 (May 26, 2019 at 6:58)
@clink83: Thats what the freaking marketing guys says. And ppl believe marketing guys and buy bikes based on what they say. Regardless of what you and WAKI think.

numshi (May 26, 2019 at 7:04)
@WAKIdesigns: bold statement dude, especially as its completely unfounded.

clink83 (May 26, 2019 at 7:26)
@LoveTheRide-Thunderbolt: the epic is a single pivot man, its not the most efficient bike on the market. Pivot, Giant, and santa cruz all have more efficient suspension designs. The epic isnt really any different than the Spark at this point. Its a high end race bike, but other than the brain there isnt much difference between it and the other race bikes. When I go to XC races I don't see many Epics.

tbolt88 (May 26, 2019 at 8:48)
@clink83:
Spec has been pretty big mouthed about their athletes staying on the FS Epic while contenders were choosing HTs, because the epic was that efficient - that is marketing I would say? Reminding people that your bike has won the "hardest mtb race" x times is marketing right?

I'm not here to sell Epics, I'm arguing that Langvad has done her share to sell quite a few Epics because those bikes go forward very fast when she's pedaling them.

I am not claiming that the epic is efficient, Specialized are, I've never ridden one and I don't want to, okay?

opignonlibre (May 26, 2019 at 12:00)
@LoveTheRide-Thunderbolt: It's easy to rack up win when you pay the fastest riders to ride your bike. This is unrelated to the quality of the bike. Same in world tour road races they get a lot of high profiles wins. They also sponsor 2 different world tour teams, including Deceunink QS which is a classics powerhouse + Peter Sagan's team, while other brands can only sponsor one at the maximum.

And I would say that the difference in the bikes must account to less than 1% of performance difference among all the high end bikes racing in World Cups and marathon races.

You are so naïve this is touching.

tbolt88 (May 26, 2019 at 16:33)
@opignonlibre:
Let me make myself clear, I do no myself believe that an S-works Epic FSR is the most efficient suspension design ever created on a cross-country style mountain bike!
The epic has been hyped as one of, if not the most efficient bike, it has the race results to back up that claim. I see that claim repeated on FB and forum posts almost daily. I don't think it is. But many people do think it is, and they buy it, because they believe what they are told.

Yes and they get most of their wins from the highly successful Movistar team and very little from Katusha who's roster is not as good with their main sprinter who was failing to get to his best level and no GC/classic stars. It shows this is not about the bike.