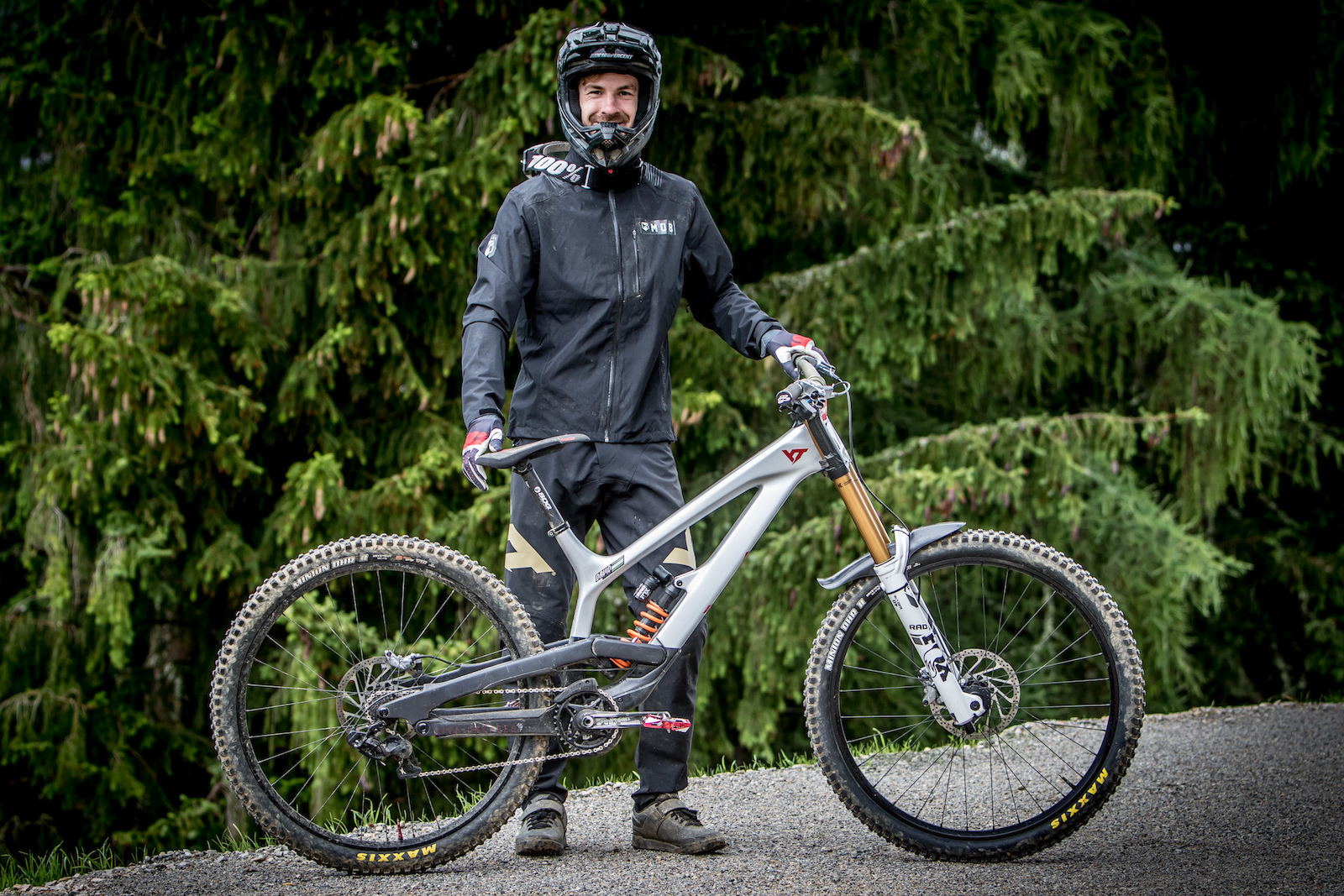 BIKE CHECK
David Trummer's
YT Tues
Photography by Ralf Hauser
2019 will always be remembered as the breakthrough season for David Trummer. With multiple top-ten results seeing him finishing the year ninth in the overall World Cup standings. He finished his year with a move from one YT-sponsored team, the YT Racing Dudes, to YT’s factory team, the Mob.

There, he’s running a standard 29” frame with one of the few adjustments in the form of a reach extend headset. And even though he can pick from any of his sponsors’ list of components, apart from his carbon frame and carbon seatpost, Trummer is clearly a fan of aluminium parts, mostly due to its damping feel on the trail compared to carbon. 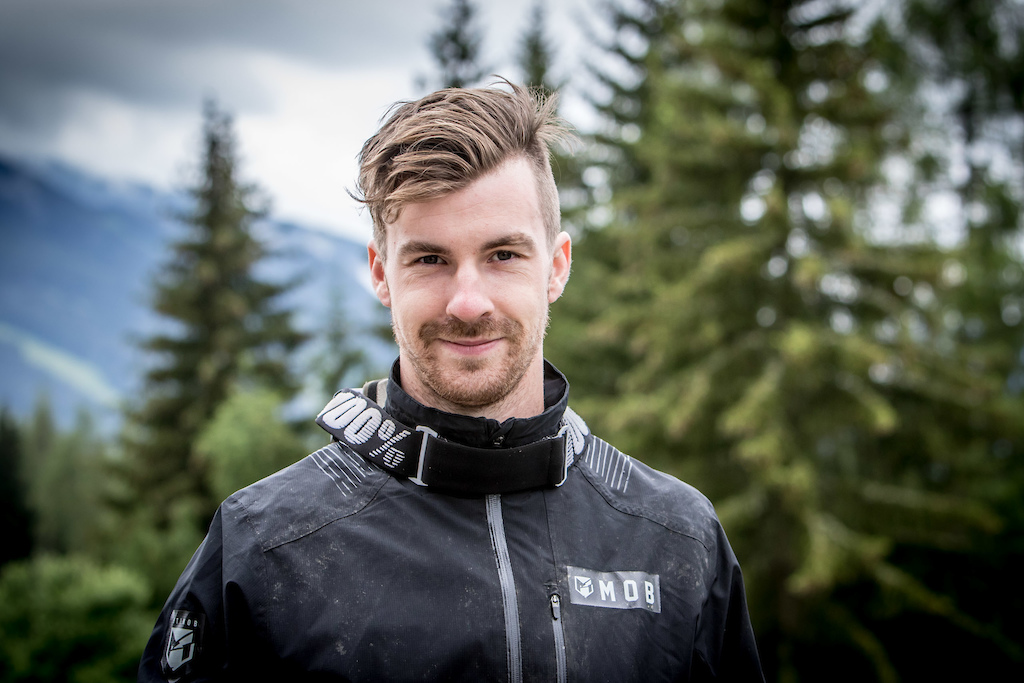 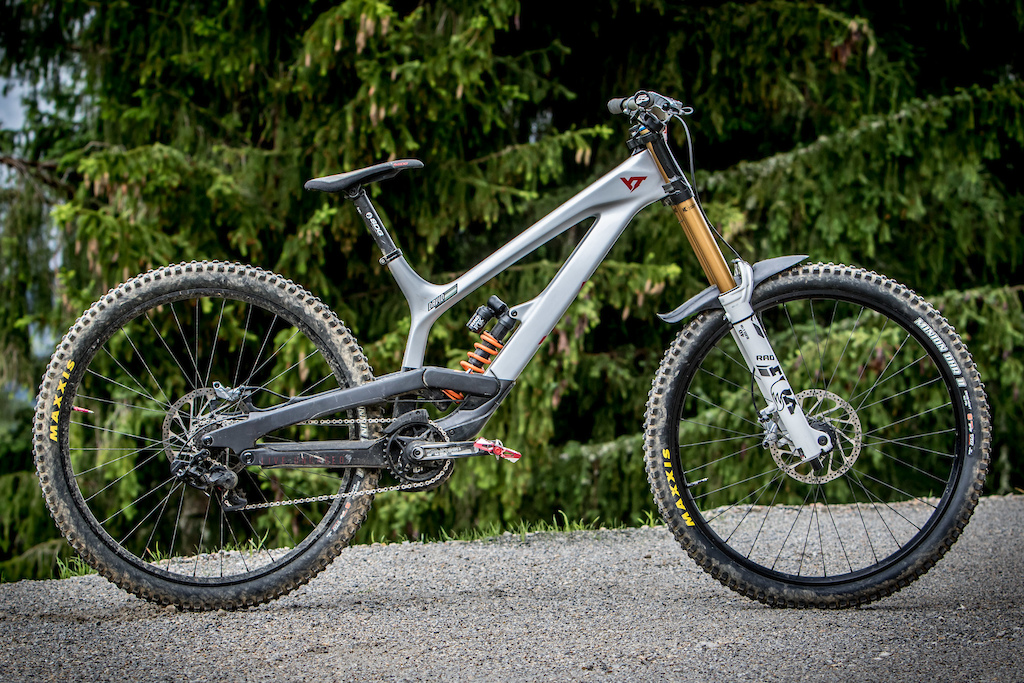 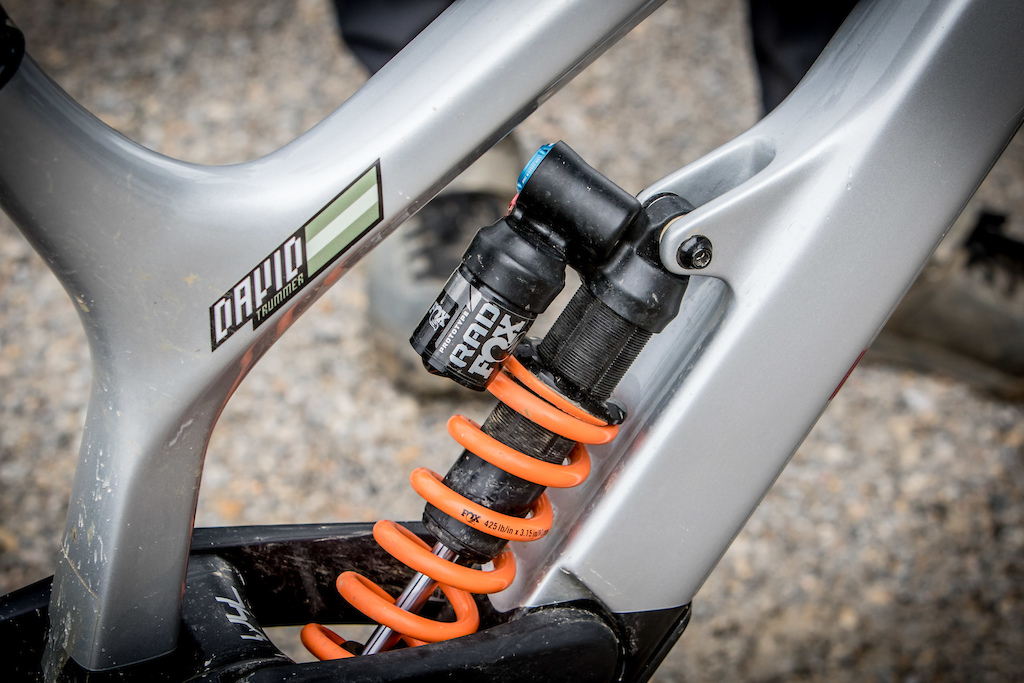 Trummer prefers the consistent feel of the coil shock’s damping characteristics over air. 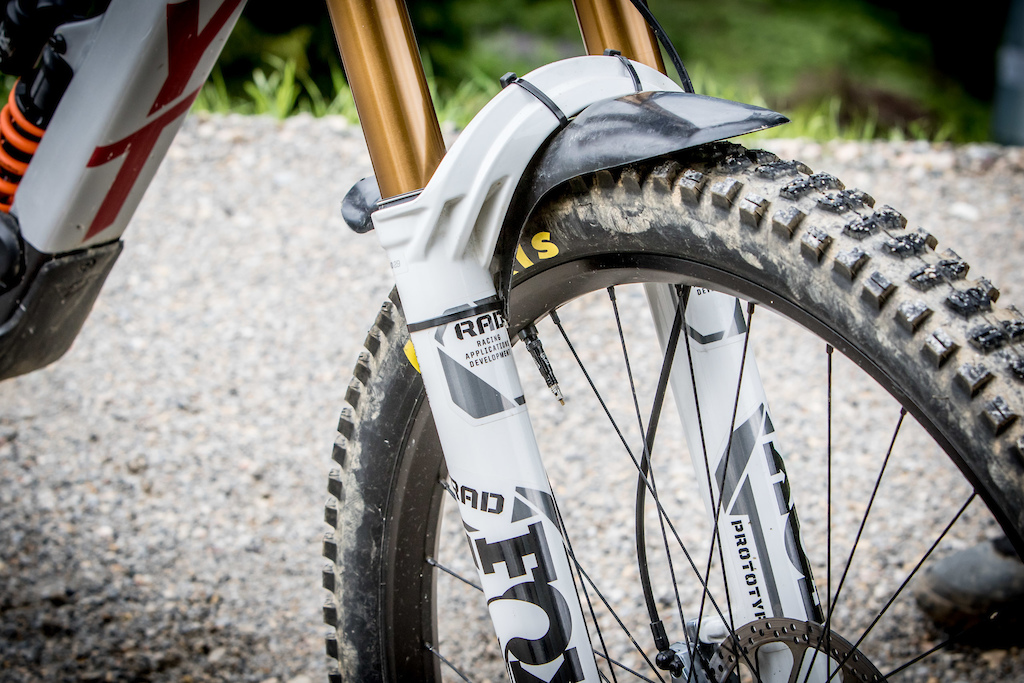 RAD prototype, five volume spacers and 90psi in the fork. 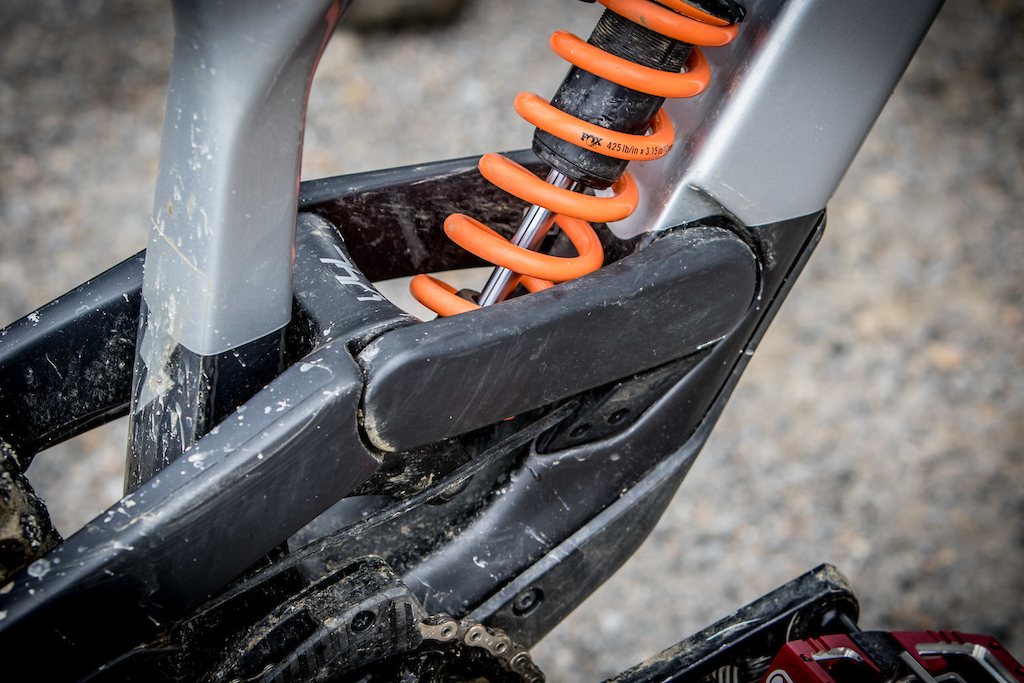 No linkage hijinks here, Trummer is running a stock 29” frame. 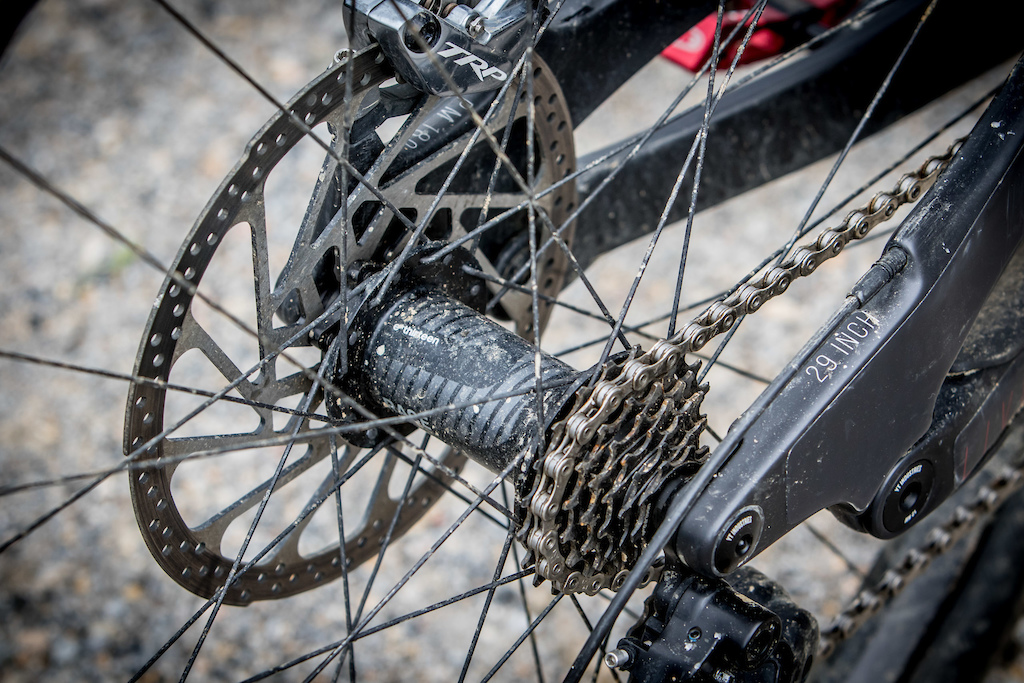 e*thirteen’s seven-speed cassette comes with a nine-tooth sprocket as the smallest cog. 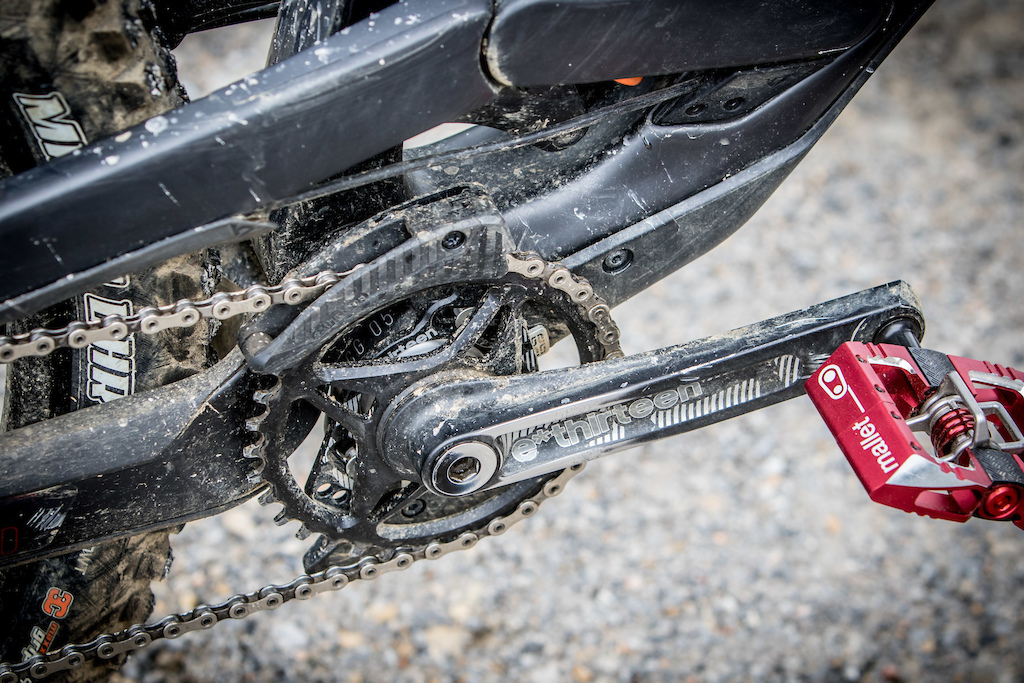 Due to the small cassette Trummer can use a smaller 34-tooth chainring at the front, making the setup more compact. Again, he picked an aluminum crank over carbon. 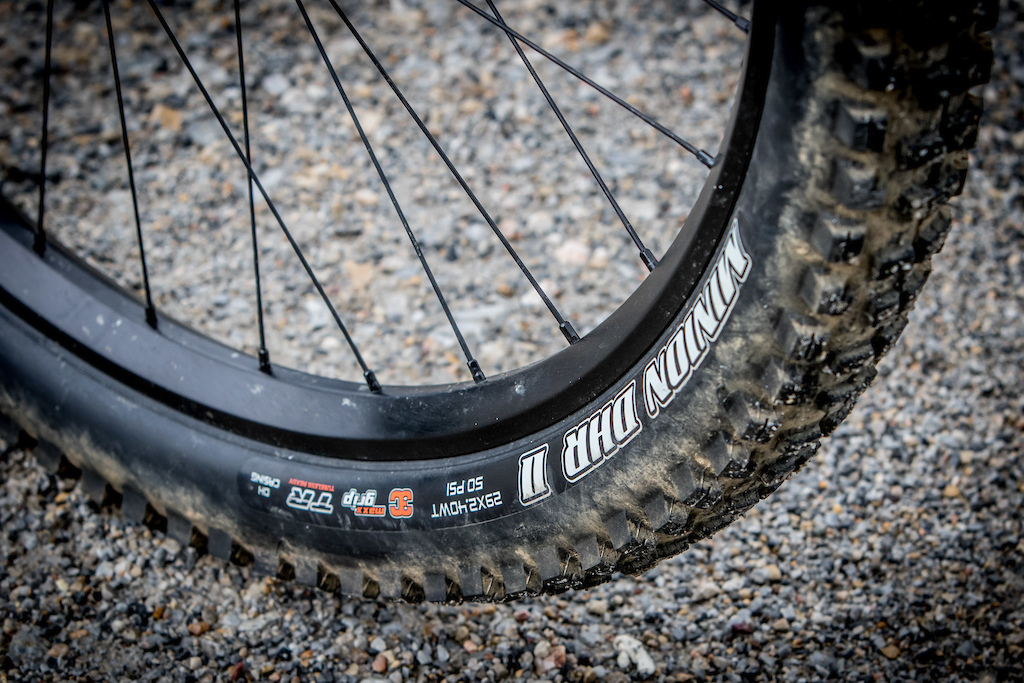 Trummer is running the Maxxis Minion DHR II front and rear without tire inserts for 99 percent of the season. Tire pressure is always set at 23psi in the front and 28 in the rear. 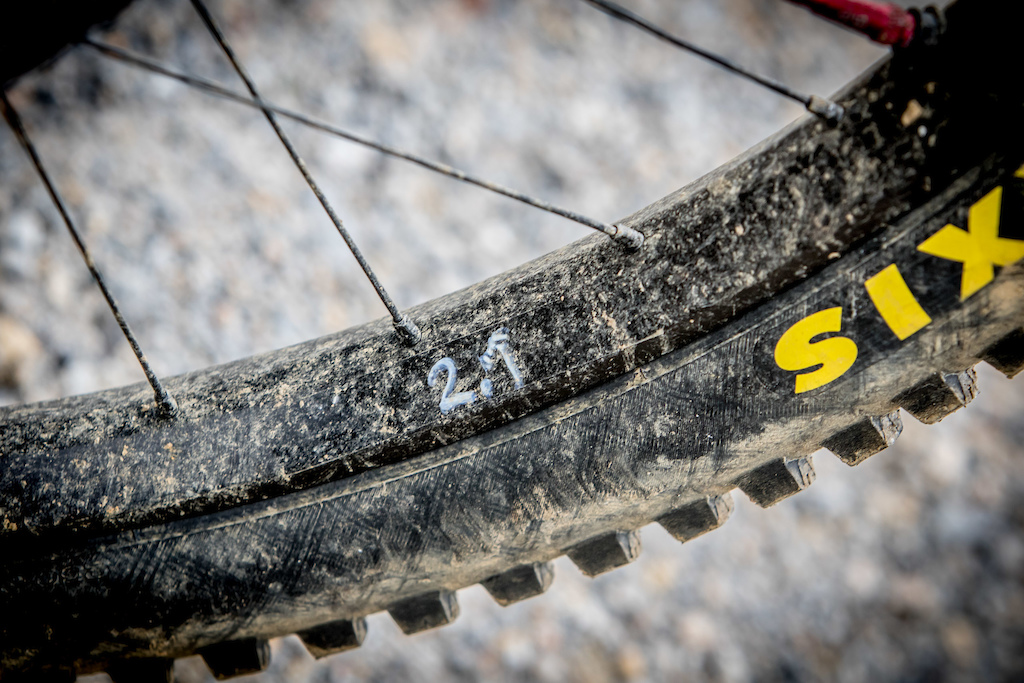 David prefers the flex of aluminum wheels over carbon. The Mob is giving feedback to e*thirteen components for developing new products. He’s still in the testing stages of some new aluminum rims that he is quite happy with. With a new structure and material strength they were able to tune the feel into a direction they liked. 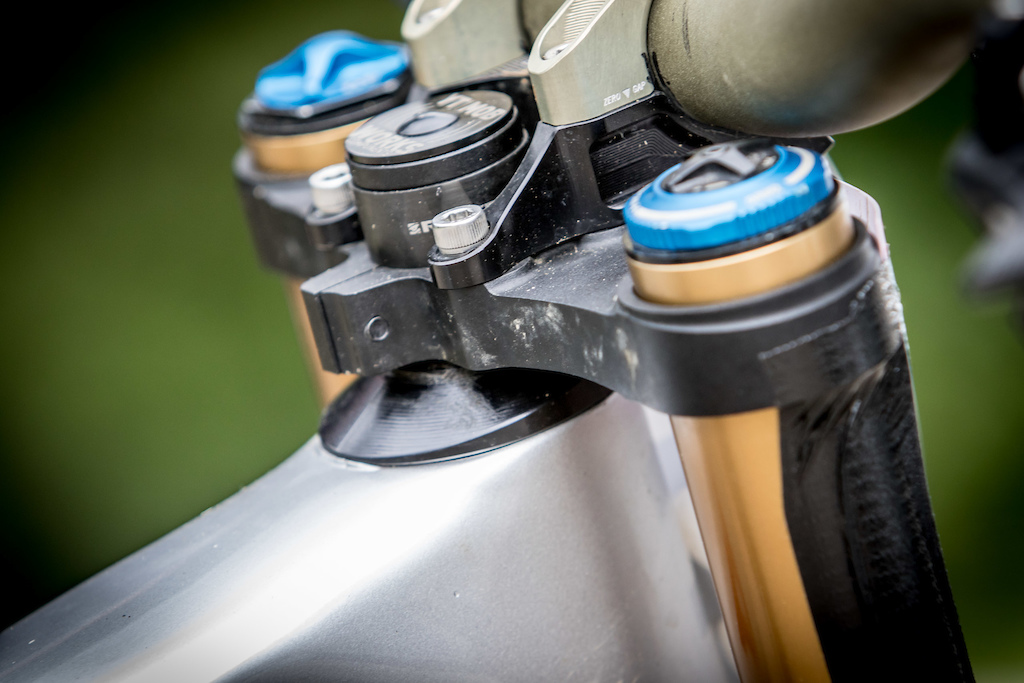 David is using a frame size long with an extra offest headset to extend the reach by 6mm, bringing it to 486mm total. 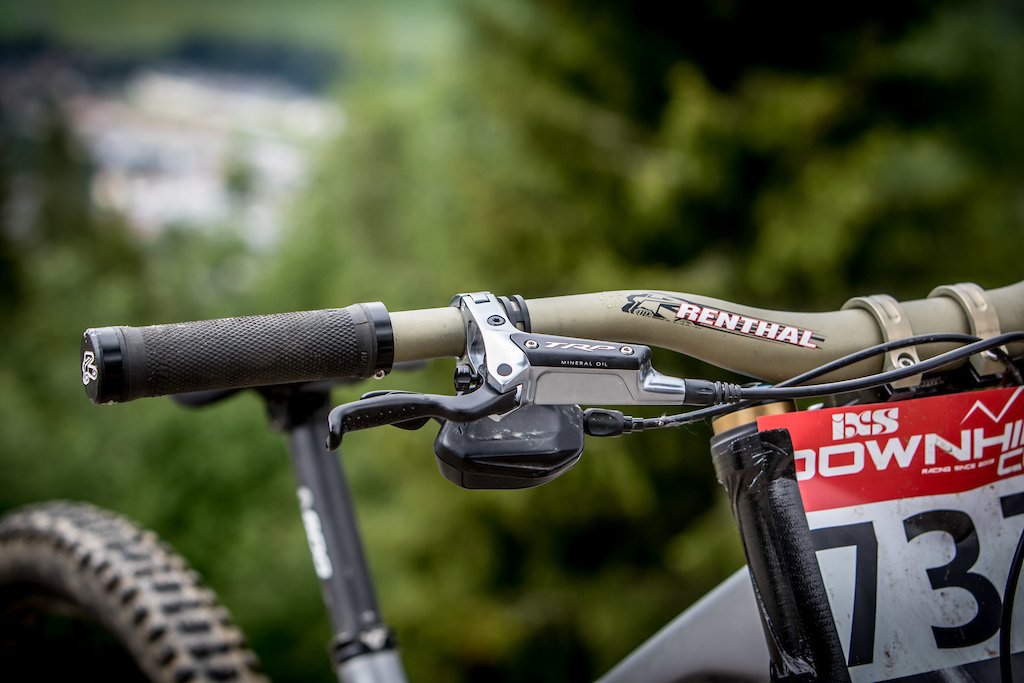 The new TRP DH-R Evo brakes are the strongest ones Trummer has ever used. Therefore he’s only using 200mm rotors front and rear, having removed the 220mm disc he got the bike with, as it was too aggressive for his liking. 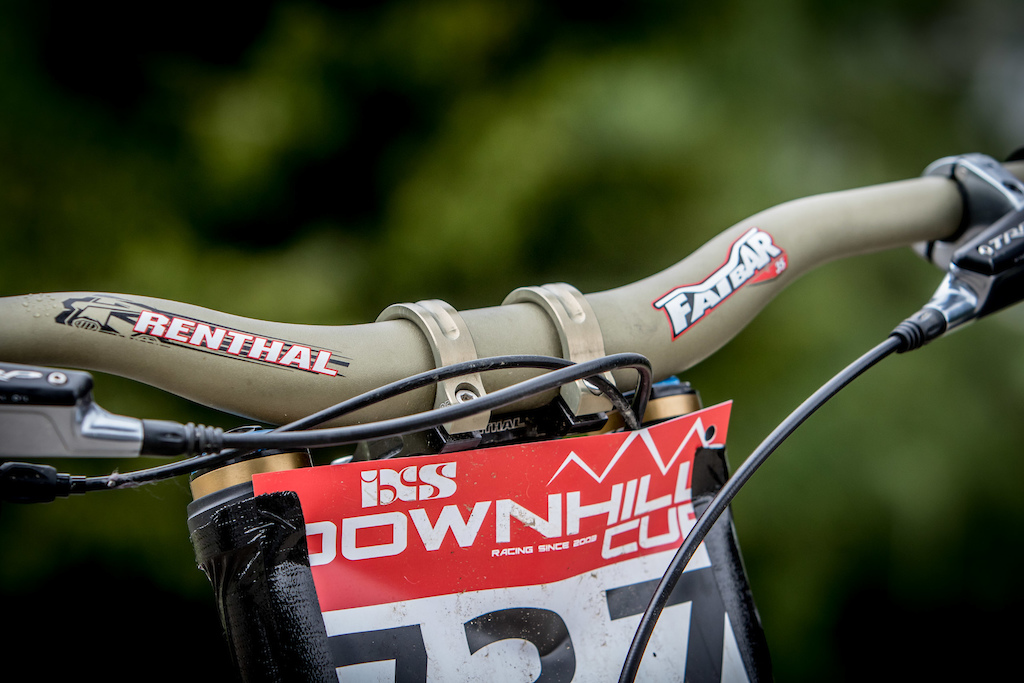 His choice of Renthal bar is ... you guessed it ... also made of aluminum. 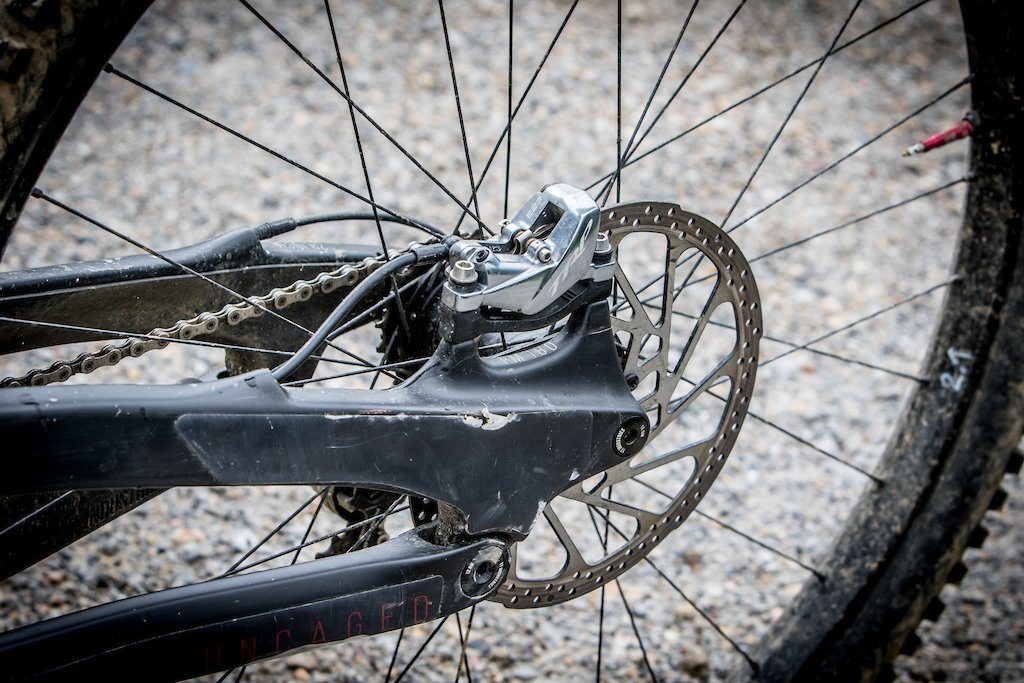 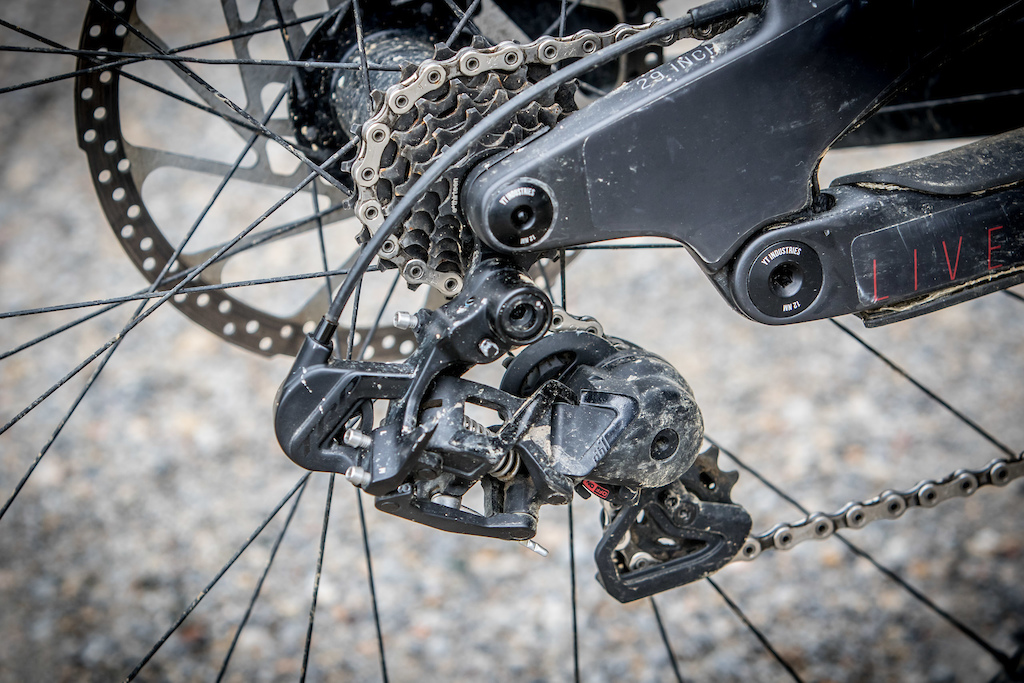 Trummer appreciates the adjustability of TRP’s G-Spec DH7 group. He played around with the clutch a bunch to find the right setting for his taste between to much chain tension and just the right amount of support.

unrooted (Jul 6, 2020 at 9:21)
I’ve ndver fully understood why they even make DH frames in carbon...I guess it makes sense for elite racers...but a pound on a dh bike doesn’t bother me.

hamncheez (Jul 6, 2020 at 9:36)
@unrooted: that pound didn't seem to bother the World Cup champion & World Champion from last year either

BiNARYBiKE (Jul 6, 2020 at 10:52)
“Trummer is clearly a fan of aluminium parts, mostly due to its damping feel on the trail compared to carbon.” Wait a second... we’ve been told the opposite is true for years, no?

sino428 (Jul 6, 2020 at 11:14)
@BiNARYBiKE: companies will tell you whatever you want to hear. Truth is it’s not the material parts are made, it’s how they are made. Aluminum can be super rigid or super damp and so can carbon. It’s all how it’s designed, not what it’s made of.

Arierep (Jul 6, 2020 at 13:40)
@unrooted: considering the current top 2 riders are on aluminium frames, I guess it doesn't matter to them either

pperini (Jul 6, 2020 at 13:46)
its not that simple...there many types of aluminium and just as many types of carbon fiber layer...the problem is that the industry tries to generalize them into one being stiffer/softer than the other...in fact both are possible...if you throw in steel into the mix then you have a real party...let alone material-mixes and structural design...its funny that on a single bike we usually get at the very least 3 types of aluminium, steel in some or many forms, magnesium, rubber/plastic/synthetics, and then in some cases carbon and/or titanium thrown into one single package (at the very least) plus many moving/adjustable parts, just to "help you out". And then you have some dude that works for some website or magazine and wants to tell you about material properties...

vinay (Jul 6, 2020 at 23:46)
You mind if I troll a little? See, a carbon bike is much much stiffer than a plastic bike, but Kevlar makes it bullet proof. Metal may be strong, but heavy. Better get an alloy bike. Keep this in mind and you'll be ready for the P!nkbikezzz.

scottyrides5 (Jul 6, 2020 at 18:40)
@YanDoroshenko: for the year is 2020.. Your shlong comment will set ablaze all the forests and dry all the seas. For the world is tossed into turmoil. Banned from pinkbike. From your comment, you will probably be let go from your job soon... We will miss you.

freeridejerk888 (Jul 6, 2020 at 13:57)
Should read “I’m a fan of the aluminum versions of my sponsors parts because the carbon ones break really easily”

Trudeez (Jul 6, 2020 at 22:51)
Absolutely! The spinsters at work. Remember when they made a world renowned mechanic say he installed the wrong cranks and that's the reason they broke?

spinster
noun
an unmarried woman, typically an older woman beyond the usual age for marriage.

Trudeez (Jul 7, 2020 at 2:04)
@koldunuk: great google skills. It also means someone who “spins” a tale (fib, or lie) or spins a story around so that it doesn’t resemble the truth. As in, Aaron Gwin broke a carbon crank, hurt his ankle, and hasn’t been the same on the bike since. Everyone was quick to point out that it was poor manufacturing And design. However John Hall came forward and said that it was, in fact his fault for installing the prior year model crank therefore taking the blame off the manufacturer. Many believed that this was a spin on the true story to try to save the manufacturers arse in the media. Especially the people who have owned, and broken cranks, and other parts, from that company. Another way to look at a spin on a story is, “Jeffrey Epstein killed himself.”

Trudeez (Jul 7, 2020 at 10:04)
@freeridejerk888: that's literally exactly what I'm wrote. Those cranks are absolute garbage. Theres no way in the world that John Hall accidentally installed the wrong (prior model) cranks, as the story goes. There was definitely something fishy about the whole story in my opinion. It seemed like e13 "spun" the whole tale to save their asses and used or convinced Hall to be the patsy in some way. And, you're completely right, why is it that none of their sponsored riders are using their carbon parts? It's not hard to figure out why.

Verbl-Kint (Jul 6, 2020 at 23:56)
They happen to be Austrian, too, and probably have the most experience riding in Schladming among all the riders in this not-a-race.

Trudeez (Jul 6, 2020 at 22:44)
Haven't we been sold, for idk the last 20 years, that carbon has superior vibration dampening characteristics and now they're saying aluminum is better?? What gives?

bok-CZ (Jul 6, 2020 at 11:09)
Well faster with better traction when theres a hardpack close enough underneath

Mondbiker (Jul 6, 2020 at 9:50)
@M-SC: No it´s got all to do with clutch tension messing up with suspension performance when being too high, just like worn bearings in rear triangle would.