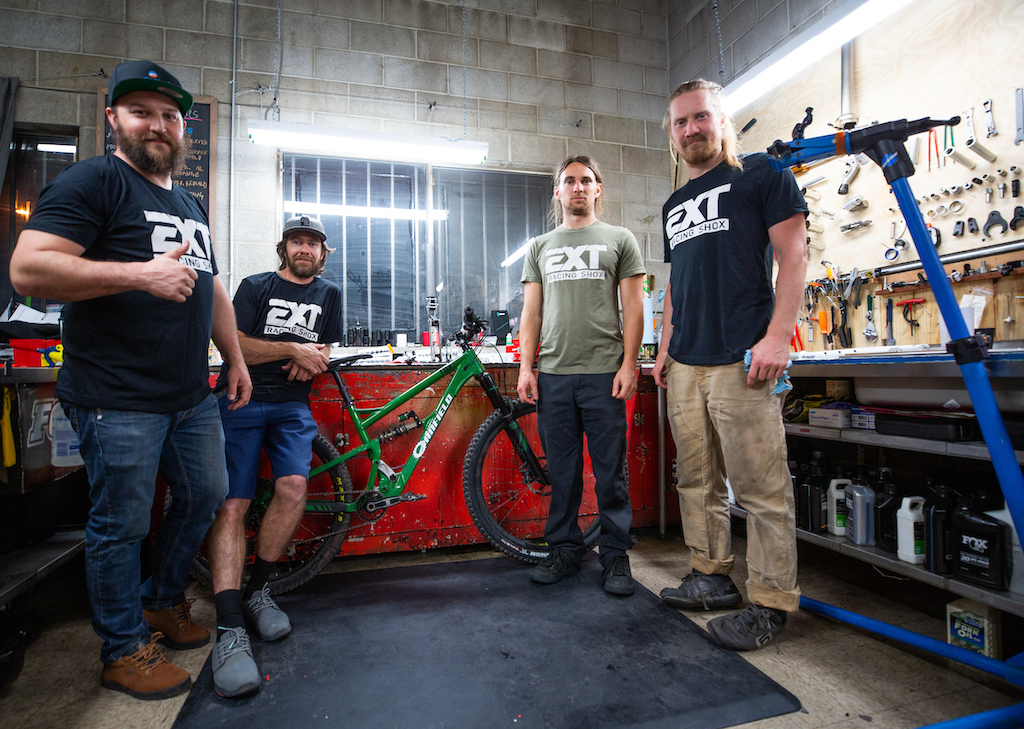 
The one-of-a-kind Canfield Bikes Tilt prototype that was stolen last Friday, April 2 in Salt Lake City, UT, has been recovered.

As of Wednesday, April 7, the bike is back in the possession of EXT-USA. The bike was recovered in excellent condition, and EXT-USA is able to complete testing and tuning for the Storia and Arma coil shocks that will be available on both Tilt and Lithium frames. 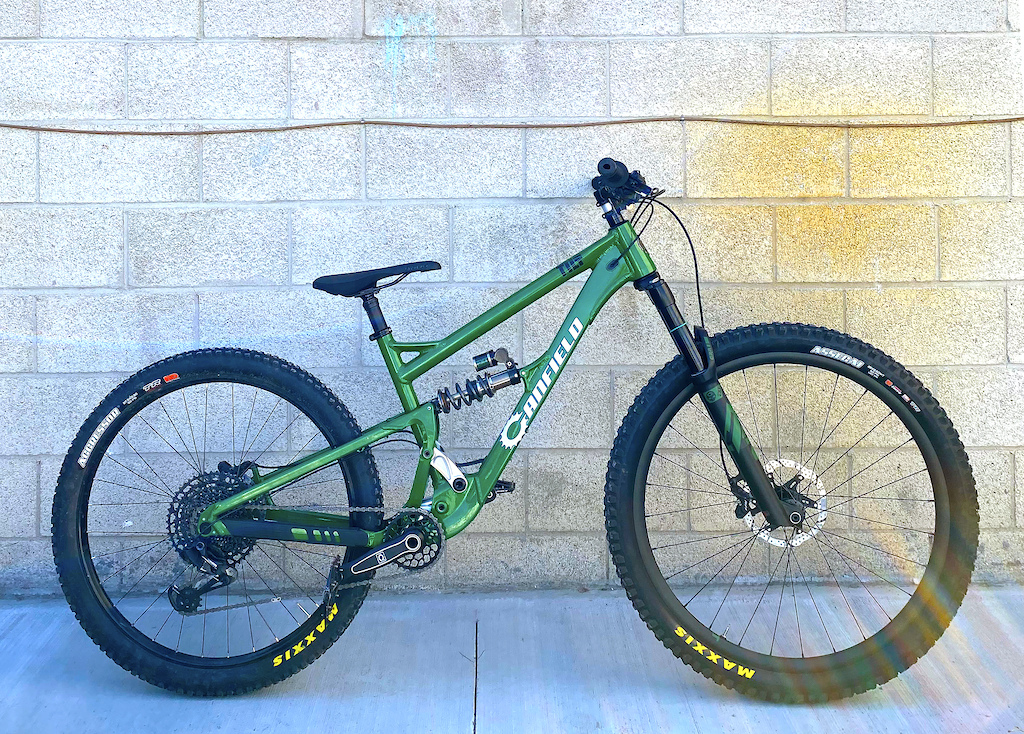 Canfield Bikes received several leads and reports of sightings of the bike thanks to the Utah mountain bike community. On the evening of April 6, someone contacted Canfield claiming to have the stolen bike in their possession. The bike was recovered the next day by EXT-USA employees within blocks from the site where the theft occurred just five days earlier.

No further details are being released at this time because an active investigation of the incident and persons of interest by the Salt Lake Police Department is still pending.

Branmuffin (Apr 10, 2021 at 4:12)
Am I interpreting this correctly that someone, who probably read the article stole the bike back from the thieves and turned it back over to EXT?

I am here for the street justice.

@Branmuffin: Love me some street justice!

The punk scene is alive and well, however.

ReformedRoadie (Apr 10, 2021 at 10:49)
@BEERandSPOKES: Some times these things take time. OJ is still out there looking for the real killer...who apparently is a golfer.

k2rider1964 (Apr 10, 2021 at 12:18)
@BEERandSPOKES: Your bikes are important to YOU and I get it but in the grand scheme of things, they are no more important that a sack of marbles stolen from a 10 year old. Bikes thefts are not even investigated unless there is some quality evidence and then depending on the municipality, maybe not even then if you have an activist District Attorney that refuses to prosecute these type of crimes.

moejoe33 (Apr 13, 2021 at 20:47)
@gnarlysipes: This is very close to a "Juicy" Smollett (minus the Nigerians). This did get a lot of press coverage, not only in the cycling world but local news as well.
Think about it... a stop at a "convenient" store (convenient, as in EASY ACCESS)... supposedly locked (doubt it)... I was certain this bike was a goner. Low and behold...

gnarlysipes (Apr 14, 2021 at 8:39)
@moejoe33: Possible. This would make for a good short film where you see two retellings of the same event. Kind of like those cut scenes in MI:1 (the original and the best). But, knowing the area and the city, im not surprised they recovered it. These poor homeless people are often struggling with mental health challenges and some don’t know up from down. So it’s possible the guy took it without a thought of selling it or hiding it. Maybe he just needed a mode of transport.

m1dg3t (Apr 14, 2021 at 8:58)
@wibblywobbly: Property crimes are low on the to do list because they are, more often than not, under $10k and victimless. Obviously if I hit you on the head while your riding your bike, and take your bike, the police will give that more attention because of the violence.

Plus it's easier/more profitable to hand out tickets/citations.

“We are glad that perpetrator Mike Levy was brought to Justice. Given their heinous paparazzi methods of hunting prototype spy shots, we are not surprised that they only escalated the issue and went to extents such as actually stealing a prototype”

This is @justwaki. A really nice guy who's unopinionated unlike the other guy :-)

SimbaandHiggins (Apr 10, 2021 at 13:54)
@pakleni: Yes, and he has tattoos too. Very suspicious and mischievous looking fella!

justwaki (Apr 11, 2021 at 14:48)
@POWsLAYER: erm... 90% of situations where someone uses a smart phone, most cases of using social media social media, watching Netflix, riding a mountain bike, working out in the gym - all examples of compulsive behavior. I missed you too, your anger

But frankly I am already disgusted with it... I sense how much better off I am without SM. Particularly interaction with folks on SM. I’d delete it all. But damn it works like a photo album...

Nothing comes for free...

coachphillip (May 1, 2021 at 20:20)
@POWsLAYER: Please be aware I will continue to call you out on every post you make for being a thief until you follow through on your half of the trade.

ninjatarian (Apr 10, 2021 at 4:38)
Interesting guerrilla marketing tactic, if so, although filing a false police report is a crime (unless they made that part up too)

I spent all those minutes scouring Craigslist for nothing?

mi-bike (Apr 10, 2021 at 5:00)
@ninjatarian: the original article only stated that "Local authorities have been notified," which is clearly short of filing a police report. Thus, if this was a marketing stunt, no crime was committed

justwaki (Apr 10, 2021 at 14:32)
I think Atherton Bike would have had the best marketing strategy, "it's the best bike, we have an F1 engineer and a dragon on board, we use many drones to film how Dan wants to kill Gee by building whackiest lines and...
YOU CAN'T BUY IT, NO MATTER HOW RICH YOU ARE!!!".

But they didn't factor in Covid and Ever Given so now you can't buy any bike no matter how rich you are, even a Canyon.

ReformedRoadie (Apr 11, 2021 at 12:22)
@curendero: Certainly not big city professional bike thieves...
Kinda odd all the circumstances all around,
Ended cleaner and tidier than an episode of Scooby Do.

RonSauce (Apr 10, 2021 at 4:30)
Mandatory finish on the mega avalanche riding a gravel bike. Marketing says he will have more fun than any other rider, reality says he will be pounded to dust.

constantly-broken (Apr 10, 2021 at 6:38)
Whilst riding a fixed gear 10" kids bike with plastic wheels, stitched rubber tyres and wearing a Barney the Dinosaur outfit

vandall (Apr 10, 2021 at 9:11)
Back in the 90's when I was a bike messenger in SLC I had my bike stolen. 3 months later I see a guy riding it. I chased him down and he wouldn't stop. Because I was a bike messenger I had one of those old Motorola brick phones and I called the police as I continued to chase him through the city. The guy was twice my size but I wasn't going to give up. Eventually, the guy got tired and with the police on the phone he gave me back my bike. The police never showed up but I rode away with my old bike on my shoulder.

Richridesmtb (Apr 10, 2021 at 14:30)
I had my bike stolen from my house back in about 2004. I filed a report with the police and realised it was going nowhere, so I dropped off a flyer to all the local bike shops in the nearby suburbs. I had written it off when I got a phone call from the bike shop literally one block away around the corner. They asked me what pedals I had on the bike and sure enough it was my bike. Someone had brought it in for a service and apparently he'd received the bike as payment for a plastering job. I paid for the service and thanked the staff for being awesome. They said they would follow up with the police but I never heard anything more of it.

JDFF (Apr 10, 2021 at 7:02)
Thief got dehydrated during epic urban bike on bike chase and couldn't out pace the do-gooders. (No water bottle)

Sirios (Apr 10, 2021 at 22:50)
This becomes more unbelievable everyday. Even crappy bikes rarely if ever get returned , let alone a fancy prototype . if a REAL bike thief had stolen that bike it would have been taken out of the area almost immediately and sold intact or for parts.

Crankhed (Apr 11, 2021 at 12:25)
It needs an oval ring to go w/ the oval wheelset
Maybe thaaaats why they couldn’t catch the guy.
Aside from the “ride it like you stole it “attitude the thief probably had.
Hmmm?
Oval ?
Roval?
Hold my beer!

jgottya1 (Apr 9, 2021 at 20:06)
Excellent news to see!! Surely the theive didnt get what they deserve, but hopefully at least got some warm slap on the bad wrist.

drjohn (Apr 10, 2021 at 4:50)
Haha I am wondering if the thief himself saw the pinkbike article and knew he couldn’t really get away with it. So he turned the bike in. (Don’t know if he would have the guts to turn himself in).

sino428 (Apr 10, 2021 at 6:02)
That could have happened but more likely someone would just ditch the bike somewhere rather than try to turn it in.

SterlingArcher (Apr 10, 2021 at 9:47)
Theif wasn’t satisfied with the head angle and chainstay length. Prevented him from doing cutties while evading authorities.

matthellstream (Apr 10, 2021 at 9:09)
Thanks to the thief for being stupid enough, or drug addled, to keep the original paint and ride around the part of town where the bike was stolen.

justwaki (Apr 10, 2021 at 11:59) (Below Threshold)
Bike thief... it sounds a bit too professional Gives them credit which they don’t deserve. People who steal bikes or break into cellars/garages are rarely sharpest tools in the shed... my buddy was dumb enough to leave the Commie Meta locked in common bike room. He found it few montha later, lying in the bushes next to his block of flats - with flat tire and blown out shock. Scumbag who stole it surely did something to the shock, then rode for a few days, got a flat and left it.

Whenever I see a thief checking out bike stands I can’t decide whether I hate him or pity him. 9/10 dude looks like he’s a hungry homeless. But 1/10 they look like piece of crap one would like treat with cyclone b for the good of everyone in the world. One shtface in my town owns a bike workshop and hangs around with these 1/10 low lives. They... they attract each othwr

AndrewHornor (Apr 10, 2021 at 8:07)
I think there's something funny about the picture because the wheels don't look round.

yabbaDABdo (Apr 10, 2021 at 10:39)
Iam reading into this , But this is why ext-USA handles all my suspension work. They might fight for your stuff. Good job.

TARTARA (Apr 11, 2021 at 1:06)
This tactic is very well known:
1st: They create the problem!
2nd: They inform you about what happened!
3rd: They announce to you that they
are/have the solution for the problem!
Very well known company, used this same tactic to present a new signature bmx model!

glades (Apr 10, 2021 at 8:24)
Sounds like a great marketing job by Canfield.......bike stolen while left unattended on back of vehicle and then recovered by someone contacting them.....strange but this has given them great exposure for free.....just saying......