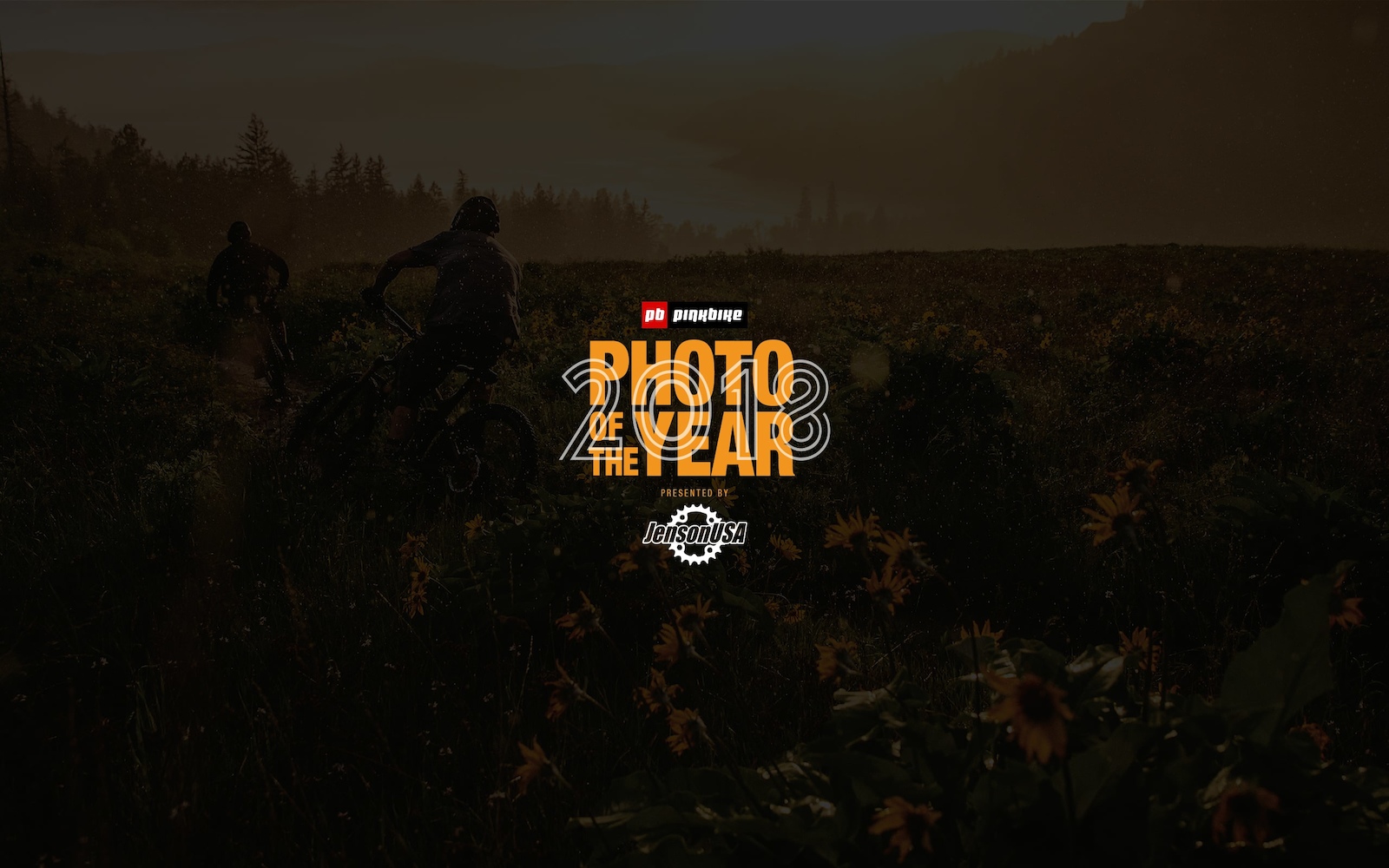 There is $10,000 USD in cash on the line in the 2018 Photo of the Year Powered by Jenson USA, so get ready to nominate your favourite pictures.

What's at stake? $10,000 USD Cash
The 8th annual Pinkbike Photo of the Year Contest is coming fast. The winner will join Steve Shannon, John Wellburn, Toby Cowley, Sterling Lorence, Christoph Laue, Sean Lee, and Robb Thompson in the PB Photo of the Year Hall of Fame and they could walk away with some serious cash.

Think you have a banger? This is your chance to see how you stack up against the best mountain bike photographers in the world. Any images uploaded during 2018, or up until Friday, February 22nd, 2019, can be nominated. You can nominate up to three photos of your own, or from other photographers, for entry into the competition. Last year over 375,000 votes were cast until ultimately one image came out on top.

You have until Friday, February 22nd, 2019 at 9am PST to nominate your favourite shots.

How Does it Work?
All photos taken and uploaded to Pinkbike during 2018 and before Friday, February 22nd, 2019 that are nominated by users are eligible. Each Pinkbike user can nominate up to 3 different photos into the contest (see how to nominate below). The judges will then spend several sleepless nights narrowing the nominated photos down to 32, after which we will open things up to the public. We will pit each photo randomly against another photo in a college basketball bracket-like showdown. At this point, users will vote on the match ups and the photo with the most votes will move onto the next round. So 32 photos will narrow down to 16, then 8, 4, 2 until there is a single photo deemed 2018 Pinkbike Photo of the Year.

The winner that is chosen by you, the readers, will receive a cheque thanks to Jenson USA, as well as the title of 2018 Pinkbike Photo of the Year. 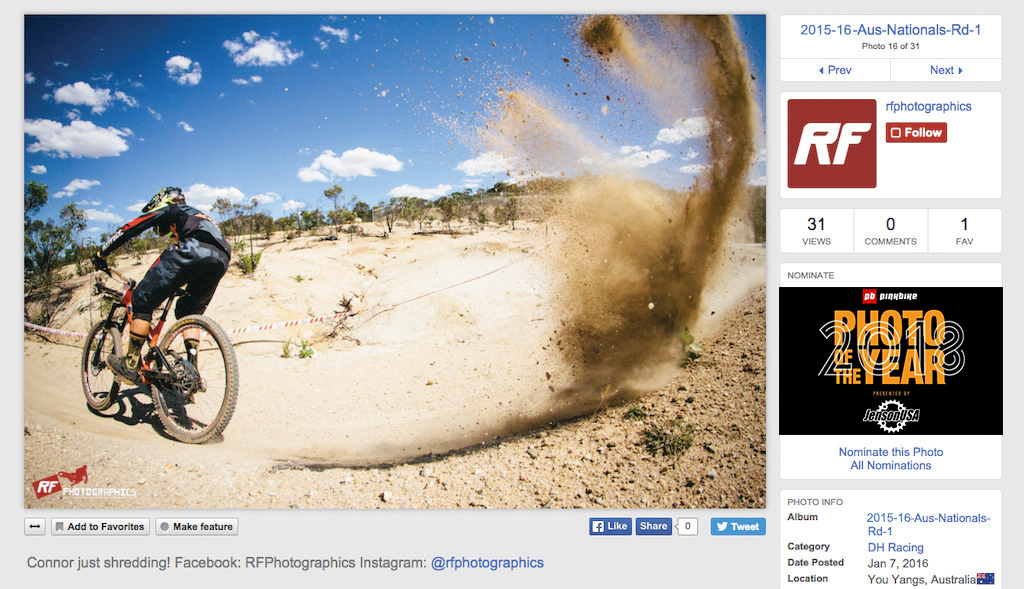 Photos can be nominated by any user by clicking the 'Nominate this Photo' link. All nominated photos will then be viewed by the panel of judges and narrowed down to 32.
Rules
• Everyone is eligible except for judges
• Only one photo can be selected from each photographer into the final 32
• You must be the photographer who took the photo and then have uploaded it onto your personal Pinkbike account to be eligible
• Nominations close, Friday, February 22nd, 2019 at 9am PST.

Full rules and regulations can be found here.

dreamlink87 (Feb 20, 2019 at 6:21)
@kbonesddeuce: The prerequisite for a berm explosion pic should be an actual explosion.

rocky-mtn-gman (Feb 15, 2019 at 4:17)
time to re-nominate that racing photo from last yrs contest of gwin sideways scrubbin' that jump with his 'looking 2 miles down the track' death eyes...

jeffakalucas (Feb 15, 2019 at 18:17)
Has been the wallpaper on my laptop and work computer since it was posted! Unbelievable photo!

theperfectline (Feb 15, 2019 at 23:32)
@brianpark: See I dunno - I get the determination in the eyes, speed, colours, it's Gwin & he won that world champs but personally I find it way too cluttered - especially the nasty orange fence pegs. I guess that's why it's a mass vote

Airik (Feb 15, 2019 at 5:27)
That time of the year to make the roaster and then get kicked out by a roast or silhouette shot in the first round. Yeaaah

daweil (Feb 19, 2019 at 23:51)
I know the rules are already set as stated in the article, but I would've loved a system different to the "tournament"-style.. E.g. everybody sorts the 32 photos from most to least liked and then each round the bottom half gets cut off.
Of course ist not as "exciting", but the last years it hurt so much having to vote from one of two photos which the eyes of many both could have won.. just to have the everlasting bermroost appearing in the final decision.

sheepstar (Feb 15, 2019 at 11:48)
I'm a photographer but I never shoot mountain bikes. If anyone in the BC area wants photos taken DM me, I'd love to expand my skill set. All the top 32 shots in these are fantastic!

tacklingdummy (Feb 21, 2019 at 20:38)
To me, the best photo last year was the photo of Sam Hill racing at the EWS La Thuile with the helicopter in the background.

crysvb (Feb 16, 2019 at 10:17)
How do photos even get noticed? I've taken some bangers and they never get any views? So confused with pinkbike

There's still snow in the mountains!

kabanosipyvo (Feb 15, 2019 at 19:23)
Don't bother entering. Only pros or industry insiders ever win this. Contrary to what is suggested, this contest does NOT have a track record of uncovering new talent.

crysvb (Feb 19, 2019 at 13:05)
surprisingly I have three photos that are up on the first and second page and I'm definitely not a professional. If they hold up until Friday I'm going to be super pumped!

Still frame of that should win. Wrong sport, but doesn't matter.

samslichter (Feb 15, 2019 at 1:27)
Kinda sucks that the contest is right now, considering snow is on the ground for a lot of people