The obvious question is why Salsa chose Weagle's Split Pivot system over his highly regarded dw-link. While there are likely a few reasons for the decision, the main point boils down to the absolute exacting tolerances required by the dw-link design to have it function as intended - Weagle told us that having a pivot location only slightly out of place (we're talking millimeters) can have an adverse effect on its performance. This is less of an issue when producing carbon frames that are created using an expensive mold, thereby ensuring relative perfection for every one manufactured, but much more of a challenge when welding up a completely new frame design. Koski also told us that the bike's single pivot/Split Pivot layout ticked all the boxes in regards to what they were aiming to achieve with the new bike, while also allowing the new Horsethief's lines to follow the original bike's shape, with a rather traditional silhouette that can accept a large-sized water bottle. 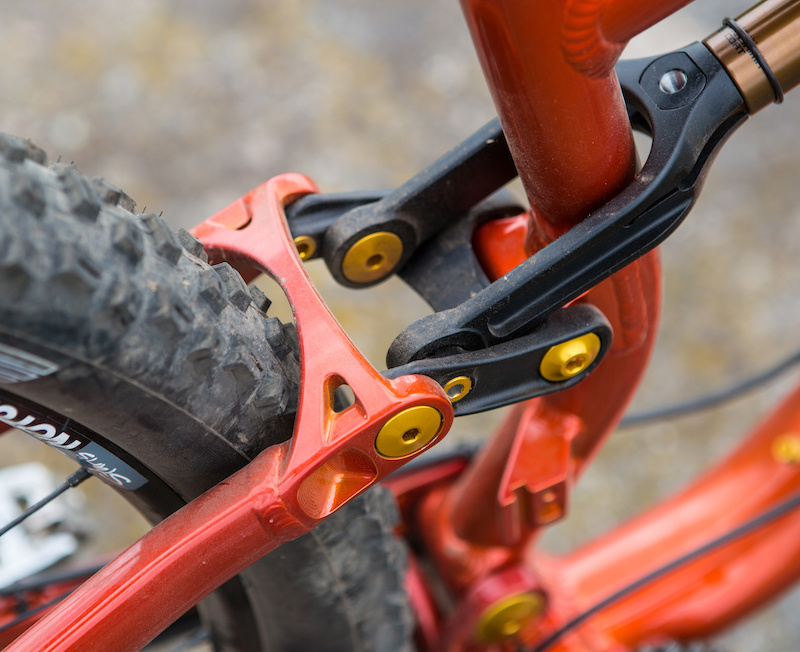 The Split Pivot moniker refers to the bike's rear dropout pivot that rotates concentrically around the axle, with the brake caliper mounted close to the pivot in order to limit its effect on the suspension when the rider is on the binders. Weagle also says that the layout allows him to separate different performance elements during the design process, with the active nature letting him place the bike's main pivot in a location that makes the most sense for acceleration and efficiency purposes, an important note on a 120mm travel bike that has been designed to take riders out on all-day escapades that are true to Salsa's ''Adventure by bike'' motto.

One of the main design goals that Weagle and Koski kept in mind during the revised Horsethief's development was the desire to improve square edge suspension performance, a vital component to creating a bike that not only descends well but that can also maintain traction on tricky climbs, while also not sacrificing cornering performance with a rear end that wants to gobble its travel when compressed mid-corner. That last point is important in order to preserve a bike's handling, with unwanted suspension compression both slacking out a bike's steering angle and also bringing the pedals dangerously close to the ground. The Horsethief's
FOX shock features less low-speed compression damping that what you'd find on other designs, but this is coupled with a higher leverage ratio in the early stages of the bike's travel that helps to hold it up in its stroke. While the original Horsethief did make use of a small link that added rigidity, the new model uses a much more robust looking linkage arrangement that makes for a sturdier looking rear end. The split shock yoke that encircles the bike's seat tube accepts a standard FOX shock eyelet, with no special fitment required.

We've been fans of Weagle's previous Split Pivot creations that we've spent time on in the past, with their peppy nature and active braking offering a fun level that makes them a joy to attack trails aboard. It is for this reason that we weren't surprised by the Horsethief's energetic personality. While bikes with less travel than the Horsethief are often satisfactorily efficient simply because of their firm suspension, the 120mm travel bracket can see some real variances in this aspect of performance, with some bikes requiring ample use of their shock's pedal assist feature if the rider is looking to really attack. The new Horsethief doesn't fall into that category, though, with us never feeling the need to flip the bike's FOX CTD shock out of its comparatively supple 'Descend' mode.

We spent time on the bike while covering some natural, rocky terrain, as well as on Spirit Mountain's berm-filled Candyland trail, with the bike offering a great sense of its capabilities at both locations. It obviously excelled and felt more at home while on Duluth's cross-country loops, but we were surprised at how easily it carved the tight bermed corners at Spirit Mountain, feeling very unlike some other big-wheelers that we've thrown around on the jump lines.

While we were impressed with how the 120mm travel Salsa pedalled, it was the bike's lack of required setup time that really had us smiling. Sampling different machines on a never ending basis means that we can be ultra-sensitive when it comes to suspension setup, and this can often leave us tinkering non-stop during a ride while we look for that ever elusive "ideal feel" from the bike. The Horsethief asked nothing in this regard, with our setup time beginning and ending with quick sag and rebound adjustments that we ended up being happy with, save a small on-trail air pressure tweak - the fact that we felt so comfortable so quickly on the Horsethief speaks volumes for its adeptness in our minds. And even though we admit to enjoying tuning an unfamiliar bike into a package that feels like home, a machine that the average consumer can jump aboard and benefit from without having to do just that is worth its weight in gold.

guitarguy84 (Jul 16, 2013 at 2:57)
And on that note, thank you Pinkbike for continuing to post great content, regardless of the narrow-mindedness of most of your readers.

flowyridestilltherestofmylife (Jul 16, 2013 at 21:53)
Looks like Spec Stumpjumper.. According to rear shock mount and pivot design.

tjet (Jul 17, 2013 at 7:28)
...and what's wrong with basing a design on another proven successful design? My fuji Outland's triangle was made by Specialized, looks like this one, it's been shredding for more than 2 years, and still going...

but not a big fan of the shock mount.

groghunter (Jul 16, 2013 at 7:15)
No doubt, the fact that most people think about salsa as a frame company, instead of a skewer company, makes me feel old.

Saidrick (Jul 16, 2013 at 9:37)
Actually Salsa was a frame company years ago too. My first mtb had Salsa bar ends. They also started out in my home town, Petaluma CA. Also the home of Soul Craft bikes

ObyGobyWanoby (Jul 16, 2013 at 13:10) (Below Threshold)
Whoa, more 29er riders than I thought on pinkbike... calm down guys, its a line from a hilarious song that you've probably all seen. www.youtube.com/watch?v=QyTyjQbvylg ... minute 2:08

jacque-lucque (Jul 16, 2013 at 3:00)
Salsa are a well established and pretty excellent brand. It's genuinely surprising so few have heard of them on pinkbike.

This is the local chapter trying to make it happen...

There are a few vids on here from the launch that slightly touch on the subject.

zerocoolxx (Jul 16, 2013 at 8:19)
I personally find that Salsa does not get enough coverage for their great bikes. This bike looks like a great step forward in the right direction for the company. Regardless of the 29'er status, their bikes do well in most situations, and their frames can deal with the punishment. I personally think even the color is pretty legit, and of course, they keep releasing with very unique names.

AlexFrey (Jul 16, 2013 at 8:49)
They still never say anything bad. How am i supposed to know whats really good and not. Maybe introduce a scoring system?

mrgonzo (Jul 16, 2013 at 9:39)
maybe there's nothing bad about it? if you spent months designing and spec'ing a bike would you put it on the market if there was a problem with it? it may be inferior relative to other bikes in certain situations but looks like for the trails that they tested it on, and design-wise, it was good to go.

HairyLegs (Jun 7, 2014 at 9:38)
Mmmmmm...... hello Horse thief, that bike looks great in the Bad Asss Orange. Been through a couple of Reviews now of this bike and all seem to be very positive. It has me thinking I need to try one out

Jeromev (Jul 16, 2013 at 11:04)
Looks really good. I'm in the market for a 29er trail bike. I was pretty much set on the Santa Cruz Tallboy, thanks for throwing a wrench into that. Hahahaha

cglasford (Jul 17, 2013 at 4:34)
where in MN do you live? There are Salsa's in almost all bike shops in the Twin Cities as well as the shops in St Cloud and Duluth. Actually since it is owned by QBP any shop that deals with QBP can get them in.

freestyIAM (Jul 16, 2013 at 10:59)
Agreed. The front triangle has almost the exact same silhouette as the new 29r stumpjumpers; even the shock links on the rear triangle look almost identical (except that its not a proprietary shock mount). The only dif is that the pivot is not placed on the chain stay but at the point where chain stay and seat stay meet. Not saying Salsa has copied big S or anything, that one difference is huge, but the bikes look very similar. What is funny to me is that the FSR patent just expired but this bike doesn't use it but looks like a stumpjumper in almost every other way. Seat and HT angles look a little slacker.

deeeight Plus (Jul 16, 2013 at 8:21)
Yes but its a WAYYYY old idea for mountain bikes that goes back to the early days of suspension bike designs when there was no standards for shock sizes or mounting methods and every brand was trying something different.

jimmydubya (Jul 16, 2013 at 9:29)
Duluth has a whole lot more to offer than the Duluth Traverse plan. Hoping something gets put out about the gravity trails that get no recognition. We don't all where lycra and pedal 29ers. But on that note. The Horsethief is a sweet ride and was stoked to see them riding around town.

flappinganimal (Jul 16, 2013 at 12:27)
Do all my comments on Pinkbike just disappear? Or are they removed? They're never offensive or anything. Weird.

... Rumblefish. ;-)
Below threshold threads are hidden

endurocat (Jul 16, 2013 at 5:58)
Every other company is using Specialized's rear shock layout. First Kona,then Salsa, who will be next!

b45her (Jul 16, 2013 at 16:07)
that looks like a standard shock attached to a yoke via the bottom eyelet, doesn't the specialized shock attack via the shock shaft itself?

flappinganimal (Jul 16, 2013 at 1:31)
Looks like that Specialized a couple of stories down on the home page.

mikesturgeon (Jul 16, 2013 at 6:33)
ive got the older spearfish and absolutly love it not sure how i feel about the new linkage its still a relativly short travell bike and the ease of a single pivot system is a dream to work on not sure if the new system will be the same

CaptainSnappy (Jul 16, 2013 at 16:47)
@change, please design a brand new suspension platform that pedals well, seated, standing, remains active under braking, climbs well w/o too much bob, has a low centre of gravity, allows for at least a 1/2 seat-tube overlap, has sufficient stiffness in the rear triangle and doesn't infringe on existing patents.

meafroninja (Jul 16, 2013 at 0:40)
I am so sick and tired of this wheel size debate. please everyone just shut up and ride your bicycle.

Enduro27 (Jul 16, 2013 at 1:34) (Below Threshold)
No, i will never buy a 29er in my life so therefore i do not want to read all of these 29er reviews, there are so many recently on pb that when i see something to do with a 29er on the front page i never read the article... I just scroll down to the comments

rclugnut (Jul 16, 2013 at 6:19)
enduro don't be a troll or a hater it gets old and quiet frankly no one really cares to hear how the world revolves around your opinion and everybody in the bike industry should consult you before any new technology is released.... and news flash are other bike websites out there if you don't like the content PB is putting out don't go here...