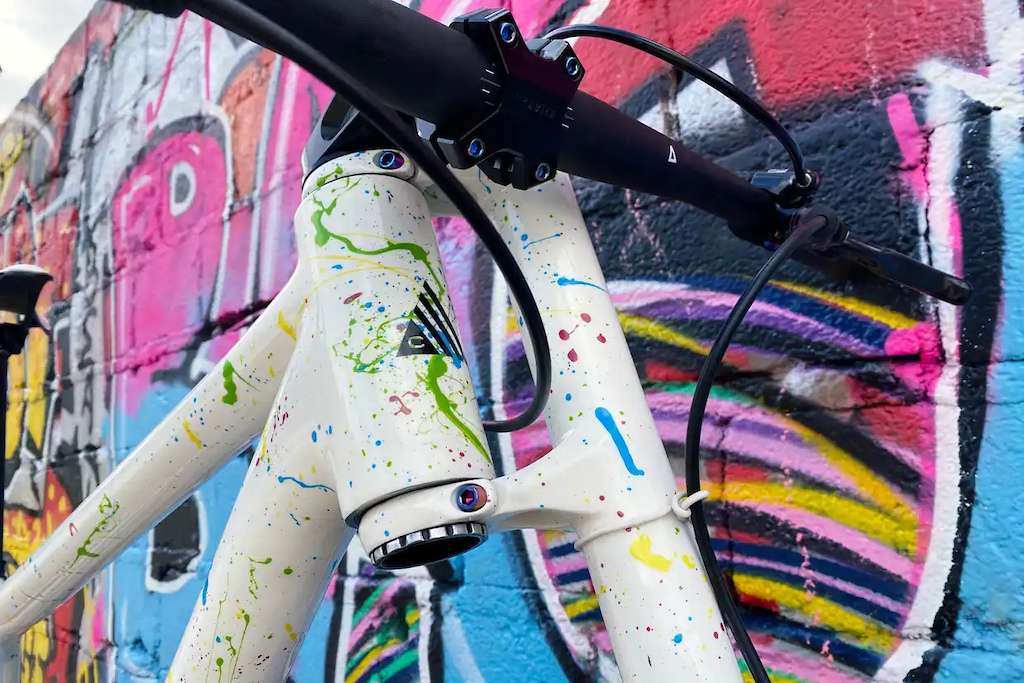 BIKE CHECK
Daniel Manfredsson's
Neo-Retro Creations
Meet Daniel Manfredsson. The Swedish bike creative is a designer at Cannondale, but in his free time, he takes new and old bikes and rebuilds them to his personal taste, both virtually and in the physical world. The man formerly known on Instagram as @localbikechop says his hobby has always been to sketch, build, and modify bikes to his liking.

His builds cover a wide range, and he's toyed with everything from wild track bikes to this category-bending "monster cross" bike to stunning full suspension mountain bikes like this BMC Speedfox. Some exist as computer renderings, while some are real-world carbon and metal.

Daniel's favorite bike company was Cannondale long before he was a designer. His first real mountain bike was a Cannondale, and he says he's always admired the brand for doing things its own way and pushing the industry forward. After spending the last eight years freelancing in automotive design, sports design, and interior design, as well as designing for Husqvarna, the opportunity to work with Cannondale was a dream come true, he said. Working with Cannondales both in and outside of his work, here are some of the bikes he has reimagined. 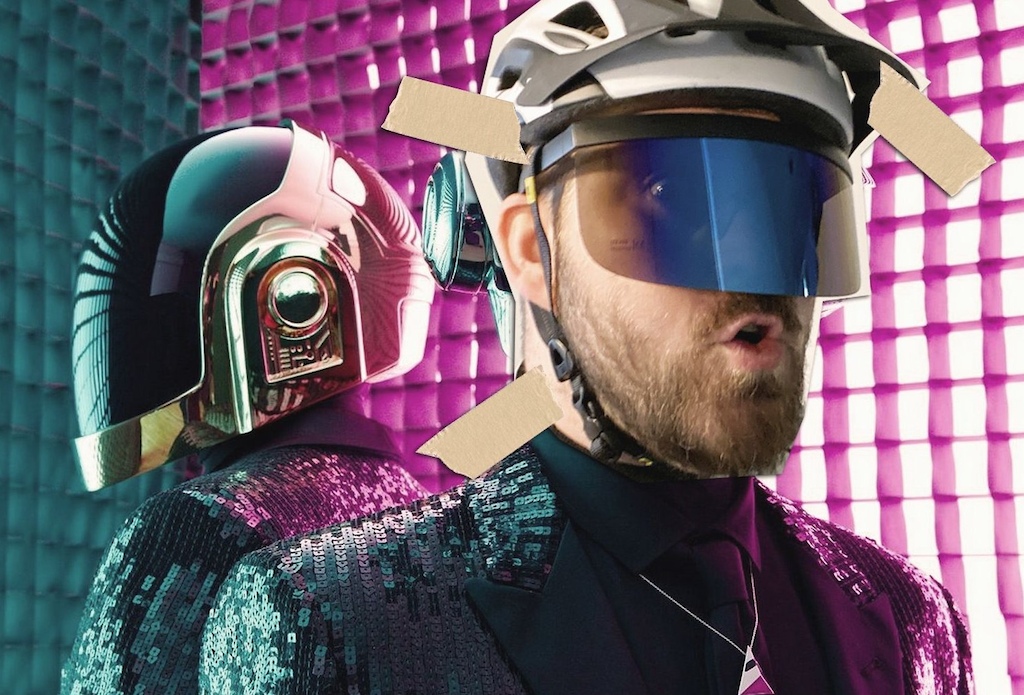 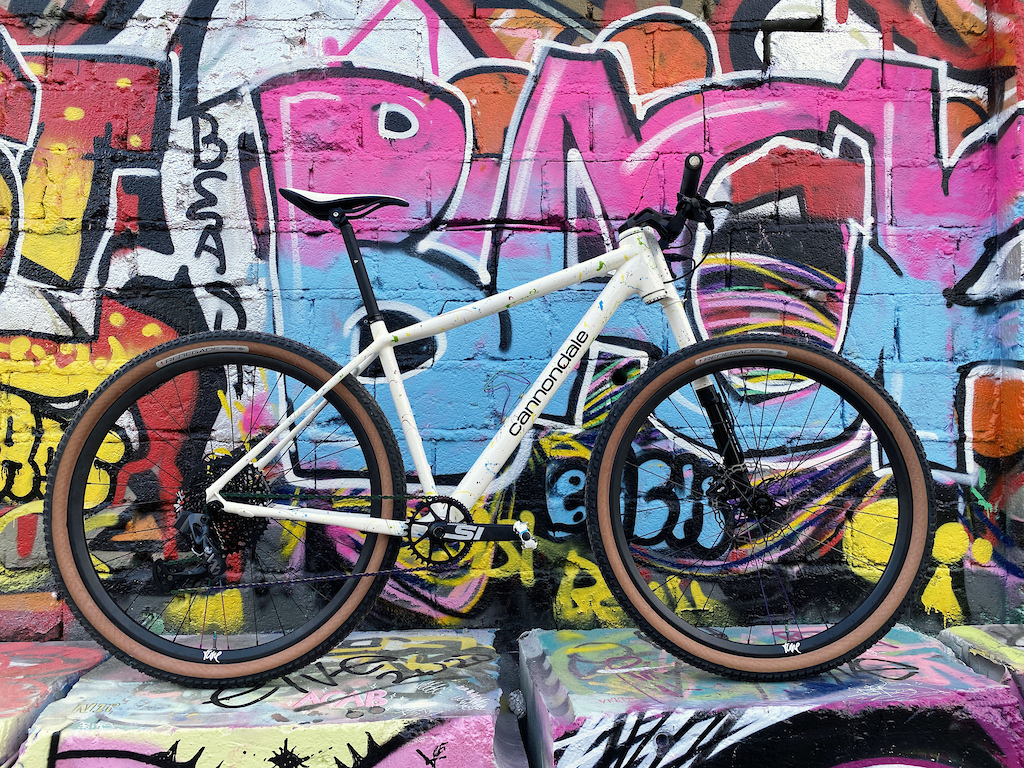 Daniel's Cannondale F29, a project he dubbed "Save-A-Dale" because it was an effort to keep the 2012 race bike current. 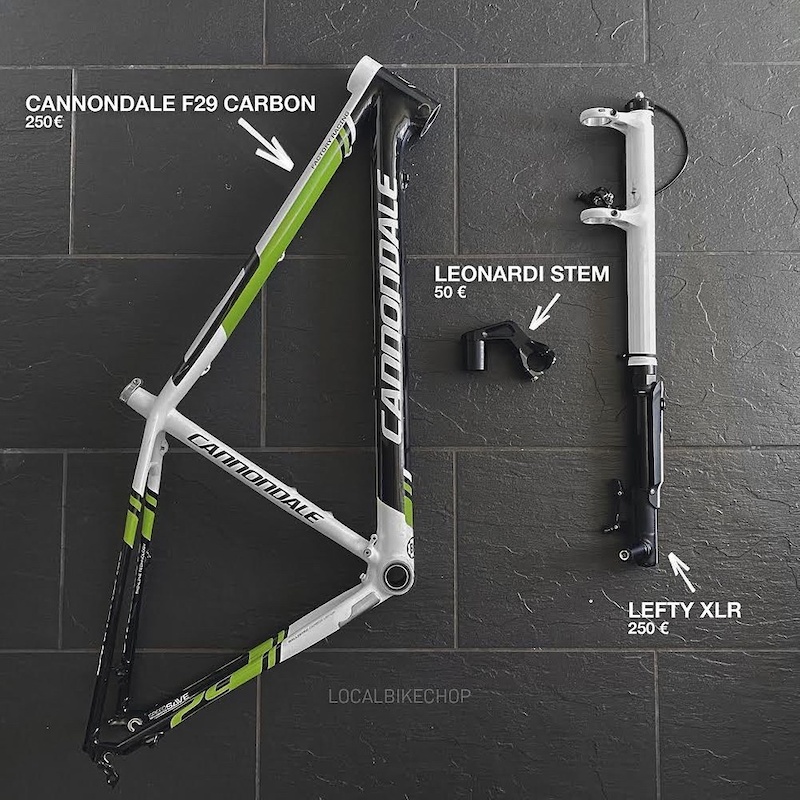 Daniel started his dream bike project with a 2012 F29. 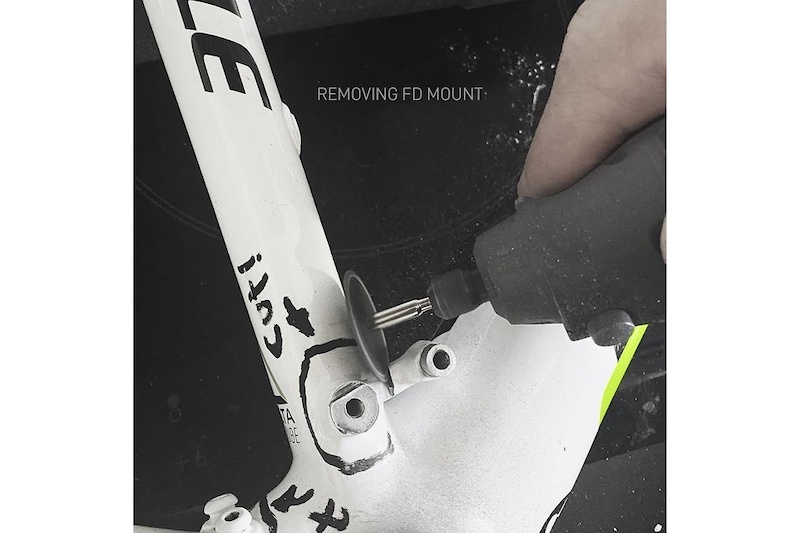 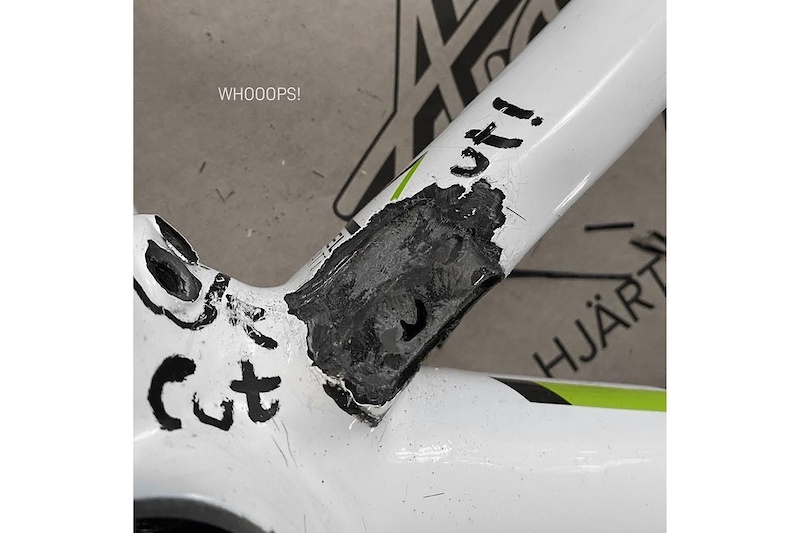 Good thing there wasn't a warranty left to void.
One of the first steps was to shave off all the parts Daniel deemed "eyesores" like the front derailleur mount and all the external cable guides. Doing so made lots of holes in the frame, but he had the carbon work skills to patch up the holes. He also drilled new holes for internal cable routing. It had to look clean, after all. 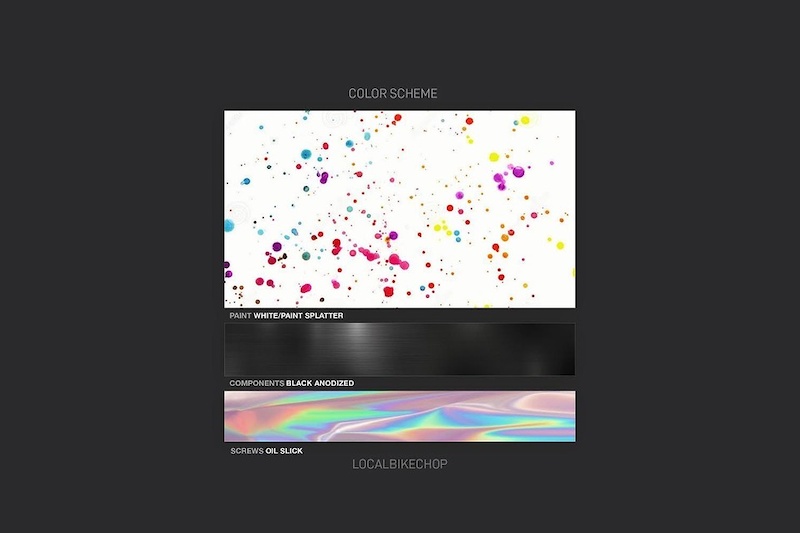 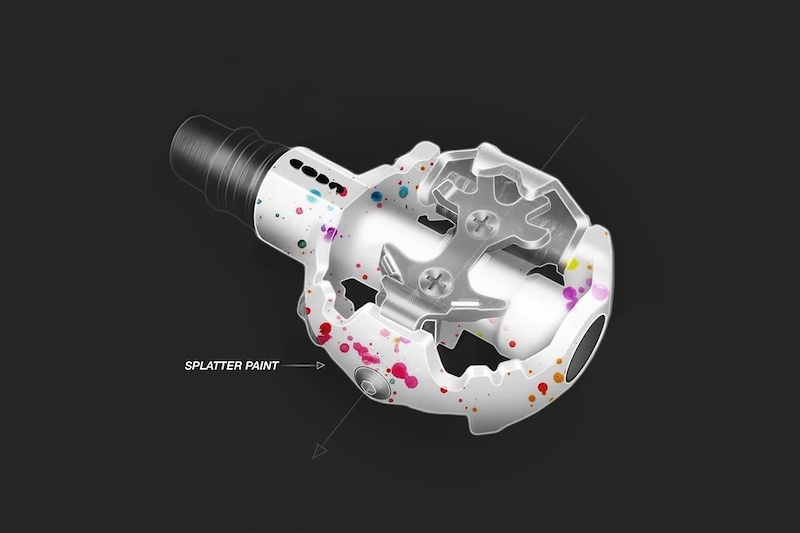 Once the frame itself was dialed, it was time for the colors to pop.
Daniel paints most of his bike builds himself, but for the F29, he had a friend at a local bike shop go wild with it with the goal of recreating a '80s and '90s feel. With AXS shifting and a blend of old and new parts, the bike dips its toes into five separate decades. 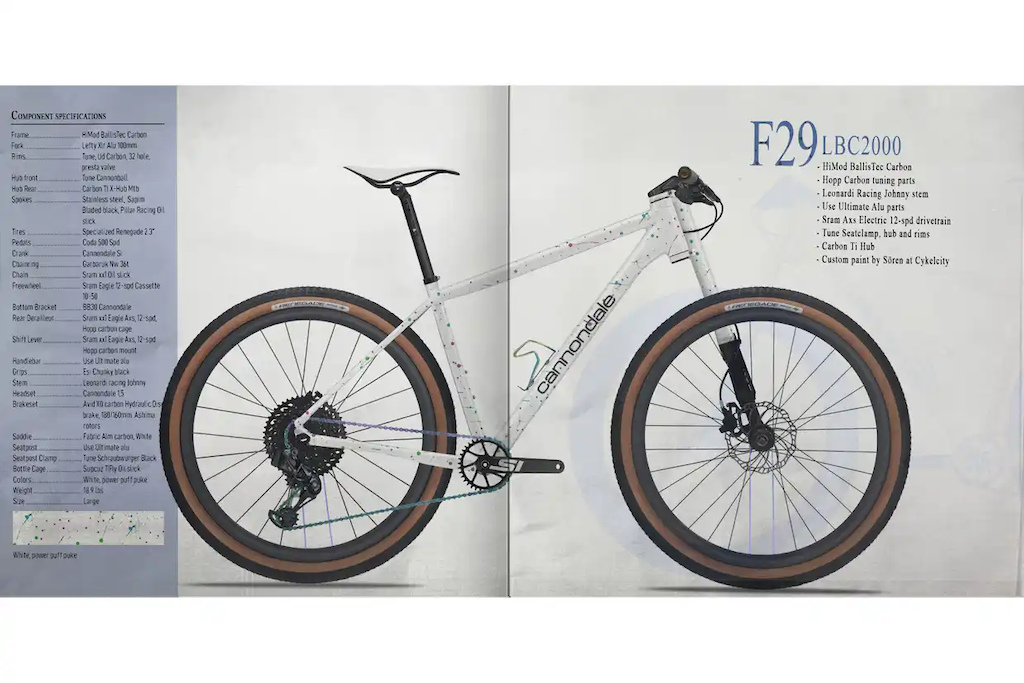 Daniel even recreated an old Cannondale catalog for the parts list.
For his next Cannondale build, Daniel decided to throw all his old parts together into a "parts bin neo-retro super bike" while celebrating the iconic Y frame of the Cannondale Super V: "Compared to modern full sus bikes," he said, "this one is not hiding anything, the design is like a big V for victory hand sign." In his first Instagram post about the bike, he explained that it would not be a period-correct bike, but incorporate parts from the late '80s to early 2000s.

While dreaming up his Super V build, he started daydreaming about what it would take to modernize the geometry of the Super V to match that of the modern Scalpel. While that bike doesn't exist (yet) in real life, he did start the sketching process and has hinted that such a project is in the works.

As for his current Super V, the biggest change he made was to the suspension, shortening the rear travel to 20mm to make it "less shitty," he said. "I have built my own rear shock, I took a coil shock from a moped and shortened it and slapped a Headshok boot over it, so the bike is basically a softtail now, and that is a good upgrade from the previous rocking chair experience." 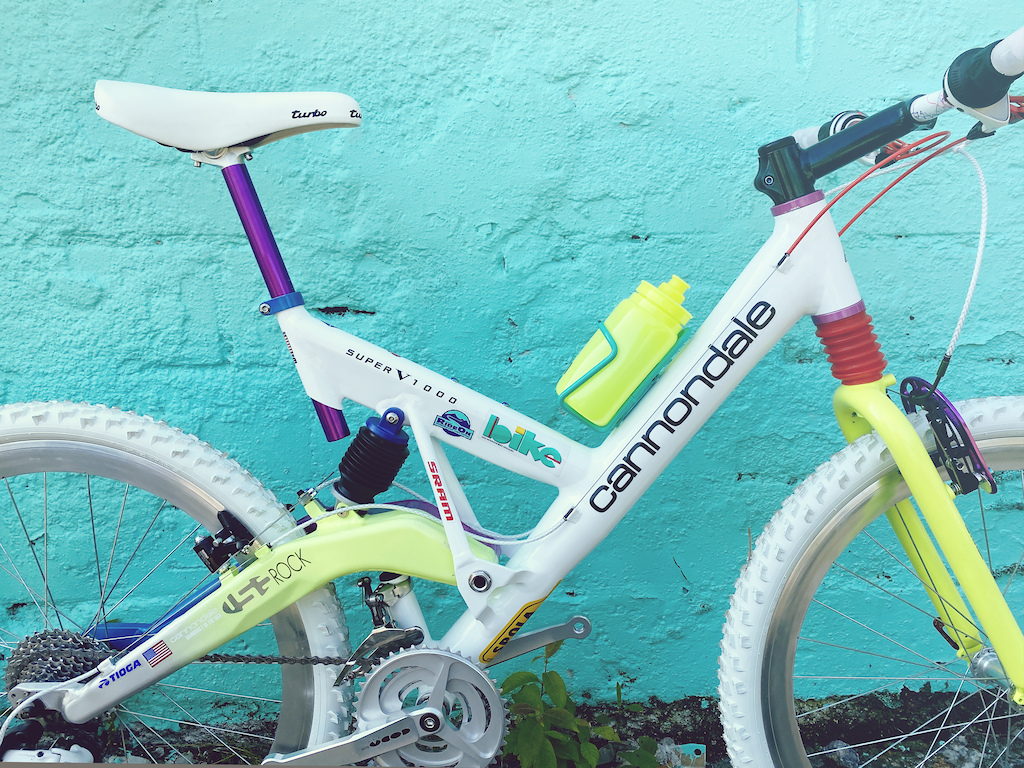 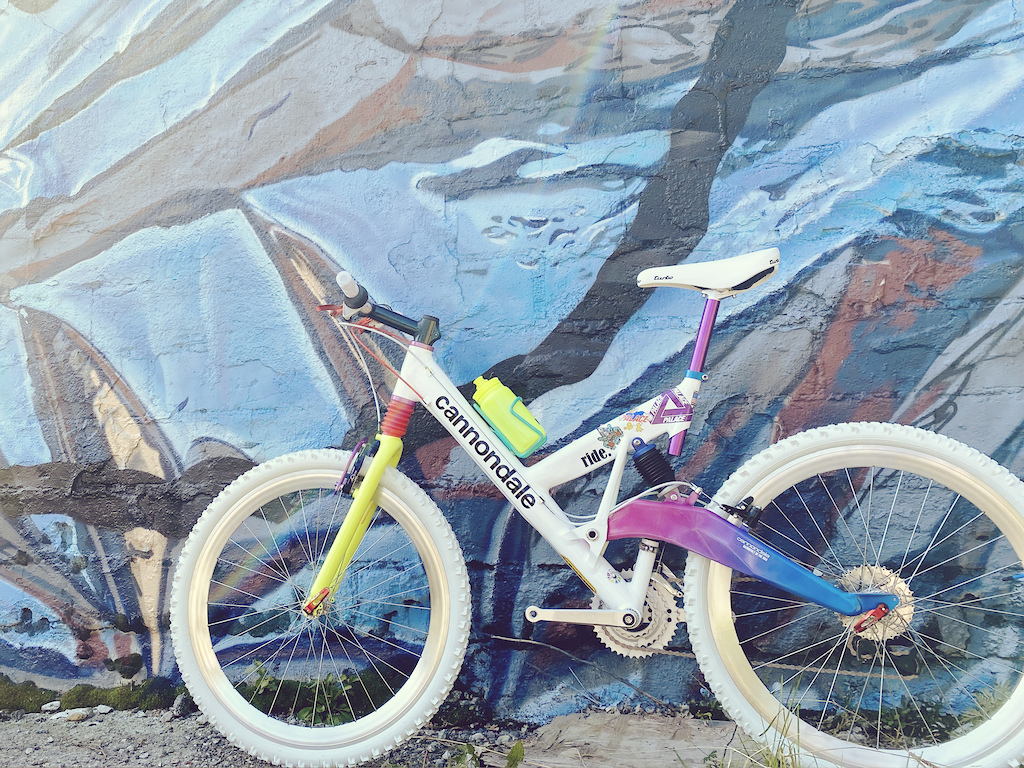 Two sides, lots going on.
Daniel's favorite thing about the bike is that the drive side is meant to look more retro while the non-drive side is a nod to both the Rapha-Palace bikes and the EF race bikes, many of which have featured various blue-purple-pink color schemes over the years. 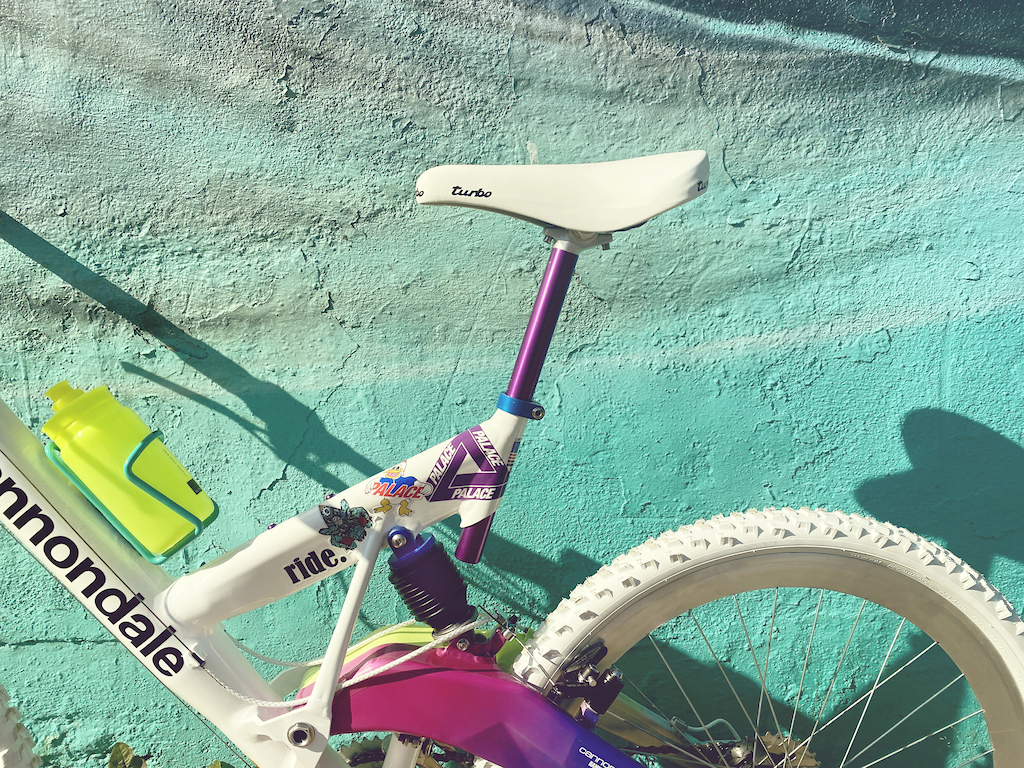 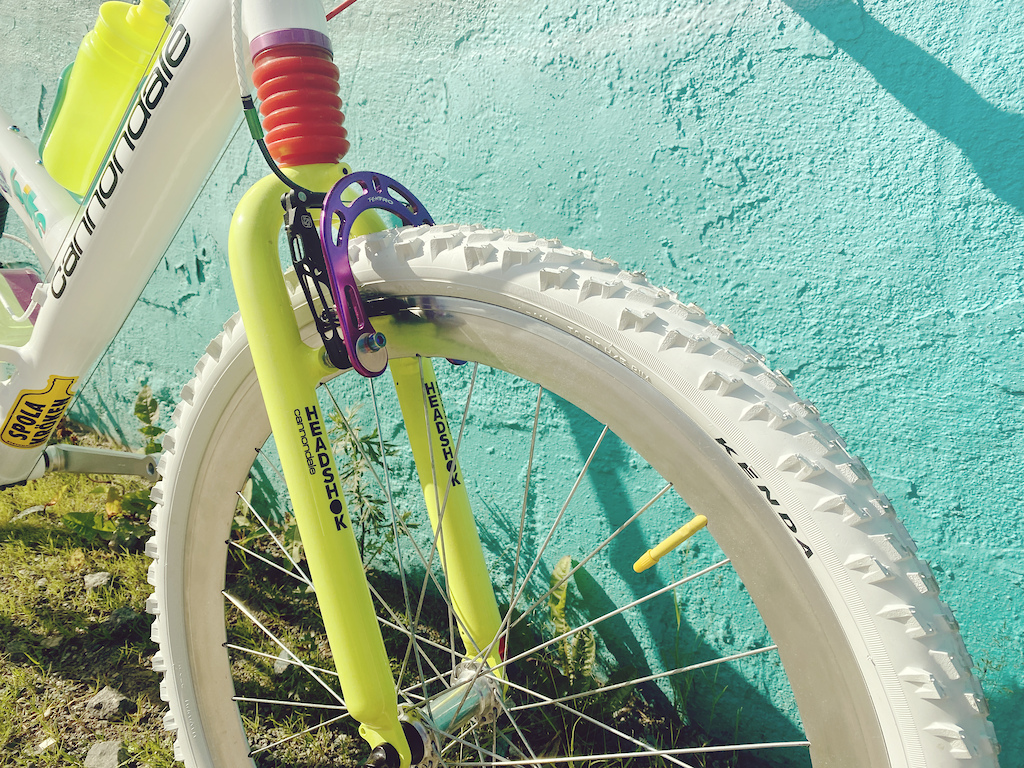 The purple ano is real.
Compared to modern mountain bikes, Daniel is well aware that his Super V won't measure up as a race bike, no matter how nostalgic or historically intriguing it is. Still, he says, it's cool to have brought it back. "I brought it back to life, maybe not as mtb race machine it once was, but maybe more like a low instep commuter on acids and steroids," he said.

The biggest thing he learned, he said, was how to create the purple fade on the swingarm. It's essentially just clearcoat over aluminum, but he added a bit of pink and blue and was impressed by how well it turned out. It's a method he'll be playing around with in the future, he said, as he designs and builds more bikes.

And his other notable bikes? He said the monster cross bike mentioned earlier was awesome to build, his Scott Sub made him realize the effects a simple color change can have, and his BMC build is still the best-looking trail bike out there in his eyes. 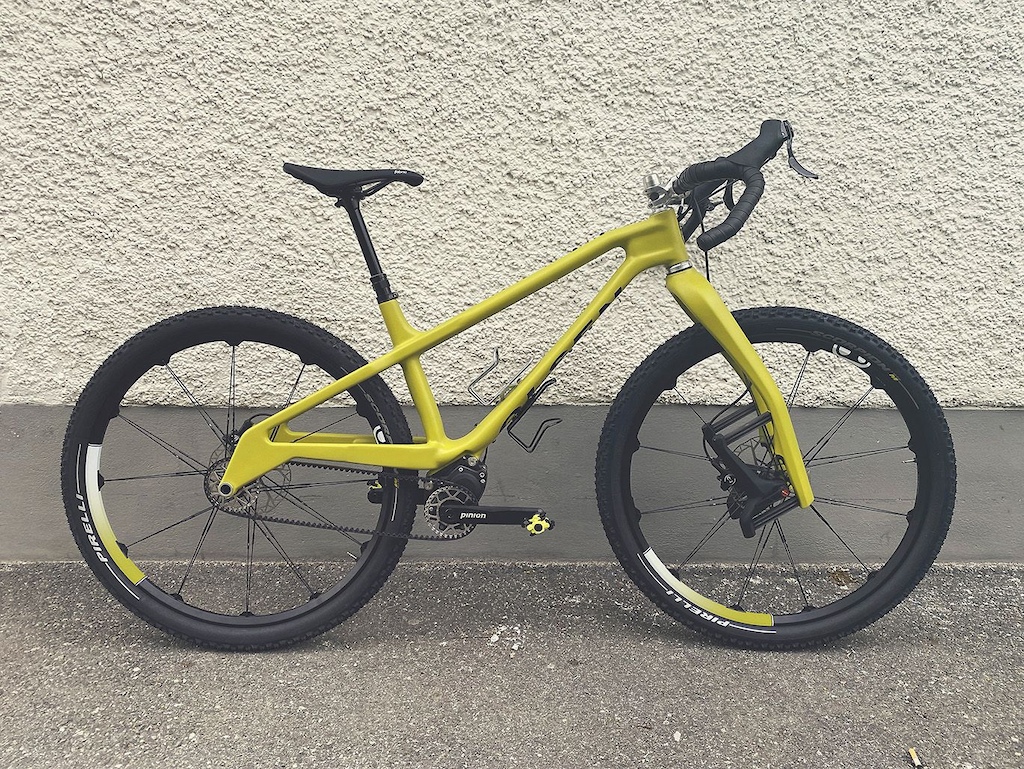 Monster cross. Daniel is a self-proclaimed lover of Lauf forks. 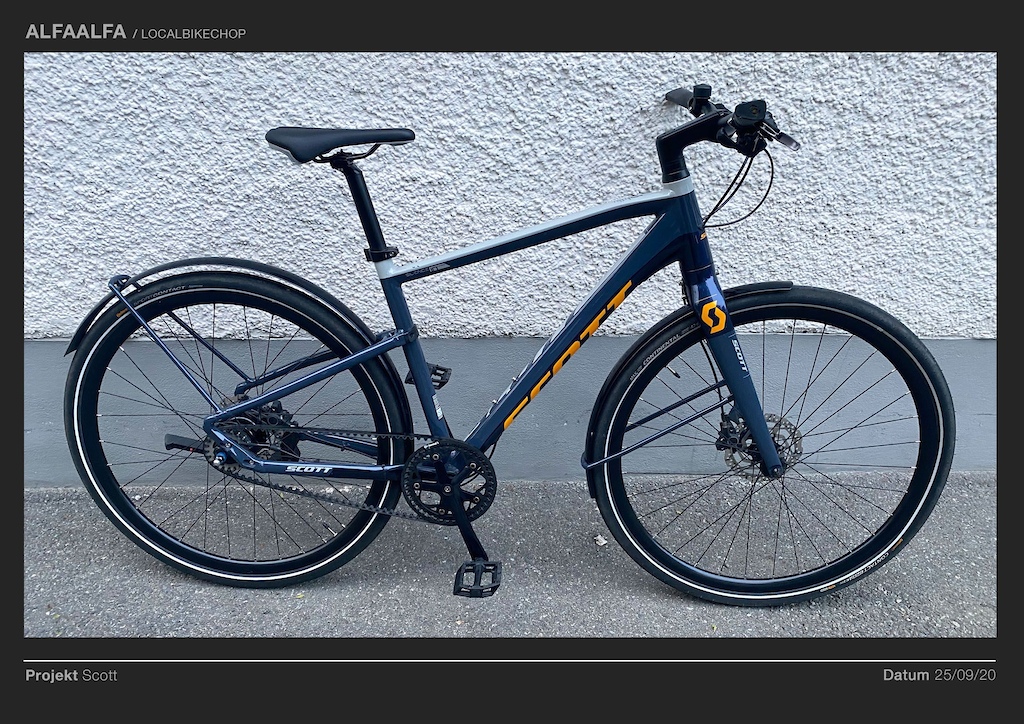 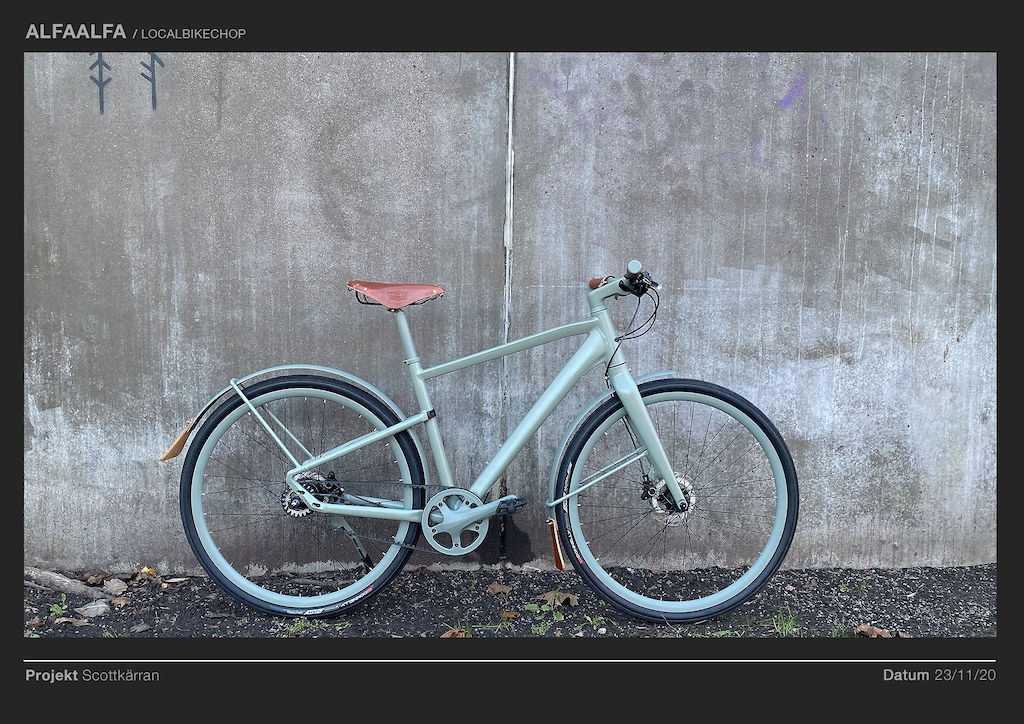 Scott Sub, before and after. 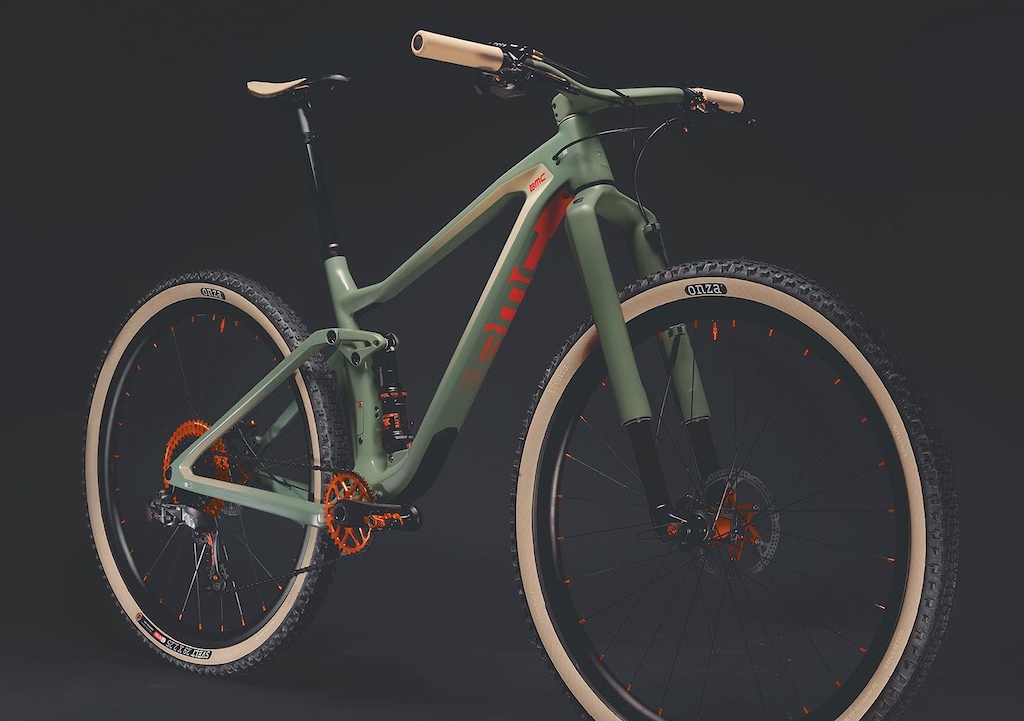 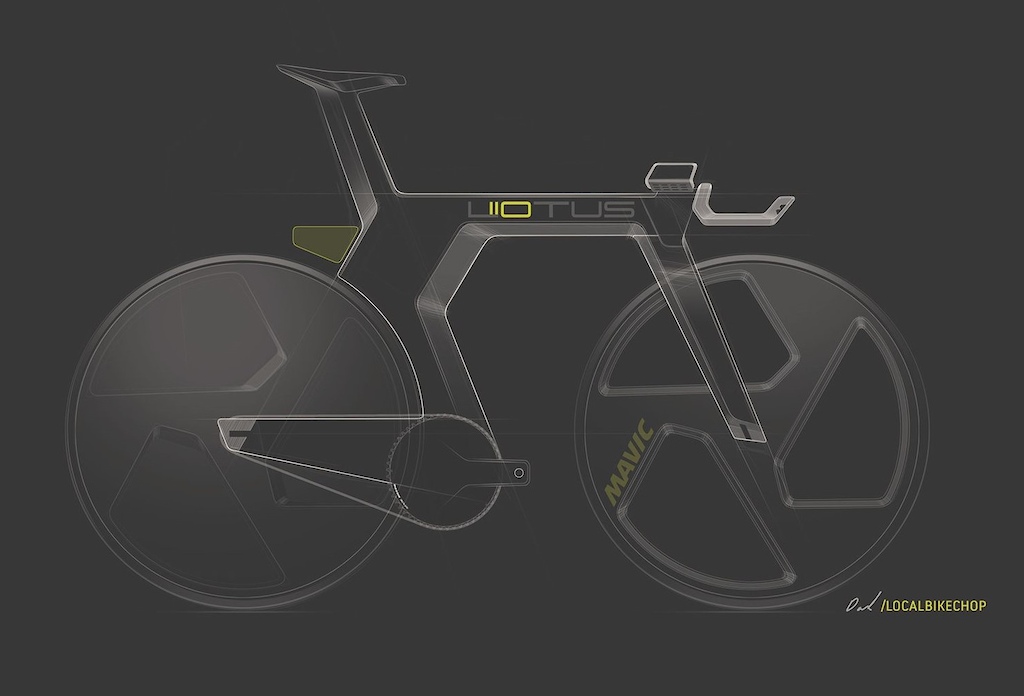 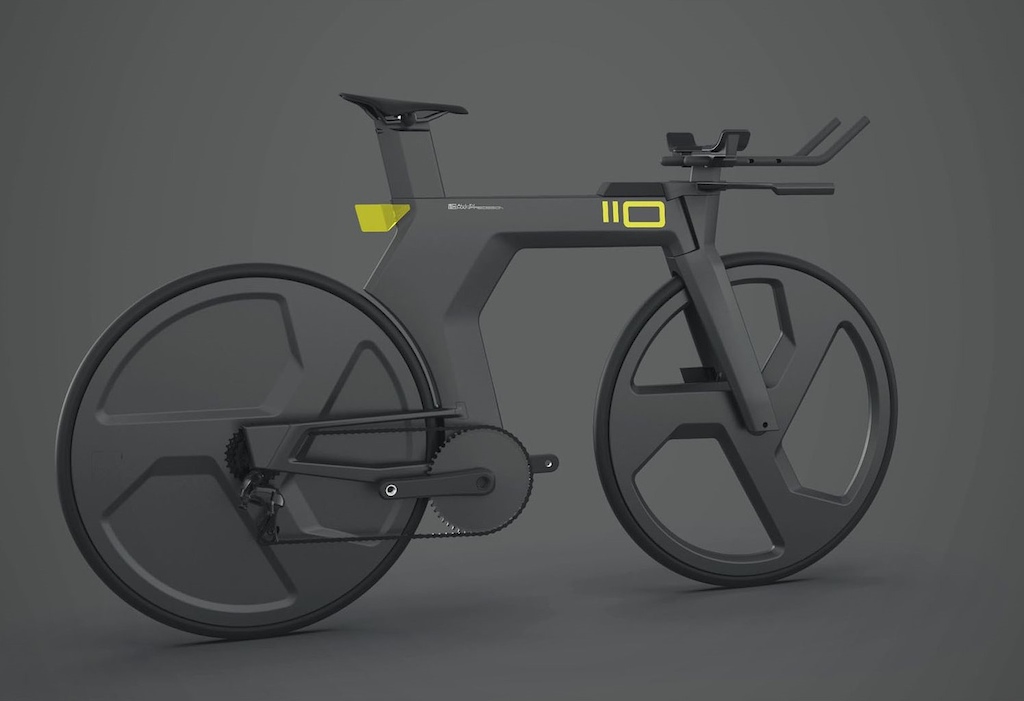 The Lotus project, another celebration of the weird and wonderful.
This year, outside of his job, Daniel plans to build two road bikes, a mountain bike, and a kids bike. What's more, he's challenged Dangerholm to a kid's bike build-off. What do you say, @bicyclerider?

MikeyMT (Jul 20, 2021 at 14:59)
Cool. But not as cool as Gorge Road being saved! www.odt.co.nz/regions/queenstown/queenstown-bike-park-saved

wyorider (Jul 20, 2021 at 15:09)
Cannodale's current paintjobs are lame. Bring some of these brighter, more fun colors to the production stuff. You can always have the boring black or gray option for the people who have an aversion to bright bikes.

WayneParsons (Jul 20, 2021 at 15:12)
I’m wondering the same thing. We have coverage for just about everything except for local racing in our own province.

TwoNGlenn (Jul 20, 2021 at 17:41)
The Jekyll's look nice. But I agree Cannondale's paint schemes aren't great. Bring back the iconic Team Blue and Team Yellow. We don't need another variation of friggin charcoal.

but I love seeing good stuff have definitely been around enough to suss out the corn.

solar-evolution (Jul 20, 2021 at 15:24)
Yep. It seems bike check pics tend to end up in front of whack graffiti. I guess to most folks outside of the graff world it all looks the same

solar-evolution (Jul 20, 2021 at 16:55)
@ohio:
The pink and blue letters appear to be “BACK”, but it’s hard to tell for sure if that’s the whole thing.
To me there’s not much here to signify because it is neither hip hop based graffiti nor gang graffiti.
Just a kid with a spray can. Hopefully they practice and get better.
Real hip hop based graff has more “style” and to be “good” it must show a level of “can control”- technical skill of how to use the spray can artistically as well as creativity in letter composition and structure not seen here.

megatryn (Jul 21, 2021 at 0:25)
@solar-evolution: Well, there are no culture of gang graffiti in Scandinavia, (not in the same way as in the US at least) so all graffiti here is Hip-Hop based. There are however "legal" graffiti walls that are put up for people to roam tree with their cans. There usually are no pieces there, just a lot of colour and bad tags, which leads me to believe that this is one of those.

swoop-aeg (Aug 18, 2021 at 12:15)
@solar-evolution: I think Daniel has parked his bike somewhere in Snösätra in south Stockholm. I happen to think there's some good street art there, try this for example: www.google.se/search?q=snosatra%20huge

Chuckolicious (Jul 21, 2021 at 7:05)
Oh man, memories! I got the first full fledged Super V, I think it was the 3000 and in '93. Rode the hell out of that thing and it was amazing at the time. Headshock was so great, being able to lock it for the climbs. Problem was, the Headstock kept blowing out. They'd replace, it would blow. Got frustrated and serendipitously got connected to Foes, so I sold it and got one of the first LTS frames, put a full XTR group on it and the crazy noodlie golden RockShox SL Mag forks. Now that was a sled, with 6" of rear travel. Just had to keep the front end light :-D

Almazing (Jul 20, 2021 at 17:02)
That Cannondale Super V is the most visually appalling bicycle I have ever laid my eyes upon.

DylanH93 (Jul 20, 2021 at 20:19)
This is awesome! Love retro bikes and just modding them out like crazy. I'd love to see more mtb "history" kind of content. Definitely following this guy for future builds!

thepodge Outside+ (Jul 21, 2021 at 0:55)
The frame on the Lauf monster cross bike is from gearbox and carbon specialist olsenbicycles.com lots of interesting products on their site.

PHeller (Jul 21, 2021 at 7:59)
His idea of modernizing a Super V was cool, but the reality of the project was a let down. Have grown up riding MTBs in the 90s and having sold quite a few for a good penny, I can no longer get on with huge stems.

maybenotaprofile (Jul 20, 2021 at 16:30)
I honestly don't think there's a linkage fork on any of those bikes. The green leaf spring fork looks unexpectedly good though!

FAIRbicycle (Aug 4, 2021 at 8:01)
The colorways on the Super V are amazing! Actually love the work on all the 'Dales.
Here in Switzerland there are a lot of high end 'Dales that should be saved