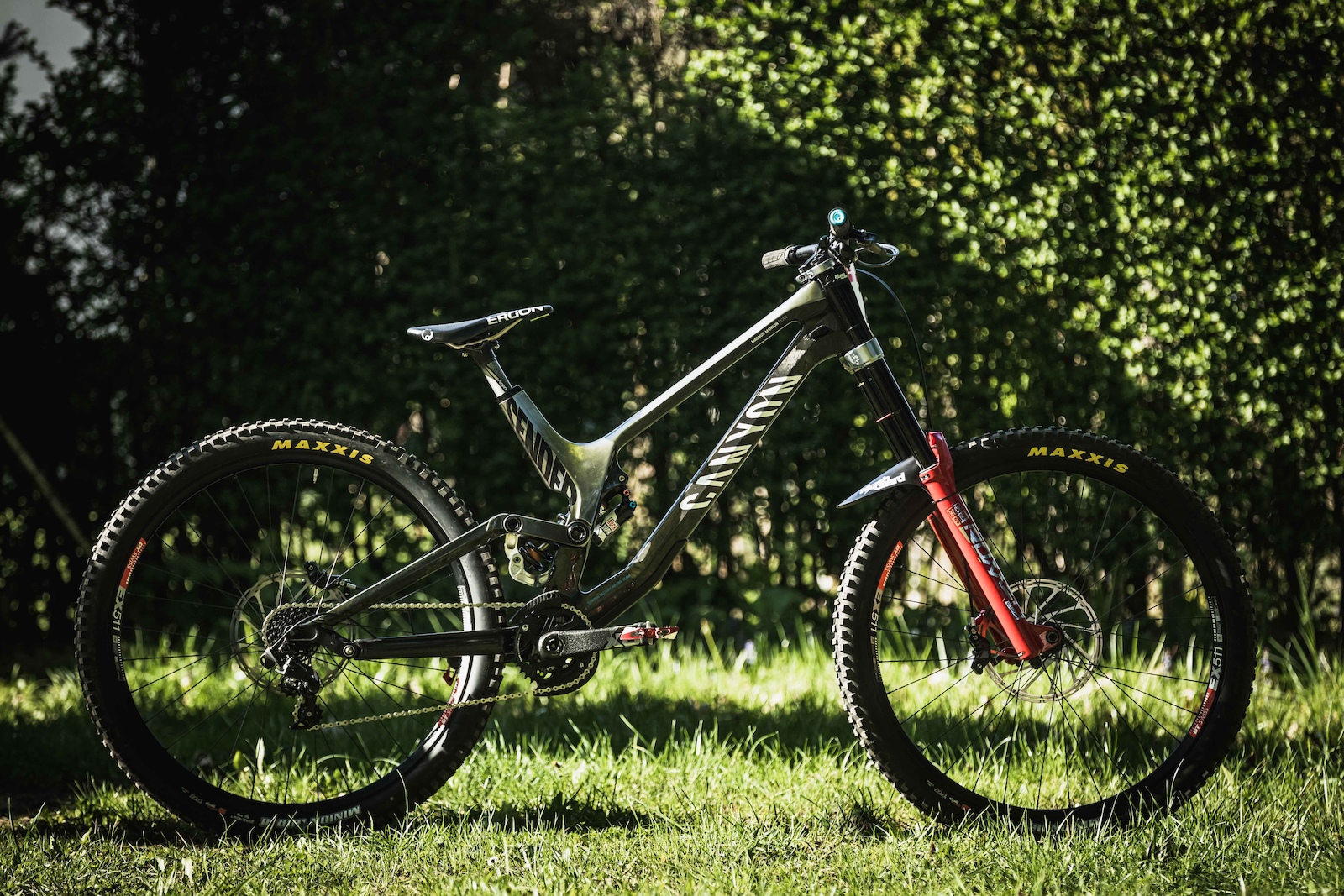 BIKE CHECK
Magnus Manson's
Canyon Sender
Photography by Dan Griffiths
Canadian champion Magnus Manson finally bagged himself a factory ride this year as he stepped up from a Canadian Canyon program to their proper Elite set up. As he raced on the Sender last year it should be a pretty easy transition for Magnus but there are a few changes here, most notably the move to 29-inch wheels.

This is not a new frame, rather a 27.5-inch frame put in the longest chainstay setting and with 29-inch wheels fitted. This is the first 29 inch Canyon Sender we've seen on the World Cup circuit, although curious owners have been running this standard 27.5 inch Sender with 29-inch wheels for a couple of years. It will be interesting to see how Magnus fares with this set up as opposed to a fully custom 29er.

Magnus' bike also couldn't help but draw us in thanks to the unreal chrome paint job he's turned up to Maribor with, this bike is a real head turner. 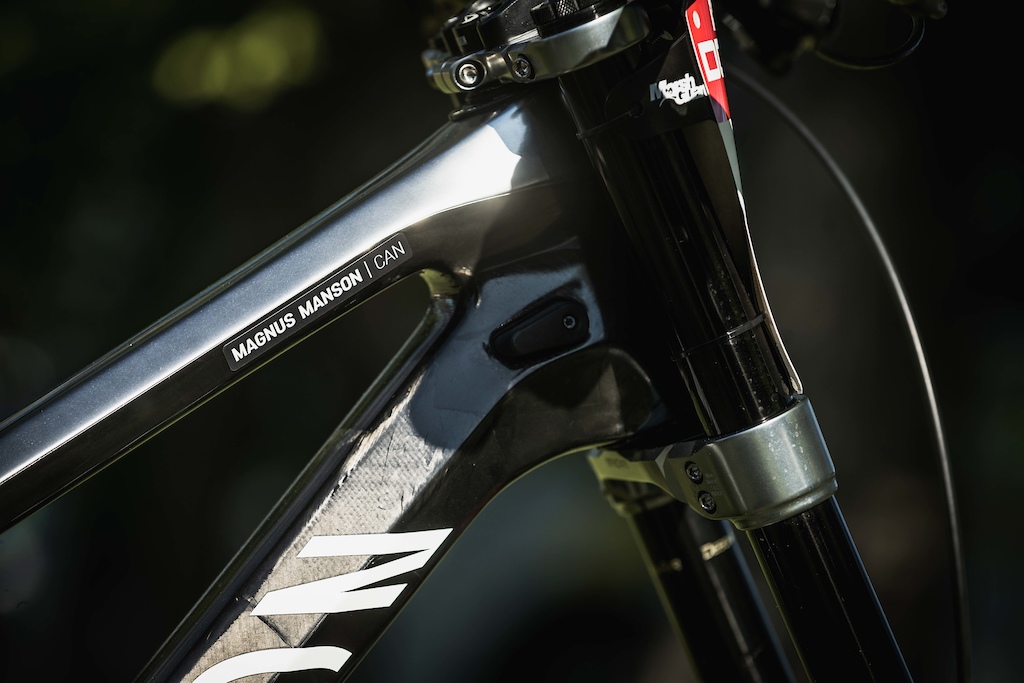 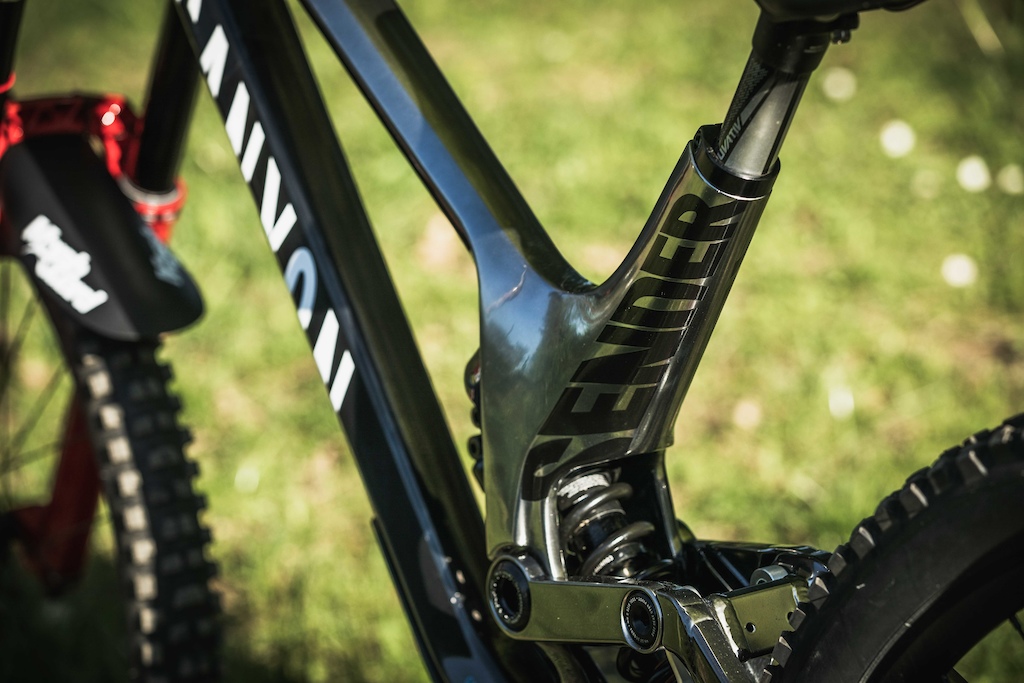 Custom chrome means Magnus announces his arrival on a factory set up with one of the coolest looking bikes out there.
Canyon has largely stuck with their tried and tested set up from last year that delivered Troy Brosnan to the podium three times and saw Kye A'Hern take some junior wins. The biggest change comes in the wheels as DT Swiss replaces Mavic. Manson is running the EX511 wheelset whereas most World Cup racers stick with the 471. The 511 is 30mm wide rim that is designed to withstand a bit more abuse than the XM 481.

The rest of the spec stays the same with RockShox on suspension duties, Maxxis for tyres and Canyon's own G5 finishing kit. 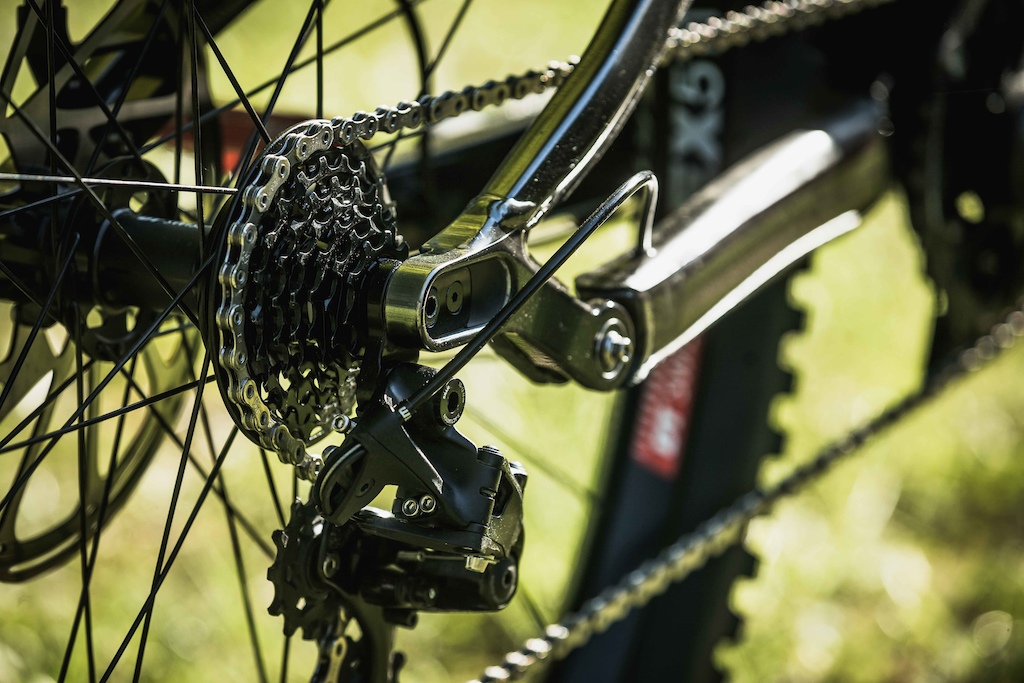 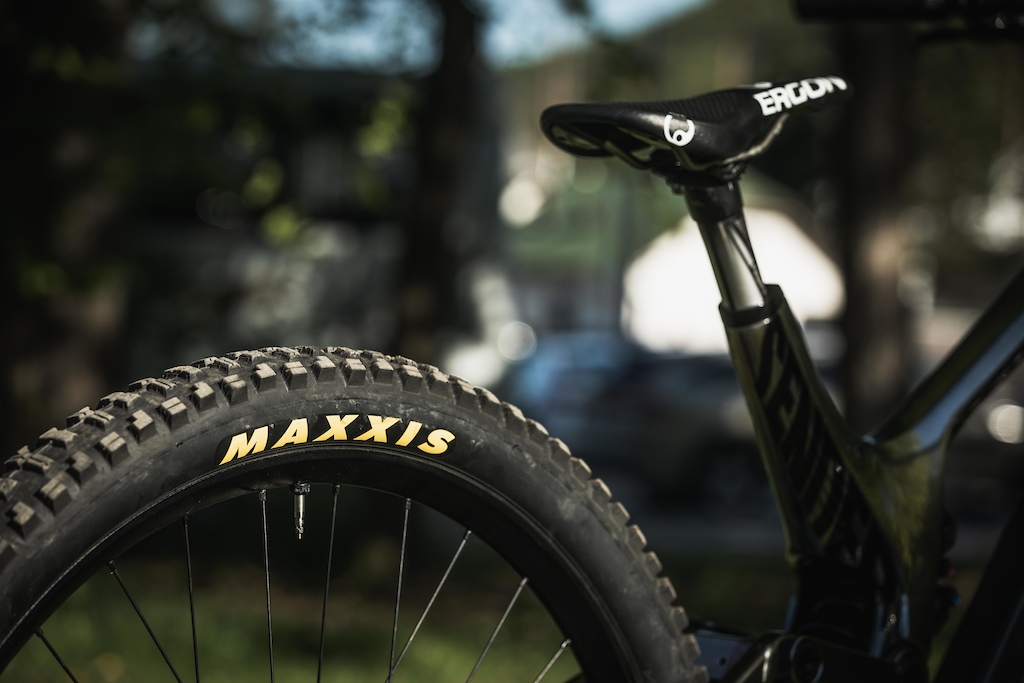 The big wheels just about work in the 27.5 Sender frame. Reports we've heard from people who have tried it is that it's a super-fast set up too. 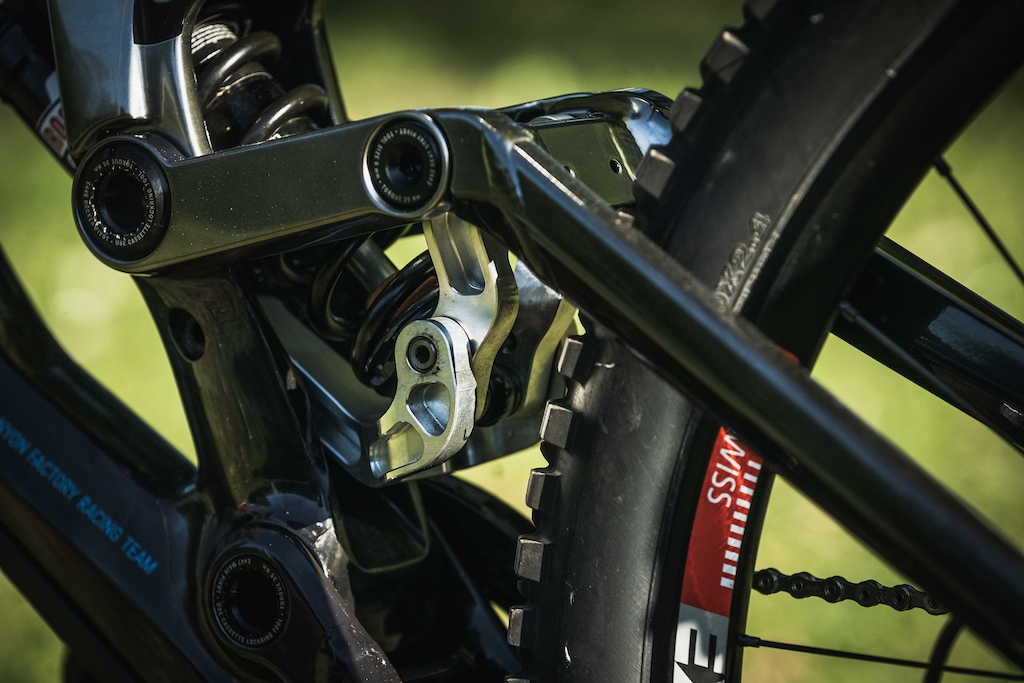 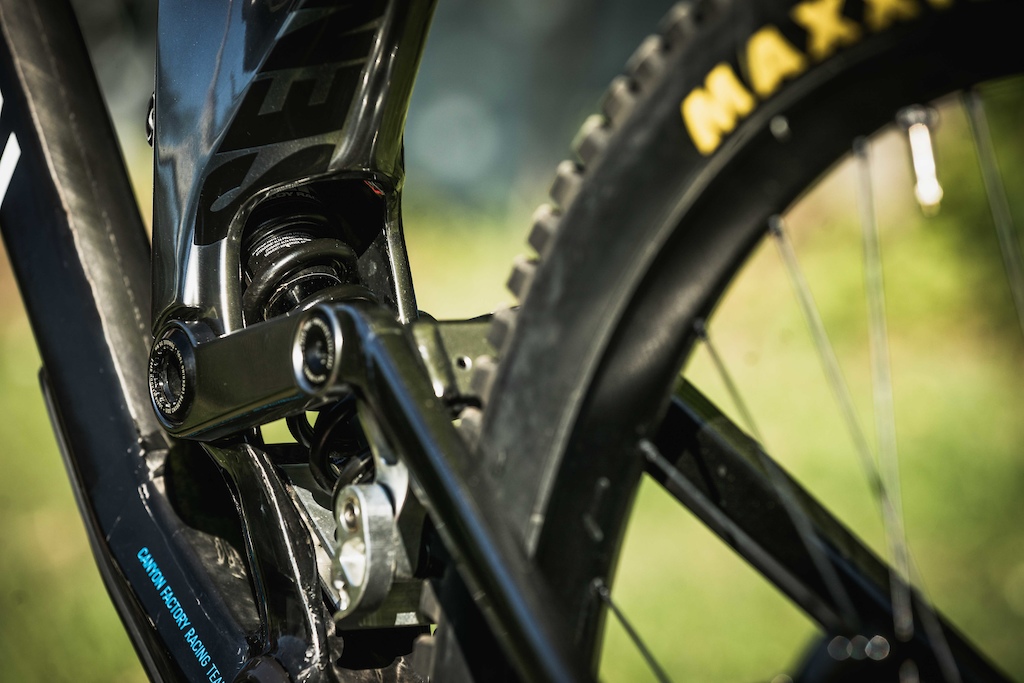 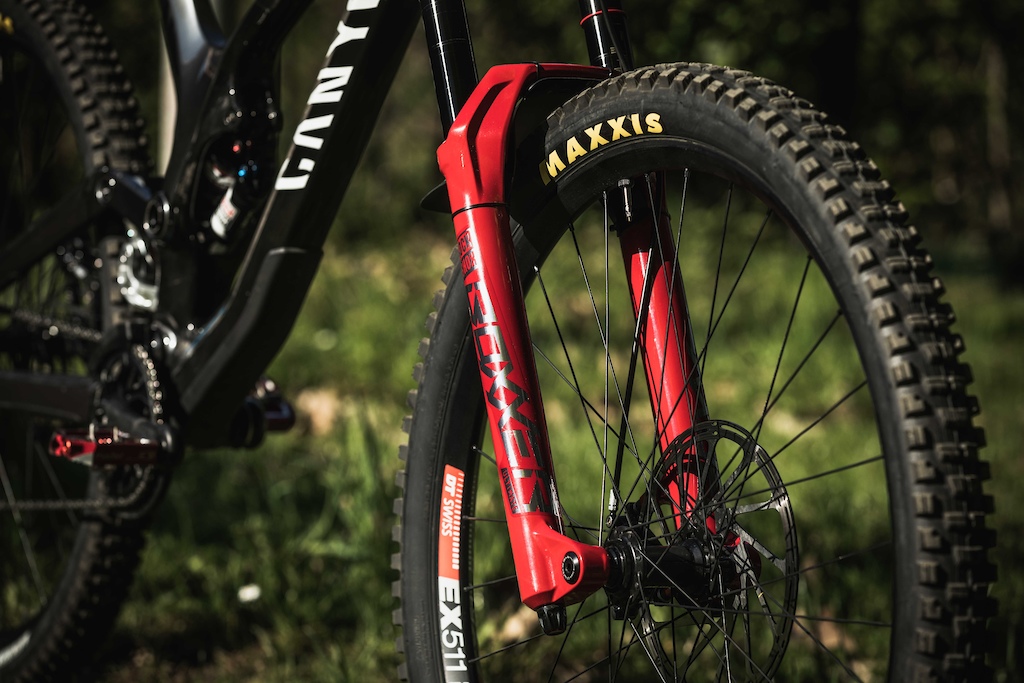 Magnus is on Minion tyres with 27psi at the front and 31 psi in the rear. 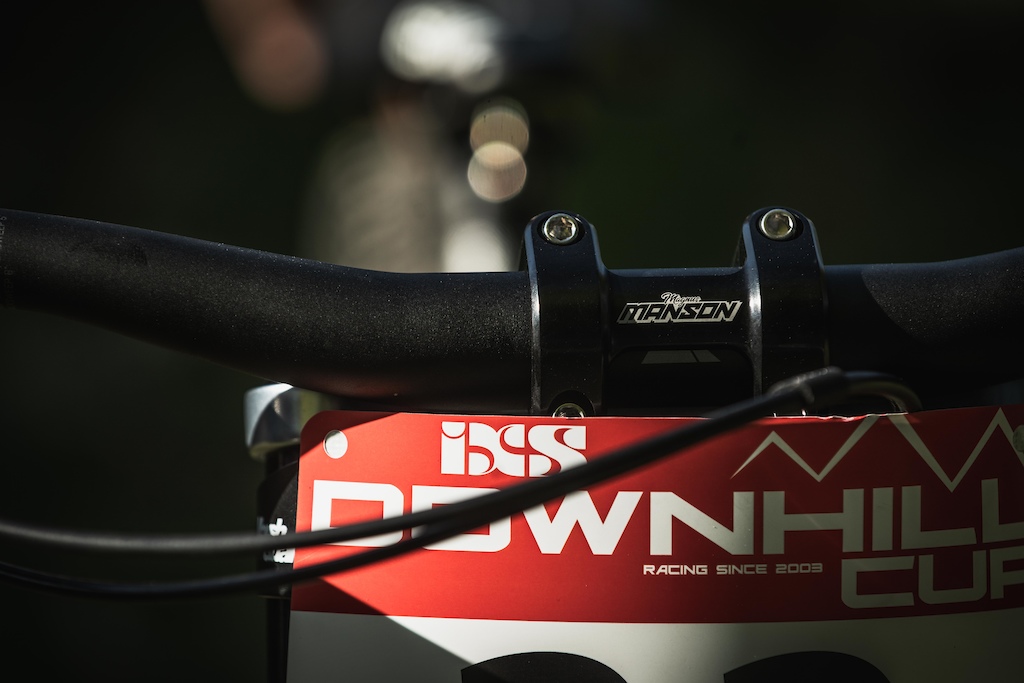 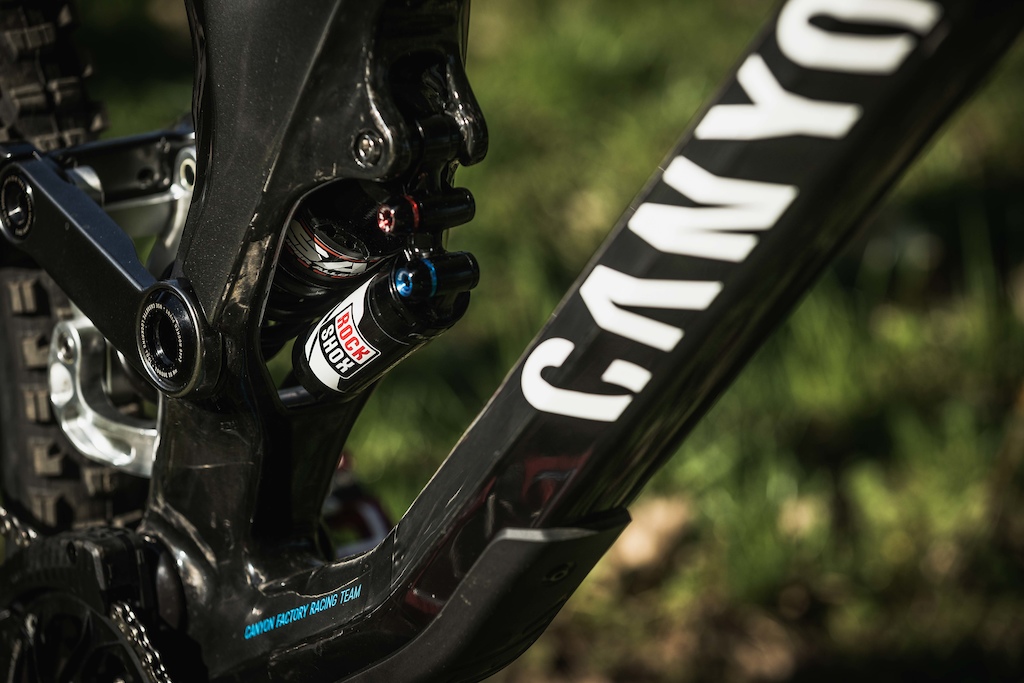 A Super Alloy Racing spring sits on a Vivid Coil for a 'super' powered rear end. 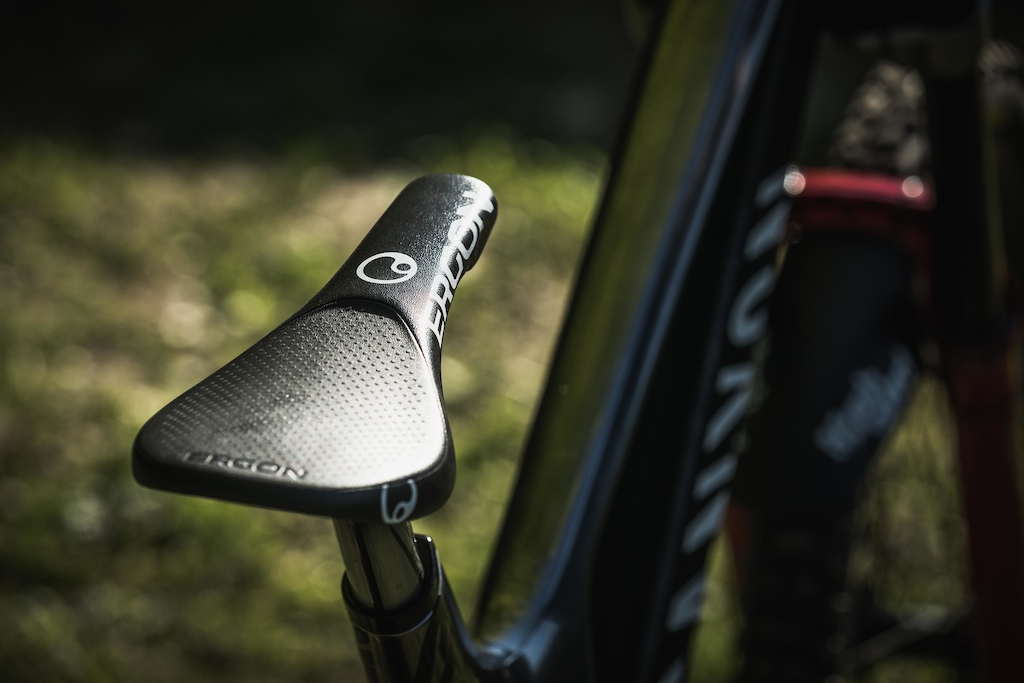 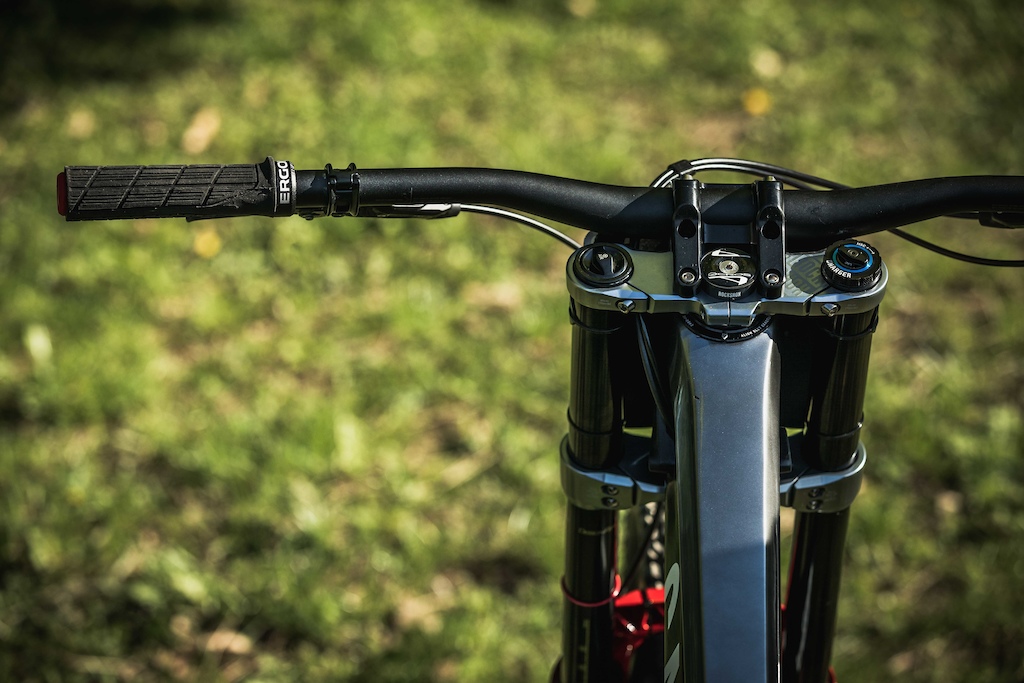 A mix of Ergon and Canyon G5 parts for the cockpit. Magnus runs his bars at 780mm. 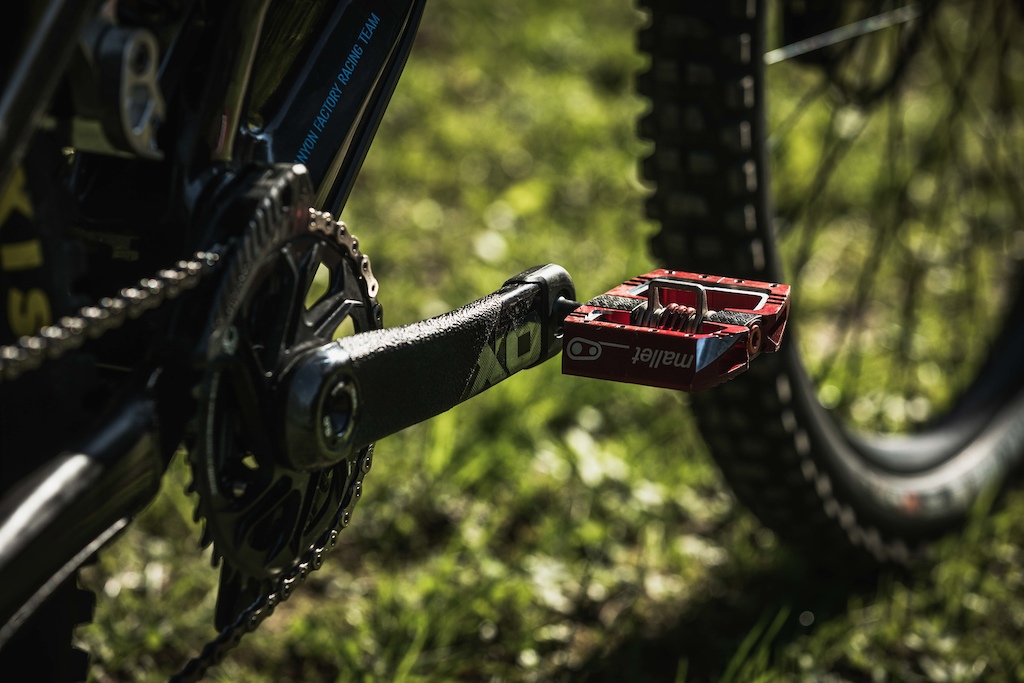 Bflutz625 (Apr 22, 2019 at 6:53)
With the push for metric shocks I’m guessing that they moved on to the Super Deluxe Coil RC which is Rockshox’s new metric DH coil shock. Though it does lack the HSR adjustment this shock is already being used by Unior Devinci and other brands with Rockshox builds.

JuliusZhuang (Apr 22, 2019 at 7:54)
The fact is that vivid is better than super deluxe.At least it's a twin tube shock rather than a single tube one

goflowz (Apr 22, 2019 at 9:26)
yes its a Vivid R2C. either someone dont know what theyre talking about or just another marketing BS trying to push the useless metric sizing

bman33 (Apr 22, 2019 at 14:45)
Red is their signature color. Same as green for DVO and Orange for Fox. You do realize that all new RockShox come in black if you want to buy your own right?

almacigatrailrider (Apr 22, 2019 at 22:44)
I blame Fox for starting this "colored lowers that don't mix well with any bike frame" nonsense.

markinator (Apr 22, 2019 at 23:40)
@almacigatrailrider: Rockshox have been doing it since at least the OG yellow Judy SLs in the 90s, before Fox even made mountain bike forks.

ak-77 (Apr 22, 2019 at 12:43)
The harder you ride the more pressure you need. Even with inserts. I just can't keep my line going at the speed these guys ride, I'd be in a helicopter before getting half way down. So I can profit from the extra grip that lower pressure gives me to make up for my lack of technique. And this guy can corner and straight line hard enough to be bothered by burps or squirm or rim failures at the pressure I ride.

Longtravel (Apr 22, 2019 at 14:17)
I wander if suspension pressures play a role in tire pressures; if their inversely quantitative

kleinblake (Apr 22, 2019 at 18:45)
@Longtravel: they’re certainly related. If your suspension is going to absorb/store less energy by being heavily damped, then I’d conclude that your tires are going to take more of that left over energy and have to be more heavily sprung to compensate.

m1dg3t (Apr 23, 2019 at 6:20)
@dj100procentenduro: Do like every body else seems to be doing and get a credit card. Then max it out on bicycles and spend the rest of your life paying off the interest!

Since you live in a communist country people will still share their vodka with you.

I don't know why I even replied to your comment. You're prolly one of those people who still ride a 26er?!

dj100procentenduro (Apr 24, 2019 at 0:50)
@m1dg3t: I’m cool bro. Ex511 were 29rims when I last checked on my stumpjumper. And come to Poland we have some mountains and trails. I recommend this since it’s my local site youtu.be/xfkr4Rl7XnY
And you don’t have to sip vodkas they have local craft beer on the site

Why is that such a common goof for people?

Yaan (Apr 22, 2019 at 22:39)
Polished with a fine Canadian beaver pelt. You should try it.
Below threshold threads are hidden

Pavel-Repak (Apr 22, 2019 at 6:34)
It's about time for a revamp. Every single full sus has been revamped in 2018/2019 except the sender. The move to 29" wheels is a given but I really hope they go with a high pivot. They have been trying the project disconnect to eliminate kickback and Troy Brosnan has used a 6 speed cassette with a dummy cog. A high pivot setup would reduce kickback and improve the bump sensitivity - win win!

wibblywobbly (Apr 22, 2019 at 8:14)
Have you actually ridden a high pivot bike or have you just read the endless stream of hype about them?

Pavel-Repak (Apr 22, 2019 at 8:31) (Below Threshold)
@wibblywobbly: I unfortunately have not (there was even a commencal demo day at the park, but I didn't know about it), but the concept makes a lot of sense - imagine changing the headangle of a bike from 90° to 0° and then riding into a wall - at 0° the fork would absorb the impact directly without any force going into the chasis. Also the WC results back it up pretty well, with everyone who went to high pivots doing better. There are really only 2 negative traits to a high pivot - a high anti-rise, which isn't a big deal, as the rear brake doesn't do much anyway and the wheel is going to be losing traction on choppy terrain anyways and the 2nd one would be the increasing chainstay length, which could make for weird handling, but that could be useful, as with the stretching of the front of the bike, you need longer chainstays to balance everything, just like Pole does. I'd love to demo a supreme when the demo day is at my local park again.

wibblywobbly (Apr 22, 2019 at 11:41)
@Pavel-Repak: With your name drop of Pole (which I’m going to make the wild assumption that you haven’t ridden one of those either) you have fully established your internet engineer credentials. Hopefully in your next post you can mention Nicholai, Geometron or mixed wheel sizes and win the coveted Paul Aston prize.

Pavel-Repak (Apr 22, 2019 at 12:09)
@wibblywobbly: I admit that I haven't ridden a Pole bike either, but I've heard nothing but good things about the Commencal Supreme and the Pole bikes and I will be picking up either a Supreme or Sender in a few months. Also I'm not a fan of mixed wheel sizes nor Nicolai.

m1dg3t (Apr 22, 2019 at 14:56)
@wibblywobbly: That guy is like a backstage groupie! Jumping on everything that comes through the door. I'd be really interested in his opinions if he had to actually pay out of pocket for what he rides.

I put my money where my wallet is. Things seem to work better that way.

andydhteam (Apr 24, 2019 at 19:27)
@Pavel-Repak: so you want to buy a sender but you just bashed em and said its time for a revamp to high pivot even tho you have never rode a high pivot bike in your life! . your a douche stop believing the hype.
Post a Comment