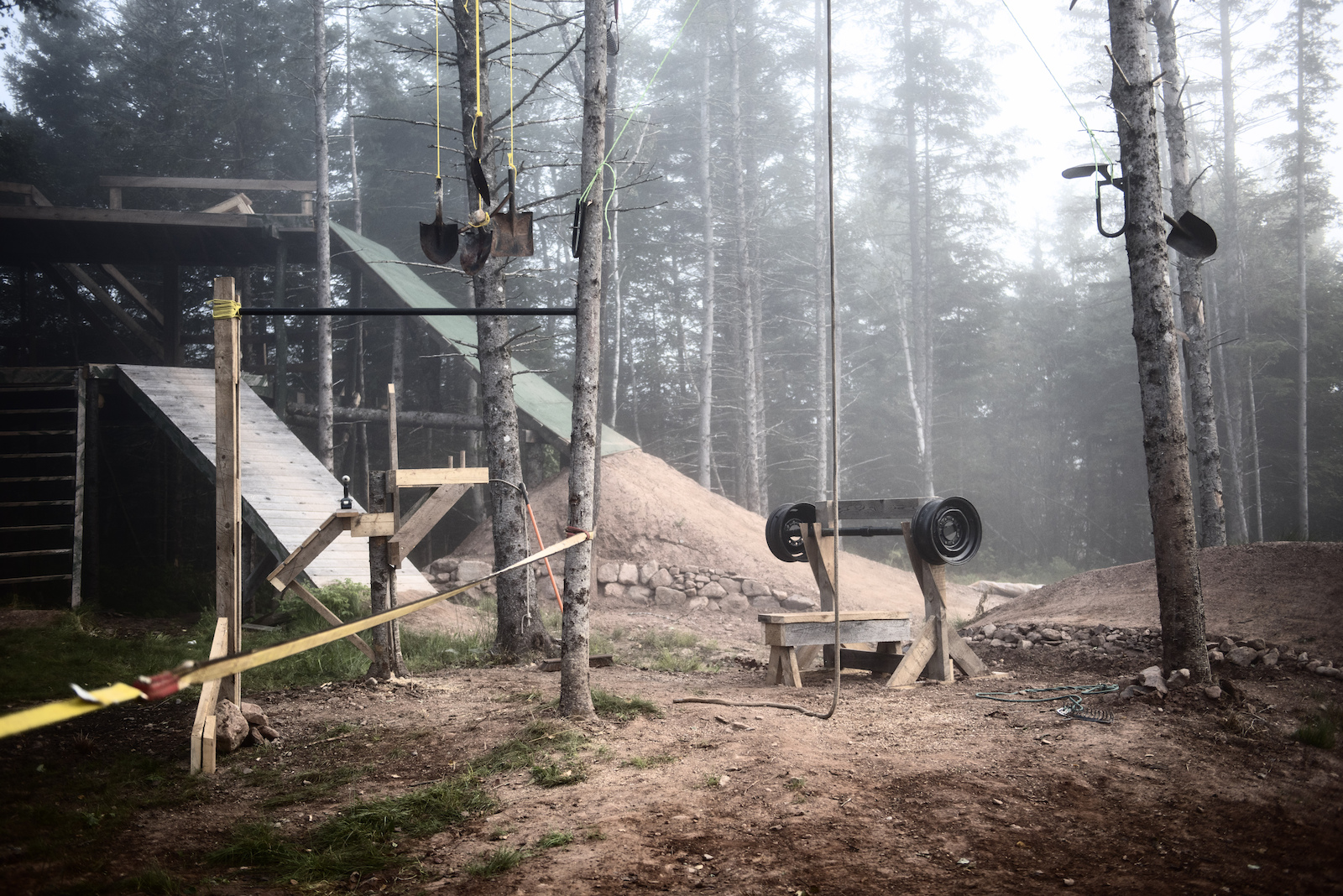 
For the past five years, Matt Macduff has been one of the very best mountain bike street riders in the world. And while he’s a hero to the small subset of die hard street riders, he’s not yet a household name to most mountain bikers. Maybe they’ve seen one of his collaborations with Mind Spark Cinema - Dreams or Project Breathe Easy - but to most he’s just a brakeless nut job, or worse: a complete unknown. 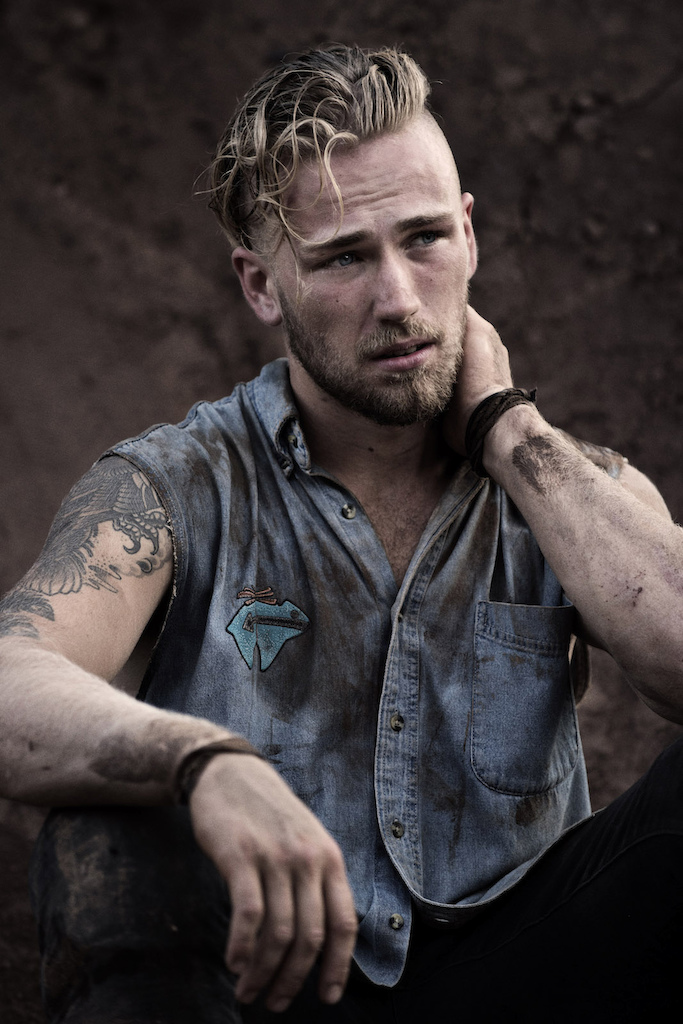 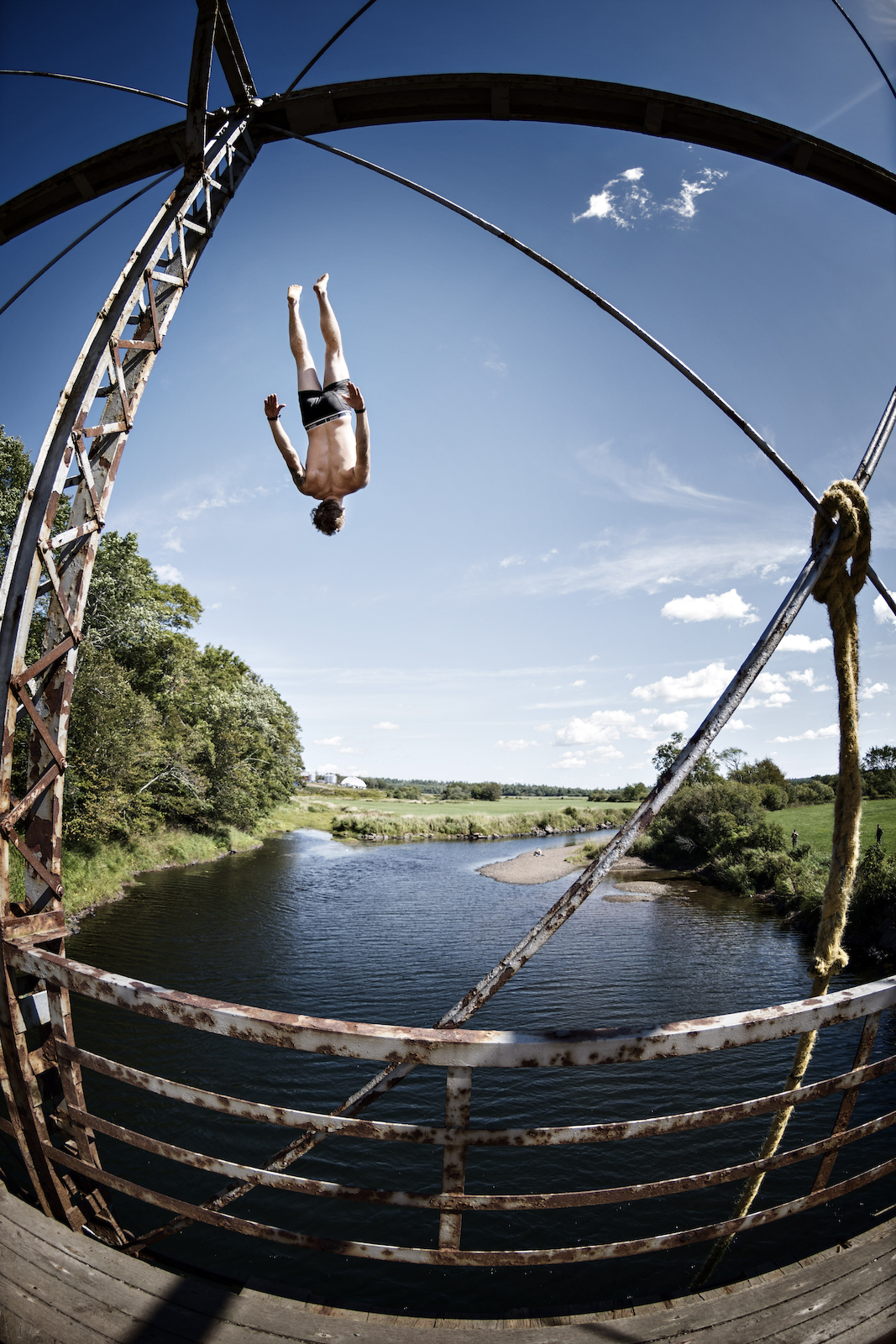 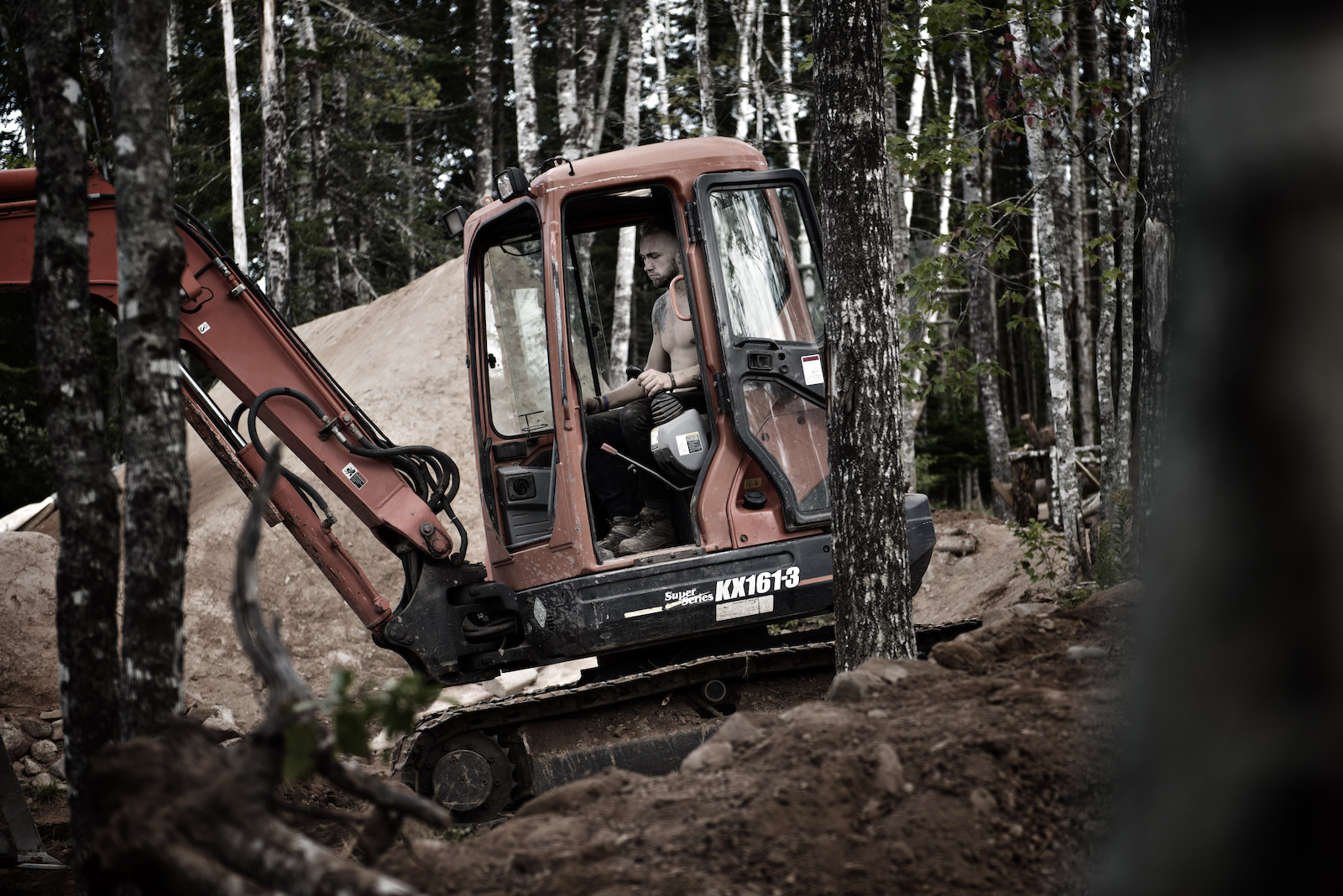 
Matt Macduff, 24, splits his time between Toronto, Montreal, Barcelona, and a tiny hamlet in Nova Scotia known as Brookfield. There’s a property in Brookfield owned by Jay and Kelley Leil which contains the most progressive riding zone in the world, designed and built by Macduff. The Sanctuary of Fun (SOF) is a Willy Wonka-esque fantasy land of loop de loops and seemingly impossible angles. There are stunts here that exist nowhere else on earth, although we’ve seen some of Macduff’s older designs recreated on other slopestyle courses. 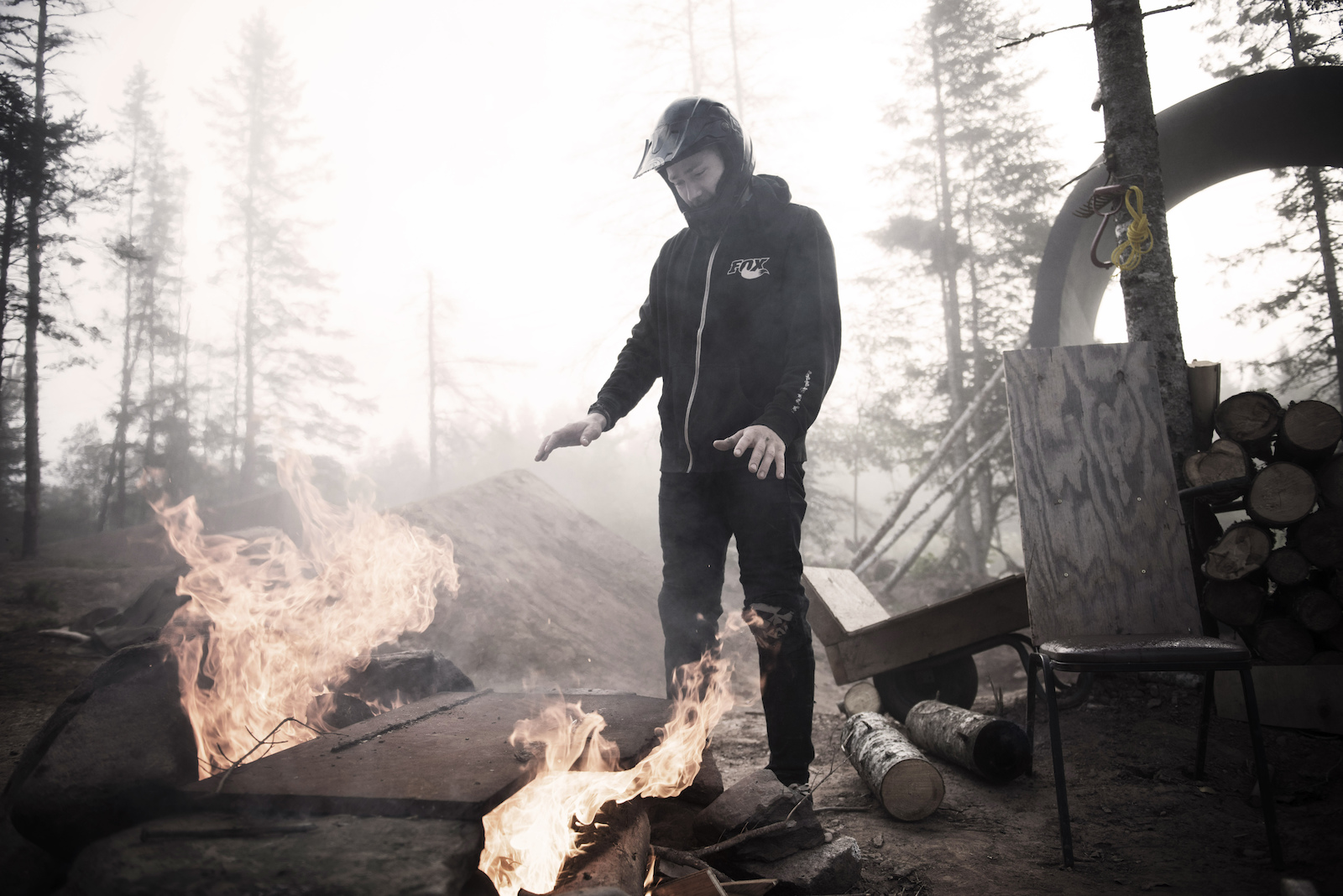 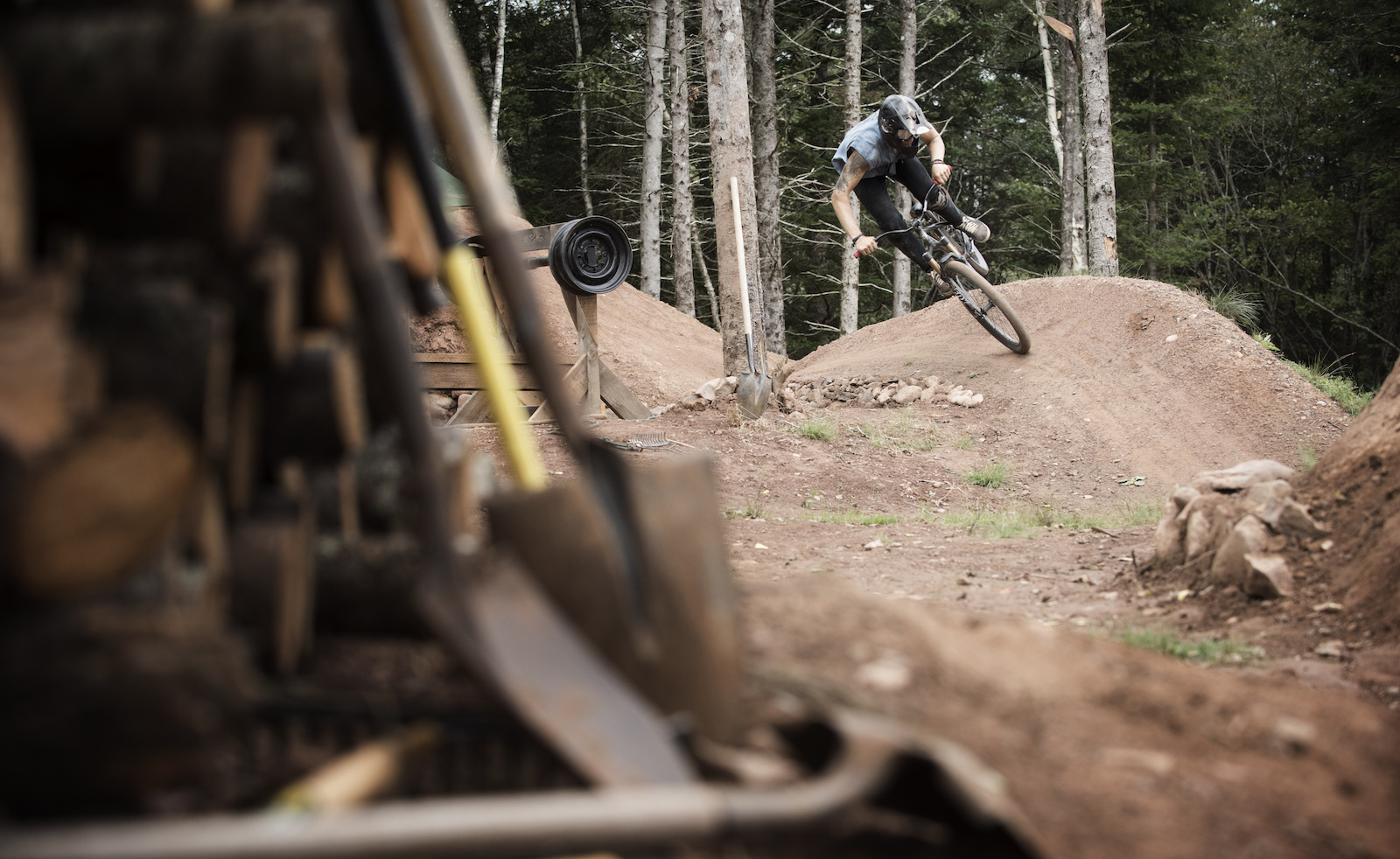 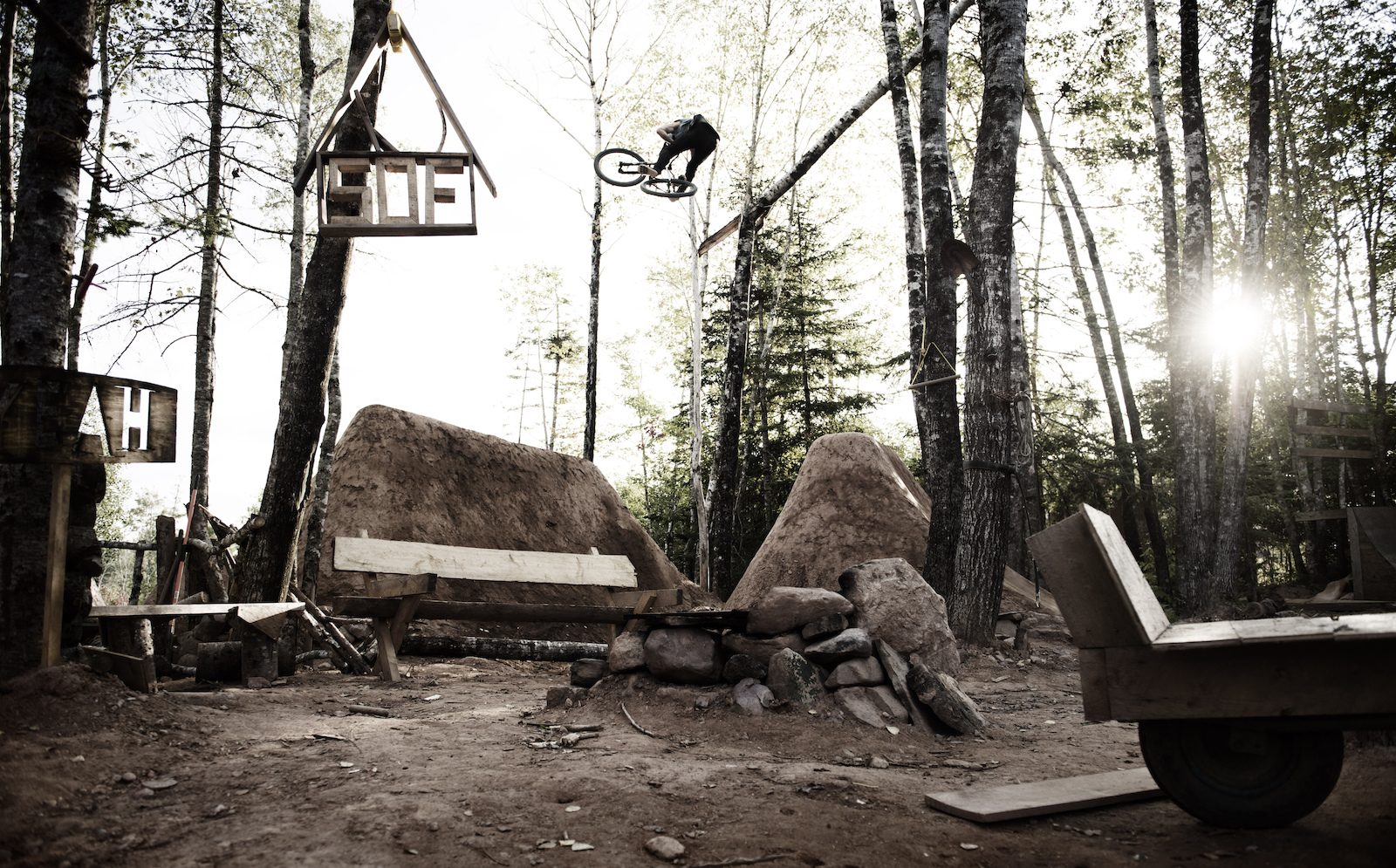 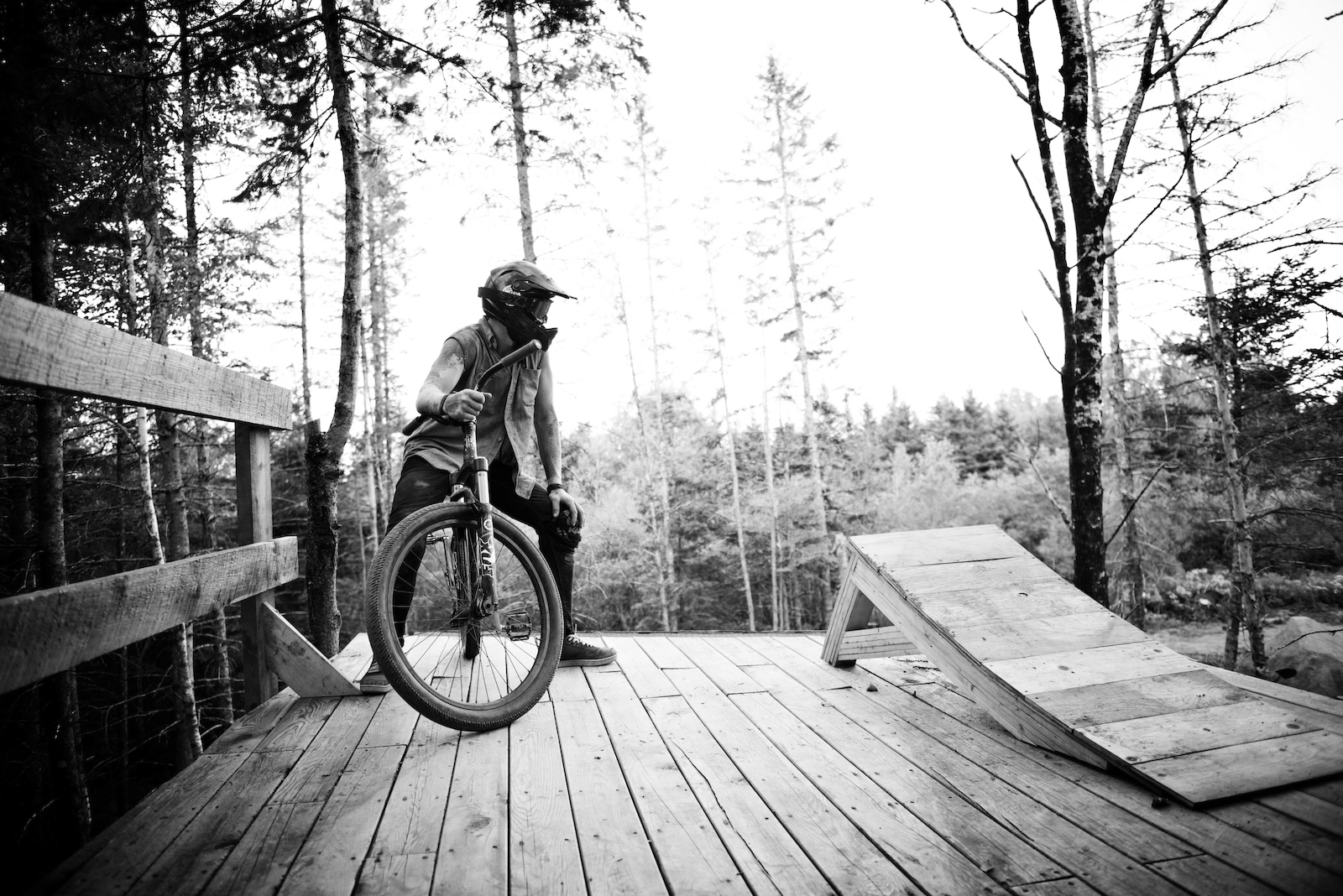 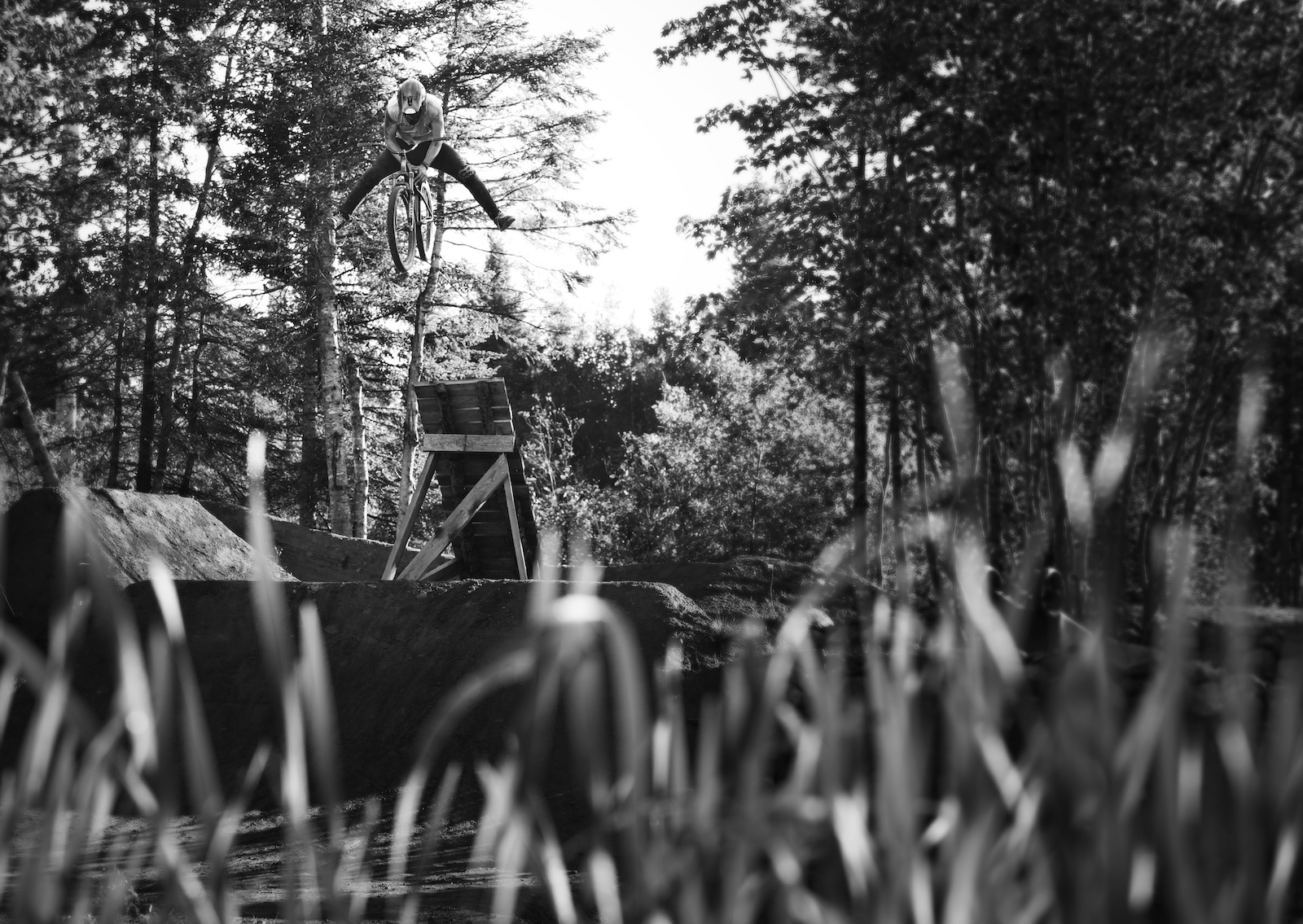 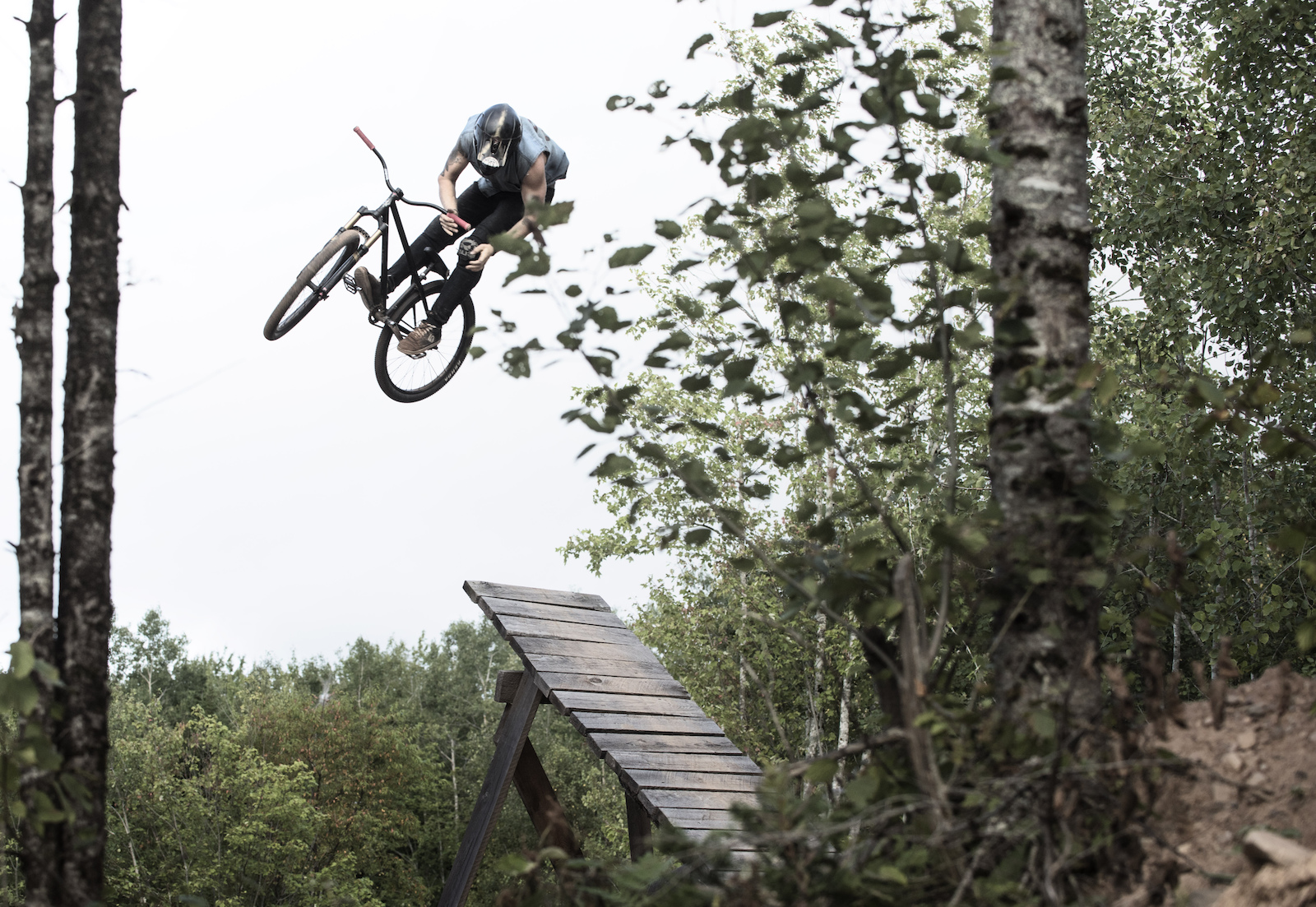 
Macduff is an innovator in a sport that typically sees incremental changes. The old paradigm of building things slightly farther, steeper, and taller seems quaint in the age of Fest. We’re seeing riders trick freestyle motocross sized jumps, but where’s the creativity? What separates freeride from FMX? Macduff’s vision for the sport seems to defy the laws of physics and he mentioned needing NASA astronaut training to ride the features he’s got planned - literally, he’s worried about the potential of blacking out from the g-force while riding. 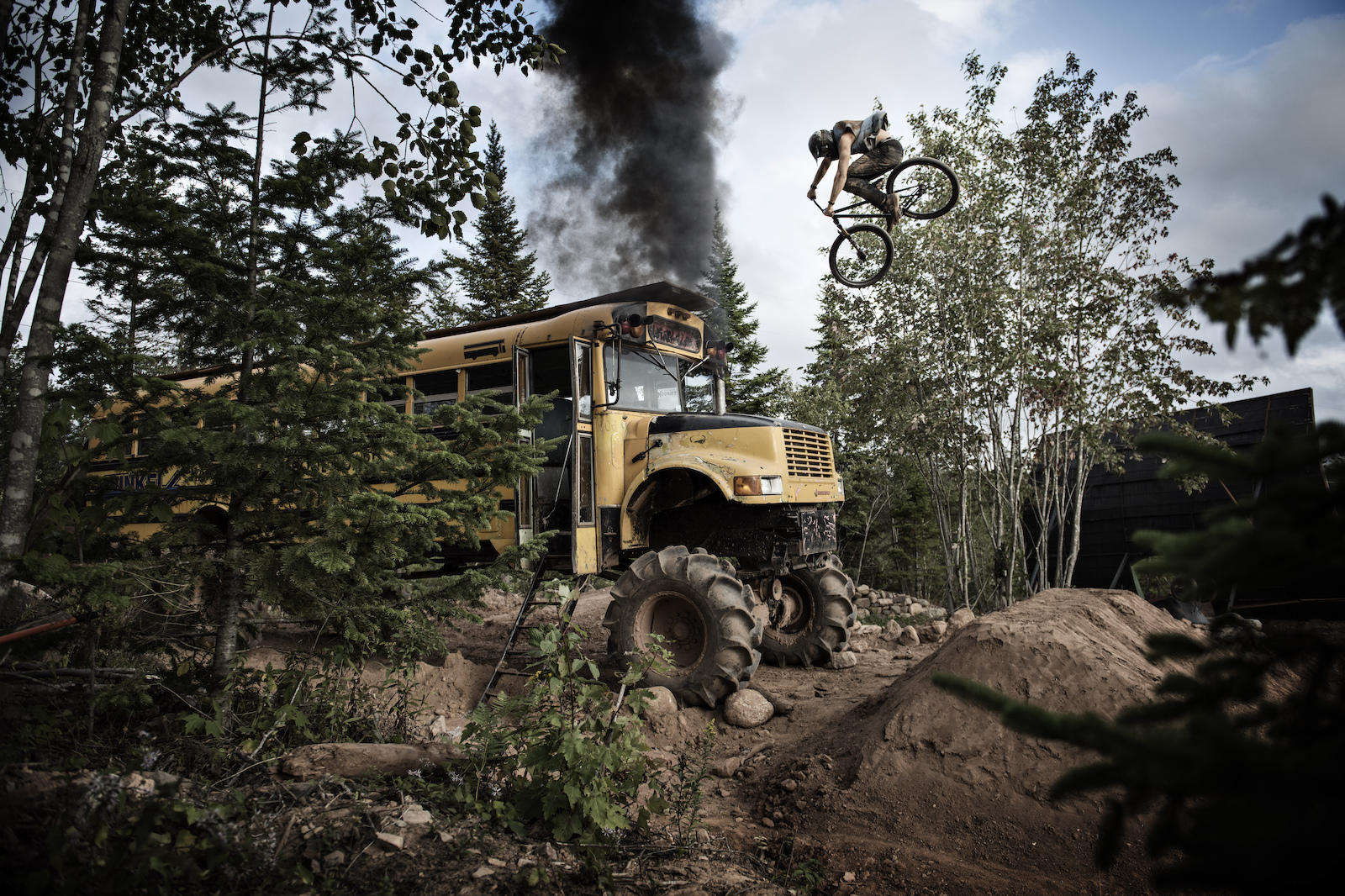 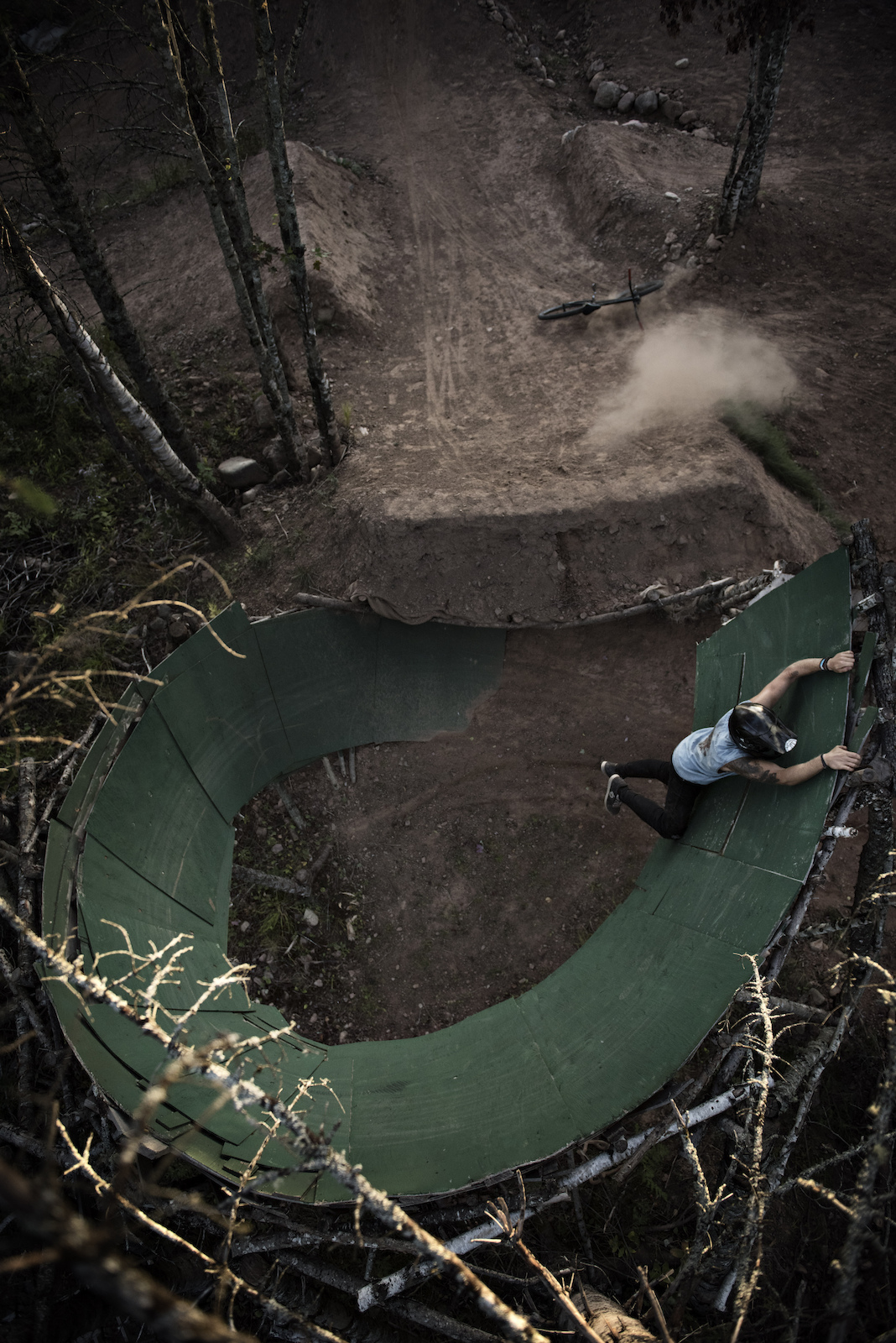 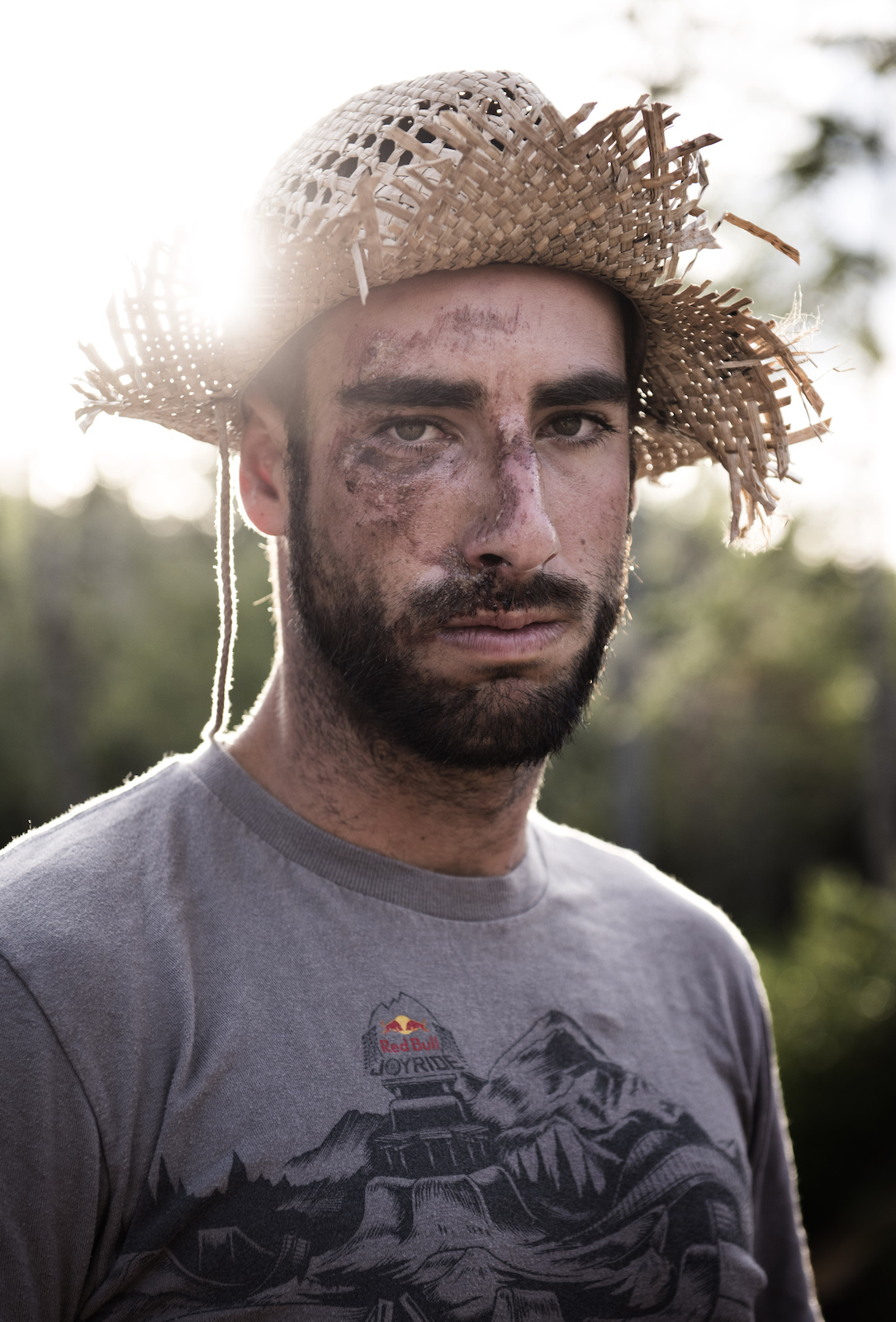 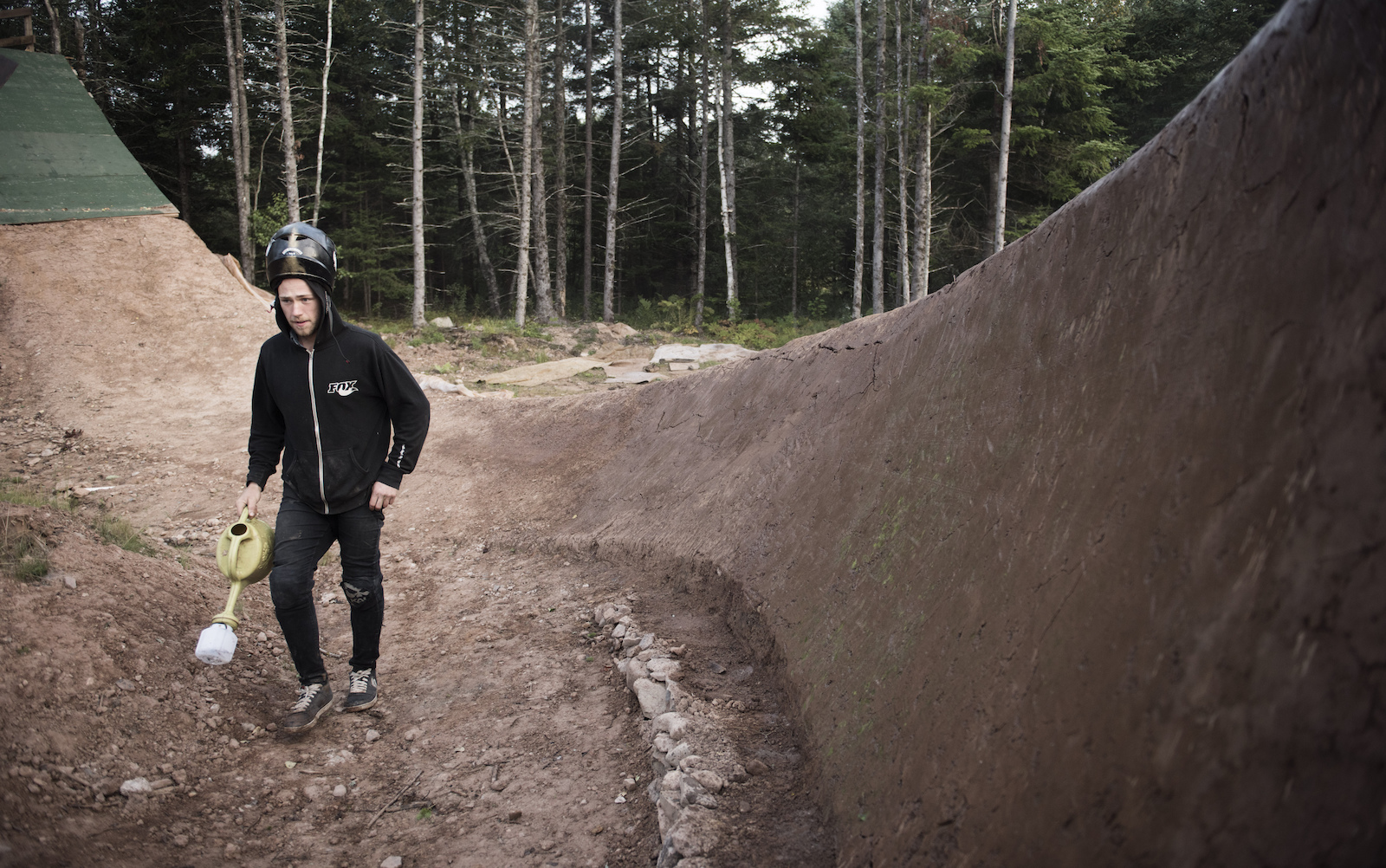 
Macduff’s riding kit is less ‘professional mountain bike athlete’ than it is ‘extra in Waterworld.’ He looks as if he came from a dystopian future to teach us what’s possible on a mountain bike. He looks like the guy your parents wouldn’t let your sister date, or the dude at the centre of every mosh pit at your local dive bar. Macduff, however, is one of the warmest and most instantly likeable humans I’ve ever met. He’s so genuinely enthusiastic about the life he lives that he can’t help but be happy to be alive. One of his favourite lines is, ‘’Best day of my life!’’ And I heard it spoken multiple times, un-ironically, during the shoot. Outside of Brett Tippie, Macduff is the most enthusiastic ambassador for cycling that I’ve met. 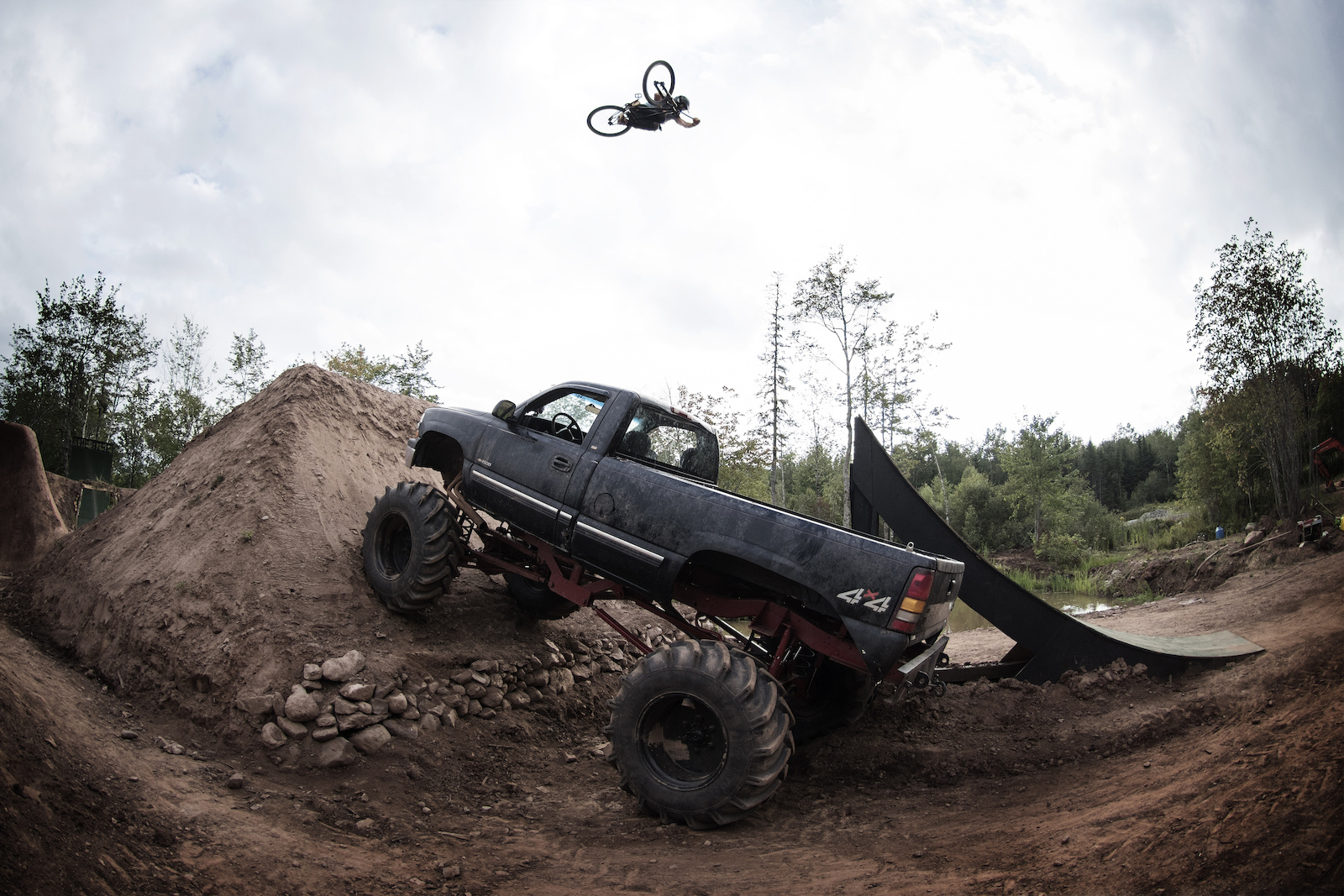 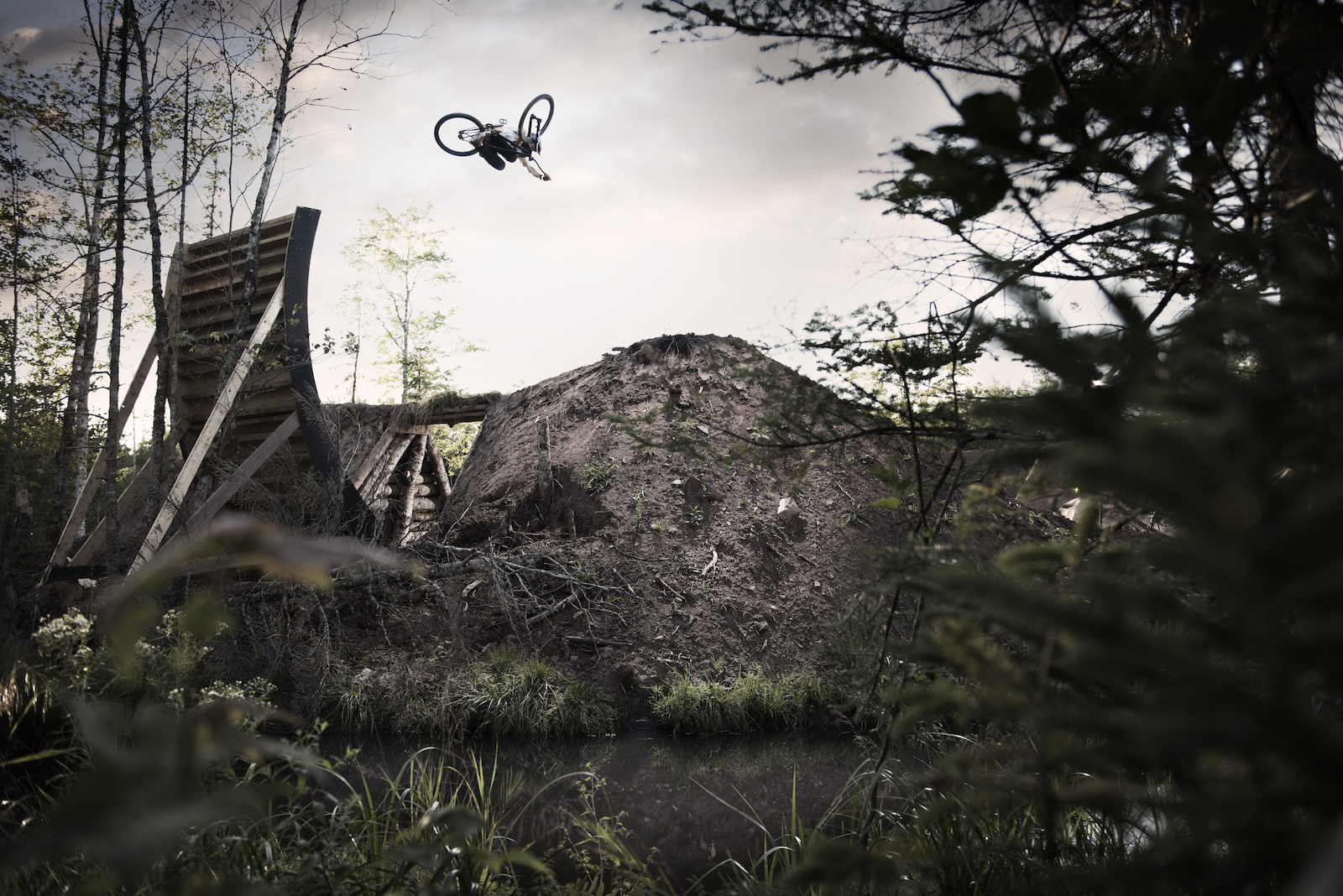 
On our final day of shooting Matt pulled off one of the most impressive moves I’ve ever seen on a bike. It took him several run ins and a few anxious moments, but he prevailed. I asked how he overcame the fear: ’’Sometimes when I get scared, I just think - What would Zink do?’’ We all know what Zink would do, he’d call his shot and stomp the biggest, baddest move in his path. What we don’t know is what a brakeless street rider from small town Ontario will come up with next. If money and time were no object, what would Macduff do? 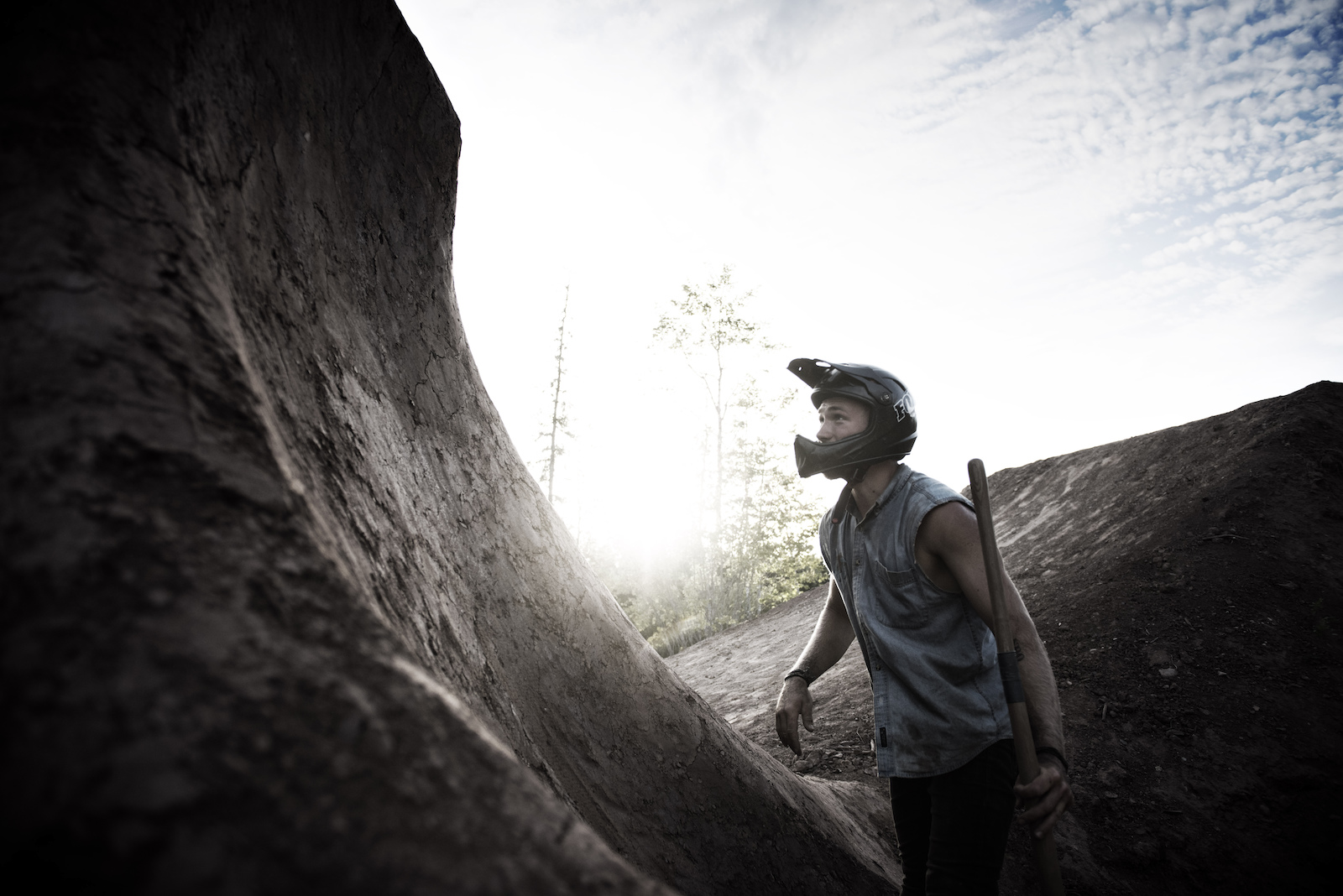 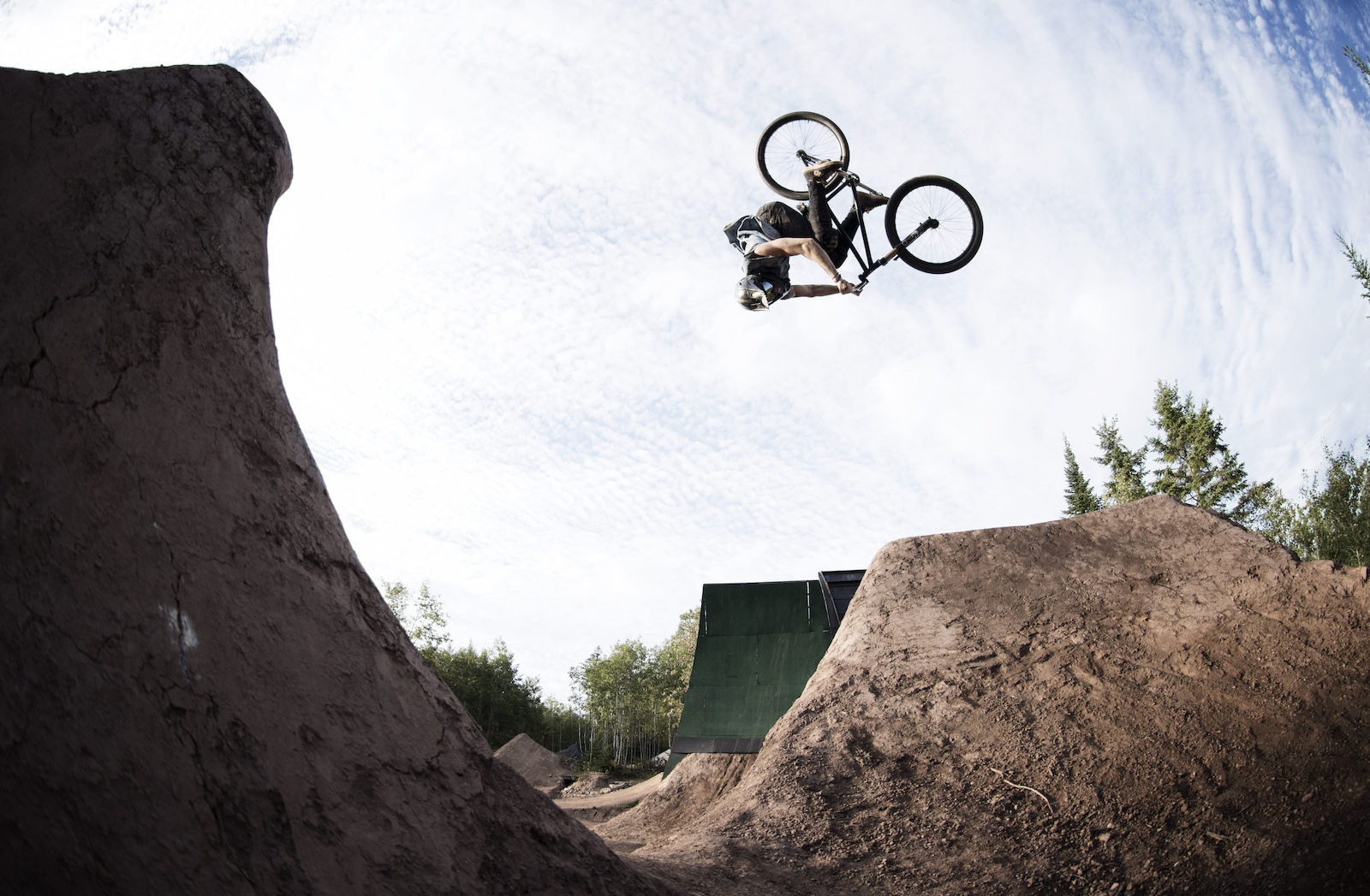 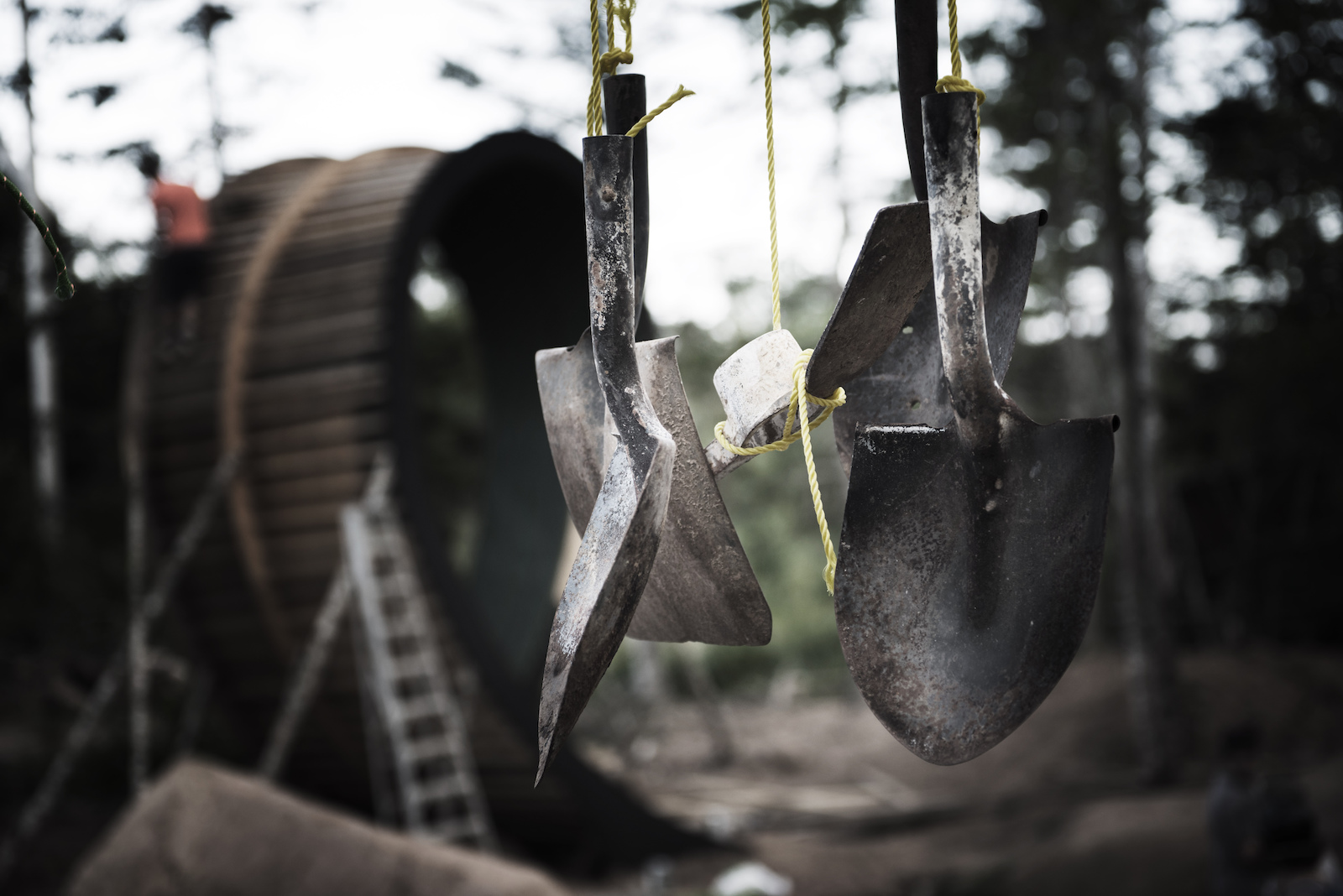 MDRipper (May 25, 2015 at 5:02)
The last feature was insane, but i gotta say i liked that fakie three / three half cab or whatever you call it off that bus drop. I saw a vid of a guy trying to do it off of el toro (20 stair) and almost died, i cant imagine hittin a drop backwards let alone doing a three backwards.

scott-townes (May 25, 2015 at 9:42)
180 to fakie 180 I think is the right term but what a scary trick... that school bus is so sick and I think that's the closest I've seen to doing a corked 180 on a bike or off when he did that opp 180 in the open loop/ inverted quarter pipe hit... I just realized that MTBing doesn't have terms for half the features and shit he did in his segment, haha.

AndyMandura (May 25, 2015 at 5:17)
Haha, "What Would Zink Do?" YT Industries should pick up Matt Macduff. Redbull too, with all these crazy features hes hitting, and building, he needs support.

bretttippie (May 25, 2015 at 10:24)
Matt is punk rock and a friendly cat at the same time. Sick rider and great guy....but you should see him cook rubber bullets!! (KD Mac and cheese....anybody have that video link? Haven't laughed that hard for a long time!) Rock on MM!!!!

pourquois-pas (May 25, 2015 at 6:13)
So glad to see MacDuff getting the exposure and respect through Builder.

I remember a few times at Joyride hearing some cat hooting and hollering and having a grand ol' time cruising around the street section and it would always be MacDuff riding behind a smile.

This quote, so good: "I am just haunted by my own potential, and if I don't answer, I don't sleep"

scottsecco (May 25, 2015 at 9:49)
@Skootur We'd love to have a New Zealand show or two and as @HutchJR said, you're welcome to organize one! We rely on local trail clubs/bike shops to book them, so if you'd like to see Builder in your town then find a venue and send us an email.

russthedog (May 25, 2015 at 1:27)
nice article on a rad rider. the reference to not being known struck home with me - a year ago i really had no idea who he was, and then started seeing bits and pieces pop up such as cherrybomb, darkness etc. At first i just thought he was a dude, but his riding now is what blows me away, so good! I really look forward to more of his stuff

steezysam (May 25, 2015 at 15:49)
Had the pleasure of meeting matt at a contest and he spent easily ten minutes just talking to me about project breathe easy (his sister has cystic fibrosis and I lost a friend to cf) and everything that went into it. He then proceeded to ride part of the slopestyle course backwards, turning stepdowns into stepups, and just effortlessly flowing everything in sight. Awesome guy, awesome rider. I'll be buying a copy of Builder to help support him as much as anyone.

ldhbaker (May 25, 2015 at 8:28)
MM's section was mind blowing. Slopestyle / DJ can easily become stale or uninteresting in movies, but this section was the opposite, with innovative features, tricks, and a couple of characters. Amazing work by Matt, Scott and Marc-Andre!

onecutmedia (May 25, 2015 at 7:03)
Matt is one of the best dudes I know, Its been about 5 years now, Since the opening of Joyride150.
He has time for everyone and still manages to rip the roof off the place

Its an Honour Matt

Hey spons, how about you bust out your wallets & get this shit rollin' so we can find out what the Duff would do, huh?

Not yet a household name to most MTBers, yet for me myself personally, nothin' gets me more pumped when I come to Pinkbike than when I see this dude's name on the front page & I bet a lot of others can say the same. He's the rider I'm most hopeful to see sometime at JR150.

jeffrupert (May 25, 2015 at 16:09)
Stoked to have been part of the making of matt's segment, he threw down some crazy shit for sure, that 180 half cab off the bus was one of the crazyiest things I've ever seen, and Matt is hands down one of the nicest people iv ever met, and same with Scott, can't wait to see what sof has in store for this year

mnorris122 (May 25, 2015 at 4:37)
It's true what that paragraph said, Macduff is honestly one of the nicest, most down to earth people you'll ever meet. He's also absolutely bonkers on a bike. Mad respect

joaquinRDiert (May 25, 2015 at 8:14)
Matt is already one of the big ones in of MTB and I think in the future he will be the 'Pasrana' or 'Matt Hoffman' of our sport, but he will be Matt Macduff, the one and only, in his own kind of greatness

mattyaa (May 25, 2015 at 14:00)
I've had the pleasure of having lunch with Matt a few years back while riding with a group of buddies at Joyride in Markham, Ontario. It was a few months before he was leaving to Nova Scotia to start working on Project Breathe Easy. I can genuinely say he was a really rad guy to chat with and his enthusiasm and passion for freestyle MTB was really clear, he was so excited about his trip and all the plans he had. It's been so awesome to see his projects come to life, and to see articles like this on the front page of Pinkbike. Kudos to Matt for being rad and always pushing the boundaries!

gclarida (May 25, 2015 at 11:03)
Man, i hope this dude gets picked dup by some one awesome who just throws cash at him. It would be insane to see what he could do with funding.

ajaxglory (May 25, 2015 at 8:53)
I remember riding with Matt at the Toronto Bike Show years ago, when our biggest tricks were barspins and 360's. Way to go man, you've come a long way, keep going

dawgdude (May 26, 2015 at 21:56)
Great read and that was a sick ending segment on Builder! I never heard of him prior to this so it was a real treat! The video and his riding style portrayed him as rugged and raw which is cool. It's funny to hear he's a nice hearted dude. Mad skillz!

JoseBravo (May 25, 2015 at 6:19)
if you like street make sure to follow 'the rise' here on pinkbike. They have tons of good videos featuring matt

AlexGustavsson (May 25, 2015 at 7:16)
Bright future coming up for this bad ass MFer! best segment in the movie for sure

LindLTaylor (May 25, 2015 at 5:16)
Met him at Highland once. Super passionate about riding and an absolute blast to be around.