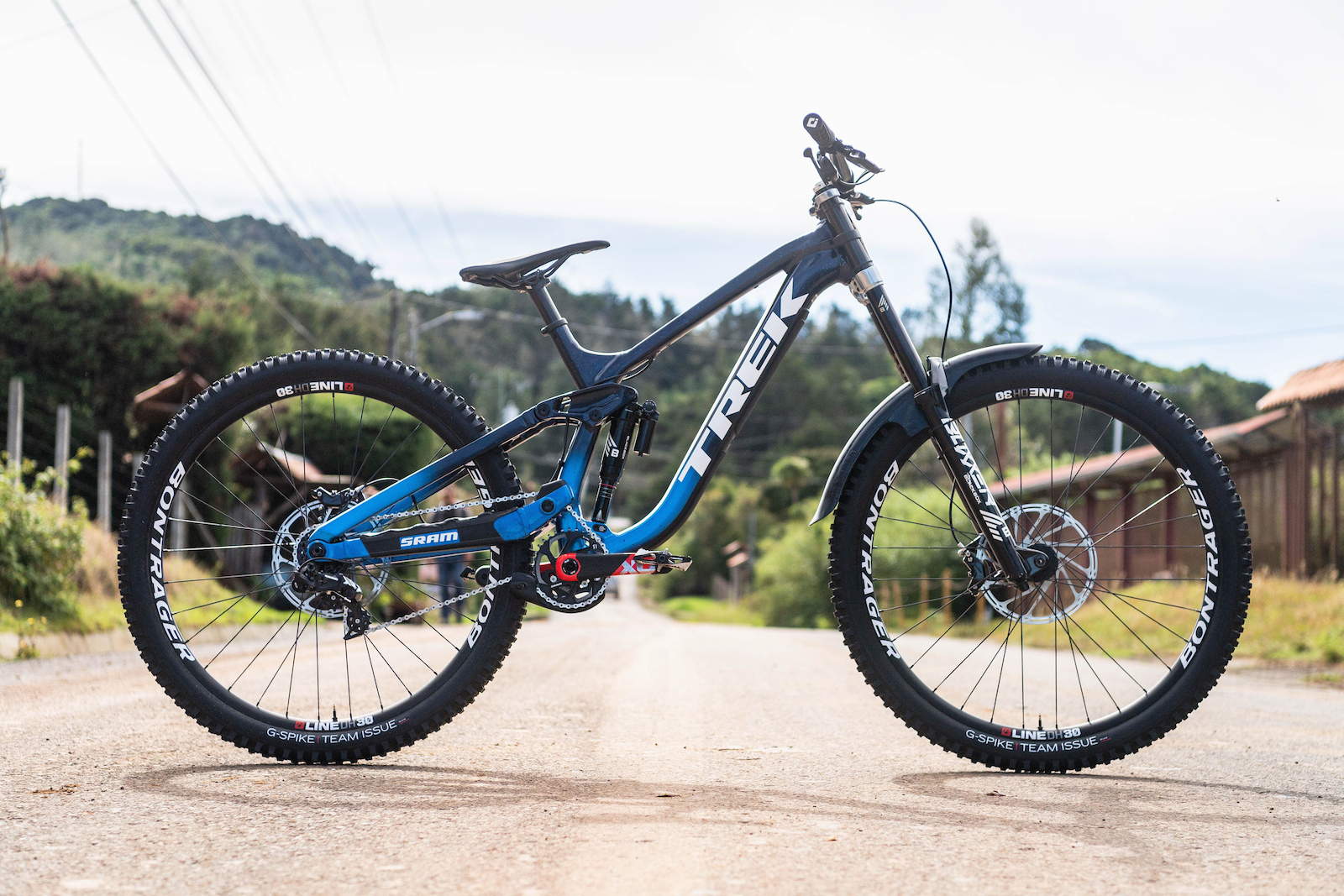 Charlie is riding the newly released high pivot Trek Session in early season races this year. He's on the R2 size which yields a 465mm reach and 445mm chainstays with the chip set in the 'Mino Low' setting. He has the progression adjustment set at 25%.

The bike can be run with multiple wheel sizes, and Charlie prefers to run it in the full 29er setting. In its short existence, the bike has proven to be successful for Charlie as he's taken the win at both the Windrock Tennessee National, and the Costa Rican Open DH in two very different course conditions.

Outfitted with a RockShox/SRAM set up, Charlie's bike has a number of special touches including some pre-production Blackbox bits.

Charlie runs 780mm bars and typically no tire inserts, although if the track calls for it, they'll make an appearance. Tire pressures range from track to track and depending on conditions but typically in the 23-29psi range.

His exact suspension numbers aren't available for public consumption but the bike is pretty consistent from track to track and supportive enough to manage big compressions and hits for him at 6'1" tall and 170 lb. 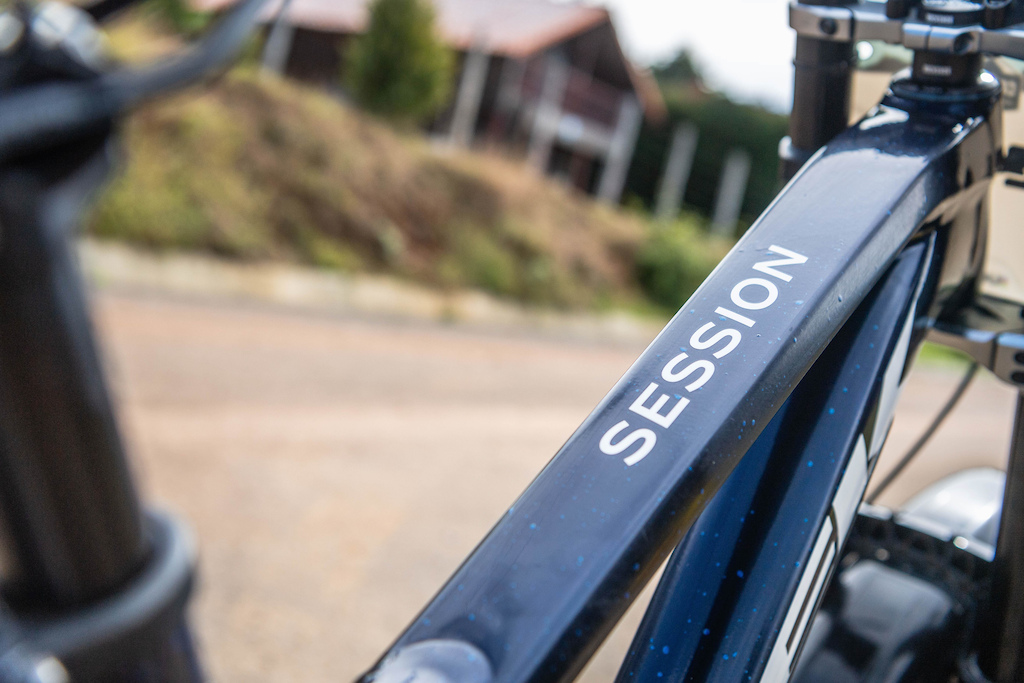 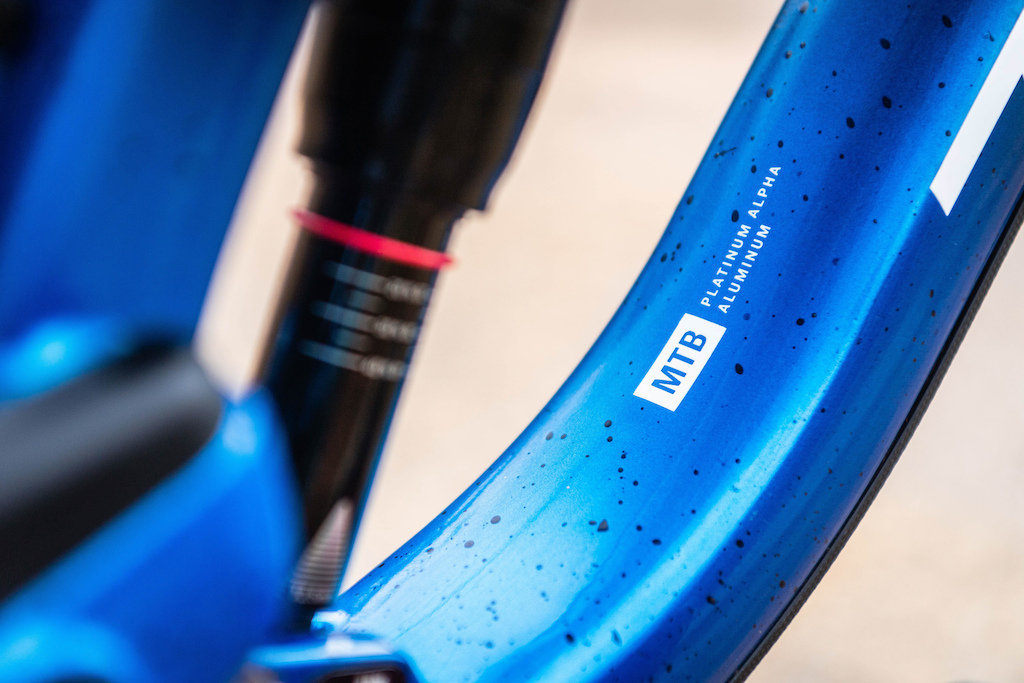 The new aluminum frame comes with in what Trek calls a Deep Deep Dark Blue finish. 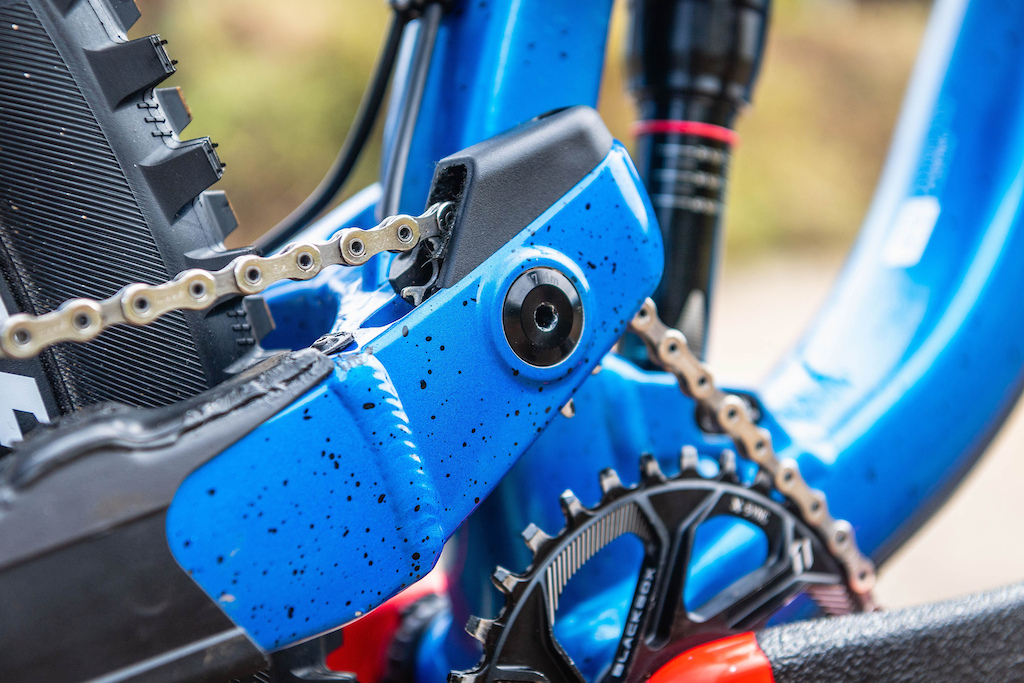 Trek's new Session high pivot is one of the most talked-about changes to the bike along with the solely aluminum frame. 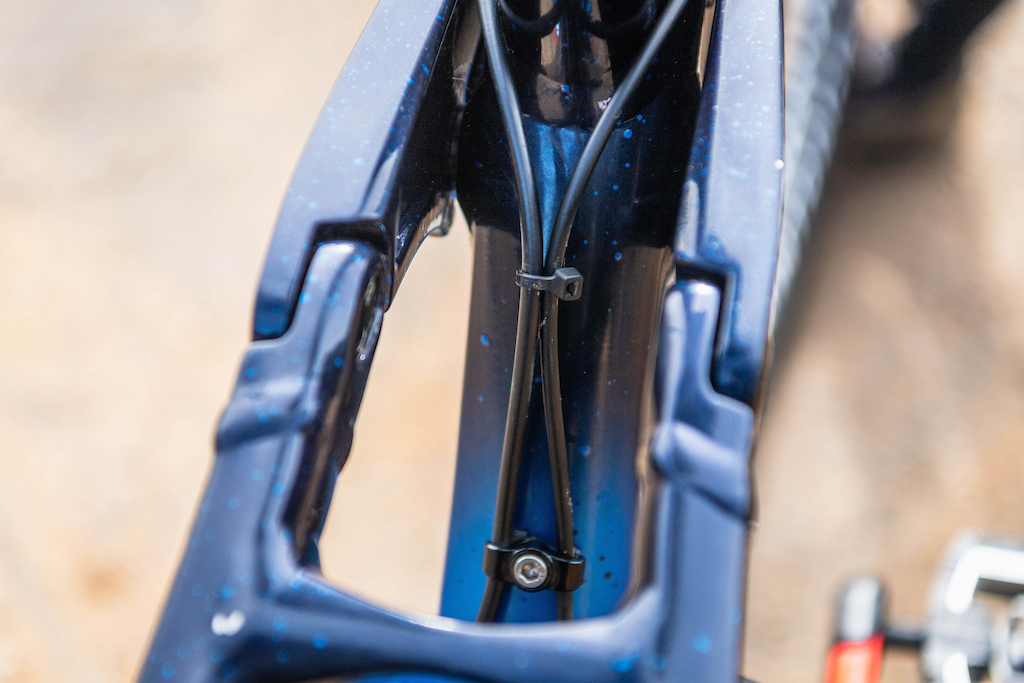 Both shifting and braking cables come down the backside of the seat tube. 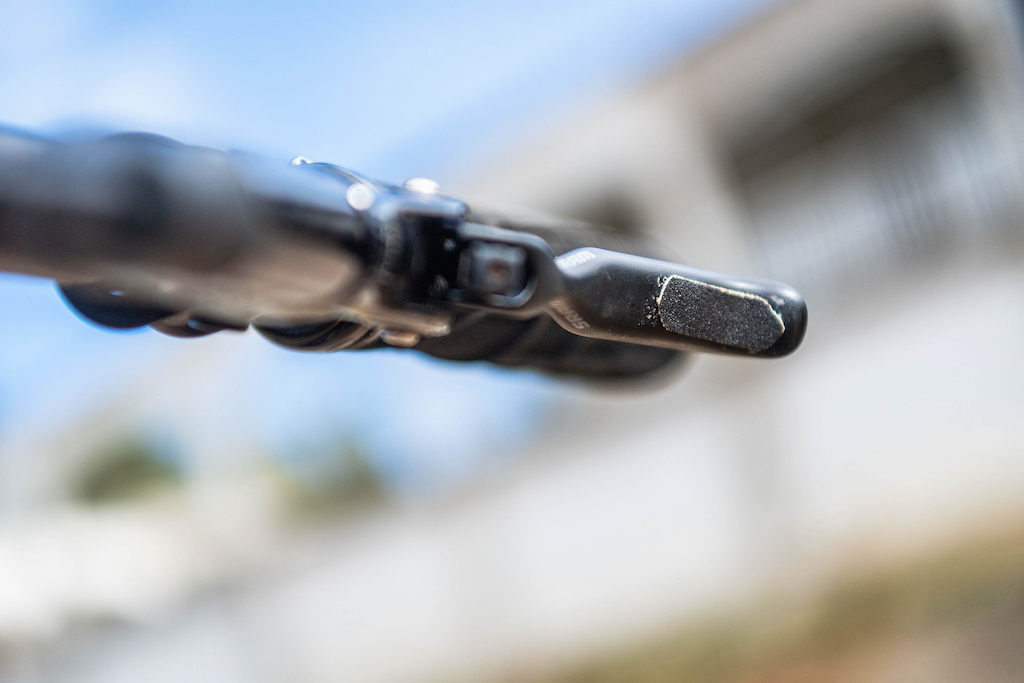 A small strip of grip tape was added to the levers in order to maintain control in the wet conditions here in Costa Rica. 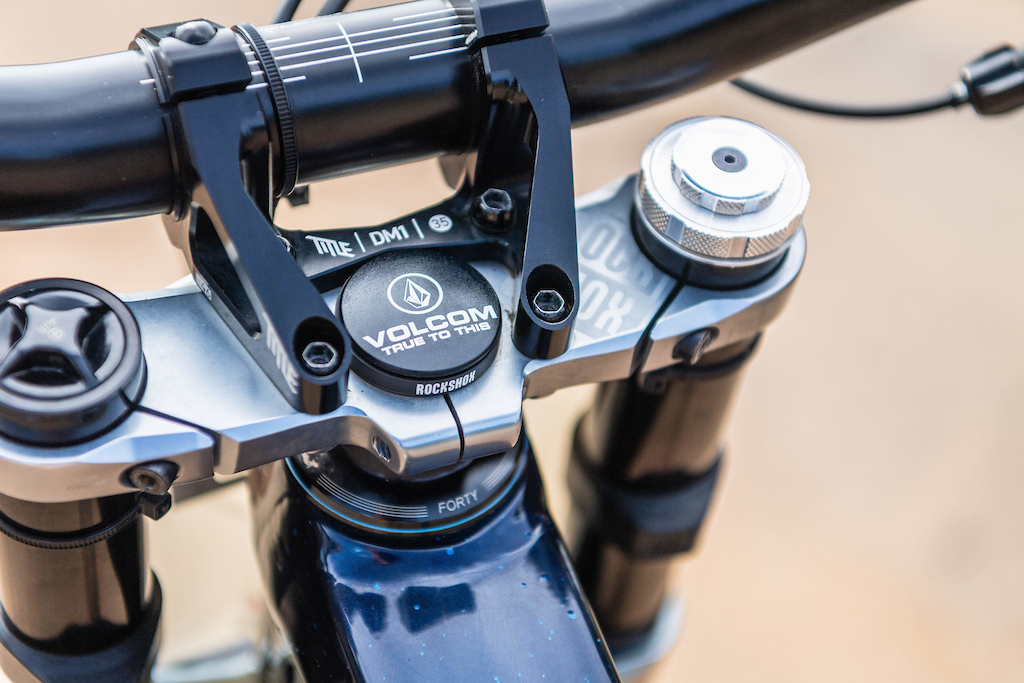 Special stem cap by Volcom....and check out those shiny compression dials on the Boxxer. 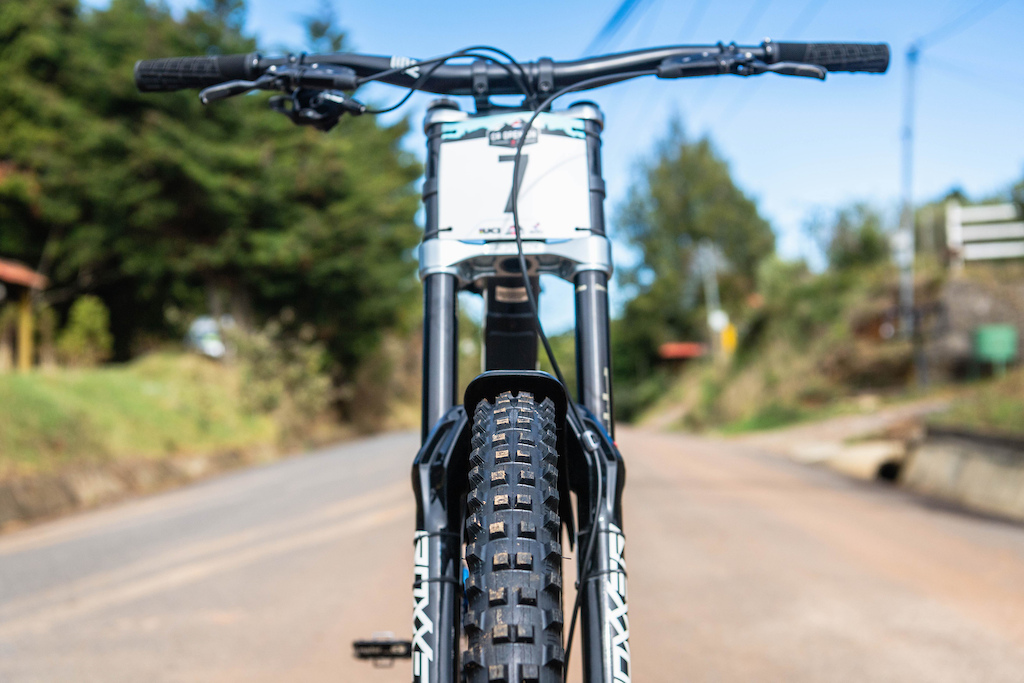 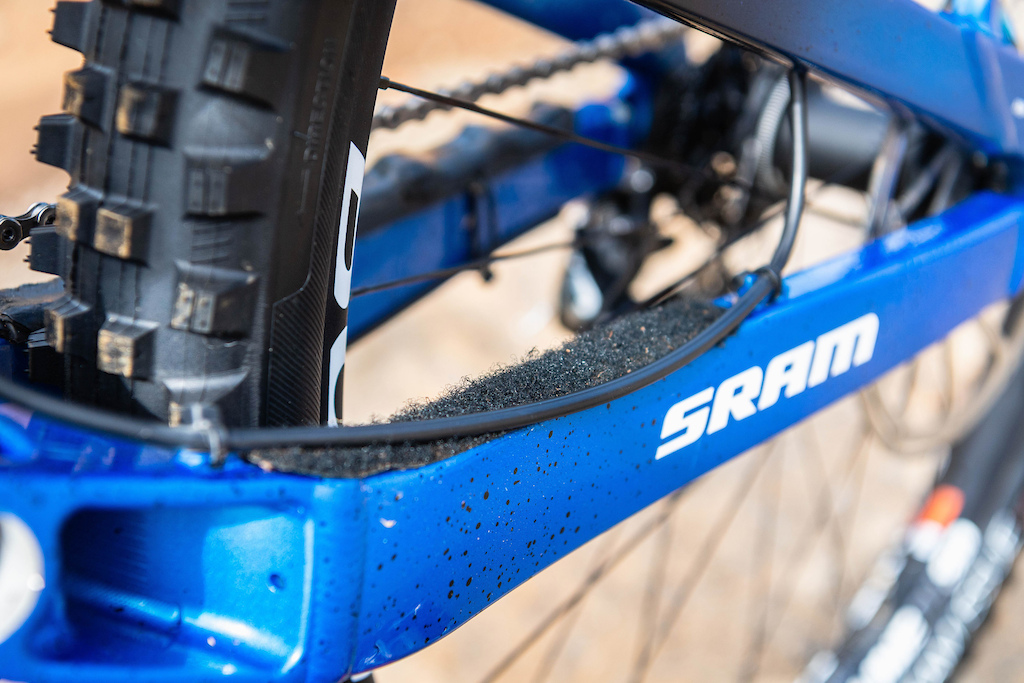 A strip of velcro was added to cut down on wear and to also allow cable movement. 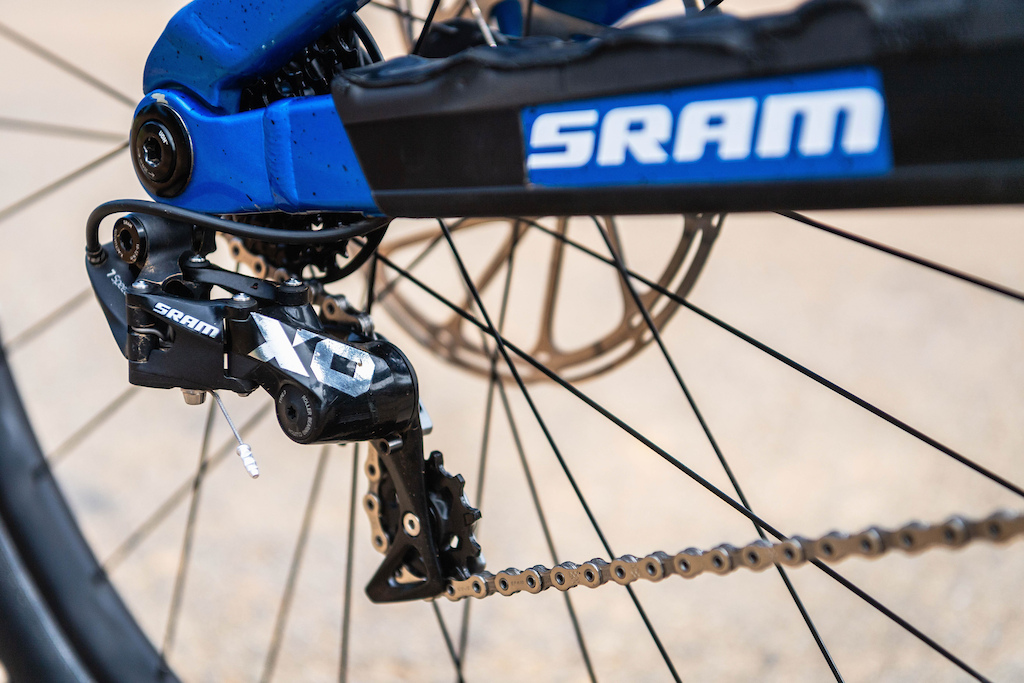 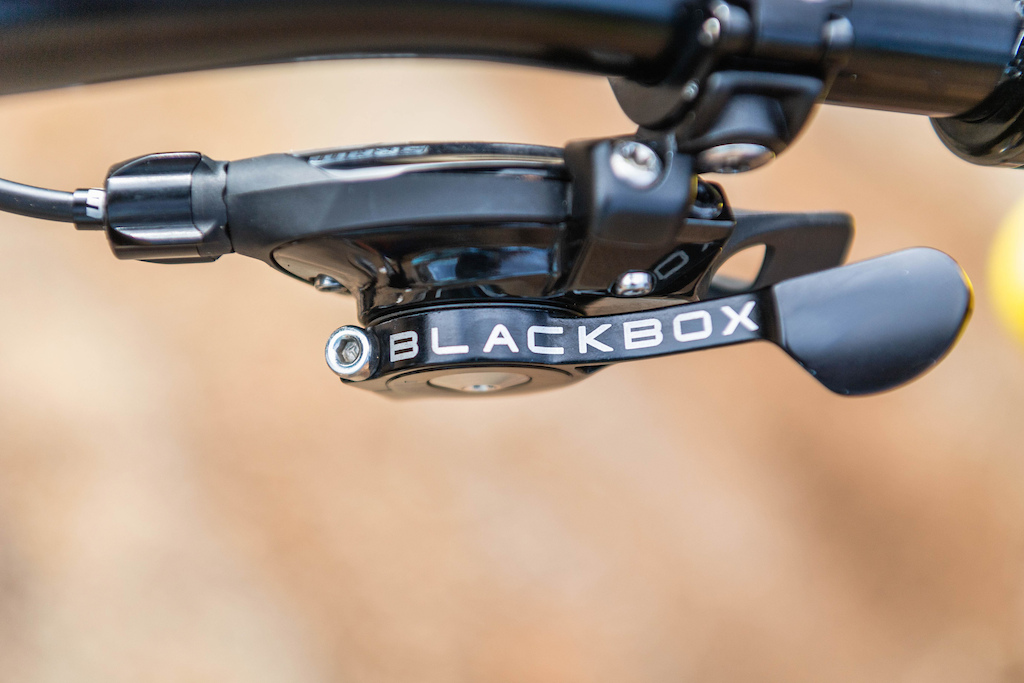 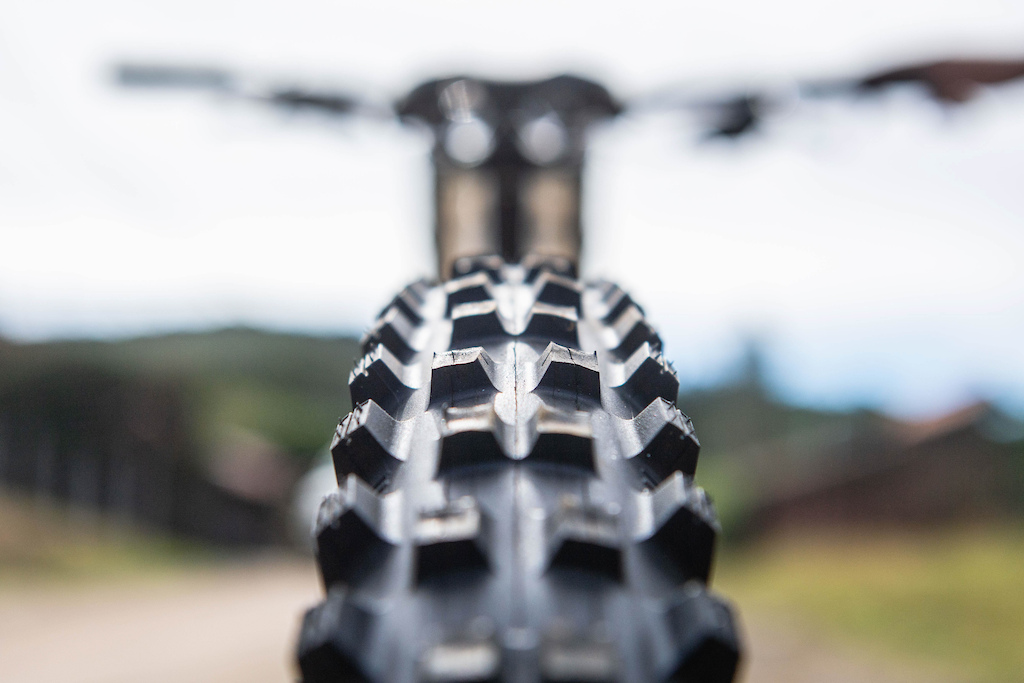 The Bontrager G-Spike was the tire of choice for Charlie at La Lucha. He chose to trim the center knobs and leave the sides, allowing for less rolling resistance and a more predictable feel in the mud. 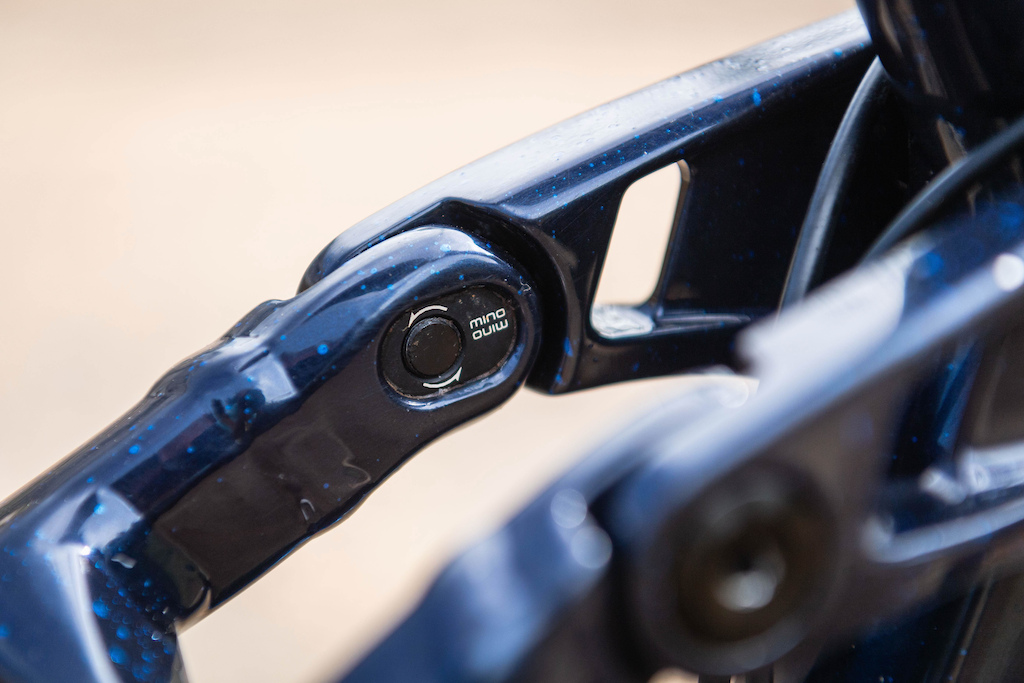 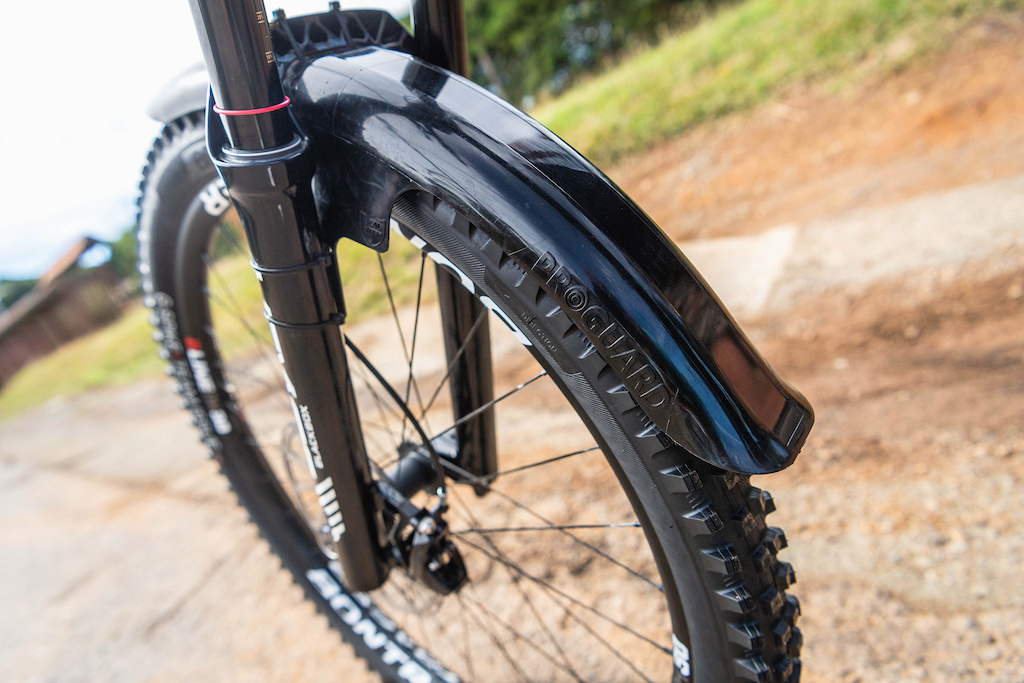 A Max protection Proguard was the go-to in the wet and rainy conditions. 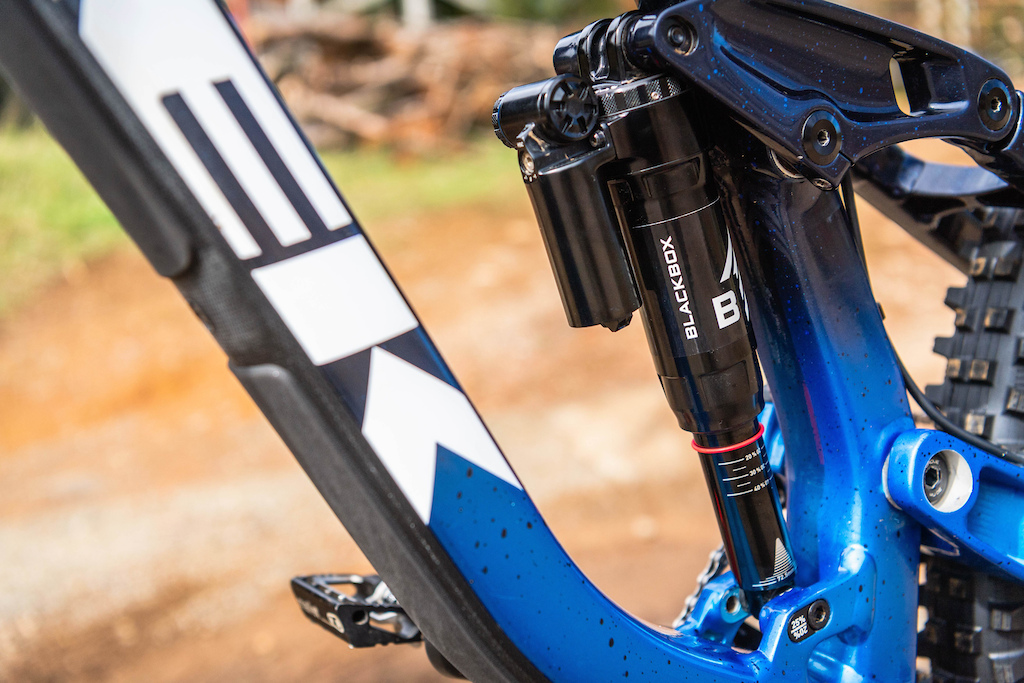 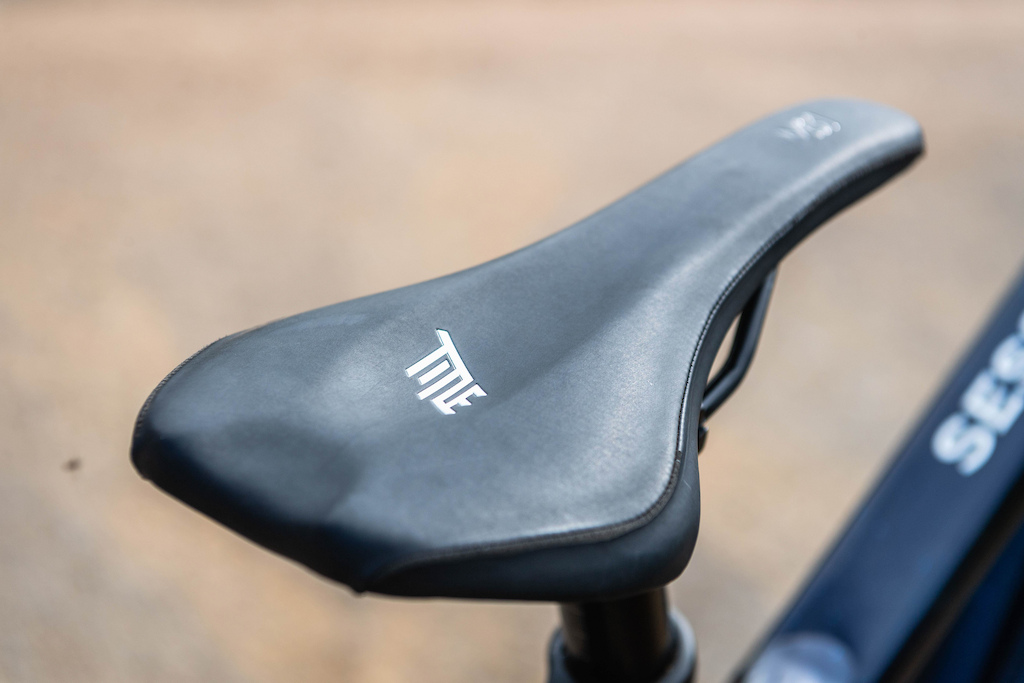 A seat from Title, Brett Rheeder's component brand.
For more technical information on the new Session, check out our First Ride impressions here.

jawright602 (Apr 16, 2021 at 14:07)
Volcom needs to make MTB clothes, they already make my favorite outerwear for snowboarding. If you guys are reading this make it happen.

AJayTCP (Apr 16, 2021 at 14:23)
Volcom pants are amazing for BMX and Skateboarding. Amazing stretch and toughness from the few models I have tried that were marketed for BMX. A little tight for my thunder thighs but I liked that they had a gusseted crotch to prevent embarrassing blowouts when hiking your leg over a bike.

extratalldirtrider (Apr 16, 2021 at 14:39)
Heck yeah. They make some of the best snowboarding outerwear.

mrpfp (Apr 16, 2021 at 16:00)
@mackay66: Looks like they have taken existing products and shown them as MTB friendly with a sick photo shoot.
If they end up making some MTB specific gear then I am in.

He doesn't actually know does he lol

chickenlassi (Apr 16, 2021 at 21:30)
The point is moot anyways. I don't know the number of clicks but here's my guess. If there's 30 clicks of compression it's about 28. And us mere mortals are definitely not riding like that.

adrennan (Apr 17, 2021 at 8:42)
@chickenlassi: and unless you weigh as much as him and ride like him (you don't), suspension numbers just really don't matter that much.

davidrobinsonphoto (Apr 17, 2021 at 0:17)
Some online shop already listed the Zeb fender as compatible with "Domain", which indicates they're bringing back the name to be the new DC 38mm fork.

Cutty-professor (Apr 16, 2021 at 17:04)
Everytime I see a race bike it has grip tape on levers/paddles and extra padding around chainstays and cables.

They have definitely improved from 10 years ago,still these details should be sorted from factory.

And while your at it spec bikes with tyres with proper casings for the purpose.

zyoungson (Apr 16, 2021 at 18:23)
I personally can't stand drilled brake levers, and have never had a problem slipping off. Don't understand why people need grip tape on there to tear your fingers or gloves to bits. Will take a nice smooth lever any day. Each to their own.

DAN-ROCKS (Apr 18, 2021 at 20:26)
yess my slash came with 120tpi single ply tires. they were sticky and supple yes but first time i went to ride something technical i couldn't get anywhere without a flat! It's an enduro bike! no one uses paper tires!

, its interesting. It'll be interesting to see what Manuf's do. I seem to see that guys that can SERIOUSLY ride, tend to want more agility than the extra stability...which means that todays bike sizing has them dropping a size. Lee McCormicks bike sizing, general method is your height in CM x 2.5. Which in this equals as 463 and that should be your target reach +-. So maybe there is something legit to that for guys that slay.

magnoblox (Apr 17, 2021 at 6:14)
@Linc: 100%! Most people I see at the bikepark at 175-180 cm ride either a large or xl. Its of course dependant on your ape index as well. If you have abnormally long arms you might go up a size but I think loads of people ride bikes that are too big for them. It also makes it way harder to find mediums on the second hand market.

Mondbiker (Apr 19, 2021 at 1:43)
@Linc: One of those bad riders won world champs few month ago. I think he should just give those rainbow stripes to the 2nd guy and go home, shame on him for riding XL while being 5ft7in.

ksilvey10 (May 13, 2021 at 10:31)
These have to be spec tires. NONE of the G-series lineup, including the G5 is tubless ready. I know because I bought one never guessing that the tire that apparently these world cup pros (and EWS too) run would require a tube. But it does.

magnoblox (Apr 17, 2021 at 6:11)
Does the suspension design have a regressive leverage ratio curve? That could explain it.

MrNally (Apr 17, 2021 at 7:24)
Yet another top tier rider on a sensibly sized bike. Dare I say many brands have better sized DH bikes than Enduro bikes?

magnoblox (Apr 17, 2021 at 6:16)
You dont think team riders are on a special blend or prototype tires. I havent tried Bontragers in recent years so they might be good now for all I know.

itslightoutandawaywego (Apr 16, 2021 at 16:19)
Looks like a Gambler.
Below threshold threads are hidden