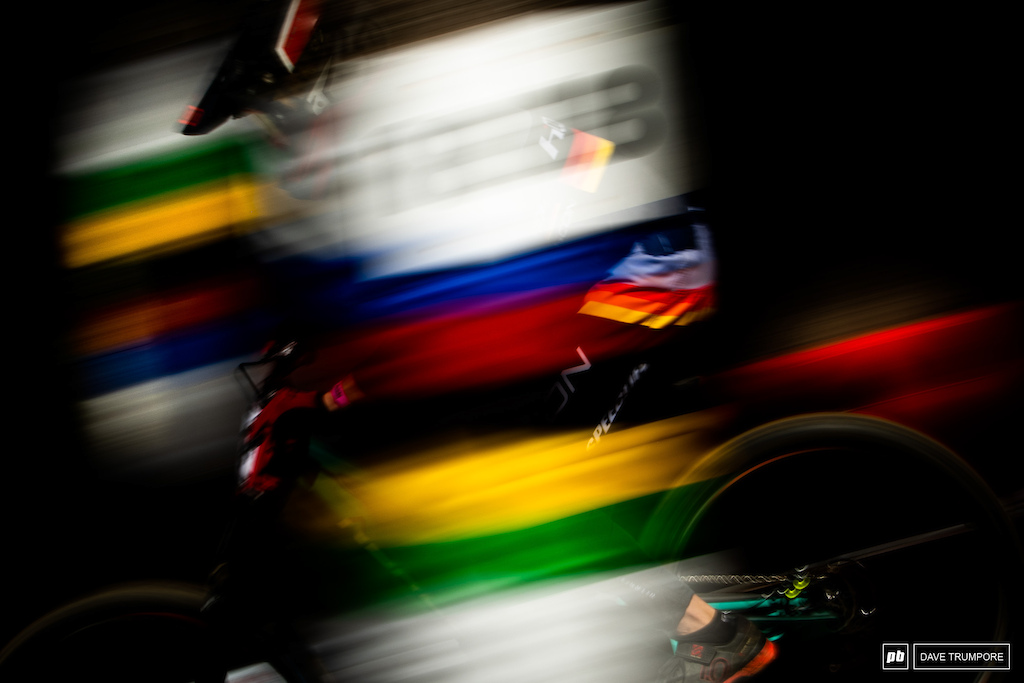 Everyone is chasing the rainbow stripes this weekend, but only one rider in each category will get the honour to wear them for the next twelve months. Predicting the winners for World Championships always seems more difficult than made predictions for a regular World Cup. On the one hand, we've seen riders like Kate Courtney, Danny Hart, and Camille Balanche come out on top and take the rainbow jersey for their country before ever having won a World Cup, while on the other hand, there are riders like Loic Bruni, Pauline Ferrand Prevot, and Nino Schurter that always seem to find an extra gear in the race for the rainbow jersey. It's one day and you have to be willing to put it all on the line.

You can get an idea of who is going fast from Qualifying results and from the Short Track / XCC results. Christopher Blevins and Sina Frei took the first-ever rainbow jerseys awarded in Short Track, without ever having won the discipline at a World Cup. This year's top qualifiers on the Black Snake, Vali Höll and Loris Vergier, were the top qualifiers in last year's World Championships race as well, and while both have won the prestigious race in the Junior category, neither have won the rainbow jersey in the elite category.

With a World Championships win, there's a chance to turn a disappointing season around. You can see our predictions for the downhill race here, but we've been wrong before. Who do you think will make it into the history books in Val di Sole?

Who will win the elite men's 2021 DH World Championships?


Who will win the elite women's 2021 DH World Championships?

Who will win the elite women's 2021 XC World Championships?


Who will win the elite men's 2021 XC World Championships?

Would you rather win the World Cup Overall or World Championships?

Would you rather win the World Cup overall or World Championships?

shaun-ridefast-michael (Aug 28, 2021 at 9:03)
@vinay: Give him a wheelchair or one of those little scooters people with a broken leg use and he'll pin it!

leon-forfar (Aug 27, 2021 at 13:49)
Because it's a better representation of your overall skill and consistency. The rainbow stripes jersey is pretty sweet though...

betsie (Aug 27, 2021 at 13:51)
Because it's based on more than 1 race run on 1 day. As a racer, I place the overall series above champs if I am fit and racing for the win. Champs could just be on a track the suits you best, overall is more rounded.

Jamminator (Aug 27, 2021 at 20:01)
Because if you've won world cup overall, chances are you've been on the podium multiple times throughout the season. I'm sure some people would rather prove they can be a dominant force over a season than have one good day.

pbuser30972 (Aug 27, 2021 at 23:51)
Lots of people have won World champs almost as a one off lucky race. World Cup overall shows you're an all round consistent fast racer and truly one of the best of the best. If it rains halfway through the runs at world champs, or like a couple of times the person who's been smashing everyone else's times all weeks has a silly crash in their final run and it's anyone's. It's like Rob Warners one world Cup win, he was never one of the best (could have been but never really tried) yet he could win one race through luck.

lepigpen (Aug 27, 2021 at 12:54)
Putting one in for Tahnee even though she's basically injured and it's not her type of track really. Would love to see the protected no qualis move pay off for her. Smart competitor. For mens i was a basic bobby and went Loris. Everyone else is sending it and making mistakes. Loris might be the most on point rider top to bottom, and could be so for years to come

powderhoundbrr (Aug 27, 2021 at 15:14)
I just pick Nino sine he is the only XC rider I know and that is just because he is mentioned often on the podcast.

nurseben (Aug 27, 2021 at 13:23)
So, firstly, I don’t know most if those names, secondly, I think my mom should win cuz she works hard and she had to put up with me growing up, thirdly, ever since outside bought Pinkbike the polls have been super lame.

So outside people, listen up, mountain bikers don’t get SL that serious about shite like done other sports fans (football, basketball, baseball, etc..) because we actually participate in the sport, so if ya wanna kept he regulars interested, maybe spice things up a little, be silly, be crude, take chances.

Pinkbike readers are not the same folks who watch the Masters.