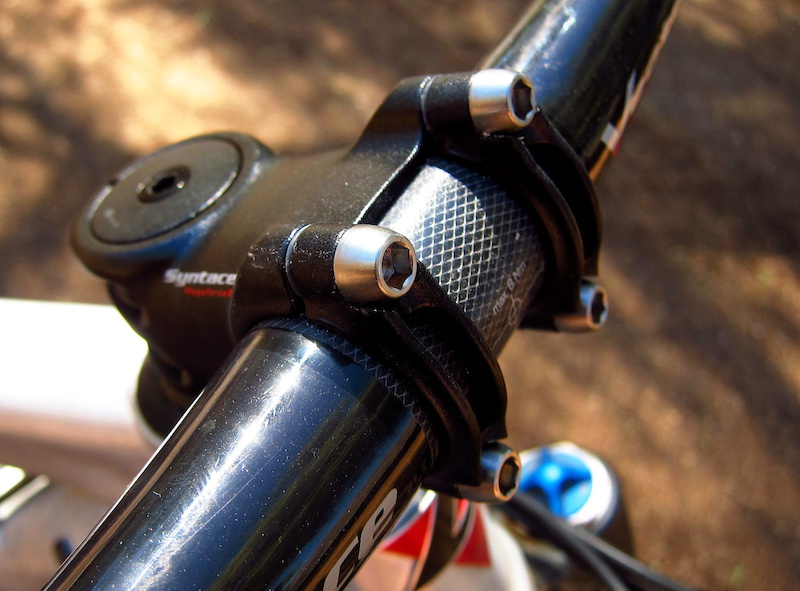 Card carrying members of the BMTS Club who traditionally demand the shortest possible stems, usually have to choose between heavier freestyle designs, which are basically rectangular blocks of aluminum with two holes bored through them, or risk one of the anorexic-looking CNC-machined offerings that are carved so thin that they seem to defy the laws of physics. Choices become much harder to come by if you also want it to be both lightweight and proven for its strength and durability. 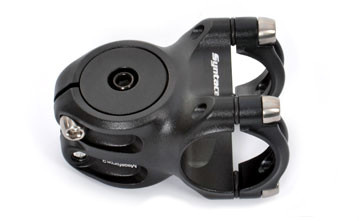 Syntace’s Megaforce 2 stem offers the complete package. Megaforce 2 stems are 3-D forged into their final shape for toughness and material consistency, engineered to reduce stress on the handlebar and steerer tube and, beginning at 30-millimeters and only 107 grams, they are among the lightest available in the all-mountain/gravity categories. Megaforce 2 stems are rigorously tested in Syntace’s laboratory and also have a long and successful history among the brand’s hard-core fans who rank among the sport’s best bike handlers. They have no weight or use restrictions, are checked out for aluminum or carbon handlebars up to 800 millimeters wide, and come with a ten-year warranty for manufacturing and material defects. 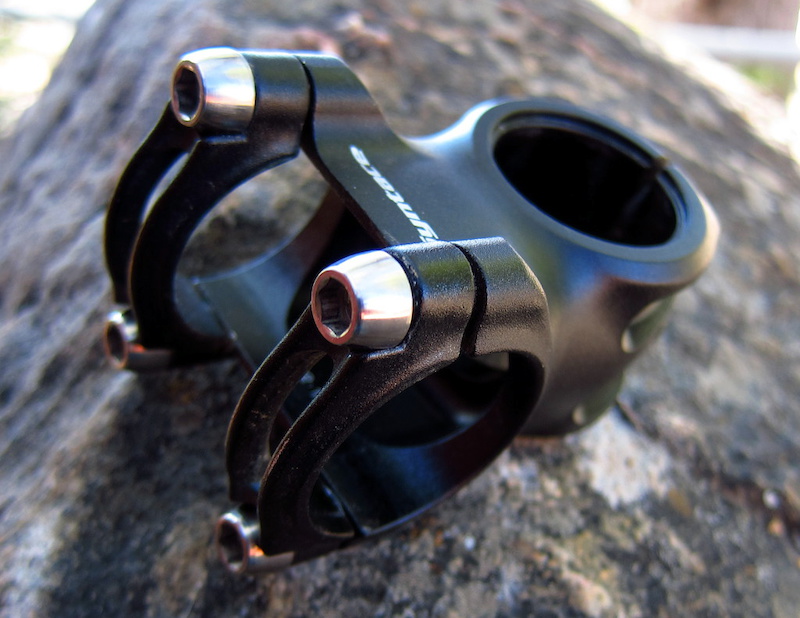 Three-D forging squeezes the stem's aluminum parts into their final shapes, which causes the metal to flow around high stress areas. That, and a final shot peening process, makes Megaforce 2 stems strong and resistant to fatigue. The 40-millimeter stem is pictured here.

Syntace was one of the pioneer stem makers who designed the body side of the handlebar clamp to extend beyond the centerline of the bar, so much of the torsion generated by the rider is directed into the stronger stem body, and less into the thin pair of arches that form the Megaforce 2’s handlebar clamps. The hollow stem is profiled in a rectangular shape which is significantly wider than it is tall to add further stiffness, while minimizing stack height. Megaforce 2 stems fit 31.8-millimeter bars. The hardware is titanium and the steerer clamp is available in 1 1/8 inch (28.6mm) diameter only. All stems are 6-degree angled and reversible, while lengths start as short as 30 millimeters and continue in ten-millimeter increments to 80 millimeters. Weights begin at 107 grams and run to 145 grams for the 80mm length. MSRP is $99 USD and your color choice is black.
Syntace Germany
Syntace products in the USA

The body side of the Megaforce 2 stem (left) extends a few millimeters beyond the handlebar's centerline to take some stress away from the clamping bands. Asymmetrical bolts are reportedly more effective at evenly distributing the steerer clamping forces. A look inside the stem reveals just how close the handlebar comes to the forks steerer - about five millimeters for this 40-millimeter stem.

tbubier (Oct 30, 2014 at 10:22)
Can't we find something better to review then a stem? My requirements for a stem are a. holds bar b. doesn't kill me c. right length. What more could you possibly say about a stem?

RLEnglish (Oct 30, 2014 at 18:09)
Someone has to give Pinkbike money for advertising. Trek can't be the only paid for review/advertiser.

NickBit (Nov 1, 2014 at 1:50)
I've never seen a Syntace add on Pinkbike. Yea it's just a stem but it doesn't mean you have to accuse the editors of cash for comment. Come up with some proof and start #PinkBikeGate or go home.

seraph (Oct 30, 2014 at 0:20)
Agree. Often overlooked. But their bars are largely overpriced compared to other companies' offerings.

Wanted to get my hands on one for a while. Now using a 75mm F149 with a Vector 7075 High 20 in its intended width. And the bars are excellent indeed, especially in 12 degree sweep. In aluminium they're fairly priced, carbon is a tad pricy perhaps.

seraph (Oct 30, 2014 at 9:53)
Ah, I don't mess around with alloy bars most of the time. I had run the Vector carbon bars before and they are worth the money in my opinion. But they might seem overpriced to some people.

I have the Megaforce 2 40mm stem on my Trek Ticket Slope, with black ti bolts replacing the standard raw ones: www.pinkbike.com/photo/11115487

Cumulonimbus (Oct 30, 2014 at 11:11)
I agree, not overpriced in my opinion, but I'll stick to alloy for a while. Although durability wise that shouldn't matter, they aced a recent test in the German Bike magazine.

WhipChop (Oct 30, 2014 at 5:51)
Just bought one of these in 40mm for my Kona Process. Impressive weight and stiffness. Replaced a 50mm Thomson. Never thought I'd never run a Thomson on one of my bikes but I'm a Syntace convert now.

kickstand1 (Nov 1, 2014 at 9:39)
am I missing an intended double negative that would make this comment make sense?

Anyway, the stem is thebomb.com

Ulysees (Oct 30, 2014 at 5:02)
Any decimal rounded-down under .49 is applied mathmatics. Or - numbers. Go measure every other stem you see then and report back which ones have to be avoided.

syntace is proportionately cheaper in the US because the brand is less well known and they cannot command sell through at the higher price that they can in their home market.

Narro2 (Oct 31, 2014 at 12:49)
I agree....although i am pretty sure the average mtbers in europe have a fairly similar incomes regardless of where they live. It is an expensive sport at the end of the day... a certain amount of income is required or.....full sponsorship

dchill (Oct 30, 2014 at 8:33)
I guess PB is sponsored by Thompson. All posts in regards to them not being the wonderful stem as some people believe have been defeated.

andrewbikeguide (Oct 30, 2014 at 8:44)
Plus they want Euro 199 for their 35mm stem and they have no insurance for sales in North America. If you shop around you can get three Syntace MF2 stems for that money and pick and choose what stem length feels best. Plus they are stealth and bomber, ran one on my Blur TRc for three years. Great stems.

ryan83 (Oct 30, 2014 at 11:16)
Can anyone please explain why, other than supply/demand/market trends, it costs more to make a smaller stem? It seems like any decent stem under 60mm costs about $100. Does it require a different manufacturing process to make a short stem? I would think that it would be easier for a short stem to be stiff than a longer stem (that's what she said).

jclnv (Oct 29, 2014 at 22:45)
I'd rather have the R&D in the lightest/strongest design than a choice of delightful anodised colours.

deeeight (Oct 30, 2014 at 0:28)
That'd drive the cost up, there are aluminum alloys far stronger (and costlier) than the ones used in bicycle components now.

identiti124 (Oct 30, 2014 at 6:26)
I agree that the strength and weight of the design are of paramount importance and that R&D is the only way to achieve the best results, but I still think a range of colours would help boost sales. It would make good market sense and at the end of the day result in more sales and therefore more profit that can be used to fund more advanced R&D and manufacturing processes leading to a stronger, lighter product in the long run. Deeeight is correct though, there are more advanced materials and manufacturing processes than those used in the bike industry and if you want a product with the highest possible strength to weight ratio it gonna be extremely expensive and impractical to produce.

The full movie is on youtube also... its very 80s cheesy for a wide-release mainstream movie.

millermotto (Oct 31, 2014 at 7:02)
MEGAFORCE! I had totally forgotten that movie. Is there a better one. It would have to be pretty RAD

www.youtube.com/watch?v=1OL-0uAQVsw&list=PLB8E8BB38DCFCB5EB
Below threshold threads are hidden

shredjekyll (Oct 29, 2014 at 21:26)
Impressive product but I personally prefer some heft on my stems. One of the components I like to pick up and think "yep, I have absolutely no chance of breaking this".

It doesn't hurt that being willing to wield a "heavy" stem will leave your wallet a bit weightier.

shredjekyll (Oct 29, 2014 at 21:49) (Below Threshold)
I get that, it's a sick stem from a highly experienced company and it's been through all sorts of rigorous tests. I would still prefer if it were lets say 150g for the 40mm version. Just preference, I think there is a point where stems are both too short/long and too heavy/light for MTB applications.

LTCrozier (Oct 29, 2014 at 22:13) (Below Threshold)
I have to agree with shredjekyll. I like Syntace don't get me wrong, the quality is superb but I liked Easton stems too until my friend snapped to two light weight pieces of face plate when he pushed down on the bars. He is no downhiller nor is he a freerider, but he is an endurance,xc and general mountain biker. For me Thomson is the best. Looks great, feels reliable, have a 40mm option coming soon and come on it is a few grams and I am no pro.

blackthorne (Oct 30, 2014 at 0:25)
So you pass judgement on Syntace using your friend's unrelated experience with a different brand. heneralize much?

WAKIdesigns (Oct 30, 2014 at 1:46)
Truvativ XR for pennies was 3D forged as well. Megaforce 2 is light because it is short and has ti bolts... Also the shorter the stem the less strong it needs to be as there is less leverage acting on it. Thomson Elite 50mm is one chunk of beef - with regular bolts it comes at 200grams of alymiNUM. Weight is not telling all the truth about strength.

freeriderayward (Oct 30, 2014 at 1:56)
Yeah if it's short, it means there is less spanning and leverage strain on the stem. So they don't need to make it as built up as a longer stem.

dchill (Oct 30, 2014 at 3:46)
I have seen several cracked Thompson stems but never a cracked Syntace

honourablegeorge (Oct 30, 2014 at 3:53)
If you genuinely think Thomson are the best, you should be aware that they consider their faceplates a consumable to be regularly replaced. They break regularly

Despite the wealthy circles I am in, liking prestigeous toys, I see very few Thomson Stems, let alone cracked ones hahaha

WAKIdesigns (Oct 30, 2014 at 4:46)
CRChris, I truly feel you man, a simple 4 by 2 bolt design, meaty and virtually indestructible, putting less than 100g to regular design lik Truvativ AKA, which in perspective of a complete bike is nothing. But I am damaged by working in design industry...

, I use one as it was cheap and for sure it will last long and bet I can't break it. Anyhow never have seen a broken stem. A hussefelt just do it job, is the stem that could come from soviet Russia, simple, sturdy and works... It just works

rideorange525 (Oct 30, 2014 at 6:06)
I've seen Thompsons crack even torqued to their spec's. One I had would let the bars slip/spin whne landing a jump with bolts tightened to Spec. Great for XC, won't ride one for aggressive riding again...

shredjekyll (Oct 30, 2014 at 14:25)
Or unevenly tightened the bolts. Eastons top-lock system is a joy to work with since it is so straight forward

shredjekyll (Oct 29, 2014 at 21:55)
I'm not sure I agree with you on that, cretin82. Clearly some people care because we see it all the time. What it really means is they're all mega douches.