Join Pinkbike  Login
The dust is starting to settle on the first big event of the year in Rotorua, New Zealand. It's a chance for riders to put their new bikes and components to the test, and to see if that off-season preparation paid off.

Here's a collection of what we saw while roaming around over the last week in Rotorua. There's a little tech and gear with a lot more random. 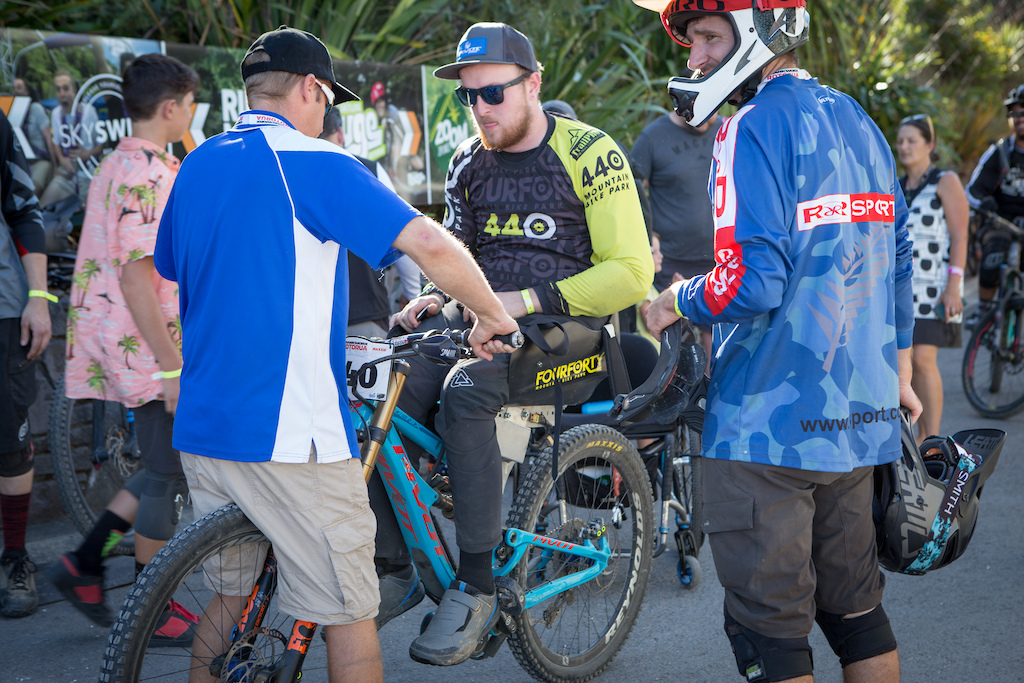 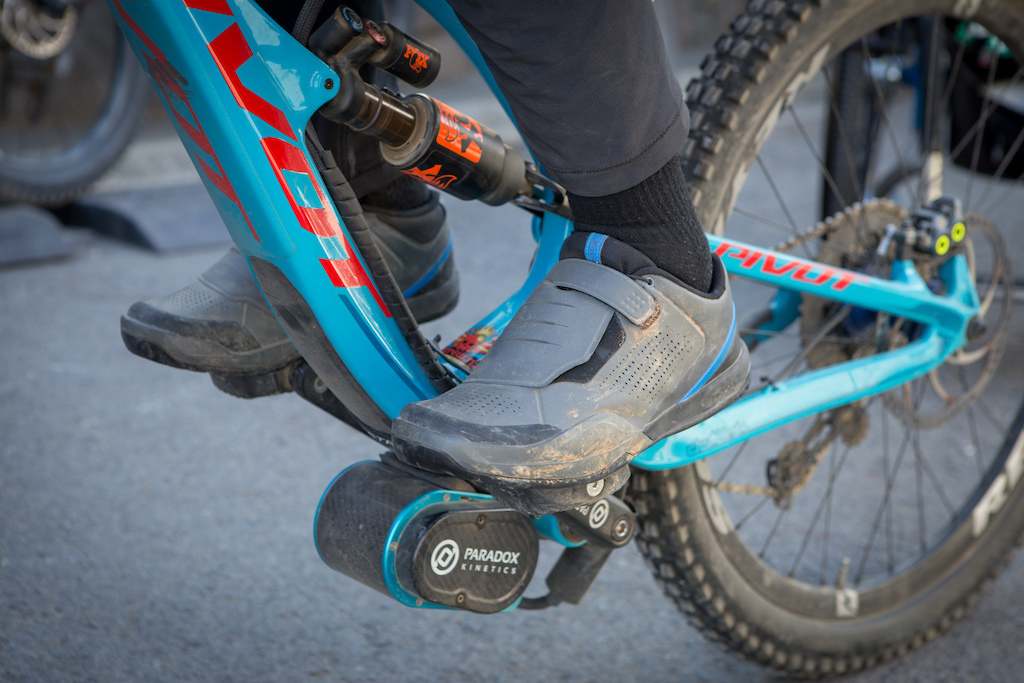 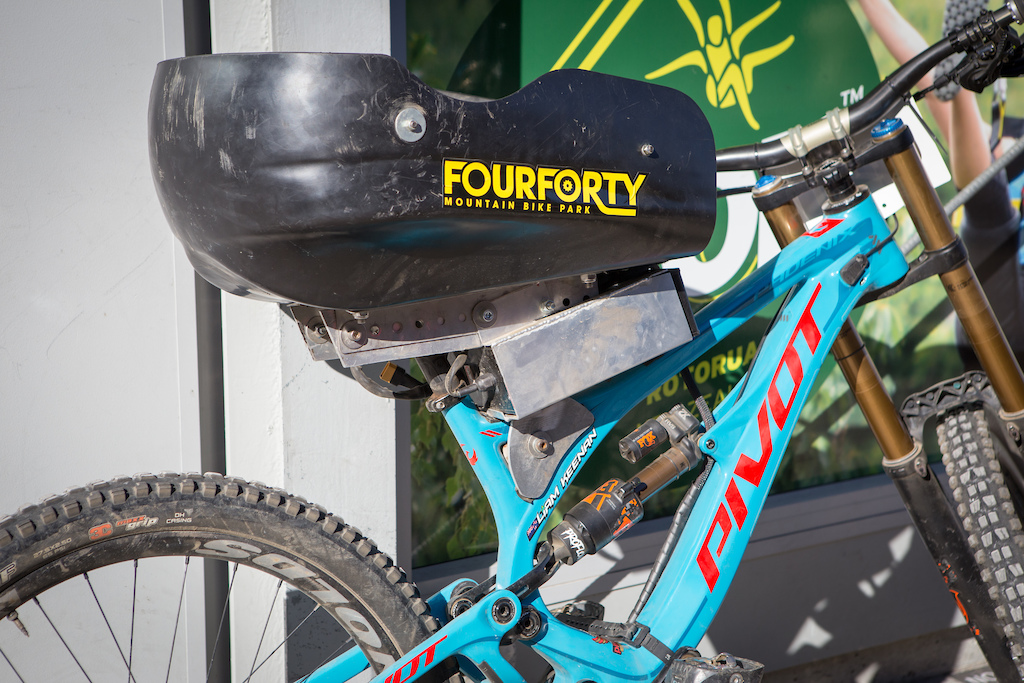 Liam Keenan had a crash two years ago that changed his life forever, leaving him a paraplegic, paralyzed from the chest down. Keenan didn't let that stop him. He competed in the DH events on his his highly modified Pivot Phoenix. With the help of his friends strapping him in and getting him going, he took a coast into the start of the Air DH, tripping the sensor and starting the clock. Hands down the most inspiring thing I witnessed all week. No excuses here. 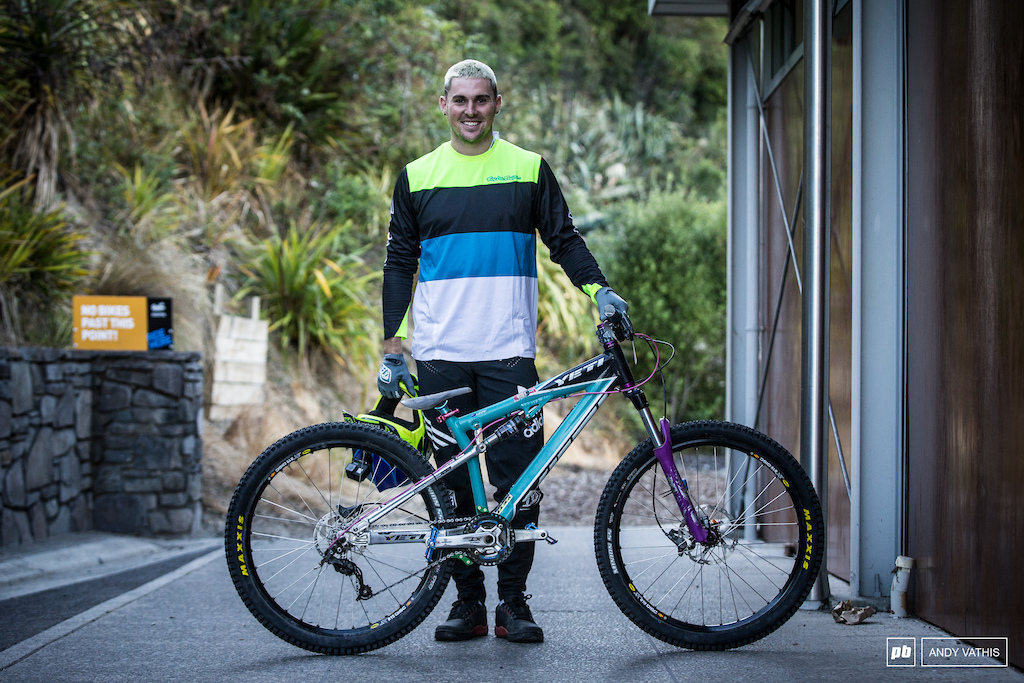 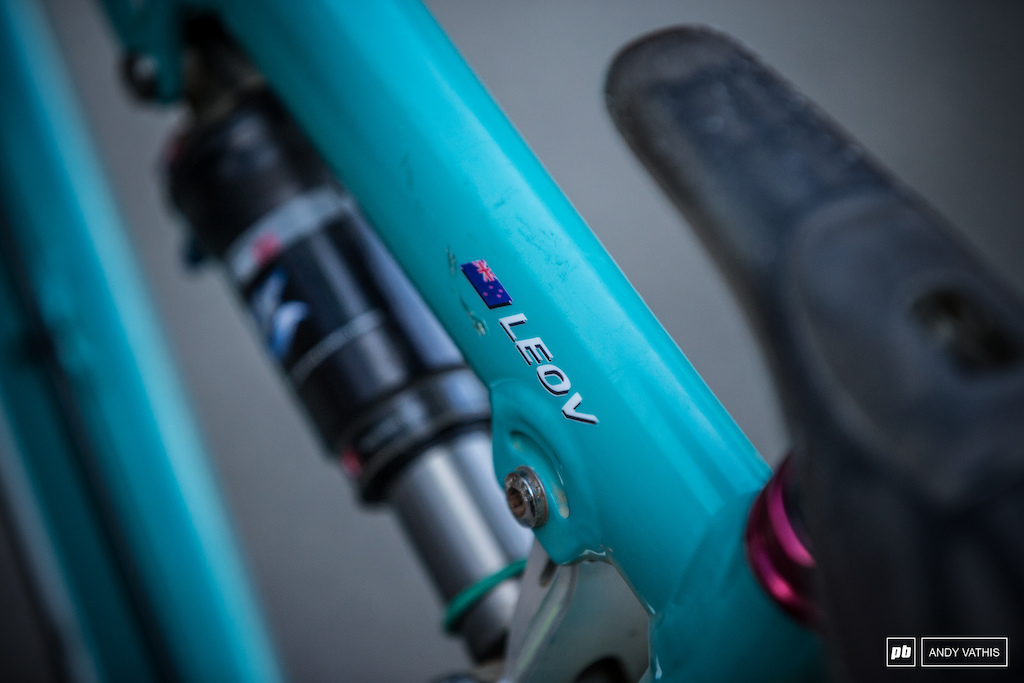 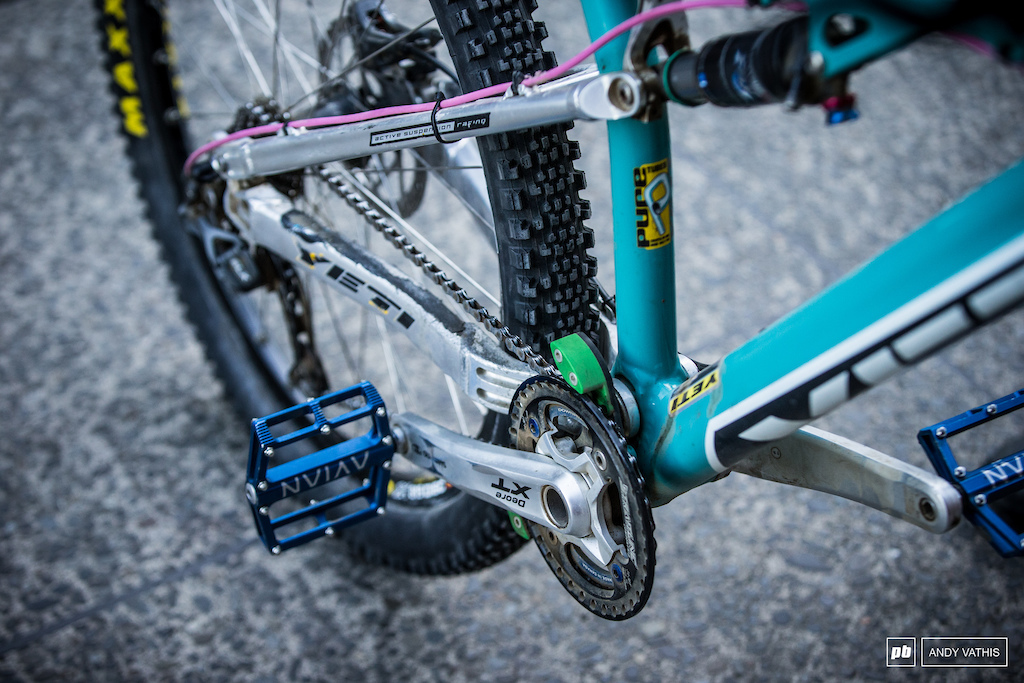 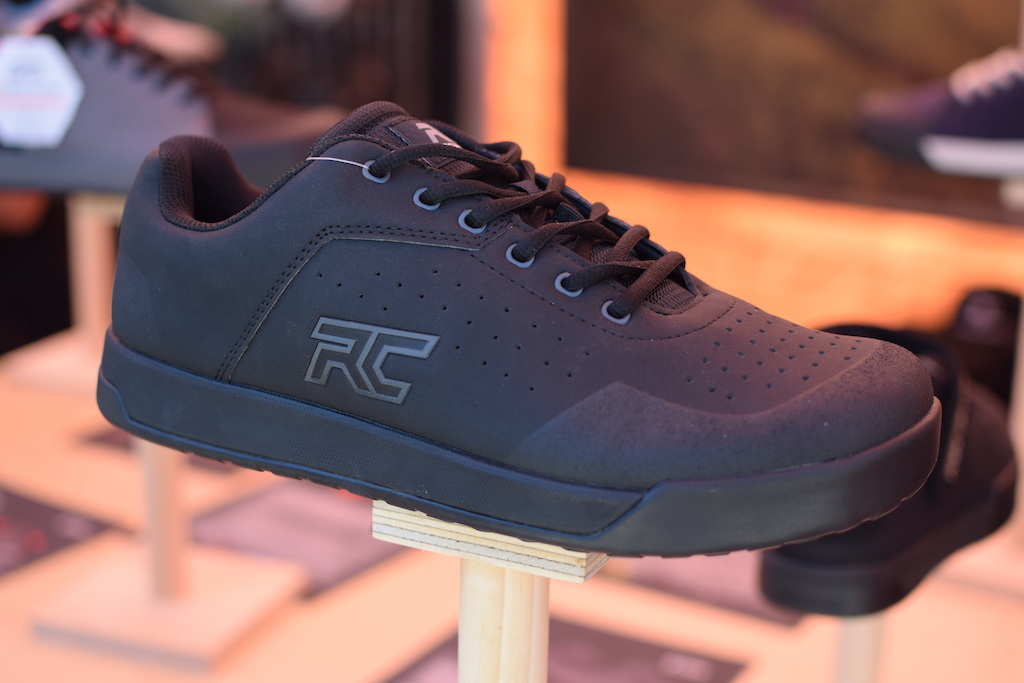 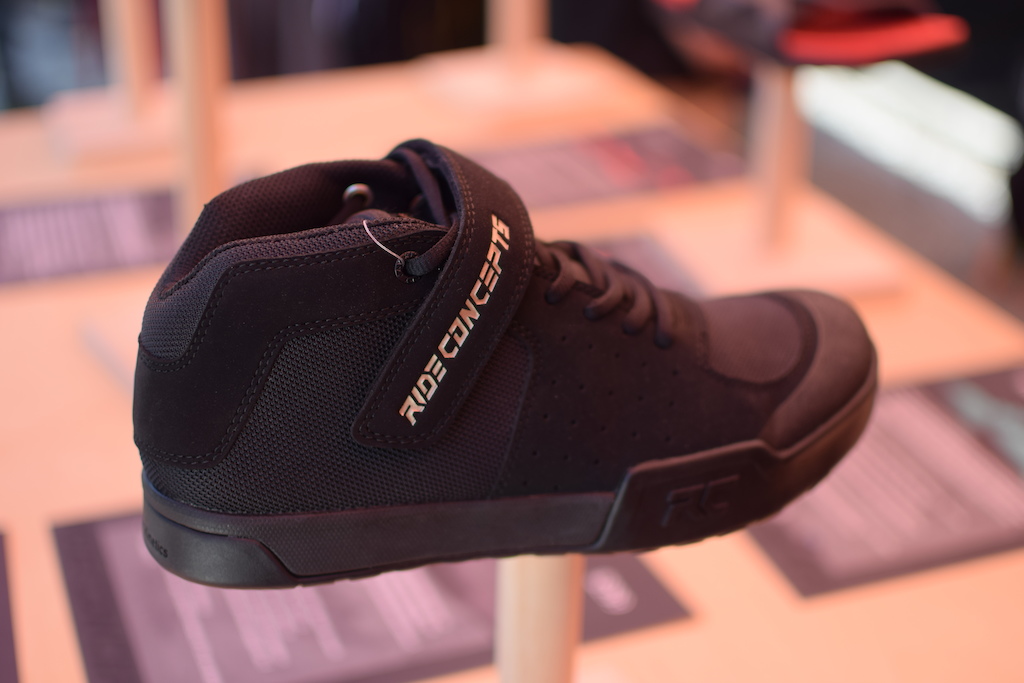 Ride Concepts had samples of their shoes out on display. 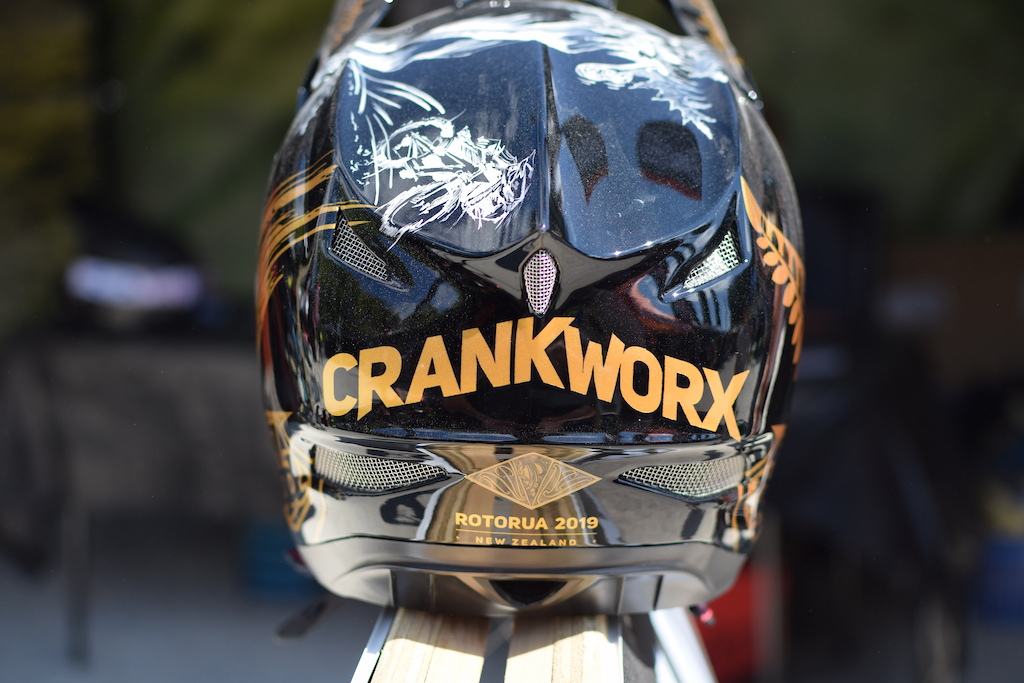 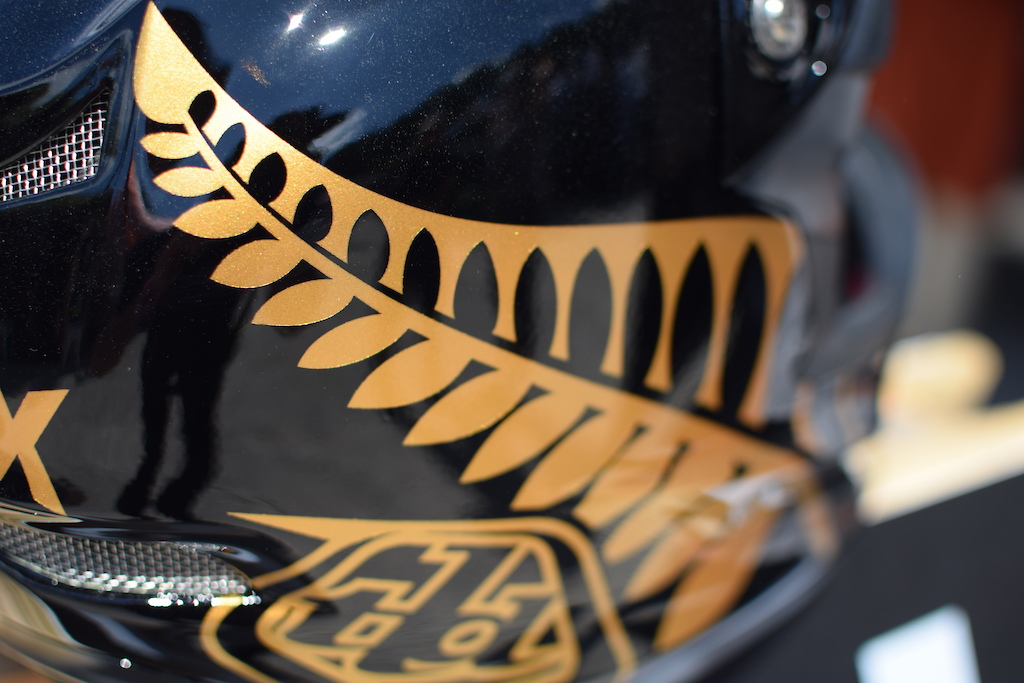 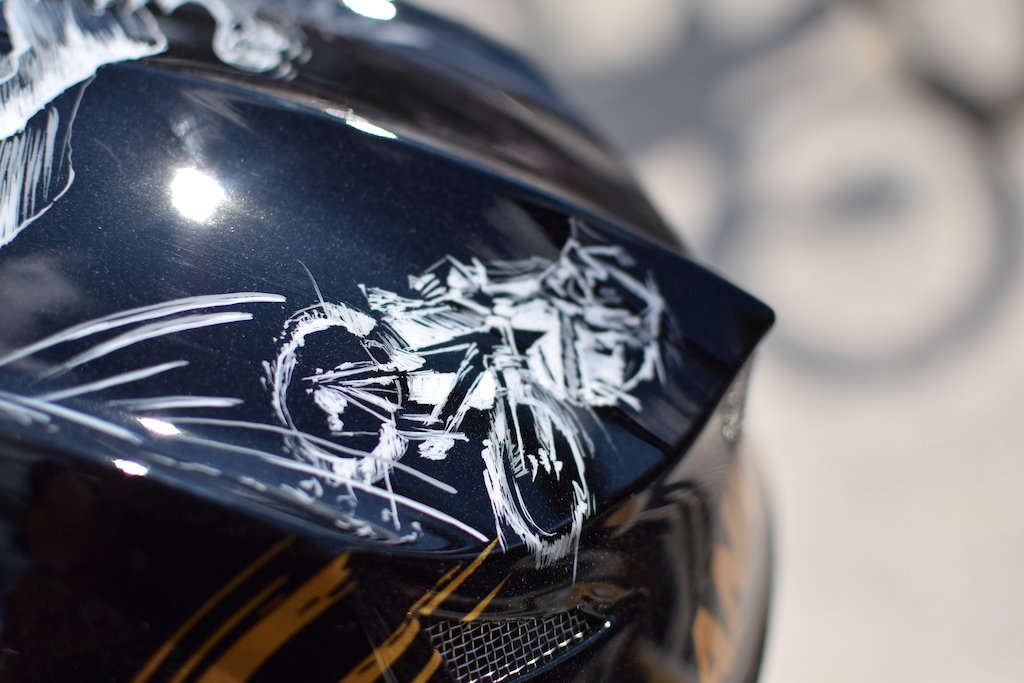 TLD were painting helmets, and this one was going to go home with one lucky winner. 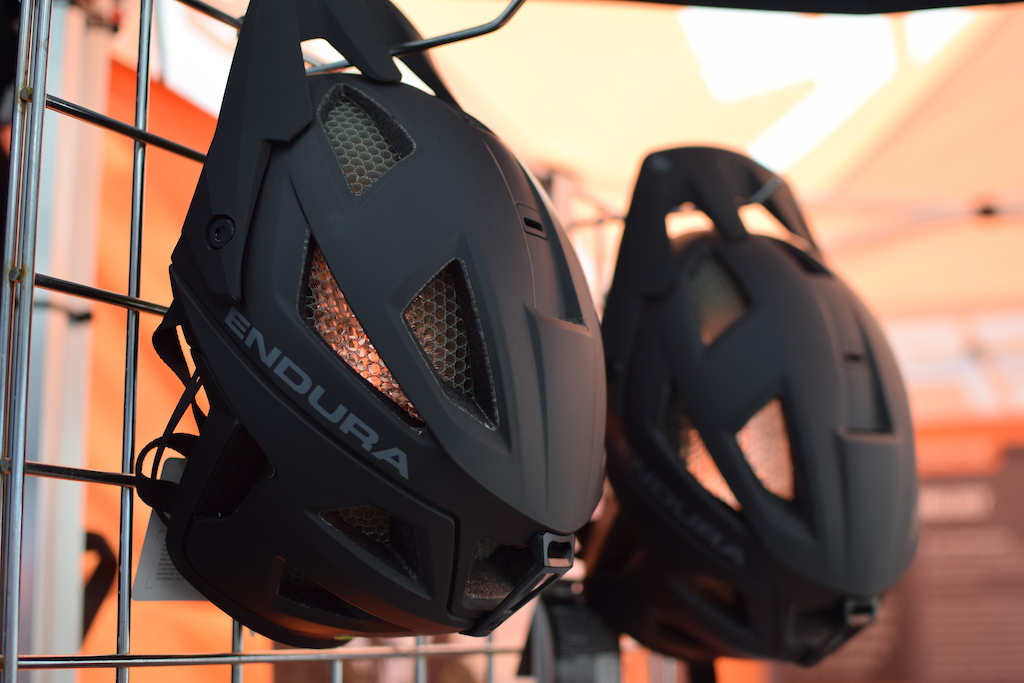 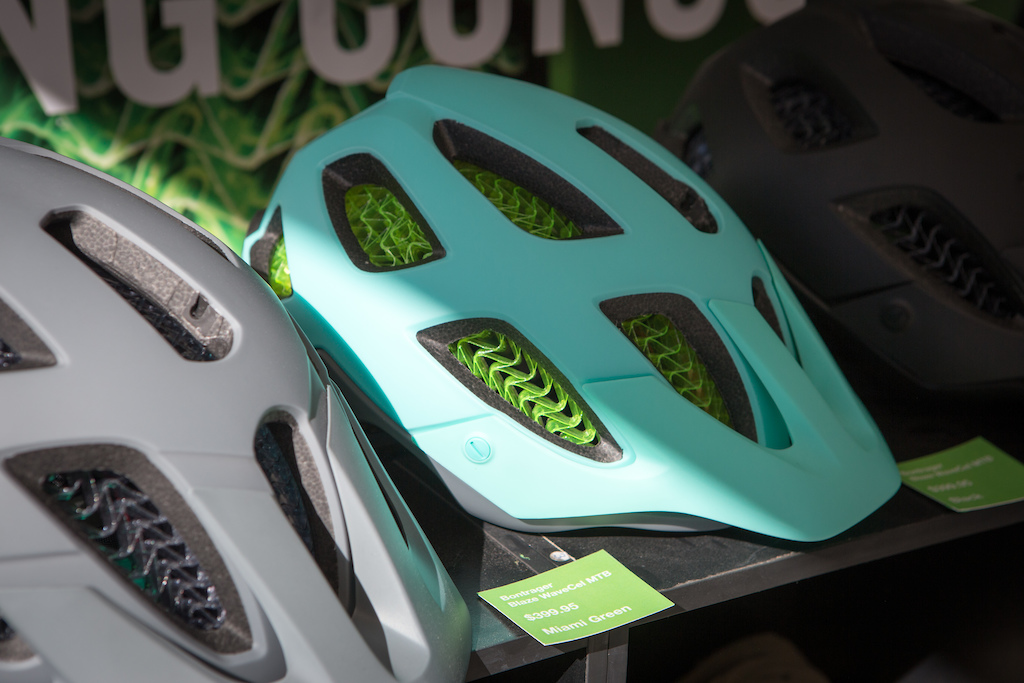 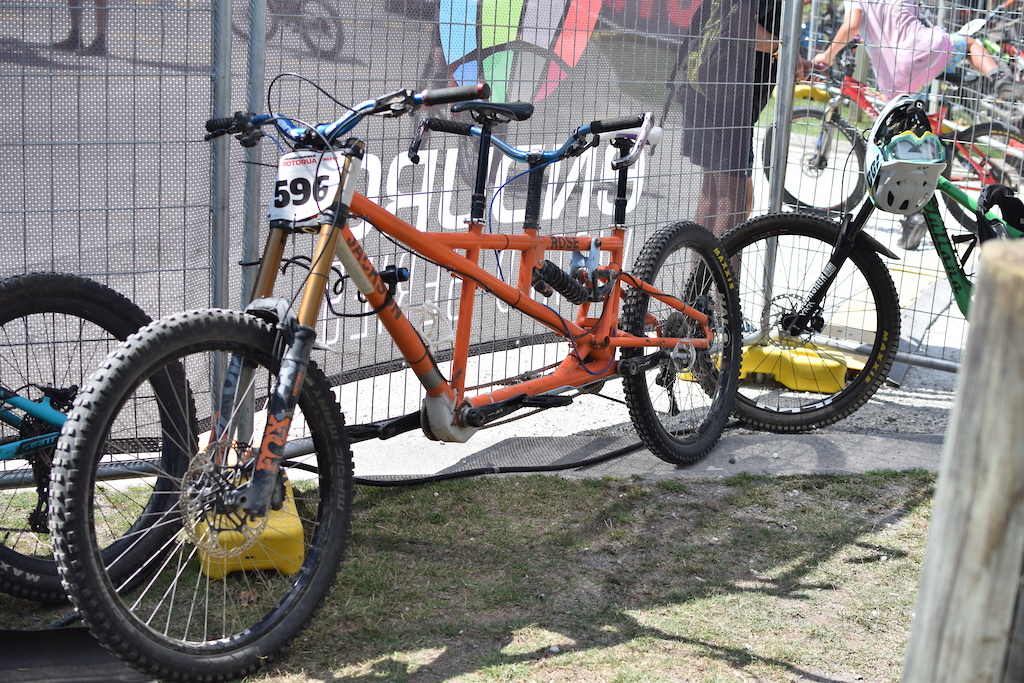 This tandem was raced and sent off of some jumps by two crazed pilots riders. 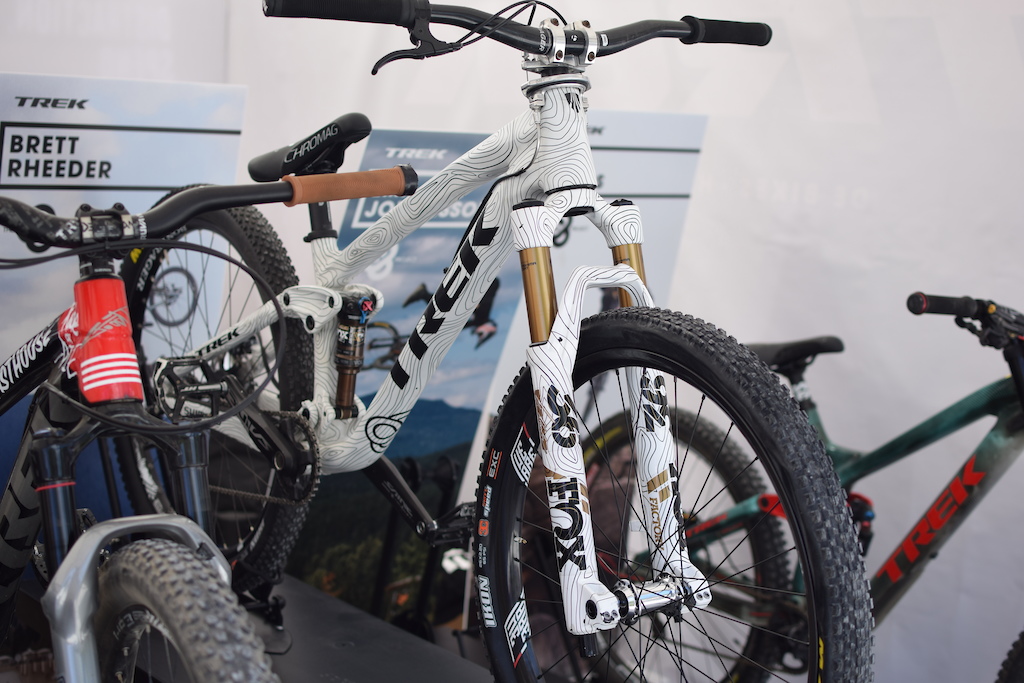 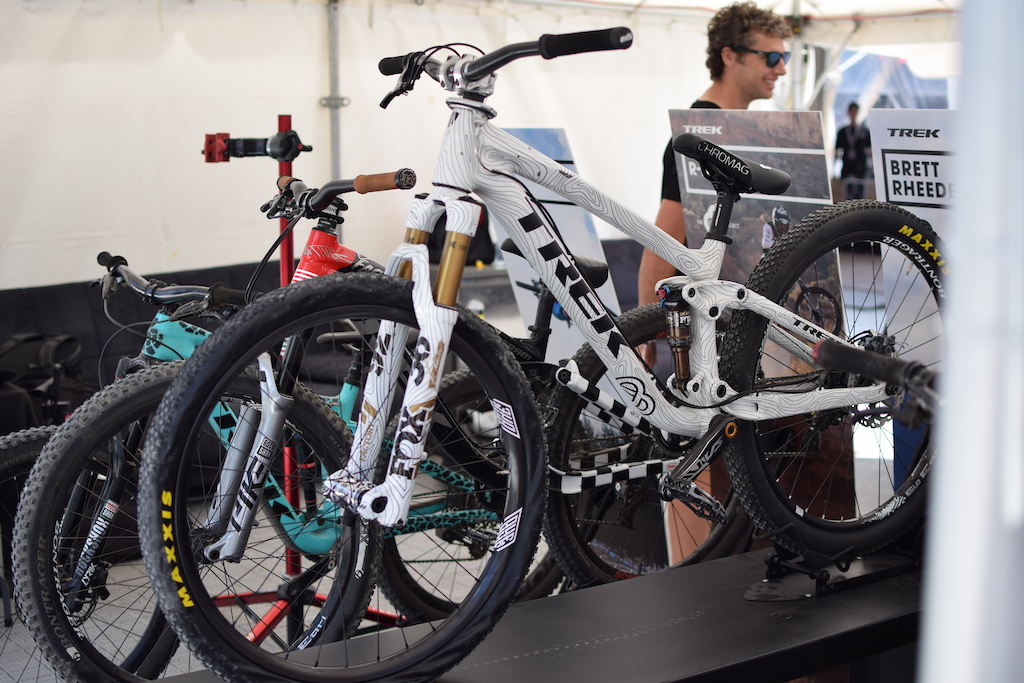 Trek had all of their athletes' custom painted frames posted up in their booth. Always some of the best looking paint jobs. 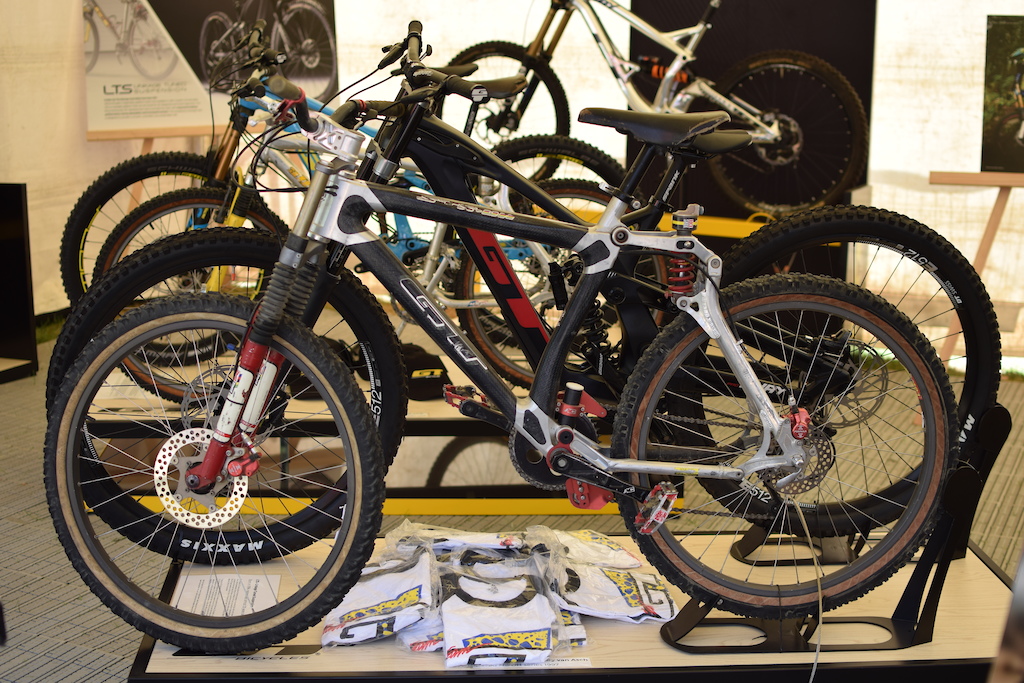 Mmm, thermoplastic. Can anyone name this GT and what year it was produced? 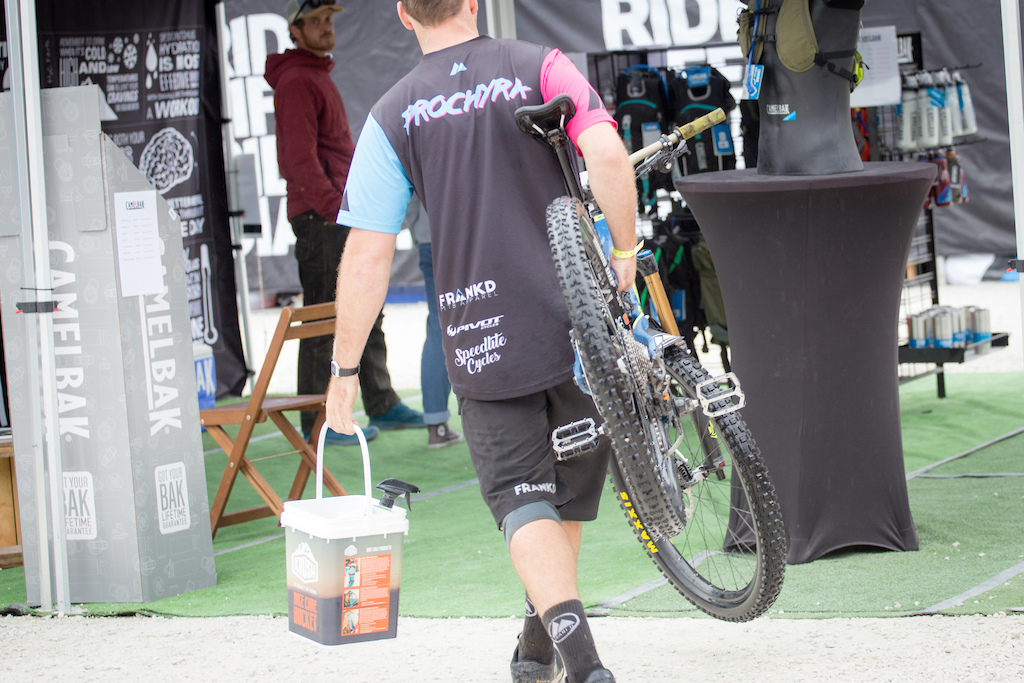 With strict biosecurity measures in place in both New Zealand and Tasmania, everyone traveling to the next round of the EWS was washing bikes and then carrying them to the pits to be packed. Clean bikes help avoid delays.

aljoburr Plus (Mar 25, 2019 at 16:41)
@h82crash: Yes, just what i would have said, but you got their first, good too see this frame out lived GT, Yes the name lives on, but the company died with this thermoplastic frame?

G-A-R-Y (Mar 26, 2019 at 3:03)
Defo GT STS DH (possibly 98 )
I had the 97 one.
Same AC cranks/chain device and Azonic kit
but they didn't come with Boxxers or discs. they came with a rockshox DHO (4" travel) and XTR V-Brakes.
The 97 frame didn't even have disc mounts, it needed an aftermarket bolt on adapter to fit them.
Frame above looks like it has disc mounts and no canti bosses on the seatstays.

zutroy (Mar 26, 2019 at 8:40)
@aljoburr: No, the Lobo moved the upper linkage down to the middle of the seat tube and moved to a pull shock from the push shock. It was a step up in design from the original LTS setup.

MarkyB (Mar 26, 2019 at 21:13)
What ever happened to IRC tyres? they were amazing in the 90's, everyone was riding them, way ahead of the times in so many respects (great aggressive tread, wider than most others, foam lined sidewalls to reduce pinch flats) but then they just disappeared!

pinnityafairy (Mar 26, 2019 at 8:25)
@RedBurn: every time there's a vintage bike at our Trailhead it always draws more attention than a state-of-the-art $14,000 carbon dream machine. Nothing like picking a used bike up off Craigslist for a few hundred bucks and it shines brighter than the $14,000 glamour rig. Been the icing on the cake is if you can actually go out and ride it and pass that modern-day overpriced Taiwanese thing.

WAKIdesigns (Mar 26, 2019 at 10:24)
This dude is called Michael Bias and he is an absolute beast.
www.instagram.com/p/BuRyZL1lpJZ/?utm_source=ig_share_sheet&igshid=19k8ec2yz6kdt

timrippeth (Mar 26, 2019 at 19:14)
I love seeing some of the classics still out there smashing trails and racing. We spend too much time focused on the latest tech, design, and materials, and forget where we came from. Would love to see that as a category on race day. 10+ year old bikes.

cb7 (Mar 25, 2019 at 17:17)
They're serious about environmental contamination there. I once had to ship a crane from Canada to Australia. Once it arrived they found a clump of mud under an axle. They made us ship it to another country to be cleaned and repainted and sent back! A bit costly, I must say!

vinay (Mar 26, 2019 at 2:35)
Yeah, it actually is a big deal and it is good they're serious about it. It would even make sense on a same continent (not necessarily Oz) when traveling between sea level and the higher alpine because these are also very different ecosystems. Would be a bitch though, to completely clean your bike after every single Megavalanche practice run before you go all the way up there again.

GlassGuy (Mar 26, 2019 at 5:56)
I flew into NZ with my bike, customs inspected all my stuff and found some dirt on the tires. I had to step aside and wipe my tires clean into a trash bin before repacking and leaving the airport. Not nearly as much work as a crane, but yeah...they're picky.

enduroNZ (Mar 25, 2019 at 19:25)
@Chickenwithshovel: it's where all you guys tried to escape from when you were sent to Aus for being naughty

onemanarmy Plus (Mar 25, 2019 at 16:34)
Some Quadriplegic's have the use of 1 or more of their limbs. It just means that all 4 limbs are effected to a certain percentage. There's a quadriplegic that runs a BMW on the track. Kid was racing super bikes and was a pretty solid DJ rider back in the day. Crashed riding DJ's.

Lankycrank (Mar 25, 2019 at 19:01)
Would be rad if Martin Ashton and Keenan would compete in a race. Keenan's rig looks pretty similar to the bike Martin rode at the Whistler Air DH, right?

Lkeenan22 (Mar 25, 2019 at 23:21)
I'm hoping to get over and race the US open and air dh whistler later on in the year. It's definitely similar to Martyns same concept just different parts. The biggest difference being that he has a 4300watt motor while I have a 1500.

teamdoa (Mar 26, 2019 at 1:48)
Those STS bikes were infamous for snapping between the thermoplastic and alloy lugs, mainly at the headtube of course. Pretty crazy advanced tech though considering when they came out.

Woody25 (Mar 26, 2019 at 8:52)
Seeing the old and new GTs almost overlaid really shows just how much bikes have changed in the last 20 years! I hate how often the standards change in the bike industry, but seeing the bikes back to back like that shows there are some benefits.

laksboy (Mar 26, 2019 at 9:36)
www.pinkbike.com/news/video-this-couple-rides-jumps-teeter-totters-and-drops-on-their-tandem-downhill.html#cid2190060 Or just google Jackson & Rose Tandem. They have lots of vids.

Chridel (Mar 26, 2019 at 4:40)
So many riders in NZ on a new Fox fullface and Pinkbike ignores it. I am missing the days when bike media did report real news instead of waiting on a scheduled release where all bike websites post the same info with more or less the same words.

Chridel (Mar 26, 2019 at 7:44)
@Distelb: Your right, sorry for that particular example. I still think it's annoying to have the same news all over the web. I am missing the time when all Media went to Eurobike and the first day all new products for the upcoming season popped out of the expo.

Liam is paraplegic... Thanks to his Leatt helmet and brace he was wearing at the time that he headbutted a fence post - could have been worse otherwise (i.e. quadraplegic)

Lkeenan22 (Mar 25, 2019 at 23:22)
I'm sitting up pretty high but it works pretty much the same as a standard bike, although being a chest down paraplegic with no core use I can't weight transfer, so I just hold on for the buck!

Lkeenan22 (Mar 25, 2019 at 23:24)
@wpplayer18: quadriplegic means all four limbs are effected, I know some who can walk and have more function than I do as their spinal cord damage was higher up and not as severe.

I'm a t4 paraplegic so I literally stop feeling and use past my nipples, with the exception of my lats as they start above my injury level.

nozes (Mar 25, 2019 at 16:07)
GT STS Thermoplastic. Saw a couple of them snap the headtube clean on late nineties DH races. Wouldn't ride one if someone was paying me!

Radley-Shreddington (Mar 26, 2019 at 3:15)
Everyone who watched GMBN tech last night can tell you the name and year of that GT!

And some heartless douche will still rip the guy for being on an E bike. #getoveritalready