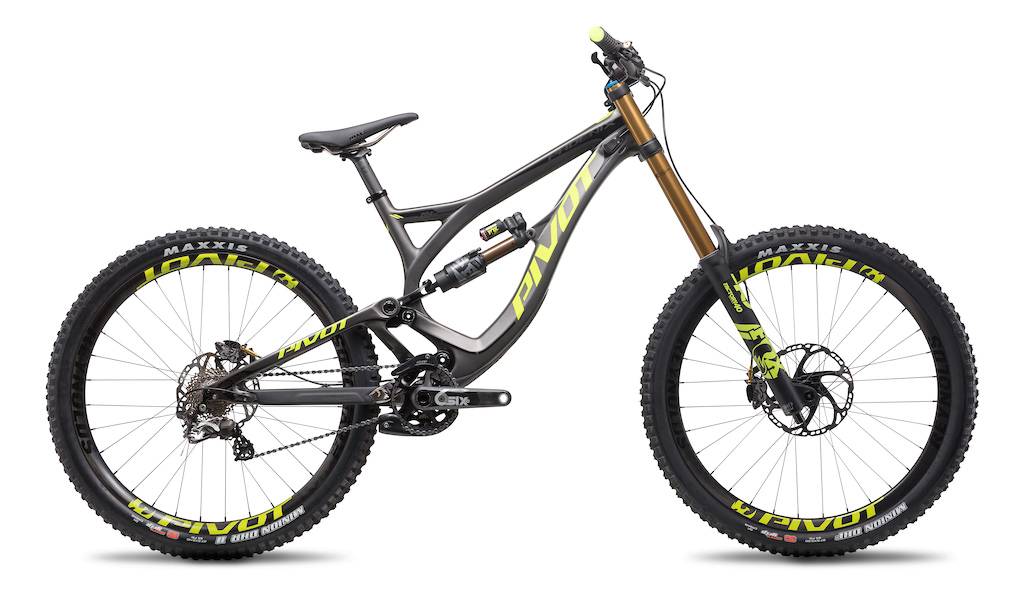 There’s fast and then there’s fast – as in jaw-dropping, berm-railing, rock-garden-blasting fast. For 2018 our Phoenix Carbon continues to set the standard as the world’s lightest, strongest, most advanced and flat-out fastest DH bike available. Consider the facts. In 2017 alone our riders piloted the Phoenix onto the podium at the Red Bull Hardline, Fort William, Leogang and Lenzerheide World Cups, plus Crankworx Innsbruck, Les Gets and Whistler. 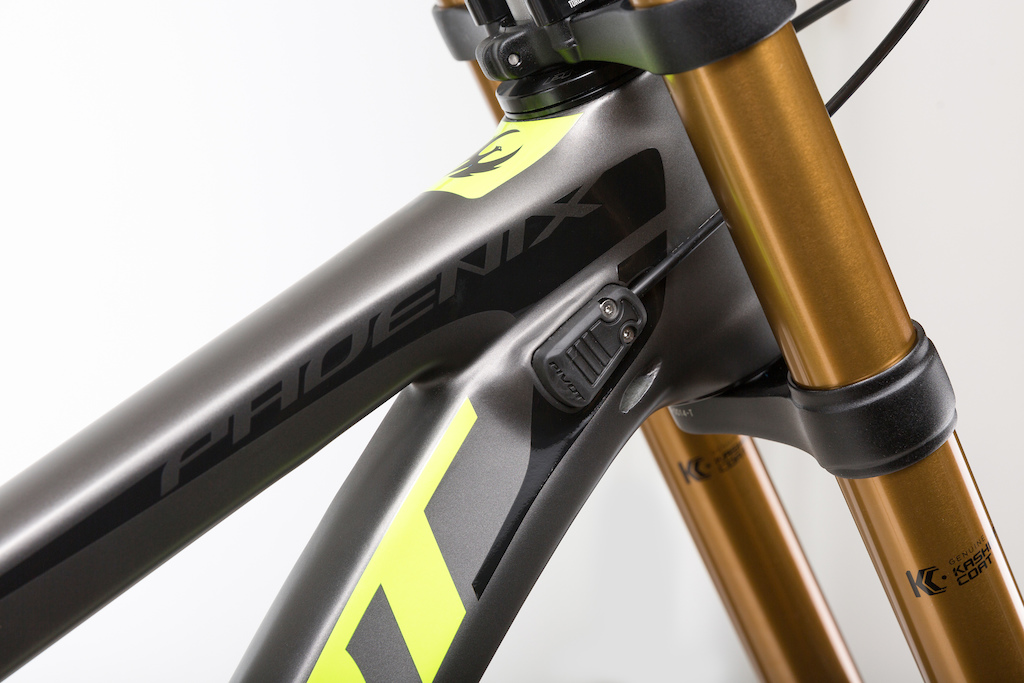 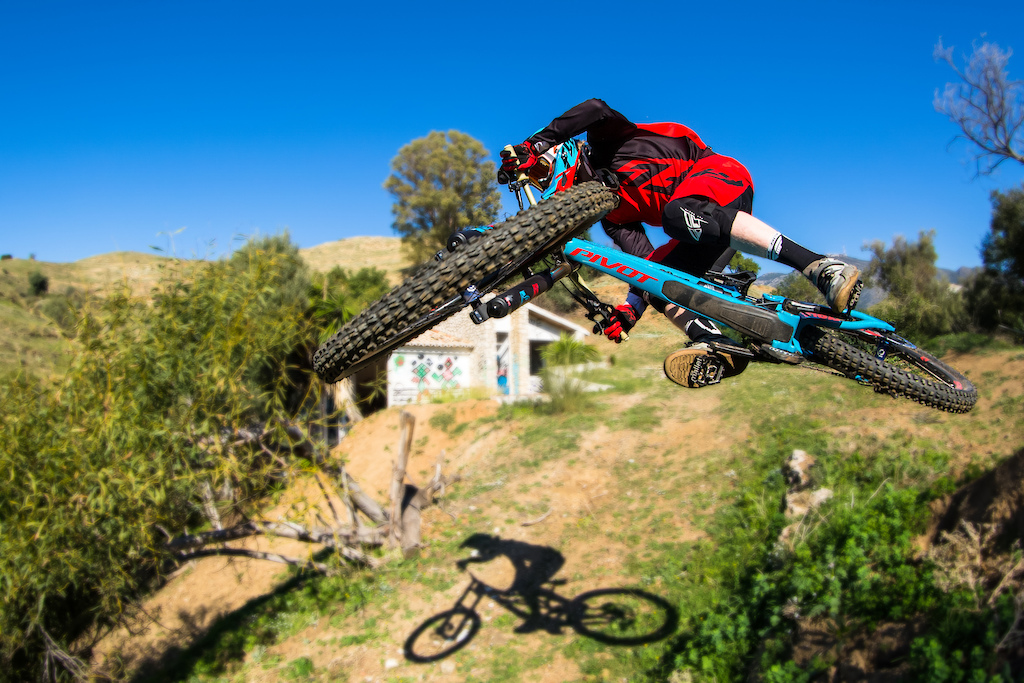 Pivot Factory Racing is poised to do it all over again and they have the perfect weapon…. and so do everyday gravity fiends looking to up their game between the tape, at the park and on the trail. Since it’s a new year, we’re now also offering the Phoenix in new colours – Aqua Blue with red highlights and Sterling Silver with bold yellow accents.

We can’t promise that the new colours make you any faster – fortunately, the bike already has that handled.

A World Cup-proven gravity machine that weighs less than many all-mountain bikes – that, in a nutshell, is the Phoenix Carbon. We spent years perfecting our proprietary Hollow Core carbon moulding process. We use hard internal forms for both layup and moulding – this gives us precise, even compaction of the carbon layers. No voids. No bondo. No compromises.

What you do get is a stronger, lighter frame that takes a true pounding on the world’s toughest tracks – backed by a 10-year warranty. You’re cleared to go big.

The Phoenix was doing the “long, low and slack” thing long before it became a buzz phrase. Here’s what it actually means. Ultra short (440 millimeter) chainstays make the bike easy to whip through corners, while a longer front centre and slack head angle add high-speed stability.

Since every size Phoenix Carbon frame has the same head and seat-tube lengths—you just pick the reach that fits your riding style. If you’re looking for a racecourse missile, run a larger size to get a longer top tube and roomier race stance. Want a shorter, more playful fit for bike park riding? Go down a size for a bike that handles the park with style. 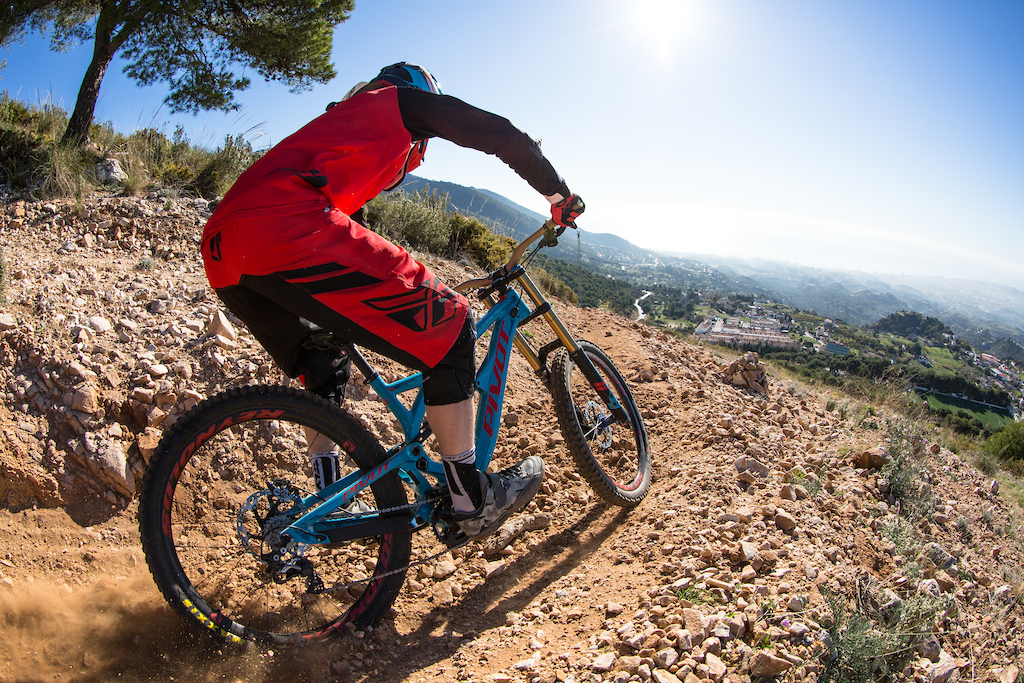 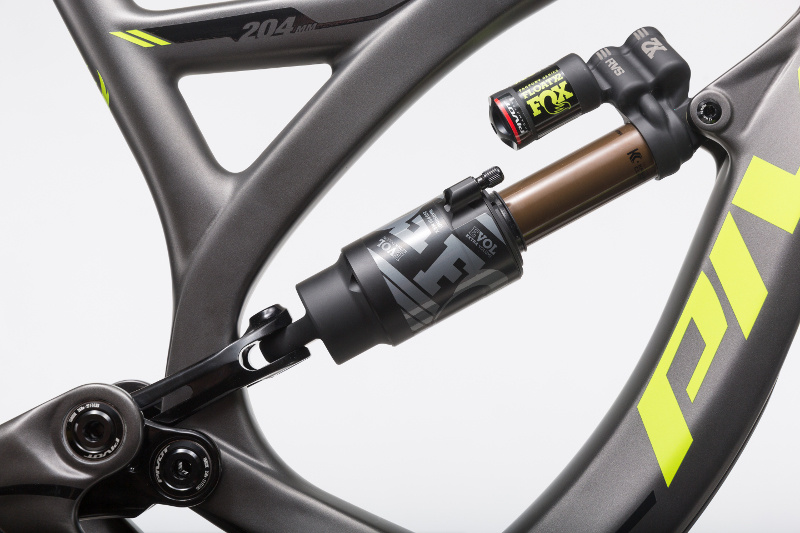 No other DH bike can touch the Phoenix Carbon when it comes to transferring your power into speed. Thanks to Dave Weagle’s dw‐link® the Phoenix Carbon doesn’t squat or bob under pedalling forces; that fact allowed us to lower the Phoenix’s bottom bracket and slacken its head angle. End result? You get absolute control in the most technical sections and precise handling on the fast, wide-open sections of the course. 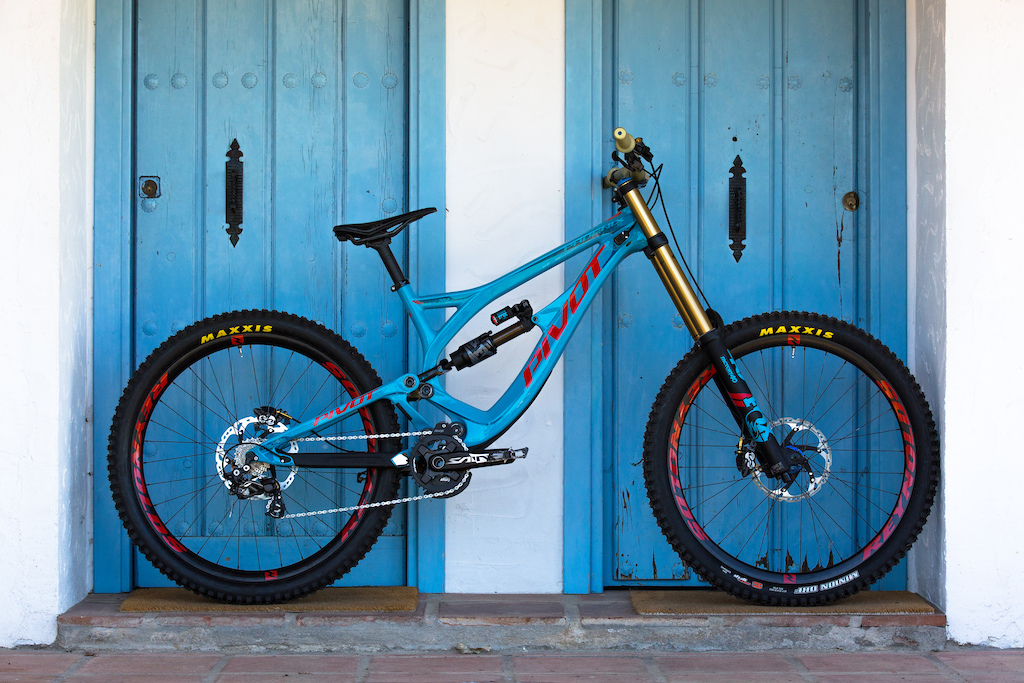 NYShred (Feb 8, 2018 at 6:32) (Below Threshold)
How many of these cracked frames everyone keeps mentioning were Carbon? Oh thats right, every single one of them.

Flowcheckers (Feb 8, 2018 at 7:01) (Below Threshold)
Ever since I saw how easily Minnar's frame snapped I have a new level of disrespect for carbon DH bikes.

vinay (Feb 11, 2018 at 13:38)
@IllestT: I'm under the impression that chainstay length for full suspension bikes is measured for the unsprung bike. If so, it is pretty pointless. Most (if not all) current full suspension designs have an effective chainstay length that stretches towards the sag point so it would be there where you'd want to see the chainstay length. Compared to one of these high pivot bikes (like the Commencal DH bike) chances are that at sag, the Pivot has a shorter chainstay than the Commencal. It is still a guess though, we're not given such info. So can't you just enjoy the marketing blah, go like "Ultra short chainstay? That's progressive, I need that." and buy the bike? Companies publish press releases for a reason, see?

What have you done to improve this?

How many frames has Bernard broken?

How far does your warranty go to support the rider of a broken frame?

pivotcycles (Feb 8, 2018 at 10:35)
@ryanme @Boulax @fodkip
Bernard Kerr has a ridiculously low track record for broken carbon Phoenix frames - in fact, the first production frame he was given came direct from our factory after the testing was completed. He then took that Phoenix and raced it at every event in 2016, eventually winning Red Bull Hardlines on it - and still, the frame was in perfect condition, no cracks or breaks at all.

However, if a customer experiences an issue on their bike, we want to hear about it. Our recently updated ten year warranty policy covers all Pivot Cycles frames purchased from an authorized Pivot dealer. Your LBS will work with Pivot to get a return authorization created so the frame can be inspected. You can also reach out to warranty@pivotcycles.com so we can discuss your case personally before processing the claim through the shop.

If a rider has broken a frame due to an impact or crash, a replacement part(s) will be made available at a minimum charge to the original owner. More information about our warranty policy can be found here: www.pivotcycles.com/warranty-information-registration

fossydh (Feb 8, 2018 at 12:04)
@Flowcheckers: Had PF for some years on two bikes and like it. Fast to maintain, light and no problems so far. But you need the right tools.

MikerJ (Feb 8, 2018 at 12:59)
I've personally dealt with Pivot over a recurrent shock malfunction. Not even really their problem. They handled it amazingly well. And, Chris himself got involved. To add, I worked with Pivot directly, not through a middle man. The way they dealt with the issue (and almost all well ridden bikes will have an issue) gives me complete confidence in buying anything from Pivot. They will take care of you.

uuuu (Feb 8, 2018 at 14:03) (Below Threshold)
@pivotcycles: "if a customer experiences an issue on their bike, we want to hear about it" - I think you just heard about a tonne of cases of the frames breaking right here, but apparently the frame is exactly the same still? Not exactly confidence inspiring. Warranties are a pain at the best of times (especially internationally, where reps are often less than fair with regards to processing warranty - friends of mine have experienced this with Pivot Cycles amongst others), not to mention the downtime. I'd rather just have something that's built to last.

waffleShirt (Feb 8, 2018 at 2:36)
My major memory of running these as rental bikes: Blown shocks and cracked frames.

milanboy1986 (Feb 8, 2018 at 3:26)
I guess Bernard or Pivot guys must really love the Sweatshop Union. The song from his last video in Whislter is also theirs.

gibbon-on-an-orange (Feb 8, 2018 at 4:34)
I was wondering when 'Try' would make an appearance after their previous edit. No complaints from me though, whenever I hear it I daydream my own edit cut to it.

milanboy1986 (Feb 8, 2018 at 5:06)
The first time I knew Sweatshop Union is "Cut Back" from a short edit of Gee Atherton riding Fort William World Cup course more than ten years ago. How time flies.

metaldude (Feb 8, 2018 at 17:28)
I owned a pivot Phoenix carbon, made me instantly faster!
Raced it two years podium every race. Not a single problem w cracks etc. I hit all the big lines , gaps etc.
The headset bearings were a little exposed and I had to constantly maintain cleaning the outside races to keep noise down but, I'm not sure what the cause is for that but ocurred w stock and top level CC headsets.
It was a solid bike for sure. I changed frame bearings once crunchy, before locking. I question people's reports of cracking at pivots to proper bearing maintenance and replacement? A lot of people neglect this and cause frame damage. The frame performs well all round, I'd call it a park bike w DH geometry. It excels at jumping and turning and agility. Can handle gnar but, not like the specialized demo I'm riding now. Both great frames just leaning into different characteristics. I always say there are lots of great bikes out there, finding one that matches you riding style is the one for you.

jbum (Feb 9, 2018 at 1:19)
After visiting Pivot HQ and seeing what all goes into these bikes it truly amazing. The amount of quality control Pivot has on their products is dumbfounding. If your are cracking multiple frames I hope you are using the right resources from your local IBD or from Pivot directly. Pivot will do anything and everything in their power to help you out. If Bernard can run a SINGLE frame for the entire race circuit without fail, you are setting your Phoenix up improperly or just a straight up hack. Cheers Pivot Cycles!

Prh (Feb 10, 2018 at 14:56)
Look like mean bikes, but as a fan of coil rear shocks the fact that they don’t play nice (in particular fox) on the pivots seems a little limiting. Would be interesting to hear if they have addressed this now.

dimitree (Feb 11, 2018 at 12:18)
Chinese operation with funds funneled through the US. Come on. If you're a DHer you know that weightweenie and DH don't have anything in common. The Phoenix is not a WC DH bred rig... it's a park bike that breaks...just ask Whistler bike park.

Trouterspace (Feb 8, 2018 at 16:13)
Does this bike not use the same terrible looking under the BB cable routing as their other bikes?

fossydh (Feb 9, 2018 at 16:27)
On the firebird but not on the phoenix. The bottom bracket is cable free and the routing is well done at the left side.

Trouterspace (Feb 9, 2018 at 16:31)
@fossydh: Thanks for the genuine reply and not mindless negative props.

AMGoran (Feb 8, 2018 at 10:46)
The person who colorgraded that video must almost colorblind because it was saturated af. Terrible to watch you just can't slap on a osiris lut and call it a day