Cam Zink to Attempt World-Record Back Flip at Mammoth Mountain 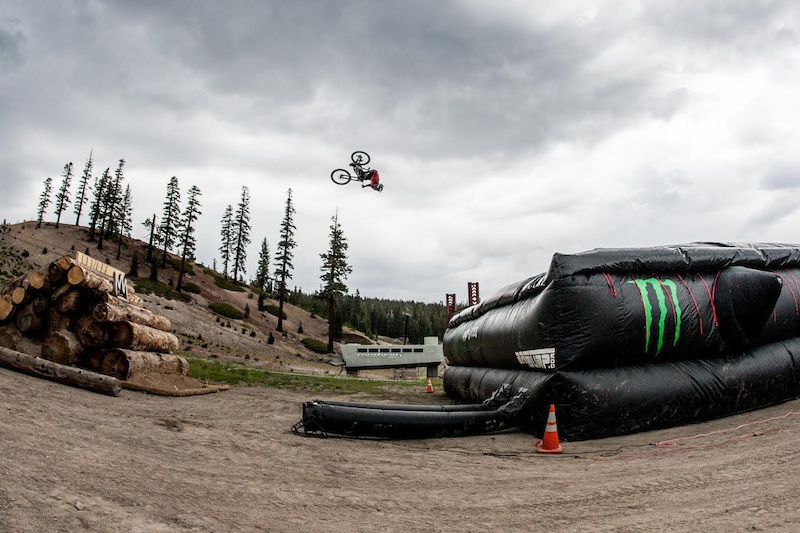 Mountain Biker Cam Zink is known for going big, but no one, Zink included, has ever tried to go this big. On August 21st Zink will look to make history live on ESPN’s “World of X Games: Mammoth Flip with Cam Zink presented by Monster Energy” as he attempts to land a Guinness World Record for the Longest dirt-to-dirt mountain bike backflip.

The attempt will take place at Mammoth Mountain’s Canyon lodge using a setup designed by Zink and built up by Mammoth Mountain’s Bike Park team. Zink is expected to hit speeds of up to 45 MPH before launching off a 15-foot high kicker, soaring 100 feet in the air (well past the current record of 78-feet) and landing on a 25-foot high landing/runout.

“This event gives us an opportunity to really shine a bright light on our sport,” said Zink. “Every day guys are doing things on mountain bikes that just defy what we thought was possible. It’s one of the fastest growing sports in the U.S. and hopefully the world-record attempt will give the sport some exposure and inspire the next generation of riders to dream big.”

“Mammoth Flip with Cam Zink presented by Monster Energy” will air live on ESPN on August 21 at 9:30 p.m. ET and on “World of X Games” on ABC, Sunday, August 24 at 2 p.m. ET. The world-record attempt was conceived as part of the “World of X Games” series, which features a variety of X Games and action sports athlete-focused content. For the most updated schedule and information on World of X Games, go to www.xgames.com.

“The X Games brand has always been synonymous with amazing athletic accomplishment and Cam's world-record backflip will be next,” said Tim Reed, ESPN X Games Senior Director, Events & Content. “World of X Games, ESPN and ABC will provide a tremendous platform to showcase the flip that Cam and Monster have developed with the fantastic backdrop of Mammoth Mountain.”

Mammoth Mountain and its 80 miles of single track bike park terrain hold a special place in mountain biking history having hosted the first-ever lift-assisted downhill mountain biking race. It’s a fitting venue for an attempt of this magnitude, especially given Zink’s life-long connection to the Eastern Sierra.

“Mountain biking had progressed so much in the last 20 years, and Mammoth has been an important catalyst of that progression. Our bike park continually pushes the envelope with input from the best riders out there,” said Bill Cockroft, Mammoth Mountain Senior Vice President. “As a Mammoth team athlete Cam is a huge part of that, and we’re thrilled that we get to host and team with ESPN in creating something this epic.”

Spectators can watch this event for free at Canyon Lodge. Festivities kick off at 6:00 p.m. PT with live music from Southern California rockers, Bad Suns. Food and beverage items available for sale.

About Mammoth Mountain
Mammoth Mountain Ski Area is the leading four-season mountain resort in California. With 1.3 million annual skier visits, Mammoth Mountain is currently the third most frequented ski resort in the United States. With a longstanding commitment to athlete progression and innovative freestyle and nordic terrain, Mammoth is proud to be an official USSA training ground. 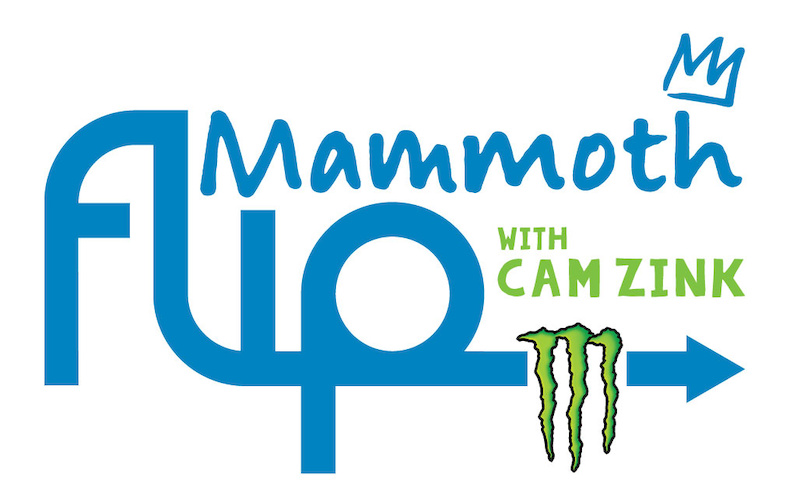 chrisclifford (Jul 17, 2014 at 16:54)
If you watched Rampage this year you can see that it is...She was almost crying when he flipped the drop and could barely watch. Zink's an animal

rideonjon (Jul 17, 2014 at 20:41)
he's doing what it takes to provide for his family,for some of us that means mundane work,for Zink a 100 ft backy.I'm sure if you asked Zink it's the mountain bike or the family,the bike would be gone in a heartbeat.

Martinezorlando (Jul 17, 2014 at 21:14)
go cam,but this type go's to those that forget why they work a 9to5,and that is to live,and CAM IS LIVEIN HIS LIFE,so be happy for him and do not type neg.,i know we must work but don't forget what makes you awww in life,so go ride for him or your self.

washad-steve (Jul 18, 2014 at 5:55)
What a poorly thought out thing to say. This is his job, what he did before he had a family, what he does to support his family, and what his fiance knew coming into the relationship.

Many of us take risks, often, and never get paid a dime for it. Do we not love our families or put them first, no! Life is meant to be lived, and part of what makes us who we are, what makes us better fathers,what makes our kids look up to us, is our adventures. Would Cam's finance even want him to stop?

He isnt stupid, with his skills and the safety features in place, this is a calculated and reasonable risk.

Really, why do some people care? He's about to throw down something unprecedented on a bike and people are too busy speculating about his at-home life... wtf has happened to mtbing?

randybadger (Jul 18, 2014 at 6:38)
What cam does is his own business. I'm sure his family are proud of his achievements and wouldn't have him any other way.
And talking of priorities how many of us have weaselled out of a family commitment to go biking?

jaycubzz (Jul 18, 2014 at 7:23)
Wow, you people need to work on your comprehension skills. Read northcuts comment and then try again. Geeeeeeeeeeze

randybadger (Jul 18, 2014 at 8:56)
Think we all understood northcuts comment. Interpretation is another thing though. Bottoms line, cams choices aren't ours to judge. I'm just glad to see him going big.

jaycubzz (Jul 18, 2014 at 10:32)
@randybadger theres really only one interpretation of the comment made. Im not saying its right, its just the only way it could be broken down, which is stupid and absurd and obviously not how Cam lives his life.
It was a poor choice of phrasing, thats all (i hope)

tremeer023 (Jul 18, 2014 at 12:09)
This is Cam Zink's career not just a job. Not only that but he is a pinnacle of the sport trying to push boundaries and inspire a generation. Imagine if Neil Armstrong had changed his mind due to family commitments back in 1969 because he didn't want his family to worry. Good luck Cam, you have the support of all true sports enthusiasts.

aydnlunden (Aug 21, 2014 at 18:56)
found a live link but it said i cant watch because im out of the states so yeah guess ill just have to watch replays

But I personally think spoiling the stunt months before an event takes an edge off the whole thing.

Take Kelly's canyon Gap at rampage for example. No one saw it coming. It made the WOW factor go +1000!

TwoWheelKing (Jul 17, 2014 at 21:07)
Ya, but for the rider, calling your tick in advance makes it way more gnarly. Once you call it, you have to do it or risk loosing your reputation as a rider or get scored poorly (if its in a competition). I don't know of any other rider who calls out what trick they'll be pulling in advance like Zink. Got to respect that.

scandal667 (Jul 17, 2014 at 21:10) (Below Threshold)
I think saying "in my opinion" is redundant and if you throw in humble you deserve immediate ridicule

fabdemaere (Jul 17, 2014 at 23:06)
I think it's a way for the rider to commit. You're less likely to chicken out if the whole world knows what you're planning on doing

GiraffeInPurple (Jul 17, 2014 at 23:09)
Scares me when dudes wanna push the sport father look at Bruce Cook trying to double front a dirtbike and totally f*cked himself

pourquois-pas (Jul 18, 2014 at 9:01)
The event needs to be hyped to make it pay for itself. No way a post-flip video alone would generate enough ad revenue for Monster to be in on it

Anyhow, to me it's like watching a hockey game and knowing in advance who will win and what the score will be.

calebscott (Jul 17, 2014 at 17:35)
Anyone else remember when mike montgomery was gonna do this a couple years ago. At mammoth too.

bplatte (Jul 17, 2014 at 19:21)
What is Montgomery up to now a days anyway? I have not really heard anything about him lately, did he get injured and I missed it?

choppertank3e (Jul 17, 2014 at 21:19)
So who has the record for 78 feet? If he can flip down 50 feet first go and pin it completely you gotta know he can get this one he's been practising into the bag. With Wide open cancelled and SS getting uber competitive this should keep the sponsors happy and pay the mortgage. Not to mention representing MTB in the x-games community.

stupendousman (Jul 18, 2014 at 0:26)
Zink himself has the 78 ft record I think, that's the official dimension of the Oakley sender flip. Kelly's 74 ft. canyon gap flip in close second.

pourquois-pas (Jul 18, 2014 at 9:03)
^^Can't be from either Cam or Kelly's Rampage flips, the 78ft record if dirt-to-dirt. Still curious who holds the record, 'cause unfortunately Monsters SEO team is good and when you search anything related to record and mtg and flip all you get is news about this upcoming event.

They were referring to the Rampage flip drop after all.

I ask this every time I watch Rampage....or those extreme Red Bull stunts. The price of fame, to be the first, to make lots of money via sponserships deals.

One would imagine Yeah, it's worth it. However, what if he fails and worse what if it ends his entire career? He's doing it for our sport to shine so I give him mad props. I just hope you makes it~~

bikeetc (Jul 18, 2014 at 23:57)
saw him practicing the jump yesterday and the distance from take off to air bag was a lot further than this pic. really nice guy, took a picture with my kids and was highlight of their trip. good luck cam and godspeed

Oh yeah thanks for the support there ESPN. WTF aren't we in the fvcking X-Games ya cvnts?

Good luck Zink. It's about time someone bothered with this & it seems to be your department.

As for the whole "Zink don't do it you have a family now" there's more to family than having a kid. Before Zink had a kid he was someone's child, someone's husband, someone's brother ( maybe), and many peoples good friend. Everyone has family, and someone is going to be at the top pushing the sport. This is Cam Zink's time. I hope he nails it and the next 100 insane things he will do to progress and grow mountain biking. Best of luck Cam!

freeride-forever (Jul 28, 2014 at 16:16)
@north-shore-bull-shit, you some kinda dumbass? I couldn't care less what kinds of risks anyone wants to take, but for the sake of making what should be an obvious point, all those others you mentioned are not dependants & they all had a choice. Offspring do not.

Why anyone would ever fly a single f*ck about how a parent or a sibling feels about one's activities is something so stupid that it deserves no consideration at all. The spouse knew what's going on in the first place & made their choice. It's pretty simple.