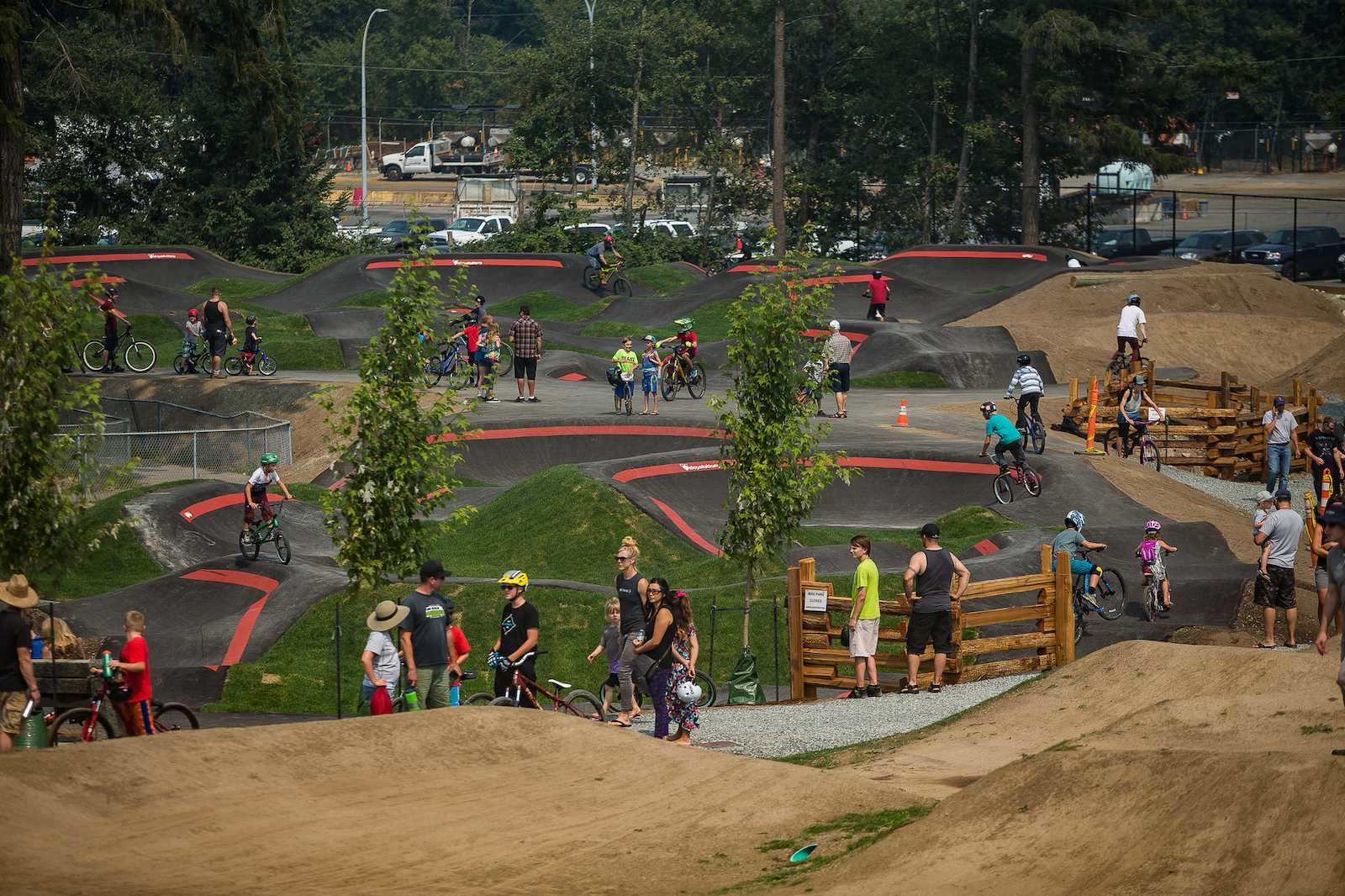 OPENING DAY AT THE
STEVE SMITH BIKE PARK
Words & Photography by Fraser Britton
2500 square meters of heaven.
The last time a big chunk of Canada's gravity powered cycling community took a ferry together, the atmosphere was subdued. There were tears and there was lowered voices as everyone made the 90 minute trip across the Strait of Georgie to Vancouver Island. Yesterday, another heavy crew assembled to make the same trip but this time it was to celebrate a community coming together to create a legacy instead of to say goodbye. The sombre mood from just over a year ago was replaced with big smiles and loud jokes. Button up shirts were left behind as riding kits and XC lids were the outfits of choice.

Forget the world cup wins, the Canadian championships or that "what-ifs". This bike park will be Stevie's legacy. Not only will the talent it helps create keep the Canadian team strong in the future, but it gives the kids of Nanaimo a safe place to ride their bikes and put their energy towards something constructive that will keep them out of trouble.

Consisting of 3 dirt jump lines, 2 massive asphalt pump tracks and even a mulch jump, it's the largest skills park of it's kinda in North America. The numbers that went into the construction are staggering.

The 2 pump tracks are over 2500 square meters in size, with an advanced track with lines galore, and a smaller kids beginner track next to it. Claudio Caluori and Velosolutions put their heart and soul into this build over the last month, and it shows. Over 260 tons of asphalt have been carefully manicured one wheelbarrow load at a time (3250 of them!) into bicycle artwork.

Donations from the entire community, along with the Steve Smith Memorial Fund as well as the City of Nanaimo all came together to fund the construction of Stevie's dream. Considering the speed at which government normally works, the year in planning it took to make this a reality is impressive.

The Dirt jumps were built by Island native Jordie Lunn, with help from Darren Berrecloth. They threw dirt for weeks to shape the Alpine Bike Parks designed lines to near perfection. Wooden lips on the more advanced jumps will make sure they keep their shape for a long time to come.

What better way to celebrate the opening of a bike park than to give away some bikes to underprivileged kids? Pinkbike's Share the Ride worked with Gabe Fox to give away 26 bicycles to deserving kids from around Nanaimo during the opening ceremony. GT Bicycles, Norco, and Devinci all stepped up to support this. Fox Head provided fresh helmets and the RCMP was there to register their new bikes in their anti theft program.

What a day, and what a way to honour Stevie's legacy. Tianna Smith, Stevie's mom, sports the only headwear appropriate for the opening of a bike park built in the memory of someone nicknamed the Chainsaw. 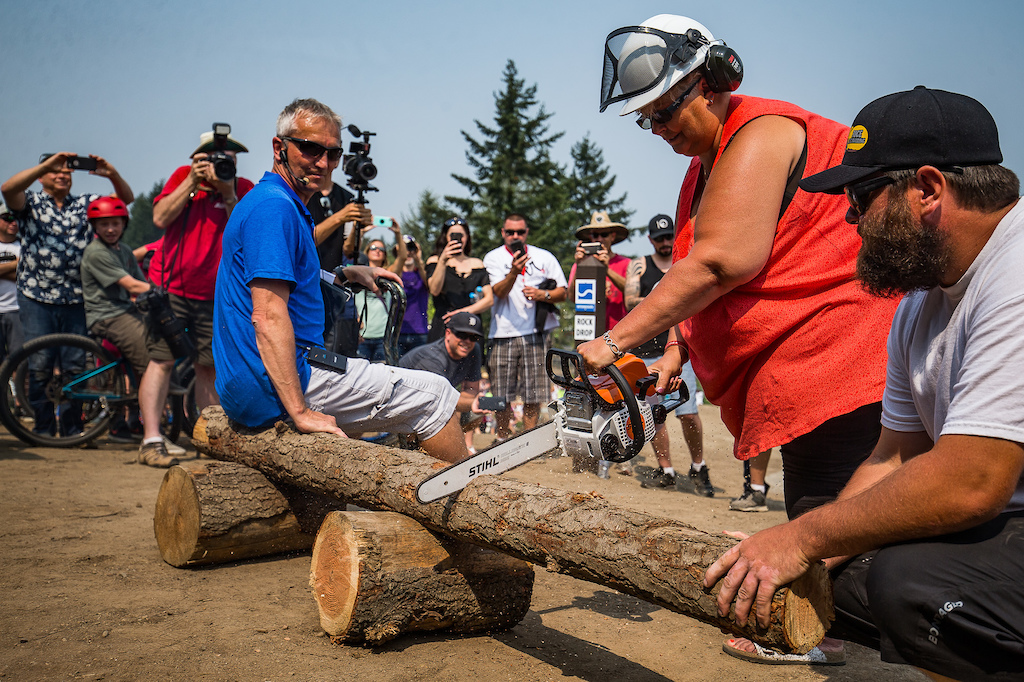 Forget ribbon cuttings; THIS is how you open a bike park. 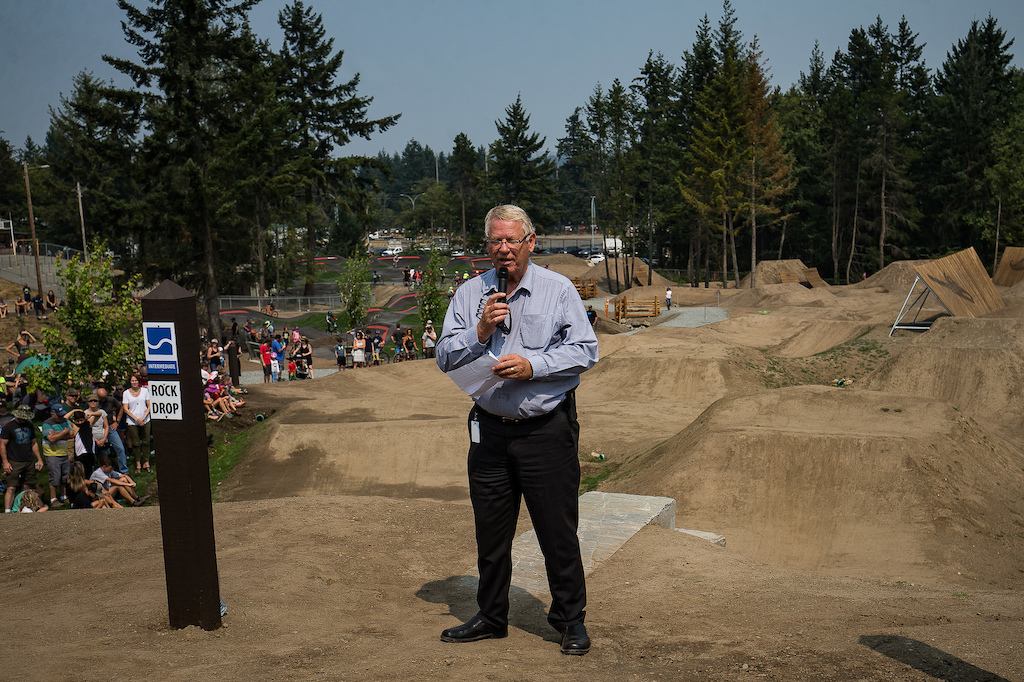 Bill McKay, mayor of Nanaimo, speaks to the assembled crowd during the opening ceremony. Michelle Corfield addresses the crowd at the opening ceremony. As one of the main organizers behind the Legacy Fund, as well as a close family friend, Michelle moved mountains to make this come together. Builder's privilege. Jordie Lunn put in the blood sweat and tears to build these jumps, he gets to lead in the celebrity train. Mark Wallace was all smiles today as he got to put wheels to dirt on his best friend's legacy. Jordie Lunn can do more than just shape the dirt, he can also throw some shapes. 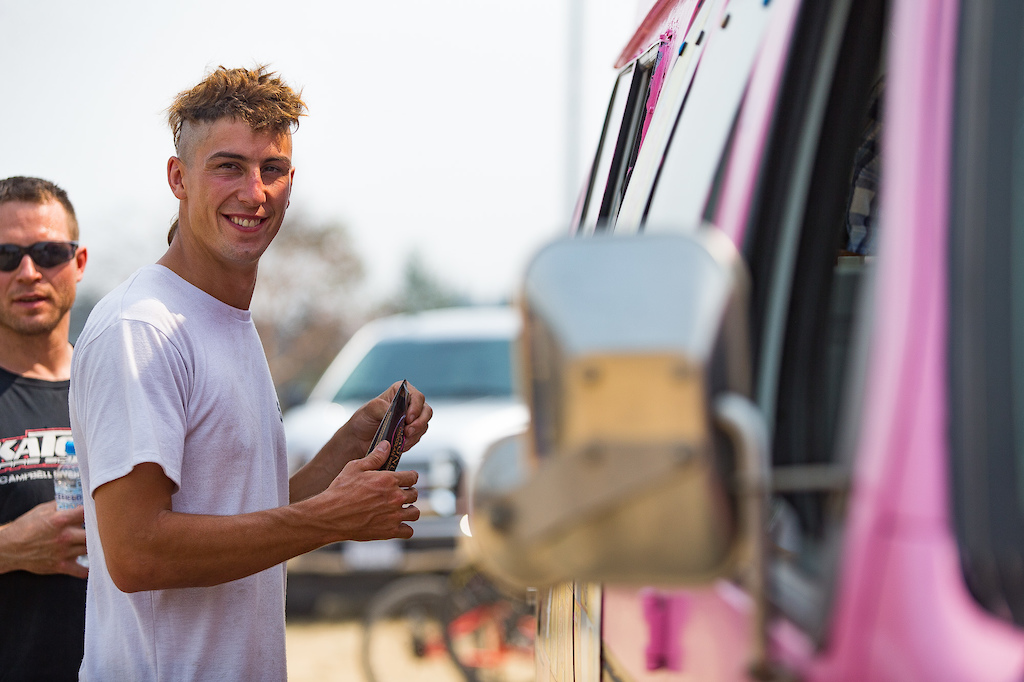 Ratboy headed straight from the jumps to the ice cream truck. With 30c+ temps and forest fire smoke heavy in the air, it's no wonder this truck was doing brisk business! More stoked kids, just wishing the adults would stop talking so that they can drop in. Recently a proud father, Darren Berrecloth went straight into dad mode and was all smiles helping this recipient of a Share the Ride bike get settled into life behind bars. Your tattooed, giant teddy bear of a dirt wizard. Leave it to Jackson Goldstone to be a ham. Josh Bryceland was all smiles as the wheels hit the dirt and things got underway. Steve Smith is my Co-pilot. This kid wins best T shirt of the day. A heavy crew of Canada's best gravity riders as well as a few foreign ones made the trip over to the Island for the grand opening of the Steve Smith Bike Park. Details abound, everywhere you look there was a reminder about who's dream this was. The details are everywhere. With his shirt reading Steve Smith is my Co-pilot, this little guy was sending it all afternoon. Brook MacDonald showing that it's not only the little kids who were having fun! Get yours now. All proceeds to The Steve Smith Legacy Fund. There was plenty of free food and water on hand thanks to local grocers donating supplies. 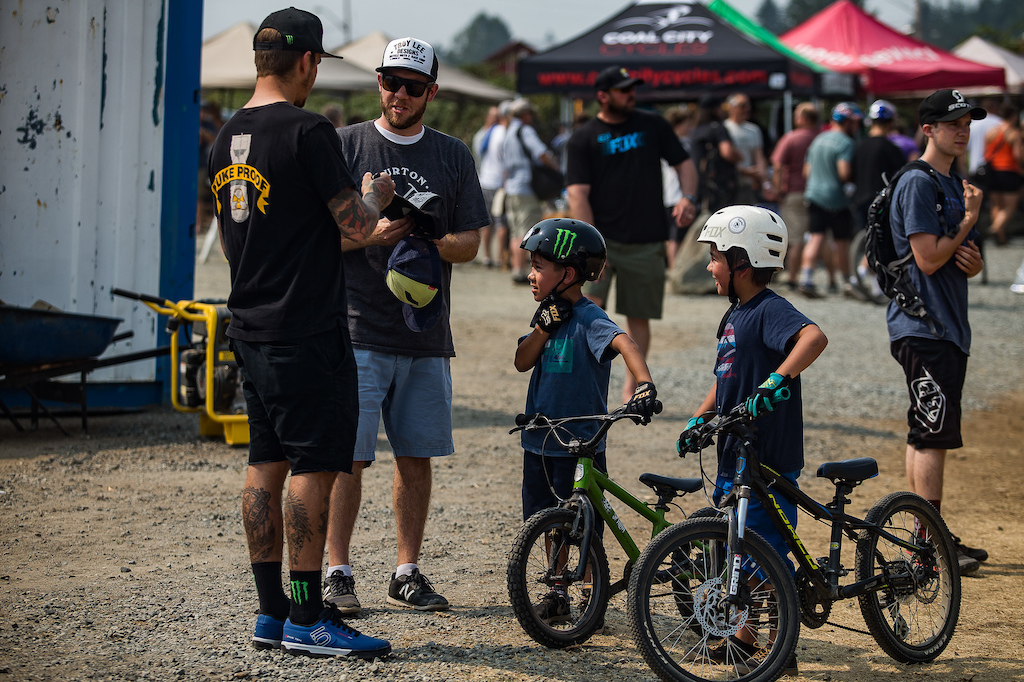 Sam Hill makes some kids (or maybe their father) stoked with a couple of autographs. 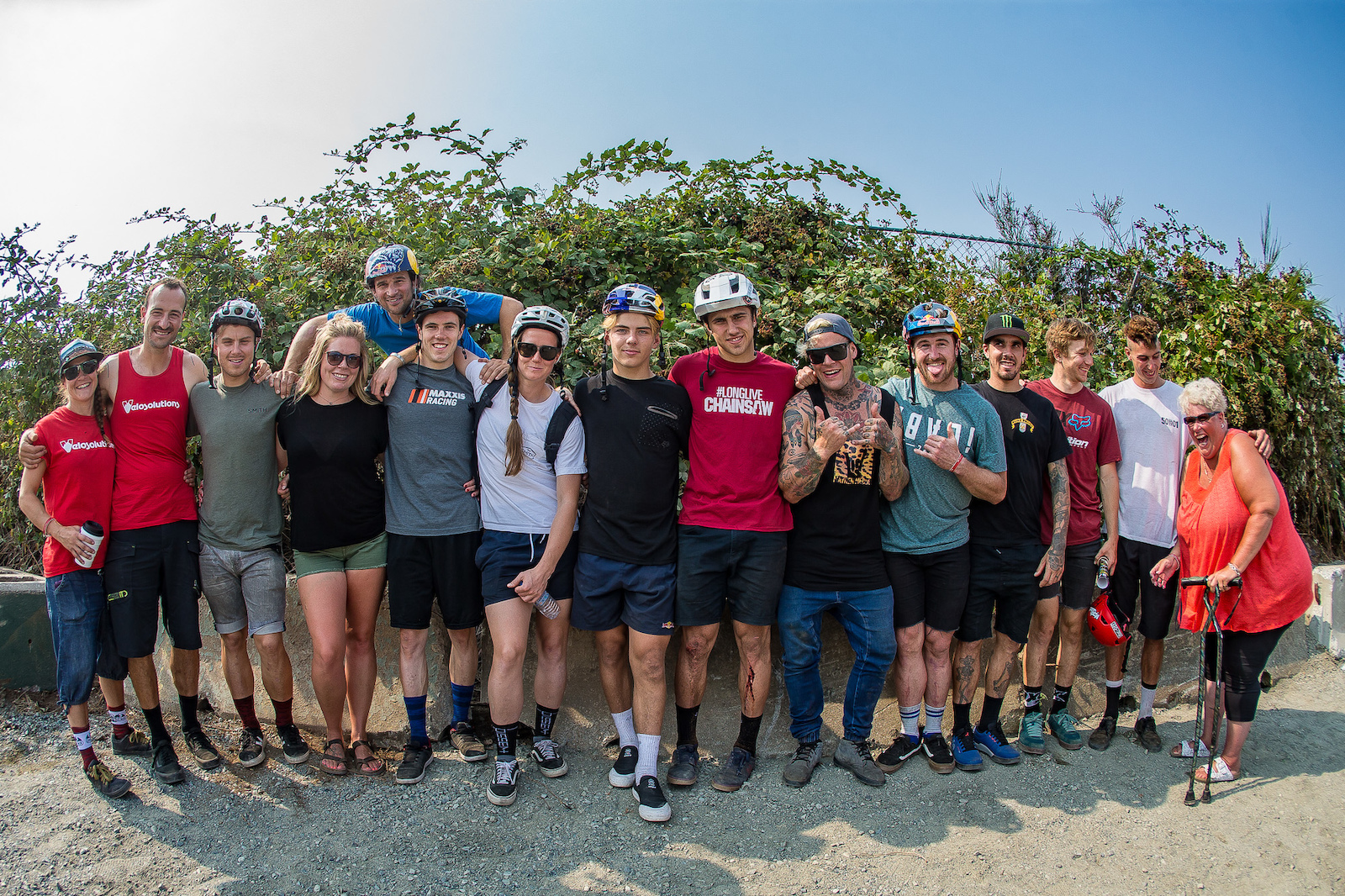 A big crew of Canada's best and a few of Stevie's friends from around the world along with his Mom Tianna and sister Kara.

gtrguy (Aug 10, 2017 at 11:13)
So freaking awesome! LOVE this. Seeing all those people smiling and having fun in Stevie's memory- way to go biking community!

cunning-linguist (Aug 10, 2017 at 12:28)
Yeah! That last photo with Stevie's ma with the biggest grin, sends goosebumps all over! :-) well done to everyone that's had anything to do with this! Brilliant work!

The lad with the winning T-shirt also looks super stylish in the air too, is he the future or what?!!! :-)

Also, no mention of Bill McLean (a star of the movie builder) and the massive amount of effort he put into the jumps alongside Jordie Lunn and Darren Berrecloth??

rockin-itis (Aug 10, 2017 at 17:50)
Went to the opening. It was incredibly well attended and the amount of riders sending it on this opening day was crazy. There were tykes on run bikes all the way up to middle aged riders. Massive success and huge props to all those who made this happen. This is something really special for this community and everyone knows how lucky we are to have this incredible gift. Thanks to Stevie and all those who worked so hard on this.

ross005 (Aug 10, 2017 at 12:29)
Nice timing (intentional or not) for it to be somewhat close to Crankworx and having a bunch of the pros around and available to help ignite the stoke for what looks like amazing bike park

VwHarman (Aug 10, 2017 at 11:56)
Went with my 3 year old yesterday to the opening. Way too cool. Kudos for incorporating share the ride as well, that made me get a wee bit teary!

LucBen447 (Aug 10, 2017 at 15:21)
This is incredibly cool! I was literally brought to tears while scrolling through these pics...such a beautiful thing to leave behind for everyone else who shares Steve's passion, and to further add to his supreme legacy in the cycling world! I've never been biking outside of Texas, but I sincerely hope I'll be able to visit and shred there someday! #longlivechainsaw

pedalhound (Aug 10, 2017 at 13:14)
I watched Colin's live stream and got teary when Tianna opened the park with the chainsaw. I gotta go up and check out the park one day soon...looks amazing!

AntN (Aug 10, 2017 at 14:36)
Simply amazing. Great to see great parks being built. A little annoyed that the local bike park where Iive, the council won't even seal the shuttle road, let alone help build awesome jump lines etc. You must cherish having an MTB friendly council because they are few and far between.

moss21 (Aug 10, 2017 at 16:10)
Steve was a local and we are really proud to say he was from here as he was proud to say the same we miss him and it was his dream to help kids to get into this amazing sport and we'll what better way to tribute a legend then build a bike Park named after him #longlivechainsaw

spencerbrawn (Aug 11, 2017 at 8:49)
@Stevesmom: Kudos to you and everyone that made this possible! It's unbelievable that we have this in Nanaimo and I look forward to my kids growing up using the park.

moss21 (Aug 11, 2017 at 22:19)
@Stevesmom I knew Steve through mutual friends and every time we hung out he always made everyone laugh that's just how he was. THANK YOU for being the amazing mother you are and for the fantastic job you did raising Steve he was an amazing guy even though I didn't hang out with him all the time I still considered him to be one of my friends.

north-shore-bike-shop (Aug 10, 2017 at 12:19)
Wonderful work! Thanks for doing this everyone involved. Can't wait to ride this park soon!

krashDH85 (Aug 10, 2017 at 12:51)
Jeebus. Heartstrings...definitely going to dedicate a lap to him @ Crankworx. Was nothing but an insanely great guy the few times I had the honor of meeting him.

dorkbike (Aug 10, 2017 at 20:35)
This is huge, not only for Steve Smith's family but the community as a whole. Those pictures of his mom smiling are the best.

Tvaneijk (Aug 11, 2017 at 9:59)
I manage a shop under 2km away. I suck at dirt jumps but it's great I can get some practice before and after work everyday. long live chainsaw

Scottcoulthartryde (Aug 10, 2017 at 12:35)
This is great wish I could've gone maybe on the weekend where can I get the socks other than online