What a year of racing we've had in 2019. As the riding and coverage continue to improve, the events just become more compulsive viewing each year. The only downside is that we spend so much time watching racing, it starts to eat into our riding time!

This year was the first time we've had more than one XC athlete nominated as both Kate Courtney and Mathieu Van Der Poel got nods. We've not changed our criteria, but XC has continued to grow as a discipline - courses are no longer velodromes where you have to steer around the rocks, but real trails with brutal climbs and technical descents. If you want proof, just watch Levy's recent Humbled video with Nino Schurter to see the level these riders are at.

That's not to say we've forgotten about the gravity side of things either. Courdurier delivered a perfect run of 8 victories in a championship-winning season that she's been threatening for so long, while Loic Bruni emerged victorious from a titanic duel with his countryman and friend Amaury Pierron to claim his maiden World Cup overall win and becoming the first man to do the double since Sam Hill in 2007.

So four very worthy contenders, but who triumphed and claimed the top prize? 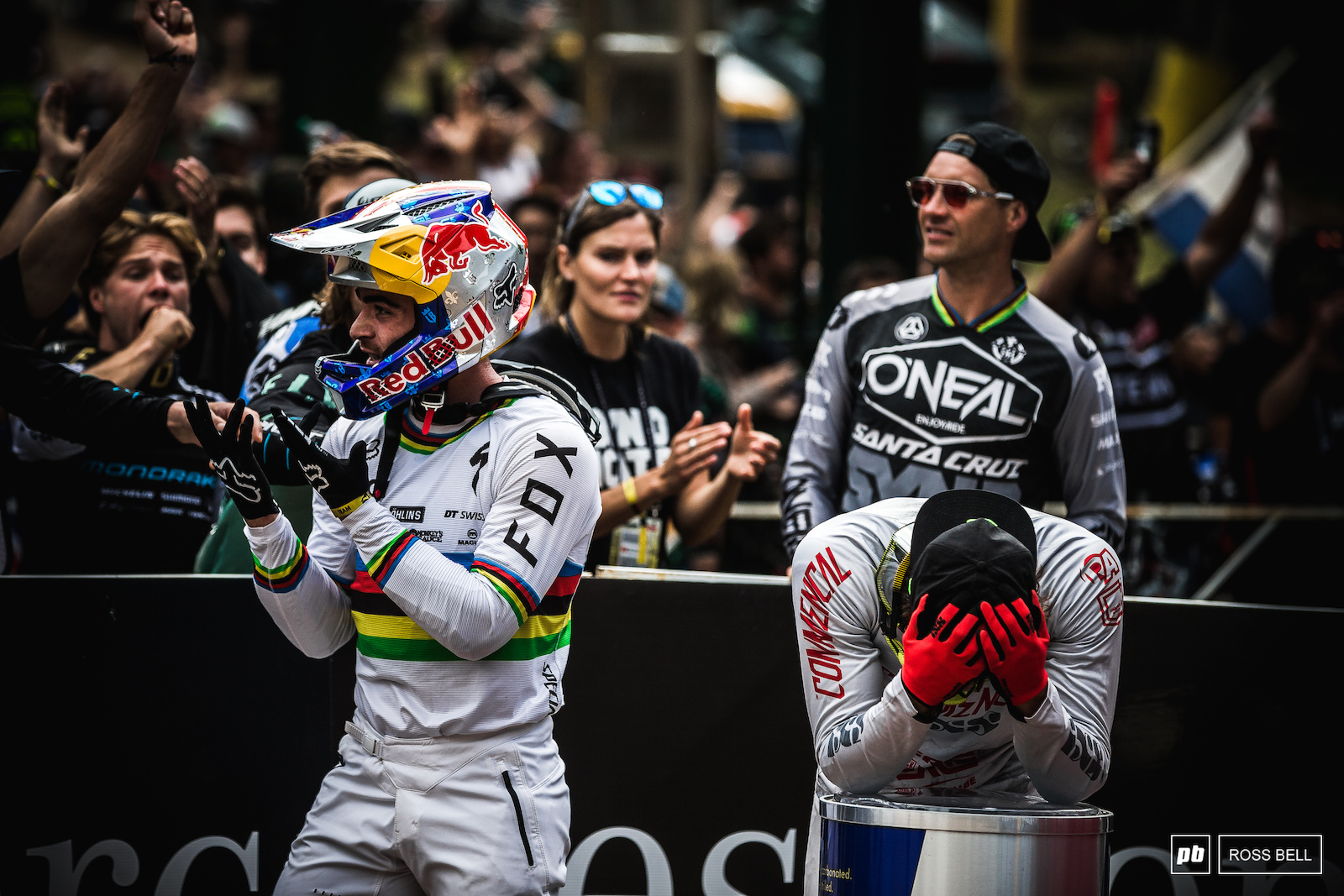 Athlete of the Year
ATHLETE OF THE YEAR

It would have been all too easy to fall at the last hurdle, but Bruni held it all together and emerged as champion.

It's said that championships are won on your worst days, not your best. When Loic was in his groove this year he was simply untouchable - take a look at Vallnord where he found 3 seconds on the entire field in the first sector alone despite most people writing it off as a place where practically no time could be gained. Contrast that with his final race run of the season, far from his usual smooth and clinical self, this was scrappy, off line and wild.

It was the run of a man who was feeling the mental and physical toll on his body after a season of intense scrutiny. Crucially though, it was fast. It would have been all too easy to fall at the last hurdle, but Bruni held it all together and emerged as champion. Loic's struggle to the title made the World Cups compulsive viewing this year and the final in Snowshoe will probably go down as one of the greatest in history.

Bruni has come of age this year and found the consistency that has been missing from his arsenal since he moved up to elites. He is the first man to win the double since Sam Hill in 2007 and only the second man ever to win 4 World Championship titles. At 25 years of age, there's still plenty more to come.

erikkellison (Dec 23, 2019 at 18:52)
@bongpill: I honestly found myself thinking “Who?” when reading your comment, but after reading the very tiny review of her complex comeback, indeed, that is very worthy of recognition. Strong work, PB, on the athlete selections this year.

jimeg (Dec 23, 2019 at 16:57)
Nah. Danny may have helped with the final race points, but Loic worked hard on his physical and psychological to deliver all season long, for his best season ever. Loic earned this. Good call Pink Bike.

Upduro (Dec 23, 2019 at 12:20)
The downtime podcast with him was so interesting to listen to, hearing what happens in his mind at races and how he deals with the pressure. And fully deserved this award, fucking fantastic season and making it absolutely amazing to watch as it unfolded.

downtimepodcast (Dec 24, 2019 at 3:39)
Glad you enjoyed it @Upduro Loic was so open and honest, he was a pleasure to interview.

lassemj (Dec 24, 2019 at 9:00)
@downtimepodcast: I agree with Upduro, that interview was definitely my favorite downtime episode. Hope you'll be able to interview him again some other time.

bulletbassman (Dec 23, 2019 at 13:48)
@Rigidjunkie: He's too cool for school. Bumped into him watching the xc finishes and it was like runnin into a guy you had a class with in middle school as a bar at thanksgiving.

JPHI (Dec 24, 2019 at 0:06)
All great athletes and I was hoping Loic would beat Amery but if I had to pick an Athlete of the Year is would be Isabeau Courdurier. There were a lot of close races in DH and EWS this year but not the Womens EWS, she absolutely dominated from start to end.

cvoc (Dec 24, 2019 at 2:30)
That’s probably why she didn’t win. Before this year it was Ravanel who dominated everything. And before that Moseley. For me that indicates that the field is just very narrow. The women’s XC on the other hand is a lot more competitive.

macimecdufour (Dec 24, 2019 at 3:06)
As a long time bruni fam, this year has just been crazy, constantly scared he'd throw a winning run away in the last corners like so many in the past! Though this year he's just been on rails! So deserving in my very biased opinion!

tacklingdummy (Dec 23, 2019 at 15:08)
All the nominations are worthy. Tough choice. It would be cool to make it into a reader poll, but on PB all the winners would be DH and EWS riders.

aljoburr (Dec 23, 2019 at 22:27)
So will technology advancements be allowed to continue to affect the results?
If it was not for computer software,Amaury Pierron would have won DH World cup overall!
Is that fair?

chacou (Dec 23, 2019 at 15:46)
Yeah, she crushed it, and yet no mention. No mention of Sam Hill. Pretty rocky start to the EWS season, and then turned on the consistency to remain in the hunt and closed it out in that close finish against Flo in Zermatt. Bruni was pretty unstoppable all year though, this is a tough category.

JohnnyVV (Dec 23, 2019 at 15:35)
Yes, was just thinking the same. Why they wouldn't give athlete of the year to a guy coming off a doping suspension is absolutely beyond me. Someone must have spiked their bottle while they were deciding on these...

oneheckler (Dec 23, 2019 at 16:15)
Maybe he should have won the most hard World Cup winner of the decade ,but the best athlete?nino and don’t forget the Xc woman’s winner cause that was a hard ,and Sam and isa ,and let’s not forget Tracey cause it was not easy at all ,but in the end c’on you have to give it to Marie because it was absolutely out of this world ,but congrats to all of the man and woman in this sport.

topbike21 (Dec 23, 2019 at 16:59)
Truly deserving. I'm glad they didn't go with a politically correct choice such as Kate Courtney or Kate Weatherly.

CaliCol (Dec 23, 2019 at 19:08)
@mbl77: you know what it means you jackass and I will second the joy of body politics not prevailing in these proceedings.