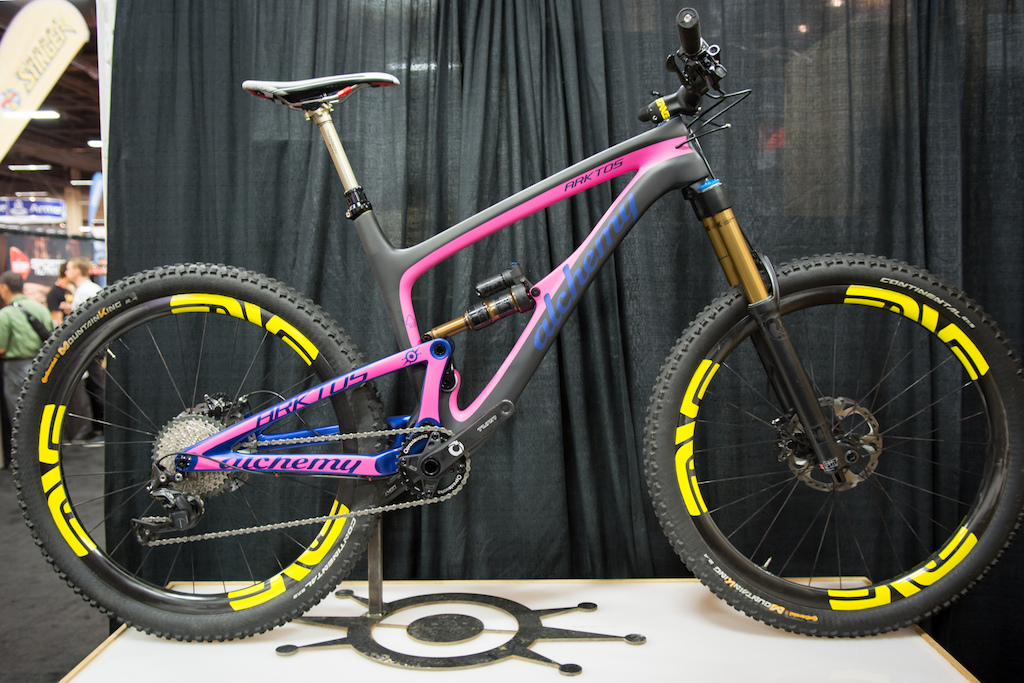 Alchemy may not be a household name in the mountain bike world, but that could change with the introduction of the Arktos, the company's new carbon fiber framed all-mountain rig that's made in the United States. 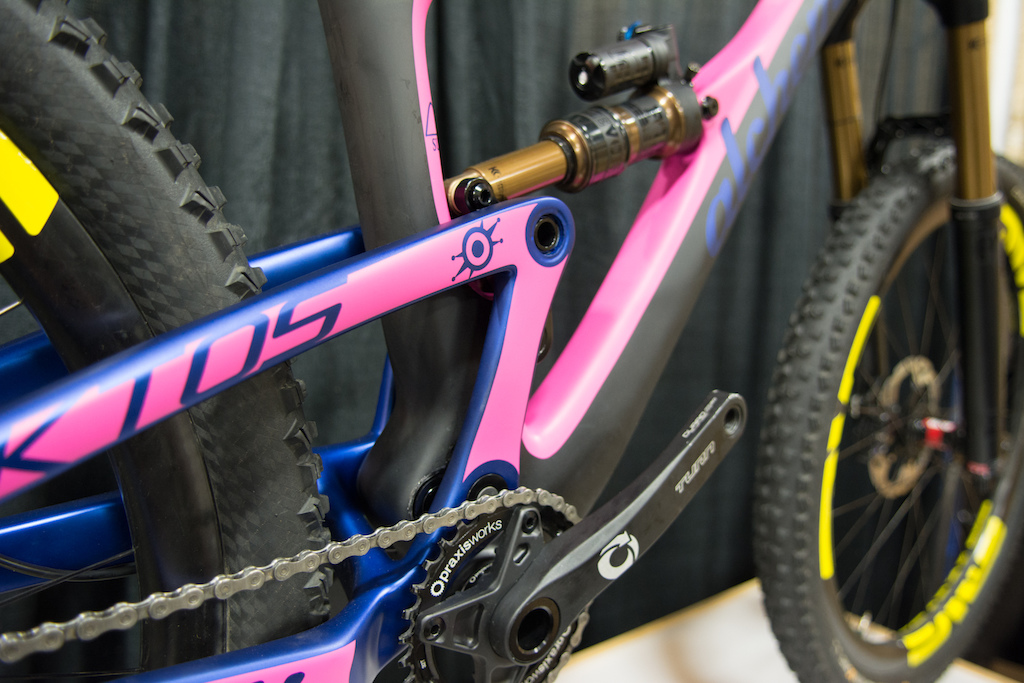 Sine Suspension was created by Dave Earle, whose impressive resume includes developing Yeti's Switch suspension system, along with stints as the Senior Engineer at both Santa Cruz and Specialized. In other words, he knows a thing or two about designing a mountain bike – this isn't his first rodeo.

The Arktos' Sine Suspension is a dual short link design, with the lower link tucked away inside the frame. According to Alchemy, this design creates a suspension curve that's regressive up to the shock's sag point, and then progressive until the last 15% of the bike's travel, where it becomes regressive again. 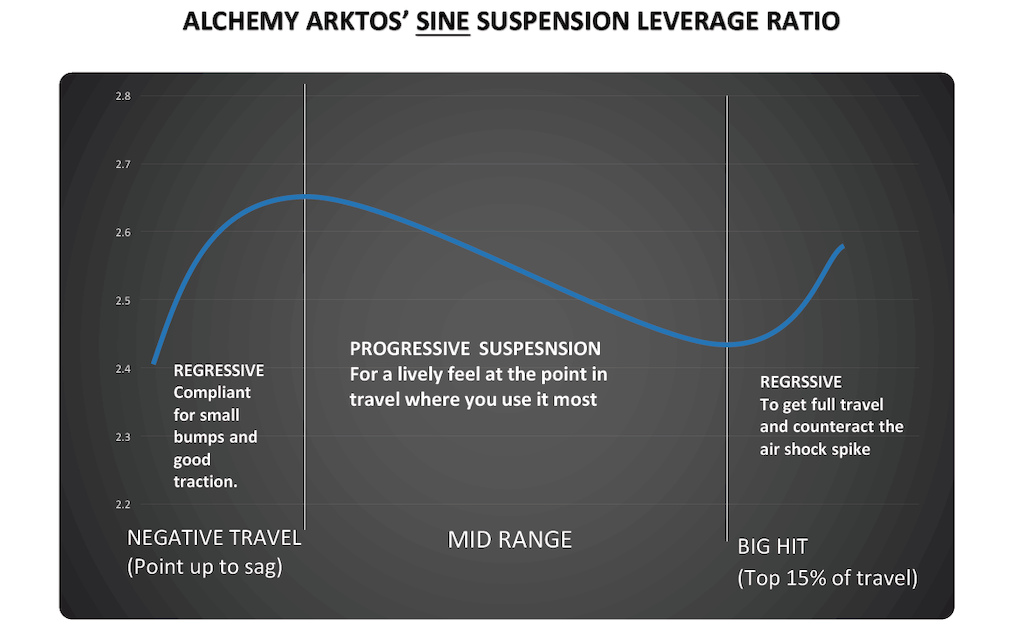 That last bit of regressive travel is where the design differs from a VPP design - on VPP bikes the curve remains progressive for the entirety of of the travel. Because air shocks are inherently progressive, ramping up towards the end of their stroke, having the suspension curve become regressive is meant to give the bike a bottomless feel, allowing it to remain supple even during large impacts. 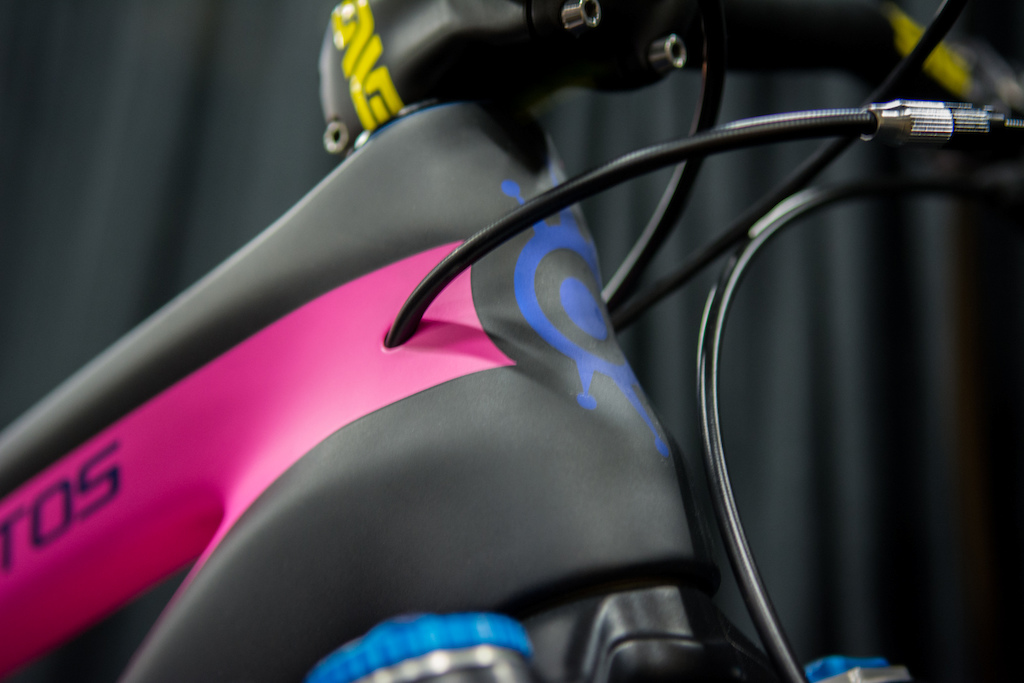 Internal routing is in place for the Arktos' brake, deraileur, and dropper post housing.
Geometry 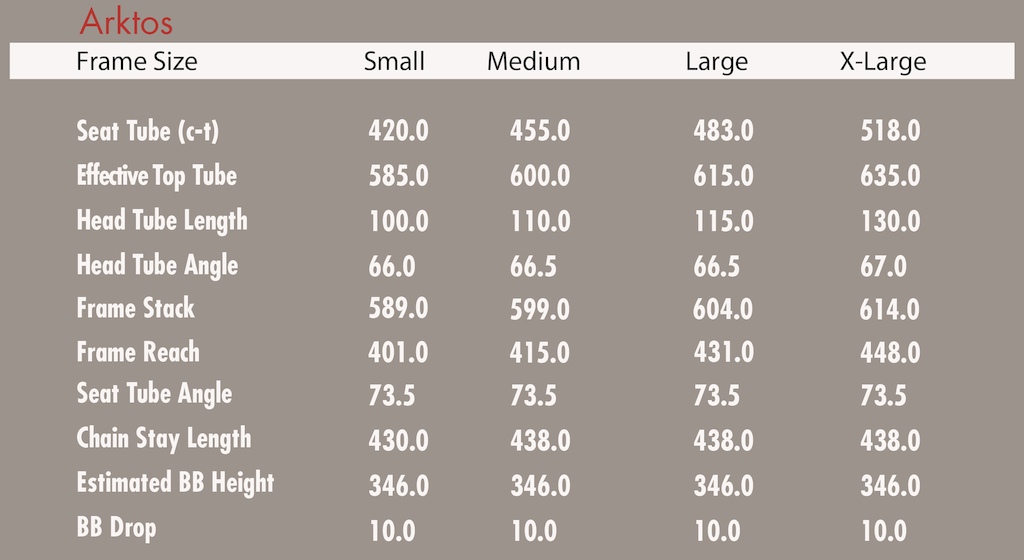 As far as geometry goes, the Arktos' number are slightly conservative compared to the long and slack bikes that have been coming to market lately, with a 66.5° degree head angle, 438mm chainstay length, and a reach of 431mm on the large sized frame. There will be four sizes, small to extra-large, and two stock colors will be available, along with a custom paint option that opens up a wide palette of possible of color options. The frame with shock retails for $3,750 USD, which certainly isn't cheap, but it is only $50 more than a Specialized S-Works Stumpjumper frame, or $250 more than a Yeti SB6 frame. It's also dramatically less than Alchemy's full custom road frames, which go for nearly $7,000.

rippersub (Sep 16, 2015 at 23:14)
I saw the picture and instantly thought of the SB6c. Surprise surprise in the next paragraph it's designed by the same guy. I just struggle to understand how one guy can design multiple companies platforms and for them to all claim theirs is the best. Surely this guy knows which one of his designs is best.

lukachadwick (Sep 16, 2015 at 23:20)
Clearly yeti because it's all about having a showy headtube badge to show your bike is the best right?

jaame (Sep 16, 2015 at 23:35)
They are all the same.
I like this bike. Good price too. I would never buy a four grand frame made in China. It just proves their spiel about R&Dis complete bs. At least you know this cost more than $8 to actually make.

Good luck to you guys. I'd love one!

jlhenterprises (Sep 17, 2015 at 0:12)
I thought the same thing when I saw the picture. I am very interested in this bike, wonder if it rides more like a 575 with the shock open with that suspension design

fabdemaere (Sep 17, 2015 at 5:13)
Dave Earle is the name,
Suspension design is his game.
Switching from brand to brand,
Dude's all about making that grand.

Truth be told he liked Morgan Hill,
Until they proved they had no chill.
Suing a man for the name of his store,
Earle went "f*ck it, I'ma quit this bore!"
His next employer was Rob Roskopp,
Tryna give the V10 a bit more pop.
Assignment turned out to be quite the task,
Earle went "boy, that's too much to ask".
Then came his time working for Yeti,
The job turned out to be quite Petty.
Switch infinity was his next grind,
Now he gon' put it all on the line,
Working for a brand that noone knows,

If it works out he'll get all them hoes.

SB66 (Sep 17, 2015 at 7:51)
As far as I'm aware Dave had nothing to do with switch infinity. Sure he was the mastermind behind the first switch (eccentric), but you can't give him credit for infinity.

Krispy-at-Go-Ride (Sep 17, 2015 at 6:40)
So funny..bottomless.. If you never get your wheels off the ground its nice to be able to get full travel. But for the rest of us, progressive rate provides a bottomless feel. Beautiful bike though, and its great to see a bike made in the States!

pe6u (Sep 17, 2015 at 1:23)
"having the suspension curve become regressive is meant to give the bike a bottomless feel", wow read so many times progresivness is meant to do that, regresive means easier bottoming, how is that "bottomless".

phobospwns (Sep 17, 2015 at 5:21)
if it's used with an air shock (which tend to ramp up as you go through the travel), a regressive suspension curve would actually give more a linear feel, vs. a progressive curve with an air shock, which would ramp up considerably, thus heavily resisting bottoming out- and "ruining" the "bottomless feel".

connorjuliusjohnson (Sep 16, 2015 at 23:02)
Definitely a bit. I like it, at least talking aesthetically pleasing (frame design and colors in my opinion).

Bluefire (Sep 16, 2015 at 22:57)
I don't much like playing the skeptic, but I am a little confused. This looks a lot like Yeti's original Switch platform, with a small link instead of an eccentric. Didn't Yeti move away from a short lower link (eccentric) because it was causing the bike to hang up on square-edge hits? And didn't Switch Infinity successfully solve the problem? If Mr. Earle designed Switch as well, how is this functionally different from Switch?

Regardless, no prejudice - I'll reserve judgment until I've ridden it.

Kustomango (Sep 16, 2015 at 23:45)
Was it squared edged hits?
I thought it was the lack of sensitivity caused by the neccisary change in a (relatively) large rotational mass half way through the travel, and the friction of such a system?

In agreement with you, need to ride it first

mainlane (Sep 17, 2015 at 0:53)
I believe Yeti moved away from this as they were sued for patent infringement by Decathlon who uses it for their "neuf" suspension bikes (B'Twin) in europe. You can google it easily.

somismtb (Sep 17, 2015 at 1:24)
I'm sure this guy wouldn't inherently design the same flaw into another suspension platform. This is his art, and he wouldn't want to be held accountable for another flaw

cunning-linguist (Sep 16, 2015 at 23:05)
Aesthetically beautiful, most bikes ride better than any around even 2 years ago, so I can't imagine it being crap either... Bike sex!

b26-4-Life (Sep 17, 2015 at 9:16)
That leverage curve is relying on new big-negative-air cans to make it work. I think the early regressive bit is the worst thing about VPP bikes, not worth advertising. Also with High volume cans readily available the regressive ending bit seems quite pointless. There doesn't seem to be much compelling reason for new companies not to use FSR now. Also that's pretty similar to Foes' leverage curve except for without the net progressivity. Awesome though that they're doing carbon in the states.

somismtb (Sep 17, 2015 at 1:26)
I'm interested as well, I don't recall ever seeing any other company do this besides maybe liteville but their whole setup has many variables.

dingus (Sep 17, 2015 at 2:57)
The only reason I could think of is that it would keep the Front-Centre measurement from getting too long. It is a bit odd though.

sewer-rat (Sep 17, 2015 at 3:26)
just seems weird giving the smaller rider the slacker head angle. You would think the larger burlier riders would gain more benefit from it

MojoMaujer (Sep 17, 2015 at 4:53)
It is the other way around... Small frames have slacker head and steeper seat angle to prevent pedal strike and preserve rider position. But in this case, I have no idea.

phobospwns (Sep 17, 2015 at 5:19)
Larger frame with the same HT angle could make the wheelbase too long? Might be to maintain the WB.

phobospwns (Sep 17, 2015 at 5:14)
I know that guy, from when I lived in Austin! When I visited his shop back in '10, he had Pepper playing as he was working- so I knew he'd be mint- which he was. It's awesome to see his stuff on Pinkbike, esp since I don't live in that town anymore.

BeRudeNot2 (Sep 16, 2015 at 23:07)
Hehe Specialised Stumphumper. Is that because of the bottom bracket height?

xCri (Sep 16, 2015 at 23:39)
Unless you're riding like a total pussy a bike that doesn't ramp up at the end is just going to bottom out all day long and break itself. And making the head angle steeper for the bigger size frames is ridiculous too. So congratulations guys. Sounds like crap.

madmon (Sep 17, 2015 at 8:43)
$5,000.00 Canadian dollars after you count the taxes and currency exchange for A FRAME made in the USA.
Not a chance in hell.
I would buy a plethora of frames that will blow this UNTESTED BY TIME ride out of the wata.

gnarbar (Sep 17, 2015 at 7:27)
thanks it's good to know the current Nepalese design aesthetic it will help tremendously with global mountain bike marketing

theminsta (Sep 16, 2015 at 22:55)
I'd love to see this bike with a better paintjob, as my impression on this frame isn't too great with the cheapo two-tone design.