Join Pinkbike  Login
Mountain bike racing has included women at the highest levels since the inception of the sport. Such was not the case, however, with BMX. During its heyday in the early 1980s, women competed in the Powder Puff class - a derogatory term borrowed from motorcycle competition, where women's races were staged as a sort of half-time entertainment while sausage-bearing speedsters prepared for their main events.

BMX feigned encouragement for female racers by allowing them to compete all the way up to the Nationals, but federations did not include them in their national points ranking systems, nor did they offer a pro class for women. Think about that for a moment. 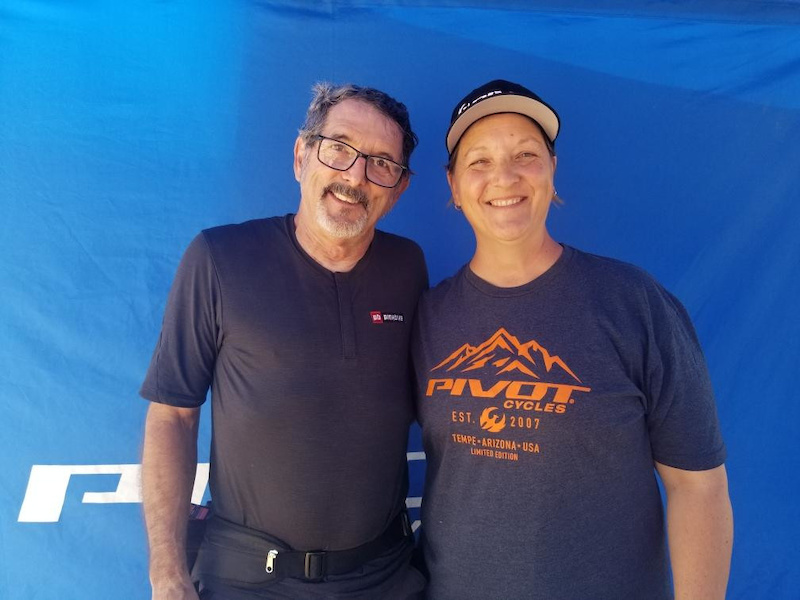 I met Debbi Kalsow at a NICA cross-country race in Prescott, Arizona, where Kalsow was busy preparing for the onslaught of high-school athletes who stop by the Pivot Cycles Chill Zone after crossing the finish line for food, refreshments and to trade stories. NICA events are staffed almost entirely by volunteers (Pivot founder Chris Cocalis "volunteered" me to ride sweep for the Freshman and Junior Varsity races), so it would be easy to assume that this kind-hearted 52-year-old with a youthful smile was a race-mom who was doing her part for the cause.

She is all of that, but not by textbook definitions. Five years ago, Kalsow founded the Tuff Girlz BMX team, which sponsors over a hundred young women in four countries. Those are her kids now. And, there's a good chance that she'd still be here supporting NICA's high-school league XC races even if she weren't paid to do so as a member of Pivot's marketing department. Racing is in her blood, I would soon discover, and this was all about giving back.

Debbi announced to her parents that she wanted to race BMX alongside her brother when she was ten years old. At the time, her father, Dennis Kalsow, was a member of the NBL (a prominent BMX 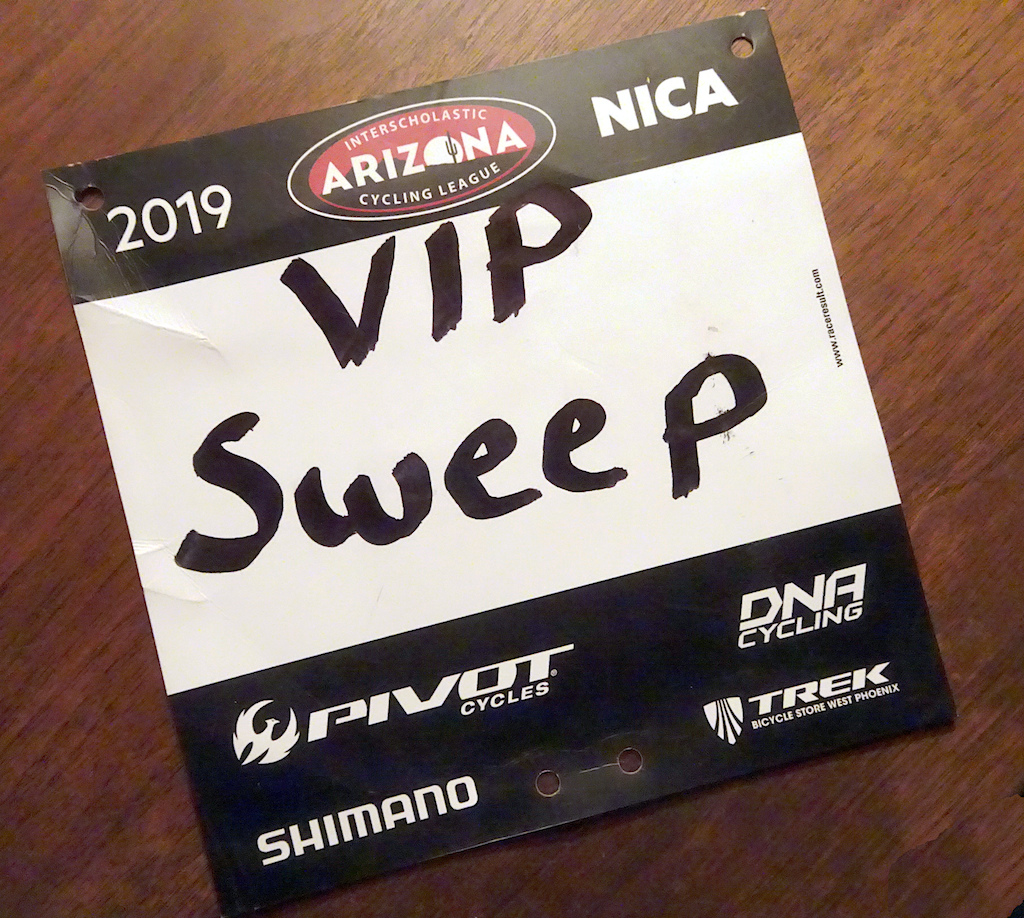 federation in the Eastern USA) who built the first BMX track in Lansing, Michigan, so he couldn't refuse. Debbi turned out to be a natural, eventually becoming one of the top Powder Puff competitors in the country. By 1980, the Kalsows had moved to Arizona, where the family built a four-track BMX empire in the Phoenix area. Dad prepared the tracks and did the announcing. Mom ran the concession stands, and Debbi raced.

Google Debbi Kalsow and you'll discover that she won all the big races that were available to women and wore the number one plate for all four of the BMX federations in the USA during a meteoric career that ended abruptly in 1985. She was inducted into the National BMX Hall of Fame in 2018. Watch the induction video and you'll learn that Debbi argued successfully with the federations to establish a national points series and a number one plate for female competitors - things previously reserved for men only. Search further and you might find an entry that reads: "Professional - No professional career." 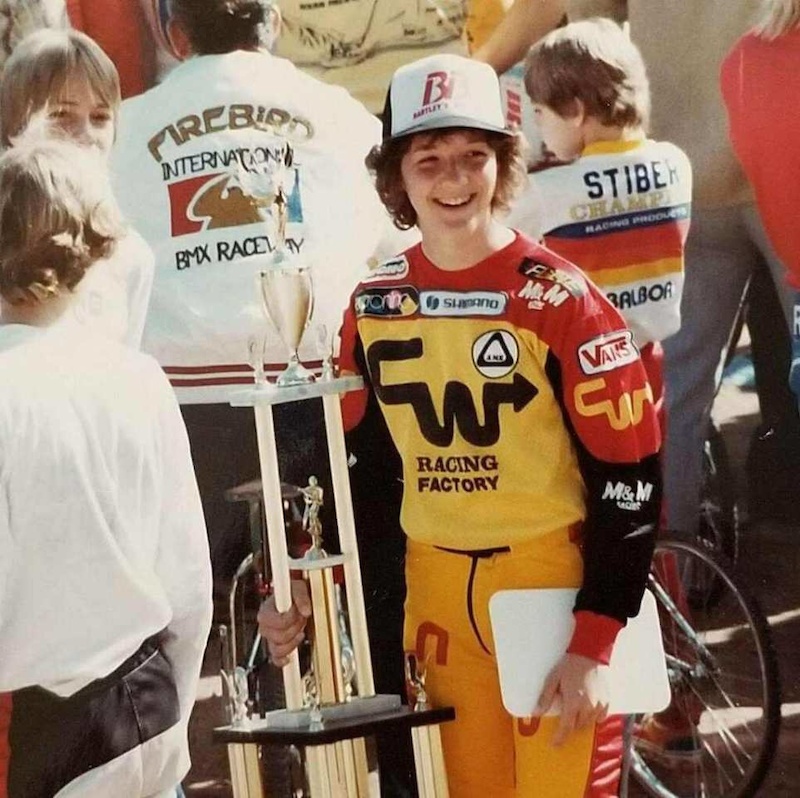 Kalsow doesn't dwell in the past, so it took a while to learn the back story. "We could race the Nationals and Grand Nationals, but there were no points - no number one plate for girls." says Kalsow. "The points series was for the boys only. That's how you got the plate. I could complain all I wanted, but I was just a teenage girl. Nobody was going to care what I had to say."

BMX at the time, didn't even bother to segregate female competitors beyond age groups. Boys could graduate to the expert class and eventually turn pro. Girls were, um, girls. Debbi's knight in shining armor was her dad, then a key member of the ABA. Dennis marched Debbi's demands for fair and equal treatment to the BMX federations, and in 1982, the ABA was the first to expand their series to include women. Kalsow won it and went on to earn the coveted number plate from the NBA, NBL and USBA as the remaining federations followed suit. On the heels of her success, "Powder Puff" disappeared from official nomenclature.

Debbi Kalsow's last entry in the record books is the 1984 7UP 15 and over Girls World Champion. Not officially recognized by the UCI (which waited until 1996 to grant BMX the rainbow jersey), the rebadged Jag BMX World Championships was the last prestigious title that Kalsow earned before she smashed head first into her sport's glass ceiling. There was no turning pro for women. The unspoken truth was that Kalsow could hover in the amateur division indefinitely, or she could seek employment elsewhere. 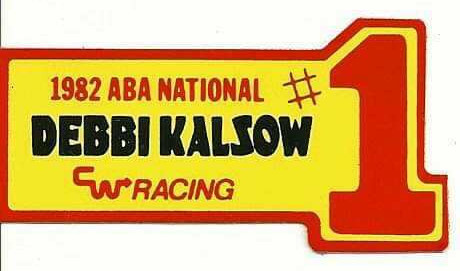 Kalsow left that final battle for other female racers to fight, and in 1985, the promising 17-year old walked away from the sport at the top of her game, got a job, found a husband, raised two children, and didn't look back for over 30 years.

"An old friend of mine from the racing days found me on Facebook," said Kalsow. "He insisted that BMX had changed for the better. He said the tracks in San Diego had classes for adults and kept urging me to try at least one race. He wouldn't take 'no' for an answer and vowed to send me a cruiser class race bike - which he did..."

The ploy was successful. Kalsow returned from the track supercharged, and immediately sketched out a plan to encourage more young women to come to the party, Within a year, her Tuff Girlz BMX team was raging and not too long after, Kalsow was searching the web for a job in the bicycle industry.

Kalsow paused for a panorama of the NICA race, which was now in full swing. Prescott's largest outdoor sports facility was overflowing with tents, Sprinter vans and RV's. Hundreds of teenage competitors from all walks of life were either huffing their bikes around the course or shoulder to shoulder, cheering their contemporaries onwards. Everyone here was family or friend - just like the early days of BMX, I imagined. 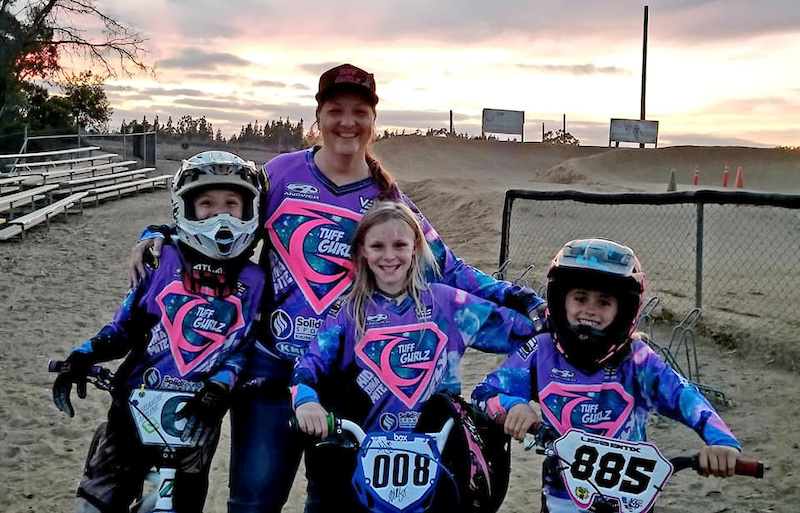 There were many more questions, but Pivot's NICA sanctuary is adult free. Shouts and bells announced the first wave of Varsity girls were screaming past the finish line and I, along with the younger men occupying the shade, were quickly ushered out of the Chill Zone. Debbi's kids had arrived.

enger (Oct 5, 2019 at 6:42)
I raced BMX in the early 80's and remember her kicking butt. Not a lot of girls raced back then, nice to see things evolve in a positive way. Nice job RC digging this up.

intensemack10 (Oct 5, 2019 at 9:09)
RC! I know youre a crusty old journo accustomed to writing (said with much love and sarcasm), but this would make a fantastic podcast. I bet we would get deeper info and be able to hear it in her own voice. I guess we'll have to leave it up to Vital........

ratedgg13 (Oct 5, 2019 at 14:18)
A pinkbike podcast would be great. Especially if it could be like a 30 min weekly Update on all the news with occasional special topics and interviews. Would be perfect to listen to on my way to work.

RichardCunningham Mod Plus (Oct 5, 2019 at 18:08)
@intensemack10: We are currently working out the details for future PB podcasts

oli-paton (Oct 6, 2019 at 12:17)
@RichardCunningham: Always delivering the goods, thankyou for bringing this into the spotlight.

VanDork (Oct 7, 2019 at 2:56)
@RichardCunningham: would love to hear it! Probably worth putting up on youtube to help it pay for itself too

FarmerJohn (Oct 7, 2019 at 22:40)
Indeed we have come a long way in our sport but then I read the stupid comments about the Stans Dart tire plug and feel like we keep taking big steps backward

NickBit (Oct 5, 2019 at 17:17)
I love it when pickbike posts awesome, in depth articles about our sport. I know that it’s an investment that won’t pay in add revenue or clicks but we are all better for it!

olson44 (Oct 5, 2019 at 8:50)
As the proud father of 2 little girls, really thankful to the efforts to empower kids in a way that didn’t exist only a few years ago. Super glad to read this story.

slope (Oct 5, 2019 at 6:47)
Man,I raced back in the day in the late 70's. I don't ever remember seeing a girl racer. Didn't think anything about it at the time. Weird looking back. We certainly have come a long way though.

ATV25 (Oct 5, 2019 at 7:05)
Racing in the early '80s was awesome ! We had girls racing ( my girlfriend included ) with the boys and no one ever thought different of it. I think it was around '81 or '82 when they started separating the girls into their own classes at our local tracks.

pinnityafairy (Oct 5, 2019 at 7:58)
Equal rides for all. I used to race back in the day in the same scenario. The girl that used to kick the guys but was named Mandy. You would not believe the look on the faces of the other boys when she took her helmet off and they realized she wasn't just one of the guys. Priceless Memories. That girl used to throw a meaner tabletop on her Factory cycle craft than most of the guys.

flipoffthemonkeys (Oct 5, 2019 at 11:09)
THANKS RC, back in the 70's one of my neighbors was Tracy Evans. as a grade schooler she was kicking boys ass in MX. made an appearance on the mike douglas show. she was only racing against the boys because there were no races for girls.

lancifer (Oct 5, 2019 at 15:35)
Yes! All of the Above!!!!! EVERYONE should hit your local BMX track@least once a month, even if you have never been before! Think of all those new skills just waiting to be honed, or sharpened! Go at your own pace if your new, look for a track rat to learn a few basics (Gates, Track rules), maybe a clinic if jumping's not comfortable unless your lookin' to race it up! I guess I just don't think BMX Racing gets enough props! Plus, some of the COOLEST people I have ever met I met at a BMX track. Now the problem you might experience is how DANG fast some of these "Tuff Girls" are on the track! I love seeing the looks when "dudes" get beat by a young lady...awesome!

Sshredder (Oct 5, 2019 at 11:14)
Times have changed . For the better. Thanks for the positive and enlightening story RC.

Yaan (Oct 5, 2019 at 14:53)
Great article RC. For those looking to get girls into mountain bike racing in the PNW, Kat Sweet is doing fantastic work. Check out Sweetlines, your girls will thank you.

50percentsure (Oct 5, 2019 at 18:51)
My daughter had a fierce pack of little girls to ride with at the local track. Pigtails poking out under helmets and all the pink gear. Hats off to Debbie and the other OG pioneers that got us to where we are today.

Unkas (Oct 5, 2019 at 9:15)
Thank you for sharing this precious piece of cycling history with us! More articles like this.

simeon10 (Oct 5, 2019 at 10:48)
Great story, brought the days back. I rode in the early eighties, there were girls at the races, but I'm not sure if they even let them race, we've come along way since then. Me and my friends went sometimes to race but usually to do tricks and ride the tables and jumps after the races had finished. Great days, those CW and Ame logo's! it was in another life..

BetterRide (Oct 5, 2019 at 10:26)
Great read. Love to hear about people encouraging others to ride bikes. Even better when there is an equally interesting backstory.

fattyheadshok (Oct 6, 2019 at 2:52)
Love that history that you always bring to the table RC. You’re definitely an asset to the whole MTB world.