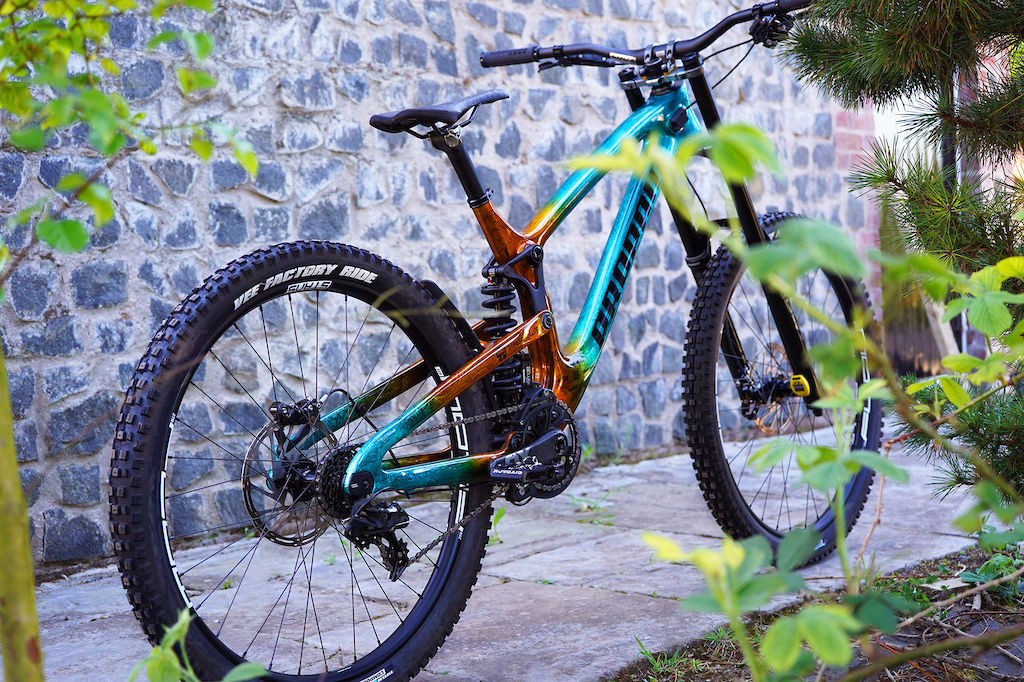 In honor of the Propain Factory team's paint roller sponsor RS Farbroller we decided for the 2020 season we would get creative with three of George's World Cup race bikes introducing them at different points in the season. Here we have the machine George would have been racing for Lousa, Maribor and Lošinj, World Cups 1, 2 and 3. We thought we might as well show it to you guys now cause it's just too sexy to be hiding away until September! Paintjob by: 70.id 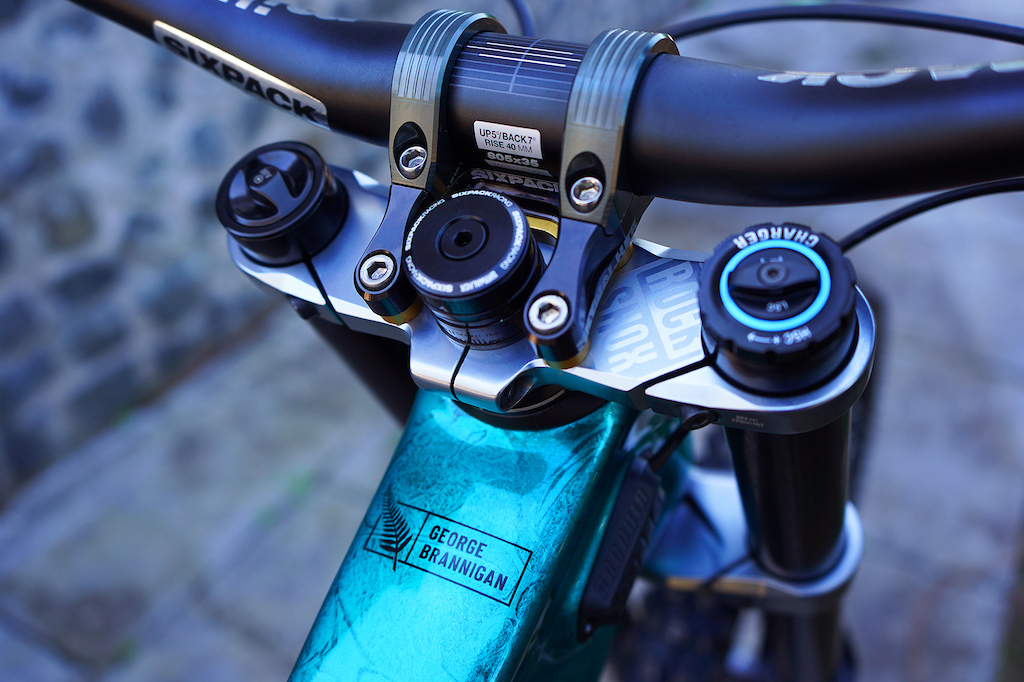 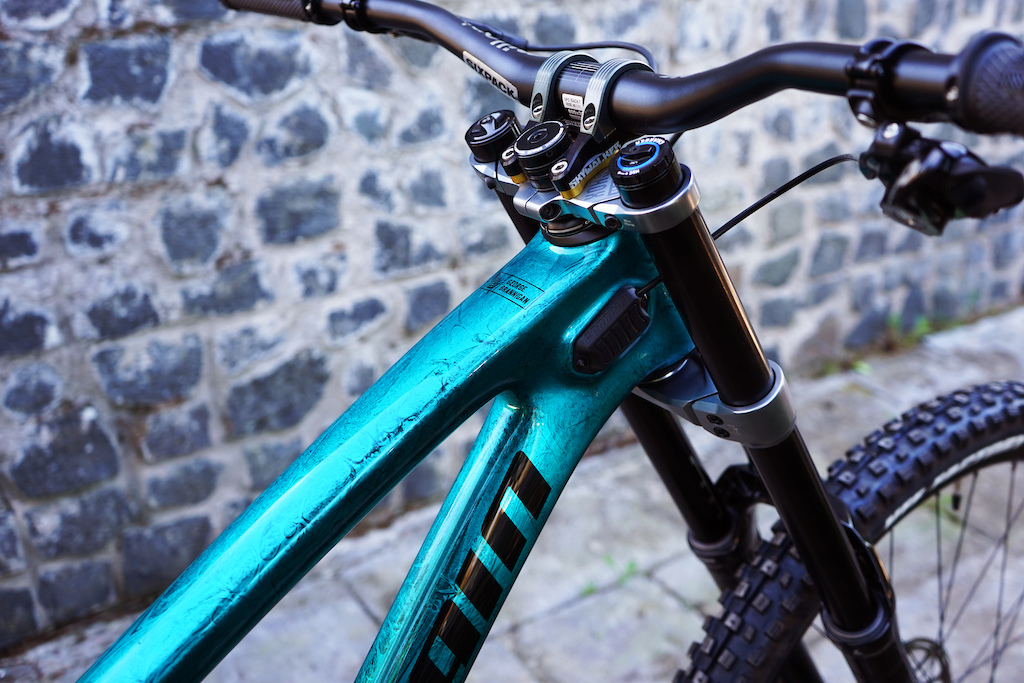 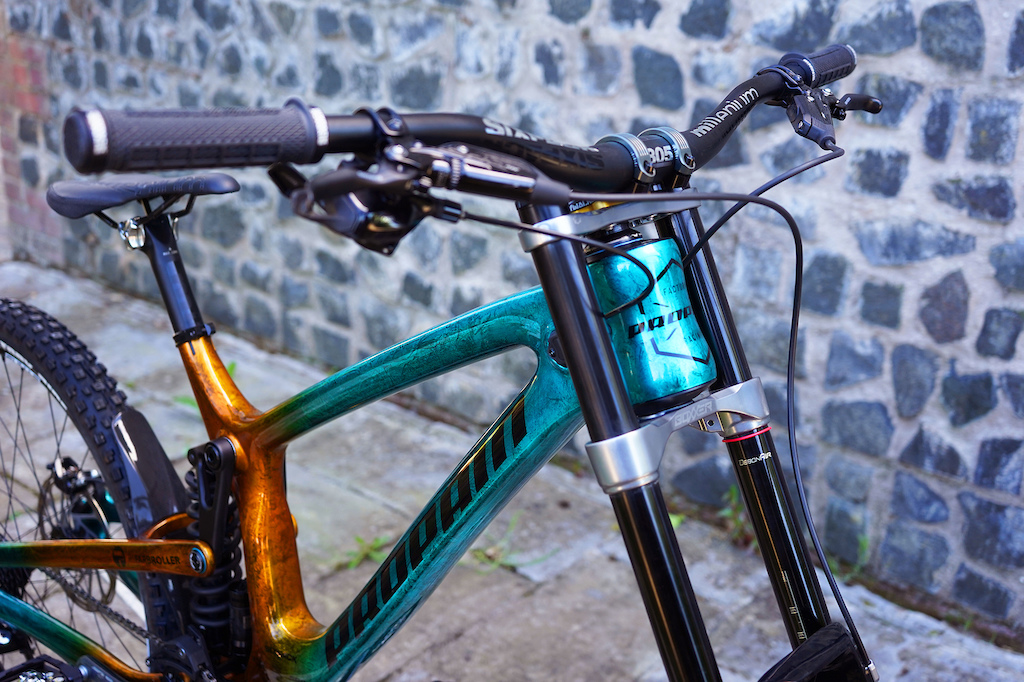 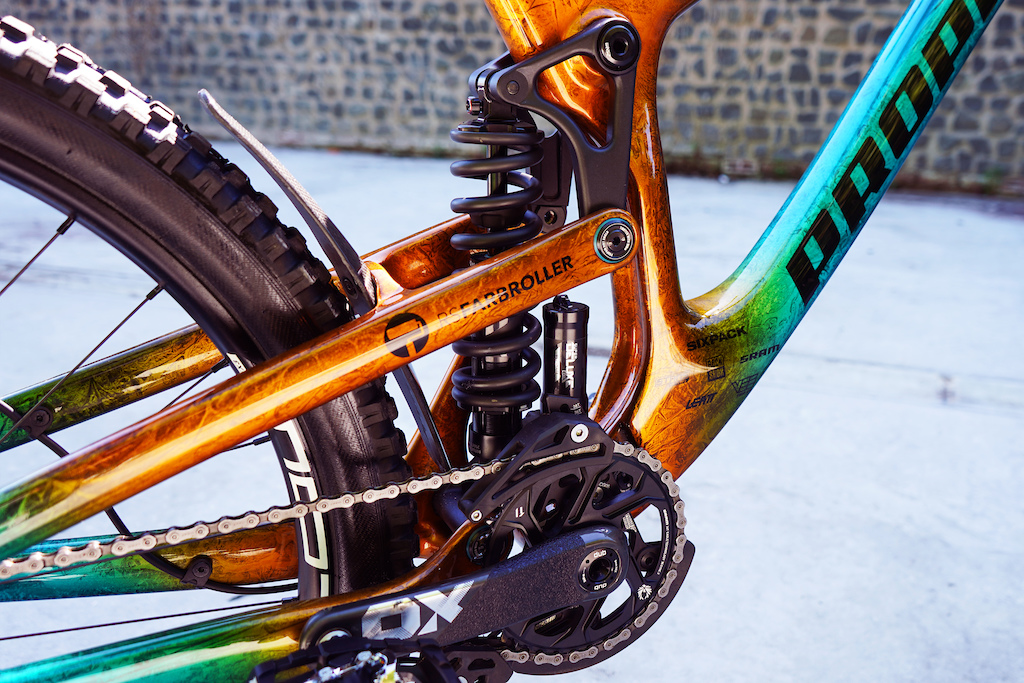 The bike has been setup to match George practice bike so it's pretty much good to go when he can get back to Europe, wherever that might be. Other than the stunning paint and prototype tires from Vee these are all off the shelf parts which anyone can go out and buy. 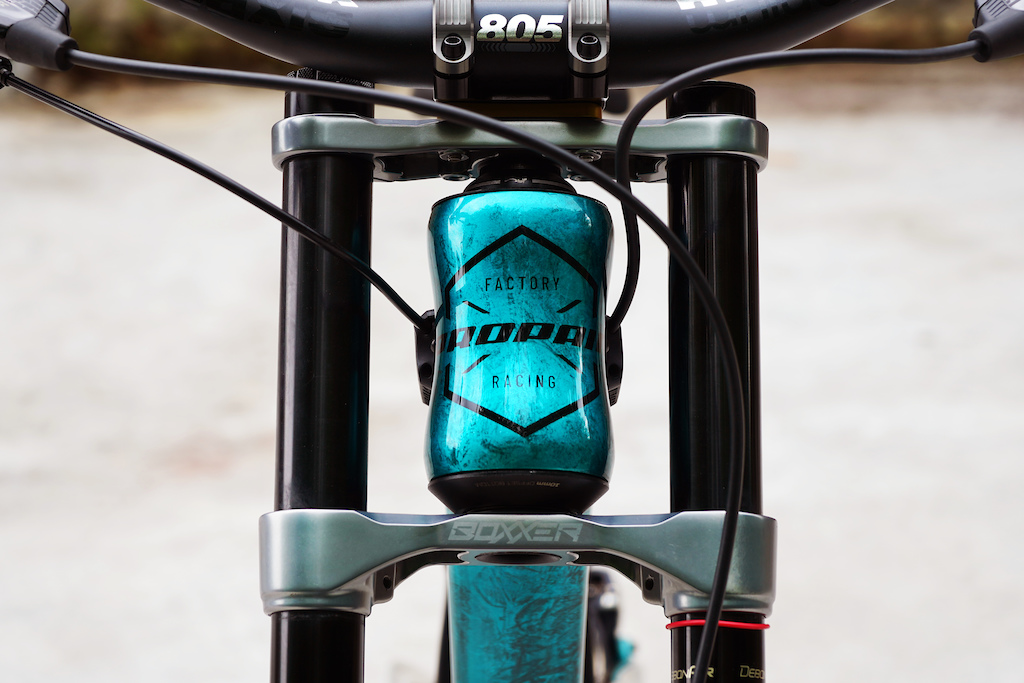 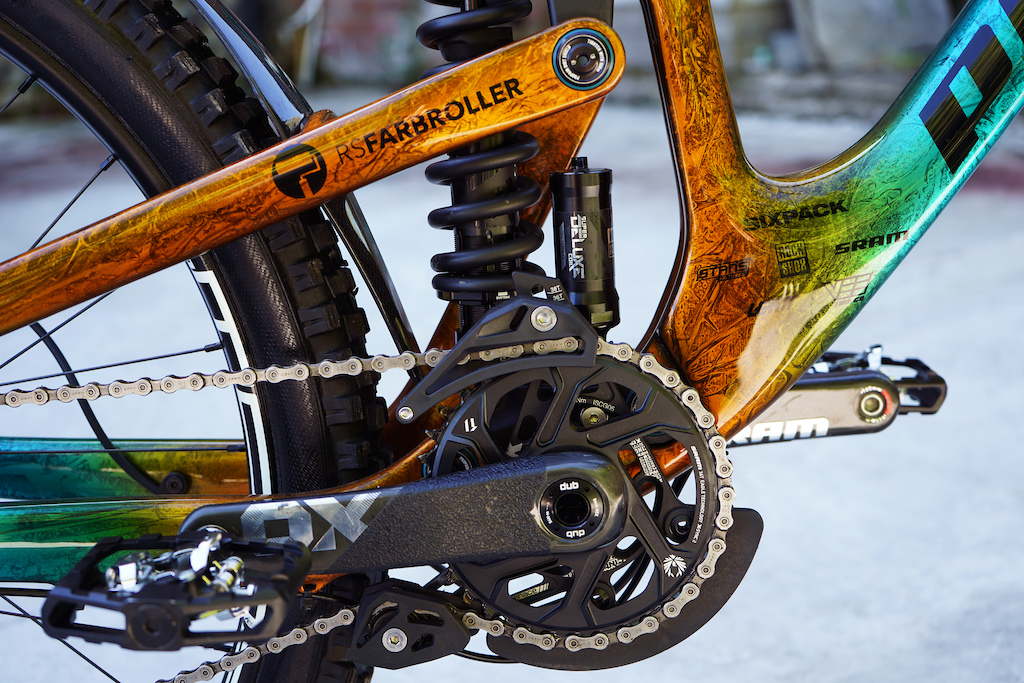 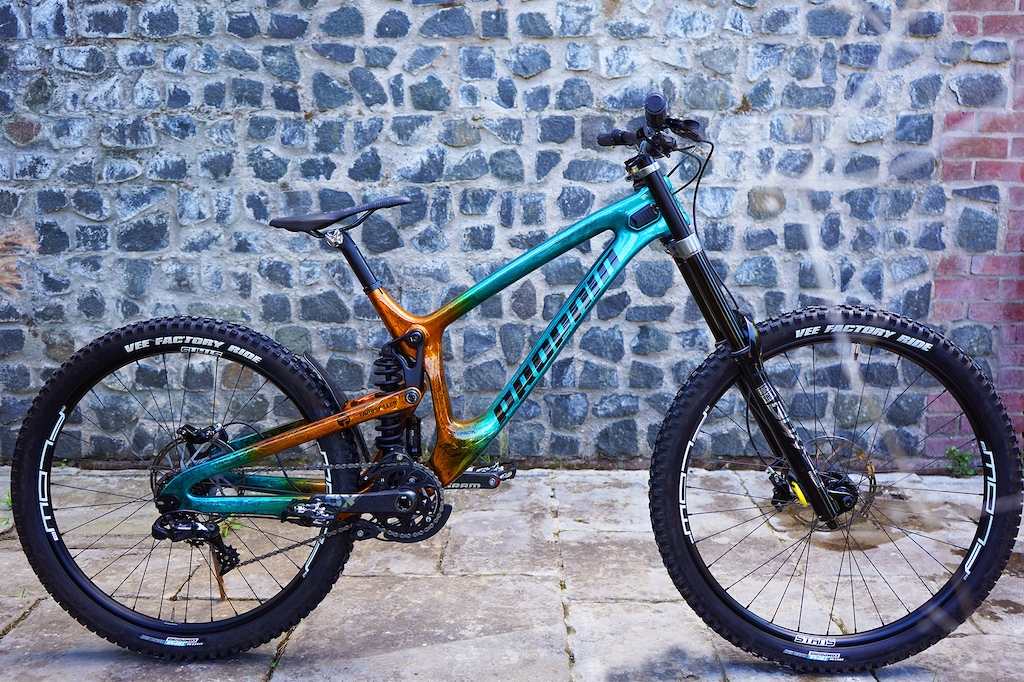 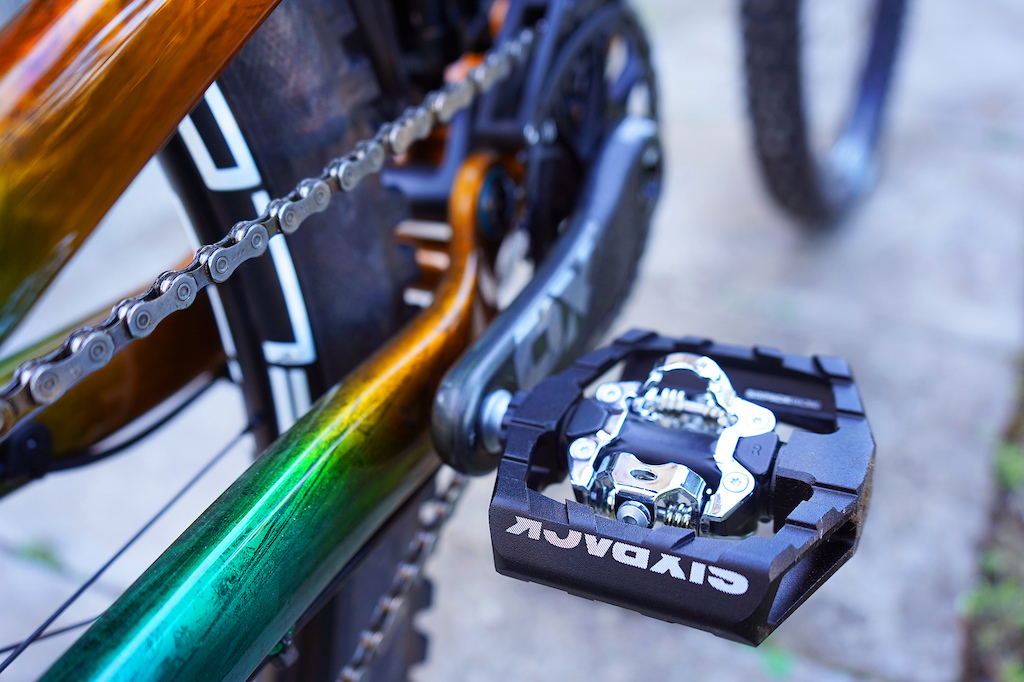 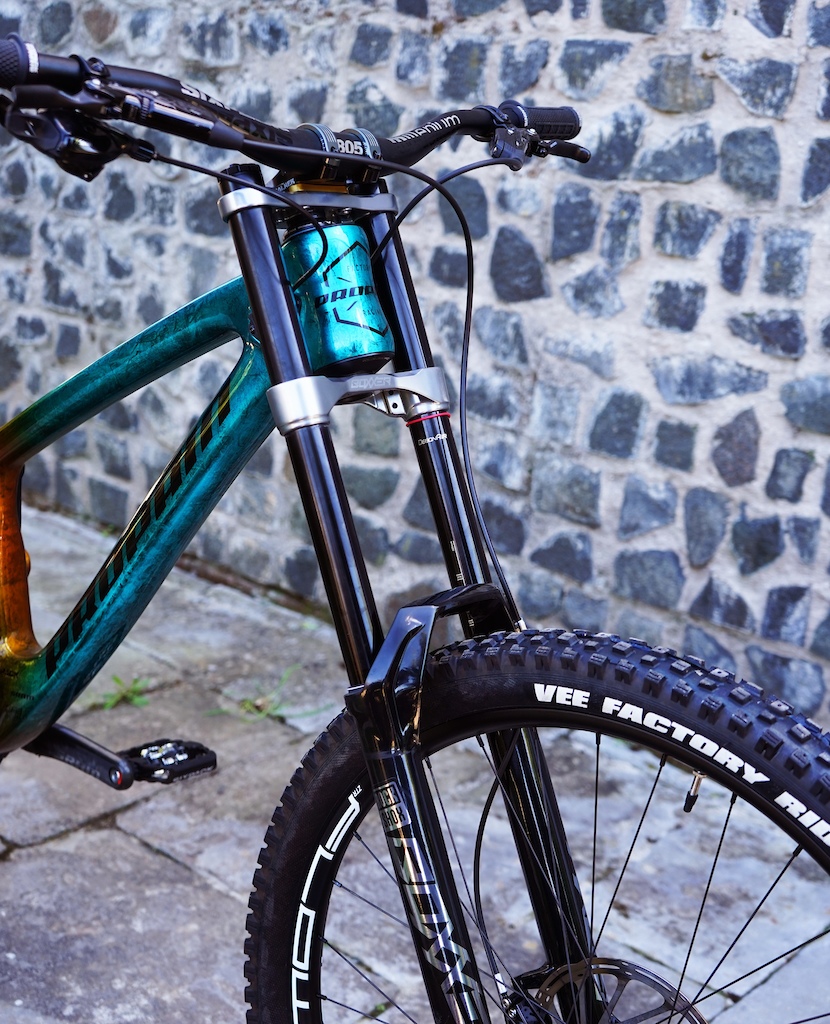 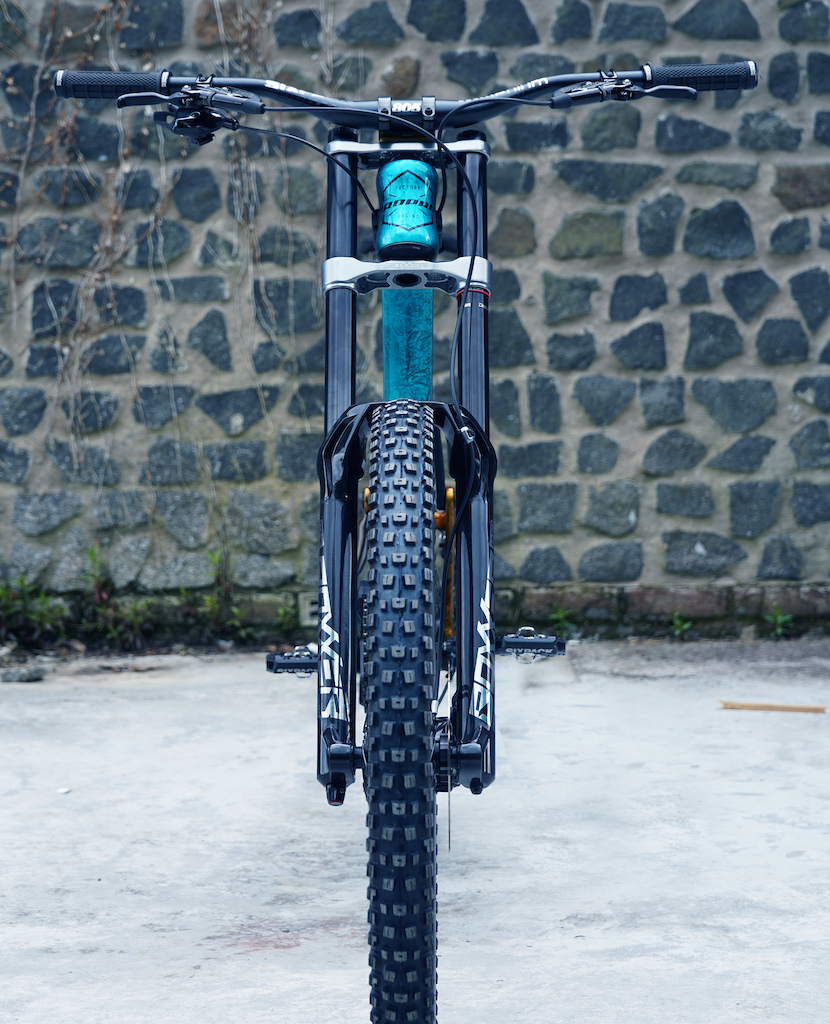 Check out the spec below:

DaFreerider44 (May 20, 2020 at 9:58)
@jomacba: prolly one of the few bikes that look better than this are the custom painted DJ and slopestyle bikes like Brett Rheeder's Kashima bike, but that's just my opinion.

jomacba (May 20, 2020 at 15:12)
@RowdyAirTime: I think ebikes are brilliant. But I also think they have quite a bit of room for improvement

Shredtheduck (May 20, 2020 at 8:07)
That is so sick. Its like those colours of mineral deposits you get around a geothermal vent or something. Unreal.

Not seen much about those pedals, anyone used them?

southoftheborder (May 20, 2020 at 10:54)
Came straight to the comments as they weren't listed in the bike check. I can't even find them in Sixpack's site. And they have the pivoting cage I came to love in the old Shimano 636s or VP's 133-DHs.

stiingya (May 20, 2020 at 11:39)
@southoftheborder: think it has spring tension to keep the cleat/clip part of the petal angled up above the cage for ease of insertion? that would be cool...

SIXPACK-Racing-GmbH (May 20, 2020 at 12:29)
@southoftheborder: those pedals are our team prototypes and will be available in our online shop in the future.

southoftheborder (May 20, 2020 at 15:43)
@stiingya: yup, exactly the same way the pedals I mentioned in my previous comment. Works wonders when you are in a hurry to clip in.

Veloscente (May 20, 2020 at 20:28)
@Shredtheduck - All the upvotes, that's exactly what it looks like! Burnt orange & electric blue are my fav colors: the way they blended / transitioned these colors is so utterly fantastic that I'm seriously considering stealing this idea & custom painting my next frame!

rickybobby18 (May 20, 2020 at 8:58)
Sooo pretty, but also, looks like a blue bike ridden by someone with uncontrollable diarrhea.

freestyIAM (May 20, 2020 at 9:09)
those Vee proto's look like another nice addition to the MM Assegai style of tires.

rickybobby18 (May 20, 2020 at 12:03)
Those look like prototype Vee tires (saw on Vital). Looks like they took Assegai center tread and DHF side knobs. I was wondering how long it would take before the Assegai clones started.

skeeple (May 20, 2020 at 8:00)
I definitely used the wrong brand paint roller in my kitchen - doesn't look anywhere near that good

rocky-mtn-gman (May 20, 2020 at 7:59)
They already cancelled the re-scheduled Fall races that were announced last week?

danielshiels (May 20, 2020 at 8:32)
Something about that frame, even without the sensational paint

Ajorda (May 20, 2020 at 8:44)
Love that paint, but the rear shock placement still freaks me out.Get a rock in the wrong spot and suddenly you're out looking for a brand new shock.

jason475 (May 20, 2020 at 15:19)
It is a sick paint job, i agree, but you would have nothing to worry about with the rear shock placement. I wish more bikes came that way. Dirt bikes have been set up that way forever, and there is way more going on back there with a dirt bike , compared to a mtb. But than again , the Cannondale Lefty thing still freaks me out.

Mondbiker (May 20, 2020 at 12:51)
well, kind off, just spelled differently. FCK flats. It´s just another overpriced product from Marshy, total cost of making exact copy is like 5quids, so why not ask 30. That´s healthy profit for sure, almost as good as selling rebranded mastic tape.
Below threshold threads are hidden

keen515 (May 20, 2020 at 8:52)
Interesting marketing plan for a company that doesn't sell to consumers. Are the executives from Purdy, Wooster, and Wagner big DH fans?

youknowitsus (May 20, 2020 at 7:48)
A custom-painted bike per race lolol wut a wasteful flossy douchebag.

Ajorda (May 20, 2020 at 8:43)
It's almost like he is a sponsored racer with a factory team capable of producing multiple frames for him for a season.

youknowitsus (May 20, 2020 at 9:02) (Below Threshold)
@rbarbier12: "so to have three in one season is pretty special." Read again my dude. It's ostentatious and I cannot support. Grade-A Douchebaggery. Similar to all those who downvoted me and also those who commented negatively to my truthful comment.

rbarbier12 (May 20, 2020 at 10:12)
@youknowitsus: Ahh fair my bad. I don't know. Maybe the custom frames are a bit over the top, but for a lot of these riders, they get new frames every several races in order to have clean setups. At the end of the day, factory teams are advertisements for the bike brands. If they can make the bikes a bit more special, it helps with the marketing effort to sell more bikes and promote the brand.

MaplePanda (May 20, 2020 at 13:50)
I don't see what's wrong with that. Heck, he could have a whole new bike every race and I would support him if it made him go faster and his team could afford it.
Post a Comment