Getting to Know Chelsea Kimball, the Free Spirit Who Sent Big Jumps at Freeride Fiesta 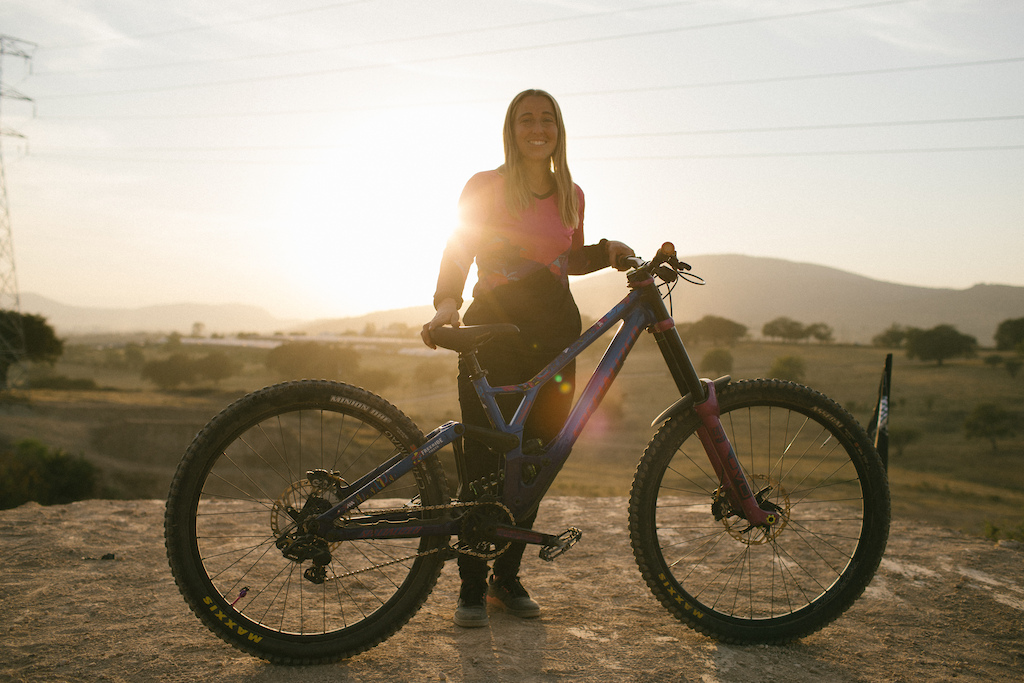 Photo: Valentin Popineau
Chelsea Kimball can do it all. She races downhill, competes in slopestyle, and travels around the Western US and beyond in pursuit of adventure. She hits events like the 2019 Crankworx Speed and Style in Whistler (the first Speed and Style to include women), the infamous TDS Enduro, the International Chiang Mai Enduro in Thailand, and most recently Freeride Fiesta, where she threw down with the best of them.

Chelsea is also an arborist who once spent a week climbing a giant sequoia tree, a desert lover who spends her winters riding freeride lines in Virgin, UT, and someone who lives life about as fully as anyone can.

Who is Chelsea Kimball?

I'm a girl who thrives on adventure, and loves to travel and ride bikes!

I was born and raised in Mesa, AZ. These days you can find me in Virgin, UT in the winter and in some mountains near you in the summer.

How did you start mountain biking?

The first time I ever even heard the term "mountain bike" was in 2012 when I decided to hitchhike from Arizona to my grandparents' house in Kansas for Christmas. The first person to pick me up explained to me he was heading out to ride his bike on some trails in Gold Canyon. I was a bit mystified about the idea of riding a bike on a trail but didn't think much of it at the time. It was the following year that I actually tried it for the first time. My friend had recently moved to Big Bear, CA, for rock climbing but found herself a job at the local bike shop. She instantly fell in love with mountain biking and over a few months my climbing partner became a mountain biker. She was eager to introduce me to the sport and said she would let me use her old bike once her new one arrived. After explaining many times that I wasn't interested in pedaling a bike up a hill, her persistence paid off and I finally agreed to try. I remember the trail being so steep and full of turns with a few root sections, it was a blast! Back then I had some big goals in rock climbing so most of my time was spent clinging to cliffs but slowly I rode more and more.

Are there skills that you learned from rock climbing that have helped you in mountain biking?

Rock climbing promotes great core and upper body strength, I think that helped me a ton when I started riding. Even now I would much rather go to a rock climbing gym to work out, it's really fun and in my opinion, the best way to prevent arm pump on a bike!

Who are your sponsors?

What bike(s) do you ride?

My favorite bike right now is my Specialized Demo, I love DH bikes so much! For trail riding I have a Specialized Enduro 29er and I also spend a bit of time on my dirt jumper and maybe a little less time on my road bike.

Around this time of year I may wake up and make some coffee then head outside and check the day's wind forecast. If the wind is good I'll generally find something to ride in Virgin and if it's a bit gusty I'll either go ride my trail bike or head to the bike park. The evening is when I like to get work done, it gets cold and dark pretty early so I take refuge in the local coffee shop. 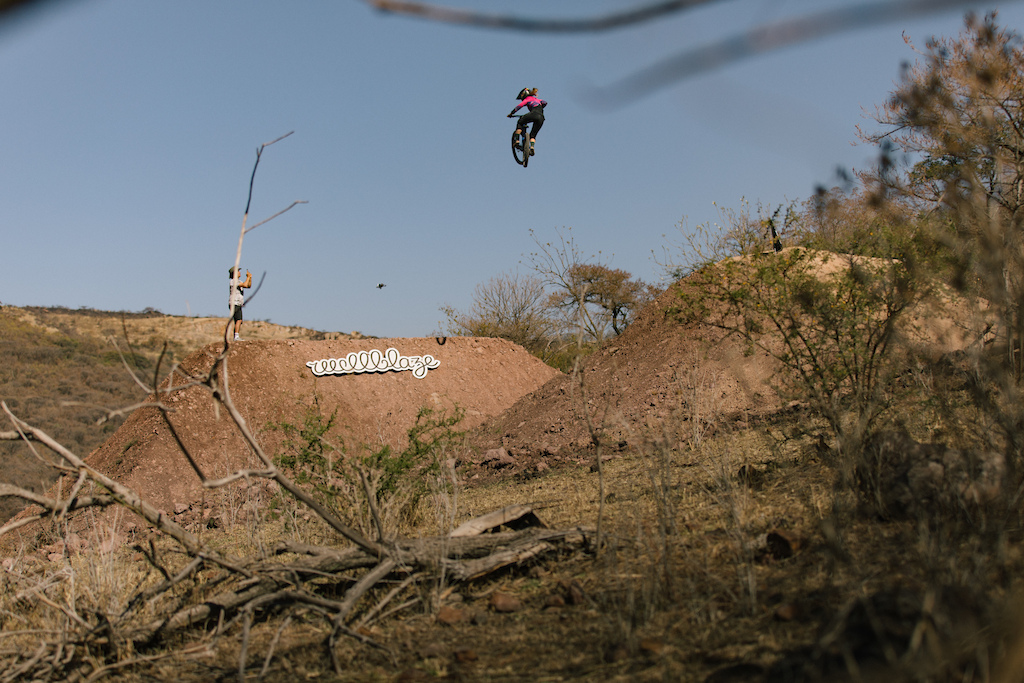 What riding accomplishments are you most proud of?

Well, I'm sitting in a hotel in Mexico right now because of the most epic experience I have ever had on a bike. Freeride Fiesta was almost a week of hitting the biggest jumps of my life with amazing riders from all over the world. I feel so lucky to be a part of such an awesome event!

How was Freeride Fiesta?

Freeride Fiesta was awesome! I came down here to Guadalajara with my boyfriend Ryan Rodriguez and before the event started we went to check out the jumps. It is a line of 7 features: a step down, road gap, hip, another step down (Speedy Gonzales), ramp jump, drop, and step up. It was a bit nerve wracking before dropping in the first time. My bike felt like a hardtail with suspension that barely moved when I bounced on it and the only warm up to the jumps is the 40ft of roll-in before the first step down. For me the most difficult jump was the hip. With such a big lip it is pretty blind and quite easy to carve too much off the lip and land too far down the landing. There is definitely an art to boosting big hips. The drop was intimidating but after a few run-ins Peter Salido towed me in and it felt great! The line flowed very nicely with almost no need for braking or pedaling anywhere, quite the feat for the first year of a big jump line.

Peter Salido tows Chelsea into the big drop in the second slide.

What was it like to ride down King Kong? Some say you were the first known woman to ride that line.

I really can't claim that title, there are a few ladies that did it a while before I did. Just to ride down King Kong though? Once you get comfy on Kong it is a really fun line, each feature is pretty exciting and the more flat ridge sections in between are super flowy and fun!

I'd say drops, jumps and super techy riding are some of my strengths.

What’s the best part of being a traveling freerider?

Riding new spots all the time is one of my favorite things, the people I get to meet and ride with make each spot really unique and fun.

What’s the hardest part of being a traveling freerider?

Especially in winter and during Covid finding a place to shower can prove to be difficult.

Where is your favorite place to ride?

I'm not sure if it was actually the worst but at Big White Slopestyle in 2019 I looped out on a backflip on my second run. I tweaked my shoulder quite a bit but the funniest part was the impact to my butt. A week later I had to get a massive hematoma drained, the poor doctor took almost 500cc of liquid out of my butt cheek!

I'm pretty lucky to have a few girls that are really close friends that all love to freeride. Each of us has our own goals and it's so cool to see each other progress and take on challenges in our own ways. 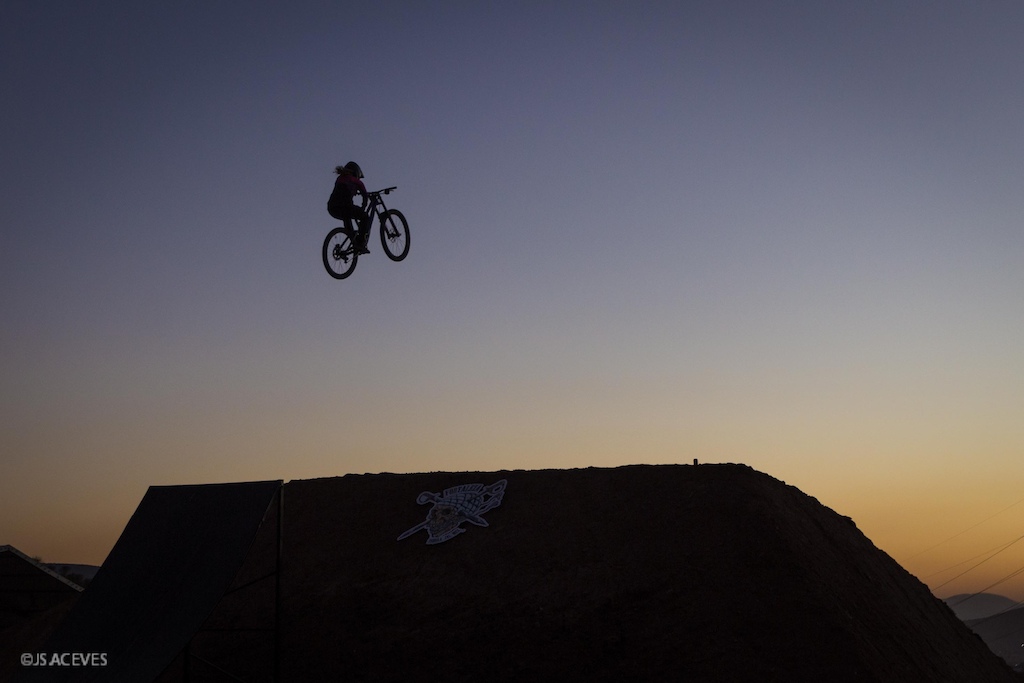 Sunshine, friends and everyone is going to kill me for saying this but I LOVE Dr Pepper, it's so good!!!

What do you enjoy doing away from biking?

"When the going gets tough, the tough get going."

What opportunities would you like to see for women in freeride in the future?

I would really love to see more competitions, and media opportunities. On a more grassroots level it would be awesome to see more programs like Kat Sweet's Sweetlines Racing up in Seattle, she has the best development program for girls in the whole country. More and more women are getting into freeride all the time and I think we all enjoy watching other ladies ride!

There are lot more things I want to achieve on my bike so I think in a general sense I want to be remembered as a person that loves to ride bikes and always up for an adventure!

What does the future hold for you?

I'm excited to actually have some events happening this year, slopestyle, enduro, DH, and maybe even a trip to Europe! I'm also planning something exciting for 2022 but that announcement will have to wait for now! 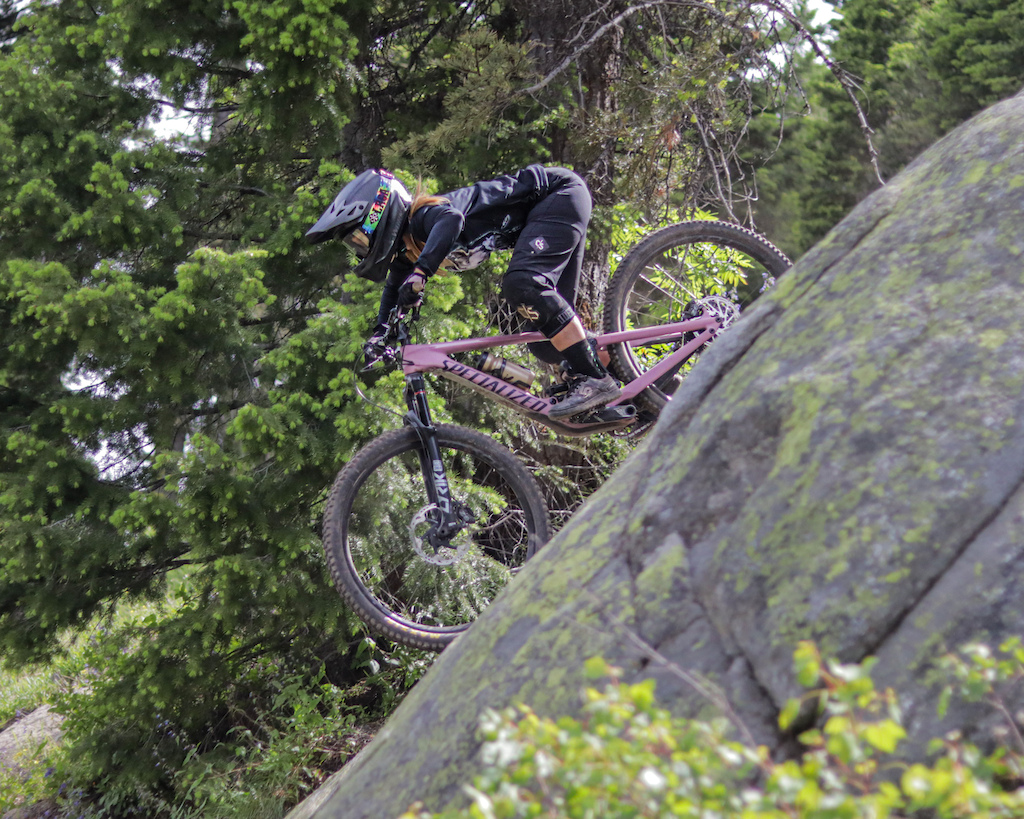 
Posted In:
Interviews Getting To Know Chelsea Kimball

SeligCJ (Feb 11, 2021 at 1:32)
Chelsea is such a badass and even now she's being modest! She's only lived van life for like 8 years in order to go to all these places and do things most people only talk about. Keep sending it, Chels! 3

TombPhoto (Feb 11, 2021 at 1:13)
So cool! Stoked to see more female riders like Casey, CJ and now Chelsea break into the freeride events!

slayerdegnar (Feb 11, 2021 at 9:28)
She absolutely shredded the fuck out of Kong. Most guys creep and skid down it. Going bigger than any other lady out there. So fun to watch. Keep it up!

kayleefish (Feb 11, 2021 at 22:56)
No article or video will ever show how awesome Chelsea really is. It’s just something I’m glad I’ve been able to experience in real life. Always down to work harder and longer than most. Takes care of everyone and anything around her. Shreds hard on a bike and still has real feelings like a real human being...not so hard core that she’s only hard core...some how she balances it out. She’s a pretty inspiring human being that’s a pleasure to be around and get inspired by!!! Recognition for what she’s been doing out in the desert for years has been SO missed! She has hands down ridden more drops/lines/jumps out in Virgin than any other female out there!! That’s what happens when you spend several winters out there and ride it everyday! Keep your eye on this one...she’s going places!!!

stikmanglaspell (Feb 11, 2021 at 9:50)
Read the whole thing and watched the vids, no idea what a boss she is! Thanks for sharing this.

xxsurlyxx (Feb 11, 2021 at 8:14)
Session'd the metal moto kicker at TDS well into the night with Chelsea and crew, such a good time and she rips!

rockchomper (Feb 11, 2021 at 9:28)
If I recall she is a Tree trimmer / arborist 6months out of the year and that provides enough money for her to live in the van for the other 6 months