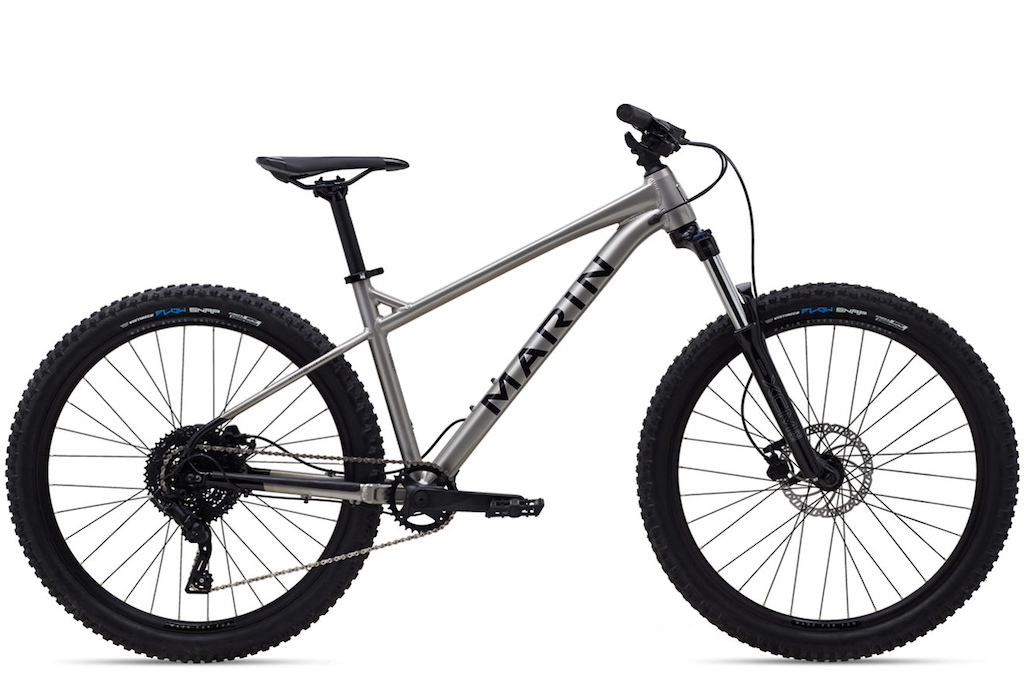 Marin is recalling 20 hardtail models sold between August 2020 and April 2021 due to bottom bracket issues.

The bikes have been recalled due to a bottom bracket fault that can cause it to break during use. The fault can cause a rider to lose control, posing fall and crash hazards to the user.

As of July 22, 2021, the company has received 6 reports of brackets breaking in Canada, 9 in the United States and 6 in the UK. So far, 1 minor injury has been reported due to the fault. Marin reports that 875 units of the affected product were sold in Canada and 2,113 were sold in the United States but figures are not currently available for bikes sold in the UK or EU.

Anyone riding one of the affected models is advised to immediately stop using the recalled bicycle and contact Marin Mountain Bikes to confirm whether their bicycle is affected. Marin will provide a free replacement bottom bracket that will be replaced by an authorized Marin retailer. No other part of the bike is affected.

twonsarelli (Aug 19, 2021 at 8:00)
at least it is the bottom bracket itself and not the shell.. if the frames were breaking, that would be a nightmare

browner (Aug 19, 2021 at 9:30)
To be fair if the frames were breaking you might actually be able to go ahead and get a better bike

twonsarelli (Aug 19, 2021 at 9:43)
@browner: i don't think they'd be swapping out cheap hardtails for higher end bikes and people buying those hardtails probably don't have the budget for a mint build or else they would have gone that way in the first place.

southoftheborder (Aug 19, 2021 at 8:21)
According to the Collins disctionary, it's the change of a vowel into a diphthong.

conoat (Aug 19, 2021 at 9:57) (Below Threshold)
@MmmBones: a Bottom bracket has no spindle!? a BB is just the bearings that sit between the crank assembly(that does have a spindle) and the frame.

robway (Aug 19, 2021 at 11:26)
@conoat: how old are you like twelve? You could learn a lot more about bikes before commenting. Many bottom brackets have a built in spindle.

Notmeatall (Aug 20, 2021 at 4:54)
@conoat: Square tapper. Octalink. These the spindle makes part of the bottom bracket. E thirteen has the spindle as a separated part. Since they said the BB is failing, the bearings could be getting out of the races and the crank becoming terrifyingly wobbly.

HannesBa (Aug 19, 2021 at 10:55)
C'mon Marin, that s a bad joke. Bought a San Quentin last summer and the nightmare started. Replaced the BB three times and thought it was me... One f*ckin year later you come around with this.
Thanks to my local bike shop for fixing this shit.

Macmacmac (Aug 19, 2021 at 11:36)
So you had the BB replaced by the exact same product when it keeps breaking over and over. Well I would not thank that bike shop…

barp (Aug 19, 2021 at 19:47)
Doesn't pretty much any bike from any manufacturer have a 1-year warranty (at least) on everything? I wouldn't be paying to replace defective parts on a new bike.

Glenngineer (Aug 19, 2021 at 8:13)
The retro grouches still like square tapers... I hated those things, as a rider and a mechanic. BB standard complaints are well deserved, but lots of riders have never had to deal with a square taper BB and are better for it.

Square taper's bad reputation comes from cranks that were not torqued to spec in the first place, then came loose, had the interface destroyed by riding loose, which led to people over tightening the cranks onto the spindle which eventually cracks the aluminum cranks as they get pulled further up the taper.

Shimano square taper bbs last a long time and require next to no maintenance.

felimocl (Aug 19, 2021 at 9:15)
Square taper cartridge is quite possibly the best BB design on the market, even potentially better than shimano BSA. Generally the bearings will last for years, cheap af and when they do start to develop play you still get another year out of it before it starts to become an issue

toast2266 (Aug 19, 2021 at 9:28)
@nedD: Counterpoint: Square Taper's bad reputation comes from the fact that they suck. They're heavy, the interface is inherently fussy to install, they're flexy, and I've seen more failures of square taper spindles than any other bottom bracket type (and I'm talking failures of the actual spindle, not the crank arm).

mountainsofsussex (Aug 19, 2021 at 9:43)
They might be a bit heavy, and can get stuck on, or wobbly if loose. But the bearings in those things last so much longer than more modern BBs. Like, forever...

Wheeeliemann (Aug 19, 2021 at 10:33)
@mountainsofsussex:
Yep, riding 12000km with retro brackets vs 3-4000 km with hollowtech is unmistakable proof that modern brackets bearings and/or seals are shit, regardless of road or mtb groupset, or entrance vd high end groups.

Weight and fewer necessary different widths are the sole advantages

robway (Aug 19, 2021 at 11:31)
Not if your hucking to flat, then they just snap. Lot of bad things with the square taper BB. Cheaper bike= new rider= experimenting with hucking+ cases the landing = snap. @nedD:

funkzander (Aug 19, 2021 at 13:22)
@Glenngineer: had to replace the damn square taper bb once a month in the mid 90ies. luckily they were cheap to replace. the skf ones were only 17 bucks or something like that. practicing trials riding was not helping with longevity. glad shimano came out with hollowtech.

dsut4392 (Aug 19, 2021 at 18:41)
@Glenngineer: the initial generation of shimano cartridge BBs in the early 1990s did indeed suck, draggy and the bearings wore out in no time, but subsequent generations of Shimano improved a lot.

The real retro-grouches like square taper BBs with loose bearings and cups that thread directly into the frame. Installed correctly on a properly faced frame, those last forever in road and touring applications - I had the same one (bearings and all) on my 1990 Raleigh technium from new until 2013, and it was still smooth and spun forever when I replaced it. This bike has been my tourer and daily commuter and would have done well over 25000 km in that time. They don't fare that well on MTBs because the bearings are inherently not as well sealed, and once crud gets in it grinds the bearings, and the races and axles get pitted. Plus obviously the axle/crank interface is smaller, so it's more likely to get damaged by hard landings, particularly if not installed to spec.

letsgethurt (Aug 20, 2021 at 5:00)
Sadly news like this is what the future will look like after shimano discontinued the BB-UN55

blazersdad89 (Aug 19, 2021 at 8:24)
Hopefully cranking out some replacements is a snap for them since these are bottom bracket tier bikes.

Imself (Aug 20, 2021 at 0:26)
Hey, there is a lot of winners there.
Do you know any big brand who didn't go for a recall? It's often the case when you sell hundred thousand bikes, especially in the covid period, where nothing is simple. The BB issue is not a drama, and a recall is always a strong message to show that the brand assure a good service and assume his production and, perhaps, his errors.

I bought a Marin in 2017/18 when they were getting all the hype with the hawk hill. I had to strip that entire bike down and redo everything. Nothing was greased, like at all... bone dry. Brand new bike with a corroded bottom headset cup bearing. New frame Bearings needed to be pressed in, some wouldn't even spin. All the bolts had to be removed and installed to torque spec, they were all over tightened. Bolts that were supposed to be torqued to 12nm were bending my hex keys trying to get them out and making loud popping noise, as if they had snapped, when they broke free. Luckily none broke. Derailleur hanger wouldn't stay tight and constantly through the shifting out of wack. Was a nightmare.

This doesn't surprise me at all. I won't ever purchase another Marin Bike again.

Marin's response to my problems was take it back to where I bought it (which was over an hour away) and get the same people who didn't bother checking the bike over at all to redo all the things they should have done in the first place. I opted to do it myself. They wouldn't even send me dropper post grommets...

I've made a lot of stupid purchasing decisions in my day, from a fat bike to a $1500 carbon fiber backpack, Marin is near the top of that list as far as wasting money.

gerhards (Aug 19, 2021 at 7:20)
What bottom bracket is being used that would fail affecting basically every model? Have to imagine other mfrs impacted too.

chacou (Aug 19, 2021 at 7:27)
Probably some super cheap square tapered cartridge BB as these appear to all be entry level hard tails. Likely installed on other budget bike brands as well.

gerhards (Aug 19, 2021 at 7:42)
@chacou: yeah I realized that was a dumb comment immediately after posting. But now that I'm actually awake I can only think of how many of these bikes won't go back for service if buyers at this level don't know what a bottom bracket is/does.

madmon (Aug 19, 2021 at 9:20)
i just googled them all even the trail bike for a grande uses a "Sealed Cartridge Bearings, Square Taper" as listed in spec pages.... again I used one in 2002 on my Santa Cruz Superlight and the creaking sucked the bag

Lumenous1 (Aug 19, 2021 at 16:49)
Dodged that bullet. New lockdown in New Zealand - family rides are the best. My son's San Quentin 24 bought 2 months ago has a different BB. Sick bike with great gear range, decent brakes and tunable fork for his mass.

nzandyb (Aug 19, 2021 at 8:52)
I'm imagining some guy sitting there heat-treating the bb axle with a cigarette lighter.

pen9-wy (Aug 20, 2021 at 11:20)
Yeah and having them work loose each ride no matter how much you torqued it!
A lot of tech gets a lot of hype (droppers etc) but if you have been biking since 90's the effectiveness of the HollowTech II and similar, crank designs are just so good.

Mattysville (Aug 19, 2021 at 10:38)
Bike companies seem to be turning to eBay to source parts these days just like the rest of us.

jptothetree (Aug 19, 2021 at 15:24)
Literally a nightmare for me to hear my precious bike getting recalled by the manufacturer

stumphumper92 (Aug 19, 2021 at 8:26)
I wonder how many people will actually give up their bikes in a market where bikes are backordered a whole year... If it were me I'd just take the risk