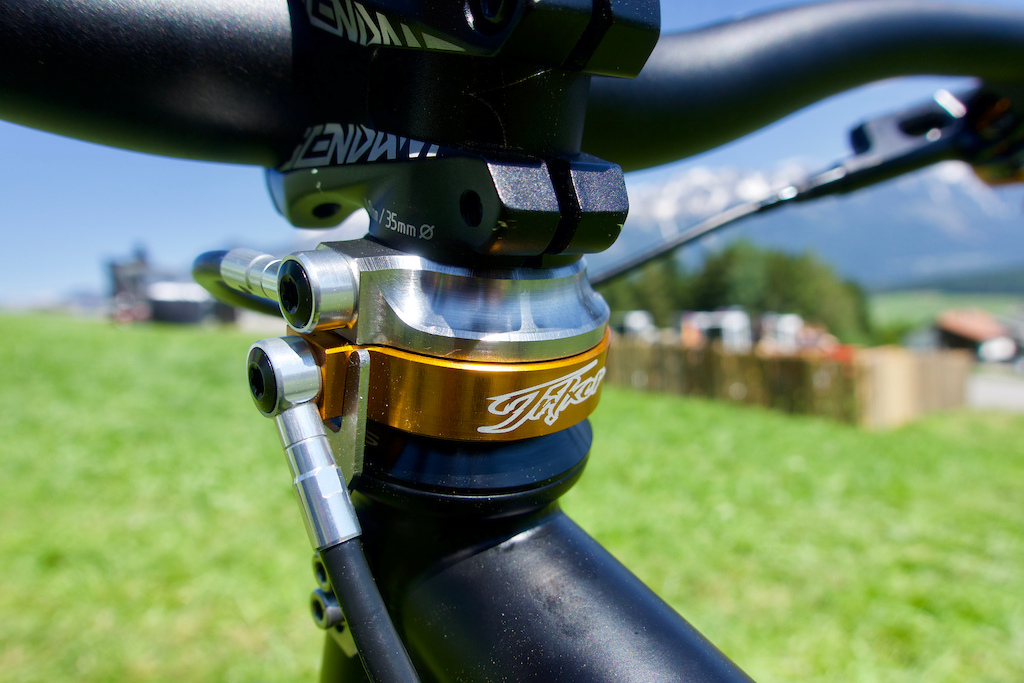 Trickstuff unveiled a production ready version of their hydraulic gyro at Crankworx Innsbruck. A gyro disconnects the brake hose under the stem so that trick ferrets doing barspins and tailwhips can rotate to their heart's content without getting tangled cables. Though now most famous for their brakes, one of Trickstuff's first products was their Trixer gyro.

Unfortunately, as with most hydraulic gyros, it wasn't the most reliable product and as the company grew and started selling products worldwide, they started to struggle to meet them requests for services and replacement seals. The new version is supposed to be a lot more reliable while still being low friction enough for the demands of slopestyle riders. 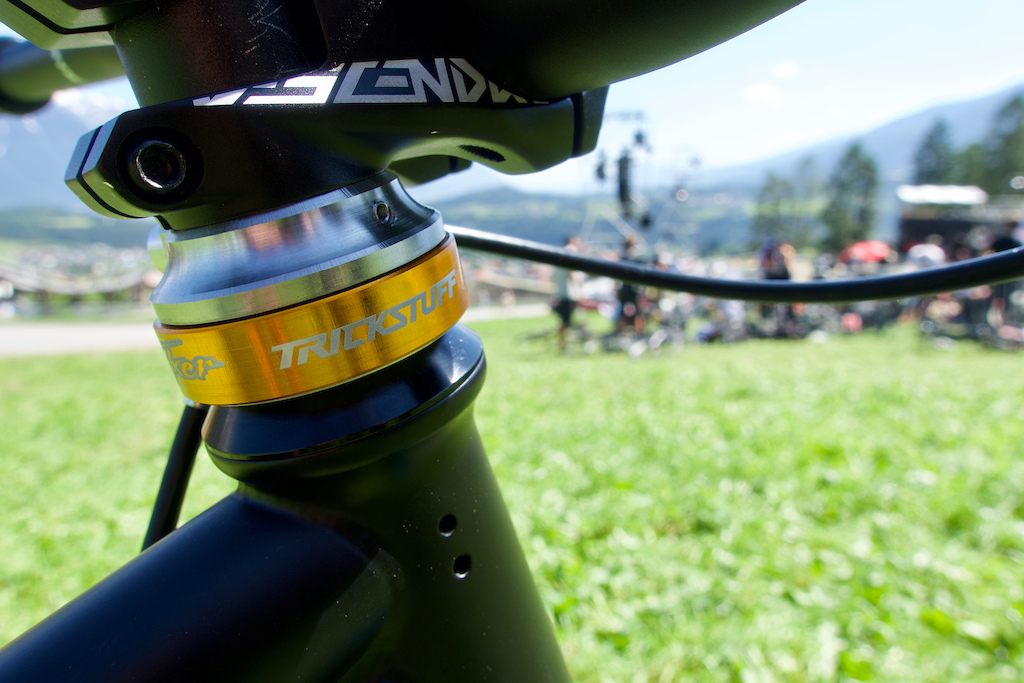 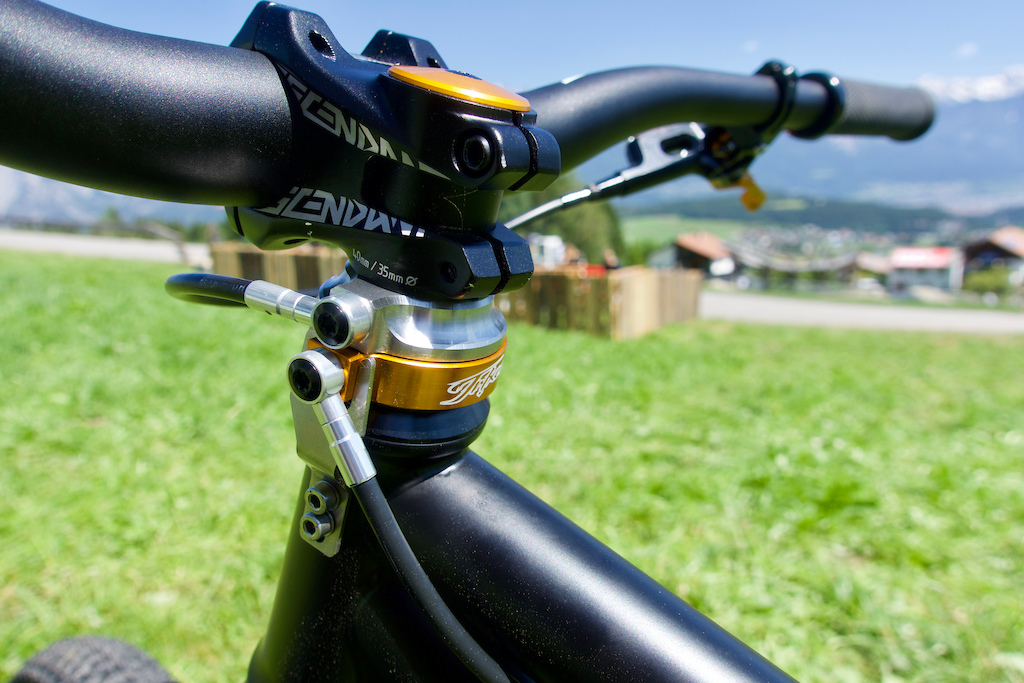 Some bikes (such as the YT Play this gyro was built on) have these steerer tube holes drilled in, ready for a gyro. If you don't have them you can drill them in yourself or Trickstuff will also offer a mount that fits under a headset.
This has been a bit of a passion project for Trickstuff and they've apparently gone way over budget in designing it, but they just wanted a product that worked. The original prototype had seven seals and was a bit of a beast, but they've managed to slim it down for the production version while still keeping it reliable. The gyro is designed to run with Shimano or SRAM brakes, and it can also run with Magura but apparently the set up is a bit more tricky. The gyro can also run with DOT fluid or mineral oil

It's a two piece design with the top half in stainless steel and the bottom half anodised aluminum. This is one product that Trickstuff don't make in house in Freiburg, Germany, but they use nearby manufacturers who have advanced enough CNC machines. It has also been tested using a rig developed by the turbo and rocket engine department at the local university.

Get used to seeing this gyro more and more, Trickstuff are hoping the product is so good they can convince enough top slopestyle riders to run it that they get all three spots on the podium in Crankworx Whistler. The gyro will be on sale either in local distributors or direct from Trickstuff in a few months for €189, riders may also have to buy a connection kit that costs €19.90. Yes, that's a lot more than wrapping a long hose underneath your stem, but it's also a lot cleaner and can be spun infinitely in both directions. 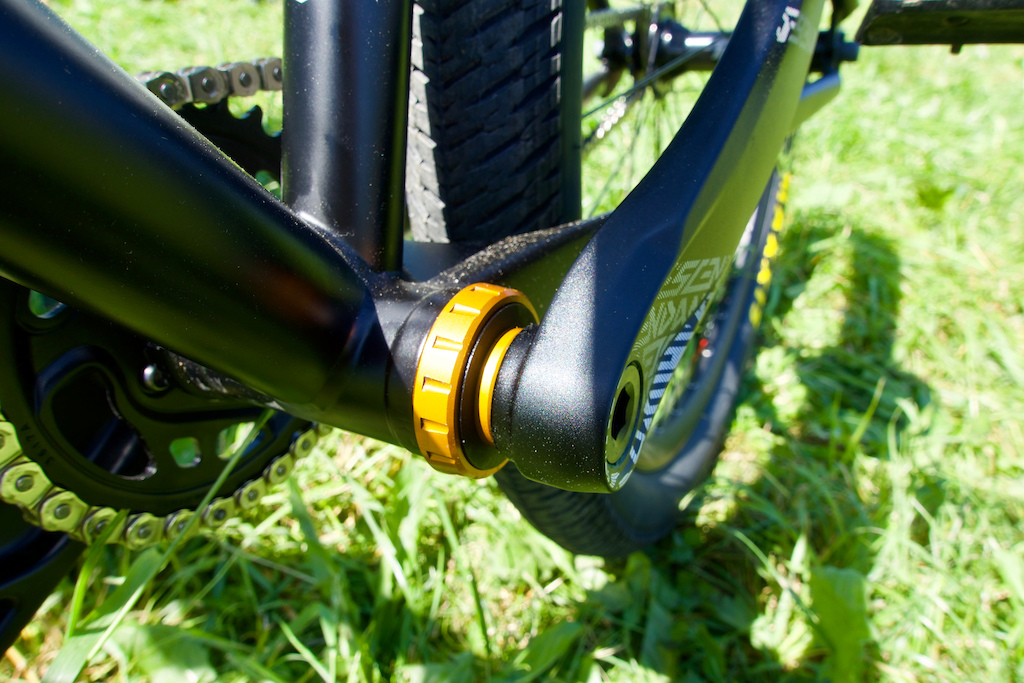 Also spotted on the bike was this left hand bottom braket cup called the NoGo that can be stuffed with o-rings to slow down the cranks spinning. Why would you want to do that? Well, if you're throwing big tricks you want to know your cranks are in the same place you left them before you land. The NoGO can take up to five o-rings and will pretty much lock out the crank if desired, this one had two in and stopped turning after less than a rotation when spun hard.

koncretekahuna (Jun 13, 2019 at 14:34)
Really happy to see a successful version of this product, no matter how niche.

Fluid Rotary Joints (the industrial version of this) are really tough to engineer at this size (formerly an engineer at rotary joint design firm), and doesn't surprise me they wen;t over budget to find a solution.

krashDH85 (Jun 13, 2019 at 16:34)
I've used a couple of these in tool design for cooling application. They are a feat of engineering for sure. Especially when the number of inlets and outlets grow!

freddiethomson (Jun 13, 2019 at 14:24)
Slopestyle riders just need sram to bring out and AXS level brake then they'd be no friction

Zaff (Jun 13, 2019 at 15:28)
Can someone link a picture of the internals or explain how these work in a manner more than my current understanding; "Magic goes in one end, magic comes out the other"?

xzpsmk (Jun 13, 2019 at 23:44)
Thank you trickstuff . Both these products cover the two biggest problem areas I have on my Dirtjumper. Really like the crank stopper idea. Always thought it was crazy that you have top riders with big name sponsors sticking grip-ends or electrical tape between their BB’s and cranks.

thesharkman (Jun 13, 2019 at 20:12)
To fit in with the new nerd XC following here on pinkbike, " that NoGo bottom bracket cup sounds like a great product for training the legs up!"

vjunior21 (Jun 14, 2019 at 7:05)
Are the NOGO bottom brackets available yet? I want to change out the BB on my friends road bike without telling him so when he goes riding he has no idea why his Strava times are high. That will shut him up.

or wrap an old tube around the spindle against the bearing...

Rubberelli (Jun 15, 2019 at 4:47)
I would assume more easy (and maybe cheaper) woukd be a wireless system where the reservoir and pump mount directly on a fork or chainstay.

fracasnoxteam (Jun 13, 2019 at 14:37)
Why don't put all that energy and money in a simple reliable, efficient and solid cable actuated brake?
Serious question.

alreadyupsidedown (Jun 13, 2019 at 17:15)
Because they already exist. TRP Spire/Spike have pads that engage from both sides, and Paul Klampers are your USA-made boutique option. No doubt there’s an expensive German option too. You can get high quality low friction cable housing, and levers with adjustable leverage ratio. Too bad they all still fail as soon as grit enters the system. The only reason there has even been a market for those products is component makers being slow on the uptake with hydraulic road bike groupsets.

BikesBoatsNJeeps (Jun 14, 2019 at 6:42)
@alreadyupsidedown: Shimano makes a nice cable operated caliper too, it is what is likely on most of the slope bikes at Crankworx. (Possibly sharpied out for sponsor gratification)

sino428 (Jun 15, 2019 at 4:12)
@BikesBoatsNJeeps: I’ve always wondered how much braking power these guys actually need. Seems like a decent mechanical disc brake would be more than enough to scrub the speed they need to in course. I had a set of avid BB7 on an old hardtail I bought and thise things work surprisingly good.

gabriel-mission9 (Jun 16, 2019 at 10:46)
Cable actuated discs are more than adequate for these guys needs. As a mechanic who used to have to bleed the brakes on a bike with a hydr-gyro, I advise you just get a cable disc. It will work better, and not need bleeding once a week.

BikesBoatsNJeeps (Jun 17, 2019 at 13:40)
@sino428: not much. BB7s are really a pretty solid option, the only drawback is the frequent pad adjustments. They got a bad rap due to inexperienced owners and shops. I maintain that if you're willing to keep adjusting the pads their not terrible. I did ride a set once a long time ago in Pisgah and had to move the back pad twice in one day to keep the engagement consistent. Plus you could wear the pad to the point where you were jamming the rotor into the caliper body.

bermkillah (Sep 27, 2019 at 6:35)
@sino428:
They dont need too much power on course, but i find it easier to control speed precisely with a hydraulic brake, plus its better for tailtaps etc... in a skatepark

WAKIdesigns (Jun 13, 2019 at 14:40)
@brianpark Mike Levy should have one on his short gravel bike
Below threshold threads are hidden