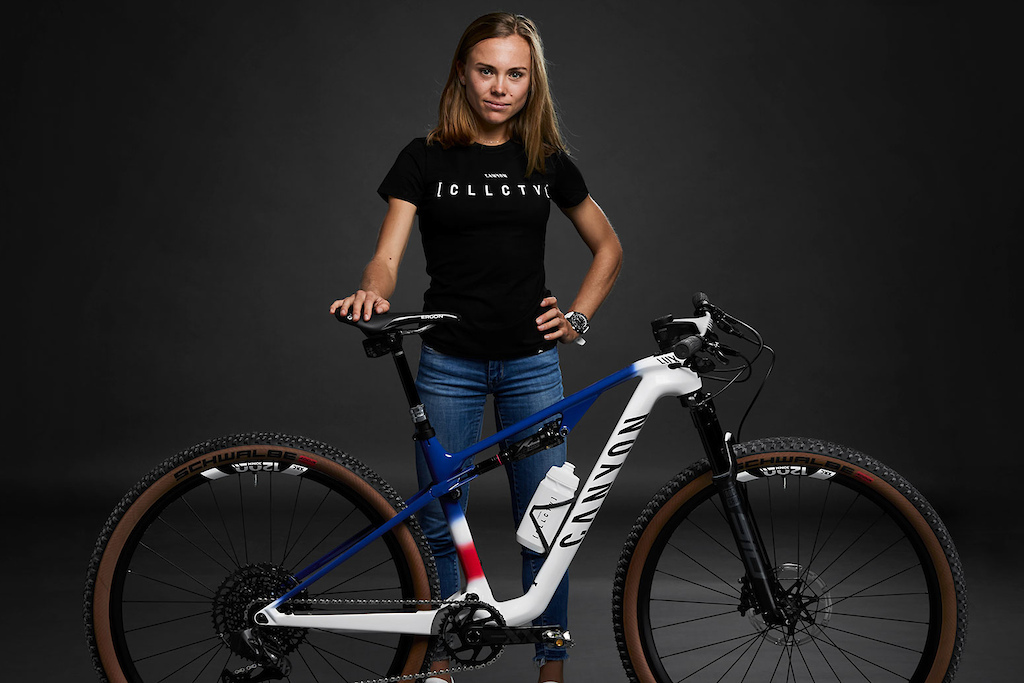 Loana Lecomte has signed with a new Canyon Cllctv XCO team alongside fellow countryman and regular top-ten finisher, Thomas Griot, as well as reigning German XC Marathon Champion Luca Schwarzbauer. It looks like the new team will be a separate entity from the Canyon Collective Factory Team that formed in 2021 featuring Emily Batty and Laurie Arsenault.

Lecomte took the elite field by storm in her first year in 2021, winning four consecutive World Cups and the overall title while riding for Massi. What makes it even more impressive is that at just 22 years old, she could still have ridden in the Under 23 field if she wished. Although the frame will be new for Lecomte, it shouldn't be too hard for her to adapt to the new set up as she brings with her the Massi team managers, Sébastien François and Claudia Baudry, and her mechanic Thibaut Rivière.

Lecomte will also be rinding alongside Thomas Griot, 27, of Annecy, France finished off 2021 with a top ten overall World Cup ranking and a podium finish in Leogang. He said: 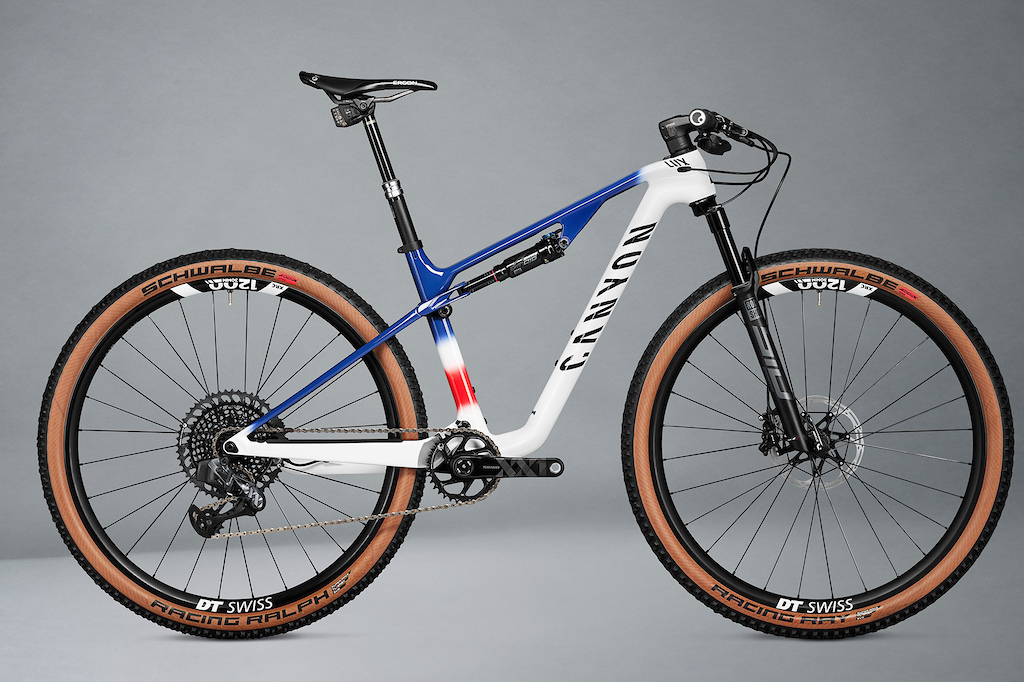 
We don't have much more information on the team at this time but it seems that a big goal for Lecomte this year is a gold medal at the World Championships on home soil in Les Gets, she already even has a custom Tricolore bike. There's also apparently more news coming from this team in February with another rider announcement. We'll update you on that when we have it.

lkubica (Jan 11, 2022 at 2:29)
But really, this idea of sending vowels to a black hole is like hydraulic actuation of a dropper post, dumb beyond understanding, yet so persistent

michaelbozof (Jan 11, 2022 at 10:04)
@crsimmons: and now with all the youngsters riding mtb, brands are going to sponsor a lot more people

juuro (Jan 12, 2022 at 4:35)
Mhh.. Alpecin Fenix is not a XC team. Except for Ronja Eibl they do XC only on the side (sadly).
The Emily Batty Canyon Team does not feel like they have an absolute focus on winning races. At least Emily Batty doesn't, Laurie Arsenault maybe, but she is not yet on a top level. Also the Batty team seems more focused on North America.
I think Canyon wanted a team that's fully focused on winning World Cups and performs on the highest level of XC. And I think that's great because it means Canyon is invested in their XC bikes.

Planetx888 (Jan 11, 2022 at 4:45)
she didnt just win the first four races, she led every lap of those four races. Got out front on the short start lap, and just opened up the gap from there. She won by an average of somewhere around a minute and a half in those first four races.

aaronjb (Jan 11, 2022 at 7:21) (Below Threshold)
Totally normal, especially coming out of a year of reduced testing, OOC or otherwise. It's about peaks and eating well, according to some commenters here.

nattyd (Jan 11, 2022 at 8:02)
@aaronjb: Those of us whom have been around for awhile know better than to confidently hold that a rider is definitely clean. But, I'm not sure why Loana deserves more scrutiny than other dominant riders, e.g. Fluekiger, Nino (in past years), MvdP, Evie Richards last year, etc.

Loana has been dominant for two seasons, is the age when new stars often rise, is visibly leaner than many of her rivals, and has undeniably great skills (watch her high-post stuff that other elites can barely ride with droppers). If the only reason to suspect her is "she was really good", why bother watching the sport at all if success is automatically invalidated by suspicion?

ReformedRoadie (Jan 11, 2022 at 8:03) (Below Threshold)
@aaronjb: Seriously...she maybe should have dialed it back for the optics of it. She, or someone managing her had to know it would raise all sorts of eyebrows. Before they developed a test for EPO, you had guys big ringing mountain stages of the Tour, breathing out their noses. At least make it look like an effort.

Mtmw (Jan 11, 2022 at 14:00)
@aaronjb: please don’t be ignorant. There is no test for reinjecting your own blood (autologous transfusions). There was no test when Lance was doing it and there’s no test now. You just have to believe that it’s a sport where no one would cheat.
The closest we ever got was this Duke paper that went nowhere:

Mtmw (Jan 11, 2022 at 16:20)
@nattyd: yes that’s what bio passport is for. As noted elsewhere in the thread, it has never worked. Specifically, in 14 years of operation there have been zero “adverse analytical findings “. It just won’t hold up in court. They can use it to become curious about an athlete but that’s it.

@Mike-Jay the plasticizer tests fired for two reasons. 1 turns out all modern humans have plastic in their blood 2 glass lab ware.

There is no test for blood doing with your own blood. There has never been one.

ReformedRoadie (Jan 12, 2022 at 9:43)
@DBone95: so...when Armstrong was winning those tours and literally the entire top ten was popped for doping you believed he was beating them clean, right? He also put in an awesome effort.
All the top end of endurance sports athletes are genetic freaks with the latest sports science backing...both within and outside the rules. To crush the top woman the way she did IS a bit suspicious. Sorry.

Maybe I don't follow junior woman's XCO that close, but most of the top riders - from Vali, Jackson, and Tedaj on the road, you hear something about them on the way through juniors. Never heard of her prior to here not beating, but destroying the women's field.

As a side note Greg Lemond also was running the calculations of Lance's Watts/KG, and that also arose suspicion.

DBone95 (Jan 12, 2022 at 14:30)
@ReformedRoadie: So just because you never heard of her prior to last year she must be cheating? It could have nothing to do with her being at peak form early while the veterans of the sport had their eyes on Tokyo in July? To sit behind the anonymity of your computer screen and toss vile, unsubstantiated shit out of your mouth about something you admittedly know nothing about is such a 2020s thing to do. Aaron the one man crusader shot Loana a DM and she ignored it and that's what has his panties in a wad..... Hey, this is fun just making shit up. Comparing Loana To Lance? GTFOH

iamamodel (Jan 12, 2022 at 14:44)
@ReformedRoadie: The fact she's only 22 but is racing Elite is proof she was killing it in Under 23s because otherwise she couldn't qualify to race Elite. We don't need to have heard from her.

ReformedRoadie (Jan 13, 2022 at 6:47)
@DBone95: no. not because I never heard of her. because she utterly destroyed the women's field...looking like she wasn't putting in an effort, nevermind an "awesome effort". Your statement implies that the other women were not also putting in the effort. We'll see what happens this season. If w/o the Olympics Neff is more focused on WC races and maybe Courtney rebounds from an off year.

The reference to Lance was mainly for perspective. Was it realistic to think he beat all of the other top tour riders clean, while they were caught doping? Are you trying to say her performance shouldn't raise any questions? Some of those races were like Kramer in the dojo... Even Nino or Absalon at their peaks were not crushing souls the way she did for those 4 races.

Mike-Jay (Jan 14, 2022 at 5:42)
@ReformedRoadie: to be honest in the LA era, Lance smashed riders who were equally doped to the eyeballs as he was. So in reference to Loana, are you implying that they’re all doping or none of them are? Whichever way you put it, she was head and shoulders above the competition.
Don’t forget that LA was also World Champion at 21. He was/is an immensely talented and driven athlete.

maglor (Jan 11, 2022 at 3:28)
Doesnt matter who you put on that bike or how many times it wins i still wouldn't buy it becuase of the looks and geometry, hopefully they are also splashing the cash on an updated frame.

On the exceed she's on XS though:
esmtb.com/wp-content/uploads/2022/01/canyon_loana2.jpg

tacklingdummy (Jan 11, 2022 at 9:52)
How can Canyon have two different teams in the same disciplines? That is just strange. Seems like it would create some reality show drama at Canyon. Lol.

juuro (Jan 12, 2022 at 4:44)
It's totally normal that a frame brand sponsors ore than one team. Scott for example has at least two teams (Scott SRAM Racing and Lexware) which they sponsor officially. Trek had also two (Trek Factory and Trek Vaude). Specialized also has at least three (Specialized Racing, Trinity Racing and Team31:Outride). And so on ...

jspier (Jan 11, 2022 at 6:20)
An argument could be made that this is their only XC Race Team with a female rider. Doesn't matter how bright the colours are in a paint job racing in the back rows, this one will be way more visible!

oxentiel (Jan 11, 2022 at 6:41)
@jspier: Nope, they have the Canyon MTB Racing (Emily Batty and Laurie Arseneault) and Alpecin-Fenix with two strong young riders, Ronja Eibl and Puck Pieterse. But I agree on the "visibility" thing, Loana should be in front of them.

jspier (Jan 11, 2022 at 8:18)
@oxentiel: Fair point - I forgot Pieterse and Eibl were on Canyons (and they both had great seasons, with even more promise), but I'm still not sure what the realistic goal is for the Canyon MTB Racing program. Kind of the opposite side of Geoff Kabush's recent editorial.

prevail (Jan 11, 2022 at 9:54)
Emily is on another team. She is just the marketing campaign for Canyons North America launch.

samosaking (Jan 11, 2022 at 10:01)
After riding last race season without a dropper, I wonder how long she will go before dropping the the axis from her set up.

@deanw Looks like she has a dropper as you hoped.

Will-narayan (Jan 11, 2022 at 12:22)
Explaining for those who don't understand my post : Backlight in my room made all dark shades similar, therefore the only thing popping out in the thumbnail was the white parts, which look like a urban frame with no toptube.

epenzes (Jan 11, 2022 at 5:56)
I could not imagine a less appropriate rider for Canyon Cllctv. Dissapointed, sorry.

iammarkstewart (Jan 11, 2022 at 7:08)
My guess is Canyon said something similar about you after perusing the list of those they would hope to augment their team(s). They may have been as disappointed with your spelling.
Post a Comment