The organisers of the Maribor World Cup have confirmed the event will now take place in August due to the effects of the COVID-19 pandemic.

The race will now run on August14-15, making it the fourth round of the series, sitting between Les Gets at the start of July and Lenzerheide in early September.

The revised calendar will now be: 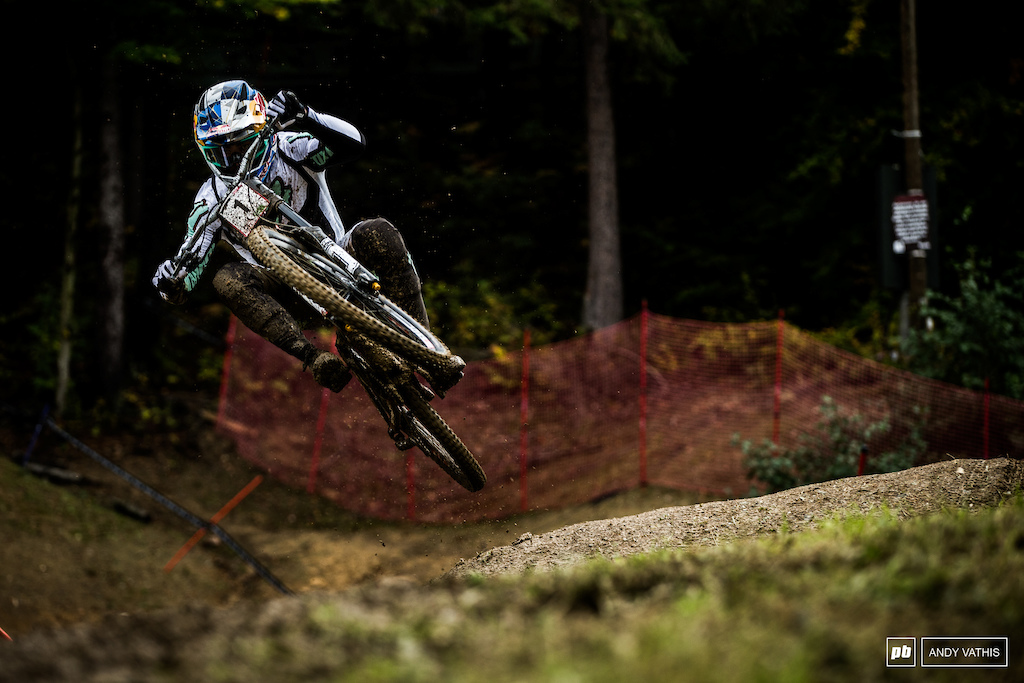 The Maribor World Cup will be postponed from its April date due to the effects of Coronavirus.

The event was originally scheduled to open the season on 24-25 April this year but we have since been told this date will no longer be possible. Slovenia has recorded a total of 193,000 cases of COVID-19 with 3,878 deaths. The country currently has a number of border restrictions in place, a ban on gatherings of more than 10 people and a curfew in place from 9 pm to 6 am.

The UCI and Maribor are expected to make an announcement on Monday with a new date for the event that is expected to be sometime in August.

With rider safety paramount at any event, we commend this tough decision by the Maribor organisers and look forward to the race when it happens later in the season. We will update this story with the new date when we hear it.

hamncheez (Mar 5, 2021 at 8:00) (Below Threshold)
1. What else could the UCI do? The government of Slovenia gets to call the shots. The UCI shouldn't go around bad mouthing host countries.

2. This has nothing to do with the health and safety of the riders. Young, especially athletic people have a chance approaching 0 of getting seriously ill or dying from this. For people in this demographic, the normal seasonal flu has a higher death rate.

Matt115lamb (Mar 5, 2021 at 10:28)
@hamncheez: it’s not about they’re age , it could spread around the teams then everybody is at risk including team owners, drivers , mechanics and cooks and so on . Then they all go home to families and us lot !

DylanH93 (Mar 5, 2021 at 10:42)
Don't you realize, this virus isn't real! What do you think happens when Bill gates makes us all get nano bot vaccines then the Chinese broadcast 5g across the world? It's electrical infetterance man!

fatduke (Mar 6, 2021 at 7:38)
@powderturns: yes you have North America and South America unless my geography is way off.

powderturns (Mar 9, 2021 at 5:58)
@gnarnaimo: indeed. Haven’t seen many red flaggers ranting on this topic. Even fewer red and green flaggers...

MarcusBrody (Mar 5, 2021 at 6:45)
I think this makes a lot of sense. With vaccination ramping up quickly, a couple months delay will likely make a big difference. No reason to rush here.

PTyliszczak (Mar 5, 2021 at 7:17) (Below Threshold)
@DHhack: What current pace are you looking at? The US is vaccinating 2 million people on average per day. 54,000,000 have one shot already so it would be 276 days to give every single person in the US a two shot vaccine. But we won't all receive two. Say half of the remaining population get a one shot vaccine you get 138 days to cover the whole country. Then consider herd immunity is effective at 70%, but not all vaccines are perfect so probably 85% of the US need to get it: 113 days.

Philly has a posted population of just over 1.5m

Gee and Loic definitely look fit enough for it. They’re downhill machines! Who else? I need some Fantasy DH names!!!

I’m thinking Minaar would be taking names and Reece Wilson looked utterly composed as well. 2021 could be anyone’s year honestly. Whoever’s been putting in the most work during this downtime should be on the podium I think!

thejake (Mar 5, 2021 at 6:26)
If your a World Cup racer that likes to procrastinate on training last year and this year are amazing.

PTyliszczak (Mar 5, 2021 at 6:52)
By May almost everyone in the US will be able to have a vaccine, the rest of the world will also be picking up as vaccines like J&J ramp up production. It makes sense to hold off for a few months for when things will be safer and a bit more normal.

Mntneer (Mar 5, 2021 at 6:58)
This makes sense. Slovenia had a higher death per capita number than the United States. Sounds like this is the country’s first attempt at any sort of covid restrictions/measures

hardtailhowie (Mar 5, 2021 at 19:46)
They were in lock down by county last year. They had tighter travel restrictions then the U.S

hardtailhowie (Mar 6, 2021 at 7:10)
@Mntneer: Could be that the average age of the country is 45 where the U.S average is 38. There are also a lot more generational house holds in European Countries (sometimes 4 generations).

winko (Mar 9, 2021 at 10:22)
@Mntneer: measures failed to protect the critical part of population as covid found its way in literally every retirement home... average age of people who died is very high and thats why we are in the very top per capita!

withdignityifnotalacrity (Mar 5, 2021 at 7:38)
Shoulda just done a bubble season in NZ/Australia like the NBA.

richiethornhill (Mar 5, 2021 at 9:58)
its not the worst of idea's, pretty sure most riders would happily spend the Northern Hemisphere winter in NZ Summer riding bikes.

blacktea (Mar 7, 2021 at 23:49)
Slovenia's problem is that it has not implemented a valid regulation to get out of this health crisis (they also have political and economic crises but on this site they do not care). People do not wear masks, they continue to move within the territory (and to come to Italy even if we have a decree that prohibits out-of-the-ordinary travel). The infection curve in Slovenia remained practically linear even when it was falling in the rest of the Balkans. Now it's going up a little bit everywhere, so I don't see a solution close. I think forget Maribor this year.

curendero (Mar 9, 2021 at 18:11)
Seriously now folks...Fck traveling and sports, restaurants, etc. People are ignorant and selfish. Protect yourselves. No one else will.

chakaping (Mar 5, 2021 at 9:00)
Don't forget to include the calendar in the article please Pinkbike.

RustySaguaro (Mar 5, 2021 at 6:55) (Below Threshold)
White trash embarrassments to the USA making life miserable for everyone.

Mntneer (Mar 5, 2021 at 7:21)
@RustySaguaro: electric boogaloo is a reference from Its Always Sunny. You seem to have some sort of stick protruding from your ass

showmethemountains (Mar 5, 2021 at 7:52)
@Mntneer: something "2: electric boogaloo" is actually a reference to the title of a 1984 movie about breakdancing, and has been a sequel joke since then. It's Always Sunny probably helped that joke become a bigger meme in recent years though

ididntknowhatomakemyusername (Mar 5, 2021 at 6:26)
flashbacks....
Below threshold threads are hidden

4thflowkage (Mar 9, 2021 at 8:40)
@GrandMasterOrge: They want to give Pierron time to get back up to speed after his crash. Guess the Illuminati root for him.

Thirty3 (Mar 5, 2021 at 7:44)
We also should cancel because of the flu.. remember the boring ol flu that has killed millions over the years. Yeah, still a thing.

suspended-flesh (Mar 5, 2021 at 9:48)
No, it's not a thing this year, actually. We killed it off as collateral damage in the Covid-19 battle. Check the flu stats. Poor thing had a terrible time spreading. Crazy that prevention actually works.

StanMarsh (Mar 5, 2021 at 16:13) (Below Threshold)
@suspended-flesh: Yes the flu magically disappeared this year and it had nothing to do with the fact that anyone with the flu was recorded as having covid. If a mask could eradicate the flu why didn't we do this decades ago? Why did we let hundreds of thousands, if not millions die of the flu?

suspended-flesh (Mar 6, 2021 at 18:02)
@StanMarsh: Because people can't keep their pie-holes shut around one another?

RustySaguaro (Mar 5, 2021 at 6:56) (Below Threshold)
White trash embarrassments to the USA make life miserable for everyone.

RustySaguaro (Mar 5, 2021 at 6:55) (Below Threshold)
White trash embarrassments to the USA making life miserable for everyone.

suspended-flesh (Mar 5, 2021 at 9:50)
@specialk1: Because old Whiteys are still hanging onto power and conspiracy theories in this country.

DylanH93 (Mar 5, 2021 at 11:01)
@suspended-flesh: I mean, the US is majority white. Is it surprising many old white people are in power? By the numbers we're one of the most diverse countries in existence.

specialk1 (Mar 5, 2021 at 6:48)
Everyone on the planet is returning to normal and DH mtb pros are going to hide in their homes from the 99.9x% survivable virus for another YEAR

RustySaguaro (Mar 5, 2021 at 6:57) (Below Threshold)
White trash embarrassments to the USA make life miserable for everyone.

freestyIAM (Mar 5, 2021 at 11:29) (Below Threshold)
@specialk1: probably that your dumb views are "informed" by your race and racist view. Prove him wrong (bet you cant)