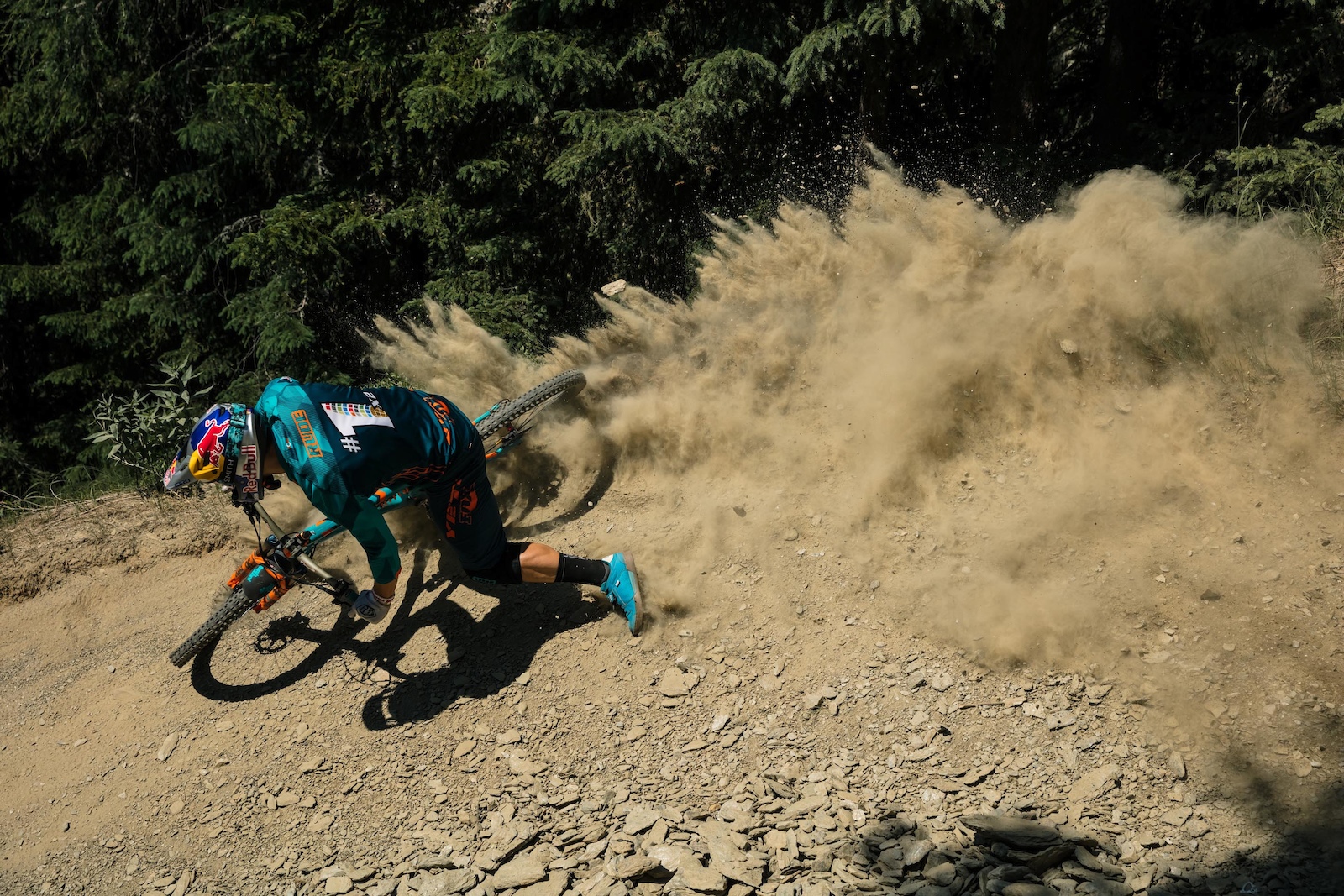 Armed with a wry smile and cunning skill on the bike, he is a man of few words. He prefers to let his riding do the talking. Richie Rude is the Silent Shredder. He won’t tell you many details about his run that locked down the Junior World Championship DH title for him in 2013. Or how he comes back from flats or mechanicals on the most challenging enduro tracks in the world to win stages, seemingly out of nowhere. He isn’t one to boast about back-to-back EWS World Championships. When you ask him how he rides at such daunting speeds and with undebatable skill, it’s usually in five words or less and accompanied by an unassuming shoulder shrug. Ride head to head with Richie and you, and nearly any other rider out there, will be lucky to get a word in edgewise. When the quiet speak, they don’t always do it with words. 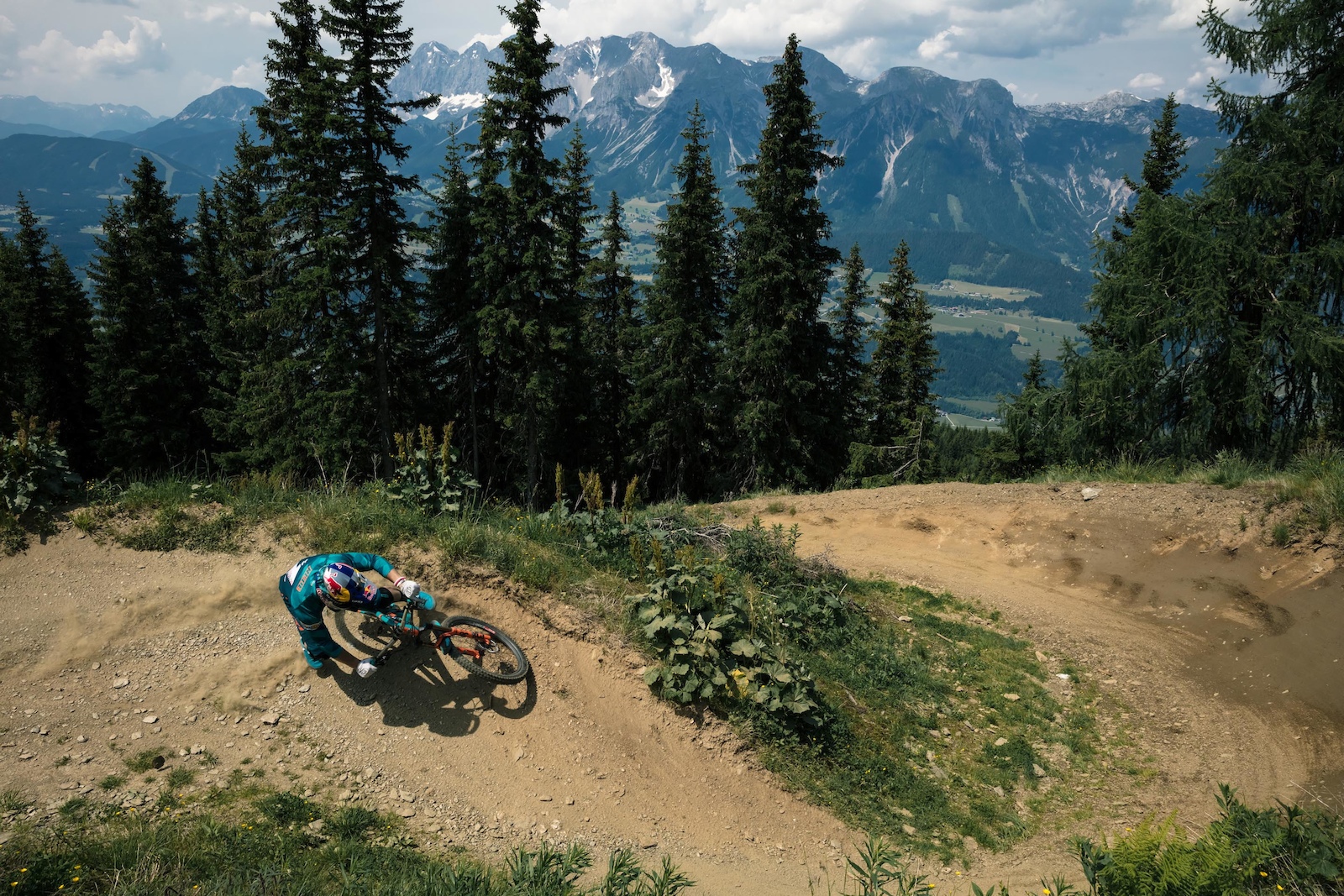 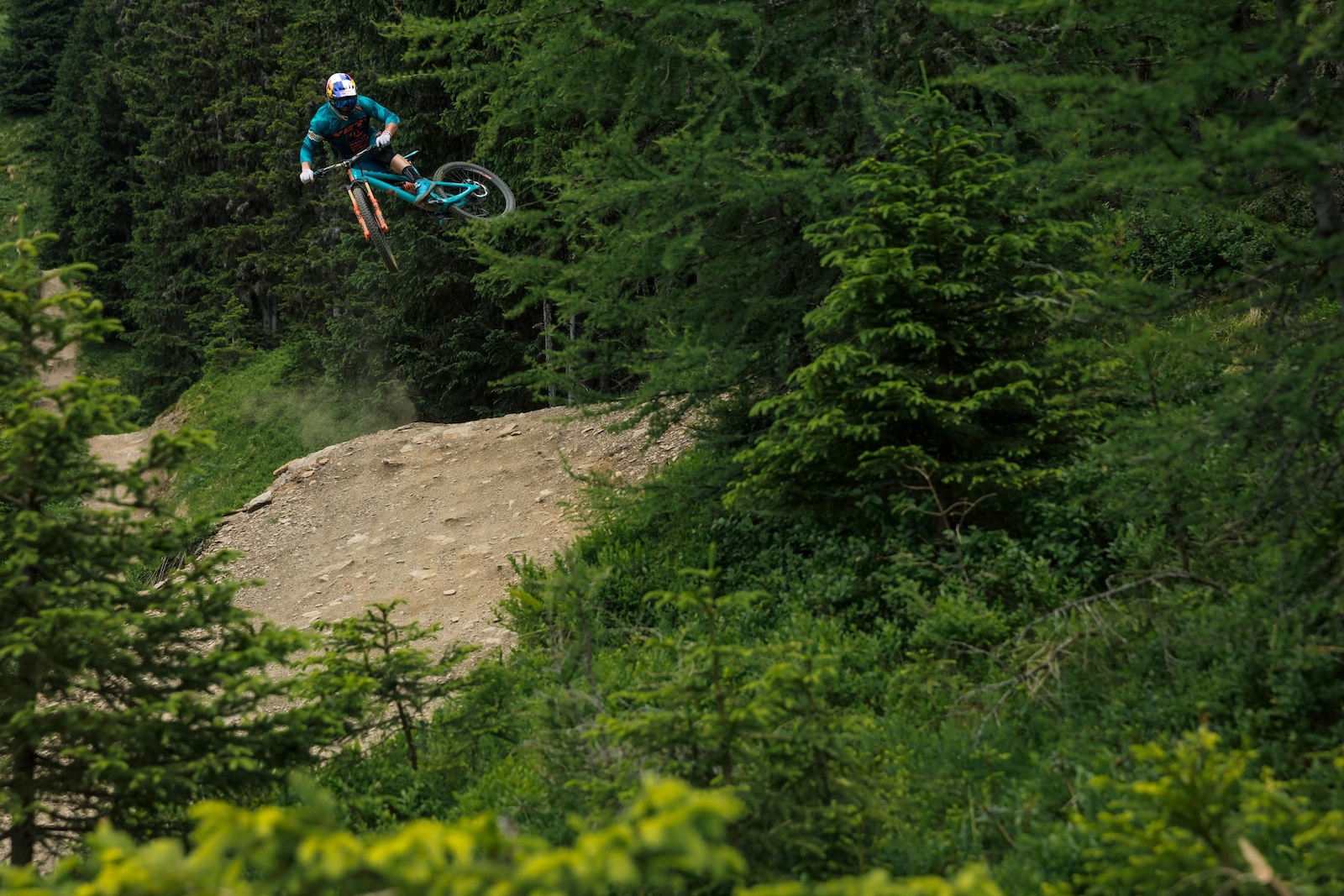 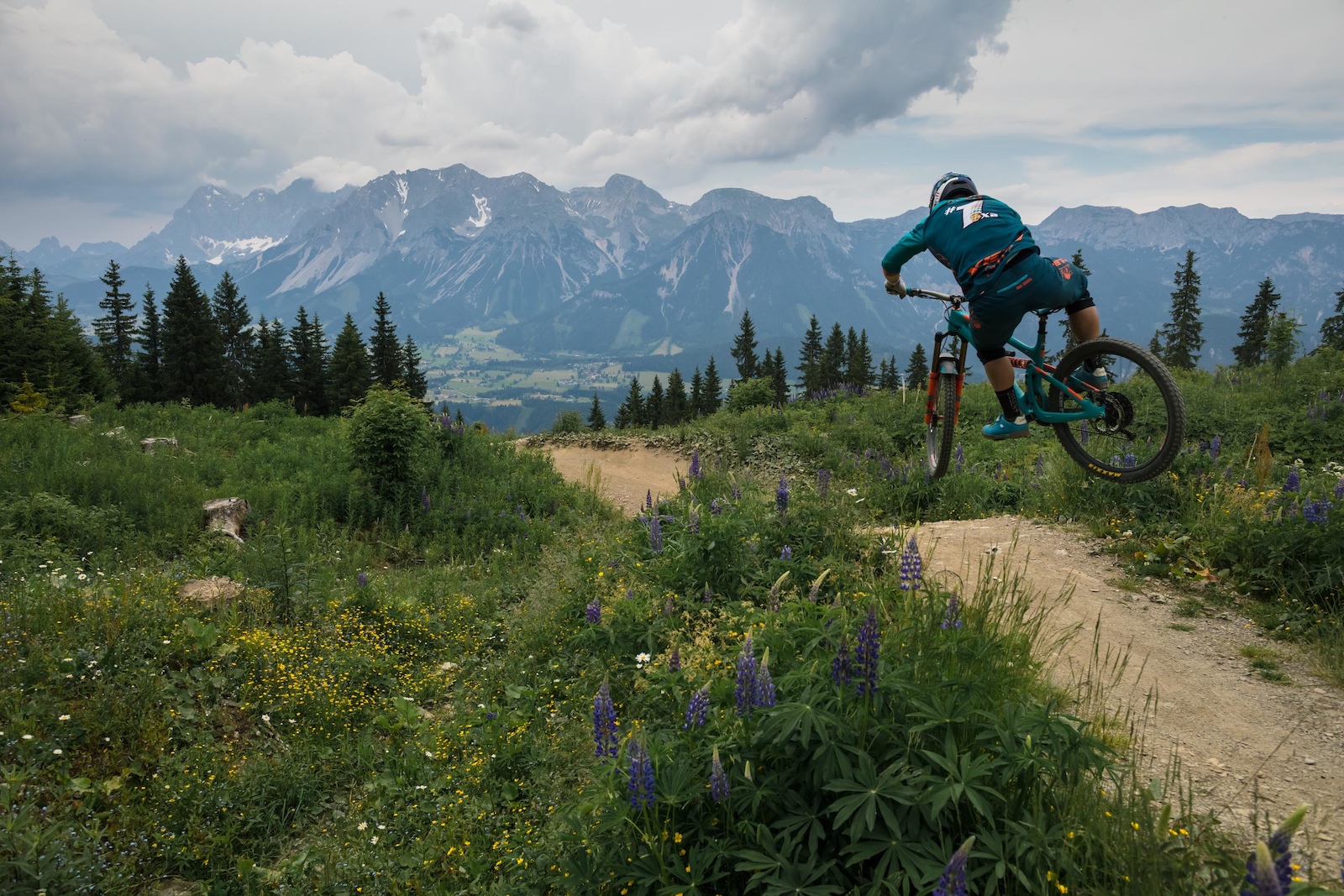 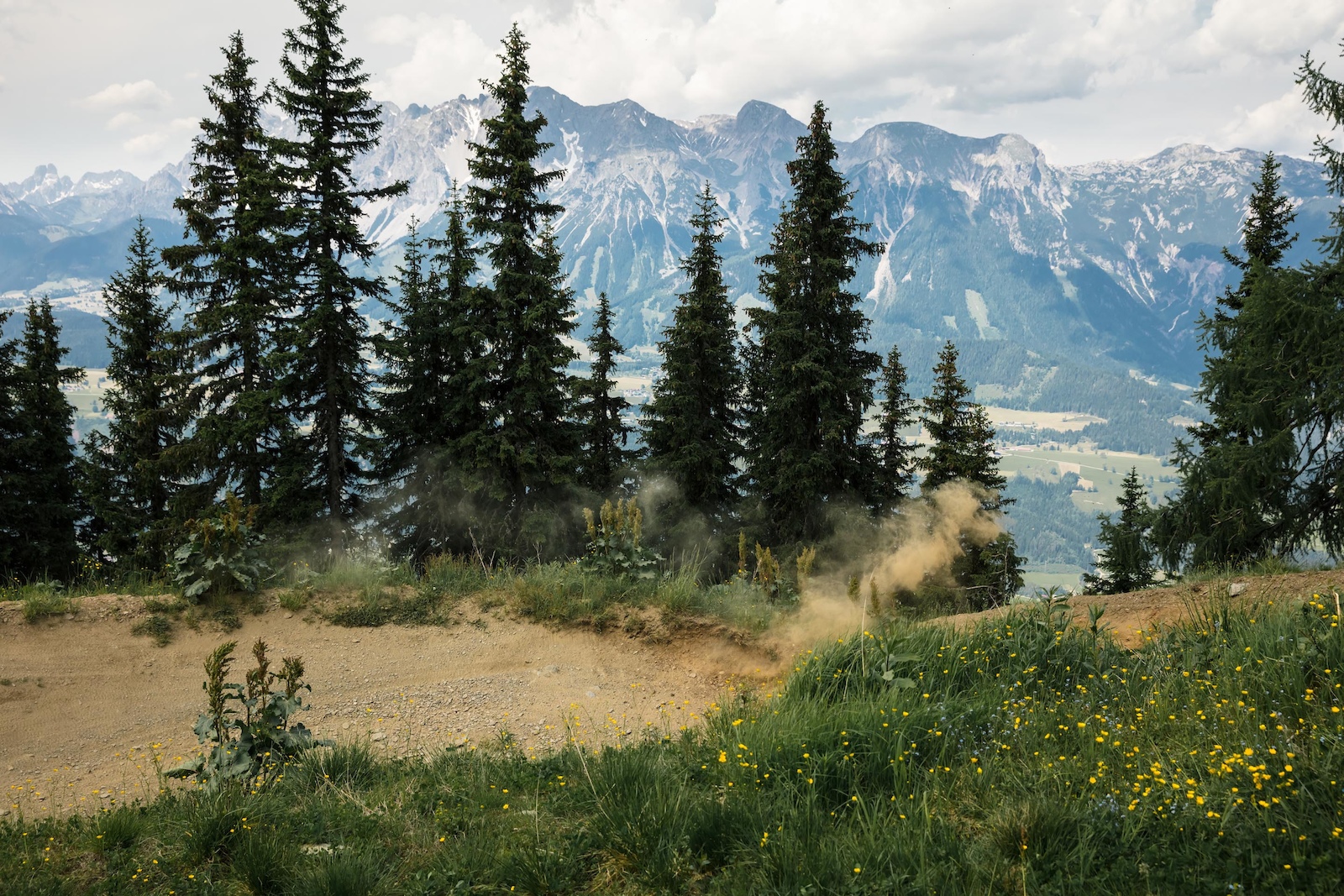 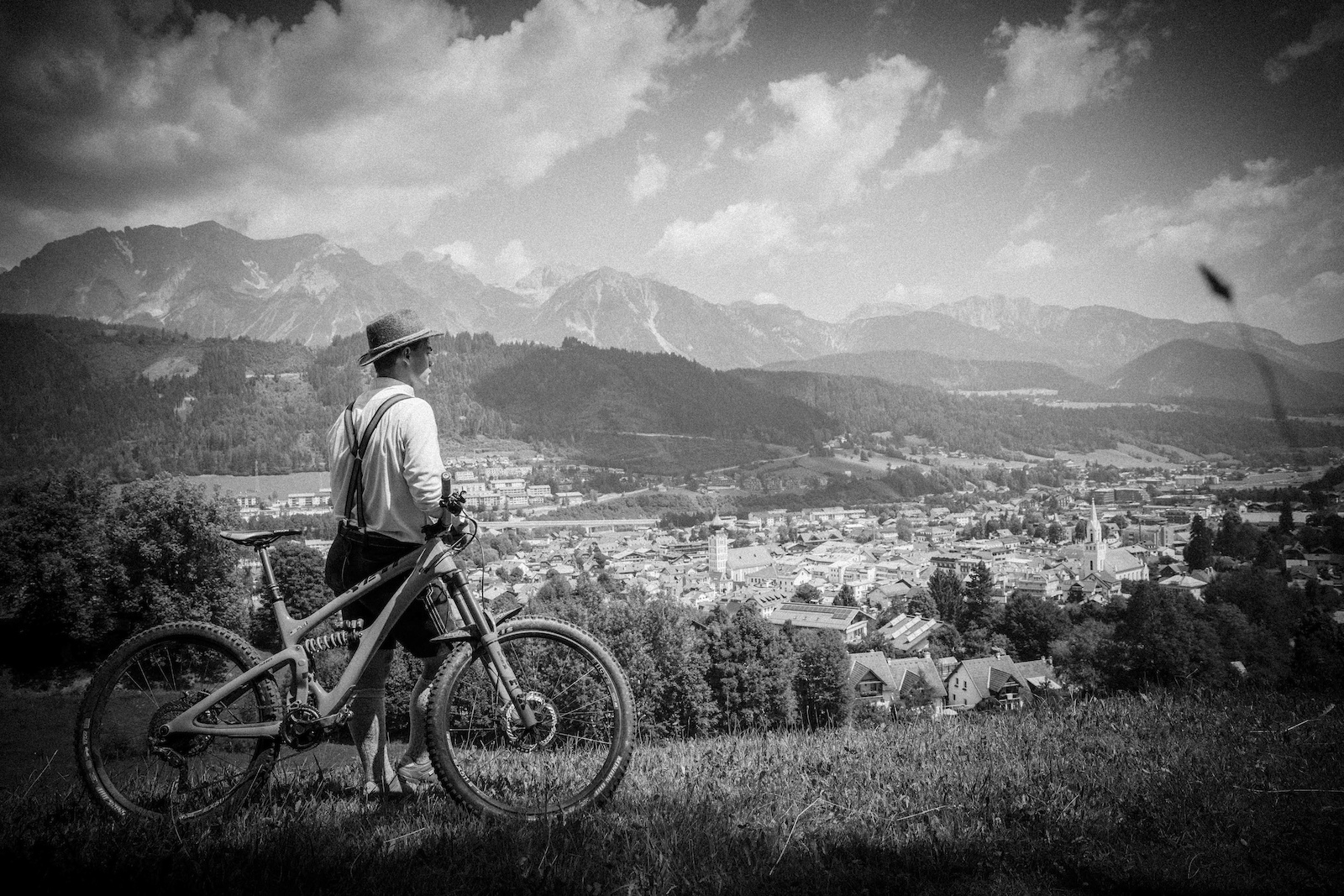 cgdibble (Oct 19, 2017 at 9:40)
Damn, I went rewatched it because I had missed that subtle move. That was gloriously skillful.

kubaner (Oct 19, 2017 at 19:23) (Below Threshold)
I'm sure Richie did some amazing shit in the video, but I shut it off after 30 seconds of the Pinocchio crap. Not for me. Richie ain't a puppet. I'm gonna go watch him ride mountain creek now

LittleDominic (Oct 19, 2017 at 14:04)
@ReformedRoadie: Dang, was my joke really that unfunny or did no one get it? If any of you think I don't know Rude is an absolute beast of a rider, or that his 10th place position for the year doesn't at this point really take away from his reputation, let me clearly state for the record Rude is one of my favorite riders to watch and Yeti puts out some of the most scenic and professional edits in the business.

krazieghost (Oct 19, 2017 at 19:21)
@LittleDominic: I think folks were more upset about you baggin on Matt. A lot of bourne lovers on this site.

dirtyrig (Oct 19, 2017 at 8:13)
Hey Richie, where have you been hiding those awesome lederhosens? I haven't seen you wearing them at Mountain Creek!

ceecee (Oct 19, 2017 at 12:28)
They're a TLD prototype. The 6k weave MIPS suspenders allow the Hosen to rotate independently of your junk in the event of a crash.

pappas717 (Oct 19, 2017 at 11:55)
Richie is BY FAR the nicest, Most humble guy that can ride a bike that fast. Don't be afraid to say hi if u see him, He is super cool and always willing to answer a few questions to help you out. But yes, He really just wants to ride his bike rather than chit chat about it.

Peteridesbikes (Oct 19, 2017 at 23:59)
Mr Hill was considered unbeatable at Schladming at one stage. I'd love to see a clip of Hill and Rude destroying the course. Here's a throw back edit with the legend that is Mr Nathan Rennie thrown in.

YoKev (Oct 19, 2017 at 18:15)
IMO, Yeti not interested in DH is holding RR back.
Methinks he'd instantaneously be a top-five WC DH racer.
I'd love to see what AG and RR on the same DH team(on an American bike of course) would do

webskier (Oct 19, 2017 at 15:05)
If i'm not mistaken (which happens a lot) Yeti jumped on the EWS series and dropped their downhill team to focus on enduro near when Rude joined, so he is kind of committed to enduro.

dirtyrig (Oct 19, 2017 at 15:17)
He did race DH when he was younger, before Enduro was around, I've seen him race DH in New York and New Jersey at Plattekill and Mountain Creek, he was a beast back then and just a teenager, that's why he's so good at Enduro, he raced DH first!

Trudeez (Oct 19, 2017 at 17:09)
Richie’s bike handling skills are insanely good. I feel like his skills get overlooked because he’s so fast and such a strong racer but, I feel like he can keep with Wyn, Brendog, Kerr and all the others when it comes to sheer skill and talent.

herzalot (Oct 19, 2017 at 21:32)
Hmmmm...I kinda hated the cheezy black and white "oldies" stuff, but worth getting through to see the real riding. Man-Child is a beast! I love that his teammates call him "Dick Rude."

oreamnos (Oct 20, 2017 at 9:33)
It is always humbling watching a professional at the top of their game. Goosebumps.

suspended-flesh (Oct 19, 2017 at 11:18)
Ha - the first thing I thought when I watched this was "that looks like the ratboy park trail in Deathgrip"

countrygravy (Oct 19, 2017 at 19:40)
This video made me realize that Richie is a master at cornering...and cornering is the name of the game