Two different riders from two different disciplines and from two very different backgrounds. But like many things, there is, of course, one common connection; bikes, bikes, and more bikes. Nino Schurter - the 4x world XC champion, and Olympic medalist. And Brendan Fairclough; downhill racer, style icon and natural talent on two wheels. Both, however, are consistently fan favorites both on and off the race track. 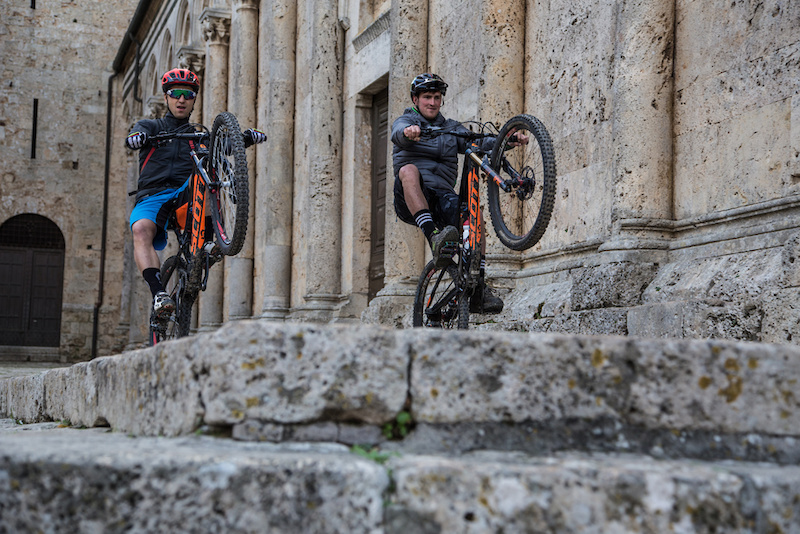 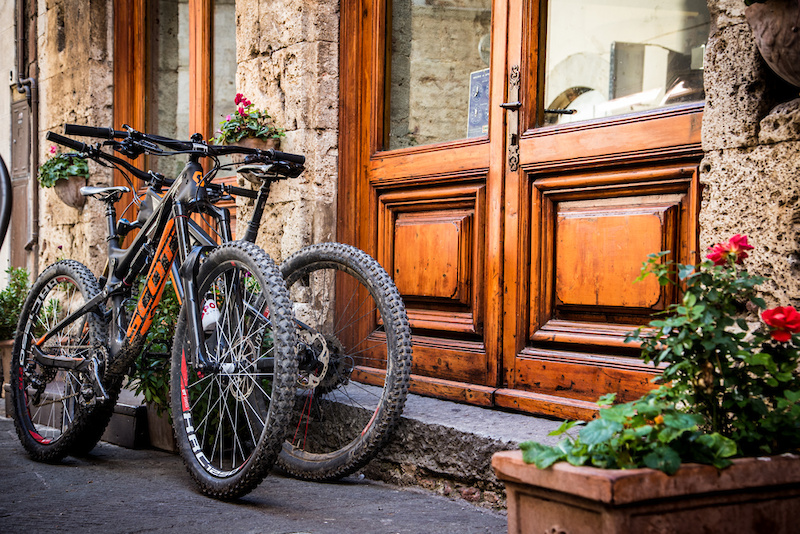 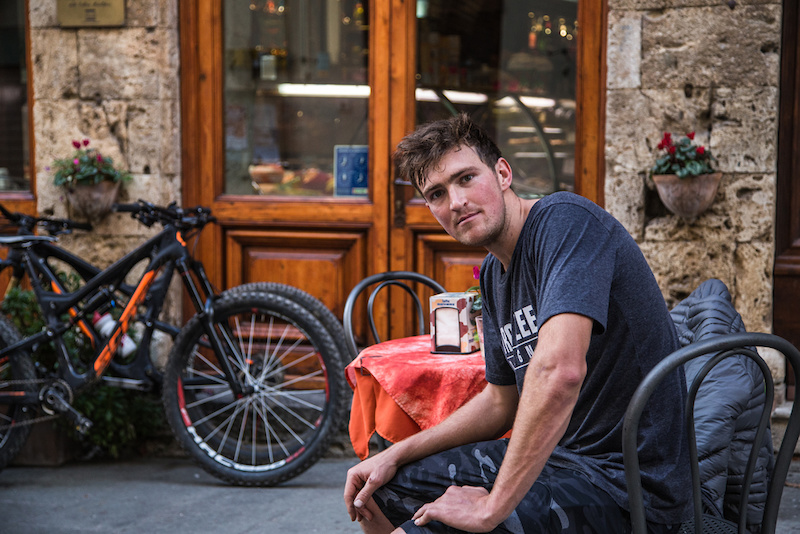 For the past several seasons, Nino and Brendan have found some time to get some training in together during the off-season. Why would a lycra clad World Champ want to “train” with a full face helmet wearing, corner roosting DH racer from the South of England? It’s pretty simple, Nino learns from Brendan, and vice-versa, Brendan learns from Nino. Each of their respective specialties and traits can only help one another in their respective disciplines. Both are extremely talented at what they do, and when you mix and match professional athlete’s qualities, only good things happen... 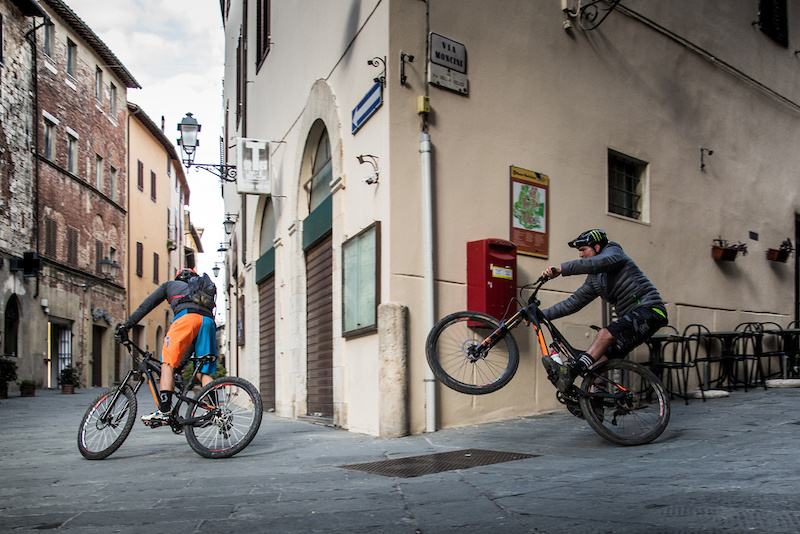 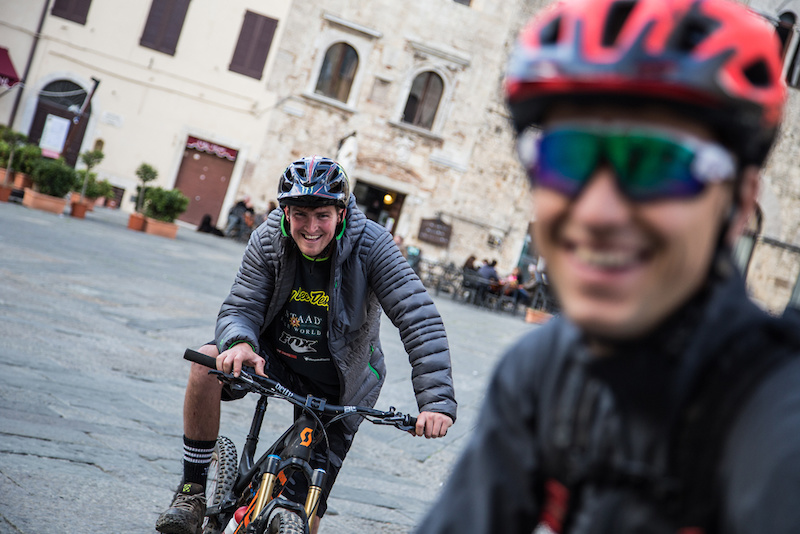 As we all know, Nino calls the mountainous region of Eastern Switzerland home. In winter time, however, this is not ideal for training on your mountain bike. For years, Nino has been spending time at his father’s home-away-from-home in Tuscany where the trails start just below the Schurter home; ideal. This location is a literal playground for outdoor enthusiasts. Whether it’s mobbing the pickup up the areas steepest hills, riding flowy singletrack down to the beach or laying the hammer down on a dirt bike, this location never leaves you wanting more. The local coffee ain't too bad either. 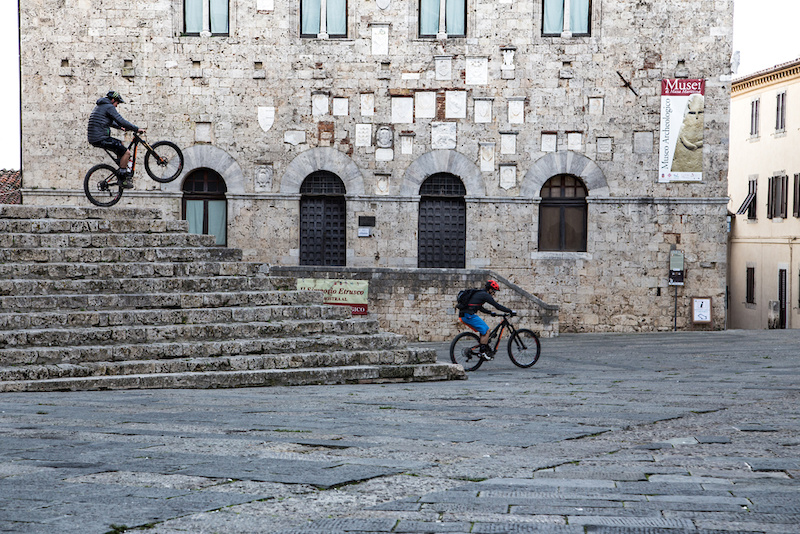 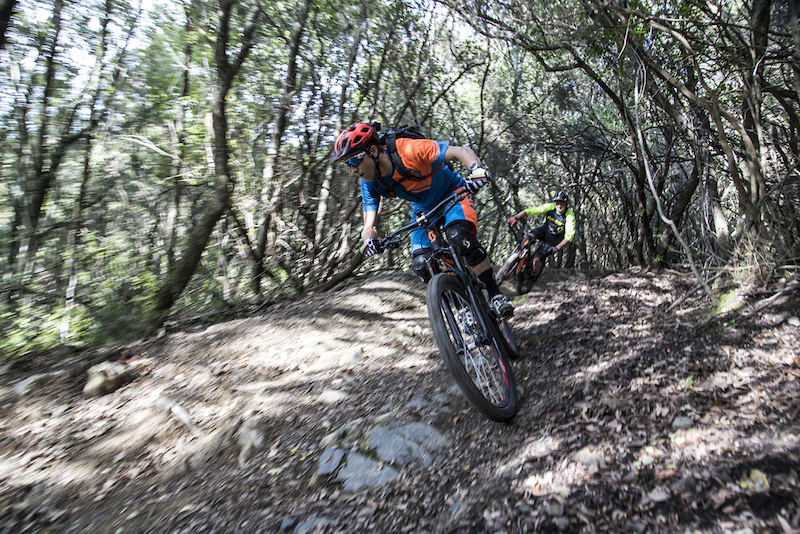 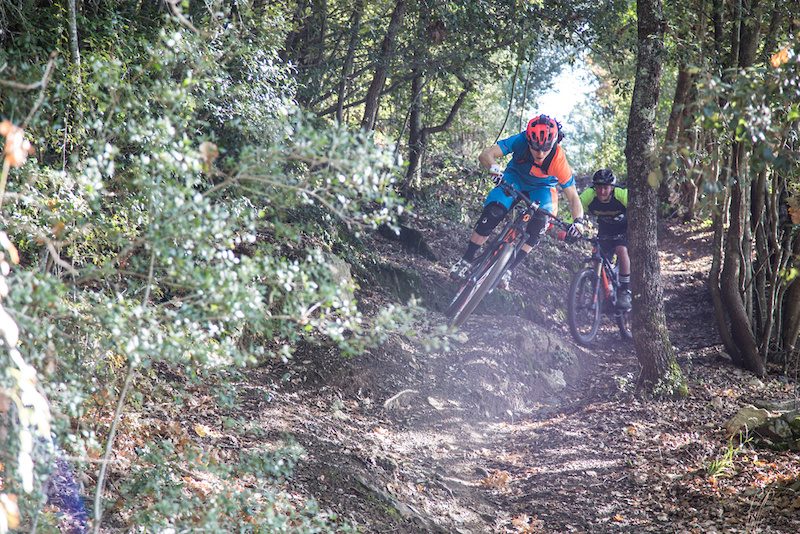 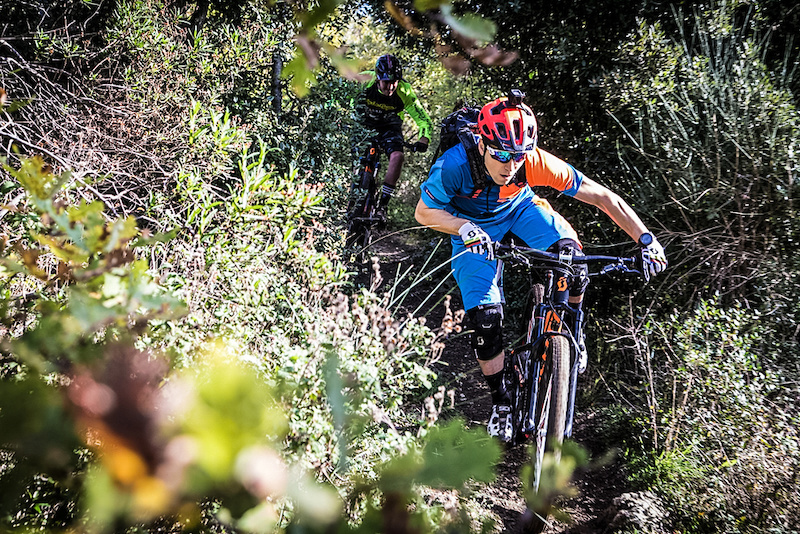 Riding dirt bikes has always been an incredible way to cross train. Though they may both be at the top of their games fitness wise, it only takes a few rips on the dirt bike for the ever pesky arm pump to come into play. Both Brendan and Nino like getting the motos out for a good old shred, though the results aren’t always as precise! 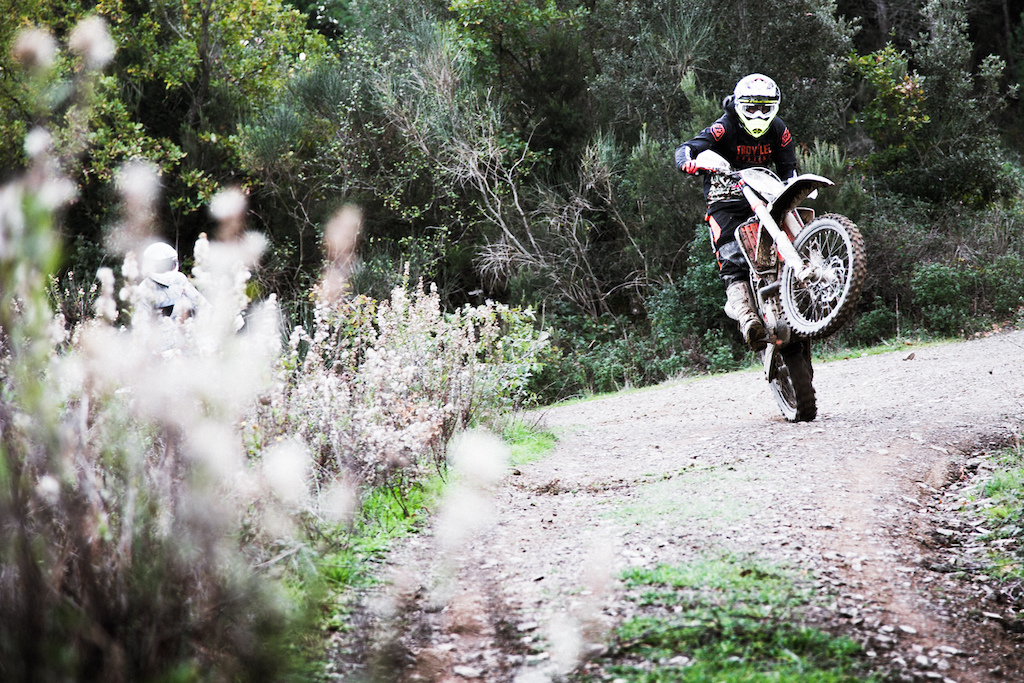 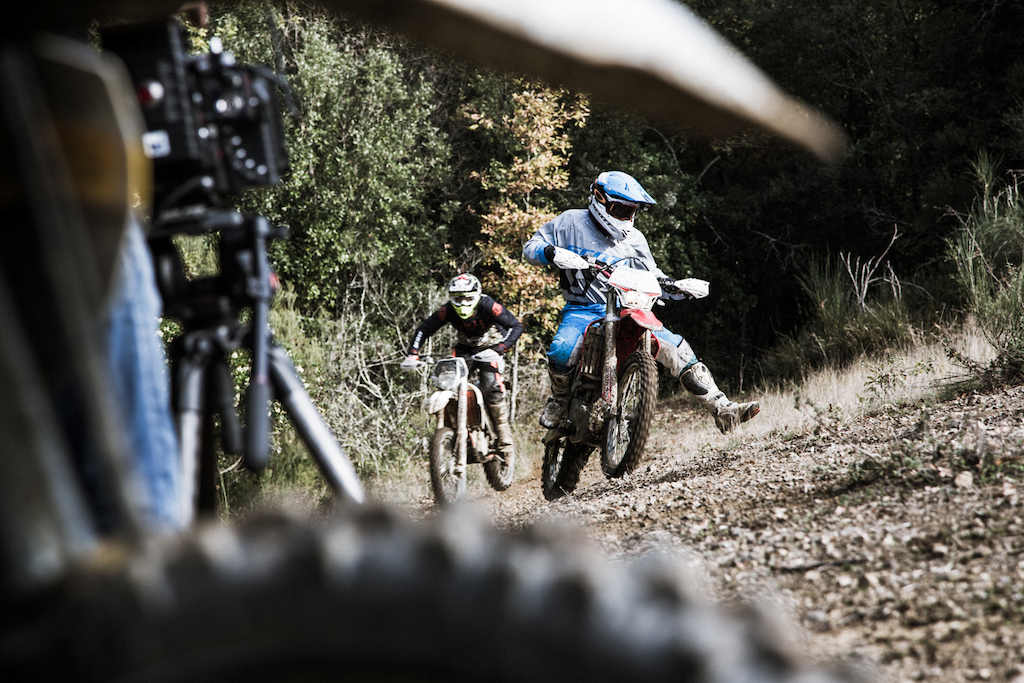 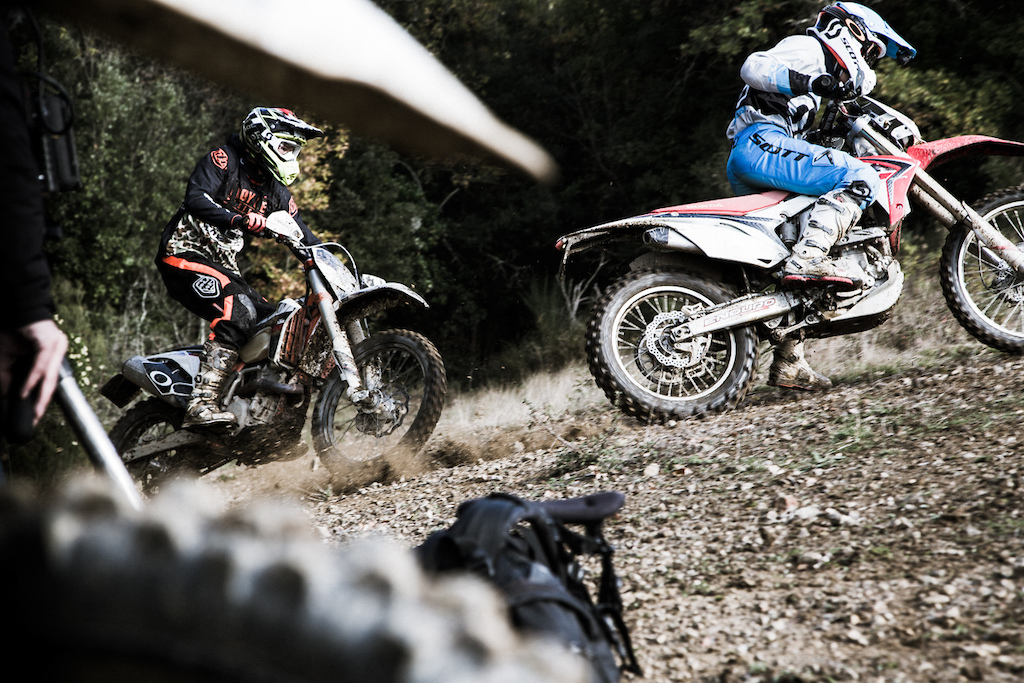 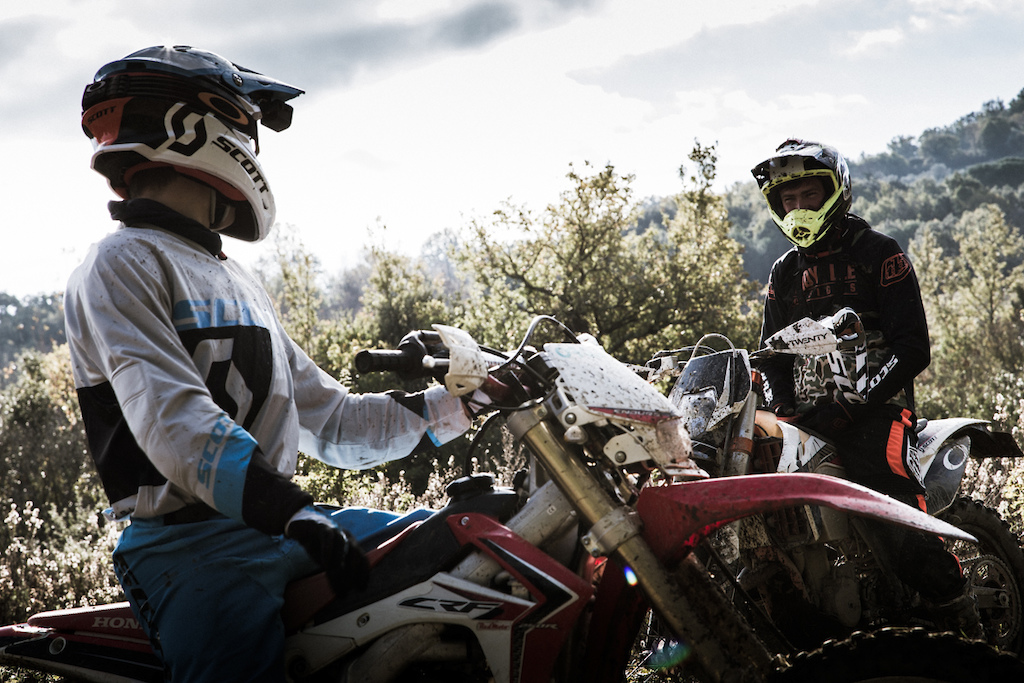 When watching these two ride bikes together, it is clear that they’re having a good time. Inside lines, nose bonks, manuals, you name it - they’re always pushing each other to go a bit faster, turn a bit harder, whip a bit further. At the end of the day, it’s riding bikes. It doesn't matter if you’ve got the World Champion's jersey on or not, there is no such thing as a bad bike ride. Once it's done, you’ll always be happy that you’ve been out for a spin. Stay tuned for more episodes of the #huntforglory.

CHawk68462 (Apr 21, 2016 at 8:44)
If you've watched him race, it's pretty easy to see that he's an amazing bike handler. I'm sure there are a lot of XC riders that would surprise you in how much they are "mountain bikers." Nino's radness just gets more airtime because he's at the top level.

kleinblake (Apr 21, 2016 at 8:46)
@pigman65: nah just stoked, there are plenty of XC racers her who are road riders on Dirt, but Nino is out here just shredding to shred, and riding other disciplines

WAKIdesigns (Apr 21, 2016 at 10:40)
I've been to a World Cup or two. Haven't seen any roadies on dirt there. I've seen guys with saddle all the way up manualin sht, clearing small doubles. I followed Merida team on Park Loypa flow trail in Hafjell and it took me many berms and tables to pass them on my Nomad. All good XCers perfectly understand the benefits of getting skilled at bike handling and availability of skill clinics went up dramatically. It is symmetrical with DHillers recognizing fitness and off bike training. There is less and less folks who believe you just need to ride your bike more to get fit. The last thing XCers need is to get those dropper posts...

bkm303 (Apr 21, 2016 at 12:14)
Agree with @WAKIdesigns .... that "dirt roadie" stereotype might be true in your local Cat2 race, but I've been to a couple WC XC races in person and all of these guys are sick bike handlers. Saw plenty of sub-20lb xc race bikes being wheelied and hopped around near the pits. Plus the speed those guys carry into those techy sections cannot be fully appreciated through a screen. They haul into rock gardens and drops with seats at full extension and stick everything.

trialsracer (Apr 21, 2016 at 14:52)
@CHawk68462: Exactly. The top level (i.e. nationally competitive) xc rider who would not whoop everyone but a pro DHer /seasoned, fast rider (i.e. the pro who isn't pro because he or she doesn't race) on a DH course is, in my experience, the exception and not the norm. Most of these guys can haul ass on downhill, and they will do it in lycra, seat full height and on a 20lb hardtail with 2.1s

Is that a compliment? Because Peter Sagan and Vittorio Brumotti have some trials skills beyond most professional mountain bikers.

alexhyland (Apr 21, 2016 at 14:39)
Was looking for this comment. Surprised Nino hasn't done a round just to see how. Got a feeling he would probably kill it!

pascalchristen (Apr 21, 2016 at 13:06)
I actually loved their different reactions: Nino was a lot more concerned about it than Brendan.

geezracer (Apr 22, 2016 at 14:52)
Makes for a good video spot..However, any logical person would have strapped them down. It is sad that they seem to have no respect for their bikes, why should they care, it's not like they have to spend their hard earned money to pay for them. ...Lame!

LiquidSpin (Apr 21, 2016 at 10:22)
Both of them are incredible riders that have a true passion for riding on 2 wheels. They seem like real genuine friends too and not just 2 people coming together because they ride for the same sponsor.

Another amazing Hunt for Glory video! I can't wait to see the next one~

Matt115lamb (Apr 21, 2016 at 15:08)
About 8 years ago brendan came with us to Essex Mx near London , think it was his first time at a proper track , so I gave him some advice and said " just follow me and you'll be fine " . Within half a lap he done me ! Was whipping on everything and was a blast to follow HIM ! lol

trialsracer (Apr 21, 2016 at 14:54)
I love this! Two of my favorite riders to watch of all time! Wish Neko Mulally would join them sometime, that trio of Scott riders would make a great video.

ermoldaker (May 15, 2016 at 13:29)
There's a lot of comments about Nino coming out well in this vid but I'm really amazed at how well Brendog did considering he grew up in one of the flattest areas of Europe. Good on you and that amazing block pass in the trail B Town

club-roost (Apr 21, 2016 at 8:53)
Sick vid! Traveling to Tuscany region next June! Is this Bandite trail area? Any suggestions would be kickass!

sembola (Apr 22, 2016 at 3:48)
First part is Cicalino trail near Massa Marittima, just off the front door of Schurter family house. Then Cala Violina in the Bandite area.

Oscarider (Apr 21, 2016 at 10:47)
So cool to see an xc rider shred the downhills and moto. Anybody know where the trails in the beginning were?