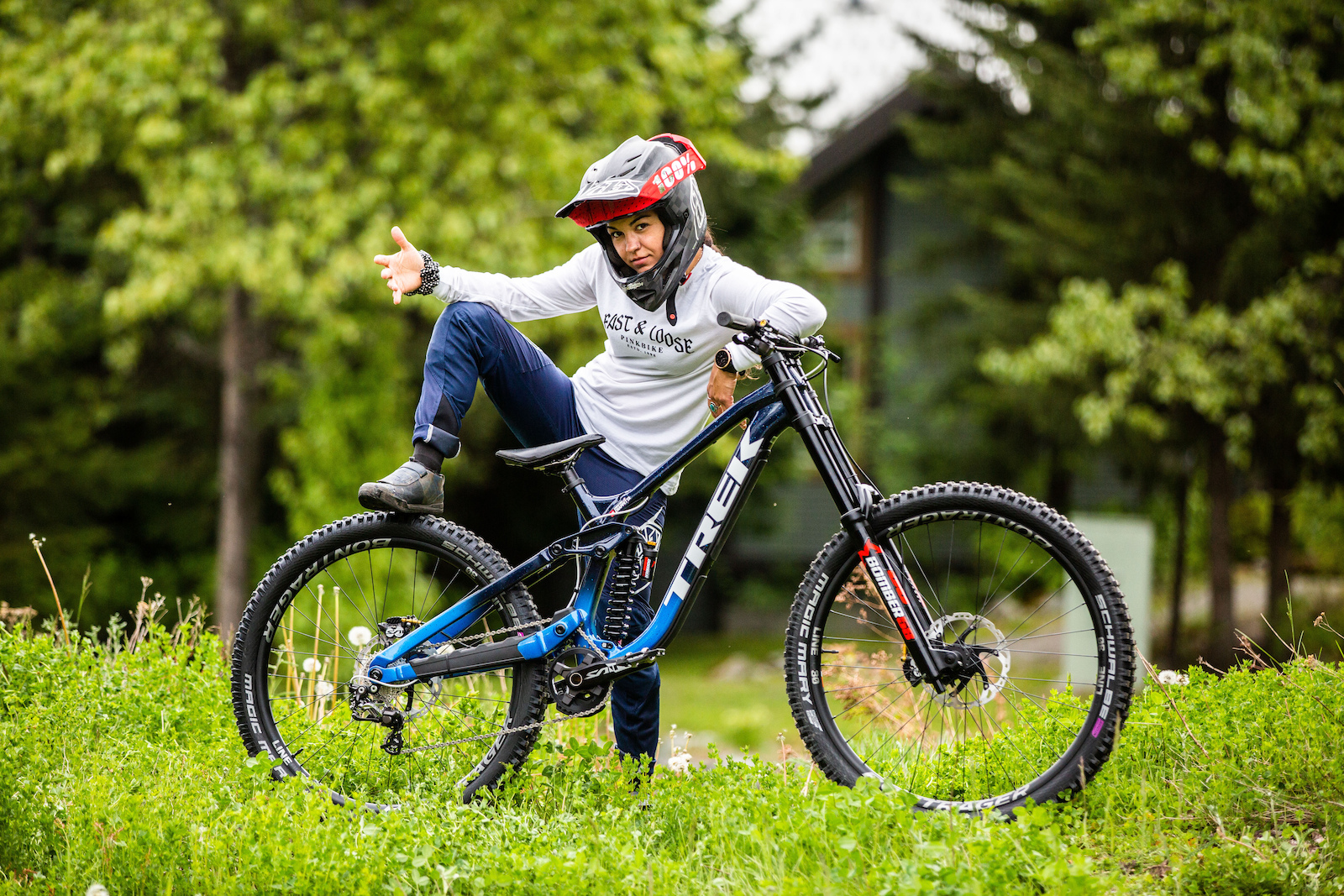 BIKE CHECK
Christina Chappetta's
Trek Session
Pinkbike presenter Christina Chappetta has been riding the Whistler Mountain Bike Park for almost a decade now and it was the main reason she moved to Whistler from Colorado at the age of 22. In fact, if you watched our Getting to Know video with her earlier this year, you'll know that she lived in a tent for almost two months when she first moved to Whistler because she was so committed to living in the resort town.

Christina knows her race lines and is a competitive racer; she came 6th at the Whistler EWS in 2018 and regularly wins the Whistler Phat Wednesday races, but she also has mad style on the bike and loves sending the huge jumps on A-Line and Dirt Merchant.

Recently, Christina got a new rig to ride the park with, so we thought it would be a good time to go over the details on it. Her Trek Session, which she's named "Starry Knight", is a size small and she's set up as a mullet. 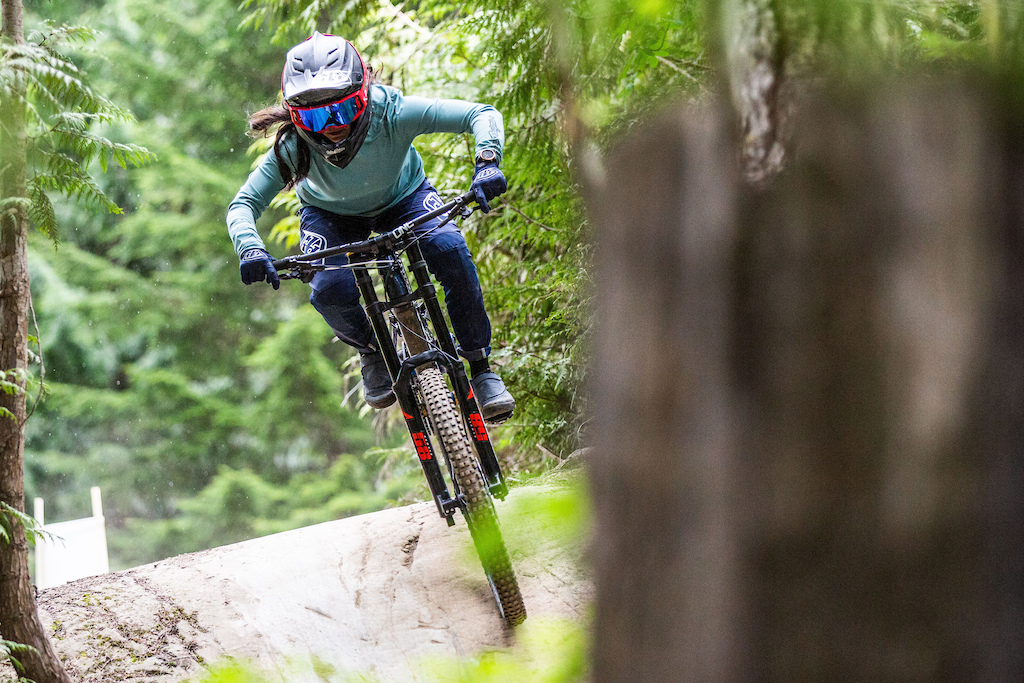 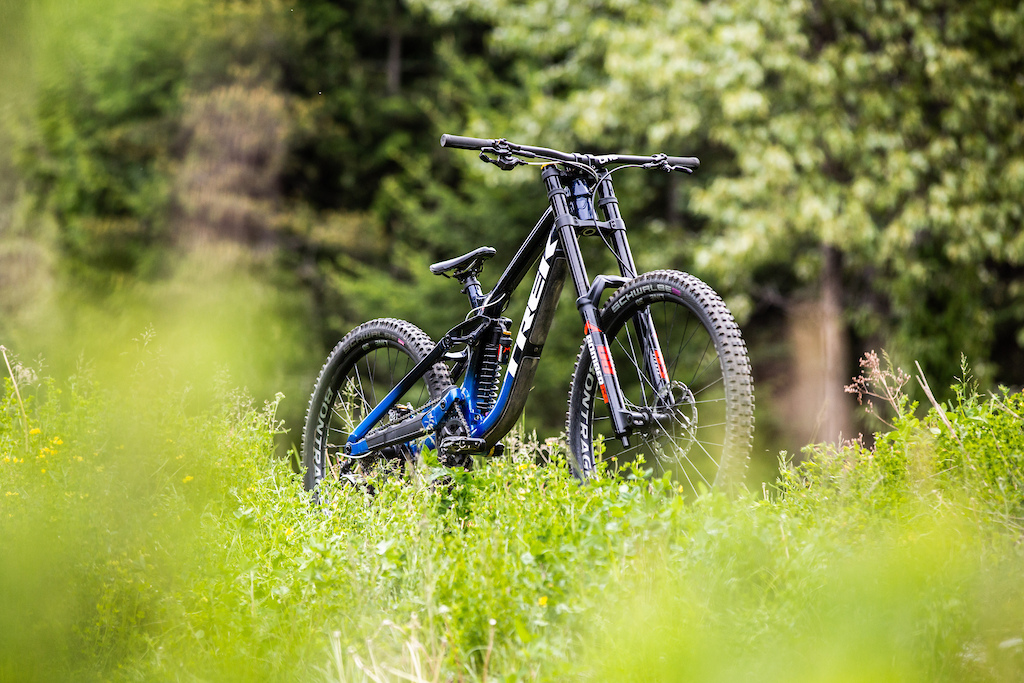 At 5'4" (162cm), Christina is riding a size small Trek Session with a 29" front wheel and a 27.5" rear wheel. Christina was riding a medium in the previous version, but since this new version is bigger overall, Christina decided to go back to a size small. She says she's loving the space in the cockpit, but it’s still nimble enough to throw around jumps. 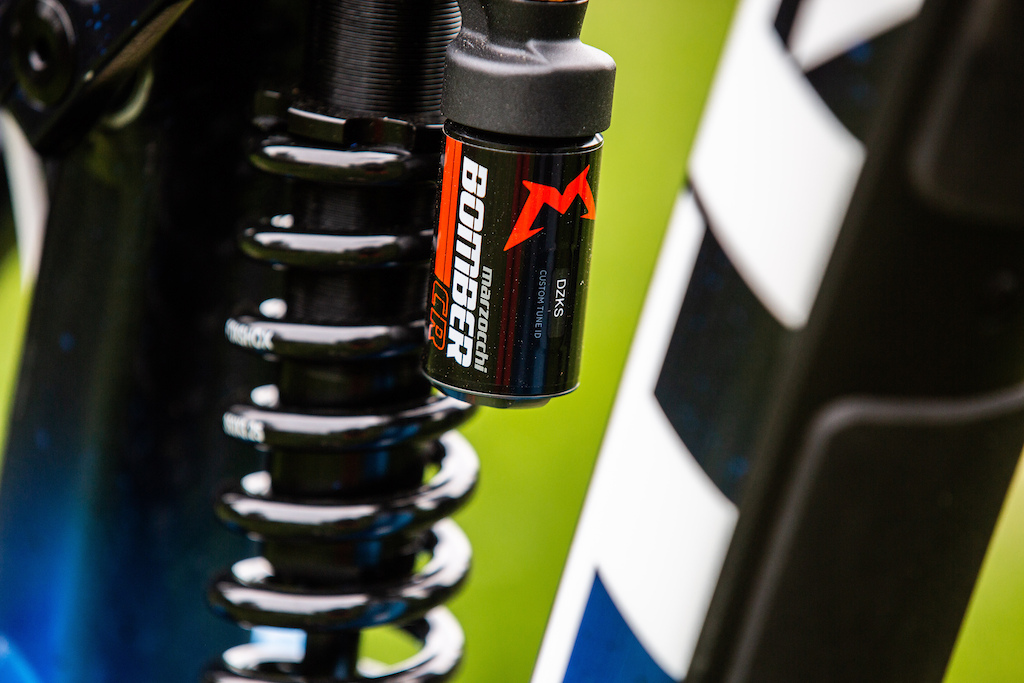 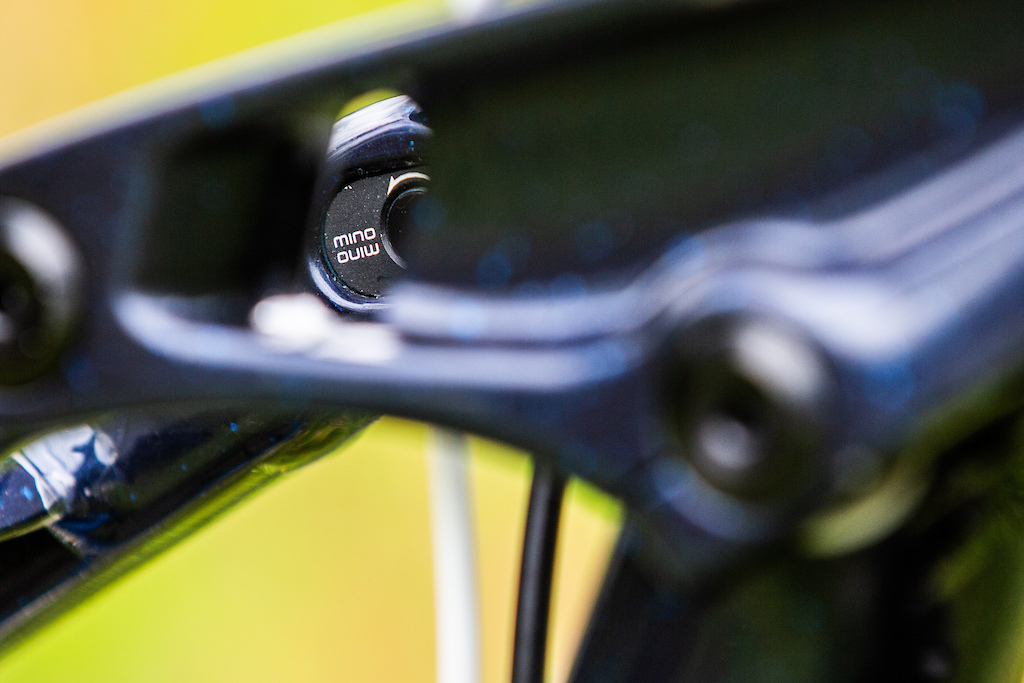 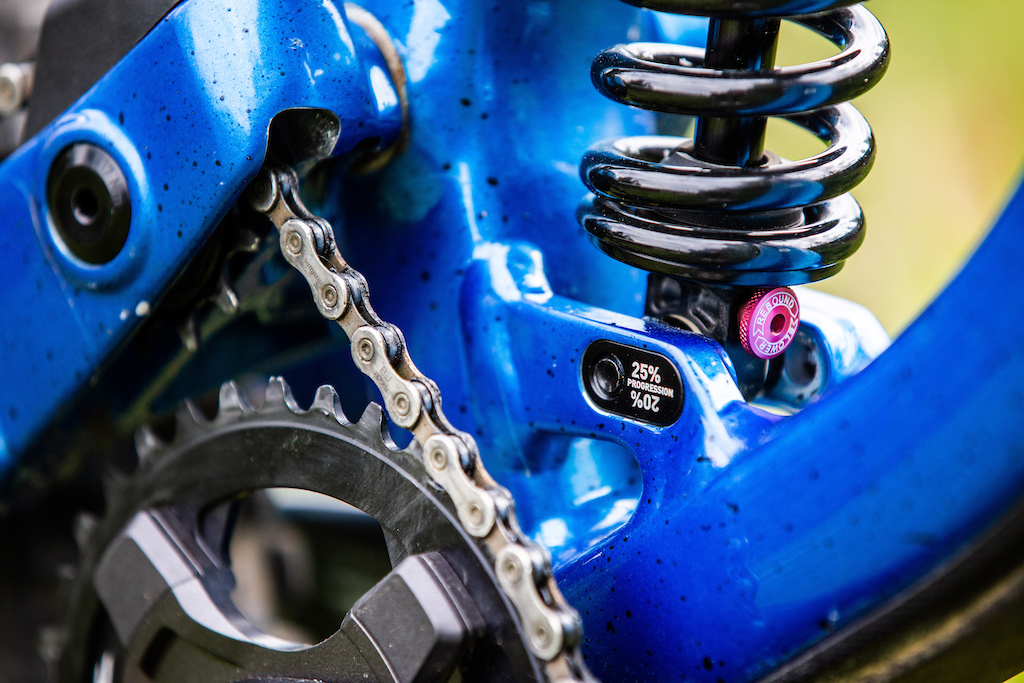 Since the bike is set up as a mullet, Christina put the Mino links in the high BB setting and set the progression suspension chip to 25% to compensate for the smaller rear wheel. She says the set up has been working really well with the coil shock in the bike park. 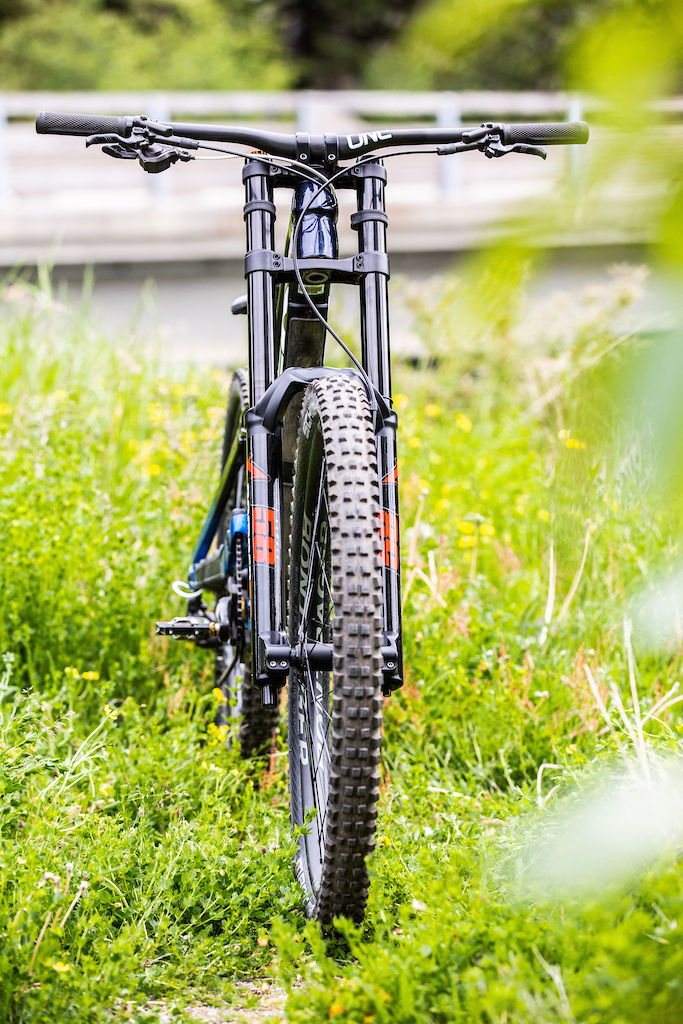 Christina rides Schwalbe Magic Mary in the Super DH casing and ultra soft compound. The front tire is a 2.4" and the rear tire is a 2.35". Christina doesn't ride tire inserts. Her tires, which are set up tubeless, have 20 psi in the front and 21 psi in the rear. 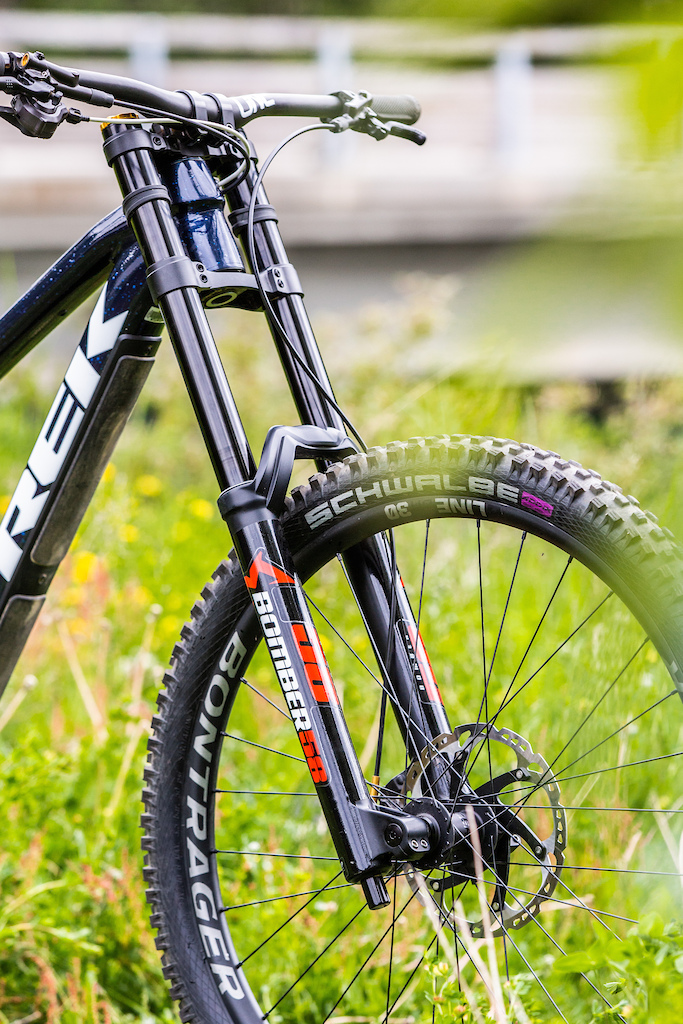 The fork is a 203mm Marzocchi Bomber 58 29r edition that Christina rides with 49 psi and 4 tokens. She has 3 clicks of LSC from closed and 13 clicks of rebound from closed. 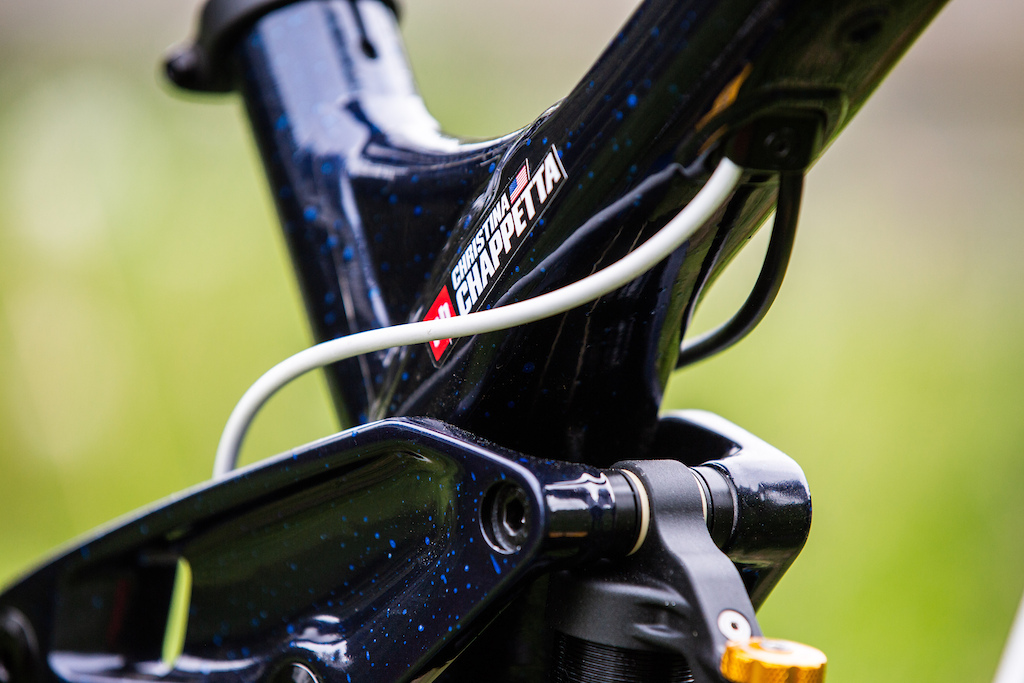 White shifter cables and a name tag are some of the details that let you know who is riding this bike. 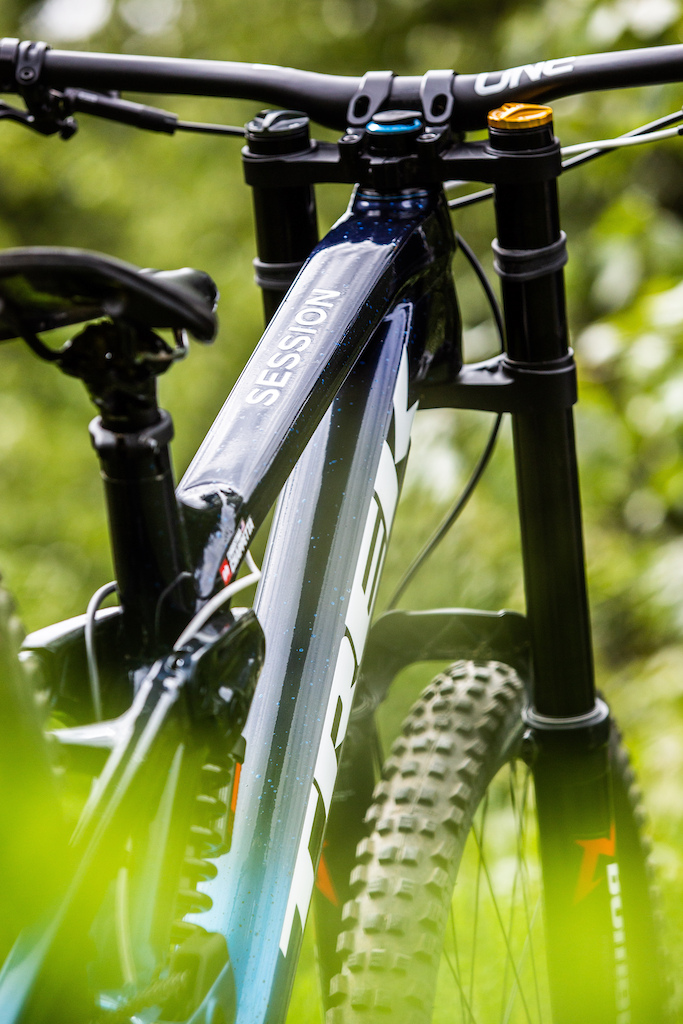 Christina installed the OneUp EDC tool in her steerer tube because park laps inevitably always lead to things coming loose, and if nothing else she can always find people on trail to help out with it. 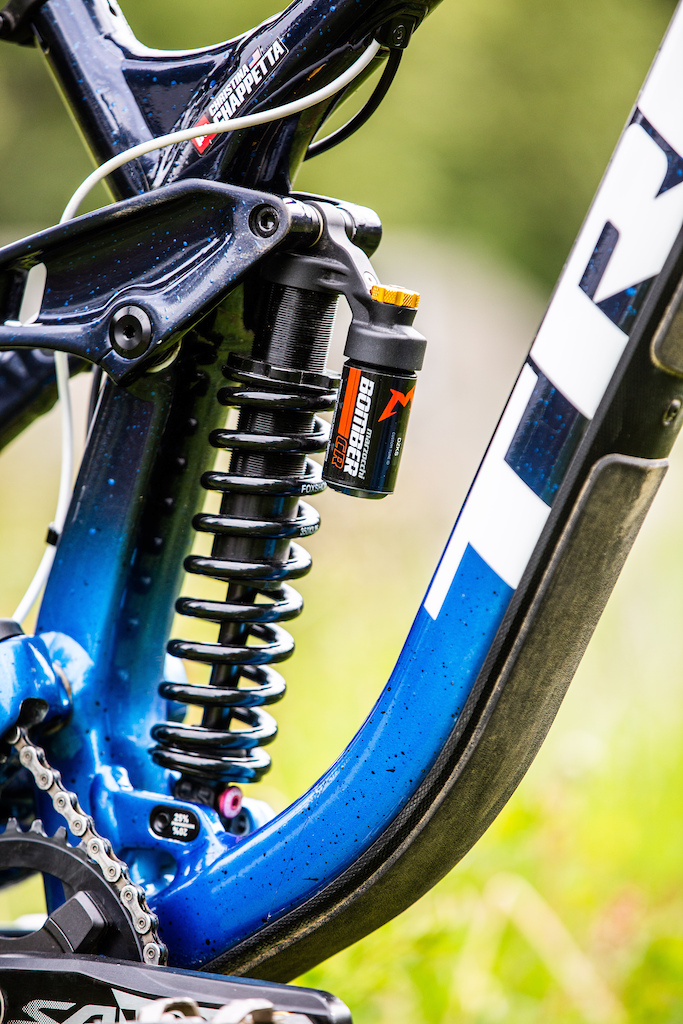 The coil shock is a 200mm Marzocchi Bomber CR. Christina runs a 350lb spring with 4 clicks of LSC from closed and 14 clicks of rebound from closed. 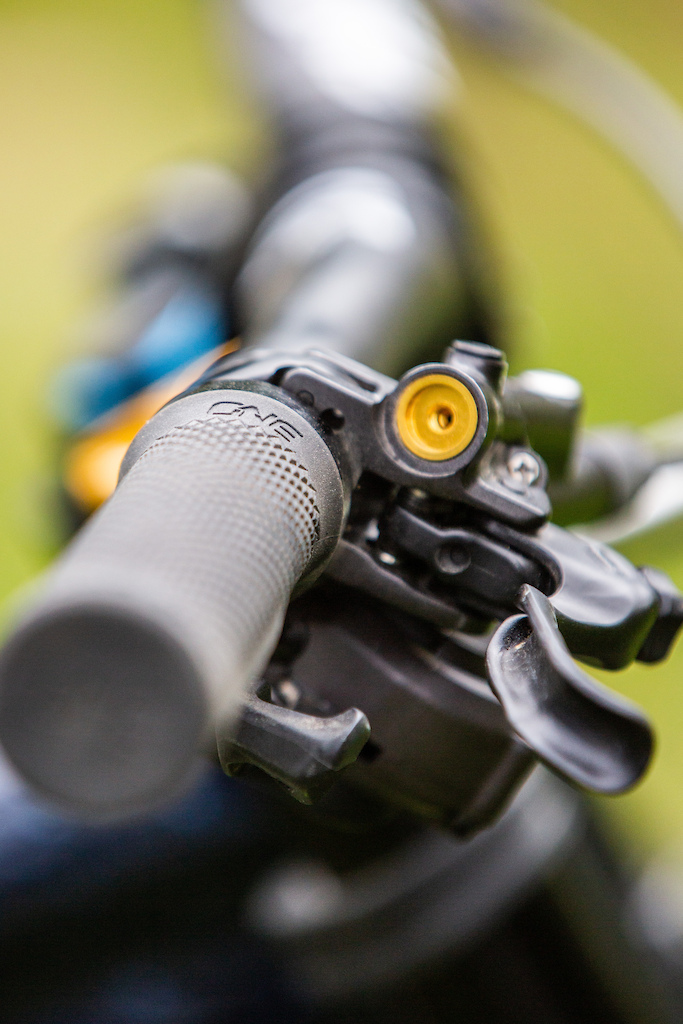 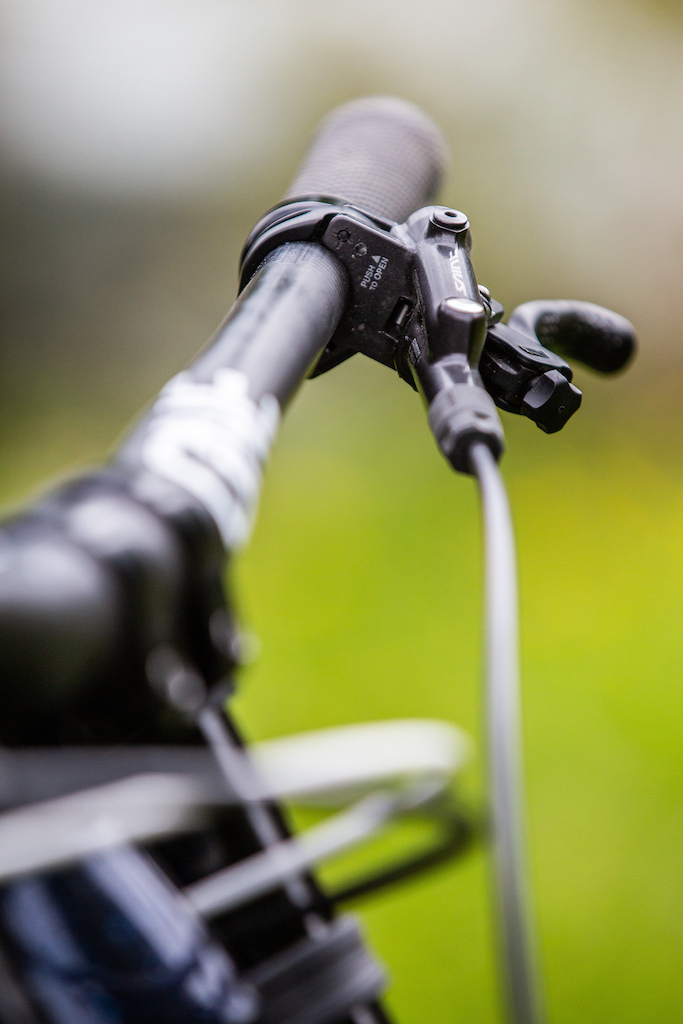 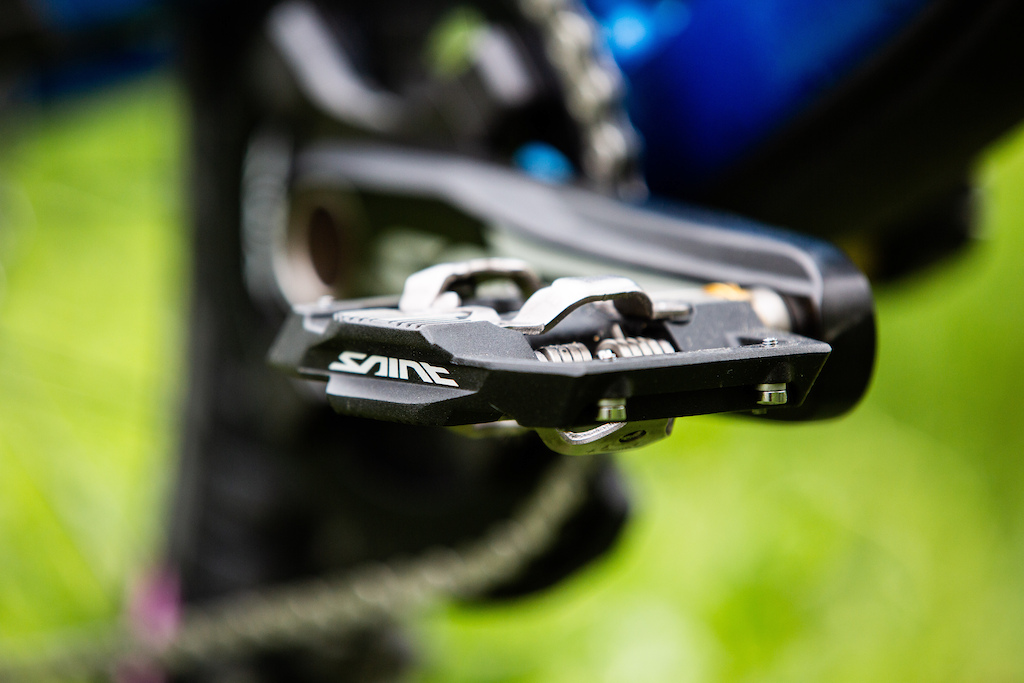 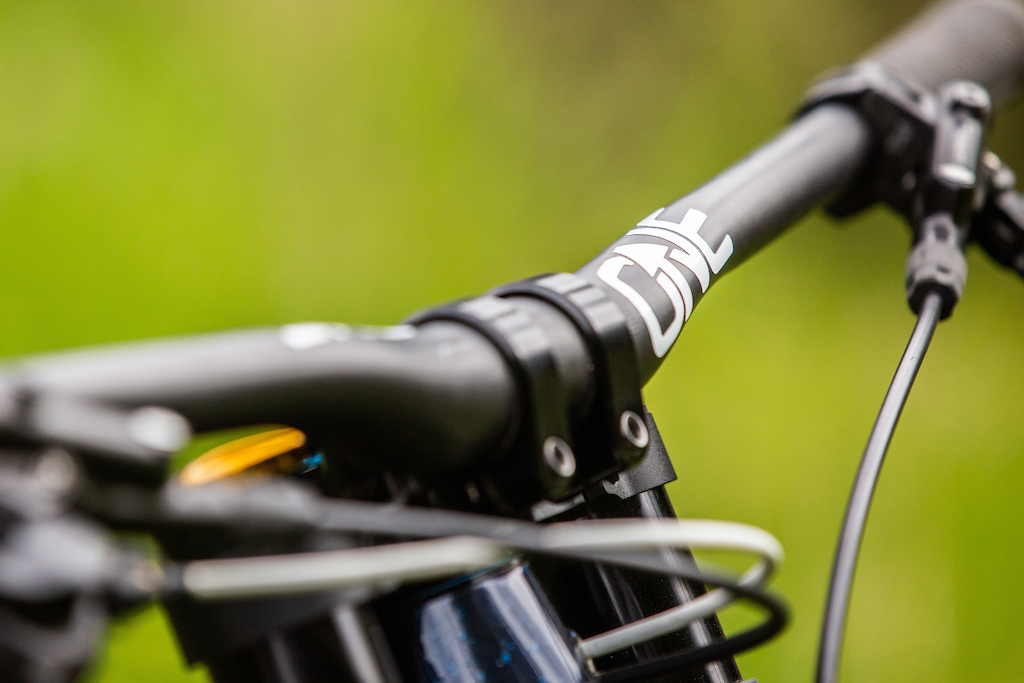 Christina getting sideways on Dirt Merchant.

Cyberhatter (Jun 30, 2021 at 15:35)
there really trying to get their mileage out of Chapetta right now. I feel like it's chapetta.com.

covekid (Jun 30, 2021 at 16:47)
Totally. Could have sworn they already bike checked this bike? If not how is it really different from her Slash aside form a dual crown fork?

pourquois-pas (Jun 30, 2021 at 18:31)
Seems logical. Christina has brought a lot of quality content and personality to the site.

jarretthelesic (Jun 30, 2021 at 20:06)
Christina is one of the best presenters they've had for the last little while. Damn solid presenter and she has fun with it, which is why she was good hire.

mikealive (Jun 30, 2021 at 21:08)
Fair observation. She's also a natural at presenting (or has had good education/training), she rips, and she seems like a genuine person. They can change it to Chapetta.com and I'm still showing up, idgaf. Just splitting time between here and Cathrovision.net I guess.

zachyc (Jul 1, 2021 at 5:45)
Don't mind that at all. She seems awesome. As everyone else has said she's a great presenter, an absolute shredder and an all around real chick. I really enjoy Levy's personality but we haven't seem much of him lately. Christina is filling the Levy sized hole in my heart. Keep 'em rolling PB.

kmtpdx (Jun 30, 2021 at 16:26)
How is the high pivot for jumping? Listening to the podcast and reading other articles and comments, I come away with the impression that high pivot's are not as good for jumping because of the rearward travel on the back wheel.

Would be interesting to hear your comments on how it jumps vs last years Session.

christinachappetta (Jun 30, 2021 at 20:05)
It's been pretty great! Riding everything in the bike park and love taking the dh bike out for laps over anything else so no issues there whatsoever. I did love the previous Session but this one is quite different and I'm loving the ride.

thepwnstar39 (Jun 30, 2021 at 22:05)
@kmtpdx I suspect the benefit for square edge bump compliance is probably a greater net gain overall than the "poppy" feeling you might lose a little bit of on jumps, which probably does make for a better complete experience. Of course if you ask any Trek sponsored rider about this they're going to say that the new bike is "good all around" though lol.

ThunderChunk (Jul 1, 2021 at 14:08)
Can't speak for the session but I have a 2021 supreme. It is far better at jumping compared to my old 2015 gambler. I'm really surprised at how effortless it is to pop and how easy it is to get in the air. I'm running a super deluxe shock so maybe the air shock has something to do with it being a bit more playful.

sledMXer (Jun 30, 2021 at 17:04)
My wife is about the same size, and wants a DH bike, but Trek is all sold out of Sessions for the year, and maybe into '23! She's only 107 lbs, so air sprung F/R is probably better for her, and the Session is about the only choice. It's sizing is a bit smaller too, as she usually rides an XS in her other bikes. I would love to find a shop that has a small in stock somewhere if anybody knows of one.

sledMXer (Jun 30, 2021 at 22:53)
@nermol: her last DH was a Wilson with the lightest coils we could get front and rear and she usually only used half the travel. She rides well, she just doesn’t weigh much! Her Mach 6 is set up well and she uses most of that. Thanks for the suggestions.

nermol (Jul 27, 2021 at 10:39)
@sledMXer: sorry for the late response. I’d look at Super Alloy Racing for the rear spring. Wife has a 250lbs on her glory a couple years ago. Even if she can’t use all the travel quality travel is more important. Steve at Vorsprung has a great video on that topic a while back.
Also at that light of spring rate (air or coil) you will likely benefit from a custom rebound tune.

mapleroo (Jun 30, 2021 at 19:22)
As a vertically challenged rider (5'6) experiencing 29er butt buzz on steeper trails I say bring on the mullets! Interested to hear how you feel this one compares to the 29 version Christina

christinachappetta (Jun 30, 2021 at 20:07)
I've yet to try the 29'r version bc I LOVE this mullet setup! I do notice after a few days of only park riding, when I hop back on the Slash I am quickly reminded it is full 29r haha so yeah, some adjusting but worth it. I plan to try the full 29 on the Session soon.

imnotdanny (Jun 30, 2021 at 18:06)
@freeridejerk888: they would ride their stuff because they're sponsored or because it's cheaper

imnotdanny (Jun 30, 2021 at 18:38)
@freeridejerk888: I haven't but I'm wondering why you're comparing a cheaper fork to a much more expensive one. Obviously the fox factory is going to be better performing than the rhythm damper.

freeridejerk888 (Jun 30, 2021 at 18:45)
It’s 300 for a way better lowers and damper. Wouldn’t call that much cheeper. And even less when going from fox to marz in Single crown. Suspension makes a world of difference and I hate that fox rewlly puts out crap untill you get the high end stuff @imnotdanny:

bananowy (Jul 1, 2021 at 2:24)
@hmstuna: I'm a bit confused by Fox's lineup; which versions use the Fit damper? Performance? I know Rythm uses something basic (old GRIP?), Perf. Elite and Factory use GRIP 2. Just unsure about the mid range.

If that's the case, would you say e.g. a Fox 36 Rythm would be better than 36 Performance?

Is the goofy pic with the bike mandatory now, ironic or just plain goofy? I am too old and uncool to tell anymore