The Pinkbike Hot Lap is our own fun leaderboard of pros and bike industry friends. Riders put their best foot forward down a trail local to Pinkbike HQ and their time is recorded with a Freelap timing system.


Current World Cup racer vs ex World Cup racer. Who would come out on top? You probably already know by now from watching Claire Buchar's Hot Lap, but let's see where mistakes were made and where gains were had.

The trail used is called Credit Line. This was chosen as we consider it to be a pretty complete mountain bike trail that tests various riders' skills. 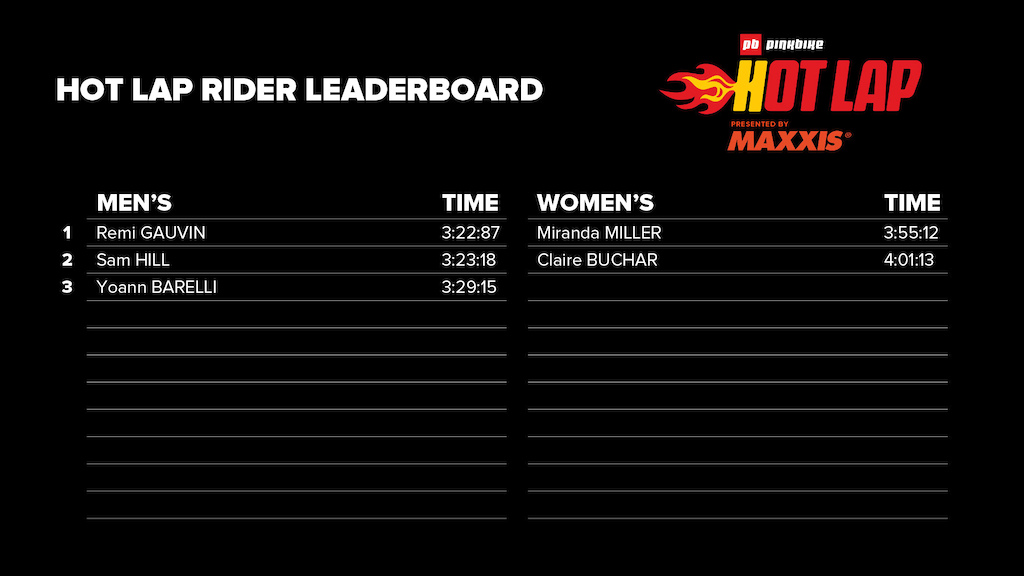 PREVIOUSLY
Did you miss previous episodes of Pinkbike Hot Laps?

Yoann Barelli
Who would you like to see take part? Leave a comment and let us know!

jclnv (Nov 18, 2018 at 17:37)
@viatch: Just give her a couple weeks to get used to a bigger bike. Same goes for EWS races. Shes so genetically strong, where these guys are making mistakes becausethey're in oxygen debt, she'll be cruising.

WAKIdesigns (Nov 18, 2018 at 21:46)
I think she’d have a chance on these two. However of Ceciclle R or Rachel A would come, it would be a controlled demolition... with all the respect and sympathy

WAKIdesigns (Nov 19, 2018 at 13:17)
@endlessblockades: yeah he would totally win with Nino if the track was physical enough! Negprop me all you want!

WAKIdesigns (Nov 19, 2018 at 14:32)
@jclnv: hey, some lunatics gave me sht for not believing in Nino against Sam Hill on Enduro stage and you’ll mock me for Sagan vs Nino? Where is coherence?

Dropthedebt (Nov 19, 2018 at 17:08)
@IntoTheEverflow:
Jolanda Jeff will most definitely NOT suffer from a lack of bike control.

WAKIdesigns (Nov 19, 2018 at 22:36)
@jclnv: I really couldn’t give a less crap what mr Van Der Poel thinks... he is not my childrens teacher, he can believe in Nino, Rowan Atkinson, flat Earth, Mars landing, have a collage of John Tomac and Missy Giove holding hands, both with torn out eyeballs.

According to moat PB XC experts Jolanda is not dominating because the weight of her dropper post holds her back. XCers don’t need one. They say.

clink83 (Nov 20, 2018 at 21:17)
@Dropthedebt: I think in general the top level XC riders probably have as good of bike handing skills if not better than other mountain bike disciplines.

WAKIdesigns (Nov 21, 2018 at 0:27)
@clink83: they are very good and there can't be a tiniest doubt about it but they won't be competitive at highest level. While Jolanda could possibly qualify to a DH World Cup from a get go, Nino quite possibly wouldn't. If he spent a year training and practicing for DH he may probably have a chance but he wouldn't get into top 20 for sure. I don't give him much chances at podium on EWS either. If there was a discipline for descending a Dh track on a XC bike with raised saddle, then Nino would possibly be a top step contender but... there is no such discipline. It's all a half arsed speculation.

Also just because Nino, Jolanda, Emily Batty, Maja are exemplary bike handlers it doesn't mean that rest of the field follows. It's like calling road racers good bike handlers in general based on unique examples of Nibali, Contador or Sagan. Half of them can't nail a brake spot, line through a corner and their body position is all fkd up.

There was a pic of contador on BMX for some event for kids, that you can see on various cycling sites lately and comment boards were booming with lunatics who thought that he would kill it on the track that has no gaps cuz he is so strong. Heh, no...

If top athletes could adapt so well between disciplines without dramatically changing their training regime it would mean those disciplines are worth sht. The reason I said Jolanda would have a chance against those two girls is that I don't think they are the best "the sport" has to offer while Jolanda is in top 3 in hers and possibly best descender there. We can be quite sure that Rachel, Tahnee or Cecile R would easily chop 15secs of these girls runs.

WAKIdesigns (Nov 21, 2018 at 8:13)
@clink83: and what does that prove. i’ve seen that video. Did I ever say anywhere that Nino can’t ride? Do you have a tiniest clue how fast are top downhillers and Enduro guys? What is the difference between a sick edit with Brendog vs race speed of Brendog? And then Brendog to Gwin/ Hill?

vinay (Nov 19, 2018 at 0:28)
I'd like to see some technical climbing instead. Chris Akrigg, Fabio Wibmer, Rick Koekoek, Danny Macaskill... Not the typical "I need a 80deg seattube angle because my climbs are tech, bro" but actual proper technical climbing. Now that would be fun.

Interesting watch, neck and neck at 36s for example baring the slight power off the line, then at 44s there is a 2s gap. One right hander and a little mistake from Claire can make such a big difference.
People wonder with racing how time is made and lost on a track, this is such a good example of how it can be made an lost.
I would bet that on 98% of the track Claire was the same speed, but that 2% makes for a 6 seconds on the clock when you include lost exit speed through the whole next section.

deiru (Nov 18, 2018 at 18:10)
Get some XC racers on track, would love to see how racers from the different disciplines do compared to each other.

imho4ep (Nov 18, 2018 at 12:11)
credit where credit is due, Miranda slayed that, but it's not unexpected, she has been racing way more and a much higher level recently.

WAKIdesigns (Nov 18, 2018 at 14:12) (Below Threshold)
I am going to do it, just have to get there... just wonder how many more Strava lines will appear until then... some people deserve front brake failure

keeqan (Nov 20, 2018 at 15:05)
Also conditions of the trail and recent maintenance play a huge part in the speed you can hit some of those corners! The strava crew can post the top times in mint conditions with some GPS glitches for help but the Freelap and dusty conditions is a nice control!

keeqan (Nov 21, 2018 at 12:20)
@jonnyboy: oh hell yeah. You have to be insanely fast to be near the top on those trails no matter the advantages/disadvantages. So many insanely fast locals and pros coming from all over the world to ride there.

Golden-G (Nov 18, 2018 at 13:07)
I will bet that the sun being so low on the horizon at this time, plays a big role in shadow play/visibility. Also lower temperatures can affect traction big time.

gnarterrorist (Nov 18, 2018 at 22:40)
Was thinking myself, whilst eyes were bouncing back and forth, maybe a small lap overlay with the other rider's dot represented as well as the current rider. Then have it single screen. We can get to appreciate the track, and the riders lines better whilst still knowing where they are compared to another.

That and Pinkbike staff riding it too, not just Adam. ))

HunterMcC1 (Nov 18, 2018 at 23:01)
What’s most impressive is both Miranda and Claire’s times are not as far off the fastest hotlap as 95% of us reading this! Most likely including the PB editorial staff too

TenBeers (Nov 19, 2018 at 9:28)
My untrained eye thinks Claire lost it somewhere between 45 seconds and a minute in, where Miranda took a tighter line and kept speed up. For the rest of the run, the gap looked to stay pretty even. Pretty cool video.

jamesturcotte (Nov 19, 2018 at 18:19)
I think I could do this course and get a respectable 4th place on the male leader board. Most likely a couple minutes off third, but 4th ain't bad when it comes down to it.

bigdan30 (Nov 18, 2018 at 19:02)
Missing sections of trail because my eyes are darting back and forth between the split screens feels like when we do night rides with our lights on strobe.

andrewbikeguide (Nov 19, 2018 at 12:18)
I'd like to see the entire trail as a hot lap so one can see the climbing skills of the riders as well. Great fun watching the best ride this trail. Thanks PB.

cskrypnek (Nov 18, 2018 at 16:44)
I'd love that see Squamish newcomer @coen.skrypnek rrrip the hot lap!
Below threshold threads are hidden