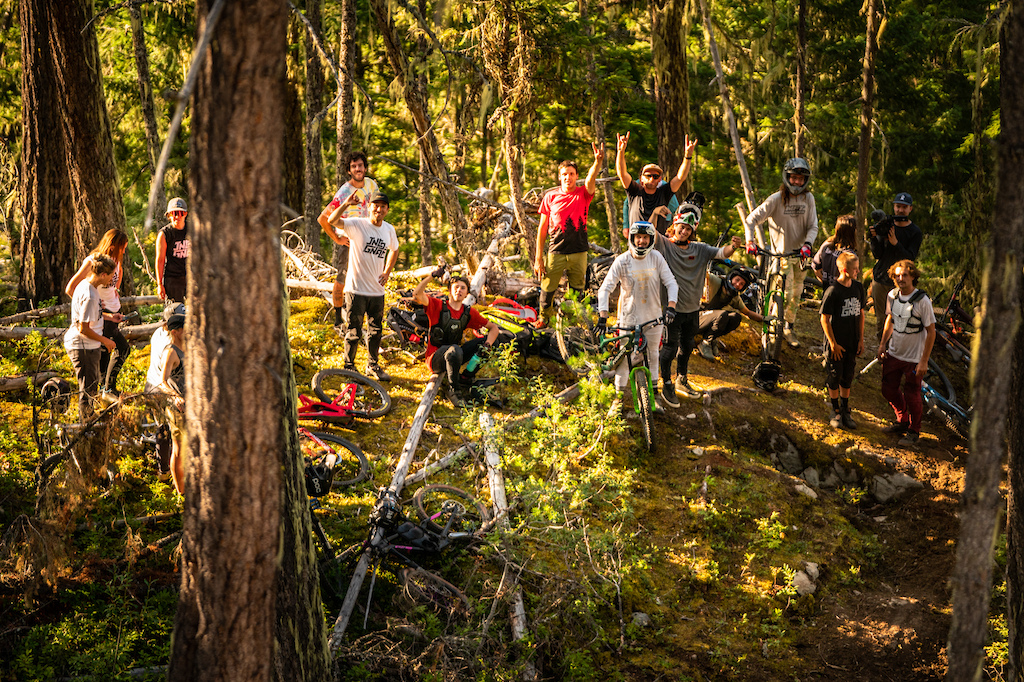 TOUR DE GNAR 2022 - This is your crew !!
For its second edition, we wanted to make the TOUR DE GNAR Gnarlier than ever but also way more inclusive with 10 riders on board. With that many people, the time spent to look, analyze and understand each feature is pretty short, if some riders get sketchy, it will play with your mind, and everything could become a complete disaster... we had no idea it was going to turn that way !!

Steve was the first rider to drop into feature #1 and had a huge crash. We invested plenty of time in taking care of Steve. Of course, the vibe became pretty low, and the reality of the high consequences of these features became unavoidably real. After doing a safety check with everyone in our group, we made adjustments for both the first feature as well as our plan for the day. By the time we arrived in Squamish, the vibe became more dynamic; the day was ON!! 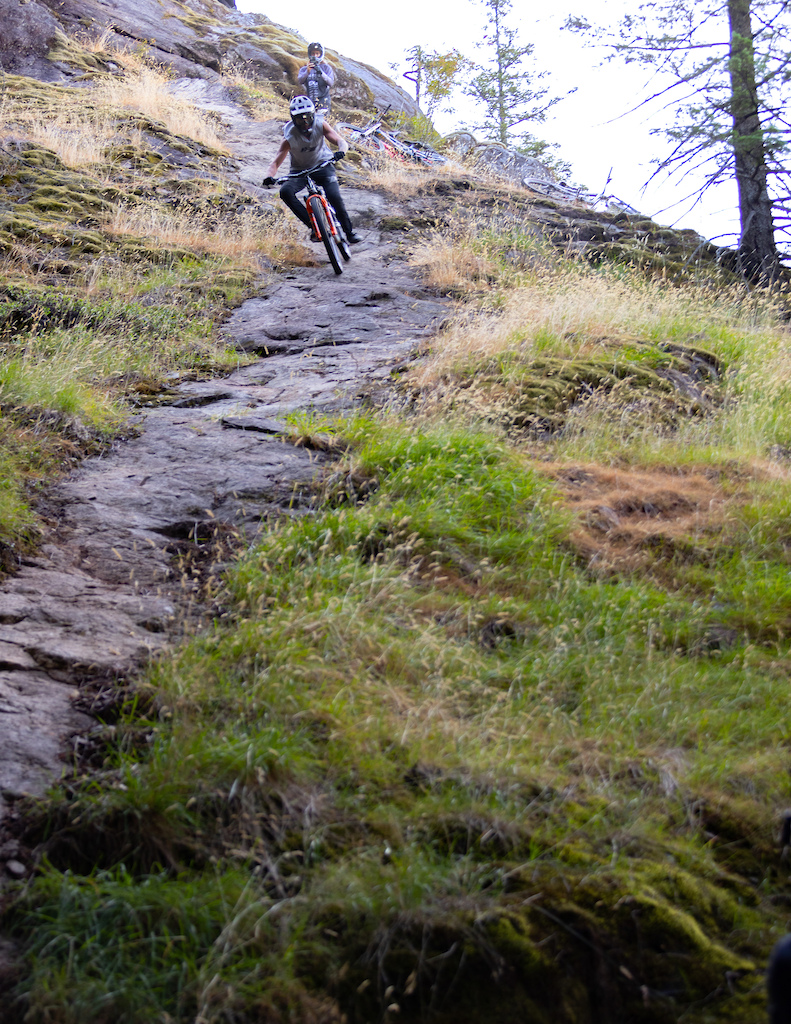 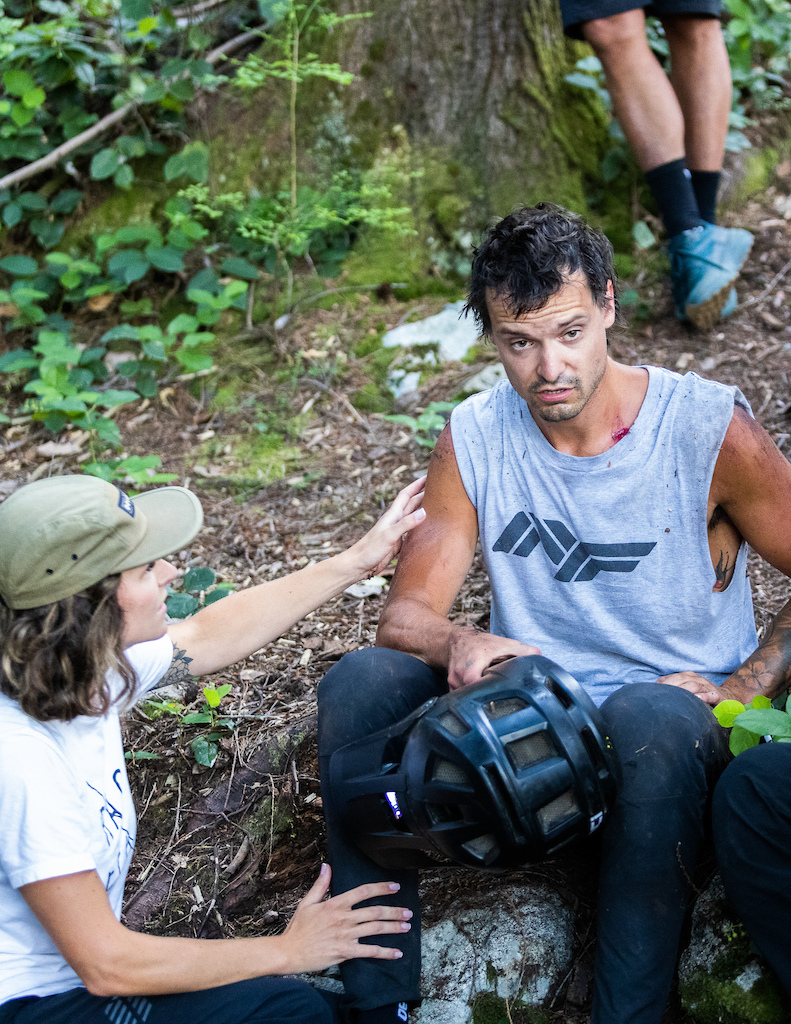 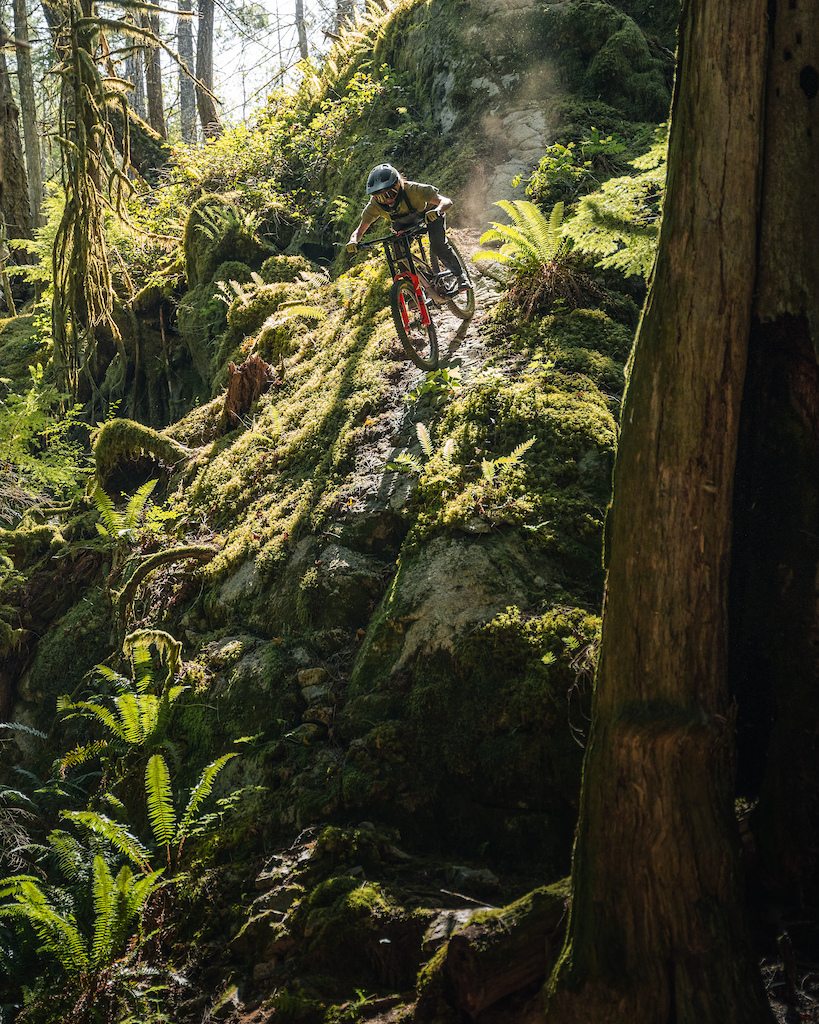 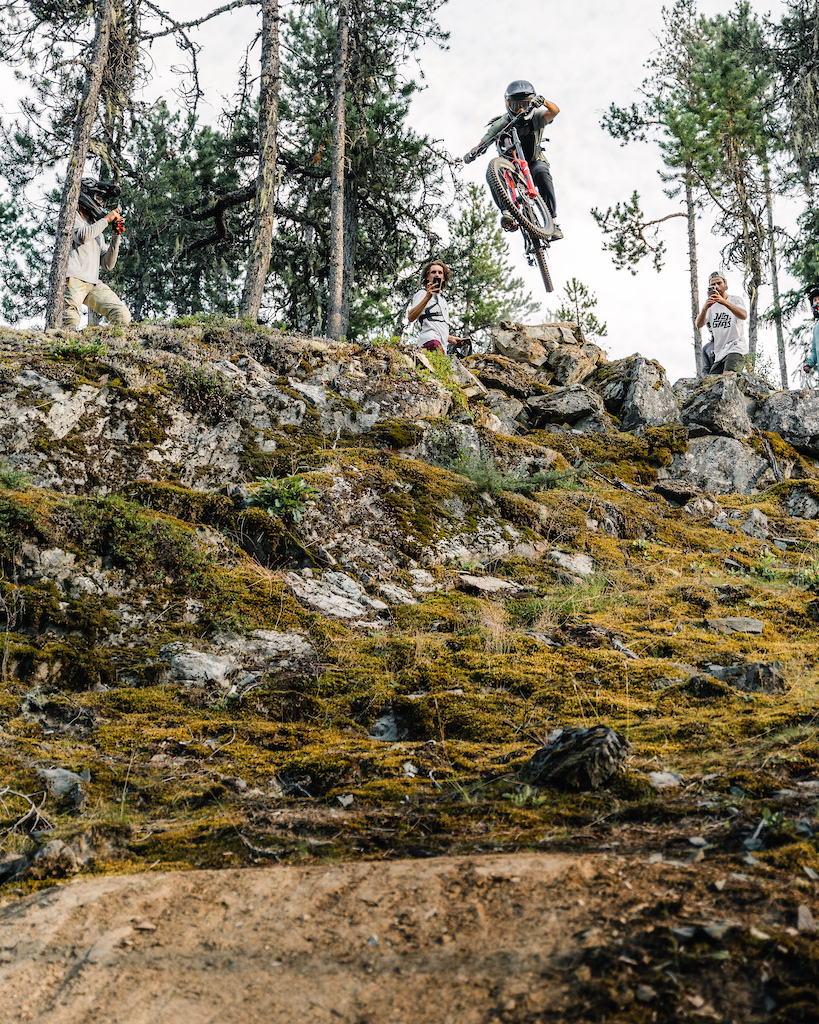 Cami is the first woman to join the Tour de Gnar, it was incredible to watch her !! - Pic Stu Costello ride wrap 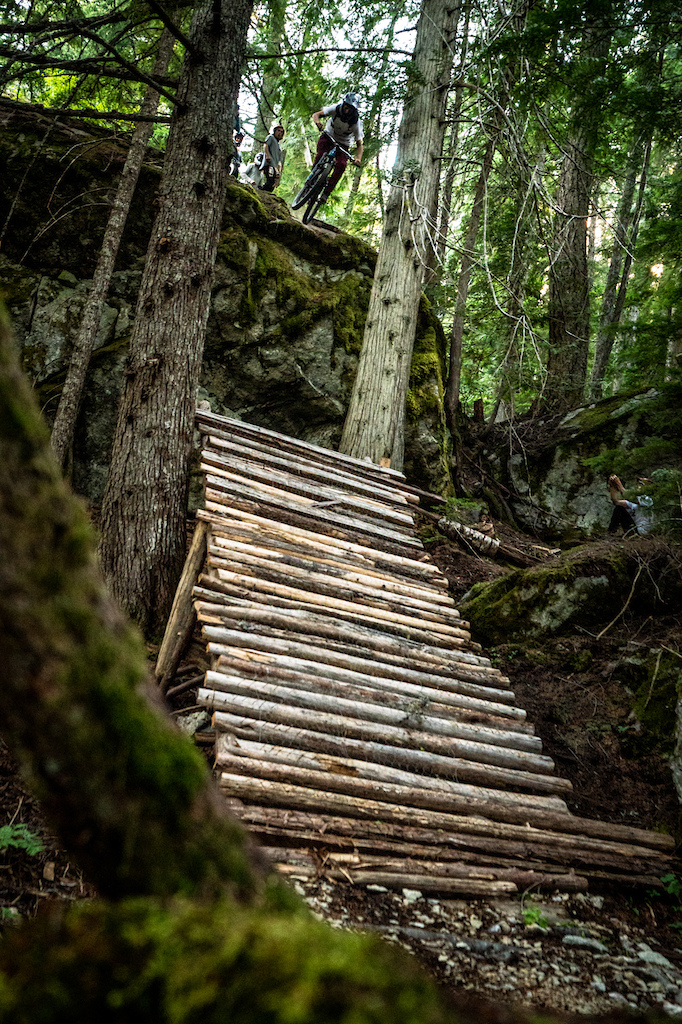 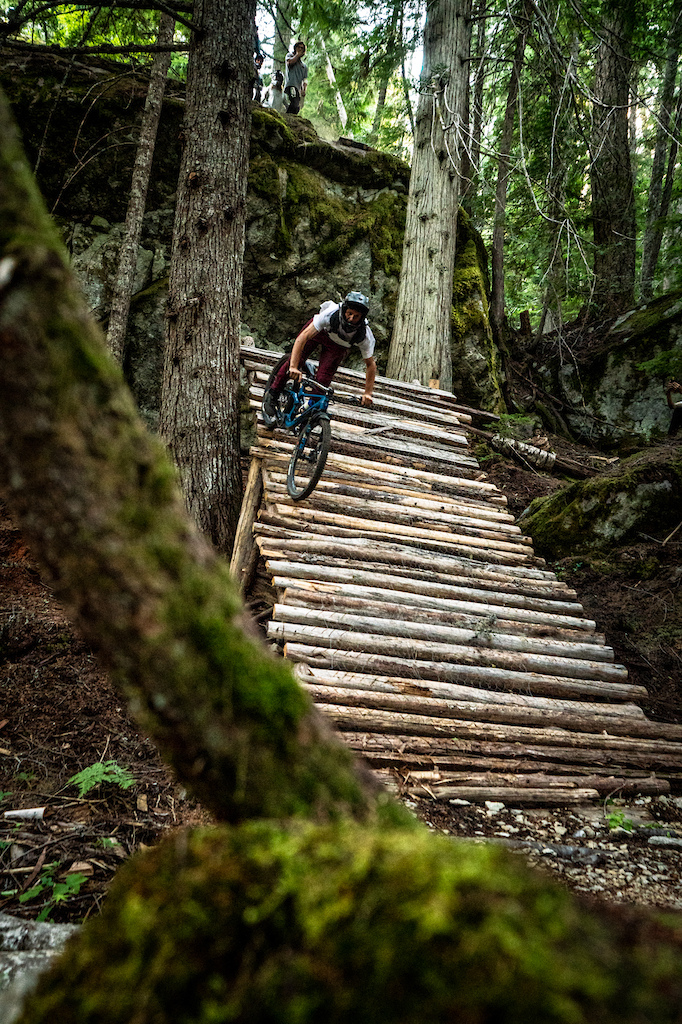 Nate rode every features with such ease and creativity all day, we still don't know if this was on purpose or not haha !! Pic Burke Saunders I9 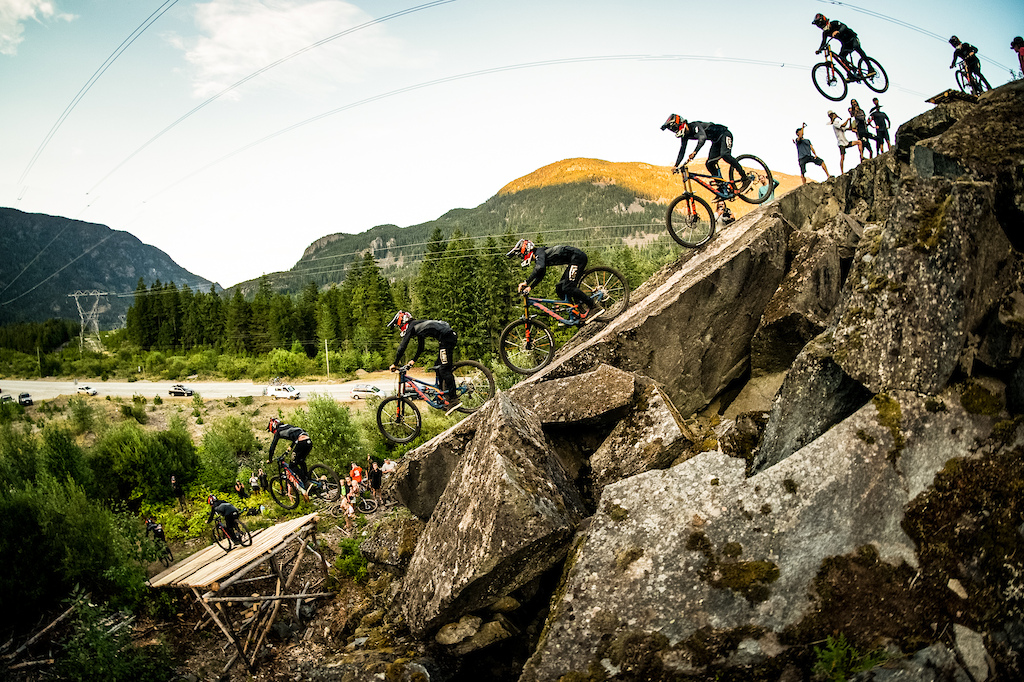 I went home that day, drained after 16 hours in the danger zone but completely fulfilled. It was awesome to witness the spirit of each rider, the encouragement, the support, the love, the send, THE SEENNNNNNNND! It was beyond amazing!

Enjoy the show, everyone 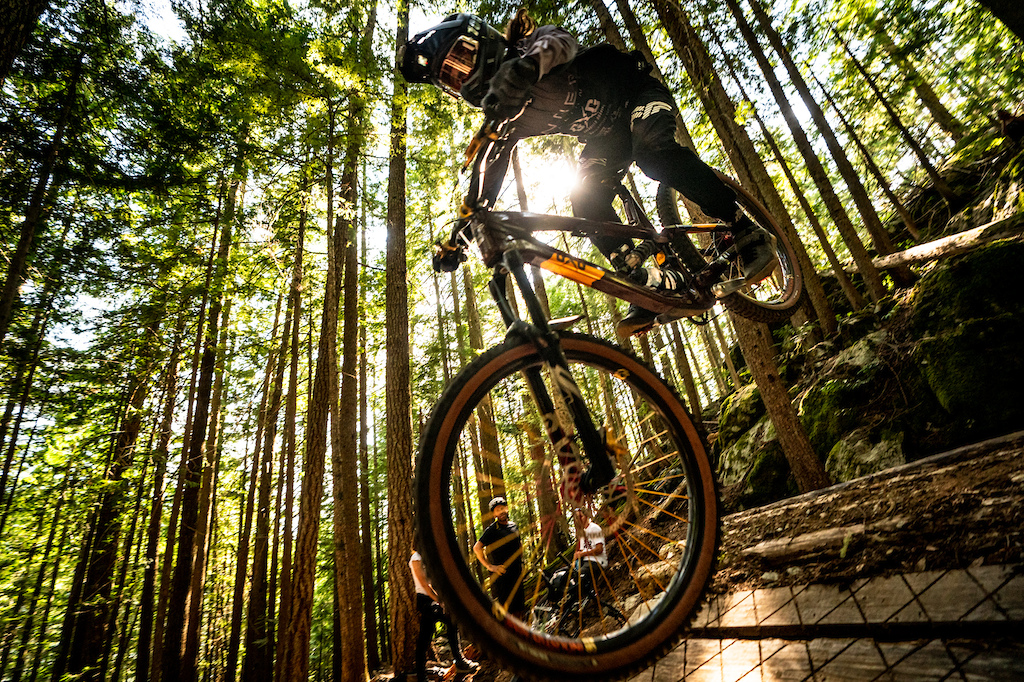 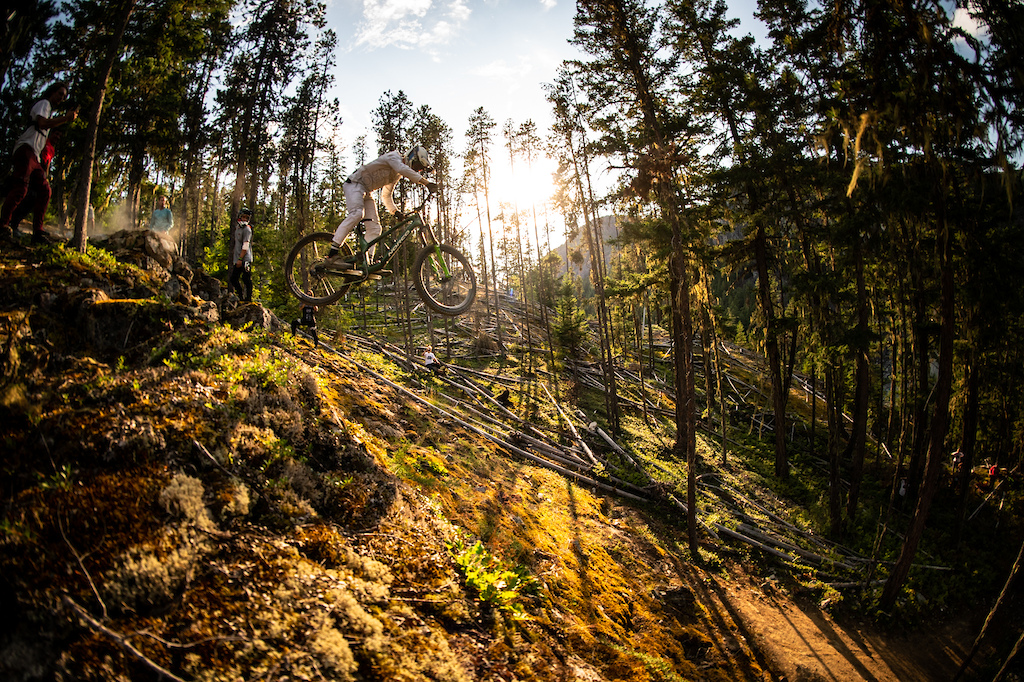 Lewis Buchanan is one of the most stylish rider I know, beautiful to watch
The Tour de Gnar is an underground event is a celebration of Freeride in the Sea To Sky, a way to remember all the pioneers of the early MTB days. We resurrected some old features and created new ones, making this area the perfect playground for progression. 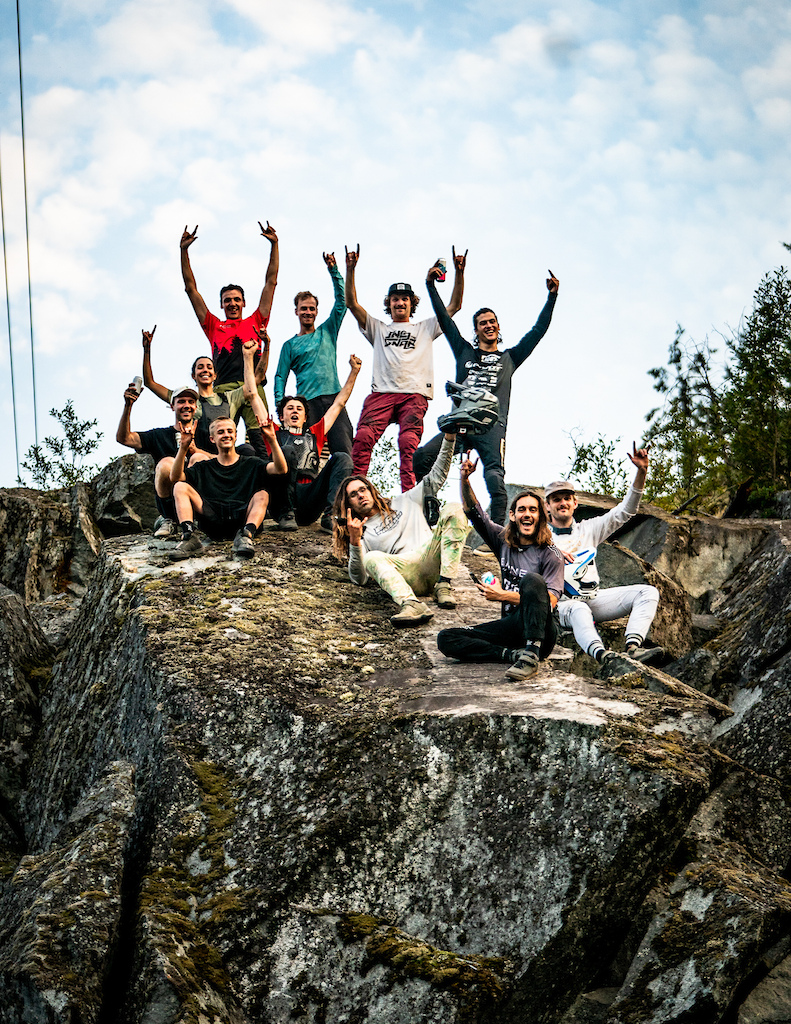 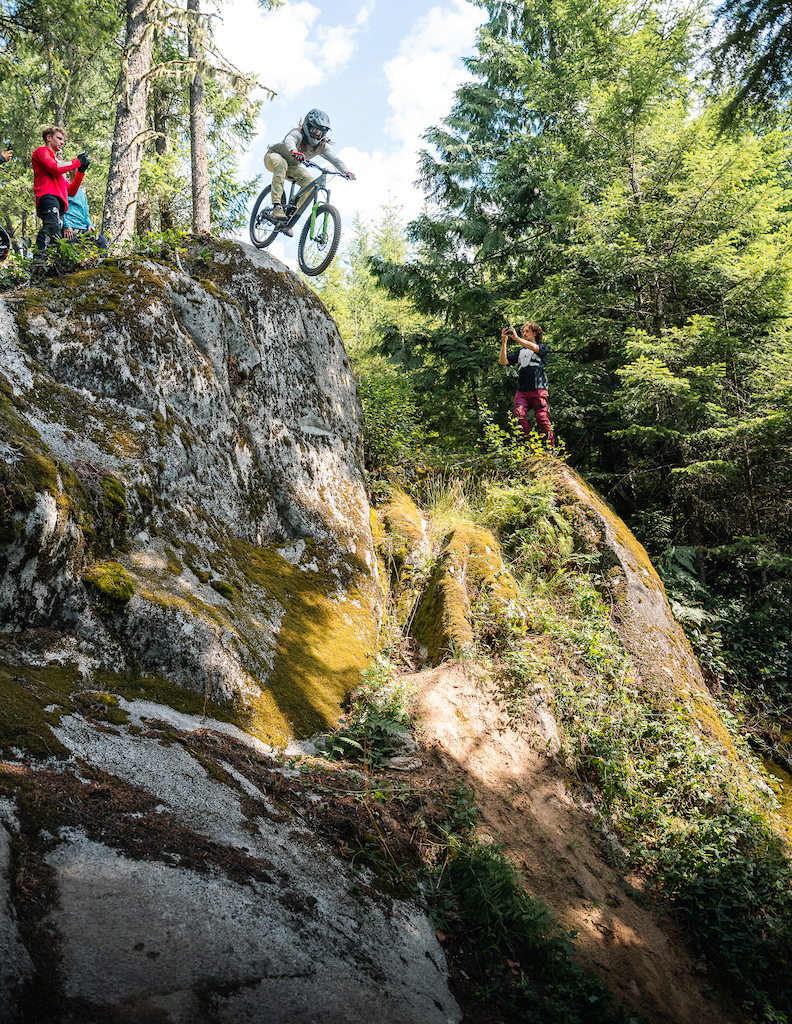 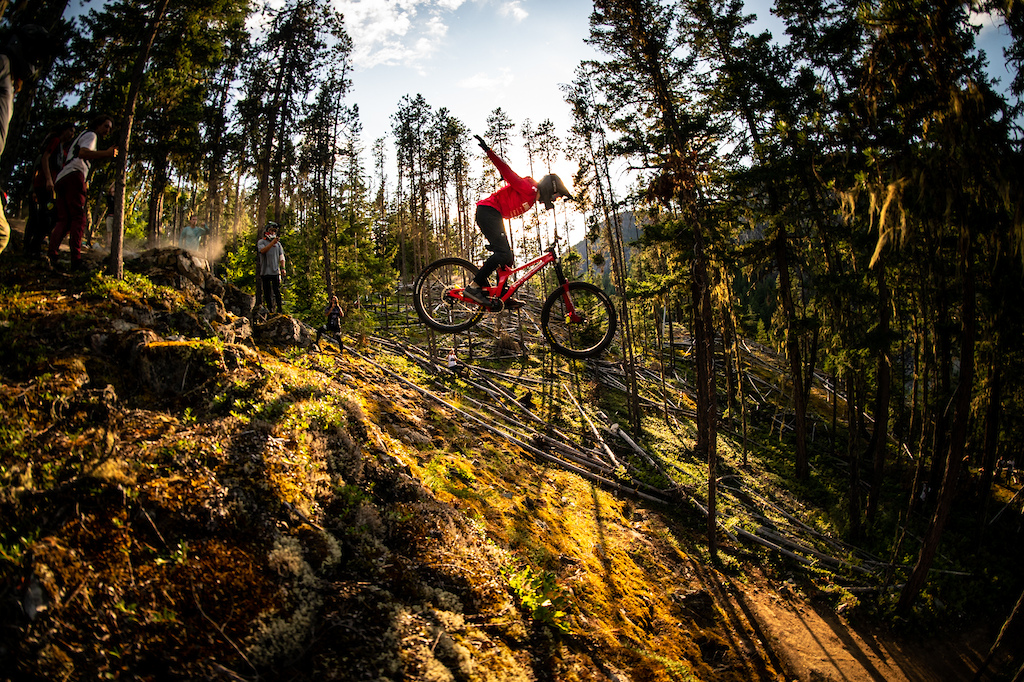 Moto Max is one of the gnarliest riders out there, definitely not afraid to send 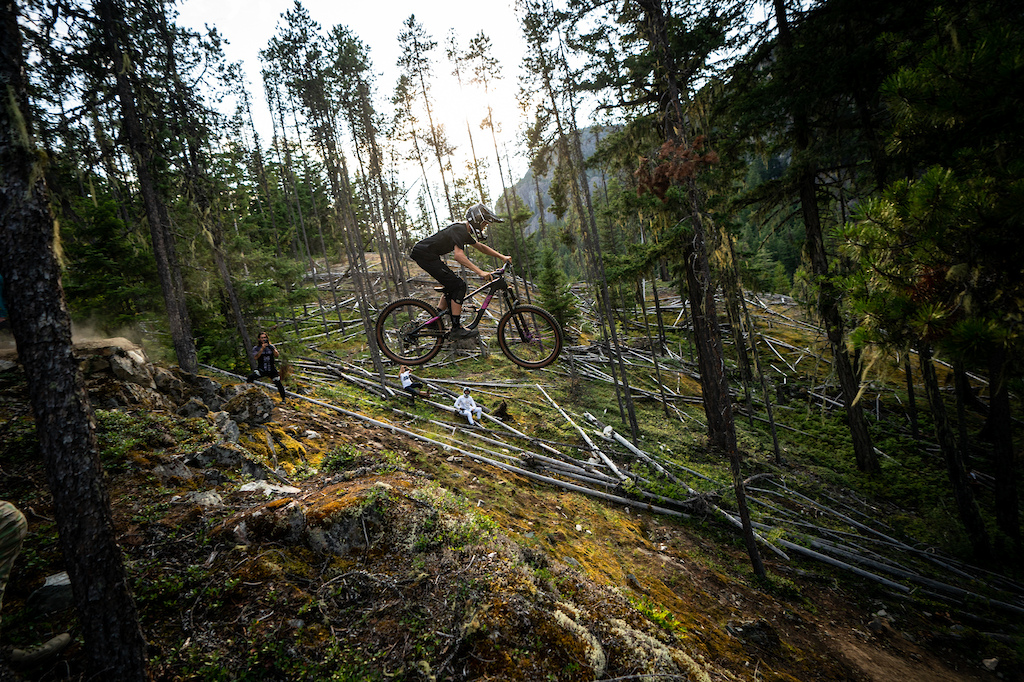 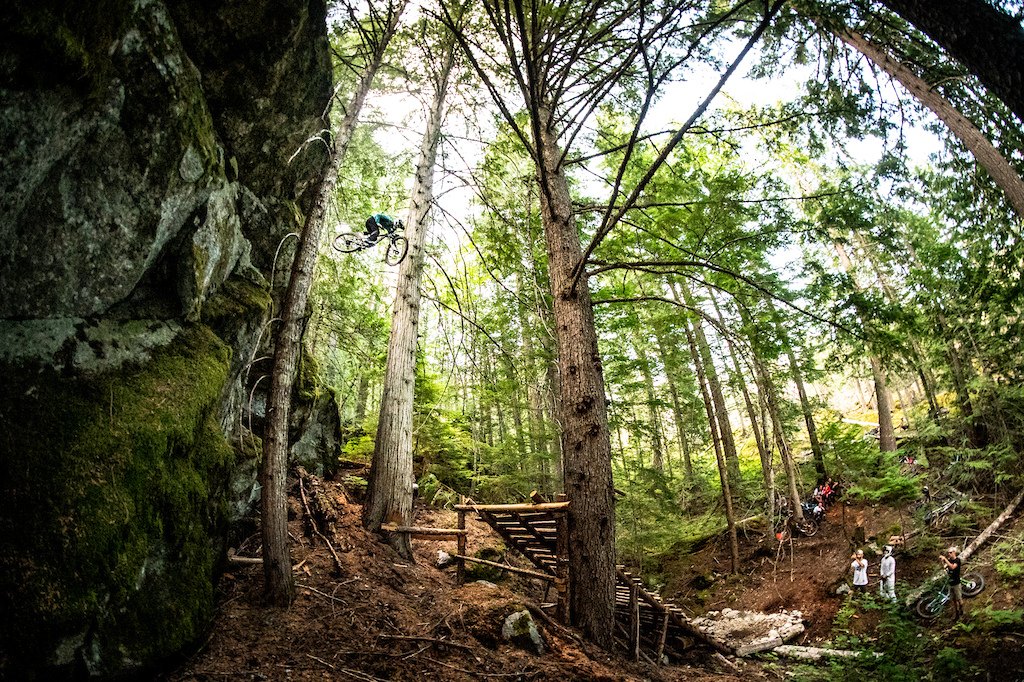 CJ was the youngest by far, 14 year old - Mark Mathew brought his style to some a gnarliest things he's ever ridden 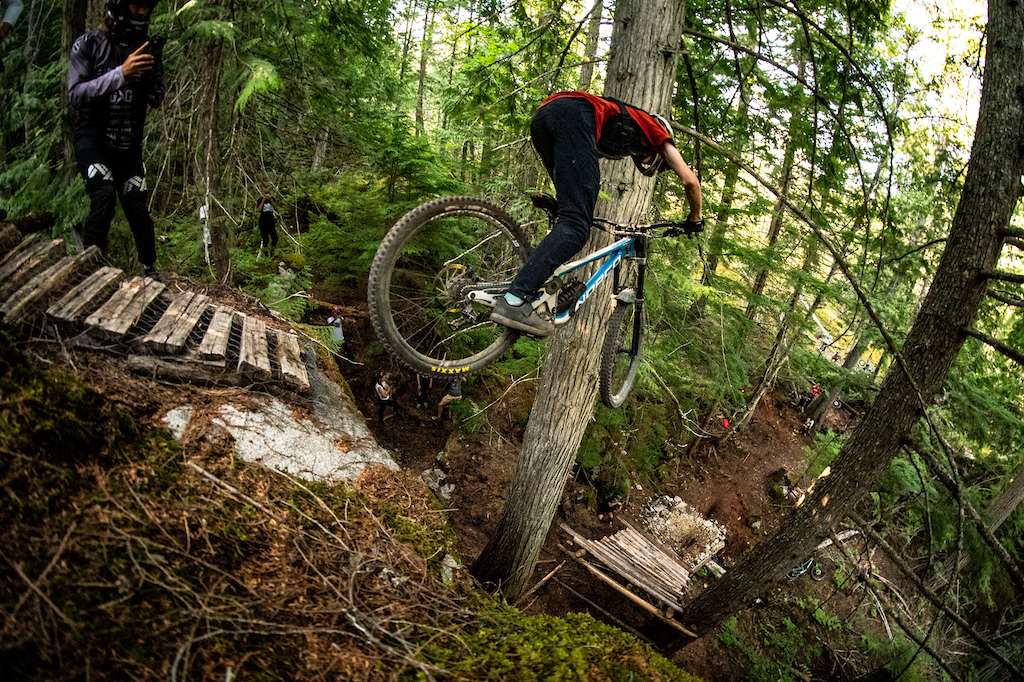 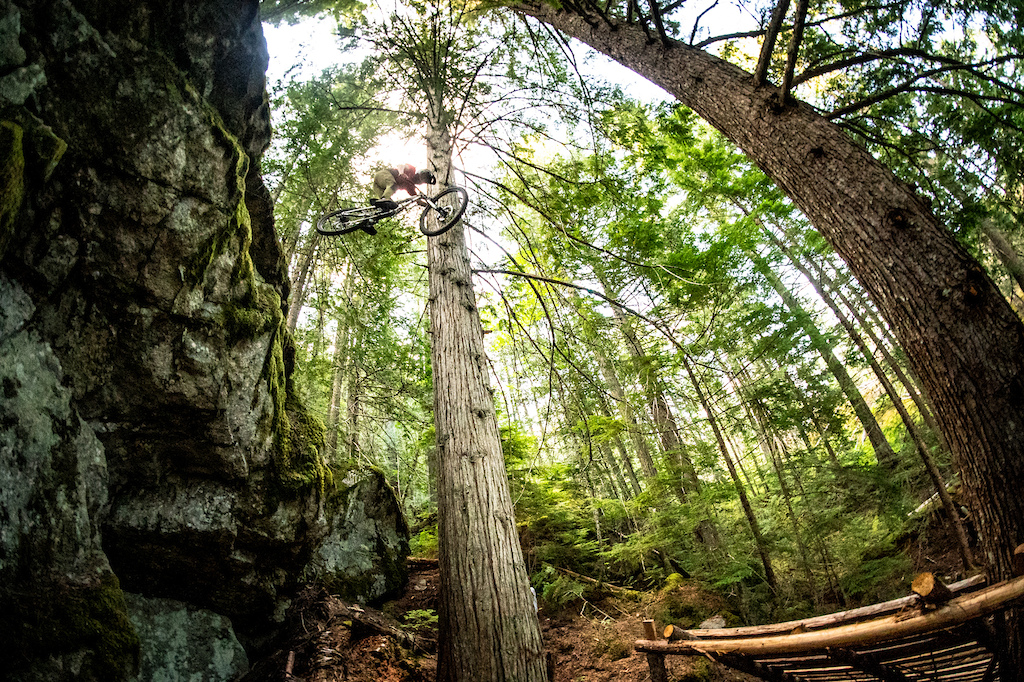 Aven and Sergi showed up in Whistler bringing a wave of new energy to the crew
A big cheers to all the riders, Cami Nogueiraa, Steve Vanderhoek, CJ Hauptman, Max Grayston, Ryan Rodriguez, Nate Spitz, Mark Matthews, Peter Salido, Lewis Buchanan, Aven Elsberg, Sergi Massot, you guys sent it all day with such an amazing vibe, no ego, lots of respect for each other. I've never experienced something like that before, and am grateful to each of you.

Thank you to our support crew, and thank you to everyone who contributed to making this edition very special; nothing would have happened without you !!
Thank you to all the brands who supported this year's edition; you guys rock !!

Presented by INTO THE GNAR

Seriously though, mountainbiking does not get better than this, does it? Being out in the mountains with friends, supporting one another, doing things that scare you, cheering for one another. It's what counts, regardless the level of riding you do.

Have a beauty of a weekend sending it !!!

MrShreddypants (Nov 6, 2022 at 8:29)
@BarneyStinson: if you did this on a stumpy evo, your shock would probably blow up lol

sooner518 (Nov 4, 2022 at 10:08)
Incredible watch. these people are animals. cant even imagine how insane these features look in real life becuase they look fucking massive on video.

aug7hallak (Nov 4, 2022 at 11:03)
Exactly. Bunch of animals. Crazy beasts wandering around freely. Even while sitting at my chair, I got nervous on every single feature. And I still can't define Caleb Holonko gaping over the whole thing.

Hogfly (Nov 4, 2022 at 12:07)
Amazing.... honestly the runouts seem sketchier than the features on a lot of these (I mean.. with full acknowledgement that the features are gnarly as hell... but they're well made. The runouts are kind of an afterthought and seem super sketch).

Spunk (Nov 4, 2022 at 13:27)
How is Yoann so good at stopping compared to the others? Seems like a basic skill to have if you ride these features.

Hogfly (Nov 4, 2022 at 13:30)
@Spunk: I THINK it's because he's more familiar with the runouts because he's ridden all of the features before, whereas it was first time for most of these riders. I imagine they're focused on the main part of the feature and not really thinking too hard on the runout.

CarbonShmarbon (Nov 4, 2022 at 20:00)
@Spunk: I notice this with Remi, too.
Their braking sets them apart from everyone they ride with. I watch for this, and to me it looks like they really jam their heels down, which might dig in the back tire, rather than have it skipping along the surface? I'm speculating.

yoannbarelli (Nov 4, 2022 at 21:26)
@CarbonShmarbon: @spunk @Hogfly Knowing the lines definitely helps A LOT !! these riders just show up with very limited amount of time to look at features. None of the features in the Sea to sky are "huge" but all of them have a sketchy run in or a sketchy run out making them tricky to ride. As far as braking control go, this is something I'm working on every time I ride, Imagine that you want to plant the bike into the ground, Heals down will press the rear tire into the ground, but will by default will push my arms onto my handlebars, and putting weight on front wheel will make the braking way more controlled. The more heavy of a braking, the more I push on my heals, the more I push on my front, the more it plants the bike, the more I'm controlled!! Biking is easy

Hogfly (Nov 5, 2022 at 5:45)
@yoannbarelli: Thanks for the straight up answer. We all know it's really because of that Guerilla Gravity Frame's superior kinematics, the EXT suspension keeping everything planted on the ground, the Hutchison tires amazing grip, and the fantastic modulation and stopping power of TRP brakes... right?

sarcasm>No, you’re right they’re not huge at all. /sarcasm>

lkubica (Nov 4, 2022 at 10:03)
First thing I though, Steve has balls to ride with no chest, elbow or arm protection. Few seconds later I was not so sure

BarneyStinson (Nov 6, 2022 at 5:55)
That’s what I think in a lot of these videos. Not sure why they don’t with modern body armour being as unobtrusive as it is?

rodeoknight (Nov 5, 2022 at 5:27)
After Yoann stoppies down dice roll, I love the "he missed the crankflip" comment from the other rider.

psyfi (Nov 4, 2022 at 10:27)
Yoann Barelli for president! Props to all the riders and Steve for hanging in there! Yoann's laugh says it all, pure joy!

oceanforsurf (Nov 4, 2022 at 18:42)
This gives me 12/10 bike joy. The content that Yoann is putting out with his crew is a whole new level of stoke. Yoann, Steve, Nate and Remy are the BC dream team. BLESSINGS

Sshredder (Nov 5, 2022 at 14:41)
That vibe . Huge sends with a video that feels like your riding with tour Bros . Woman sending it . Of course they do !. Thanks for including a rowdy pack of all types . Riding at it's best .

doatabletop (Nov 8, 2022 at 0:27)
Incredible vibes, really enjoyed watching that. This is the level of stoke I love to see that the big corporate events can just never really deliver. The real deal. Thanks for putting this together Yoann and Steve!

BarneyStinson (Nov 6, 2022 at 5:57)
Good advice. Although perhaps that is what Steve and Yoann consider a “gentle warm up”?

ak-77 (Nov 5, 2022 at 16:24)
Really cool vibe coming from this video.
If I have to answer the question about who I want to be stuck with on a desert island? @yoanbarrelli . (there will be mountains and bikes on this island of course)

ElVenezuelan (Nov 5, 2022 at 18:36)
that was really good!!! Loved everyone pushing each other sick Vibe, that poor Steveo felt like a sacrificial lamb, Healing Vibes his way!!!! but hey we all know it, Sometimes it doesn't come out as you planed.

oldmanhucking (Nov 7, 2022 at 22:20)
That was absolutely fantastic and congrats to all who participated! Steve, I hope you heal up quick and never give in to the masses and put sleeves on...

straight8 (Nov 9, 2022 at 10:13)
This is so incredible! Great vibes and insane riding on crazy features! Bravo Yoann + co, and healing vibes to Steve.

beanes1963 (Nov 4, 2022 at 18:27)
I find it funny that groms are suprised by "stock"components and a aluminum bike of all things.. hahaha anything is better than 20 years ago..stock components are insane..what isn't insane are all the lemmings masses buying "upgrades"on there 5000$ bike and can barely ride a flowbee which ain't a fkn trail just like ebikes are not mountain bikes.

yoannbarelli (Nov 4, 2022 at 13:58)
Filming allows you to re-watch and analyze what other riders do in terms of line choice, body position, speed etc!! Big difference in between being on your phone and using your phone

CarbonShmarbon (Nov 4, 2022 at 20:08)
@yoannbarelli: My personal assistant (Meghan) follow-cams all my rides for just this reason. She keeps up ok, much better that her predecessor (Ben). Ben was a bit smoother, though. I might get Meghan some fancier trail-running shoes. Rather, lend her the money to buy some. Interest free, of course.