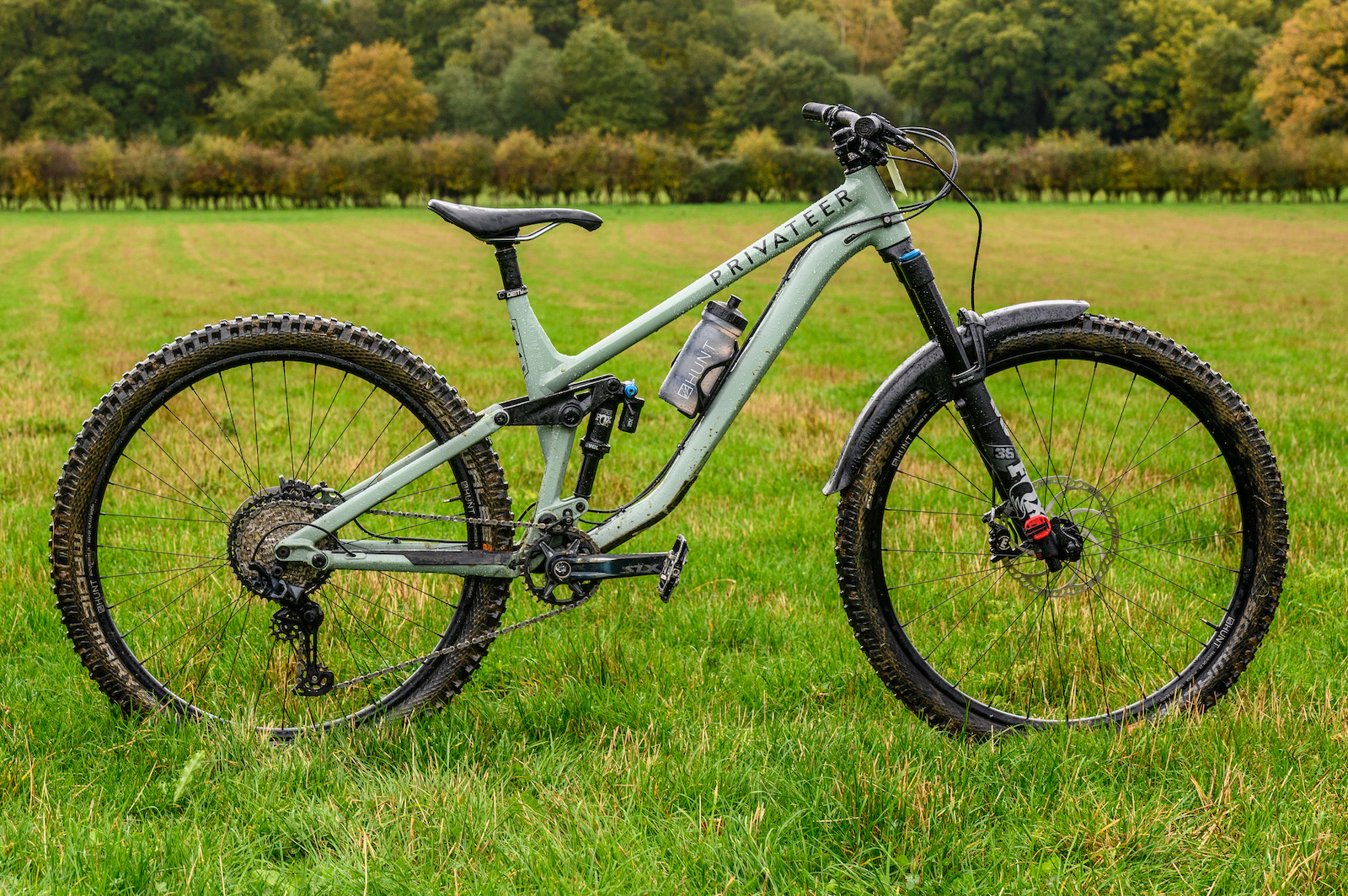 BIKE CHECK
Dan Clark's
Prototype Privateer 141
Photography and words by Nick Bentley (Man Down Media)
Dan Clark's Privateer 141 is beautifully simple and that's kind of the point.
Dan Clark's Privateer 141 is one of the prototypes of the upcoming 2021 Privateer 141 that is due for release early next year. To really understand this bike you first have to understand its big brother, the 161. The 161 was built to be an enduro race weapon while still being affordable and easy to look after. The new 141 takes off right where the 161 left off just in a more versatile guise. A reduction in travel from 161mm to 141mm and the stretching out of the riding position makes this more of a trail bike than a big-hitting enduro rig, but don't let that fool you, this thing can still take a day at the bike park or an enduro race or two.

Dan is lucky enough to work at Privateer and Hunt wheels which is why he's riding the prototype 141 at the Southern Enduro series, which is where we caught him at the 3rd round in Milland, in very typical English weather conditions of rain and mud. This is exactly where this bike feels most at home. Dan's bike is pretty much an out of the box build of the Privateer with some little exceptions that we will show you below. 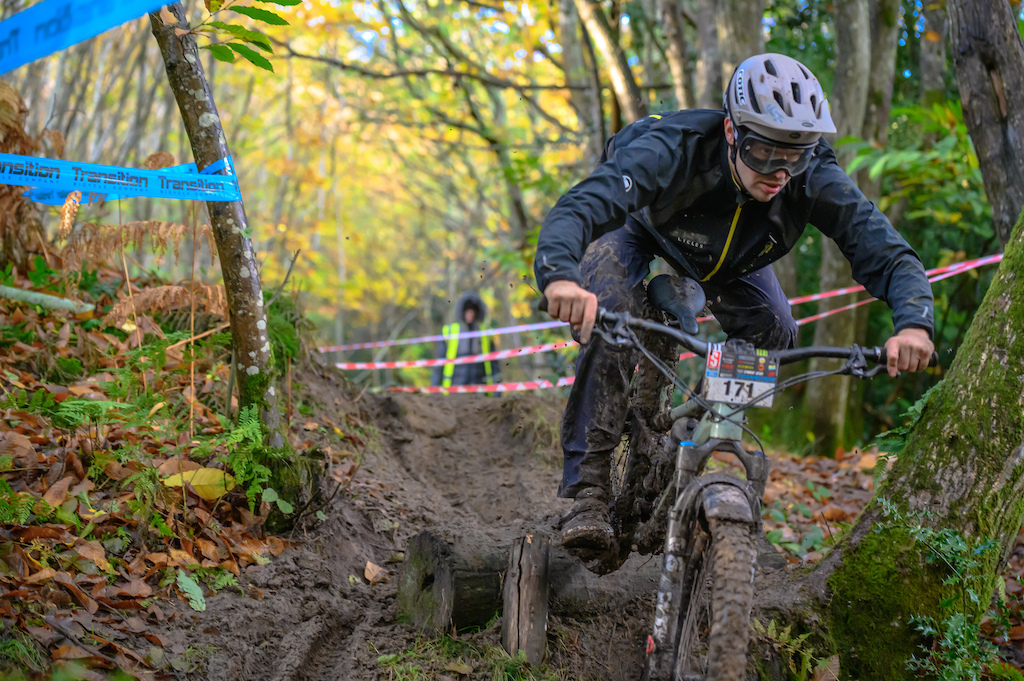 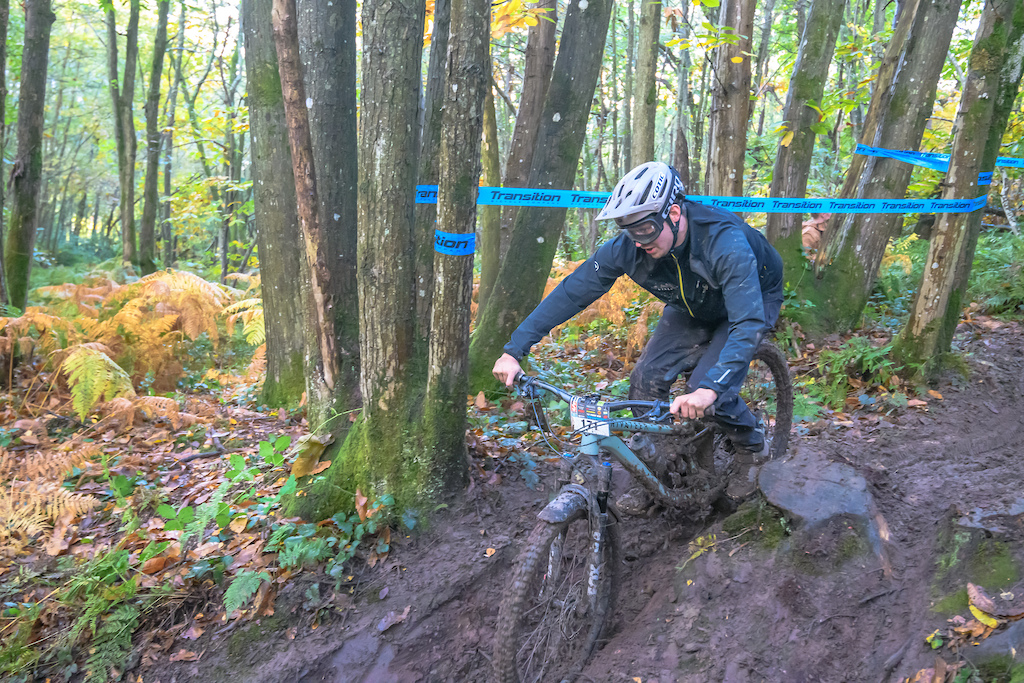 Dan putting his 141 through its paces in the mud. I guess they can tick the mud clearance off on the testing list after this race. 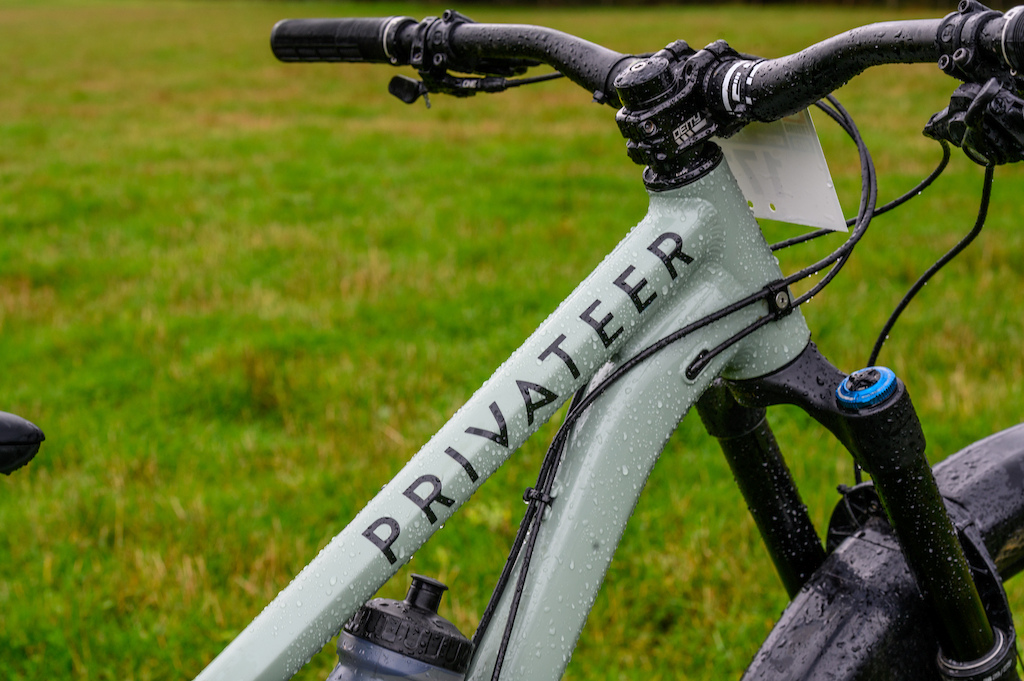 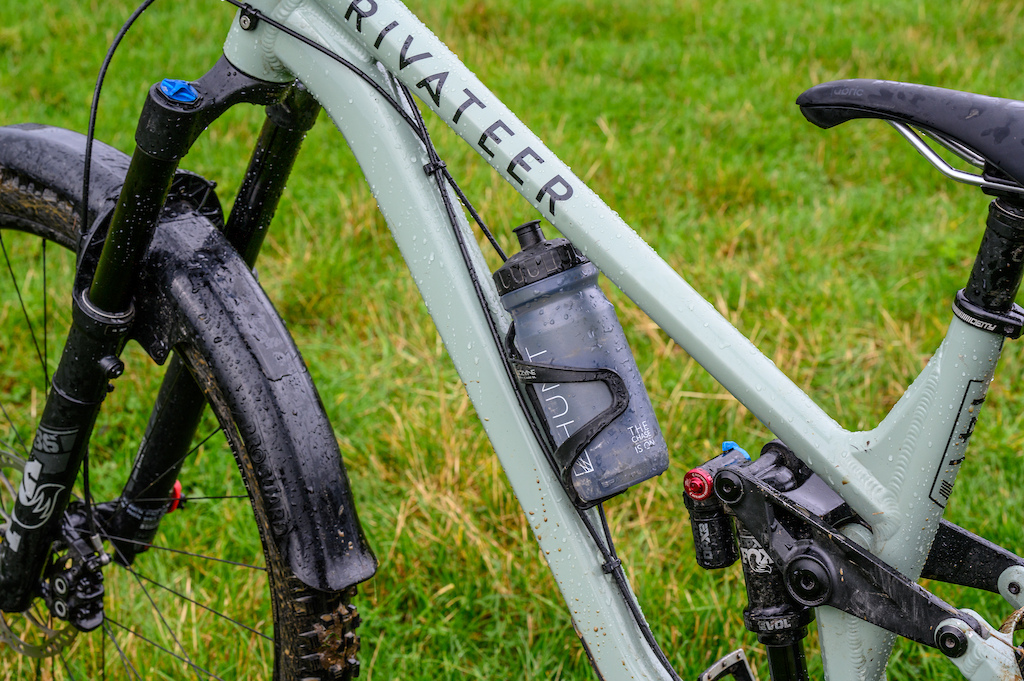 Is it still a trail bike if you can't fit a bottle cage on it? The external cable routing runs down the topside of the downtube making any changes easy to do. 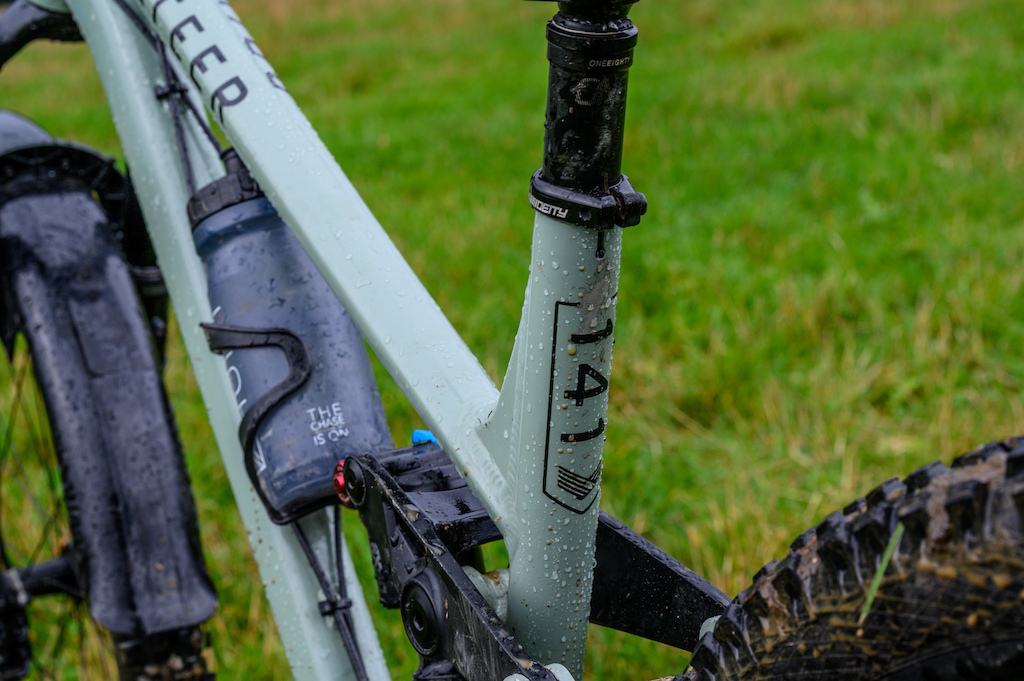 This bike has seen some serious testing in its life and has the scars to prove it. The OneUp dropper post gives you 180mm of drop on it and Dan has pretty long legs so he runs it slightly out of the seat tube. 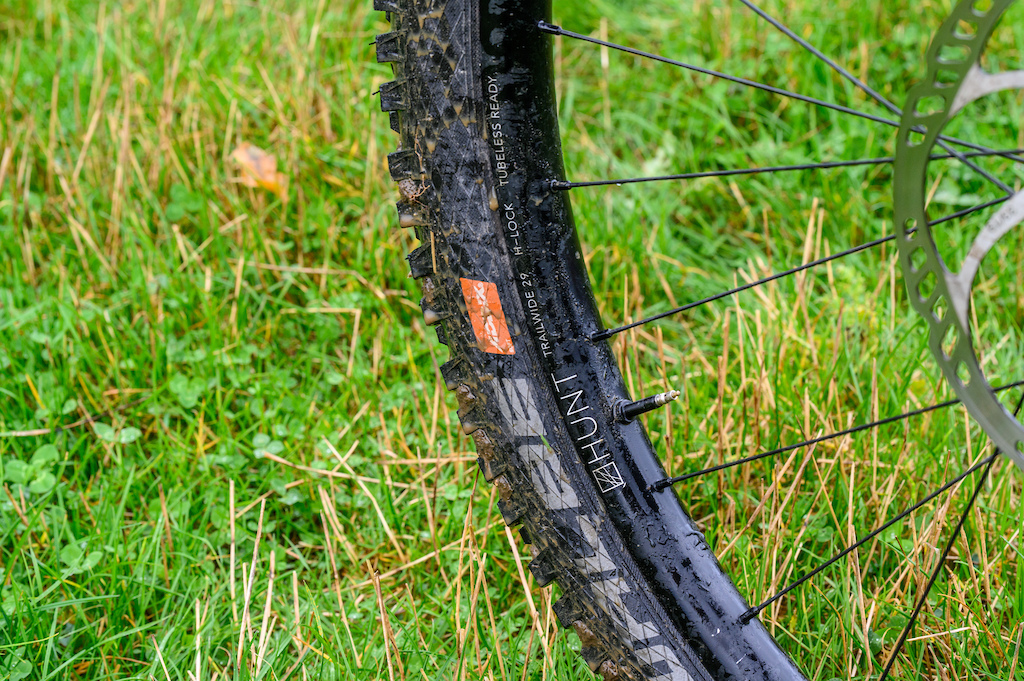 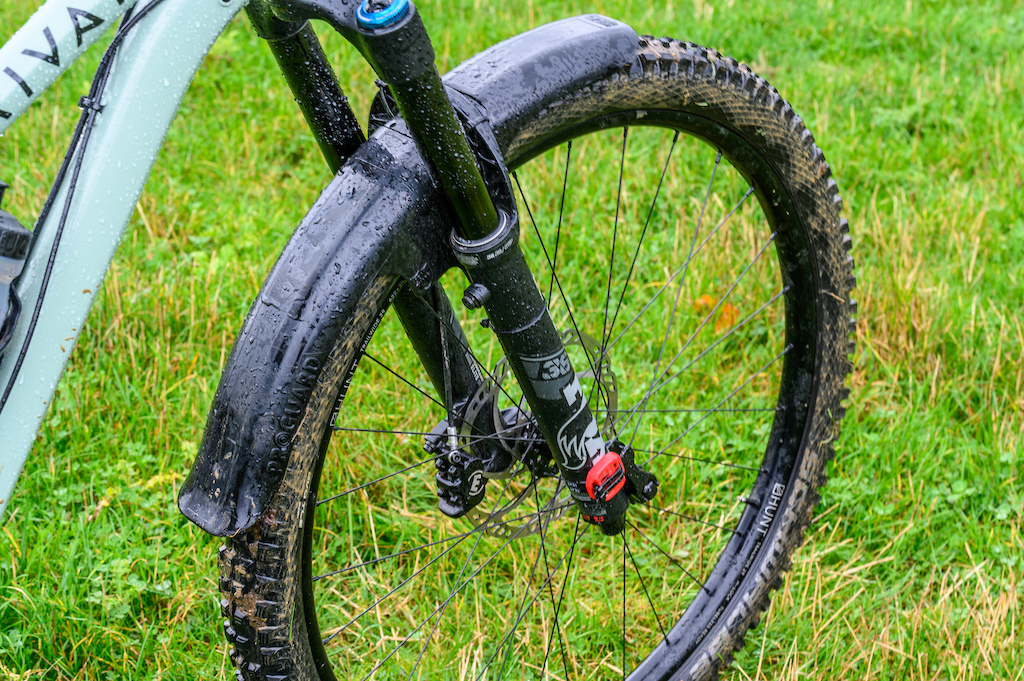 The 2021 Fox 36 150mm Performance Elite with a Grip 2 damper and a 42mm offset is fitted to the front of the Privateer 141, with the new breather valves on the lower legs and the biggest mudguard that Dan could find - an essential thing for racing in the mud. 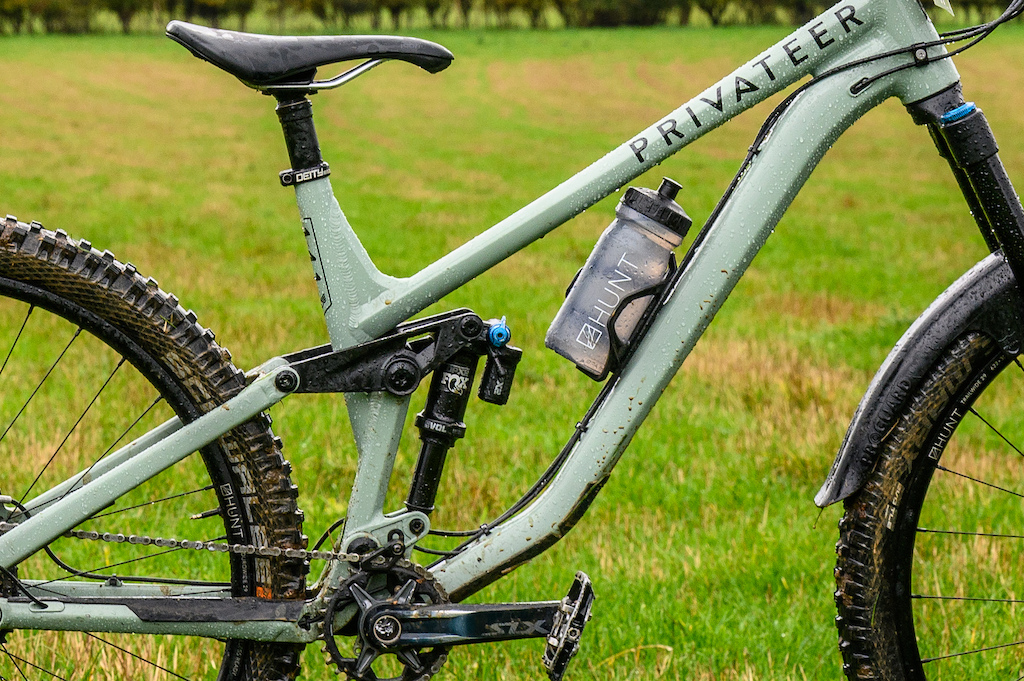 The 141 comes with a Custom Fox DPX2 Performance Elite rear shock fitted.
One difference on Dan's bike to the production 141 is Dan running a Deity Cockpit with a 20mm rise bar. The production bike will get a Raceface 20mm rise bar and 40mm stem with Fabric Funguy grips. 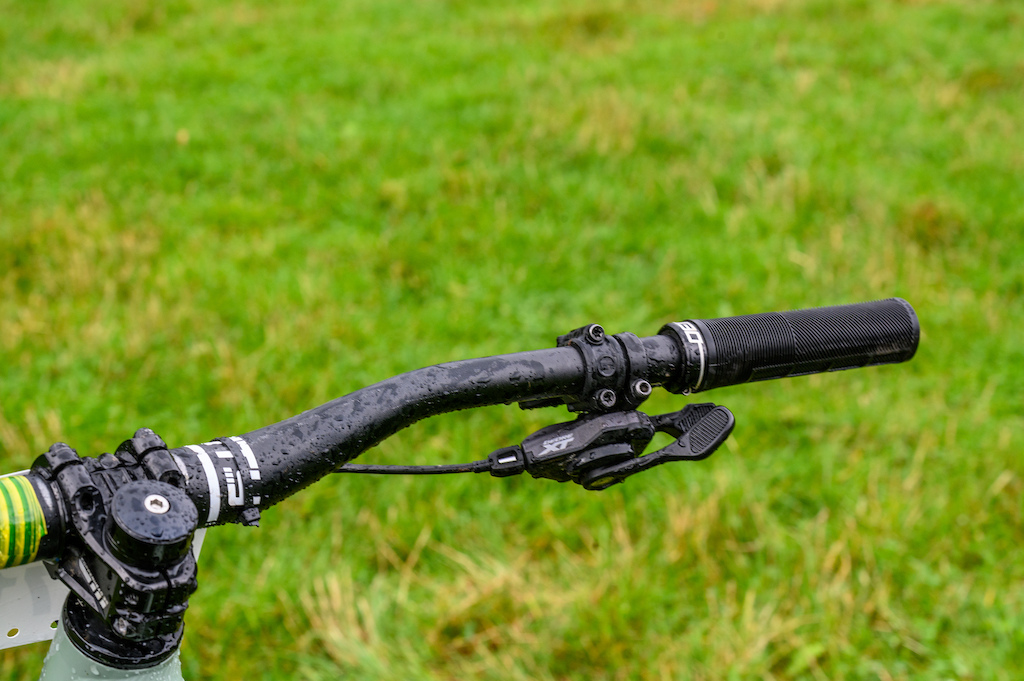 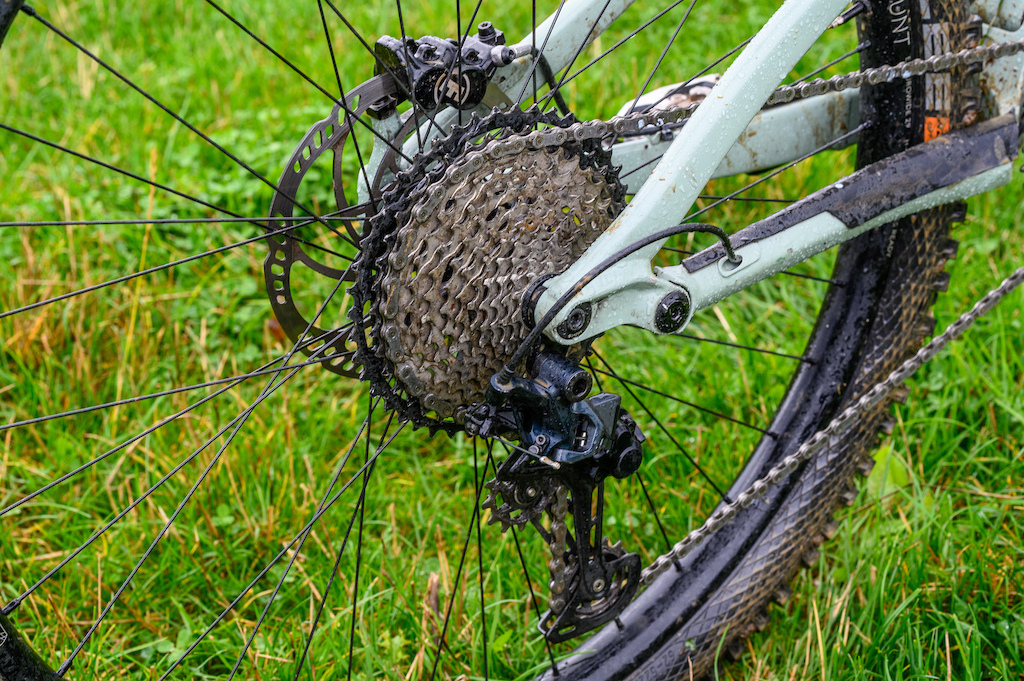 The tried and tested Shimano XT shifter SLX mech, cassette and crankset 12 speed set up can be found on the Privateer 141 with a threaded bottom bracket. Dan has fitted a OneUp chain guide for a little bit of added peace of mind keeping the chain safely on the SLX 32 tooth chainring. Interestingly Dan runs the smaller of the two Shimano SLX 12 speed cassettes as he feels he doesn't need the 51 tooth due to how well the 141 pedals.
Dan chose to run some Nukeproof clips for the Milland race which given there was more mud than anything else (well, other than wet roots) was a brave choice. 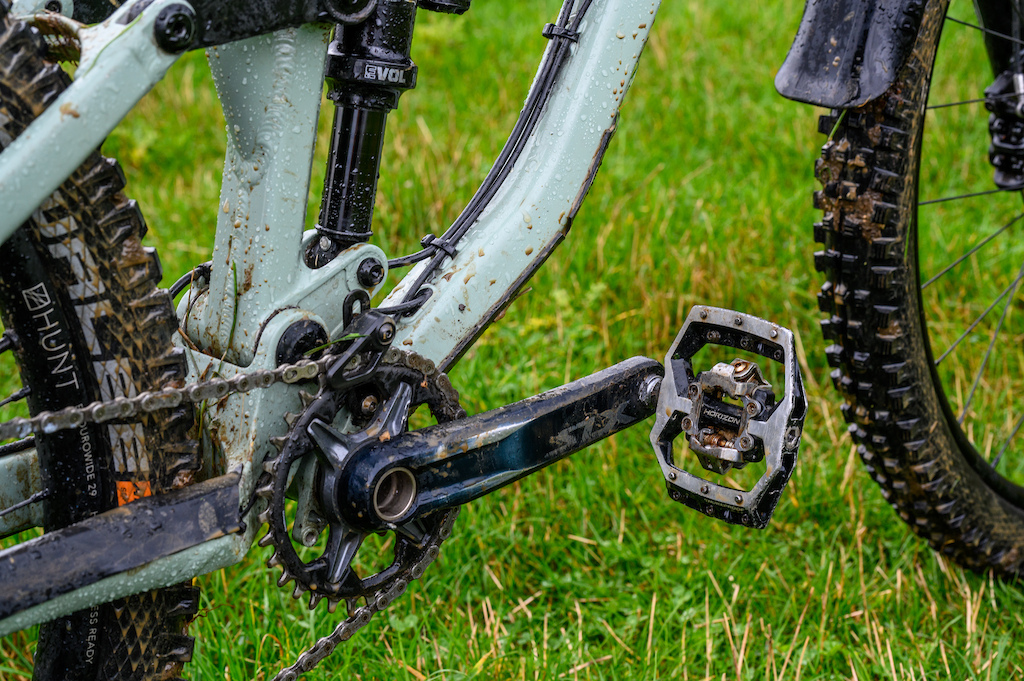 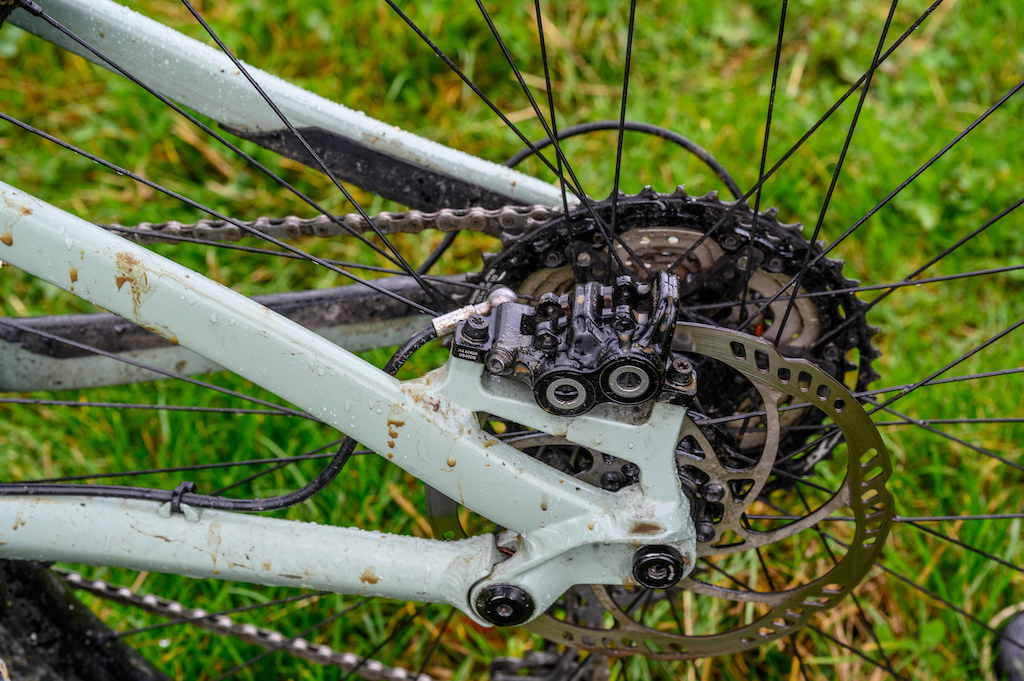 Magura MT5 brakes are fitted with the HC 1 Finger lever installed. The 141 uses Magura's Storm HC rotors with 203mm front/180mm rear
A massive thanks to Dan for letting us take a look around his bike!

Ben2601 (Oct 27, 2020 at 15:00)
@fullendurbro: they have more sponsors, the likes of Matt simmonds and Matt stuttard, they were all sponsored by hunt (sister brand) before though

AndrewFleming (Oct 27, 2020 at 10:33)
The no gloves thing still gets me. Maybe cuz I'm an old glove-loving fart, but damn, this guy is covered up and riding in muck but doesn't need gloves for grip?

IamTheDogEzra (Oct 27, 2020 at 11:03)
Someone put gloves on me and I could not walk correctly for a while. Removing the glove and eating also resulted in reduced walking capabilities. 2/10 would not recommend gloves wet/dry or otherwise.

To each their own.

GlassGuy (Oct 27, 2020 at 13:32)
@Monkeyfcuker: or you live in a very hot/humid place and sweat is constant, which in turn can cause a slippy grip especially in techy/sketchy/fast stuff. So maybe you're just a closed minded dick and not all glove wearers are pussies

eteyber (Oct 27, 2020 at 13:34)
people who ride without gloves either are immortal or aren't sending it hard enough, or else they would know how much it sucks to not be able to ride because there's no skin on your palms

Trialsiain (Oct 27, 2020 at 15:21)
My friend rode in the rain once and forgot his gloves. Hand slipped off bars when front wheel landed on jump. Broke the side of his hand

JakeEPooh (Oct 27, 2020 at 15:28)
@Monkeyfcuker: who down-votes something so obviously said in jest? As if everybody here doesn't routinely say, ''anybody who does insert thing they don't do> is weak''. I don't understand people.

thenotoriousmic (Oct 27, 2020 at 17:31)
@eteyber: my hands look like the soles of a tribesmen’s foot. Gloves are restrictive and don’t grip as well causing you to hold on tighter and get arm pump earlier. I only wear gloves when it’s raining.

MrZ32 (Oct 27, 2020 at 18:50)
Always wear gloves (came across from moto).. you need your hands to feed and wipe yourself (look up degloving injuries from moto accidents).

There are two further pluses, in australia it gets freaking hot so even when you have sweaty hands, you can still grip the bars and you dont need to wear sunscreen where your gloves are (also starting to wear long sleeve jerseys for this reason).. noting that Australia & NZ have the highest skin cancer rates in the world...

BenTheSwabian (Oct 27, 2020 at 11:07)
What is "beautifully simple" even supposed to mean? It's literally not more or less complex than most other modern trail bikes.

How is a stretched out riding position (and is that seated or standing or both?) more "trail bike " and less "enduro rig"?

GlassGuy (Oct 27, 2020 at 13:34)
the seat tube angle looks like it would create a cramped riding position rather than stretched

BenTheSwabian (Oct 27, 2020 at 11:09)
That's exactly what I was thinking when I originally saw the first review on here. It just doesn't have a point. Their 161 enduro model - oh yes absolutely, I get that. But this thing? Nope.

hamncheez (Oct 27, 2020 at 11:31)
@CheddarJack46: Why would you ever want less travel? I have three reasons:
1. Weight.
2. Climbing efficiency.
3. Faster handling for tighter, twister trails, or more pumpy trails

this bike checks off none of these

fullendurbro (Oct 27, 2020 at 12:34)
@JSTootell: I think it depends on where you are. In Bellingham, I wouldn't miss my 130mm bike. On the Front Range where the only features that exist are creative lines, it's more fun to have a poppy and playful bike.

hamncheez (Oct 27, 2020 at 12:46)
Yes, 130mm bikes can be more fun on trails with rollers, tight berms, and smooth sailing. However, that 130mm is, for the most part, going to need more tame geometry and a shorter wheelbase to be more maneuverable. This bike has a 64 degree HTA, 78+ degree STA, and a near 1300mm wheelbase. This bike is not going to be quick, playful, or responsive.

Aesthethica (Oct 27, 2020 at 12:46)
@fullendurbro: Totally agree being a Denver local. My 35lb sentinel was way more fun to ride than my 32lb ransom. On the 161 now...it is pretty game changing for these miserable colorado climbs.

fullendurbro (Oct 27, 2020 at 12:59)
@Aesthethica: The Sentinel is a pretty perfect Front Range rig. I was between that and the Forbidden Druid. I took a risk and went with the Druid. So stoked on how bottomless it feels, even on Longhorn, Lefthand and in the Gut.

nurseben (Oct 27, 2020 at 13:08)
Because, long travel bikes ride differently than short travel bikes, not unlike how a hardtail rides differently than a soft tail. Granted, there is an innate expectation that less suspension will weigh less, but that's jus no how it works out. So yeah, different strokes for different folks. I'd far prefer a 141 for daily riding.

melanthius (Oct 27, 2020 at 11:10)
Yeah he needs a couple of these to clean up the cables for sure: www.paragonmachineworks.com/frame-building-parts/cable-stops-guides/double/aluminum.html

energetik (Oct 27, 2020 at 16:20)
MT5s are great brakes. I've used them for s couple of years now. But anyone with them must do themselves a favor and run the MT7 pad system. All you need to do is buy the remaining bolts, 2 per caliper, and the MT7 pads. It literally bolts right up. It's infinitely easier to change pads and I think the 1 pad per piston system feels better. Nice bike btw.

mtb-sf (Oct 27, 2020 at 11:36)
Interesting that people think flats are better for mud. I swap between both and last winter on my sloppiest ride I had flats and was wishing I had clips so my feet would stay on the pedals better. I ride Mallet E for clips and DMR vault or Anvl flats. It seems like just adding an extra spacer between the shoe and cleat should be enough to make it easier to clip in through the mud, but still can avoid your feet sliding all over. I also think crankbros are probably better for this than other pedals with a more complex engagement.

bstill30 (Oct 27, 2020 at 11:51)
My trail wides bent fairly easy. Luckily they bent back without issue. Cush Core XC installed in the rear wheel solved the issue.

Ben2601 (Oct 27, 2020 at 15:04)
Modern carbon bikes are barely lighter now because frame manufacturers are beefing them up enough to make them strong enough for modern day riding, the only benefit of carbon now is that it’s stiffer, which isn’t always a benefit