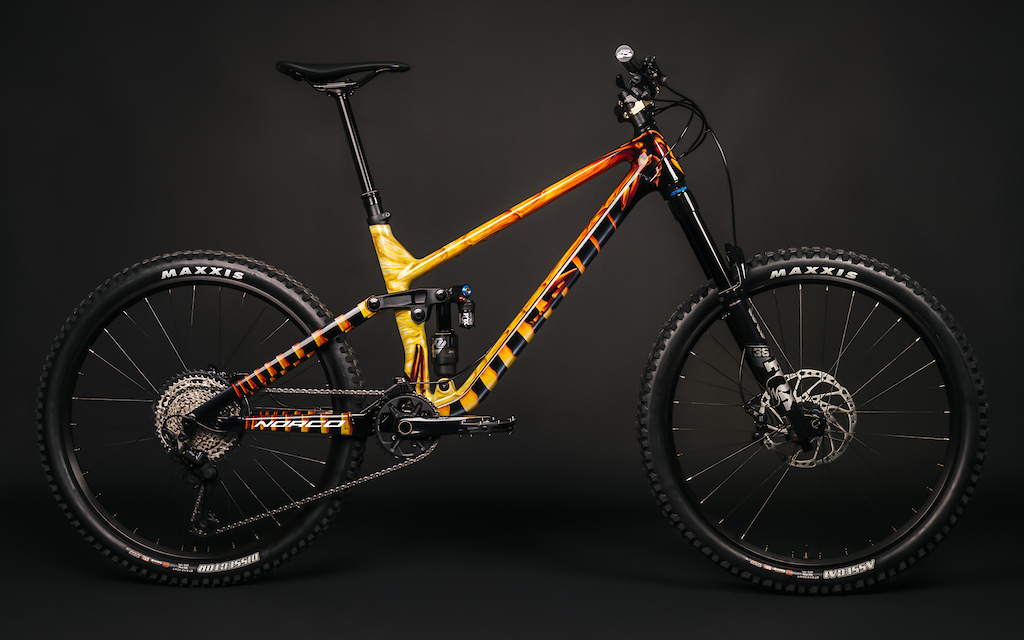 Photography: Bryn Atkinson
You may remember Sully Hicks' 'Yippee Ki Yay Melon Farmer' bike from earlier in the year. That wild bike came from Jill Kintner's Mind Maintenance competition organised with Red Bull that encouraged riders to design their dream custom Norco Sight design that would be painted by Tony Baumann of Made Rad by Tony. With Red Bull only able to promote itself to over-18s, Sully's bike was supported by Norco as a side project, but the winner of the main competition was Zac Martines and this hornet-themed bike.

Zac's design beat over 5,000 entries and it apparently stood out right away. Jill says, "The minute we saw Zac's hornet bike, it was intriguing; A bold graphic, super well thought out as a 360 design, and the elements from the wings and eyes had so much potential in paint. Tony was excited to create this bike, and his enthusiasm for the project helped it rise to the top. We all agreed it was a killer design, from all angles."

Tony said, "Zac’s concept was one of my favorites from the very beginning. His whole idea was pretty dialed. The way he laid it all out, the colors he chose and the amount of detail I knew I could work with really got me buzzing. In doing my research, I got really sucked into macro shots of hornets and fell into a deep rabbit hole when my search led me to a bunch of other macro bug photos. There are definitely some other really rad bug bikes just waiting to happen." 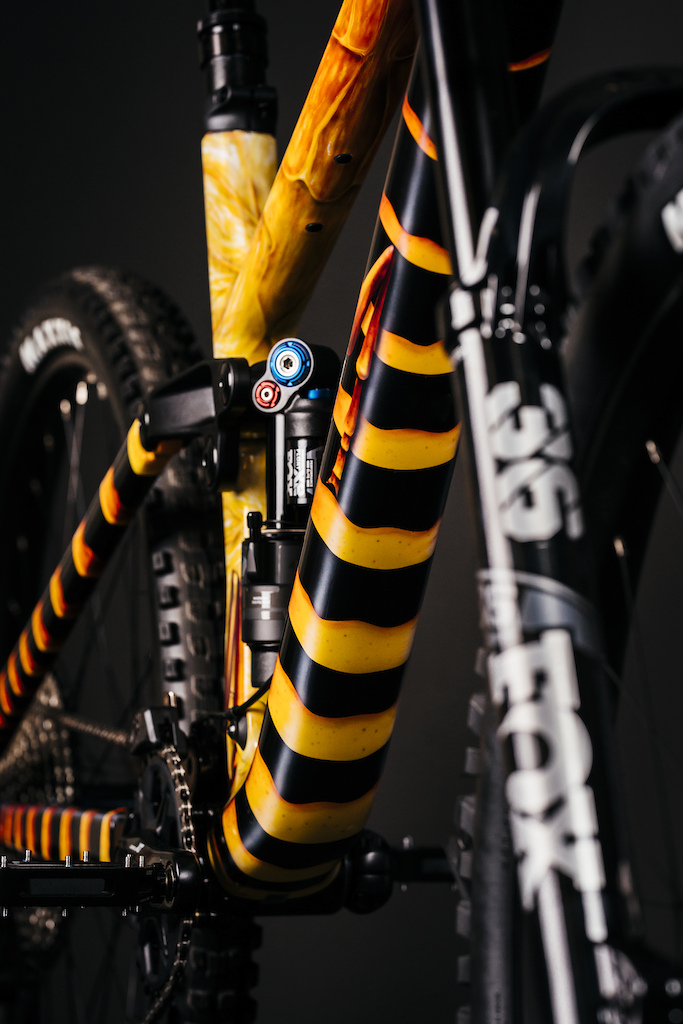 The final result is a stunning custom bike packed with detail that Zac will surely cherish for life. From the detailed macro-shot face on the head tube to the delicate wings on the top tube and Zac's name on the chainstay, it's sure to cause a buzz wherever he rides. To top it off, Jill, Tony and Bryn came to drop off the bike in person and he got to show them around his home trails on his new steed. 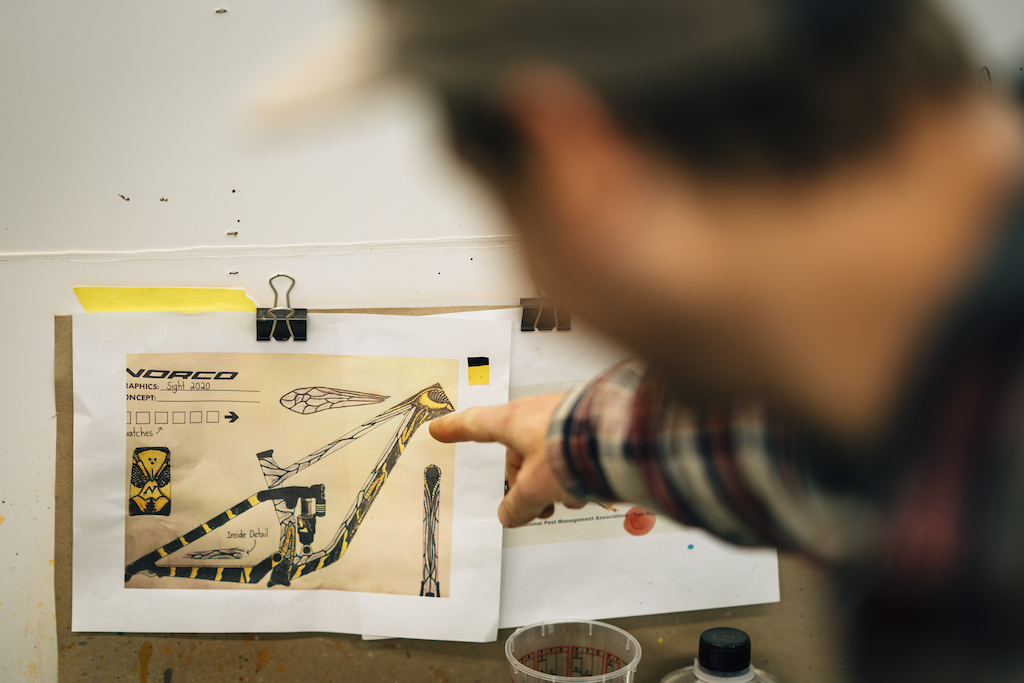 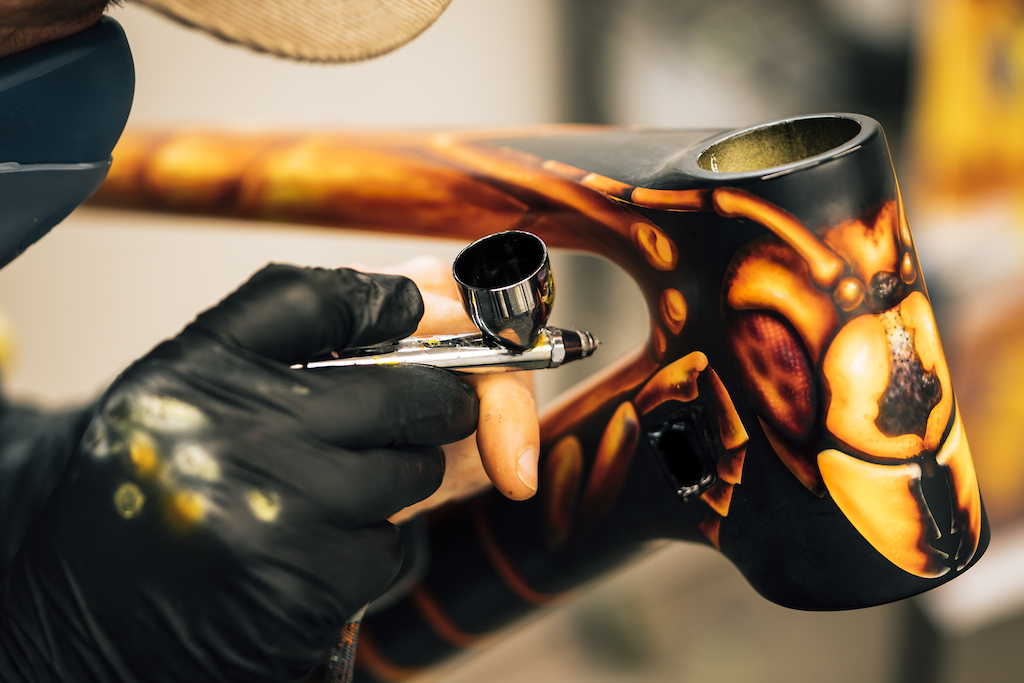 Tony was anticipating the hornet's head would be the hardest part of the painting job... 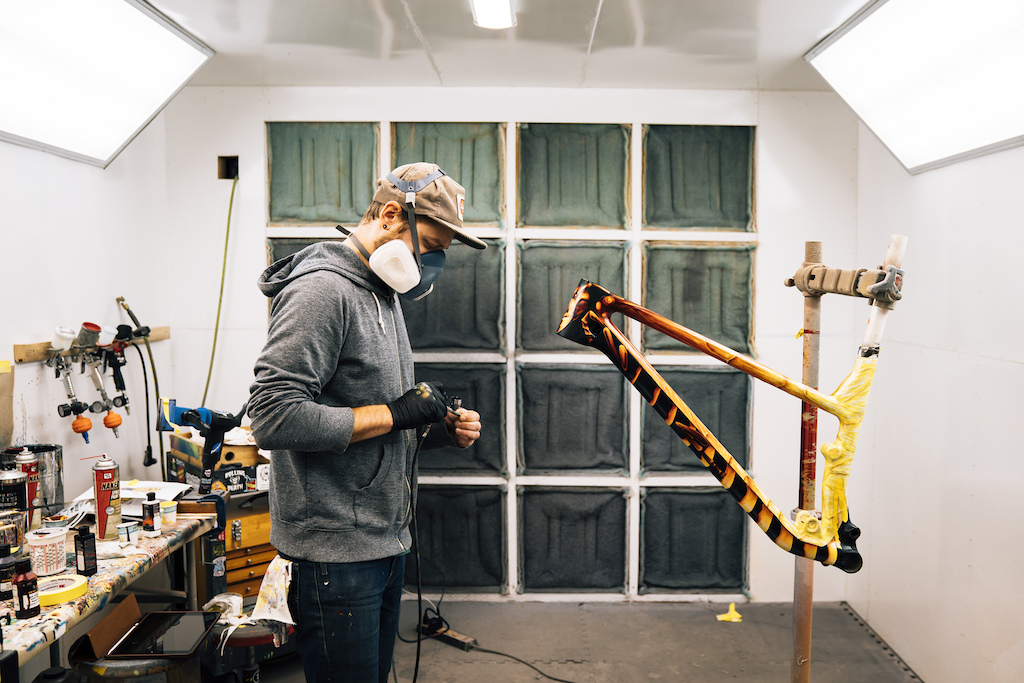 ... however it ended up being the wings on the top tube. He said, "The wings however, ended up being much more difficult than I anticipated and I spent way too much time on them. I was trying to keep it as close to Zac’s mock-up as possible, but the light blues and purples he used really didn’t jive well with the rest of the hornet. As a last-ditch effort, I decided to go rogue and I made the wings more of a fiery yellow/orange and hoped for the best. I think it was the right call and luckily Zac agreed." 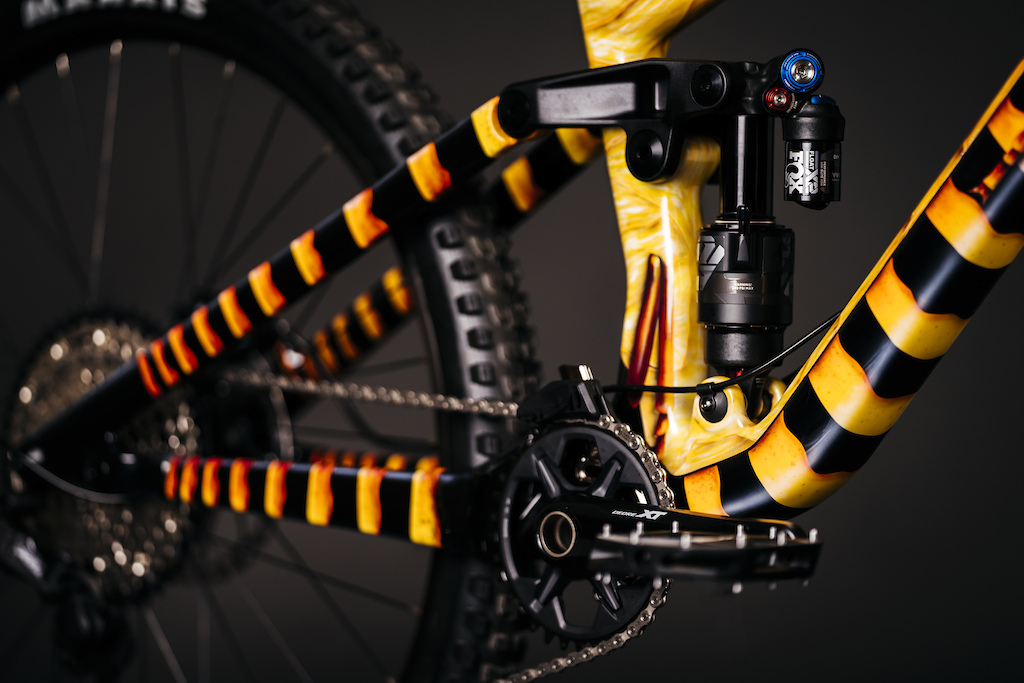 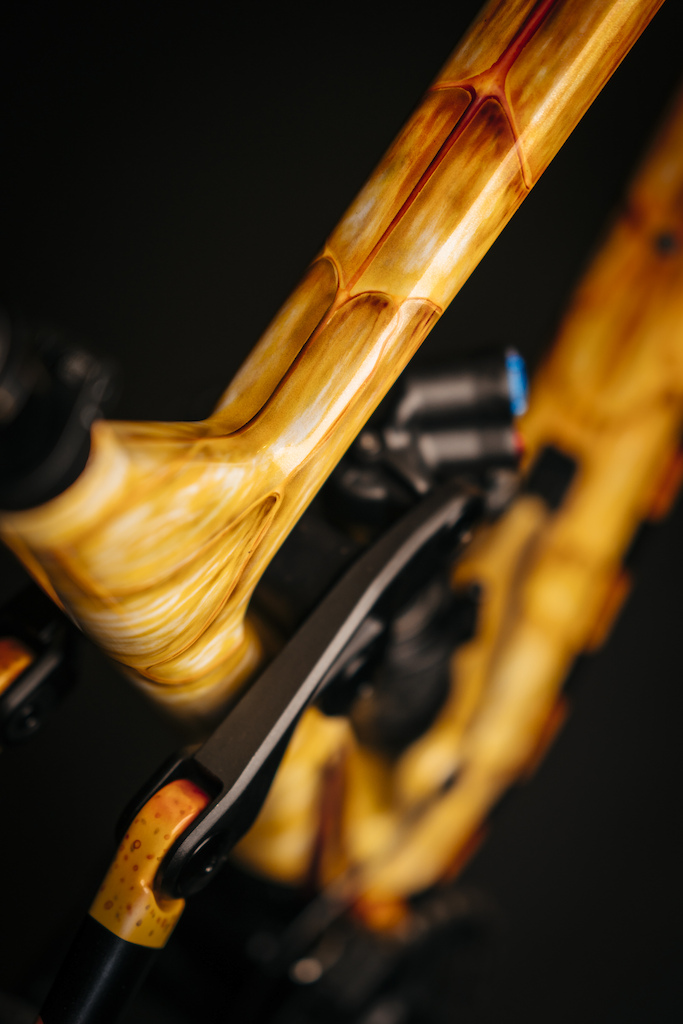 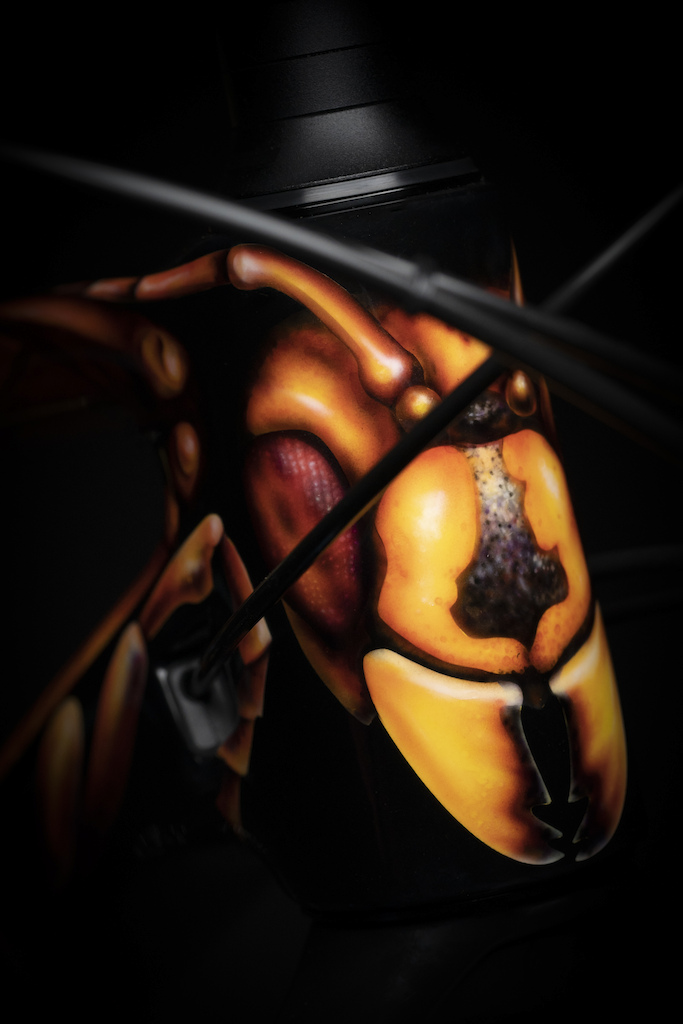 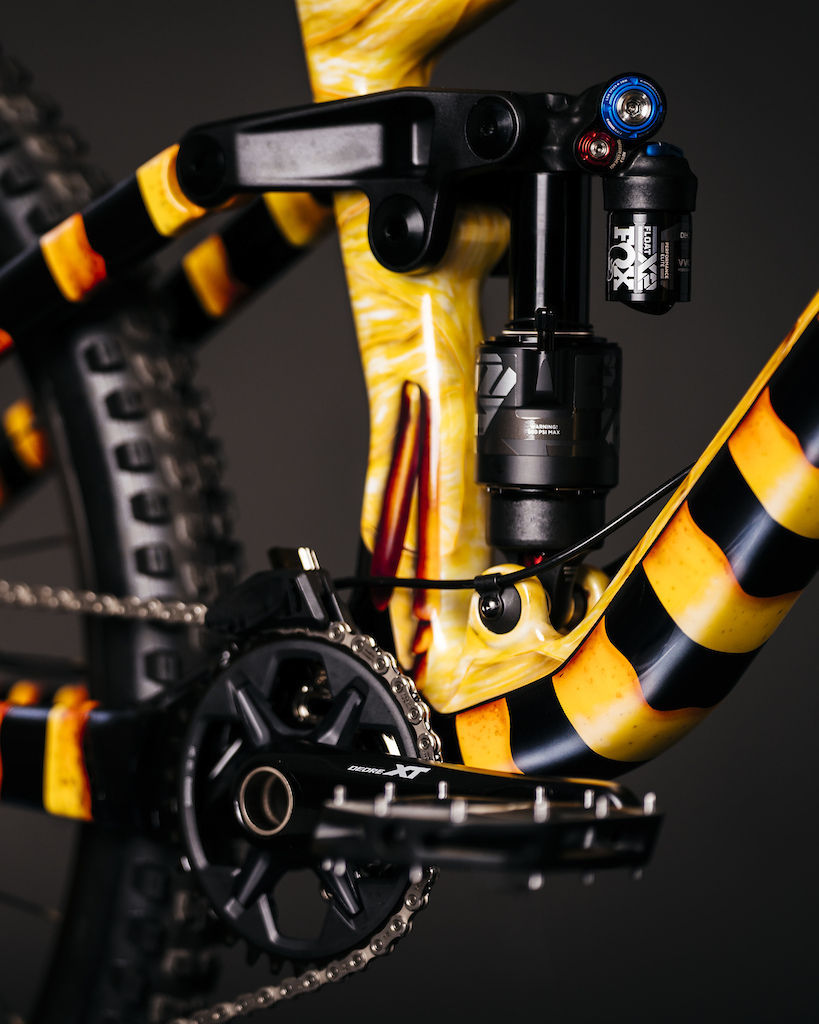 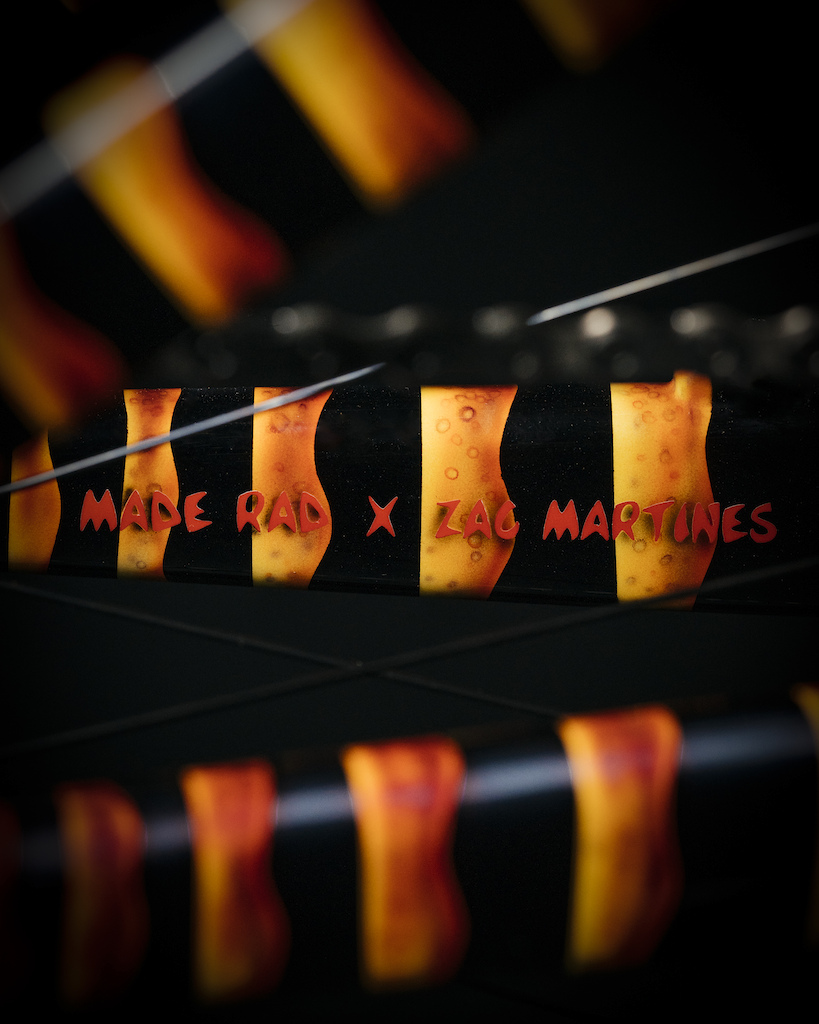 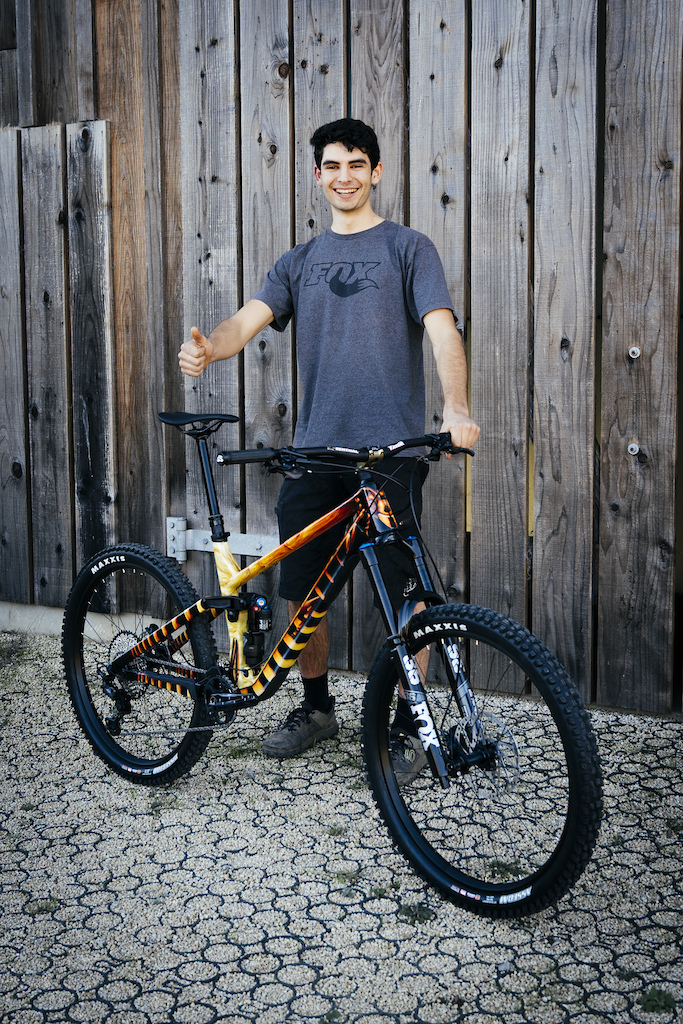 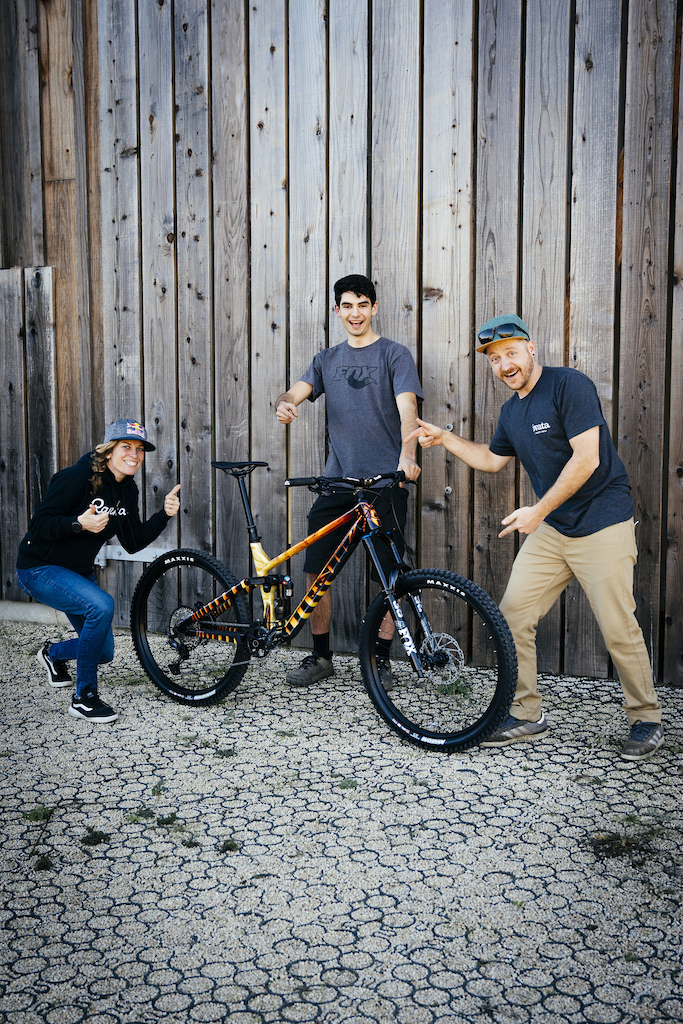 With over 5,000 entries to pick from, there were plenty of other strong designs that came close to winning. Jill said, "It's a shame we had to pick just one. Judging was beyond difficult with so many great concepts. Isaac Orloff's dart frog was a close contender again for the boldness, textures, and vibrant colors. The broken TV bike was fantastic, the Robot bike had a fun personality, the watercolor 'dirt church' stained glass bike was beautiful, the treasure map bike was full of surprises, and and and…They were all uniquely special." 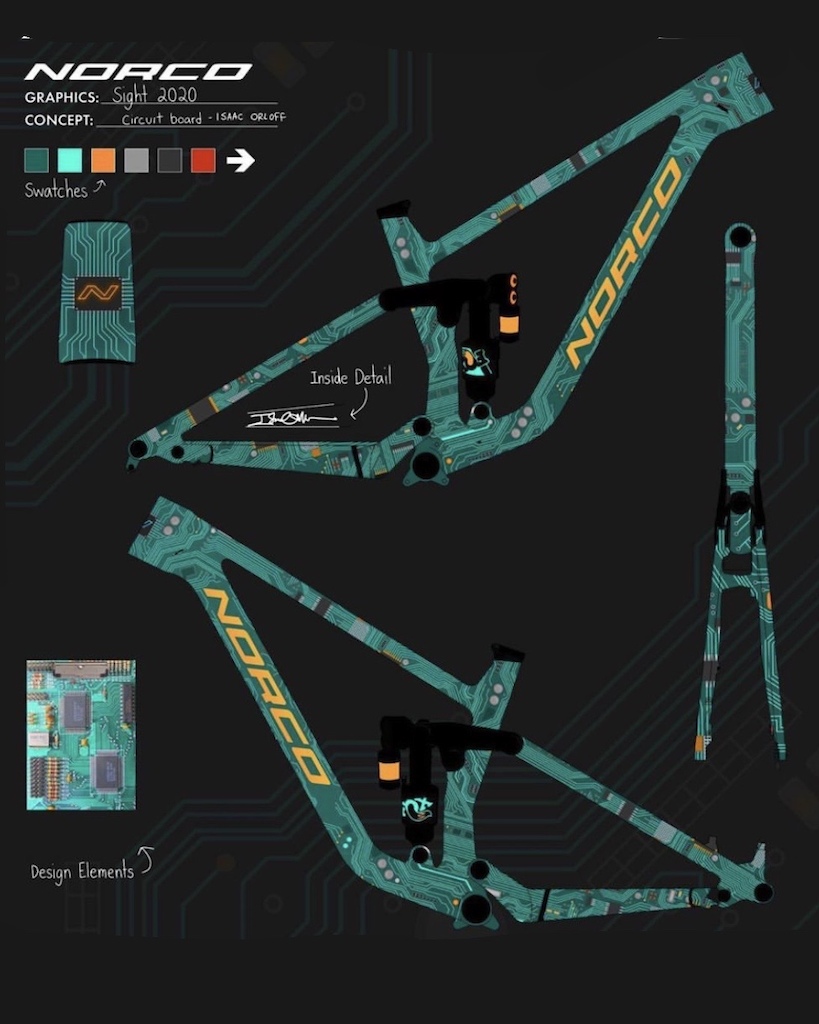 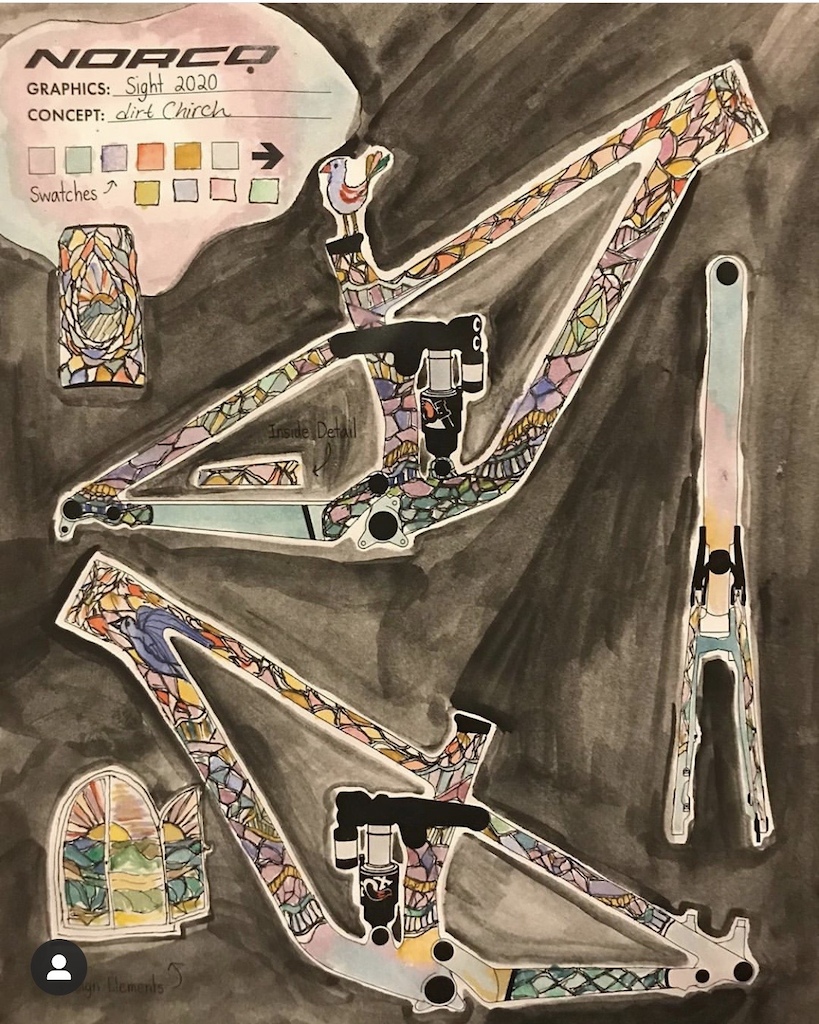 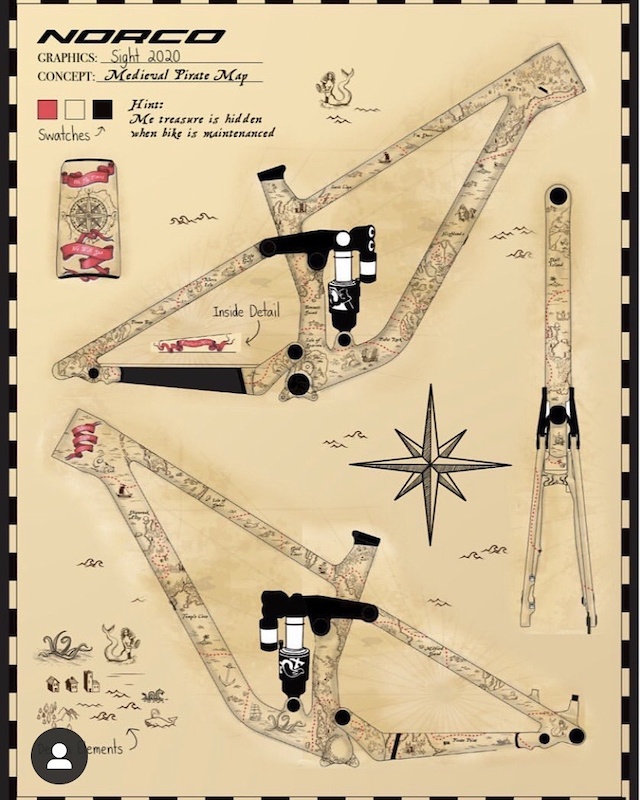 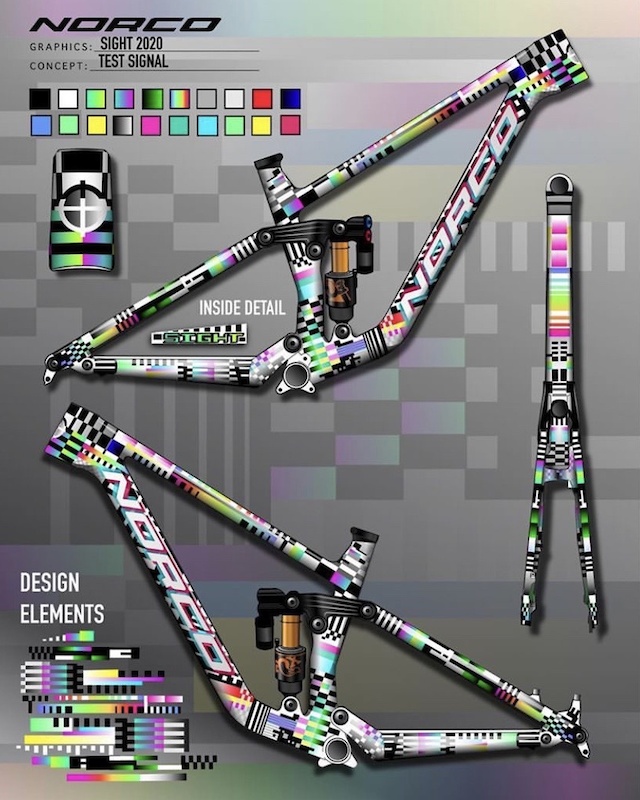 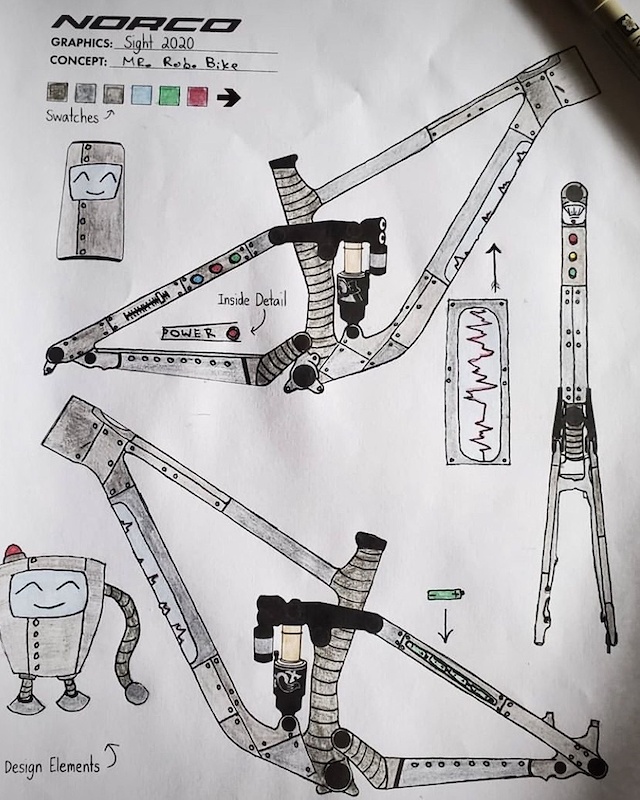 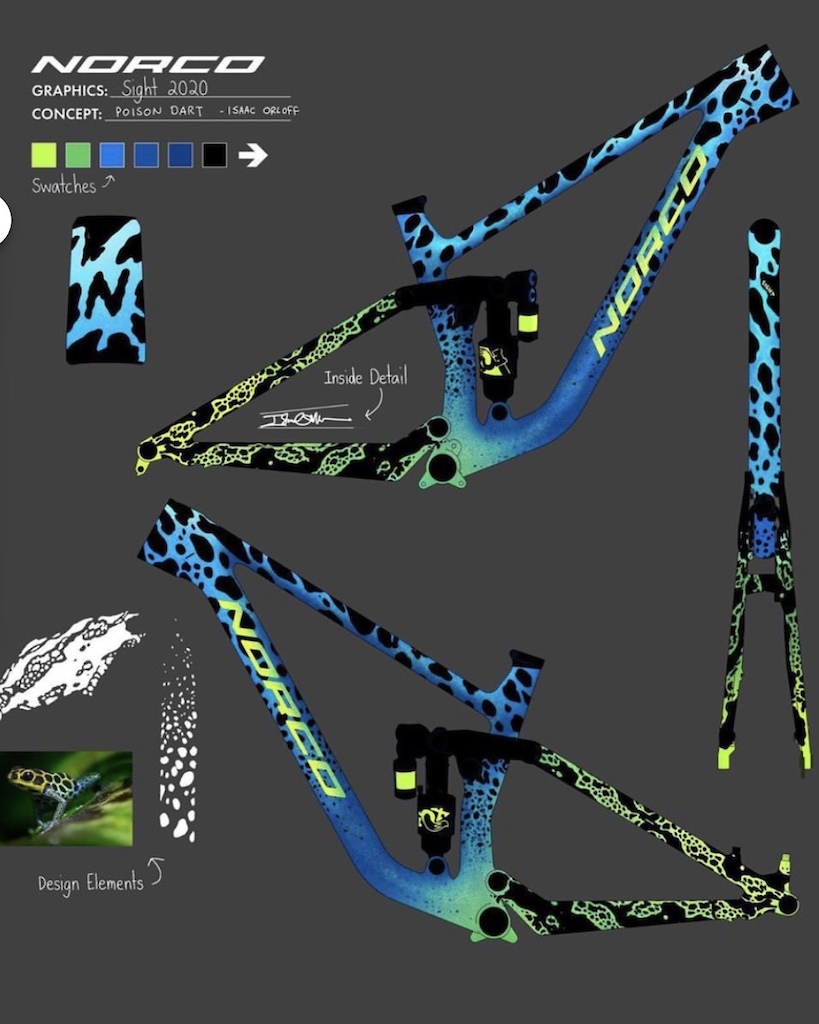 We've been told that Red Bull and Jill are planning on bringing back Mind Maintenance again sometime next month so if you fancy your chances of winning your own custom bike painted by Tony, keep an eye on Jill's social media feed.

andrewfrauenglass (Apr 22, 2021 at 18:03)
Especially since that air brush looks like a giant ganja pipe, quite a buzz indeed...

ceecee (Apr 23, 2021 at 12:18)
@suspended-flesh: 'artist' added a degree, musical made buzz fuzzy, and even if photo five is the interior of a box truck, camper van doubled down on the fuzz, as Ludwig shouldn't have to fly solo? Frames are my canvas and my studio needs new tires....yep, it's a stretch

justwaki (Apr 22, 2021 at 11:03) (Below Threshold)
Nope. Such bike must run Profile. Loudest I have ever heard. Halo Supadrive is nasty too. I think both CK and I9 fall behind these two.

kram (Apr 22, 2021 at 20:03)
@diegosk: In my experience the hardware is the same, and it all depends on how much ring drive lube is in there. A 3 minute disassemble and quick wipe of the drive shell will add 10 decibels.

gtill9000 (Apr 22, 2021 at 10:24)
I think it looks amazing, but what do you do with a bike like that? Hang it on the wall? Trailer it to races and show it off? It hardly seems like something you'd actually ride, especially in the dirt.

gemma8788 (Apr 22, 2021 at 10:35)
Kind of the same dilemma as classic cars. I think you just gotta drive em, ride em. One of a kind paintjob but there are plenty of sight frames out there, so it isn't as bespoke as it could be and that's a good thing. Throw some ride wrap on there and shred it.

GlassGuy (Apr 22, 2021 at 11:35)
@gemma8788: I have a classic car and paint my bike frames. Granted I don't abuse the Cougar like I do the bikes, but yeah...they've got to be seen and enjoyed. That's half the fun of having something that looks really cool!

gemma8788 (Apr 22, 2021 at 14:12)
@GlassGuy: Hell yeah, everything is temporary anyway lol. I built up a Rune V3 frame in the spring and did a decent job with helicopter tape. First ride always feels a little barbaric on something new/nice, but then the fun kicks in and I've found that unless you straight up abuse stuff, it'll last.

the-lorax (Apr 22, 2021 at 15:09)
@iamamodel: Dunno what sort of boring childhood you grew up with, but this absolutely looks like the metal pipes everyone I know had growing up, smoking the devil's lettuce
www.pinkbike.com/photo/20489455

IsaacO (Apr 22, 2021 at 12:25)
My favorite contest I've ever been a part of, super props to Jill and everyone involved and thanks for posting some of the runner-ups! Can't wait to see this bike on the trailzzzzzz

remote-local (Apr 22, 2021 at 18:33)
Got a wasp stuck in my helmet on a fast descent while road cycling the other week. Little f*cker stung me half a dozen times across my temple. Head felt like it was on fire for the next 12 hours. And that’s my wasp-related story!

synaptonaut (Apr 25, 2021 at 7:12)
It's nice to see some art on bikes. Can we see more of this instead of the boring banded colorways please? I'm not saying they need to look like the featured frame, but the possibilities are endless.

mammal (Apr 22, 2021 at 10:34)
Absolutely great paint job, if I didn't COMPLETELY DESPISE WASPS, it'd think it was appealing. I'd want to jump off that thing and freek right out, pretty much every moment of riding it.

timotheysski (Apr 22, 2021 at 10:22)
i will scream if there isnt some form of RideWrap or frame protection on this

Thirty3 (Apr 22, 2021 at 15:40)
All those ideas were super cool. The dart frog and the tv were especially neat. The hornet is amazing artwork as well.

pourquois-pas (Apr 22, 2021 at 10:17)
The paint job is amazing. Love the Frog concept, but the color scheme better compliments the latest Trek pallettes.

BoneDog (Apr 22, 2021 at 10:28)
so gross this paint job makes we wanna barf, because i hate hornets they give me the heebeegeebees