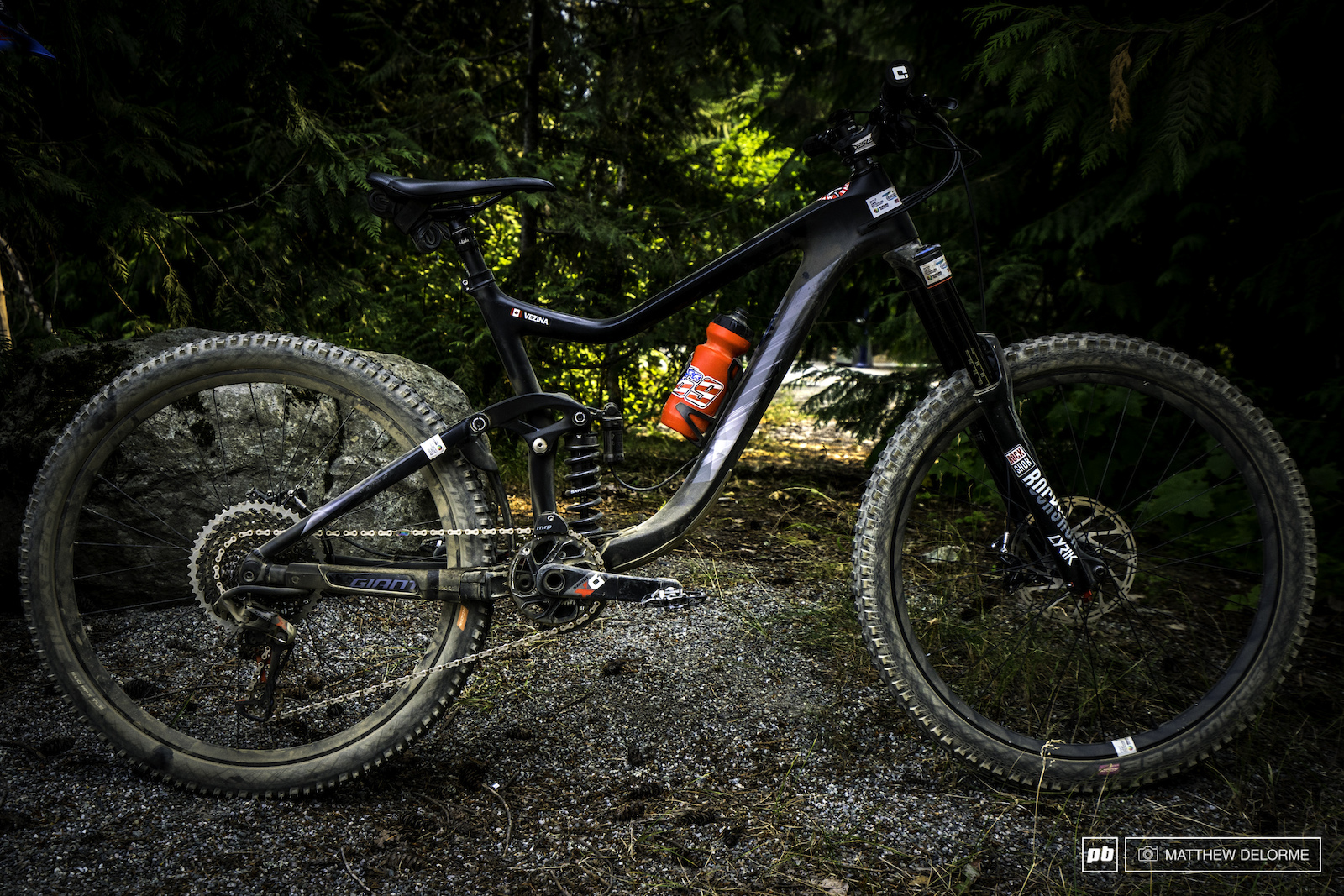 BIKE CHECK
Mckay Vezina's
Giant Reign
Fresh off a 16th place finish at EWS round 6 in Aspen, Colorado, 21-year-old Mckay Vezina is hoping to make his way even further up the rankings this weekend in Whistler. He'll be aboard Giant's newly updated Reign, although his bike will be undergoing a few modifications to transform it into an even burlier race machine, one that's ready to take on the steep, long, and rough tracks that await racers on Sunday.

In McKay's words, “It's a beast. As the week goes on we're getting rougher and rougher on the track, so we're upping fork size, going up to 180 millimeters of travel, and Code brakes are going to go on with 200 millimeter rotors front and rear. It's basically turning into a mini-DH bike. I've never done a race that's going to be this rough before, so I'm excited to see how it goes." 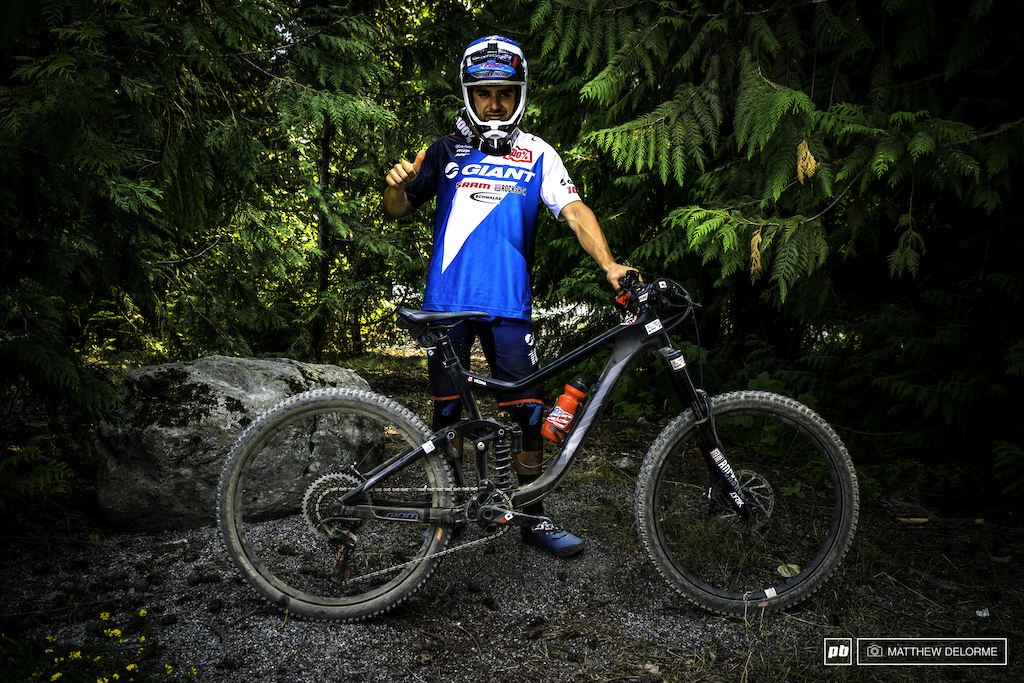 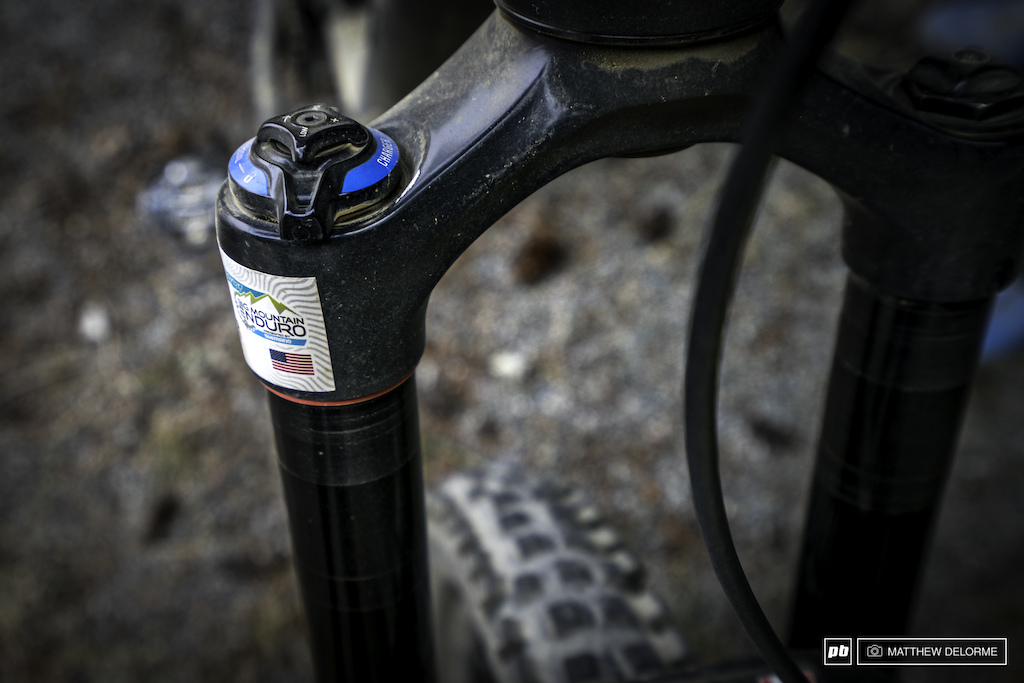 By the time race day rolls around Mckay will be rocking a 180mm RockShox Lyrik set up with 78 psi and 2 tokens. 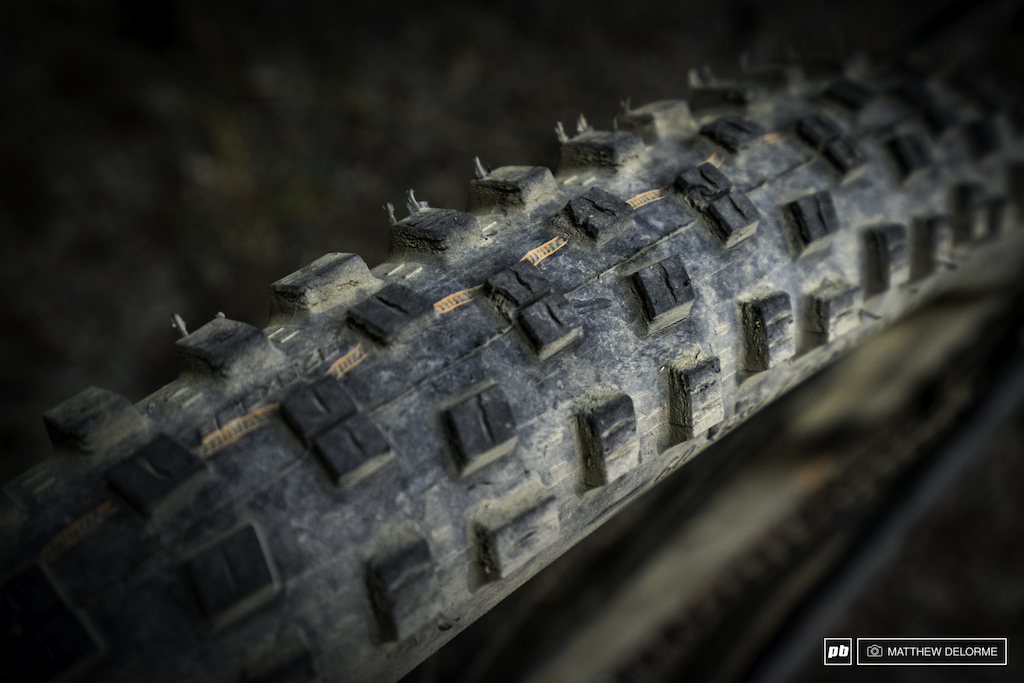 In the rear, there's a Schwalbe Nobby Nic inflated to 26 psi... 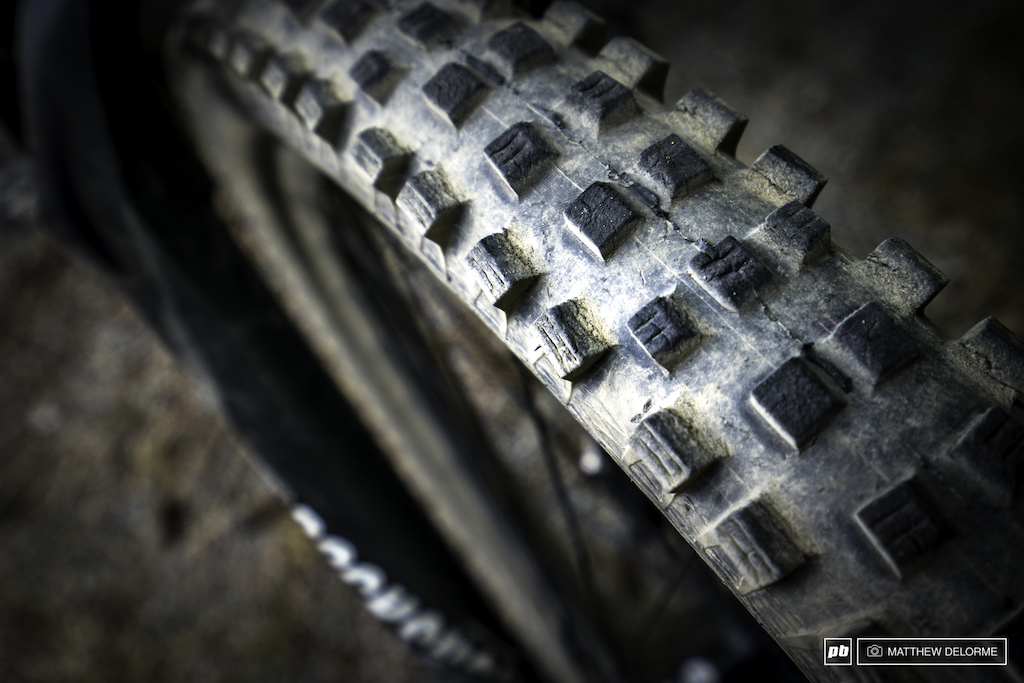 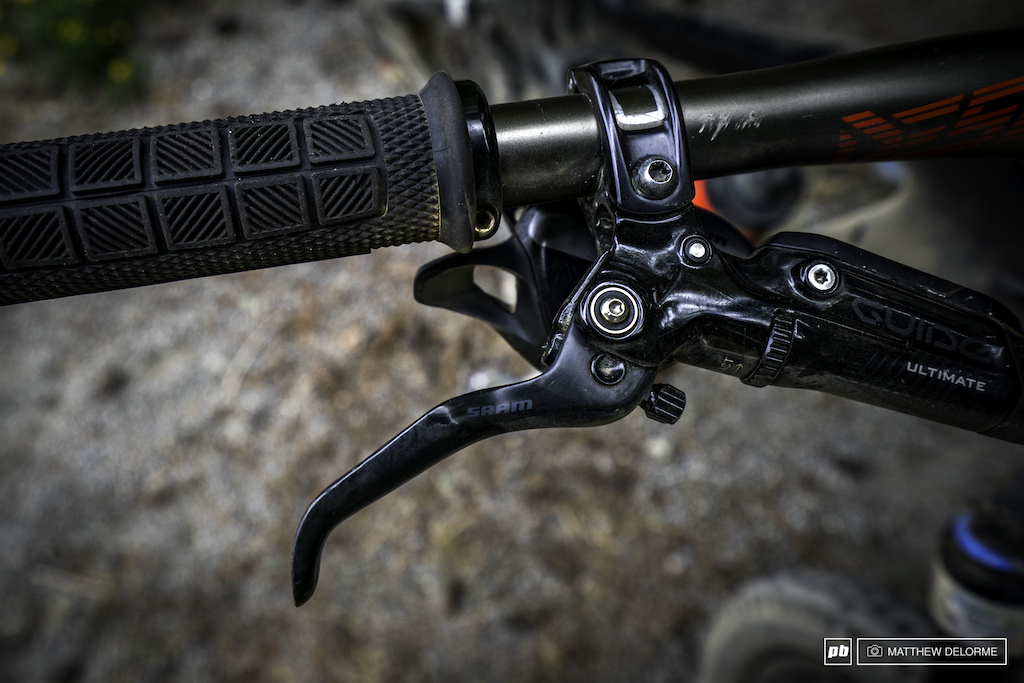 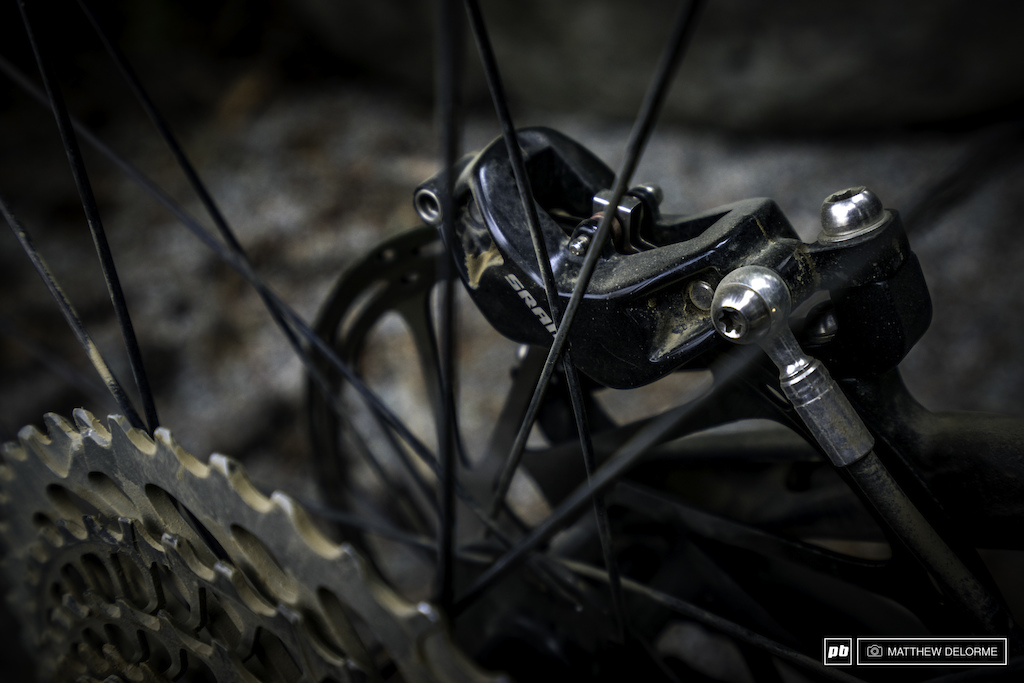 Mckay ran SRAM's Guide Ultimate brakes in practice, but those will soon be swapped out for a set of Codes in order to have the maximum amount of stopping power, a necessity on the technical course. 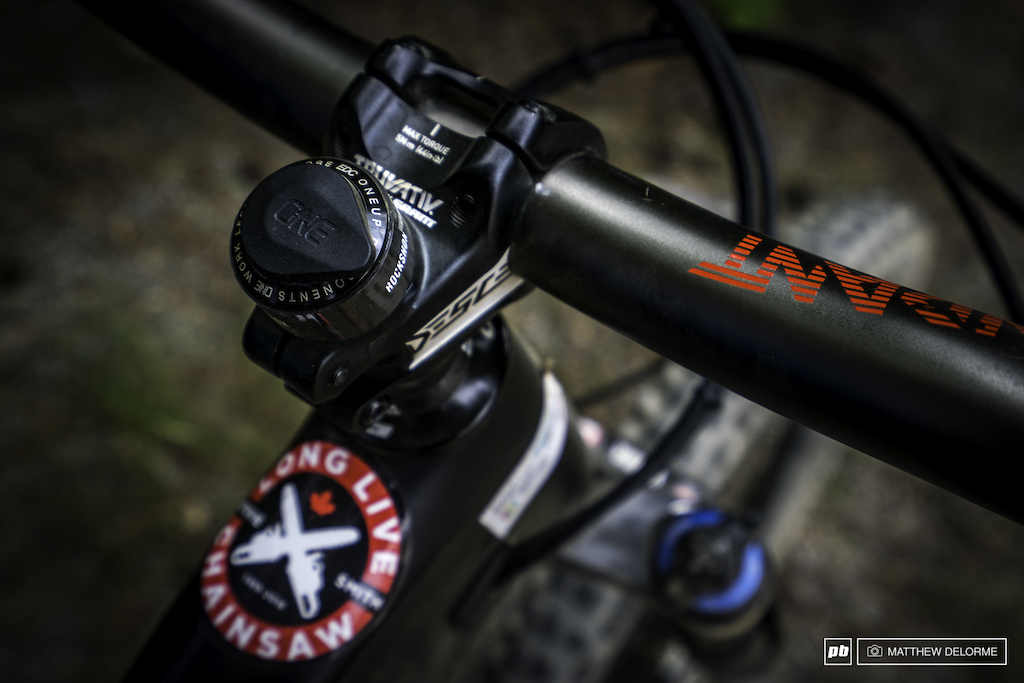 A 40mm Descendant stem is clamped to Truvativ Descendant bars, with a OneUp EDC tool tucked into the fork's steerer tube. 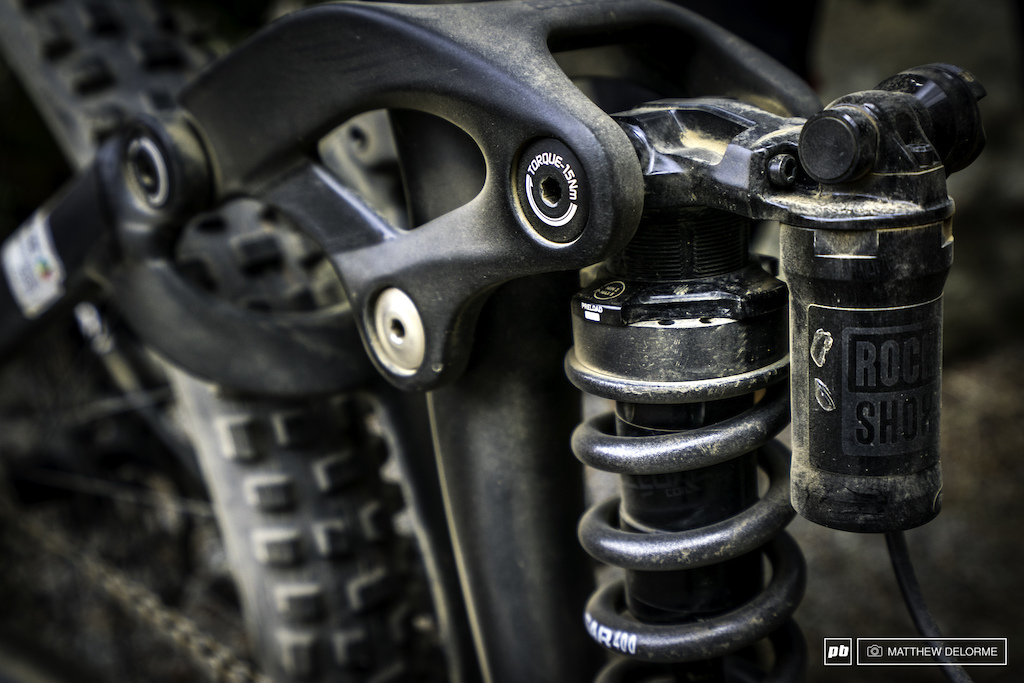 A 400 lb Super Alloy Racing sping has been installed on a RockShox Super Deluxe Coil, complete with a remote lockout. 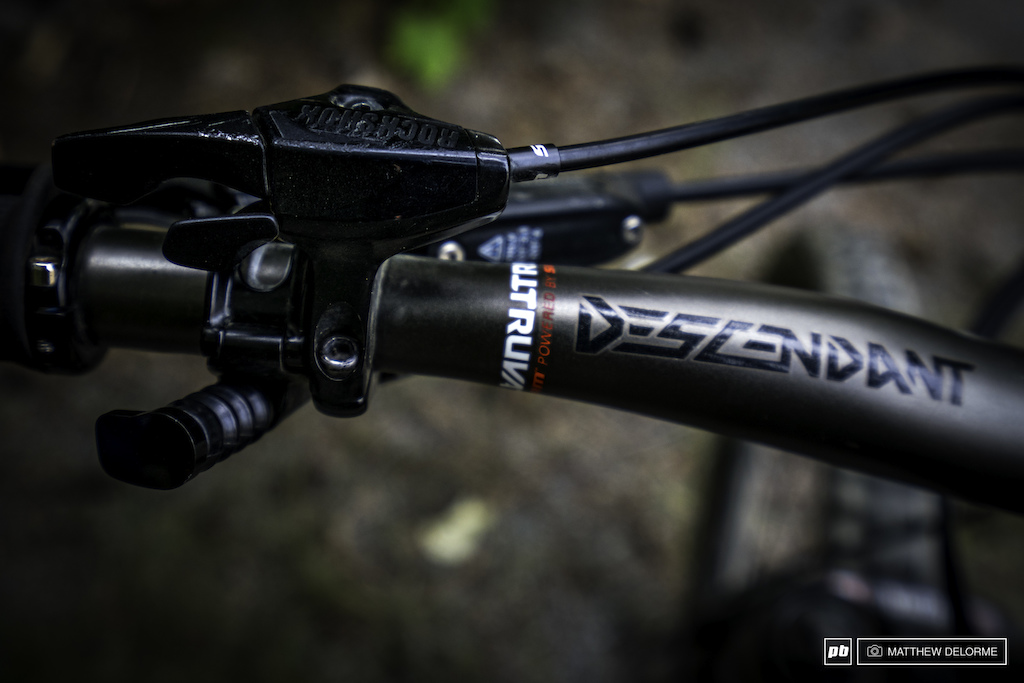 Coil sprung shocks are going to be a very common sight this weekend, and the remote will help on the punchy mid-stage climbs, as well as the long uphill transfers. 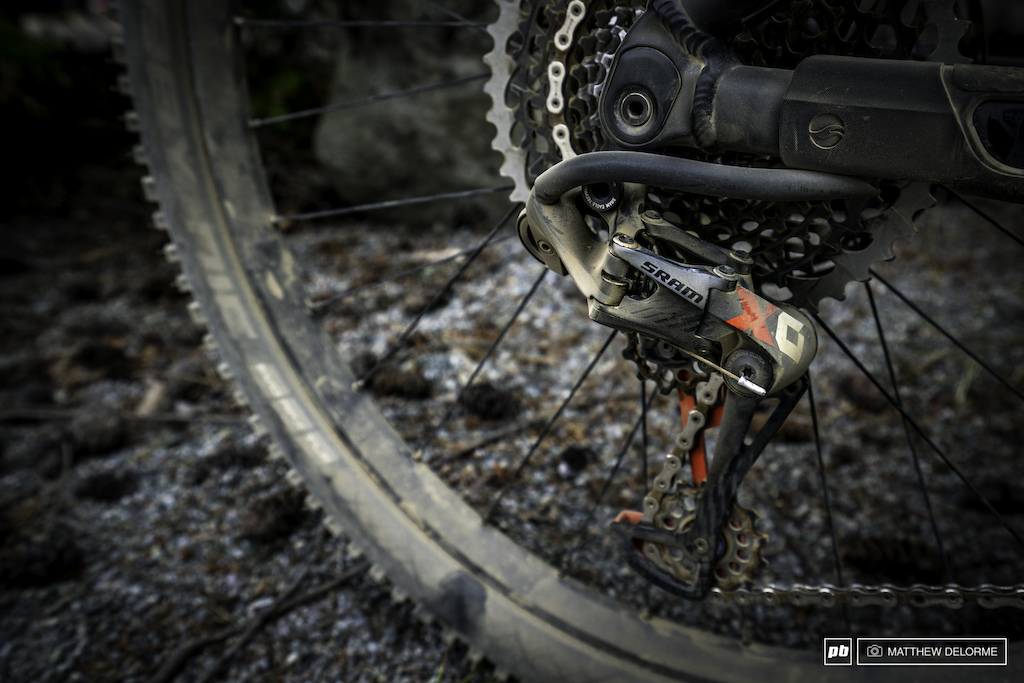 A length of rubber tubing has been installed over the rear portion of the derailleur housing to help protect it from the rocks and debris that'll be flying once Mckay's on course.

Mckay's bike setup is fairly close to what any rider could purchase from their local shop, and he says, " I ride it pretty stock; I don't run anything too special. I like the bikes just the way they come - Sparky my mechanic does a really good job setting it up."

WAKIdesigns (Aug 11, 2017 at 0:44)
Wait wait wait - in the last sentence, does he mean that proper setup of a basic bike is more important than buying bling and cutting weight? That approach will not make you popular on large group rides...

Benito-Camelas (Aug 11, 2017 at 5:38)
Nah, the most important thing is to be in good shape to pedal up and have a nice bunch of skills. If you lack the former you can always take some kind of stimulant to improve your performance free of punishment here

patrickbatemanworldtour89 (Aug 11, 2017 at 8:35)
Nowhere near as important as fashion though, my multi-neon clownsuit is what makes me fast. Mainly because I'm running away from all the people laughing at me all the time so they won't see me crying.

jaredmh (Aug 11, 2017 at 10:35)
@bogey: At some point I think they must just be joking. They all say it, and none of them appear to be running a mostly stock bike. Maybe they just don't remember what the bike looked like stock.

spoothead (Aug 11, 2017 at 0:46)
How in the bloody hell does he plan on racing a nobby nic with 26 psi in the rear? Can someone confirm that he's running some sort of insert. If I so much as look at a nobby nic with less than 30 psi it'll get a pinch flat.

jamesbriancrilly (Aug 11, 2017 at 2:19)
@panaphonic: Would love a super gravity Nobby Nic. Pinched the sidewalls on a Snake Skin so had to use something else.

tiagofernandex (Aug 11, 2017 at 2:21)
I really hope they release the tyre with super gravity casing, I like the tread but I can't use such a fragile casing, and the same applies do Vezina...i think..!

pav4 (Aug 11, 2017 at 6:20)
Isn't that the new Addix version of the Nobby Nic with the orange line on it?
I wonder if something has changed between the previous model and the new addix version.

Trilliamiano (Aug 11, 2017 at 7:59)
@panaphonic: Check the pictures of the tire casing, I was surprised at what I saw. You can see it's not the super gravity, just the tubeless easy snakeskin. I've got the same tire on the read of my trance right now and I'm going to run it at a bike park this weekend. We will see how it feels. Luckily I'm only 145lbs so I may be able to get away with it.

reks (Aug 11, 2017 at 8:52)
This has been my luck with NNs - unacceptable as a rear tire for anything more than "easy" xc riding. This has happened to three tires now. I'm going back to Maxxis.

The casing is gossamer thin.

mdhorner (Aug 11, 2017 at 9:06)
Even a DH casing MM at 26 psi won't last the first stage without some sort of insert or a whole lot of caution. The tracks were so rough and blown before practice, it's only going to get more wild!

WAKIdesigns (Aug 11, 2017 at 12:47)
@reks: this has happened to nearly every single Schealbe tyre that I have owned, I even managed to achieve that with center knob on a climb. But I may try Schwalbes again with procore inside. After all the durability is their only downside, important but still. Their grip to rolling resistance ratio is astonishing in my eyes. The other XC tyres don't exist for me, the grip on Schwalbe semi slicks is ahead of anyone else. We'll see. Minion dhf maxxgrip has been THE pause best tyre that I have ever owned. I'm eager to try MMary in soft

ddmonkey (Aug 11, 2017 at 2:53)
When the Pro's slap a 180mm fork on a bike designed for a 160mm fork do they do anything else to keep the geo stable or do they just go with a slightly higher BB, run a little more sag and everything is fine? I'd be interested to know as usually bike companies say putting a 180mm fork on a 160mm bike will result in a fiery death...

ibishreddin (Aug 11, 2017 at 6:39)
Whistler is very steep so when he is slotted into that steep terrain, the bike's geometry is preserved as compared to a 160mm fork where it would dive more than wanted creating steep head angle

dualsuspensiondave (Aug 11, 2017 at 7:28)
They don't adjust the sag any differently. It works just fine, the manufactures use that as a disclaimer for people putting ridiculously long A2C forks on which can break the headtube off. They don't seem to care as much these days, as the frames are much stronger than they were 5 years ago.

MTBrent (Aug 11, 2017 at 4:50)
You should follow the UCI WC Enduro Series. It's a single stage and the liaison to the top is via chairlift. I believe you're allowed tech support at the top, too. I think Red Bull might even cover it live...

atrokz (Aug 11, 2017 at 6:27)
@MTBrent: I heard that's where the fast guys in enduro start in, to prepare for their illustrious EWS careers.

justanotherusername (Aug 11, 2017 at 8:04)
Still on the shorter side compared to many modern bikes that are pushing 470+ in large now though.

435 sounds like an average medium for this kind of bike currently.

andreabonasia (Aug 11, 2017 at 10:29)
That Nobby Nic has an orange strip, that would make it an Addix Soft compound Nobby Nic. According to Schwalbe website there's no such a thing.
www.schwalbe.com/it/offroad-reader/nobby-nic.html
NN is only available to public in the blue Speedgrip compound.
Ergo, it's a prototype and as such it could be easily in Supergravity construction or whatever.
Personally, I'd be partial to a SG NN. Yup.

neologisticzand (Aug 11, 2017 at 6:34)
Are they hard to get a hold of? I have a brand new one sitting at home and didn't have a hard time getting it, but maybe I got lucky? Genuinely curious about this.

neologisticzand (Aug 11, 2017 at 8:51)
@YouHadMeAtDrugs: Yeah, that is my experience as well. Just bought a new Santa Cruz and it comes with the remote.

timmytuckshop (Aug 11, 2017 at 5:31)
What's that fine beigey/brown effect especially on the wheels and lower parts of the bike? Looks most unusual.

wpplayer18 (Aug 11, 2017 at 9:33)
I believe it is a customization down by the racers themselves to kinda make their bikes a little more unique. Most of them call it "dirt"

danielfox (Aug 11, 2017 at 0:57)
Surprisingly he is not running the latest lyric's internals. What's with that McKay?

Dude has got the right inspiration.... Miss those two wheeled legends mad :'(

MikerJ (Aug 11, 2017 at 16:50)
Would love to see this coil clad rig in a scaled down all-mountain-trail bike size! After I rcently went coil on my trail bike doubt I'll go back to air.