Jul 16, 2021 at 9:57
by Alicia Leggett
Share
Tweet
Carson Storch announced today on Instagram that he broke his collarbone jumping from a helicopter when the rotor wash caught his wheels before he landed. Luckily it seems like his recovery will be relatively straightforward and he should be back in action soon.

Carson previously broke his collarbone at Joyride in 2015, and it seems like he re-broke some of the same spots this time and bent the plate that is installed. He also fractured his tibial plateau earlier this year, so hopefully he can stay in one piece for a long time once his collarbone heals. 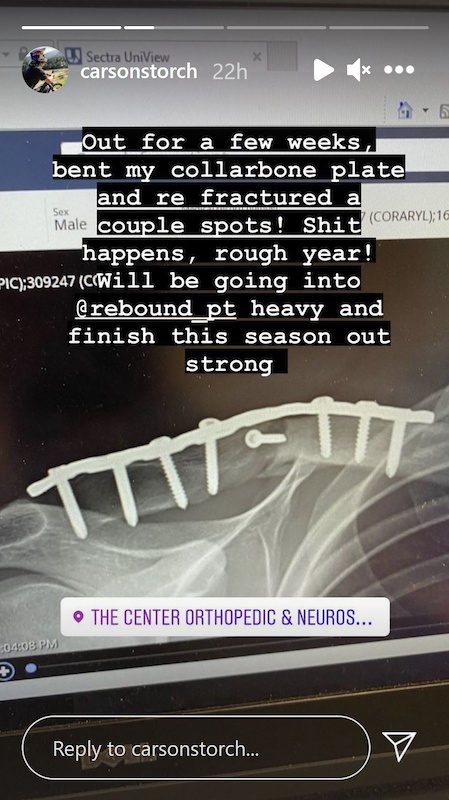 Helicopter rotor wash is no joke. In the comments on Carson's post, both Ethan Nell and Fabio Wibmer said they have had similar experiences. We look forward to seeing Carson's finished media project, as it sounds like he'll be trying again once he is back on the bike, but we hope he and other riders can stay safe both in the air and on the ground.

CSharp (Jul 16, 2021 at 10:53)
Guess the pilot didn't wash his helicopter and so the guy "fell" out with his bike Wink Keep your helicopters clean, people. It's no joke! Outside fail of the week!

HankHank (Jul 16, 2021 at 10:08)
You think the Pinkbike employees have had a shitty week listening to our moaning, and then you see a headline like this! The MTB way of life is a crazy one, cheers all, it's Friday, there's no paywall, and I managed to manual about 5 metres today, yeeeaaaaahhhhh!

joshroppo (Jul 16, 2021 at 13:43)
When the normal reaction to a headline like this is, "sounds about right", maybe we've reached the point of Roman Empire bloodsport entertainment.

Glad he wasn't caught in the rotor itself!

spl75 (Jul 16, 2021 at 13:14)
Sorry but surely this was accident was totally predictable, just try and stand under a low hoovering helicopter and we'll you can't! Hope he gets better soon.

Dav82 (Jul 16, 2021 at 10:04)
Pretty sure if I jumped from a helicopter I’d come away with a bit more damage than a bust collarbone. Fortunately I don’t know anyone with a helicopter to try…..

I have a plate that looks exactly like that -- 7 vertical screws and a horizontal lag screw. My first thought was "shit I thought I never had to worry about that collarbone again!" Guess not?

iamamodel (Jul 16, 2021 at 17:19)
I immediately thought of Glen Plake doing this on skis, but your snowboarder takes the cake. Wow.

NoCOOak (Jul 16, 2021 at 18:12)
@okaybro Exactly what I was thinking when I read the headline. Then saw the pic, good on you for posting it. Doesn’t even compare, Basich went HUGE that day.
And btw, that’s a self portrait of Mike Basich by Mike Basich. Figure that one out.

chickennuggetsaregreat (Jul 16, 2021 at 10:05)
If PB didnt sell out and build a paywall Carson would’ve landed this. way to f*ckin go guys

chickennuggetsaregreat (Jul 16, 2021 at 10:12)
not gonna lie prolly the dumbest comment I've ever posted, sorry you had to read that

Peally (Jul 16, 2021 at 10:14)
@chickennuggetsaregreat: Meh, I laughed. Might be your own personal dumbest comment but it doesn't even hit the iceberg of stupid comments that've been posted over the years.

sonuvagun (Jul 16, 2021 at 10:28)
@chickennuggetsaregreat: Yeah, it should read: If PB hadn't sold out....
It's not uncommon to forget to use that past subjunctive tense.
Rest up and come back sharper.

chickennuggetsaregreat (Jul 16, 2021 at 17:12)
@sonuvagun: thanks man, my brains been fried by reading a law textbook all day I need some rest before i post more comments on here

chickennuggetsaregreat (Jul 16, 2021 at 17:13)
@Peally: haha to be fair i think the rest of the internet has the stupid comment department covered pretty well

He is a sell out.

SATN-XC (Jul 16, 2021 at 10:02)
damn! hopefully you are back at it sooner rather than later, best of luck on a quick recovery
...was the heli needed to get to this location or simply for the drop (I assume a combination of both)? If only the latter....there has to be a better way to pull that off (though it is badass)

carson-storch (Jul 16, 2021 at 19:10)
Couldn't you say any big move on a mountain bike/or in action sports is stupid? This is an idea I've had for quite a while and wanted to attempt to make happen. And I did attempt. Don't disregard someone's progression as stupidity... respect or keep it to yourself.

zede (Jul 16, 2021 at 23:10)
Aren't most jumps, tricks, Stunts etc stupid ? Extreme sports have never been about doing smart things, its about athletes challenging themselves.
it's a bit odd to realize this only in 2021

DoubleCrownAddict (Jul 17, 2021 at 7:29)
I think it can be stupid and also spectacular and entertaining at the same time.

mtb-scotland (Jul 19, 2021 at 2:42)
@leviatanouroboro: That ain't me BTW and what does someone's skill level got to do with thinking jumping out of a helicopter with a bike is stupid?

ReddyKilowatt (Jul 20, 2021 at 8:30)
Being aware of rotor wash when jumping out of a helicopter with your bike is good, practical knowledge for all of us to have. Thanks for being educational, pinkbike.

Chris-Sasquatch (Jul 16, 2021 at 13:54)
Kind of makes you wonder if the plate helped in any way, or if having screws in there created stress points and made it worse. Like what would have happened to the bone if the plate wasn't there..?

SuperHighBeam (Jul 19, 2021 at 12:24)
That seems like crappy thing to have to refix when you already have that much hardware holding it together.