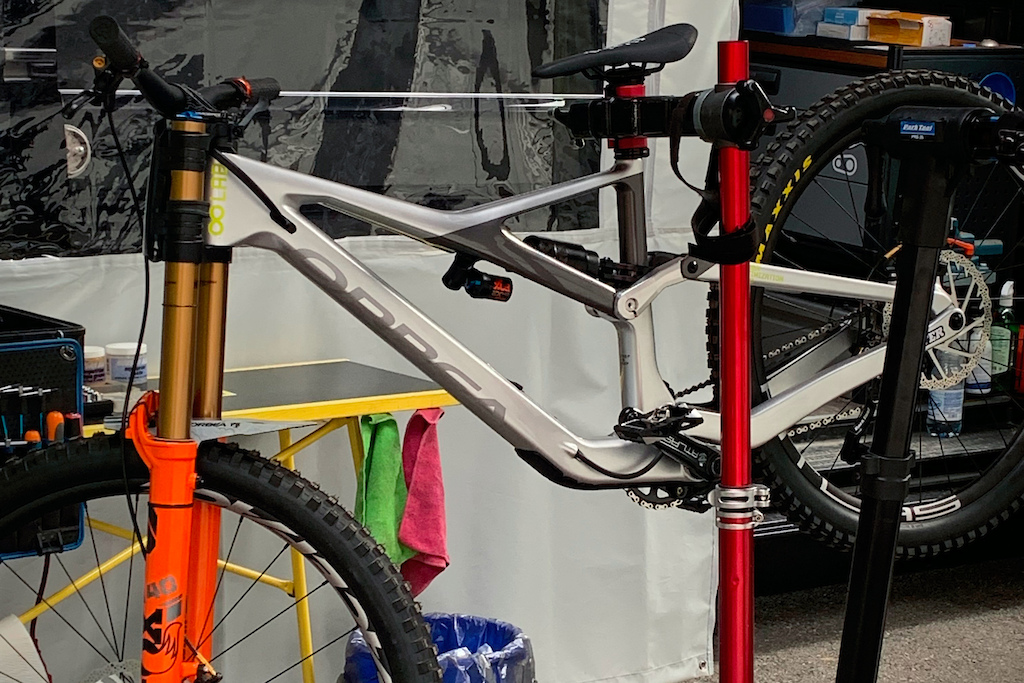 While Orbea does not produce a DH bike of its own, we have spotted something potentially new at the Lourdes World Cup.

Previously Martin Maes had told us that he would be racing the DH World Cup, but we did not know what bike he would use. Now at the first round of the World Cup we have a better look at the Spanish brand's bike for Martin Maes. 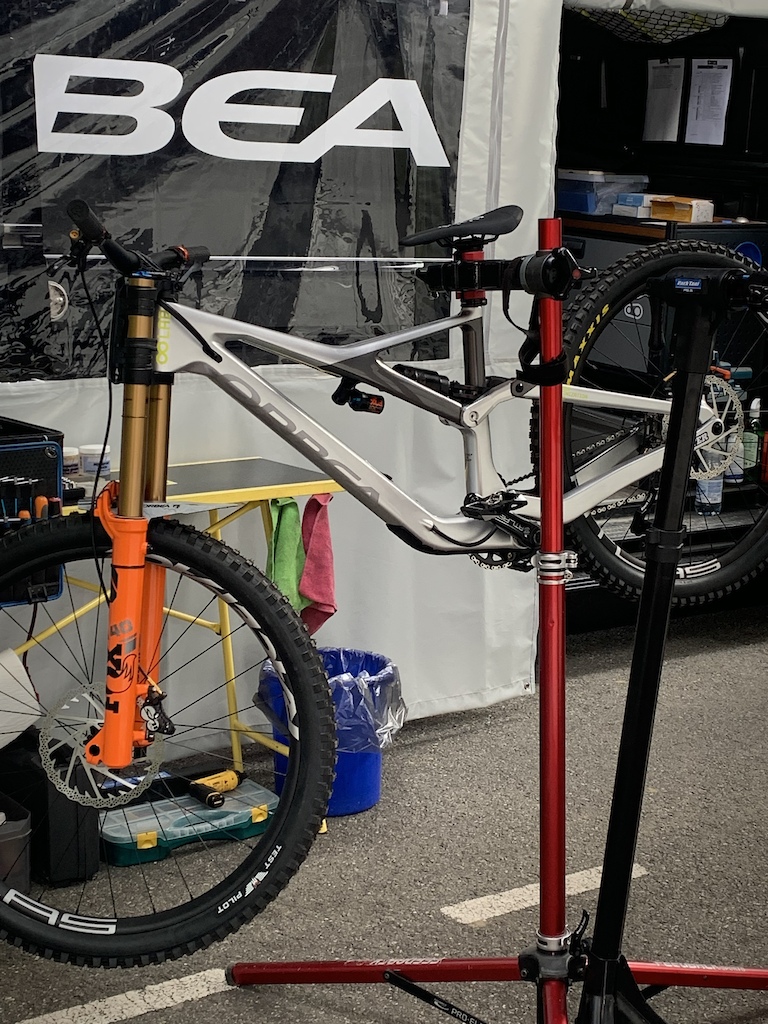 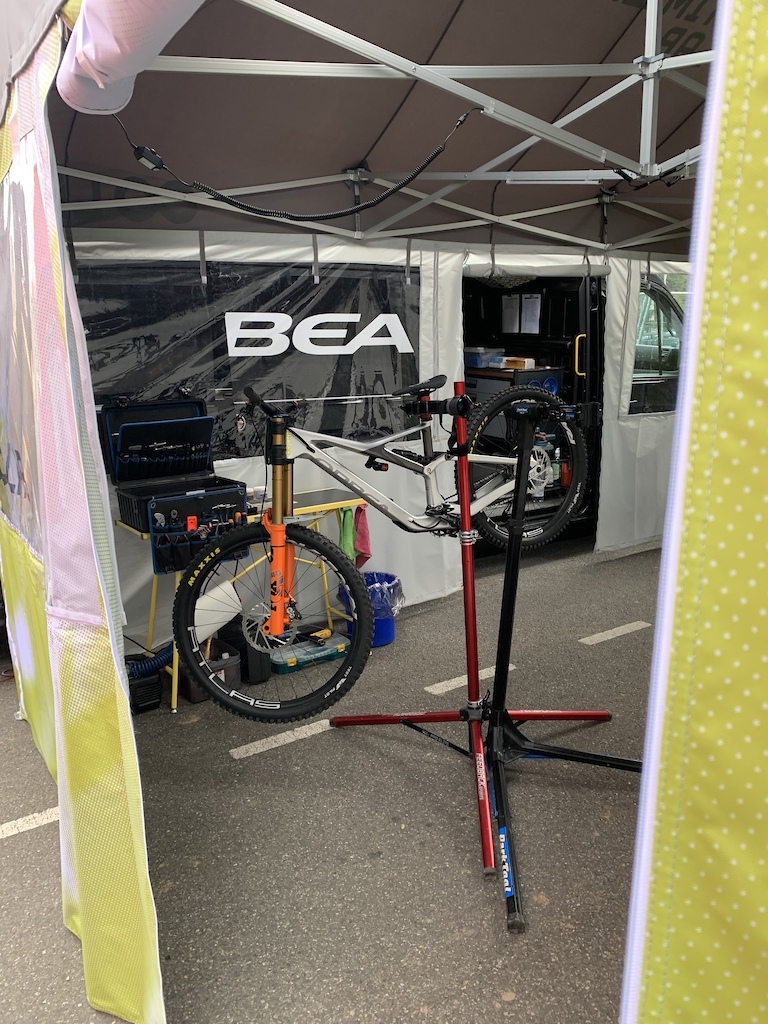 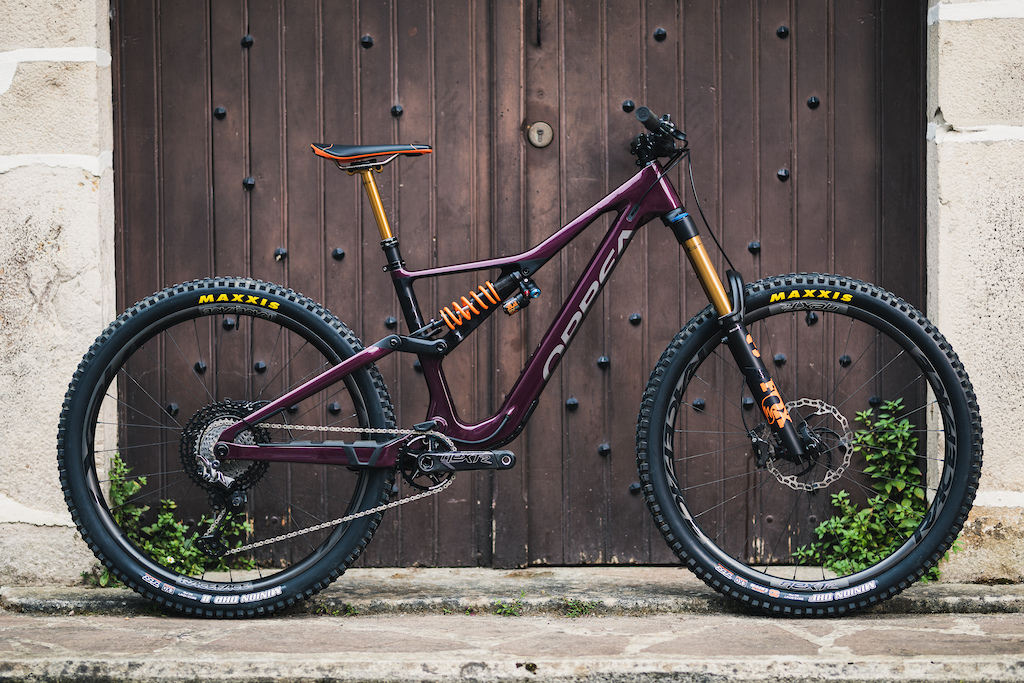 A Rallon in enduro guise

While this could be the start of something new from Orbea, riding an enduro bike with dual crown forks is definitely nothing new for Maes. To make his GT Force ready for the rigours of a downhill race Maes swapped out the standard 170mm fork for a 190mm Fox 40 with the standard 160mm of rear travel remaining the same. 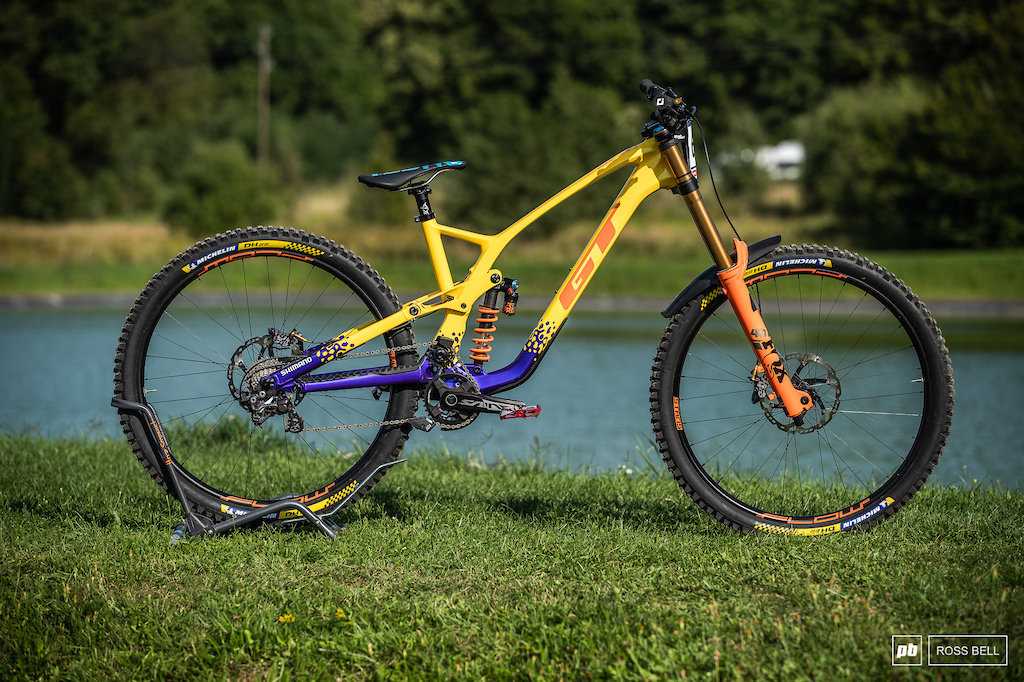 Martin Maes' Force enduro bike with a dual crown fork from Maribor last year.
We previously asked Martin about racing DH on the GT Force, and he said, "It was not the best idea to be honest! I gave it a go because my enduro bike had a newer geometry than the downhill bike. However after a couple of training runs, I soon realised that the stiffness of the frame wasn't adapted to the need of DH racing. It was rough & tough especially with the blown out conditions that we had."

It sounds like adapting an enduro bike to race a World Cup level downhill wasn't exactly what he wanted, so it will be interesting to see how he finds the Orbea this weekend.

Following us spotting the bike at Lourdes, Orbea sent us this:

leviatanouroboro (Mar 25, 2022 at 7:16)
It’s all good. I think anyone trying to convince themselves that enduro bikes are up to the task of wcdh tracks is a bit silly.

onawalk (Mar 25, 2022 at 9:08)
@leviatanouroboro: Fair statement
Race bikes are race bikes, no matter the category, fully optimized for the task at hand, whether it be XC enduro or DH.
I do still love to see enduro bikes with DC forks, something about it screams early 2000 freeride to me.
New Spire on the way, and I’d love to have a DC fork to bolt on for bike park days…

powturn (Mar 25, 2022 at 10:09)
Different photo angles, but that looks a lot like a longer, broader custom linkage on MM's dual-crown bike. Appears they're trying to tease a bit more travel out of both ends.

onawalk (Mar 28, 2022 at 14:16)
@leviatanouroboro: however, Did you see Connor Fearon on his Dreadnaught, and the Norco team on WHr is essentially a Range at Lourdes…..
The gap is getting more blurred for sure.

hardtailpunter (Mar 25, 2022 at 6:54)
That's a lot of words in the Orbea statement for saying that they aren't promising to build a downhill bike.

WarOnErrorism (Mar 25, 2022 at 10:17)
Beat me to it. Link on silver DC bike definitely looks longer and broader. If Maes felt he was getting beat up by his his old, overly-stiff, short-travel GT, I'd imagine Orbea will try and tease as much travel and compliance out of this new upforked-enduro setup as possible.

Or is it iTrack now?

Bob-Agg (Mar 25, 2022 at 9:57)
Didn't I read something about pivots getting even higher? I expect to see a Klein Mantra on the podium before the season is over.

swenzowski (Mar 25, 2022 at 6:30)
What kind of rotors are those? I saw Neko Mulaly is running the same ones even though he is on TRP brakes and Maes is on Saint brakes, whcih doesn't make sense, since the TRPs use 2.3mm rotors and Saint uses 1.85 or whatever standard shimano width is.

dirt-mcgirt (Mar 25, 2022 at 6:42)
I just listened to the latest downtime podcast with Neko and he mentioned using Galfer rotors

juliuskliemmtb (Mar 25, 2022 at 6:44)
I think they’re the new Galfer, that the Commencal Mucoff team also uses

Bob-Agg (Mar 25, 2022 at 10:02)
Would rotor thickness matter between brands? Surely the pads will still retract the same distance whatever the rotor.

JoshParsons87 (Mar 25, 2022 at 12:44)
@Bob-Agg:Galfer makes specific pads to match with their rotors depending on the brake brand. At least for retail they state specifically they should be used together.

btjenki (Mar 25, 2022 at 9:54)
Why is it that these articles try to pretend they can't figure it out by just looking at it? It's likely a 175mm Rallon (new bike) that can take a LT link for 185mm+ of travel and run a dual-crown fork and can sub in as an extreme enduro/DH bike like the Norco Range?

jamessmurthwaite Mod (Mar 25, 2022 at 6:11)
Our photographers are on the hill shooting practice at the moment so unfortunately will not process their images until this evening. Until then it's phone shots but we will update this some of their higher quality shots tonight

rol79 (Mar 25, 2022 at 8:44)
And if he makes it into the top20 all others are losers by spending alll the money on new developments that are just as good as an enduro Orbea

SonofBovril (Mar 25, 2022 at 13:08)
Interesting that after the poor experience MM had with the GT Enduro bike for DH that he would choose to try it again here?

jonas-stadler (Mar 25, 2022 at 5:51)
This is the weardest looking bike i've seen in a while. It looks like a bike from one of these Russians that put dual-crown forks on there 50$ hardtails and jump stairs to flat.