S.P.A.M. seems to have gotten ahead of the drive train game by introducing XX6 11sp that works great for both XC and Enduro. Sheman-Oh will be surely striking back hard, they will be pushing Die2 in knobby tyre format - the electronic storm is about to hit the MTB world anytime. But an (internet) friend of mine, working for S.P.A.M. tells me that Californians with German connections are nowhere close to being left behind in the E-bike world. 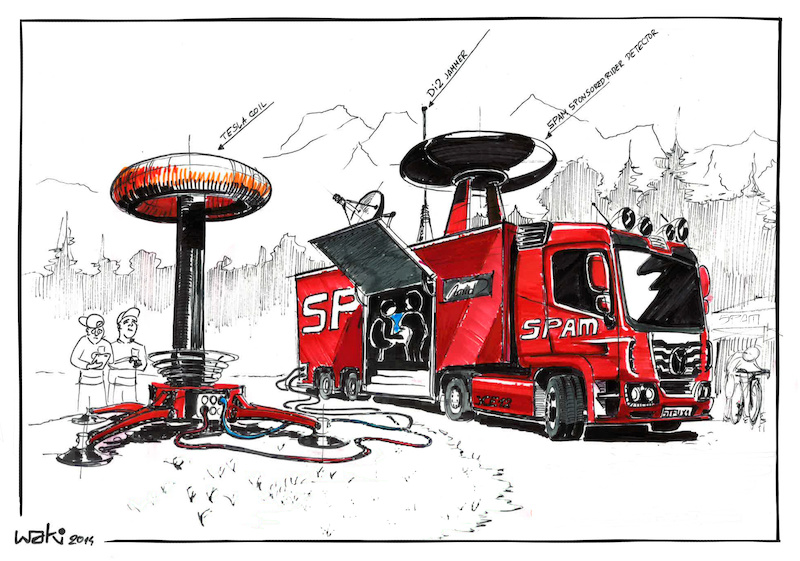 I got my hands on concept sketches of a relatively advanced development program called XE1, which will be a Cross-Country racing specific group. I had very little info so I can only interpret pictures and speculate, but well... some do that with even the most down to earth press releases... So, XE1 will be including a whole line of products, 11-speed drive train, brakes and suspension. Everything is wireless, even the brakes! Then they worked on suspension that has electronically controlled, automatic compression and rebound. I assume that it will involve anti-brake squat and anti-lock for the brakes. You may ask, but how do you power that? Batteries weigh a lot! SPAM seems to be close to solving that. No, they are not looking for some super batteries, it appears that they will be using a Tesla coil to power bikes on race courses! One of the current prepared fleets of SPAM trucks will be at every major XC race around the world, sending electricity to those who use XE1. 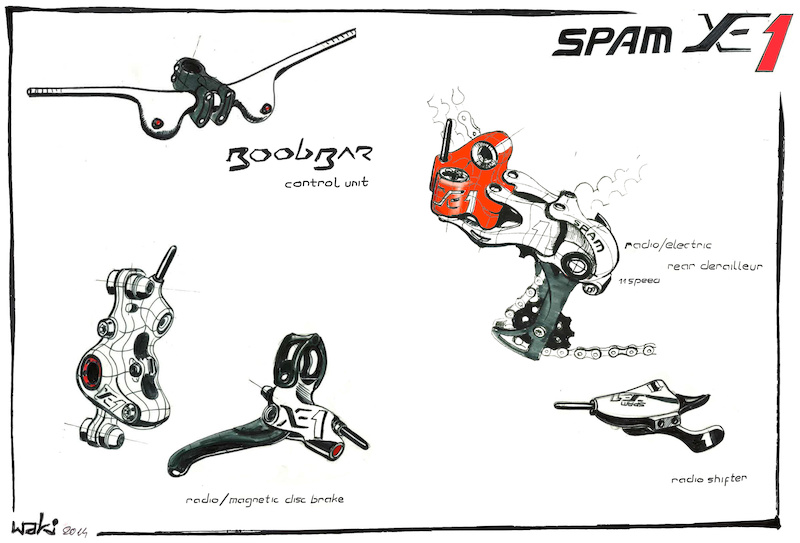 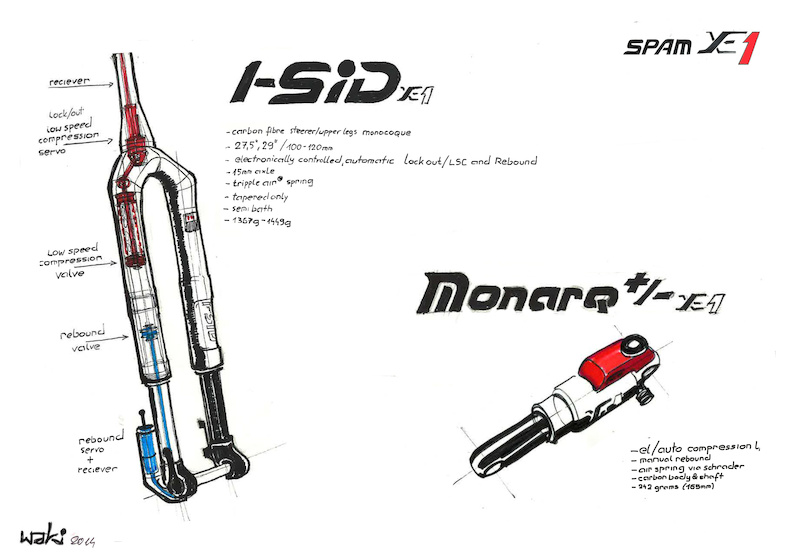 I don't know how the Tesla coil will ONLY power the XE1 equipped bikes, and not all others, but they have surely worked that out. Just as SaintEN from Sheman-Oh had a Cthulhu command stem this group features such devices as well, but instead of using kilometers of cables, SPAM keeps everything wireless inside of a handlebar called... Boobbar... 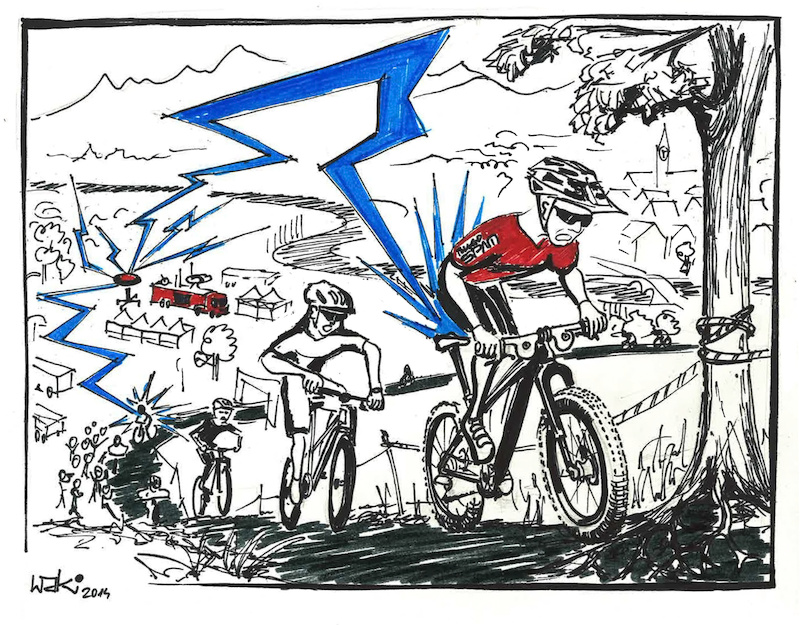 That raises ethical and existential questions, "how far can technology go, so that we can still call it MTB?", "how long until that Tesla coil powers electric engines on bikes?", or simply "where do we draw the line?" and "why do we bike?". I am personally as much in awe of such advanced technology as I feel some part of me would die if I used it. However my biggest problem with that XE1 group is: what if the truck is not around? The potential client will surely need to use heavy batteries. But then I remembered that most of us buy expensive race toys, imagining ourselves fighting for seconds on a race, that every new bit takes us higher in rankings than all the blokes who still roll on last year's stuff, given all those blokes are at similar fitness level as we are... makes perfect sense right? How often do we think: will that make any meaningful difference when riding with my buddies?

Disclaimer: This article is meant to be satire. My intention with it is to entertain you and eventually provide some food for reflection in case we treat our sport a bit too seriously. I honestly do not wish to insult or harm anyone or any company. Any resemblance to persons, names and places might be coincidental.

Clarkeh (Mar 26, 2014 at 0:14)
I WILL NOW CALL QUESTION TO YOUR SEXUALITY AND SPREAD FALSE RUMORS ABOUT MY HAVING INTERCOURSE WITH YOUR MOTHER.

WAKIdesigns (Mar 26, 2014 at 2:49)
so many large letters, OH MYYYY - le petit etiquette never killed anyone. Don't let the hype ruin the fun, never ever, see through it

shame Anchorman 2 was such a sh*t film...saw it last night and it should never have been greenlit

WAKIdesigns (Mar 28, 2014 at 0:51)
I am so touched by the general facination with the boobbar that I am considering making a special Boobbar issue on my blog for the 1st of April... fiberglassguy27 - I guess so

SithBike (Mar 26, 2014 at 12:06)
Then it's only a matter of time before people without the real boobbar start putting on fake ones that have no real function other than aesthetics. Just like the suspension on bikes you can buy at cheap department stores.

Just be at one with your own inner sloth! Therefore I prescribe: a day of naps, couch surfing, naps, being a d*ck about wheelsizes, and a nap before bed.

waxyfeet (Mar 26, 2014 at 1:51)
Generally, my daily working life / routine involves goofing off and browsing Pinkbike and systematically neg propping every single thing Waki says. These mock-articles I do however find amusing.

i also love the creativity that WAKI has, not only are the drawings superb, but im jelly of him being able to come up with so many new names and parts!

dglobulator (Mar 26, 2014 at 0:21)
BONKERS!!!!!! Entertaining as usual but, the real wiring issue here is are the wires that connect to Waki's 'mental work space' in his brain floating around free in there.

kamenko (Mar 26, 2014 at 2:07)
your connectio from S.P.A.M. gave you false data fos XX6 groupset - the cassette has 16 chainrings while X06 will have 15, because over time 1 x 11, 12, 13 and 14 speed drivetrains proved to be insufficient. And in case when you're out of tesla coil reach it starts to drain power from your competitor's cell phones and GPS devices who unfortunately still ride cable actuated mechs and primitive hydraulic hose conmected brakes.

hamncheez (Mar 26, 2014 at 7:44)
Hahaha! Always reads like it got sent thru google translate- from Polish to Japanese to english!

hamncheez (Mar 26, 2014 at 19:31)
Haha! Correcting MY english!! In my defense, I am Vietnamese American! Of course I was born in American and I have never been to Viet Nam

WAKIdesigns (Mar 26, 2014 at 8:55)
yes, you will be able to adjust the strenght of the spot by twisting the lens... holy moly how that concept kicked off... next time I draw only boobs with enduro tattoo on them...

WAKIdesigns (Mar 26, 2014 at 6:20)
Disclaimer nr#2 I promise to not post any drawing of the lady parts again... apparently it escalates pretty quickly... BTW how do you guys like the inverted fork? I don't think it is stiffer than a standard design and saying that they are used in moto means nothing.

groghunter (Mar 26, 2014 at 7:36)
Ok, I'll bite: I've been running an inverted DH fork for a decade, as well as conventional forks on my smaller bikes. Inverted feels different, and I like the way in which it feels different. It feels smoother to me, and more responsive, perhaps due to the lower unsprung weight. I can't count the number of times the "lack of stiffness" has saved me from a nasty bail, as the front wheel deflected slightly instead of hitting something dead on. I would point out that it doesn't feel ANYTHING like a smaller stantioned fork that's been pushed past it's limits: the noodly feel that you get there, doesn't feel the same as a USD fork allowing slight amounts of wheel deflection. Oh, and the lifespan of the seals makes conventional forks look like a joke: I've only replaced them once.

If you included a small servo between each stanchion and its corresponding dropout you could use the inherent flex of the usd design to allow for a simple traction controll/ stability management device much like the system than found controlling the front ailerons of the Eurofighter.

You could then also include a small radar sytem into the Cthulu stem which combined with the dropout adjustment servos, would allow the fork to steer around small trail defects for you, giving you more time to comment on pinkbike while posting a winning time on the world cup non-competitive trail riding competition.

As far as the Tesla radio powered ecu, it may prove difficult to stop non-competetive competitors from leeching off your power, but if each SPAM equipped bike was supplied with a small lightweight faraday cage and earthing system, you could effectively use the tesla coil to EMP all non SPAM bikes, preferrably just before a steep rock roll or sharp corner.

WAKIdesigns (Mar 26, 2014 at 7:58)
groghunter - got me a mermaid!!! Yea I was just kidding. I personaly stay with my old fork and I'm not even buying the new Pike, BUT if it gives up and there is a reasonable USD option - why not? I can even take a Lefty, I don't give a damn.

gabriel mission9, yes that sounds reasonable. I think they thought that out with the electronic war. I guess as soon as such technology moves to road racing, we will see some real strategy games! UCI will go - they're cheating! - what?! what now, cortizon in penis enlargement creme?! - no! they're jamming the signal!!!

cuban-b (Mar 26, 2014 at 8:56)
the reduced unsprung weight as well as the seals being constantly lubricated contribute to the smooth feeling of inverted forks. i agree with groghunter's assessment in terms of feel. i ran a shiver sc on my trail bike for a while. they lack torsional stiffness though. although the new inverted single crowns are supposed to be much stiffer (xfusion).

ddanielascensobabu (Mar 26, 2014 at 1:23)
So if i don't have money to buy this new tecnology, i buy an app for my android to hack his components ^^ they aren't more than me xD

finnrambo (Mar 26, 2014 at 0:28)
I love how he had to include the fact that the article is satire in the disclaimer, good ol Pinkbike comment section.

WAKIdesigns (Mar 26, 2014 at 2:30)
I always thought I that dials on modern forks are not nice to touch... hopefully this design will make people want to turn knobs a bit more! "Set and forget" - phuh! Where's fun in that?

poundsand (Mar 26, 2014 at 14:01)
Sounds like an expensive waste of time for sram... All this for what? To save a few grams from the cable/brake lines... And then making more room for mechanical error...?

I know people need to try new things to be the leading edge of technology but this seems pointless.

poundsand (Mar 26, 2014 at 18:25)
What will happen when your wireless derailleur sh*ts the bed and you have to send it away to be re-programmed.... Meanwhile normal people are still out enjoying a ride...

(not your point isn't valid, I got into riding to get away from that stuff)

amirazemi (Mar 26, 2014 at 1:25)
HOLLY SHIT, BOOBBAR IS SICK HAHHAHAH, AND HEY EVERY SINGLE ONE SHOULD WRITE ON CAPS LOCK IN HERE.

mudmandhbrazil (Mar 26, 2014 at 7:06) (Below Threshold)
Its suposed to be a satire but its not funny at all. That boobbar for exemple is like kids things...

cuban-b (Mar 26, 2014 at 10:48)
it's sad that someone would get their feelings hurt over a satirical handlebar name purely because they own one of the real ones. it's a handlebar for F's sake. pinkbike is SRS BIZ.

SithBike (Mar 26, 2014 at 12:17)
@mudmandhbrazil, I think your period has been going on longer than normal this month. You've been regularly PMS'ing for a while now. Why don't you go and make a article or video considering you are the only one that knows how to do it right.

mudmandhbrazil (Mar 26, 2014 at 15:52)
Blablabla. Comments on a denocratic world. My opinion can sometime be deferent from other person and I respect that if you dont. I never said I was right in nothing