Getting to Know: Nina Hoffmann 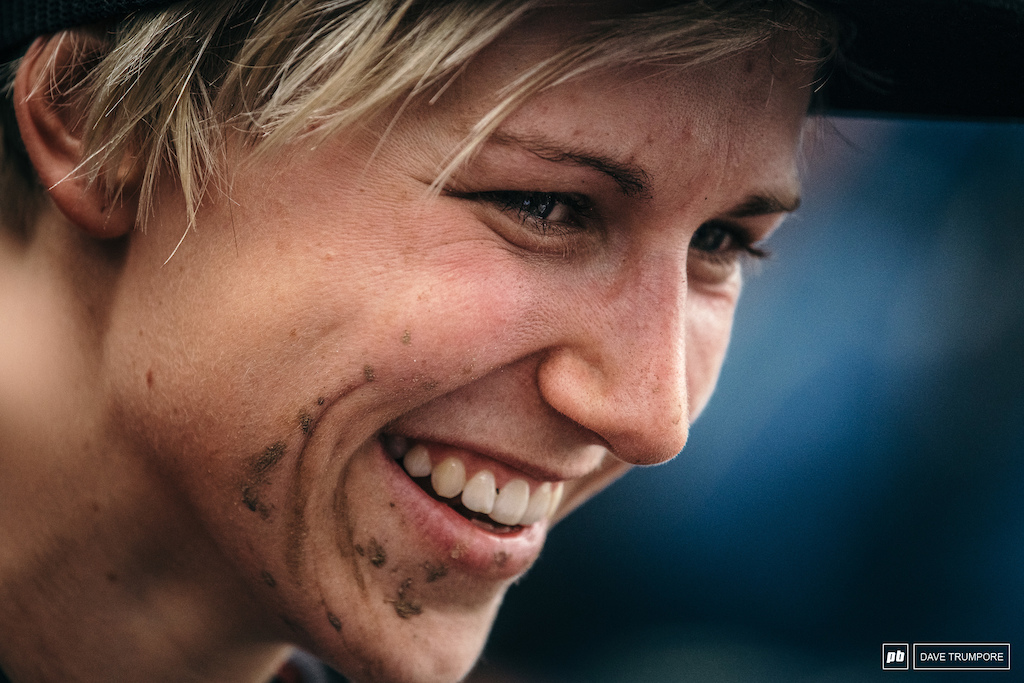 Nina Hoffmann
Three races, two podiums, Nina Hoffmann has taken the downhill world by storm in 2019 as she has come from seemingly nowhere to become one of the fastest women on the circuit. Nina has only been racing downhill for four years and competing in World Cups for just over a season but she has already shown she has the pace to mix it up week in, week out.

The last two races have been especially good for Nina as she picked up a third in Fort William, the first elite podium for a German this millennium, and went one better with second in Leogang the week after. We caught up with Nina to talk about how she got started in downhill, her breakout year and her hopes for the future. 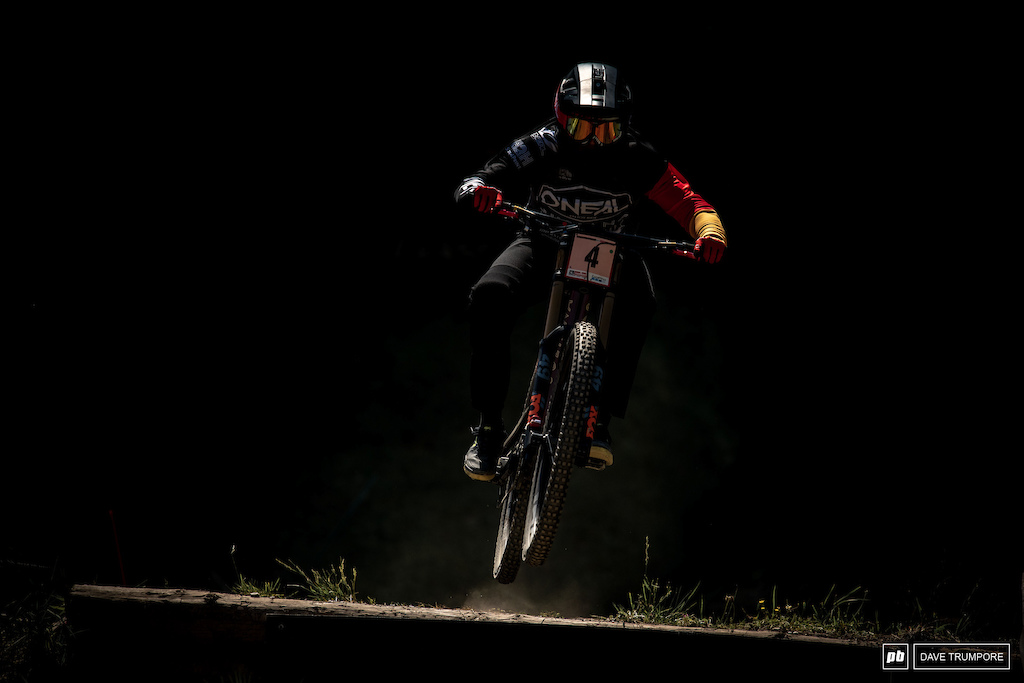 I’m from Saalfeld, a city in Thuringia, which is the state right in the middle of Germany. At the moment I live in Jena whilst studying.

It was in 2014 when I first met my ex-boyfriend. He is a passionate mountain biker and one year later he brought me into this awesome sport. At the time I was a javelin thrower, but not as successful as I wanted to be. So I wanted to try something new and I took part in my first downhill race. I won the open women category by a big margin – the decision had been made, downhill racing instead of javelin throwing! 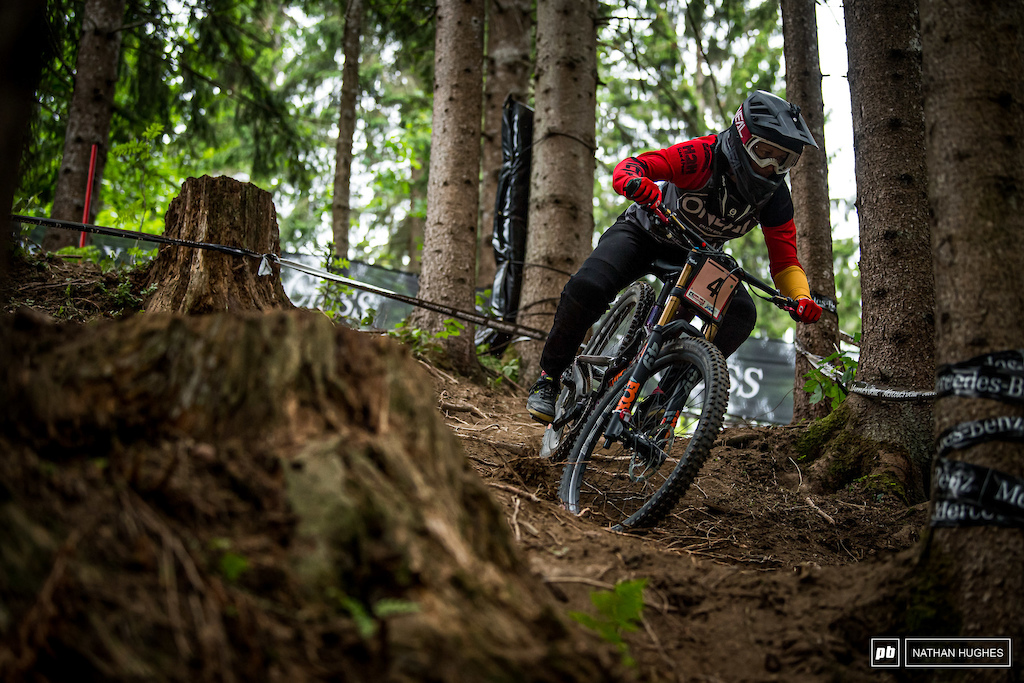 I’m riding my custom Juliana V10 for racing and a Juliana Roubion as a trail bike. For endurance training, I use my Santa Cruz Stigmata and I’ve got a Santa Cruz Jackal for some dirt jump or pump track action.

I’m a student at the university of Jena. At the moment I’m in my second semester for a Masters of Psychology. 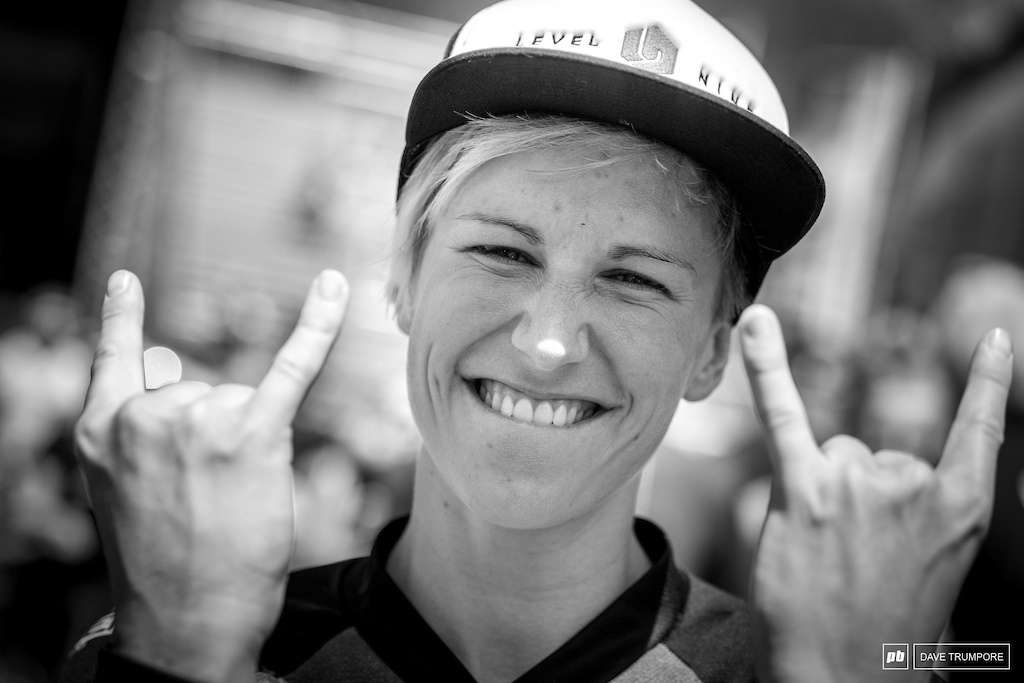 Probably being determined and ambitious. I train hard for my goals and give 101%.

Luckily, I’ve been spared from really hard crashes so far. I've just had one in 2017 when I dislocated my elbow. It was actually a stupid crash at the end of a fun ride but the recovery went well and I was back racing after 7 weeks. 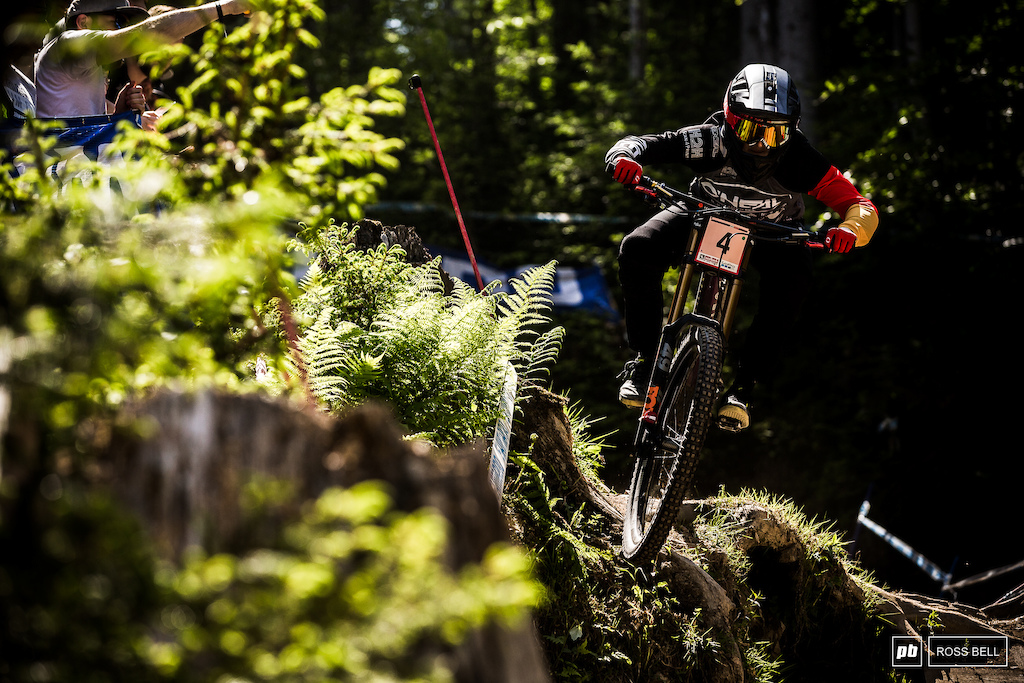 When did you decide to start racing downhill World Cups?

As I started racing downhill, it was always my goal to take part at a World Cup race. As my results got better and better, I decided to take part in my first World Cup in 2017, then the thing with the dislocated elbow happened. But this was probably a good decision as I had one more winter to prepare for my first one in Losinj last year.

How did it feel getting your first two podiums back to back this year?

This is hard to describe. So many intense feelings. There was extreme joy and happiness and at the same moment, it felt totally unreal and strange, in a positive way! I still get goosebumps on my whole body when thinking back, especially to Leogang.

You know, before the season started, my goal was it to get on the podium (4 or 5) at least once. After Maribor, I knew it will be only a matter of time before it worked out. But that this could happen right at the next World Cup in Fort William, on a track I had never ridden before and which is physically demanding as hell, and then with a third place – no way! And Leogang, what the f***? I improved the result and was only 2.4 off the win. That’s more than I ever dreamed of this season! But of course, these results are only possible, because two of the very fastest riders are out of the game at moment. I have this in mind, so I'm staying calm and keeping training. 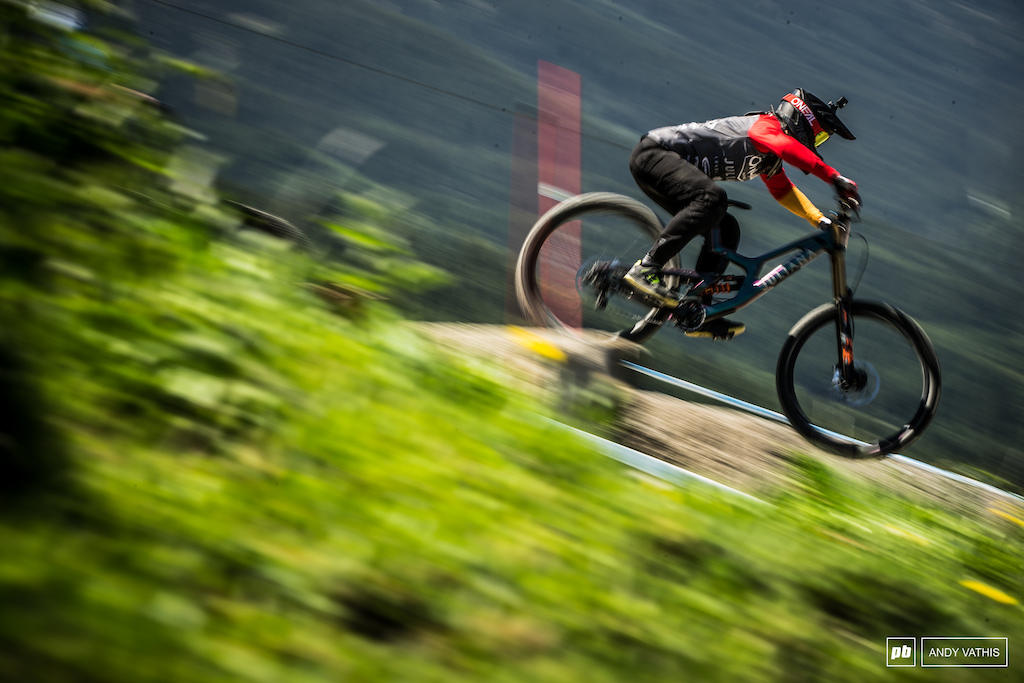 What are the struggles of being a privateer that people might not realise?

Maybe the whole organisation around the World Cups? You have to book accommodations, flights, rent a car and plan your whole travel in advance. That takes a lot of time and energy – for example when your credit card didn’t work (for whatever reason) and therefore your accommodation for Andorra gets cancelled right on the evening you have your first podium in Fort William! I was sat down at my laptop at 11:30pm that night looking for another one, probably not the issue you want to deal with that night, especially when your ferry leaves the next day and you have to get up at 6am.

We’ve seen you hanging out with Santa Cruz Syndicate a lot, is there any connection there? Is there any truth in the speculation you may be riding for them next year?

The Santa Cruz Syndicate is currently helping me at the World Cup races. So whenever I have problems or question or need help, I can come by and they will do their best. That’s very helpful for me and gives me a lot of support. What’s the plan for next year? I really don’t know that yet. 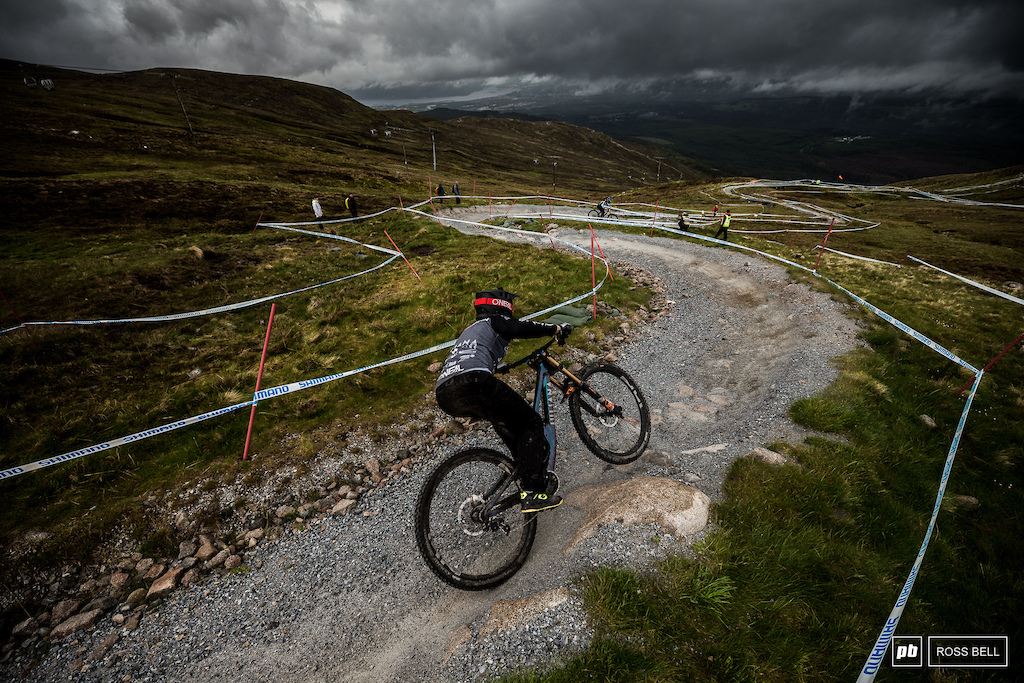 I don’t have a favourite one. There are plenty, actually the whole Alps and also some local spots in my home area. I love technical tracks and since this season I also discovered my love to jump (which was actually always a weakness!)

I don’t have one, sorry! Everything concerning sports, but also some psychological issues or political stuff.

Riding and racing my bicycle. But actually any kind of sport and being outside in nature. And eating chocolate and ice cream, even if that’s not healthy. 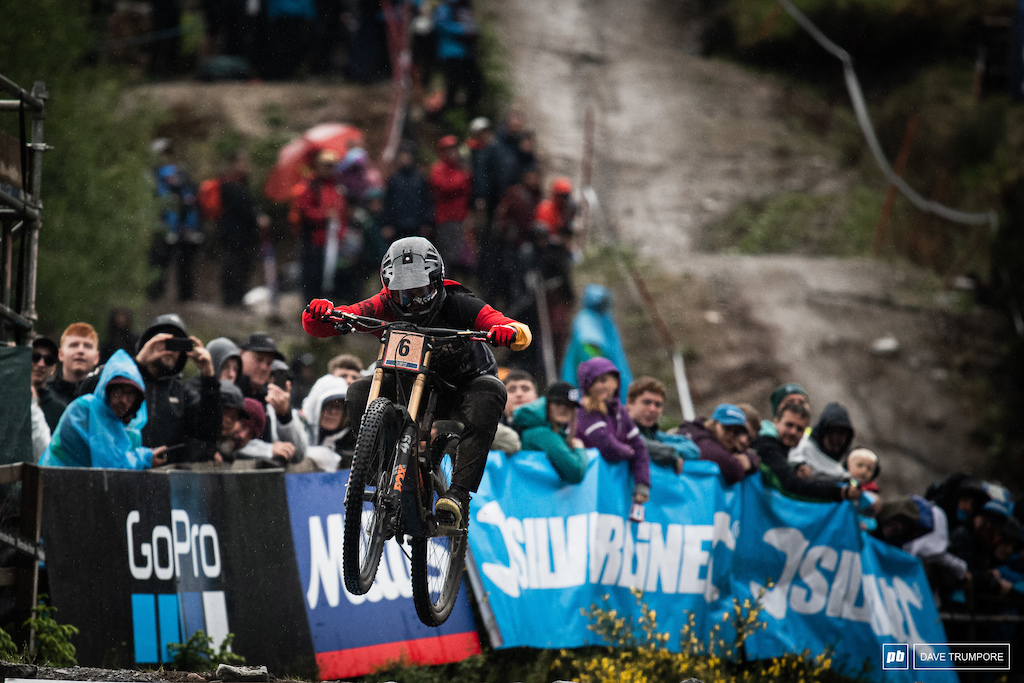 As a girl, who’s riding and racing her bike and that she’s just as simple a person as everyone else out there. And if you work hard for your dreams it pays off. Always stay tuned and do what you love!

What does the future hold for Nina Hoffmann?

Hopefully more World Cup races, a life as a pro downhiller for a few years and just enjoying life. ‘Cause you only live once! 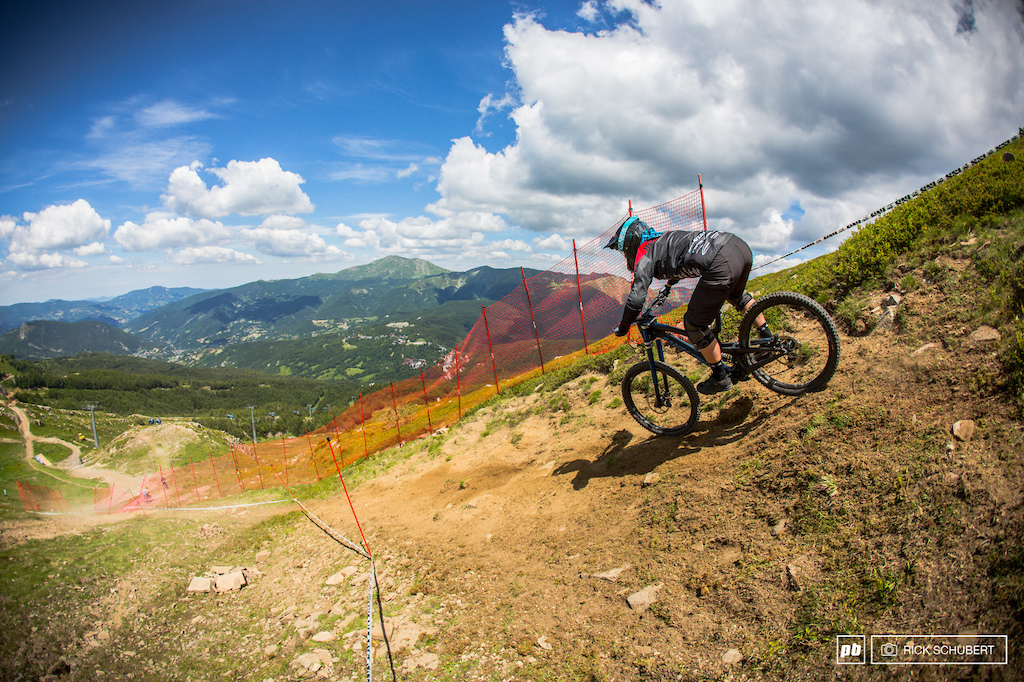 Posted In:
Interviews Racing and Events Getting To Know Nina Hoffmann

SupraKZ (Jun 20, 2019 at 4:22)
Probably will be the case. There were pics of her drinking champagne with some lady from the Syndicate and Greg in the Syndicate tents.

sourmix (Jun 20, 2019 at 5:28)
Wyn starts a privateer fund, the winners get some very much needed cash, Pinkbike gets to write a cool article and get some clicks, we get to find out more about some very cool people who ride bikes fast, the privateers get a nice profile boost. Win win win win Wyn!

jacobyw (Jun 20, 2019 at 5:23)
"But of course, these results are only possible, because two of the very fastest riders are out of the game at moment." Admirable humility and perspective, and a sentence without an "I" in it, rare for a top athlete.

betsie (Jun 20, 2019 at 4:53)
A complete breath of fresh air into the sport as a whole. In interviews she is raw and real and not giving the answer that has been trained over the years coming up through the ranks which is so good to see. Best of luck for the future and keep it real.

adrock-whistler (Jun 20, 2019 at 8:55)
Does this mean we're getting an interview with the Denim Shredder next?!? Give the PB audience what they want.

Fliberico (Jun 20, 2019 at 4:09)
Such a talented rider, i really wish her all the best in this season. Hope to see her on the podium where she belongs

JiminOz (Jun 20, 2019 at 5:20)
Good on Pinkbike for doing a spread on Wyn's winners, giving them more exposure. This is really gaining momentum!

Nanojump (Jun 20, 2019 at 5:25)
... and props to Wyn for circling back at Leogang to give Nina a full share of the substantial fundraising that came in after the initial launch!

dfiler (Jun 20, 2019 at 5:03)
When she sent the finish line jump I lost my shit. Damn! I went to google to check out her racing career. Looking forward to seeing her at future races.

JakinM (Jun 20, 2019 at 11:52)
what I don't get is why YT Mob doesn't add Vali Holl. She's obviously pretty stupid fast and they're looking for young talent, plus she's already sponsored by YT.

daweil (Jun 20, 2019 at 12:00)
@JakinM: I think I remember reading an interview a few years ago with (a yt manager?) on mtb-news, basically she was 14 at the time and yt + her parents did not want to put all the "professional pressure" on her at that age so she could have more freedom of choices

steezysam (Jun 20, 2019 at 4:48)
Great interview. Seems like she's level-headed and realistic, plus damn fun to watch on a bike

Bikez1 (Jun 20, 2019 at 6:40)
Another great sports ambassador! Someone has to give her a contract .. no harm to anyone but there are female / male athletes with full sponsorship and you ask yourself HOW DID HE / SHE do that ? It's sometimes who you know ..and not your results and effort !! Or if your face fits for marketing purposes

Good luck and get that girl some decent support ffs

syammim (Jun 20, 2019 at 8:14)
Somebody racing at the sharp end of world cup dh shouldn’t have to worry about accommodation ever

Linkpin (Jun 20, 2019 at 14:31)
True. Unless you’re Eddy Masters, in which case you might end up accidentally sleeping in a random French person’s farmhouse (without their knowledge), or maybe even the odd last-minute Scottish castle.

Trickstuff (Jun 20, 2019 at 13:03)
So cool to see Nina kill it like this. Our whole company is stuck in Front of the Livestream of every Worldcup. See you in Lenzerheide Nina.

kjjohnson (Jun 20, 2019 at 6:57)
It always blows my mind when someone is able to go from beginner to the highest level of a sport in such short order; leaves me with no doubt we'll see a lot more from her.

getsomesy (Jun 20, 2019 at 12:03) (Below Threshold)
I think it’s mostly because the competitive field of woman is so thin. Not neccisarily because they are skilled, though there are exeptionally skilled and talented woman riders.

Muckal (Jun 21, 2019 at 8:37)
Almost pissed myself when Warner called her 'the Hoff'. Sometimes there's some glimpses of the Warner of old, too bad these times hit the deck harder than an old lady on a cruise ship. Most host's commentary is uglier than a bucket of mashed a-holes

bombdabass (Jun 20, 2019 at 4:41)
Its a great story borne out of hard work and application to a goal. I wish her all the very best and hope she gets sponsored