Video: Here's How to Make Your Own Carbon DH Bike


Talkers outnumber doers by a thousand-to-one, but Vladimir Yordanov is definitely one of those rare people. It's probably fair to say that the idea of manufacturing a homemade carbon fiber mountain bike frame from scratch is intimidating to most of us. I mean, I can barely make dinner, and macaroni with hotdog slices doesn't even have a headtube that needs to stay attached.

Judging by his carbon downhill bike that we first showed you back in 2018, Yordanov can probably cook up some impressive pasta. 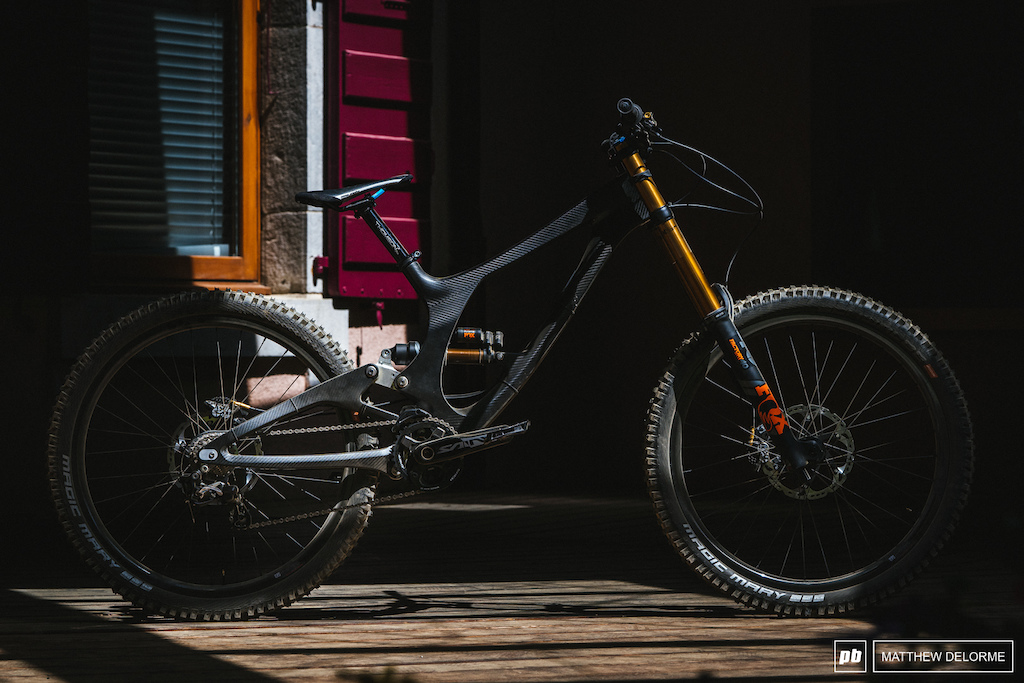 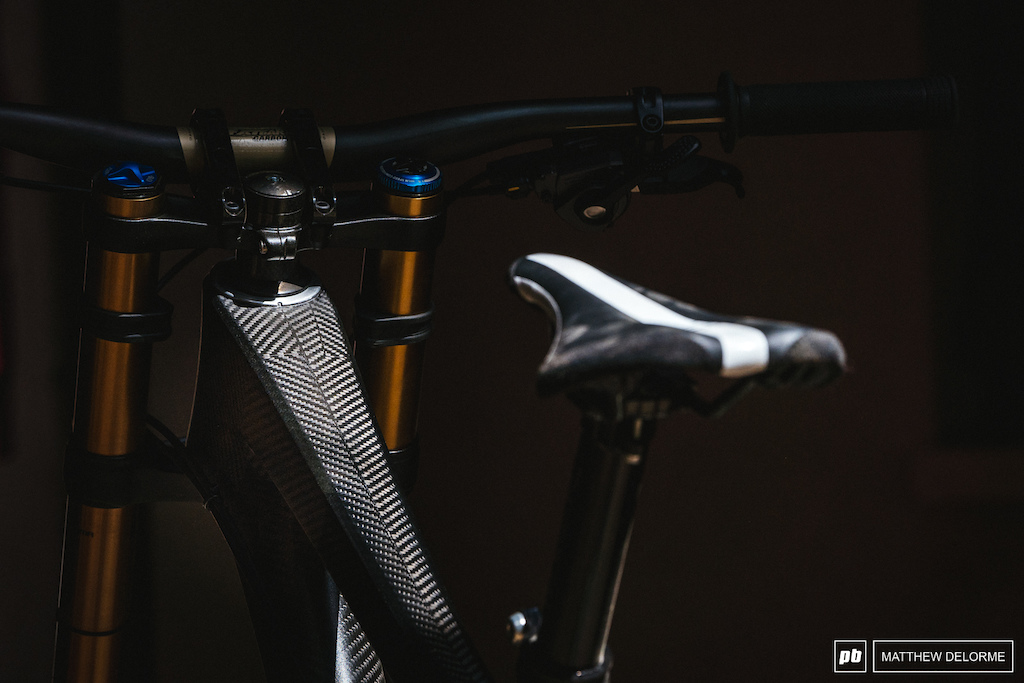 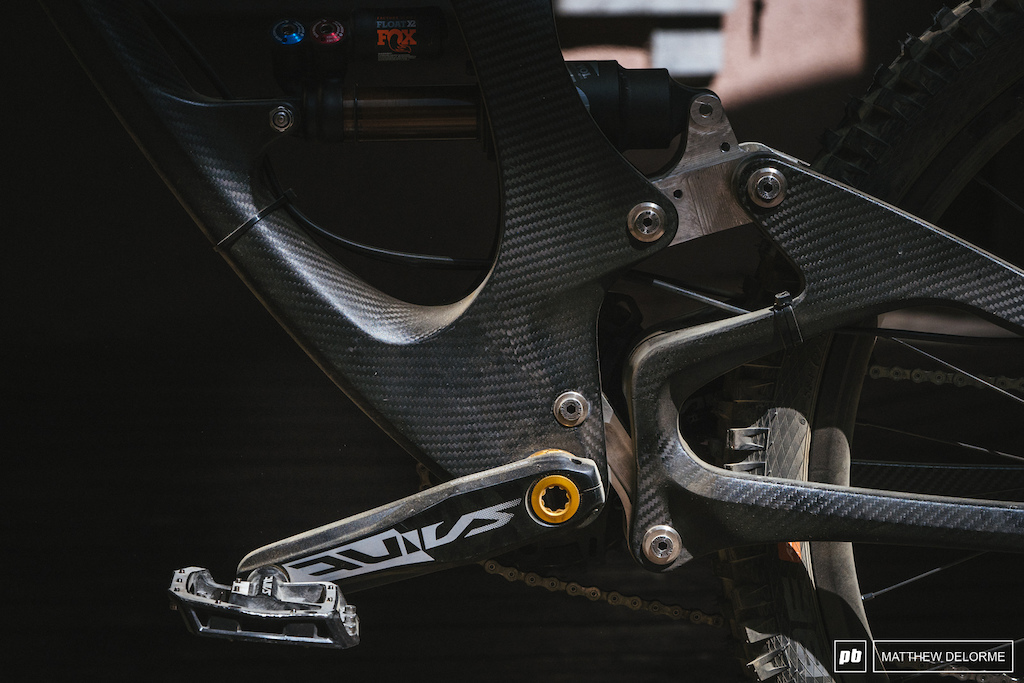 The Sequence is a 200mm-travel, carbon fiber downhill bike that Vladimir Yordanov designed and built.

The 200mm-travel Sequence uses carbon for both its front and rear triangles, and Yordanov worked with UK's Easy Composites to manufacture the frame from start to finish. The entire process, from the early CAD design to rideable prototype, is covered in the nearly 40-minute long video above. It's an interesting operation that differs from a high-volume approach a production model would require, but I still doubt my own success, even if I attempted a "simple" hardtail frame.

I need to work on my hotdog 'roni, but what about you: Any interest in making your own carbon fiber mountain bike?

Seemingly, you don't have to do anything nearly so involved to keep people interested. I'd just come up with 4 dozen extremely frustrating ways to "tease" the ride video without actually doing anything, and then release a short video where it breaks and you turn it into a coffee table, call it good.

Go for it Levy, you still have the PB Credit Card with you, don't you?

You can call it a GrimBit.

MrZ32 (Feb 13, 2020 at 13:21)
@mikelevy: just make sure you use lots of kevlar, you'll never need to worry about panel replacement again, incredibly difficult to ruin.

this car used all kevlar panels when it wasnt illegal in that race series.. those panels held up fine
www.youtube.com/watch?v=423qAJG133Q

The-Foiling-Optimist (Feb 3, 2020 at 0:40)
This is a tremendous video, and whether or not the geometry of this bike literally from the future, or perfectly wackadoodle, is not relevant. This is the first YouTube video that really shows in detail how to manage the laps between mould halves AND how interior vacuum bags work. As mentioned in the YouTube comments, Konigsegg the car company made a video along these lines but didn't really show the overlap and internal bagging, other videos have been even vaguer, or are for structures like an air intake plenum where the interior cavity is much larger so is just formed with the external vacuum bag. Videos on this topic have hitherto been really cagey about that whole area as though it's a big trade secret. Another example: the little detail about putting the release film inside so as to make it easier to get the bags out is super important. Anyway, props to Easy Composites for putting this out and the anglo guy did a great job reiterating Yordanov's words that were occasionally hard to follow.

WAKIdesigns (Feb 3, 2020 at 3:56)
His previous bike had 440 reach, what is it on this one? Can’t be popular when current geometry echo chamber is filled with people taller than 6’. God forbid he made chainstays shorter than 450...

millsr4 (Feb 3, 2020 at 5:44)
I agree, this was a terrific overview of the layup process. This should really highlight to people why cheap carbon is sketchy, there is so much attention to detail needed. Being someone who works in the composites industry it can be difficult to describe things to people who aren't familiar with the process and they did a great job of this. That said, I still felt like you need some precursory knowledge before watching this video or it won't make quite as much sense. I'll definitely be pointing some of my friends towards this one!

vyworks (Feb 3, 2020 at 5:46)
@WAKIdesigns: The bike still has 440 reach.. I still haven’t found the special mould release that makes the moulds grow. But I haven’t grown either so it works out I guess

Konyp (Feb 3, 2020 at 7:05)
@WAKIdesigns: I don't quite get the problem. Short bikes exist in abundance and are not going anywhere but tall people have only recently been able to buy MTBs that fit them. Does this offend you somehow?

WAKIdesigns (Feb 3, 2020 at 7:13)
@Konyp: no... I just find it funny how silly situation from 2015 where there were no bikes for long people start to change into situation when modern bikes fitting me come as Small or Medium at best. show me a good bike with 450 reach or shorter that isn't a medium. We'll talk in 4 years. Right now it is manageable, we'll see how the market will look like in 2024. Will 450 be for midgets.

I would buy another bike from Antidote but unfortunately with their latest bike they bent down to stupid long and short travel. Oh well... just saved a lot of cash, what I am complaining about.

There goes your 4 years out the door since that frame design was from 2016.

Primoz (Feb 4, 2020 at 9:27)
@WAKIdesigns: this is a prime example as to why reach is so useless for bike fit. Yeah, 450 might have become size S, but the top tube lenghts stayed the same. With the seat tube angles getting steeper. SOmething had to give and it was the reach. Except when it doesn't and you get a stupidly short bike with a long reach -> Privateer 161 in 'XL' has the top tube length of a medium-long Bird AM9 with the reach that is a tad shorter than the XL AM9. And a 2 cm longer wheelbase than the XL AM9. Logic? There is none.

WAKIdesigns (Feb 4, 2020 at 9:59)
@Happypanda1337: it’s the best bicycle I have ever ridden. No point in changing absolutely anything in it. Shame it can’t be equipped with standard drivetrain due to rear spacing. Also I was speaking about the latest Carbon Jack 29.

tracer2 (Feb 2, 2020 at 17:17)
I’d probably feel better starting with carbon kitchen utensils first before I commit to making my own bicycle frame.

treborfields (Feb 3, 2020 at 2:24)
Met this guy and saw the bike in person at that The Bespoked Bike Show last year. He seemed proper decent guy happy to talk for ages about the details best of all and the bike looks stunning in the flesh, some pro levels of carbon work to get the finish so good.

JoelAllport (Feb 4, 2020 at 0:45)
Vlad is a super nice guy and really knows his stuff. Was lucky enough to race this bike a year or so ago and it's a beast. It's fuckin mint looking as well tbf!

ROOTminus1 (Feb 3, 2020 at 14:29)
How were the BB fittings installed? One moment it looked a distinctly solid bottom section of front triangle, next there's suddenly a threaded metal tube? I suspect the aperture was formed same as the headset bearing hoops, with inserts, and the final fitting bonded into place (hopefully on a jig to keep square). @vydesign am I far off the mark?

vyworks (Feb 3, 2020 at 16:24)
Not far at all man. The bb insert that you see extracted from the cured frame, moulds the bonding faces. The diameter there is 40mm. After the ‘solid bottom section’ is trimmed and degreased, an aluminium threaded insert with external diameter of 39mm is bonded. To keep it aligned I used the moulded brass ICGS tabs on the frame and one of those BB mounted chain guide adapters (with clearance holes for the 3 m6 bolts).
I hope that’s clear enough

Some down votes came your way. I think a few are feeling regret about buying a CC frame haha

wberesford (Feb 3, 2020 at 6:43)
So many opinions, followed by the easy classic negative keyboard comments!

FilipStrapinadotCZ (Feb 3, 2020 at 0:45)
So, the left and right molds are together just like that? I thought there is some cover up at the joint. How the adhesive can be strong enough?

mougetm (Feb 3, 2020 at 11:49)
it seems that the last part involve a 120°C cure, maybe ABS could resists but it seems that mechanical strengh is important during this part

dsirl (Feb 4, 2020 at 7:02)
Those pre-preg carbon sheets make these lay ups SO much easier! They just chill and talk the whole time. No racing around trying to beat your epoxy.

kz314 (Feb 2, 2020 at 21:26)
Pinkbike already has a prior article about this bike. The chain growth is fairly significant up to the sag point, but after that it drops off significantly until it's practically zero at full compression. You can kind of tell judging by the linkage as well - the center of curvature starts off very high (resulting in high chain growth and pedal kickback), but as the suspension compresses and the linkages rotate, the center of curvature migrates significantly downward until it ends up quite far below the top of the chainring.

tuhuramtb (Feb 4, 2020 at 5:06)
Really enjoyed that - would like to see a video of the design process including stress analysis etc.