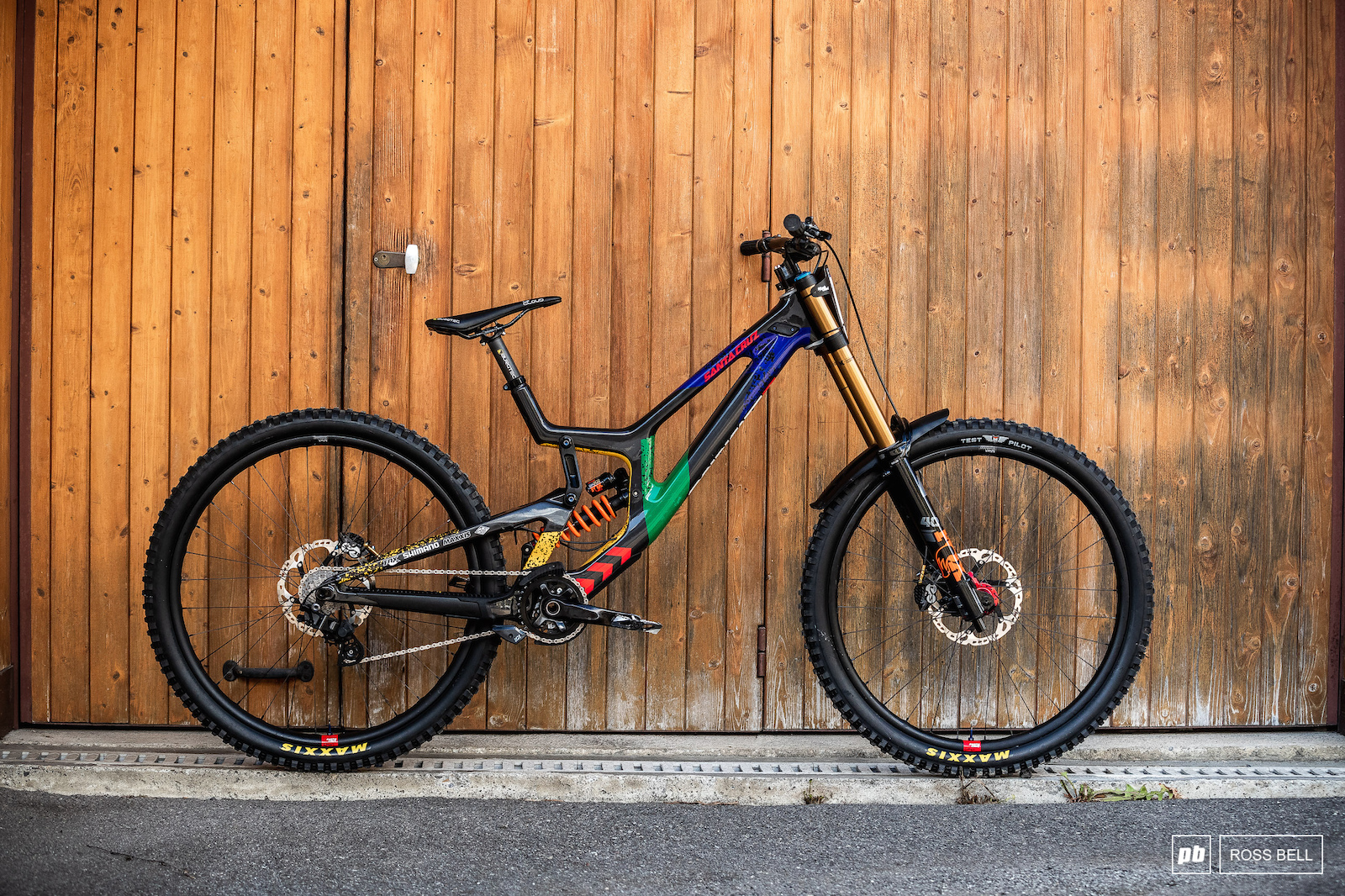 BIKE CHECK
Greg Minnaar's
Santa Cruz V10
Photography by Ross Bell
Greg Minnaar needs no introduction. The so-called GOAT has been at the sharp end of the World Cup field for two decades, evolving alongside the sport to stay at the top for all these years. 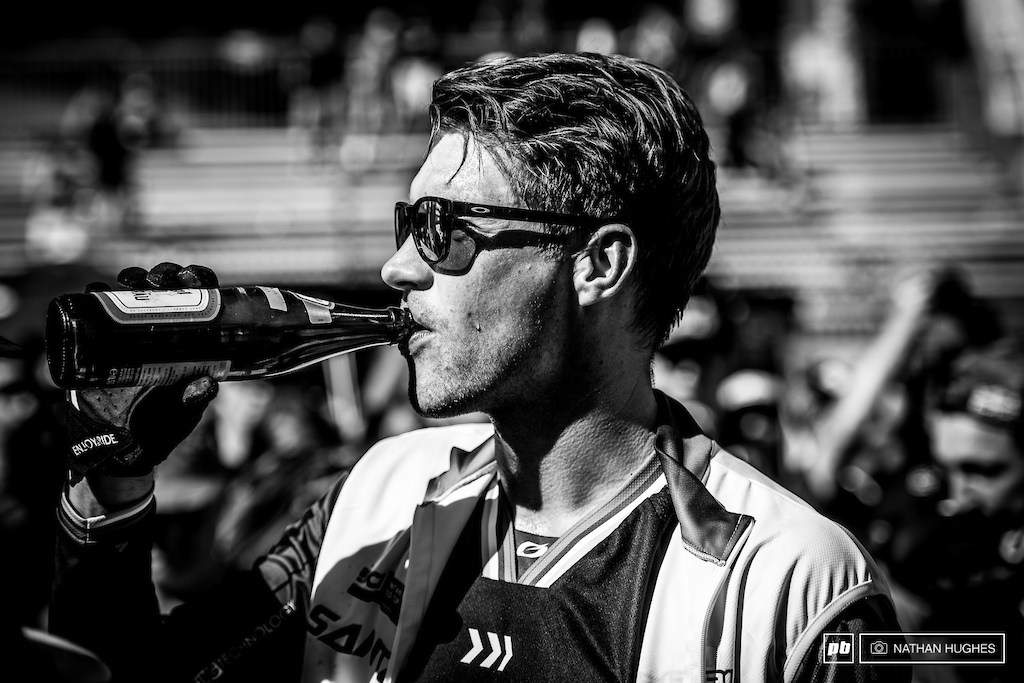 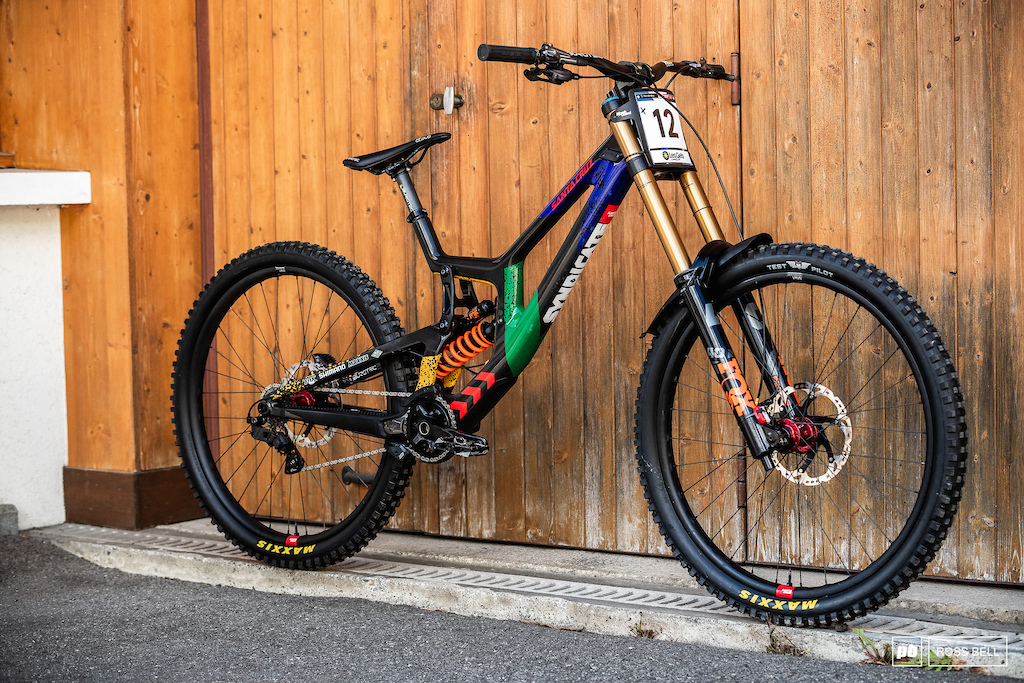 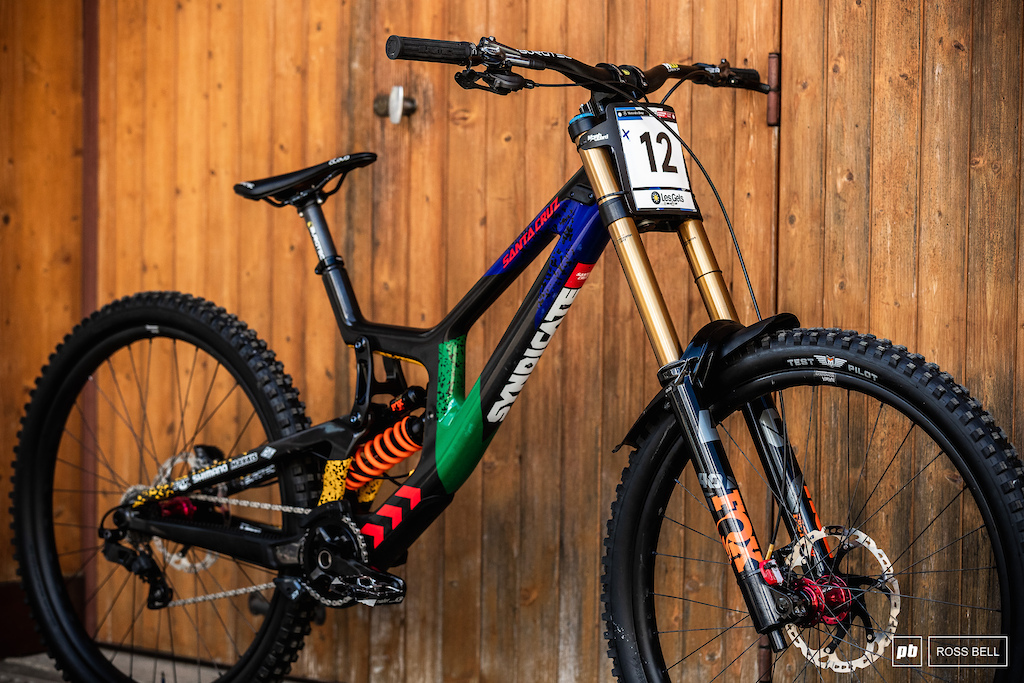 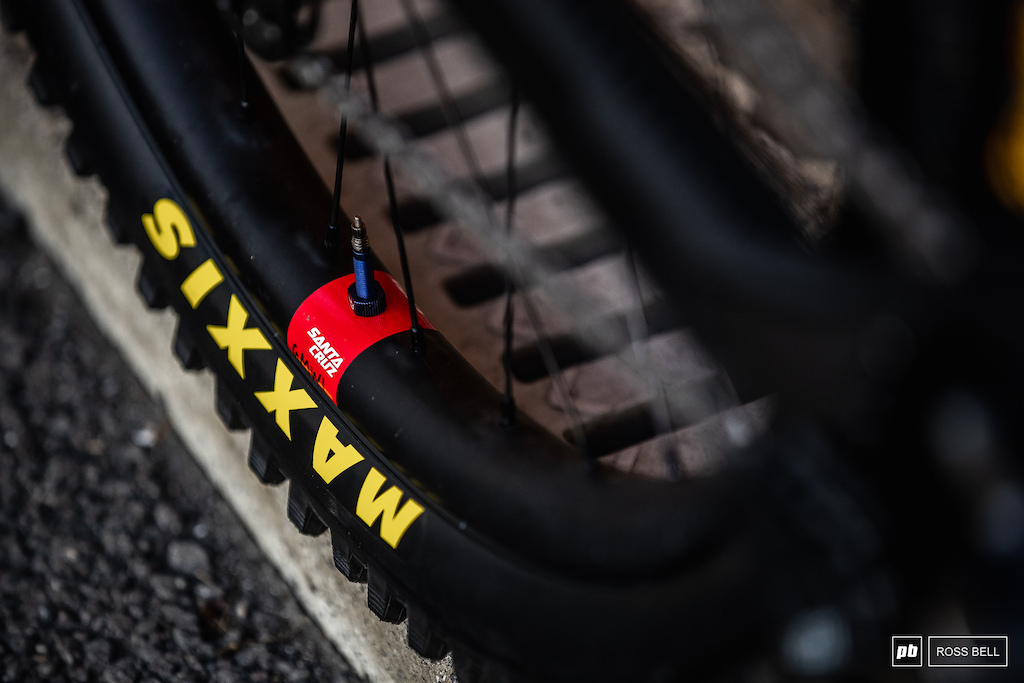 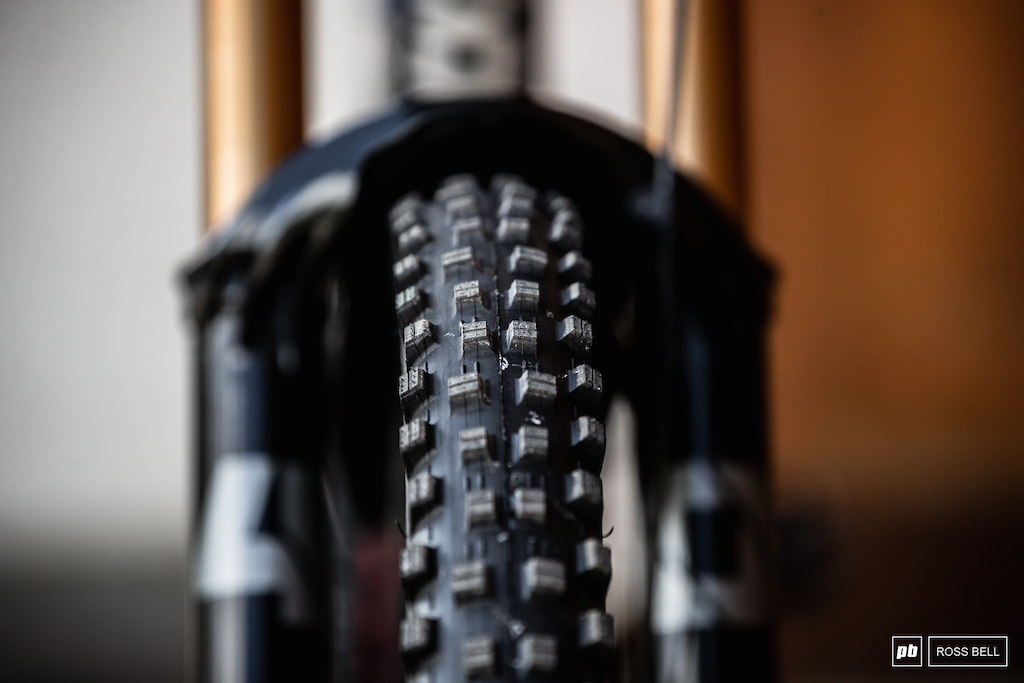 It's Shortys front and rear at the moment. While they've talked about switching to something else, so far they've stuck with the mud tires because "the forecast looks suspect for the weekend" and it's good to keep things as consistent as possible before the race. 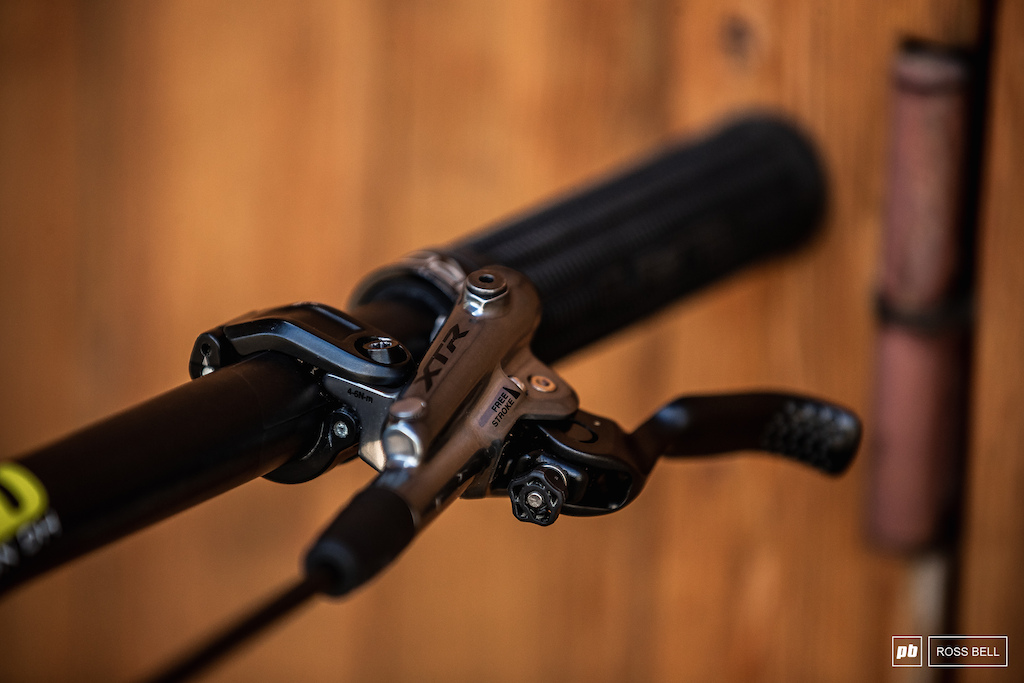 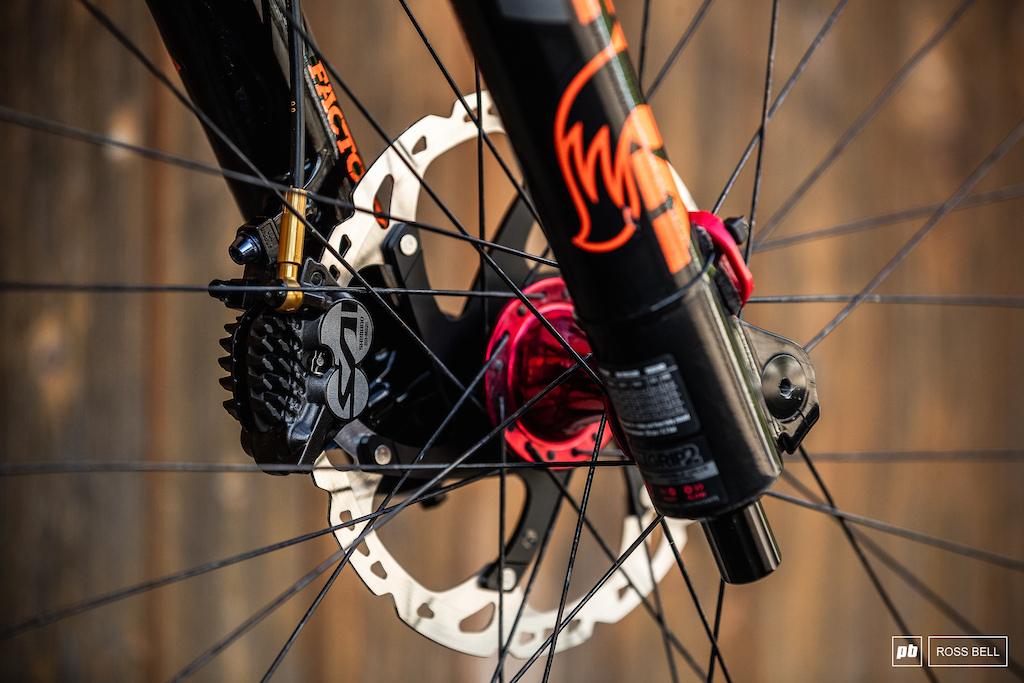 A Saint and XTR combo. Minnaar prefers the feel of the XTR levers over the Saints. 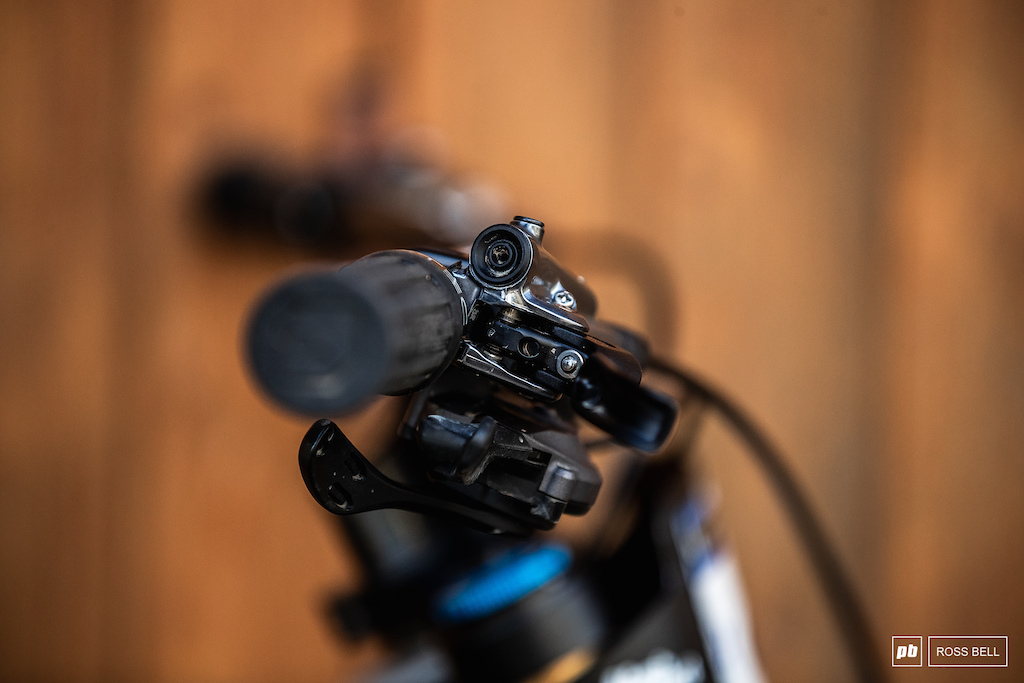 He's quite particular about his lever setup, especially when it comes to the symmetry of his grips and levers, and always runs his levers at 27 degrees down from flat. 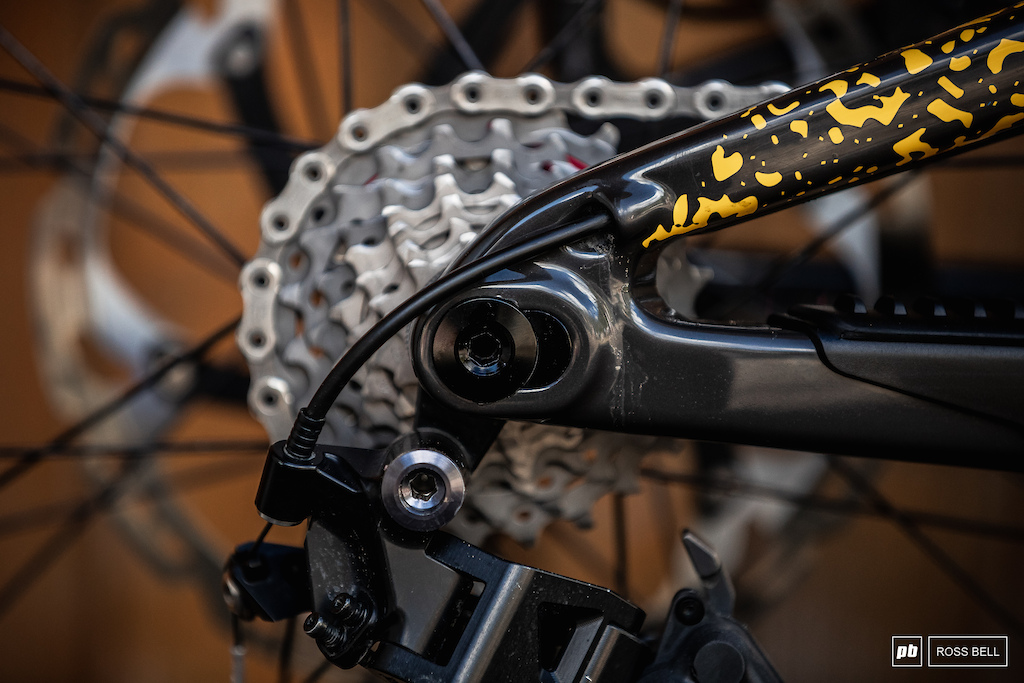 Minnaar's chainstay adjustment flip chip is in the longer position, naturally. In years past he has used custom aluminum dropouts to extend his bike, but this year he has opted for what his mechanic says is a more balanced ride. 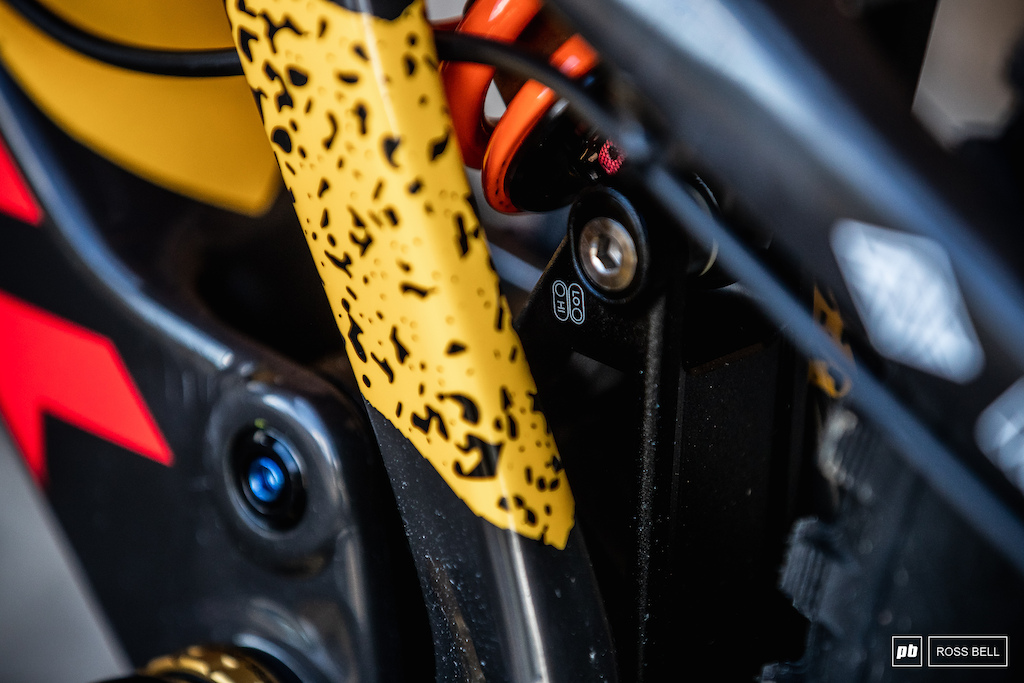 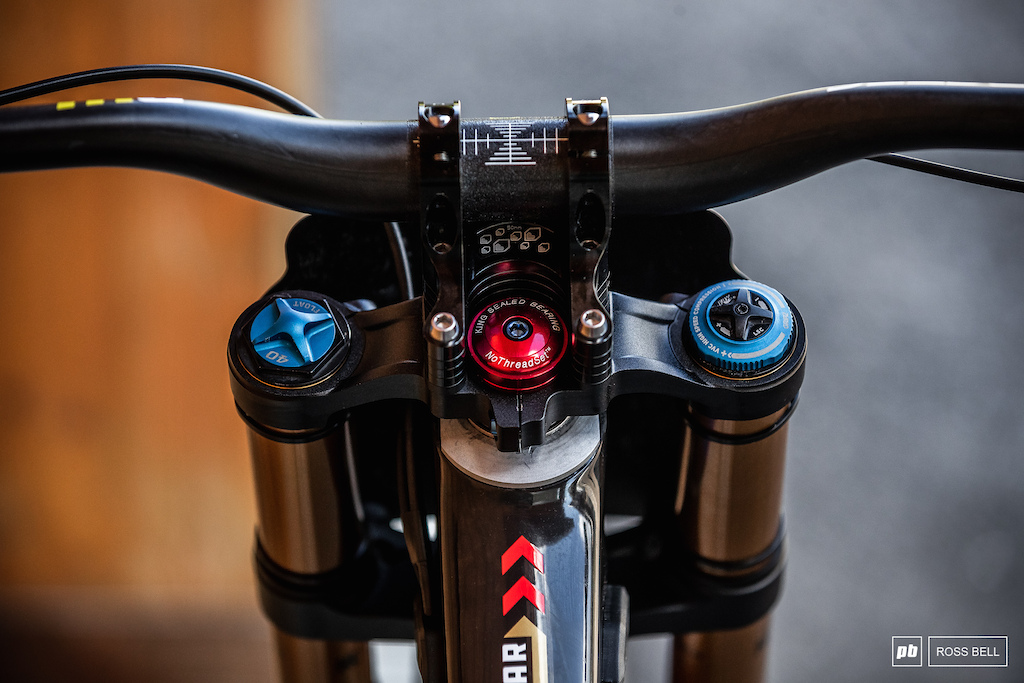 Even without custom dropouts, the bike is set up long and low. After Leogang, his mechanic said, he started using a new headset that adds 5.2mm in reach and slackens the bike by half a degree. 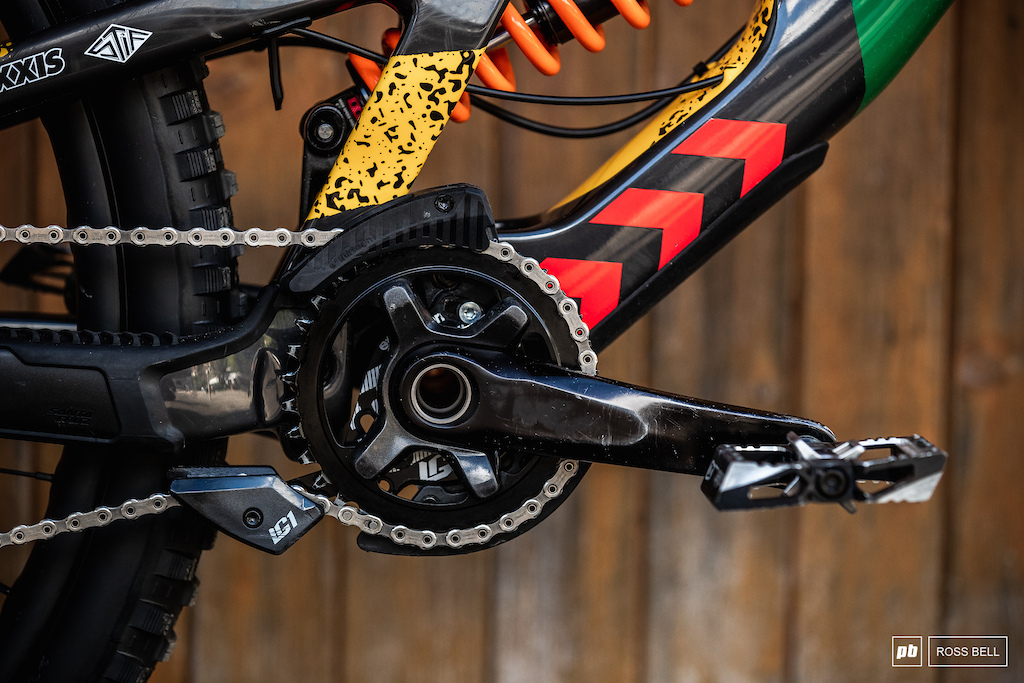 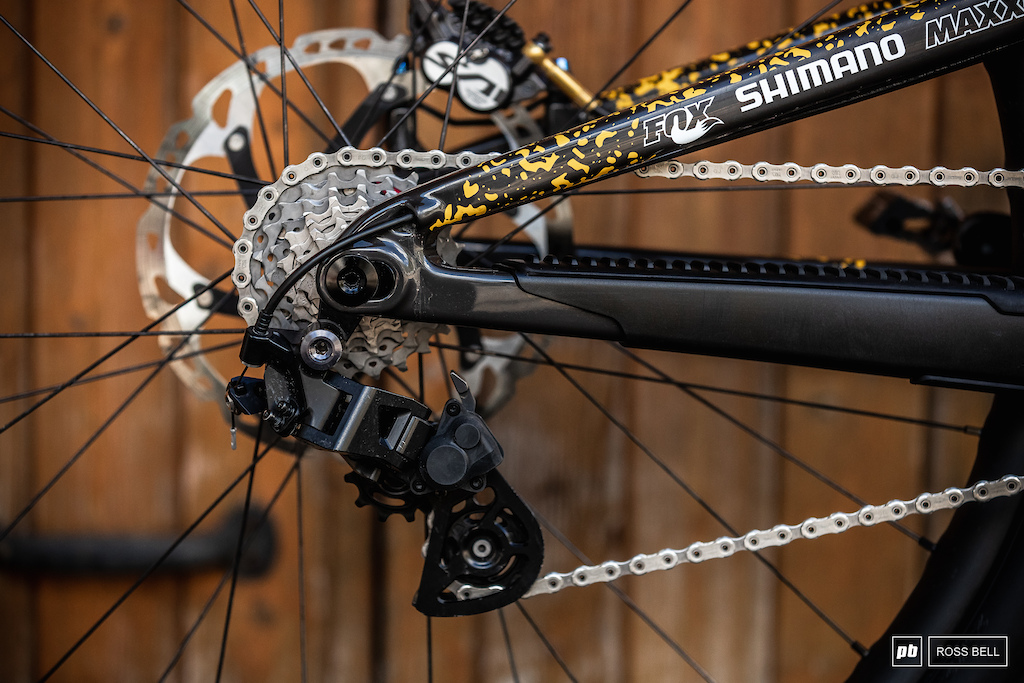 Sure looks like new Saint. "It doesn't exist," his mechanic said when asked about the drivetrain. 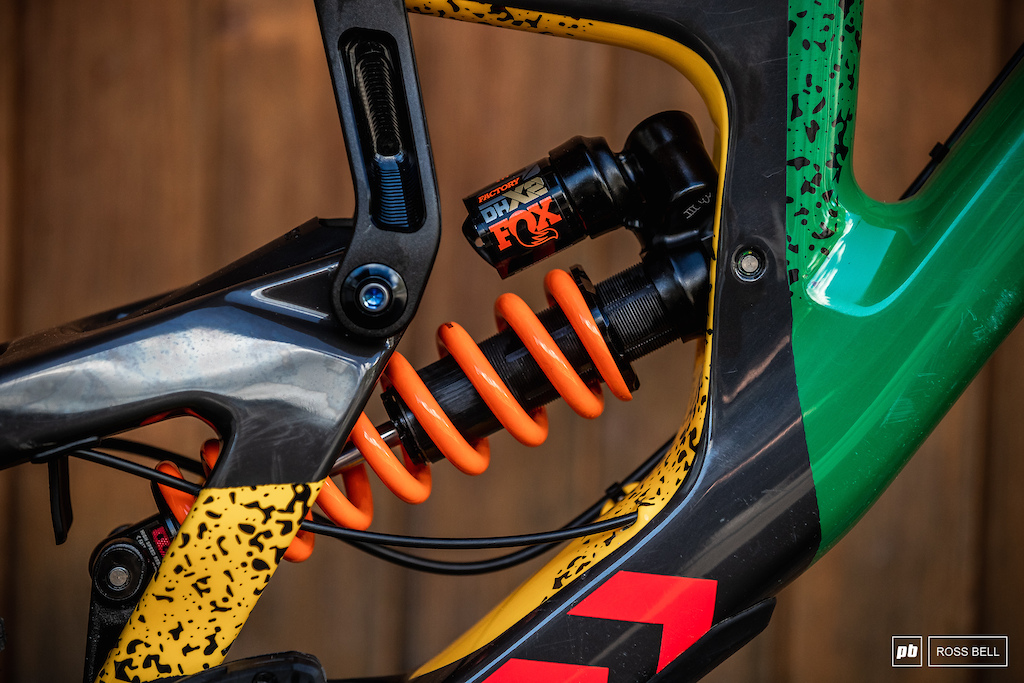 Minnaar swapped from a 550 to a 575 spring right before his race run in Leogang. 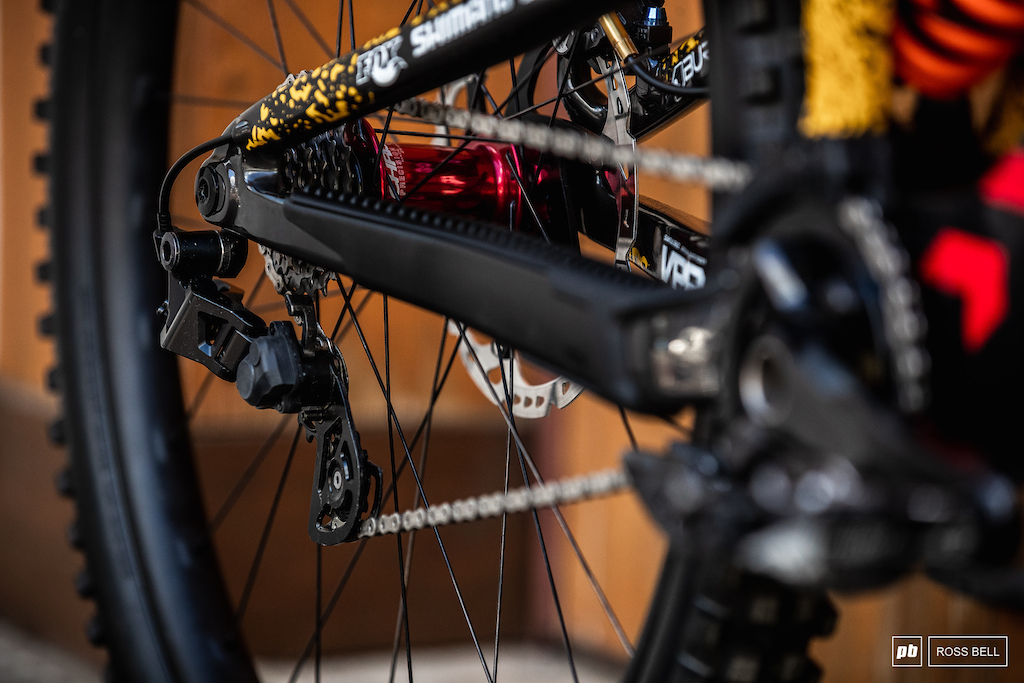 Stylish Chris King hubs (plus a bonus angle on that derailleur). 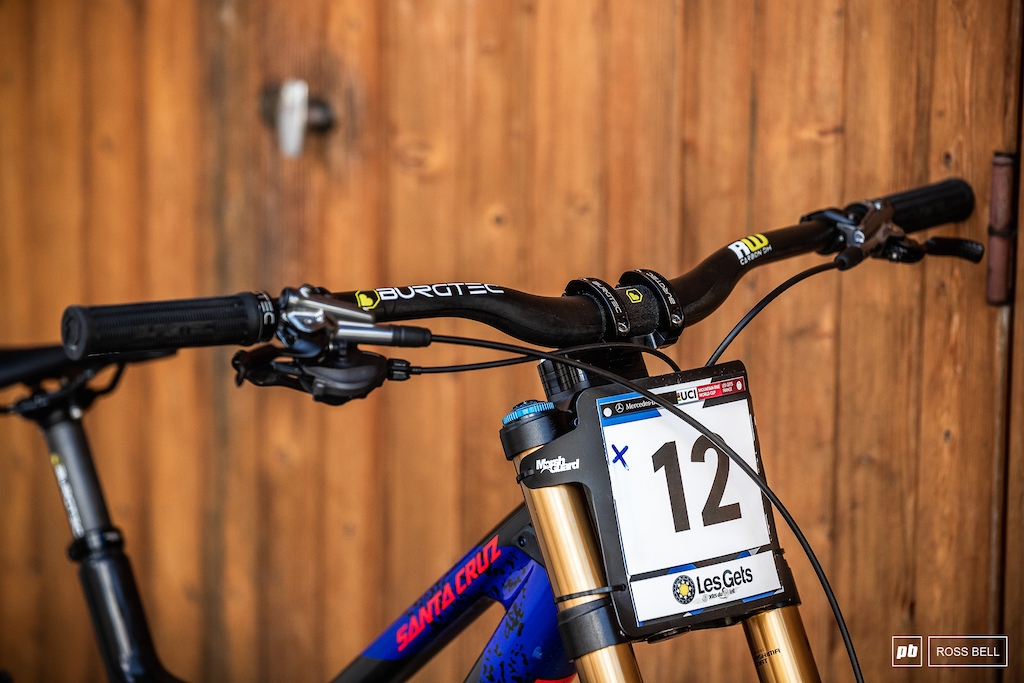 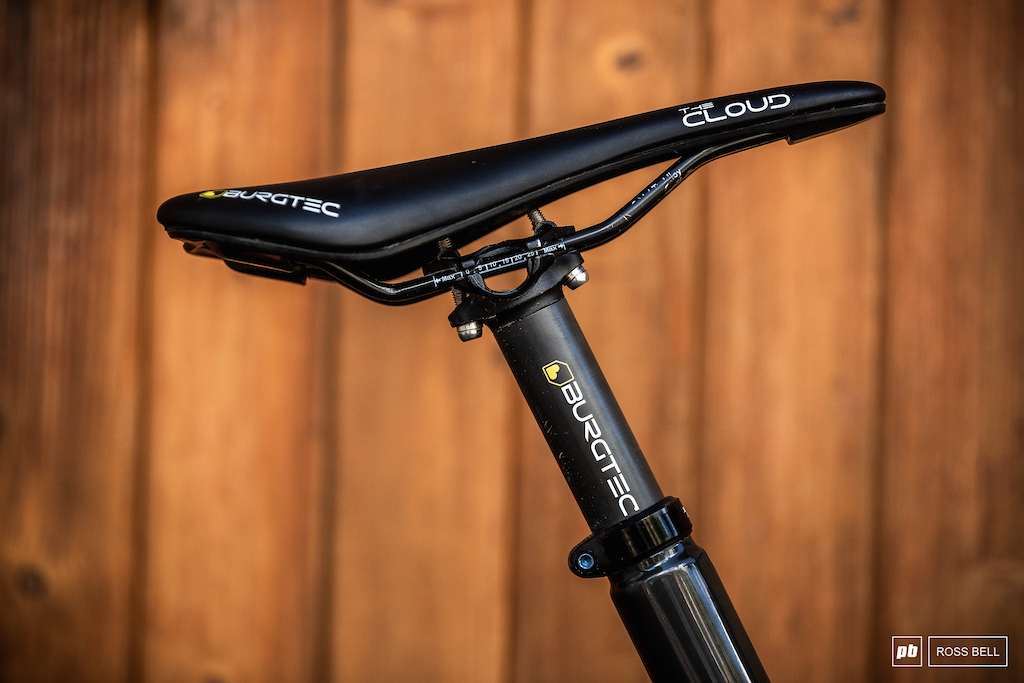 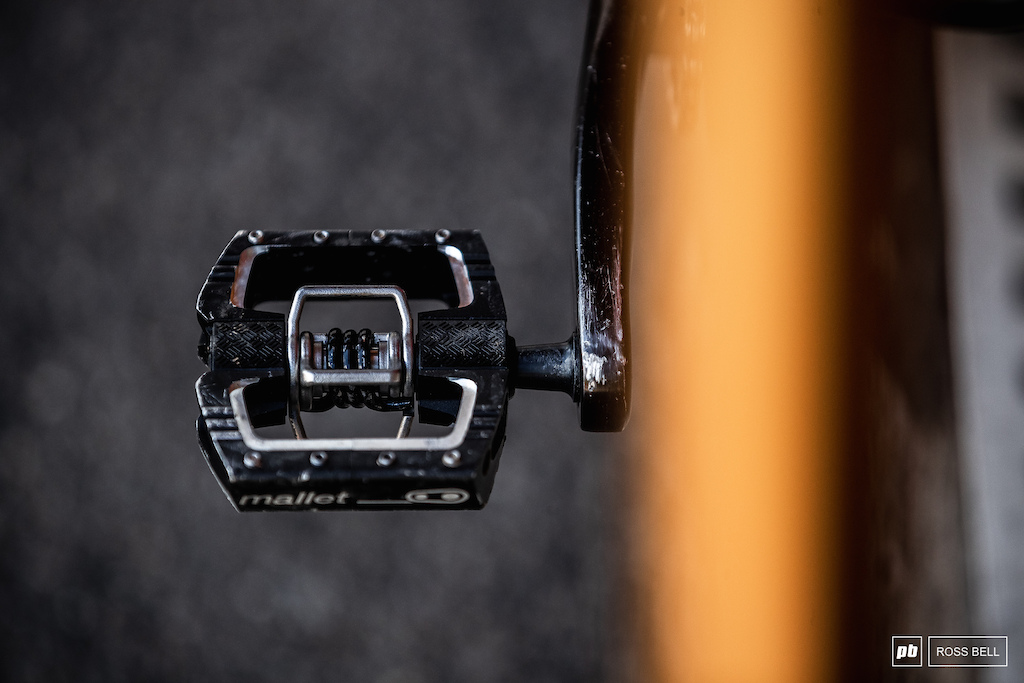 Crankbrothers Mallets finish it off.

drjonnywonderboy (Jul 2, 2021 at 16:32)
No we pronounce it 'Hope V4'. Modulation and confidence in a consistent bit point is essential.

wyorider (Jul 2, 2021 at 18:15)
@drjonnywonderboy: XTR levers without the Servo Wave cure that. And Hopes are spendy enough it's not even more expensive to do the Saint/XTR combo.

watchtower (Jul 2, 2021 at 23:51)
@drjonnywonderboy: I'd love to like Hope but every set I've ridden feel wooden and underpowered. 5 pairs and all apparently bled and set up right.

englertracing (Jul 2, 2021 at 16:53)
The raw aluminum cups. Custom made There's a few people that can do that Works Components, Chris King buzzworks, Serjio tschenett, he can custom make them I machined a reach x angle set before. It took me all day on manual machines to make the setup to hold the cups and make them.

nug12182 (Jul 2, 2021 at 16:29)
Ill stick with my trusty Saint cranks that I already have. They have never gave me a single problem. Those new ones look like crap kinda. But that derailleur looks sick!!!

ols532704 (Jul 3, 2021 at 9:12)
@jaame: Thats exactly what I thought. I kind of hope they look different in production tho. I think the current saints look pretty good and I was hoping they would do a dm chainring.

CustardCountry (Jul 4, 2021 at 1:29)
I’ve still got an original set of Saint cranks (and a set of Hones!) that are still going strong. Although they are on about their 29th BB!

jaame (Jul 4, 2021 at 2:26)
@CustardCountry: I had some of those Hone cranks with the alloy spindle on my Corsair. They were good cranks. Having said that, all Shimano cranks are really good.

DHhack (Jul 2, 2021 at 16:41)
Sick bike! Would love to see a factory rider do a bike check of a privateers bike and hook them up with a set of tires or something else they could really use.

stedaly11 (Jul 3, 2021 at 1:30)
Why do pro riders use loads spacers rather than a higher rise bar? Noticed this on a few tall pro riders bikes now.

gonecoastal (Jul 4, 2021 at 20:02)
@SintraFreeride: Pretty long for a DH bike. They tend to have short Reach. Looks to be changing slowly though.

SintraFreeride (Jul 4, 2021 at 22:56)
@gonecoastal: It's small for him. You can see it when he rides. It makes no sense to me why current trail bikes are longer in reach and wheelbase than most modern DH bikes!

I saw an old video of Greg riding 26" DH bike and oh god it looked like a circus bear riding a tricycle.

Be curious to see what the WB and FC on the next gen of Commencal DH bikes is. This current mullet edition is looking to get proper numbers.

SintraFreeride (Jul 10, 2021 at 22:26)
@gonecoastal: I think Commencal and other brands will eventually offer +520mm reach DH bikes but it's going to take a while. In the mean time you can always get a Nicolai G1 and put on a longer shock to get +200mm of travel like Paul Aston (nsmb.com/articles/paul-astons-210mm-do-everything-nicolai-g1).

TARTARA (Jul 2, 2021 at 15:59)
www.pinkbike.com/news/nukeproof-shows-off-nigel-pages-custom-giga-290-ews-race-bike.html
Below threshold threads are hidden

stiingya (Jul 2, 2021 at 16:47)
Admittedly it does look like a cheap off brand Chinese derailleur off of Ebay/Amazon, etc. And I'm sure he's tapped for testing "budget friendly" parts now and then on his trail bike or in the off season, etc

But hard to believe he OR his sponsors would deliberately risk World Cup races on budget parts unless they offered some advantage? Also why would they work on Zee/SLXDH? before updating Saint when it's pretty clearly over due...?