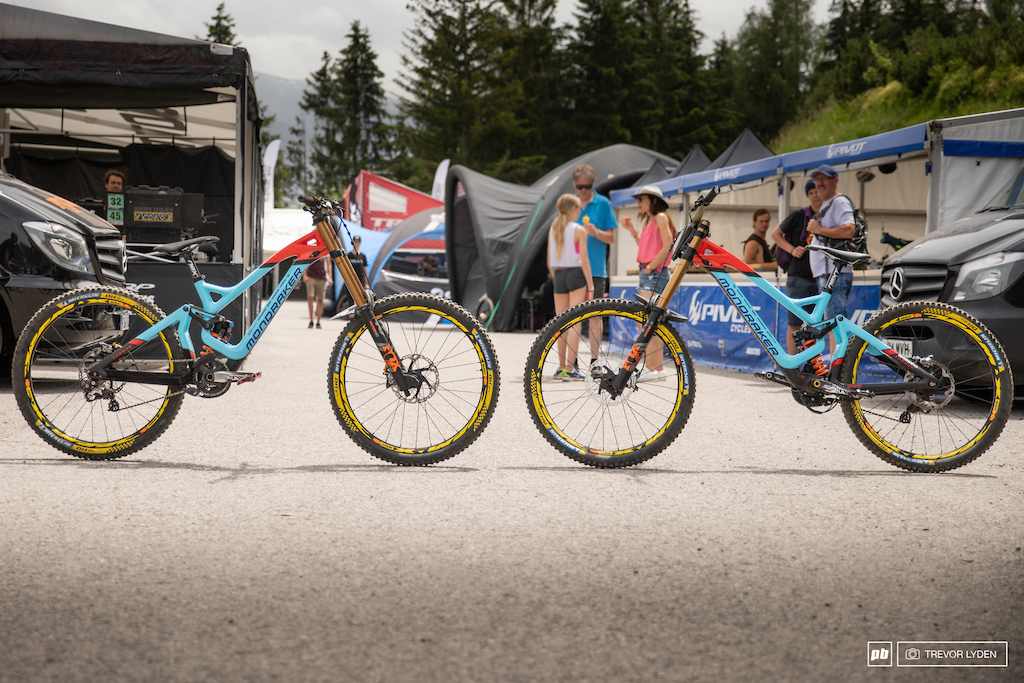 Laurie Greenland's (left) and Brook MacDonald's (right) Mondraker Summums. Photos: Trevor Lyden.
After two brutal race weeks in Fort William and Leogang, most teams took the opportunity to rest up and skip Crankworx. Not MS Mondraker, though. They've brought their full pit setup and a stacked roster of riders all ready to race. We grabbed the bike of their smallest team member, Laurie Greenland, and their largest, Brook MacDonald, to compare their rides and see what differences we could find.

About the riders
Brook MacDonald 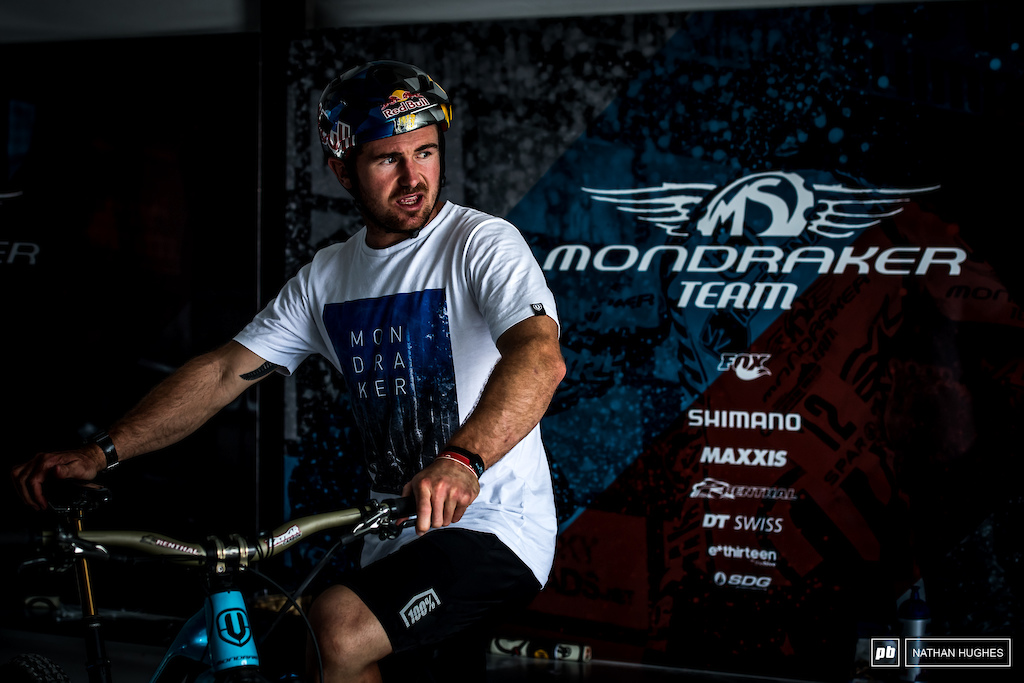 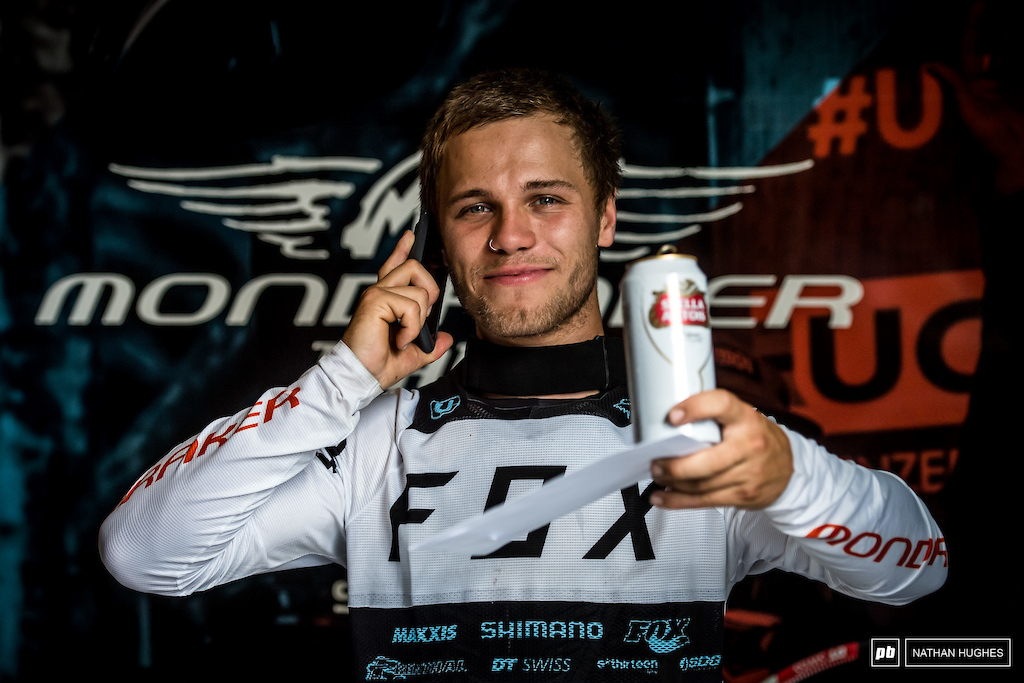 Both riders are on Mondraker Summums with Brook one frame size up from Laurie. The frames for both riders have been lined with plastic tubes and filled with foam to keep them silent up on track. Brook's mechanic Ben doesn't recommend emulating this is trick, though. He tried it on his own bike first and made a bit of a mess of it before he got the hang of the technique for the team bikes. 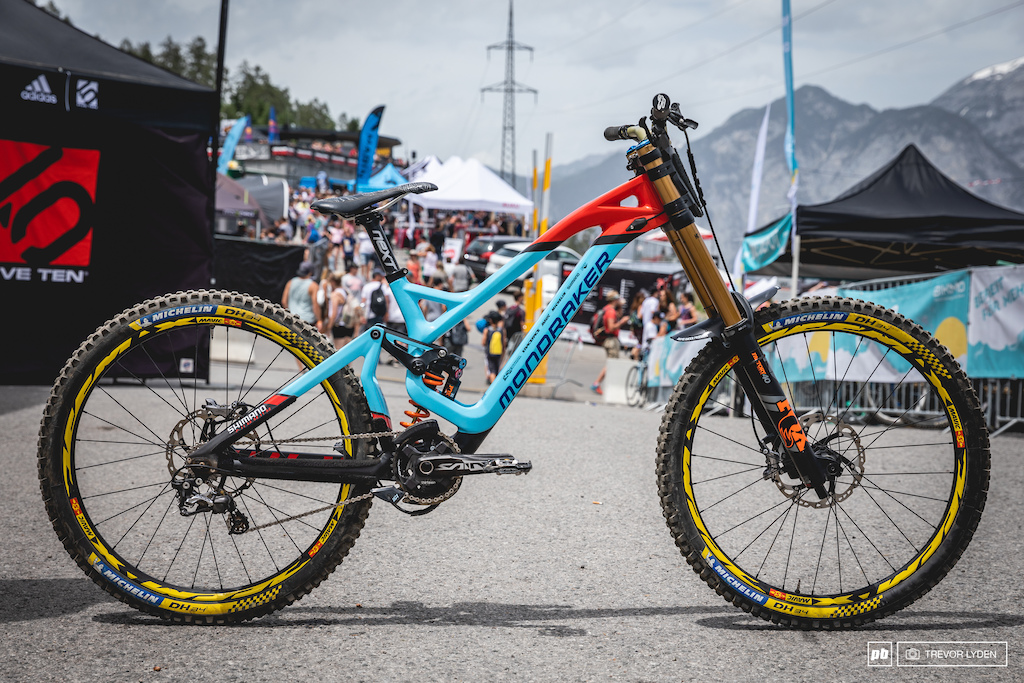 Frame size Large
Headset Cup Brook has a headset cup custom made by Ben, his mechanic, that adds 6mm to his front end. Ben wanted a headset cup that didn't add any rise and kept the head angle consistent , so he machined this one.
Chainstay length 450mm - middle setting 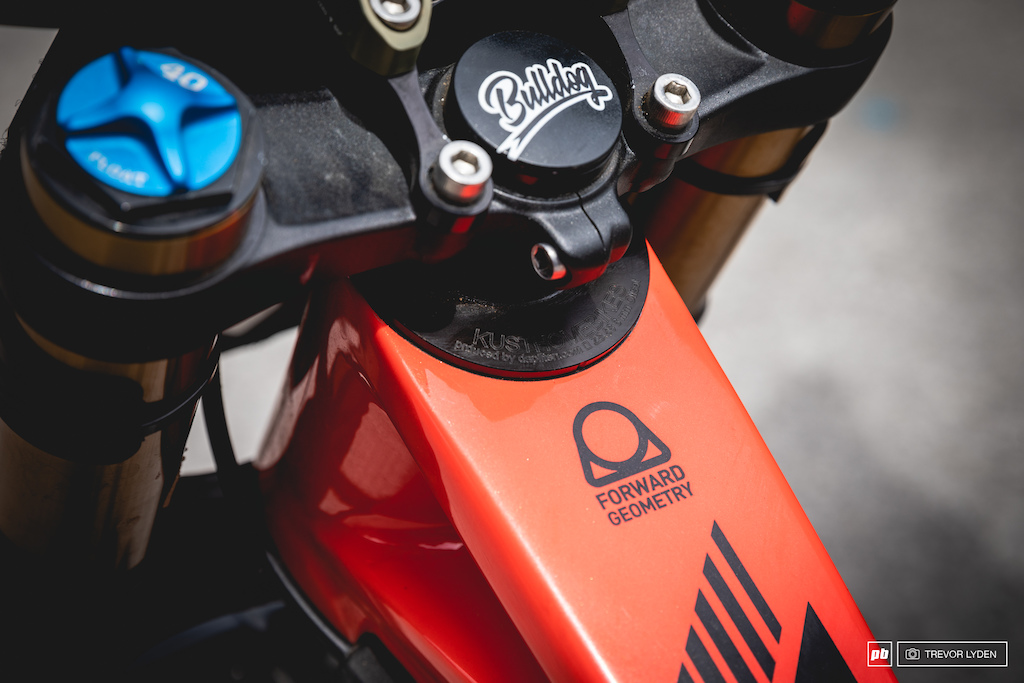 A custom made +6mm cup for Brook.
Laurie Greenland 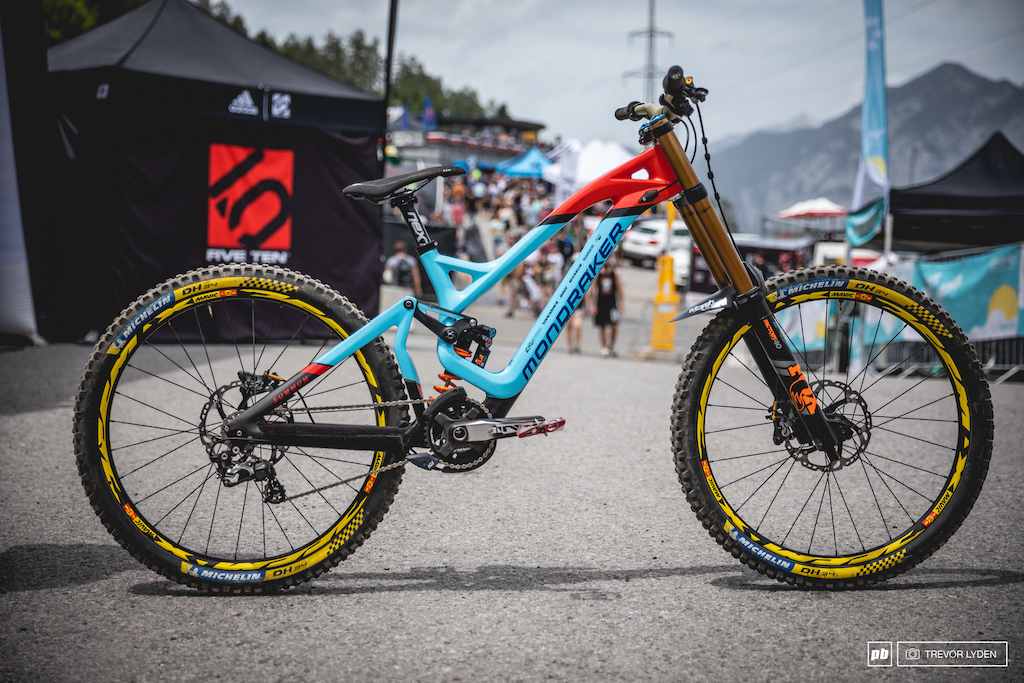 Frame size Medium
Headset Cup Laurie also has a headset cup fitted and his adds 7mm. His isn't custom (like Brook's) but his mechanic has cut it down a bit so it doesn't add stack height, allowing Laurie to keep a low position on the bike.
Chainstay length 450mm - middle setting 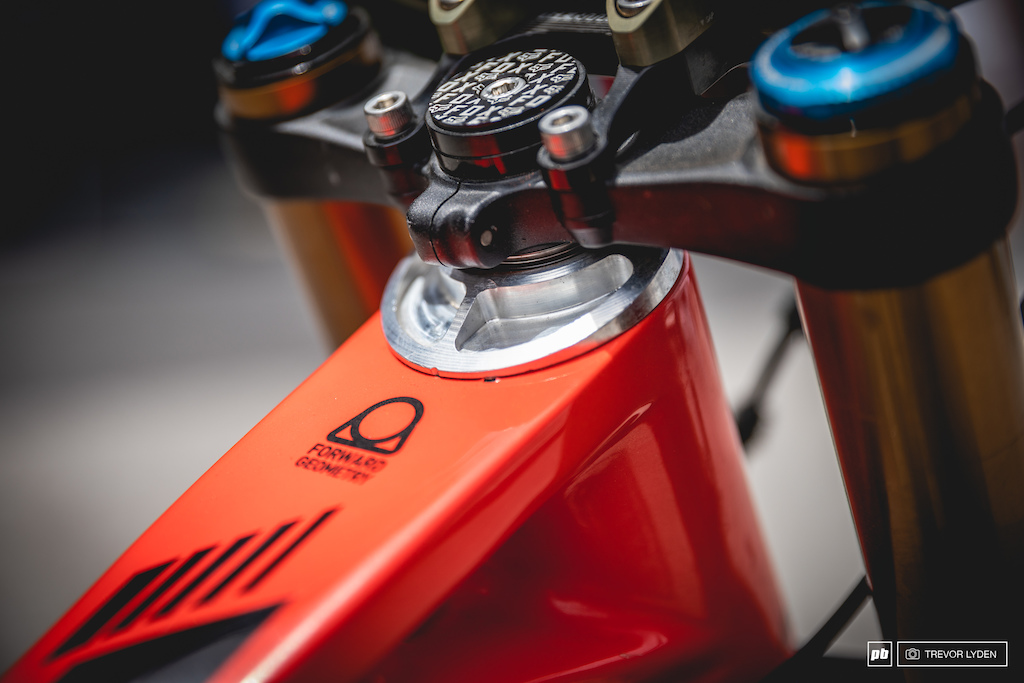 Laurie's +7mm cup has been cut down to keep his front end low.
Fork

Both riders are on Fox 40s and Mondraker are one of the only teams that have raced all three World Cups this year on the smaller wheel size, although we've been told that may change for Leogang. Their damping tunes up front are almost identical, except Brook has a bit more pressure in his fork. 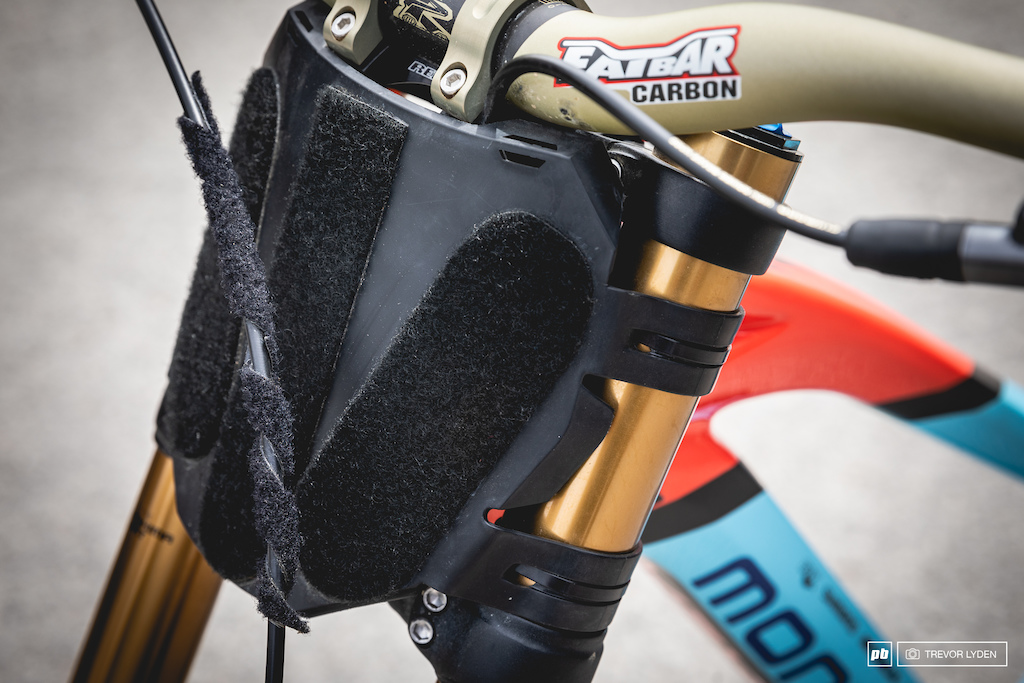 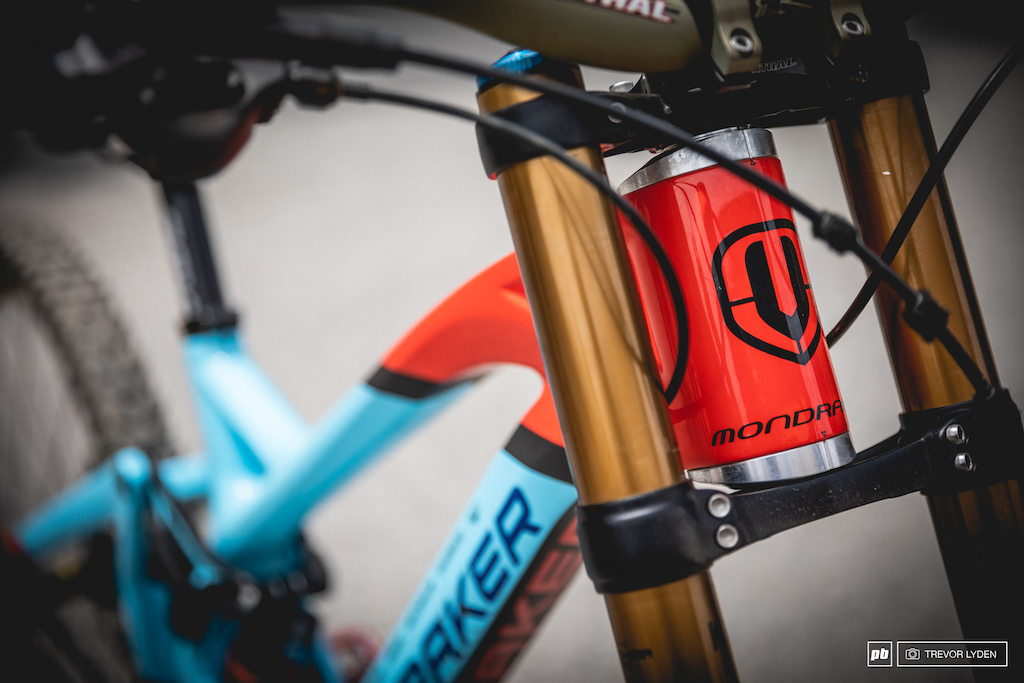 Both riders run a Fox DHX2 and they set these up similarly too, with Brook on a heavier spring and one click more low speed compression. 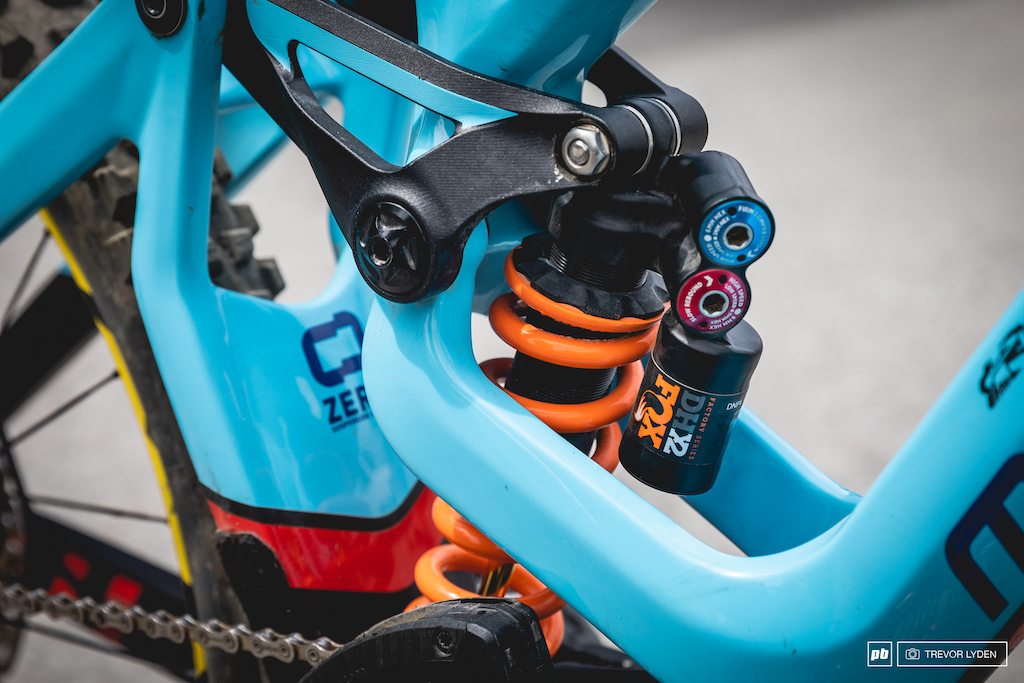 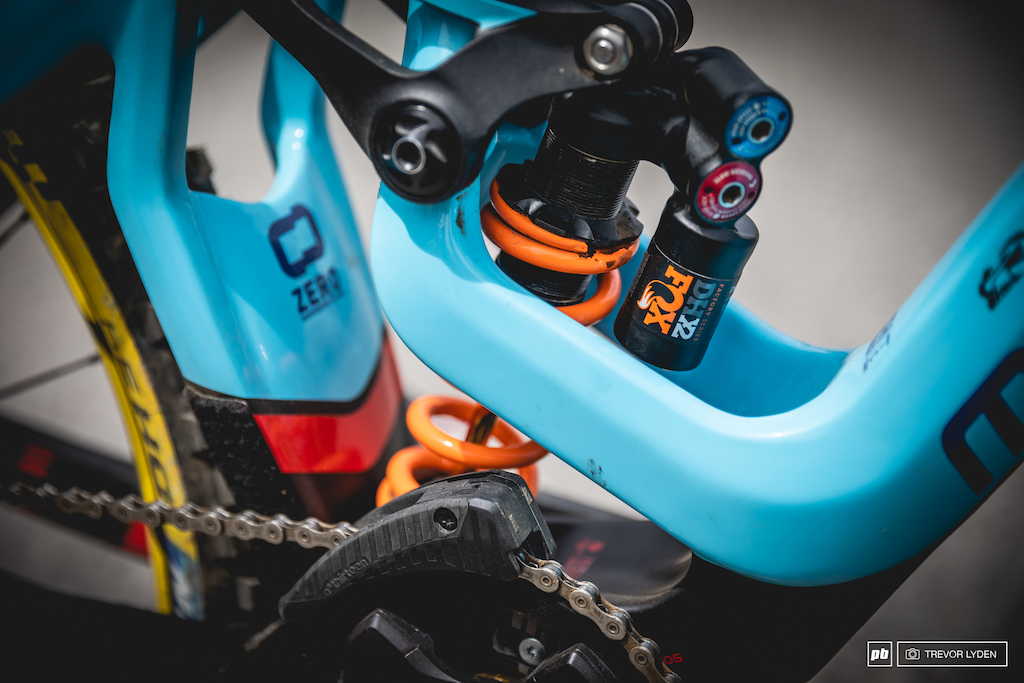 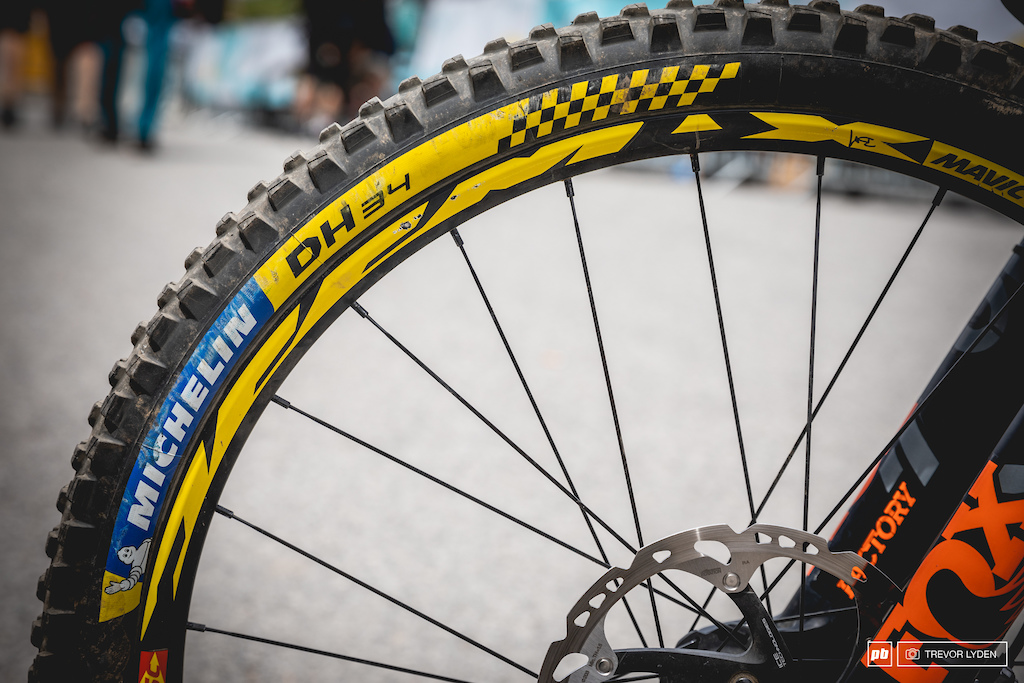 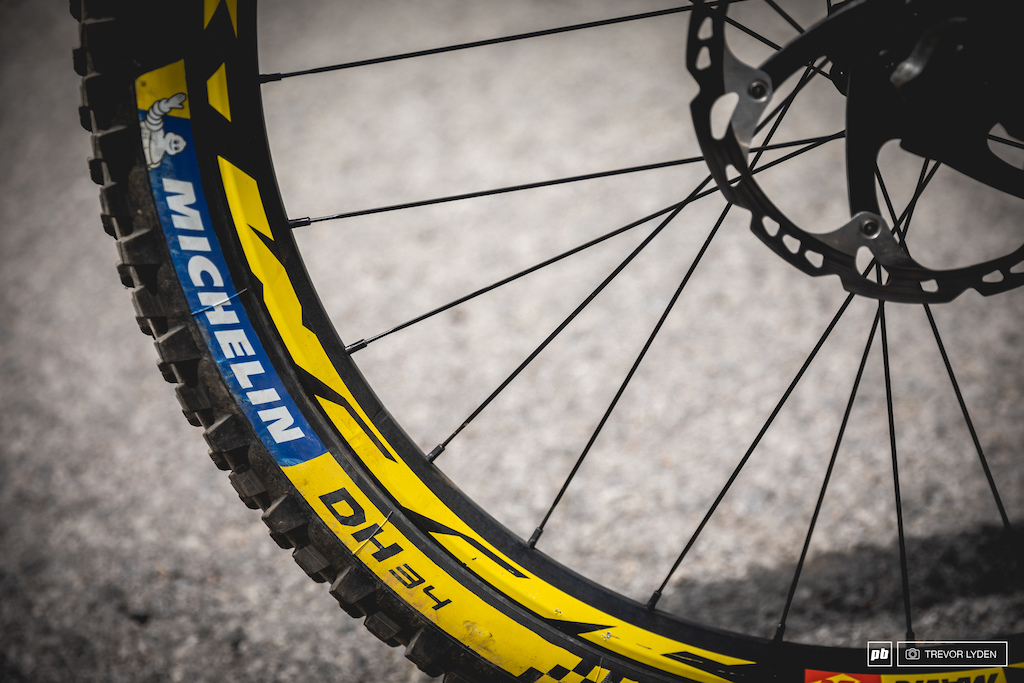 Things start to get really different when you look at the controls of the bikes. Laurie is running old reliable Saint brakes, but Brook is on the new XTR brakes. He's testing them this weekend and, apparently, prefers the lever blade's shape and the brake's initial bite. If Brook likes them enough, then Laurie will probably run them at the next World Cup too. Both riders also have different width bars and run different pedals and saddles. They both have the same Renthal stem though, each trying to get as low as possible on the bike. 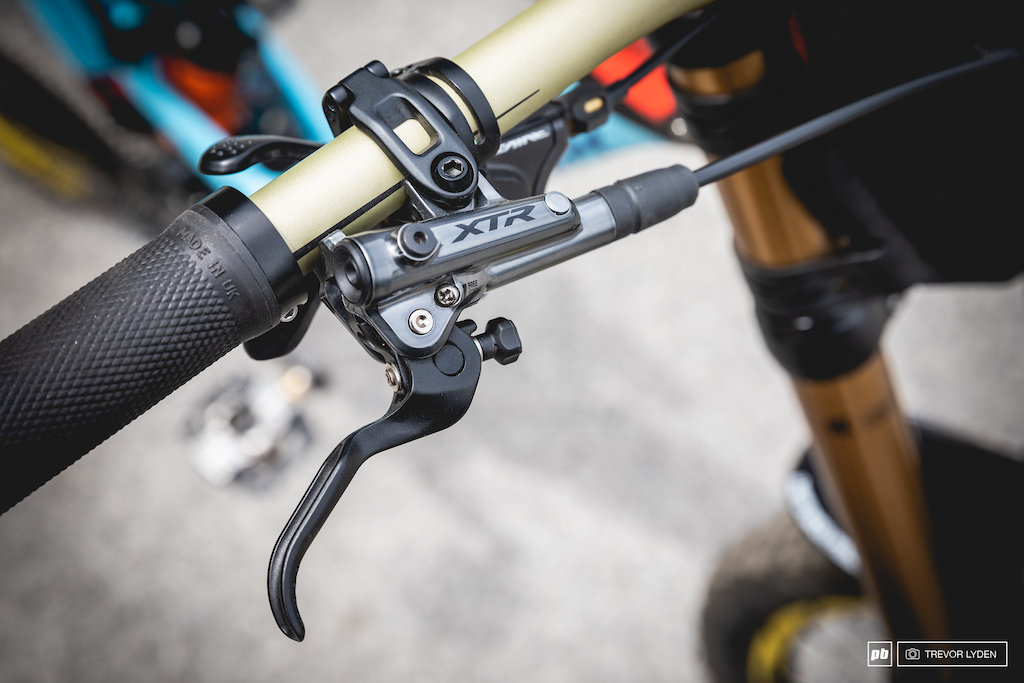 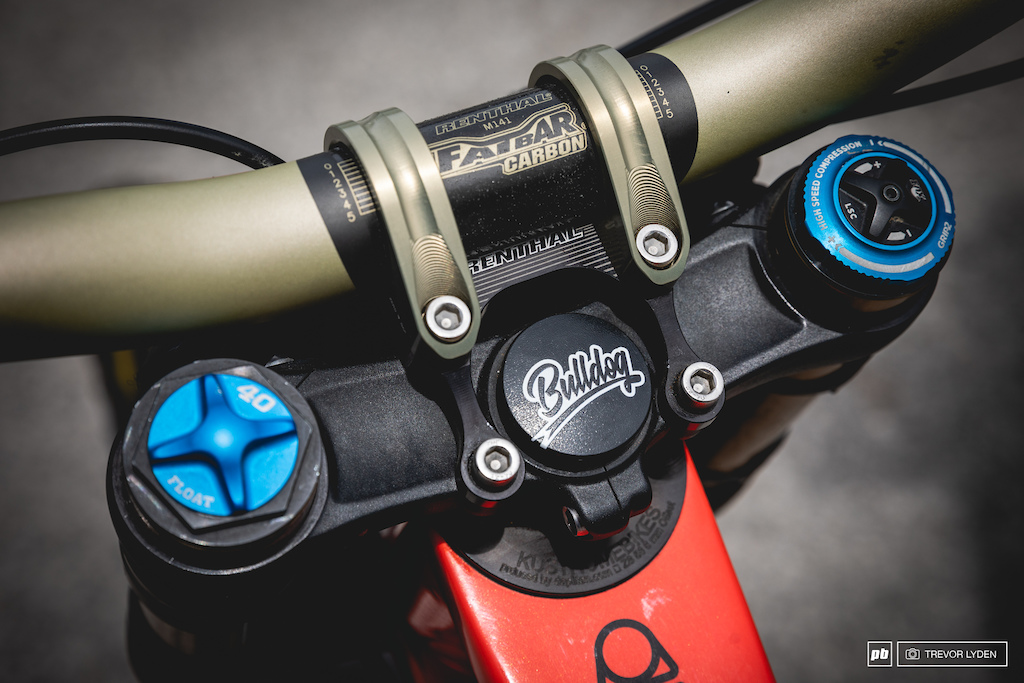 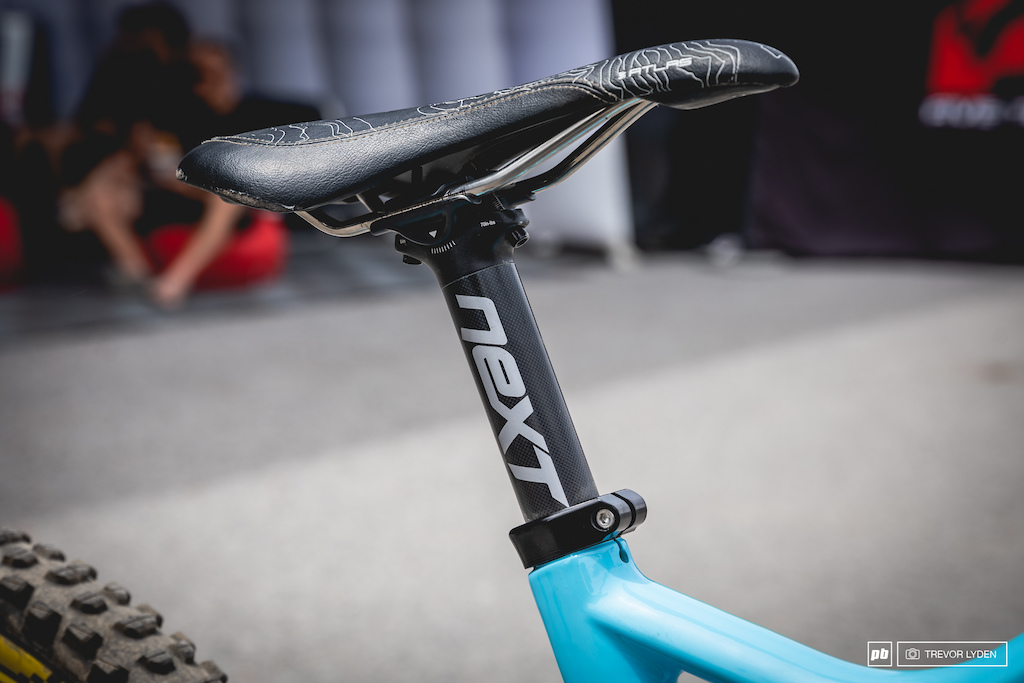 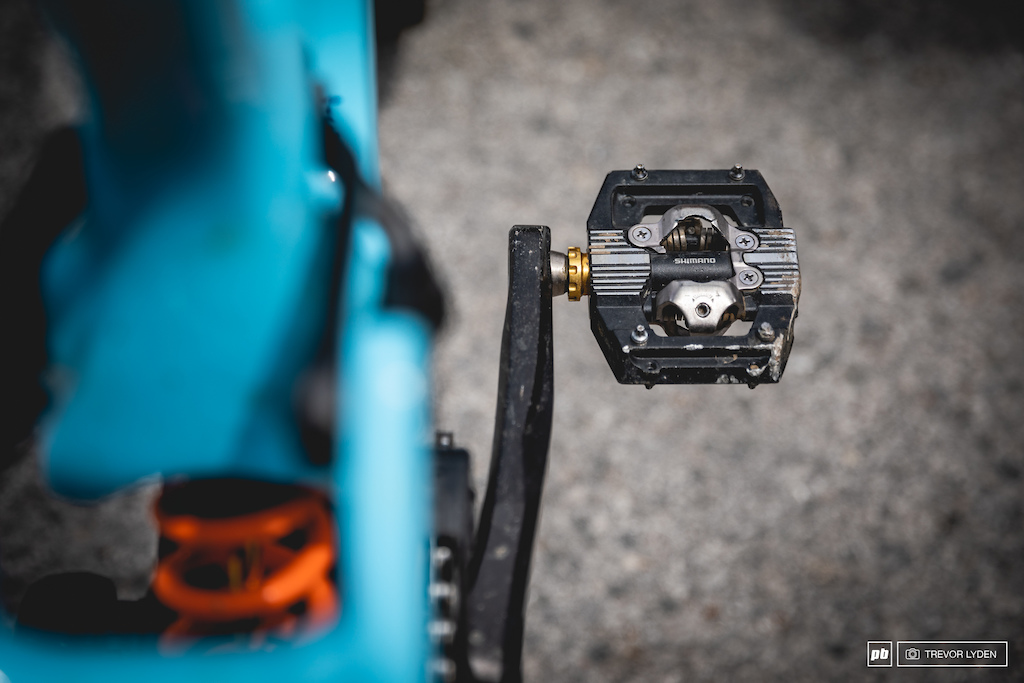 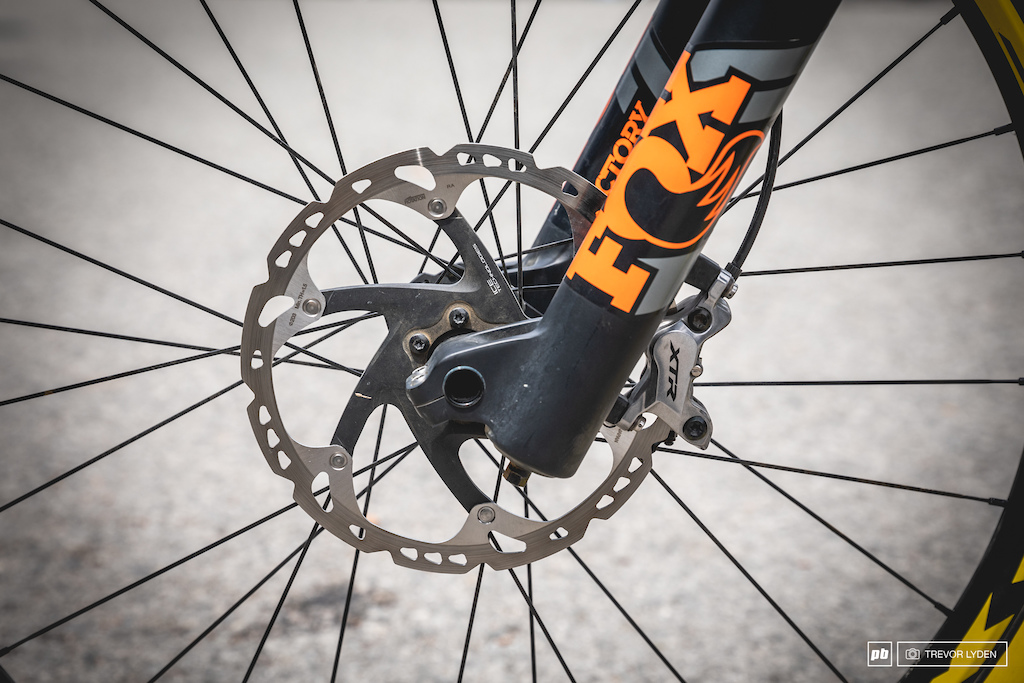 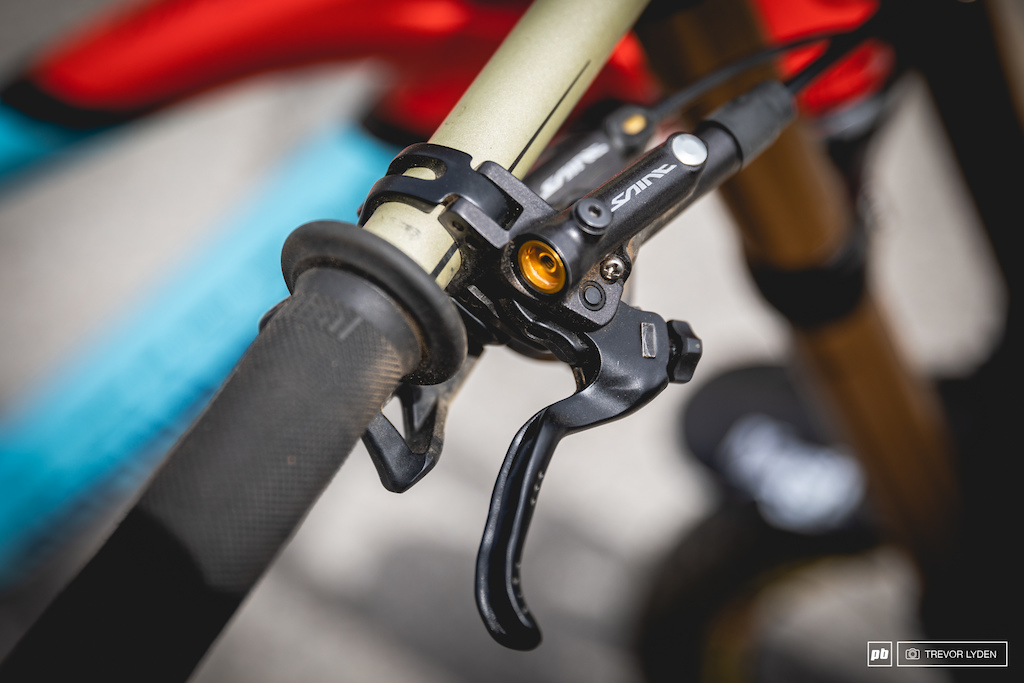 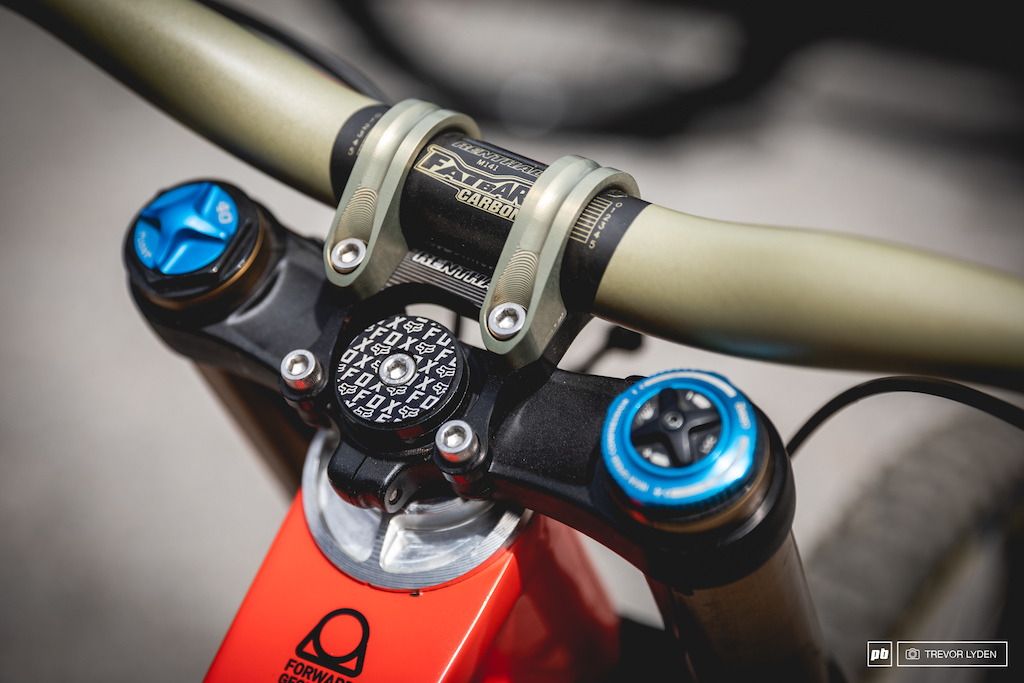 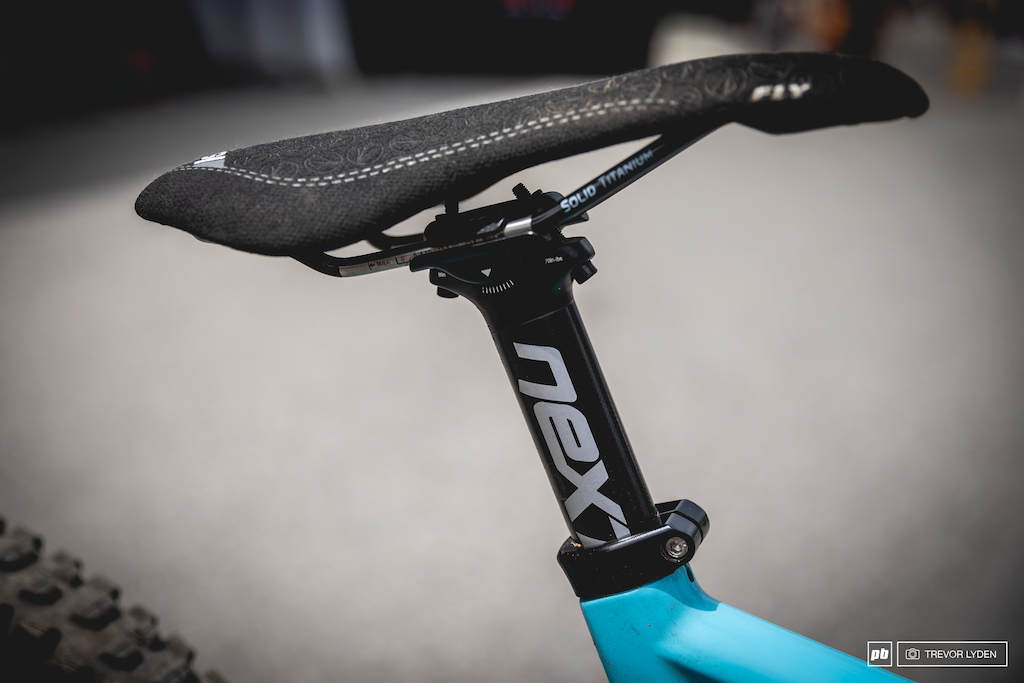 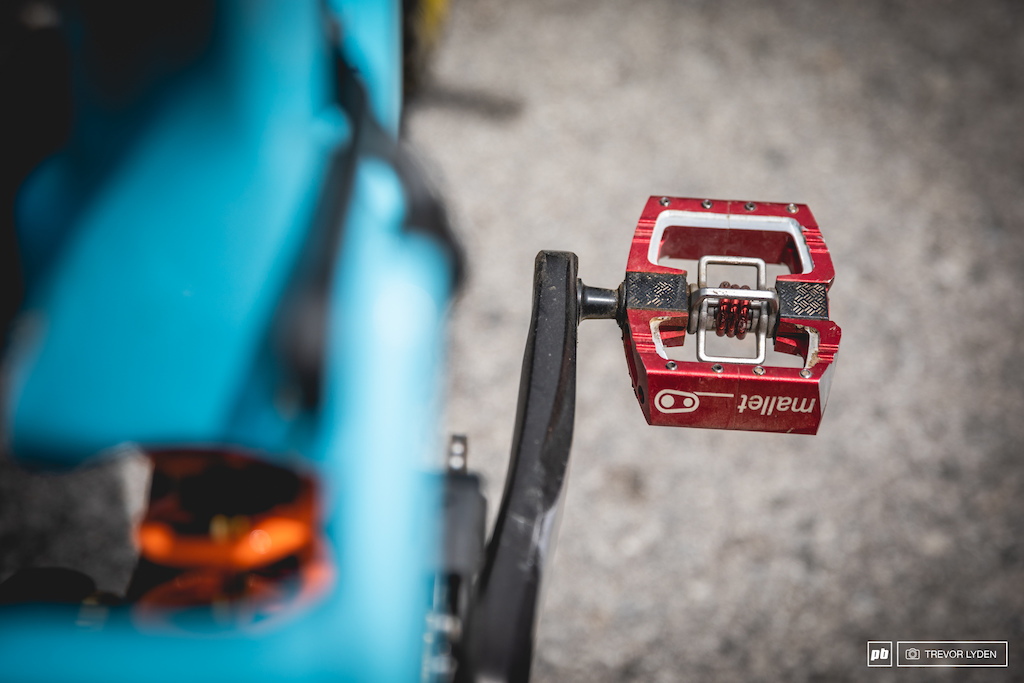 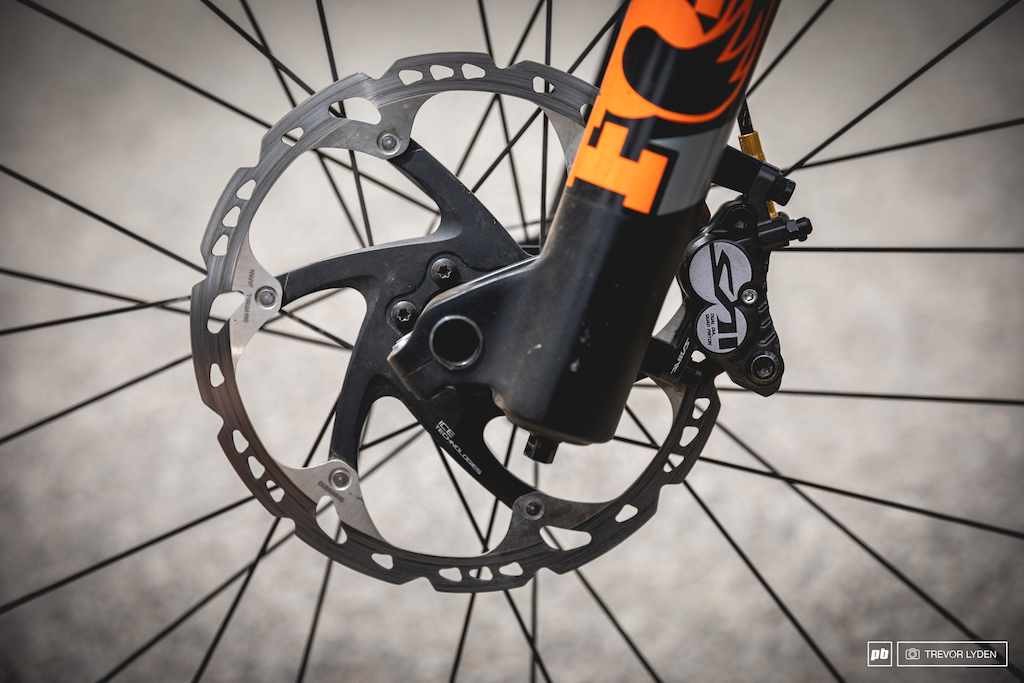 Both riders have identical drivetrains with a 36 tooth chainring up front and a 10 speed XTR cassette with the biggest three cogs removed. 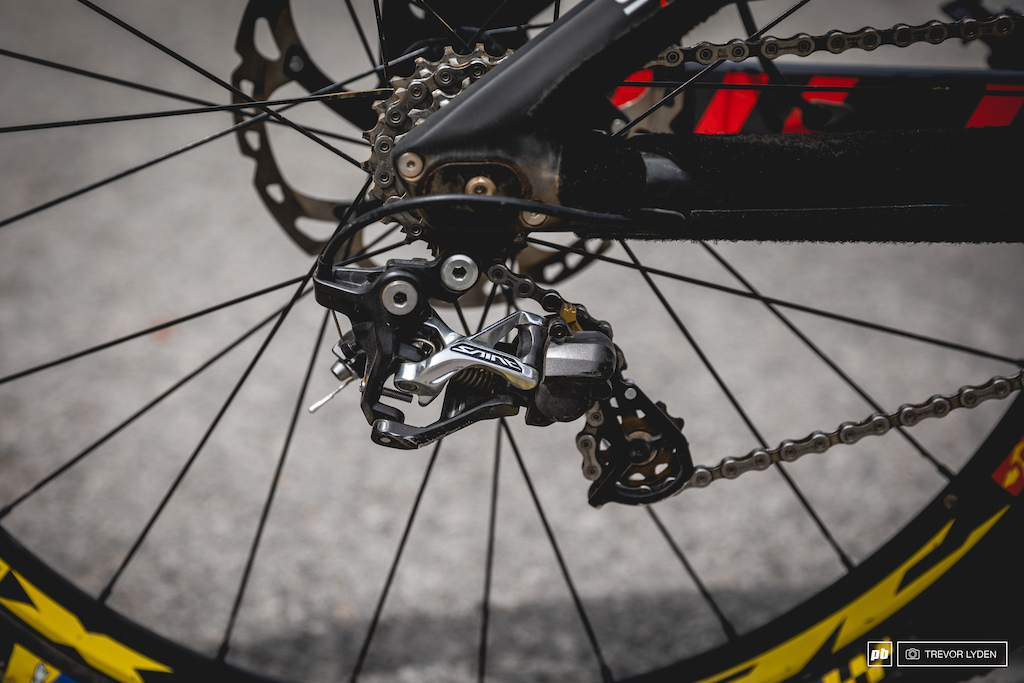 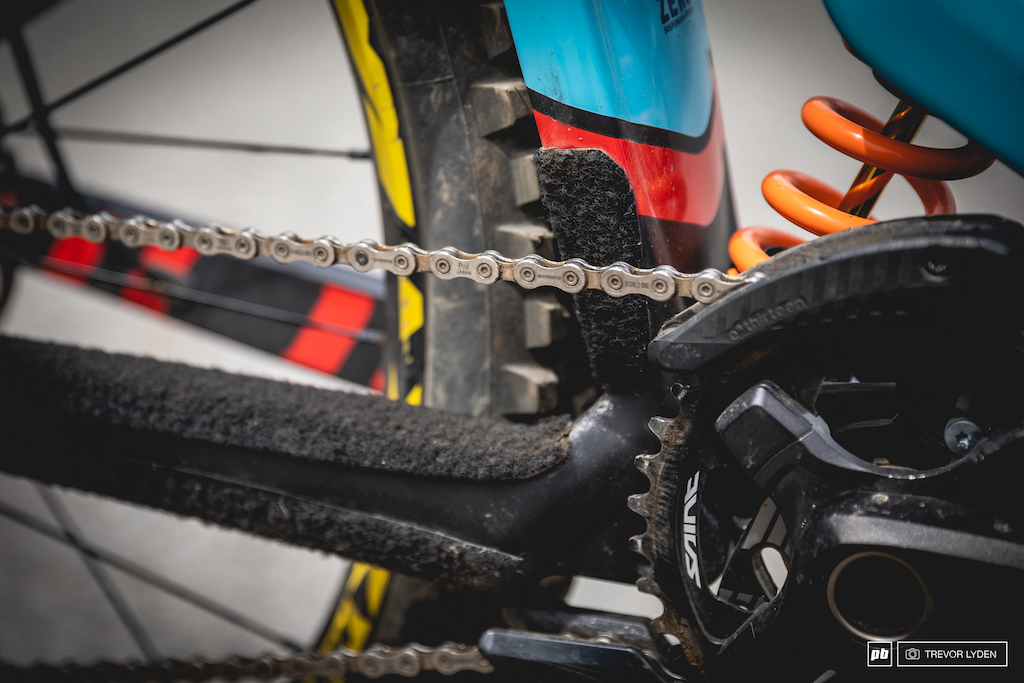 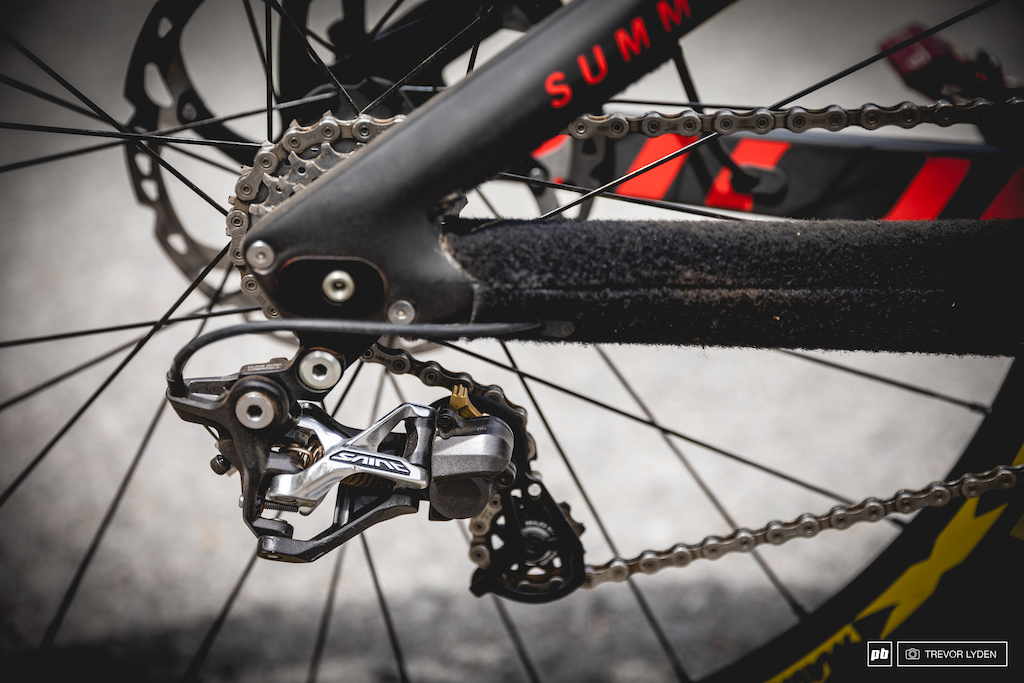 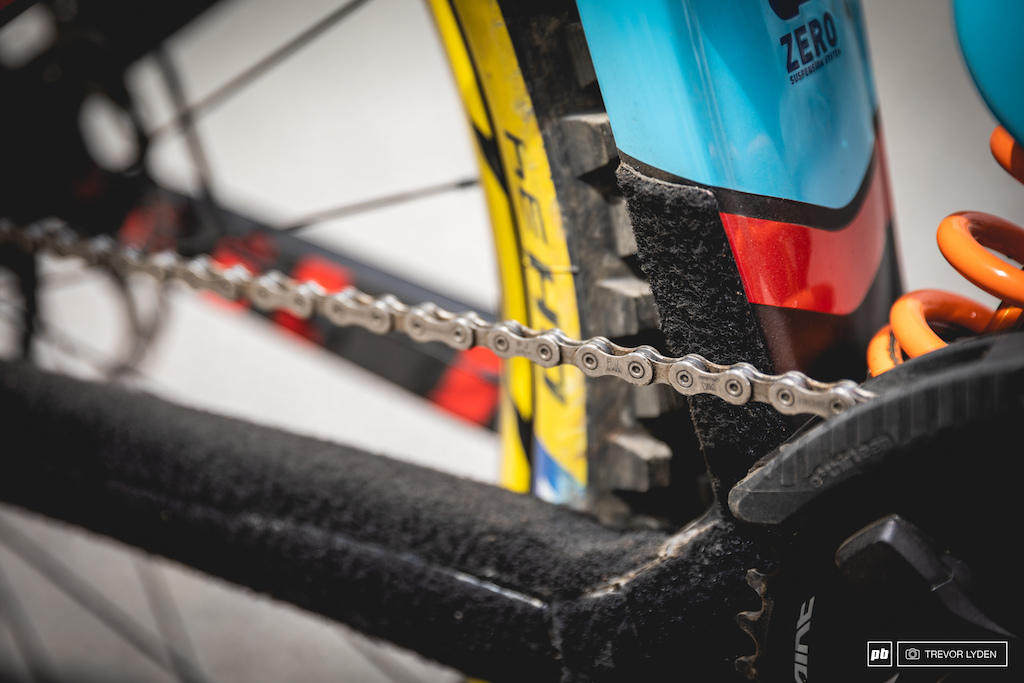 While we were comparing Brook's and Laurie's race bikes in the pits, the two Mondraker racers were out testing on Summums outfitted with 29-inch wheels and Fox 49 forks. As this article was in the proofing stages, Brook won the day using the 29-inch front end. Considering the similarities of the pair's setups, it would be a good bet that we'll see Laurie on a Mondraker mullet next race. Greenland's smaller stature, however, may affect that decision. 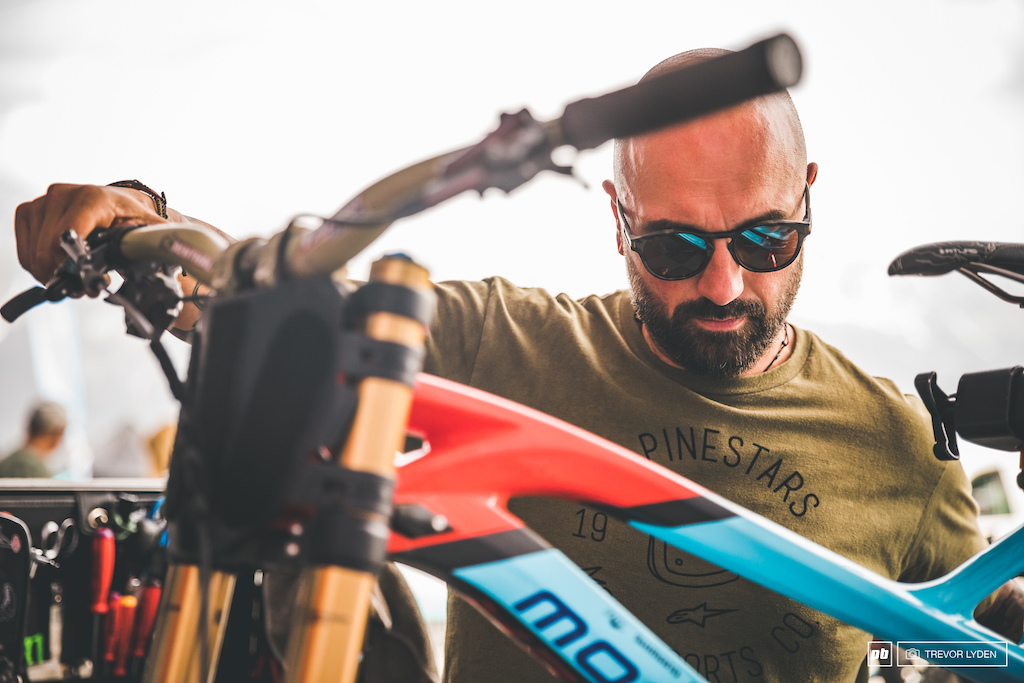 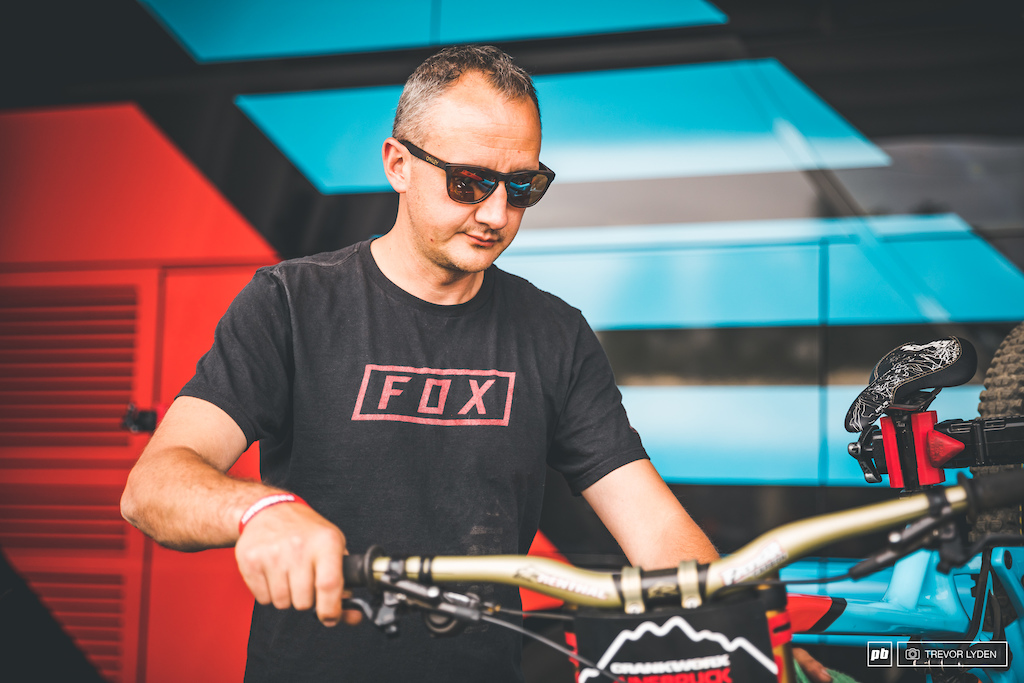 rezrov (Jun 16, 2019 at 20:37)
I'm the same weight as Laurie and typically run 23-25 psi on the rear with a Forekaster (EXO) and a Spank rim that I beat the f*ck out of. I tend to ride/land rear-biased too. Laurie is also on wider DH rims and using a DH casing. It's a pretty normal tire pressure for someone at 160 lbs.

tgent (Jun 17, 2019 at 9:20)
I hear this all the time, but many people think they are running 30 PSI because that is what their pump says, when in reality they're usually running low 20's. Unless you measure your tire with a digital gauge you have no idea what pressures you are running and very few people are running less than 20 or over 30.

lozgreenland (Jun 18, 2019 at 1:08)
Michelin have some new technology in the sidewalls, because of this the effective psi has to be dropped massively otherwise they feel too stiff. Inserts would be fully overkill in this tyre...!

lehott (Jun 16, 2019 at 23:33)
Rebound is where the stanchions come back(speed?)from being compressed? On my Manitou I've only got rebound and the air psi (+lockout)

srjacobs (Jun 17, 2019 at 9:28)
Rebound is almost entirely dependent on spring rate. So, the heavier the rider, the stiffer the spring, the more rebound damping that's required. It's a fairly set and forget thing for DH racers, whereas compression damping usually comes down to preference and track surface conditions, etc... I would expect Brook to have an extra couple clicks of rebound over Laurie, but all that really shows is that Brook is heavier and has a stiffer spring on his bike.

BaGearA (Jun 17, 2019 at 9:51)
@lehott: on cheaper suspension the compression knob is often excluded , cause even with A terrible compression setting you can still control the bike , but with no rebound you'd never be able to get an even half decent run out of a bike

Primoz (Jul 5, 2019 at 4:32)
@srjacobs: not almost, it is entirely dependant on spring rate. Only the spring returns the suspension and the rebound needs to control that. With compression settings you can be a jackass and huck to flat or ride smooth. The compression settings should be different for these two cases.

maglor (Jun 17, 2019 at 2:09)
It's mentioned a few times how they both want to be low on the bike and brook even has a custom low stack headset and yet they both run quite high 30mm rise bars, i'm intrigued why?

seatsniffer4 (Jun 17, 2019 at 2:40)
Bar rise has a different effect to stack. With stack you gain height at the headangle, so end up losing some reach. With bar rise it’s mostly vertical so reach is unaffected

takeiteasyridehard (Jun 16, 2019 at 22:06)
Do those mallet pedals have the leading outside edge machined or ground off a little to help with deflection on ground strikes?

iluvatar83 (Jun 17, 2019 at 9:00)
No Ben didn‘t machine the headset himself. That was a guy called Sergio Tschenett from the Bike Patcher in Müstertal, a true genius when it comes to building custom parts for Pros!

beeboo (Jul 9, 2019 at 11:28)
Both bikes are practically identical. Was there even a purpose to this article

I do find the foam inside the frame interesting! I wonder what kind was used? How much weight does it add? And how much of a difference it really makes? Now that’s worth writing an article about!!!!!

philstone (Jun 17, 2019 at 4:27)
I thought the blade shape of the Saints was the same as XTR. Along with the power (seeing as the pistons are the same size..) So what are the differences that give more initial bite??

oldfaith (Jun 16, 2019 at 20:19)
Nothing is holding them. A photo only needs a fraction of a second to be taken so what you aren’t seeing is the hands of the two assistants at the rear wheel for the brief moment they let go, the photo is taken and then they quickly grab the bike before it kips over

jamessmurthwaite Mod (Jun 16, 2019 at 21:54)
@oldfaith: Nailed it. If you look at the reflection in the Fox truck you can actually see Benny ready to catch the bike

spandex (Jun 17, 2019 at 14:43)
@jamessmurthwaite: nice. I had thought that solution most likely, just requires good timing and some willing assistants i guess. thanks for the reply

nprace (Jun 16, 2019 at 22:38)
What do the clicks mean for compression? Is that from fully open (un-dampened) or "fully" closed (maximum dampening)?
BTW. Is it damping or dampening?

ka-brap (Jun 17, 2019 at 0:46)
Click counts are usually given from fully closed since that point is constantly the same. Measuring from open is not constantly the same given differences in production tolerances. Fully open on one fork could be different from fully open on another, but fully closed will always be the same. Damping refers to suspension motion, dampening refers to getting something wet.

Good to see a bike review of 2 people from the same team.

downcountry (Jun 16, 2019 at 15:36)
Yeah, ultimate failure of carbon bars at the clamps are pretty common. Resonance frequency is also a big deal that seems to be better with aluminum. I’ve cut down some 800+ 35mm bars and they were brutal. Someone needs to do some physics work to sort this stuff out.

ericolsen (Jun 16, 2019 at 22:09)
@nigelh: they probably want the low stack height to minimize the reach shortening effect of raising the bars in line with the head tube angle. With riser bars you can in theory get rise straight up without losing reach. Although many people run the bar rise rolled slightly back.

gpgalanis (Jun 16, 2019 at 22:15)
Is it usual to have the same compression settings but different spring rates in their forks and shocks?

aidy (Jun 17, 2019 at 0:33)
if it does the job and offers more comfort, not everyone likes thick grips. i'm tempted to try it myself next time around!

rideonjon (Jun 17, 2019 at 14:41)
Lots of benefits to slide on grips(AKA non-lockon)Cheap,comfortable ,shimable to make the grip larger with shrink tube and they last longer due to there being more grip to wear.

levizbrown (Jun 16, 2019 at 20:39)
First of all what the heck is up with this foam filled frame shenanigans haha?? Second, what are they doing to quiet down those xtr brakes?

levizbrown (Jun 17, 2019 at 12:28)
@IllestT:dam, I have them too and all I can hear while riding is the brake pads ticking against the caliper

jaame (Jun 16, 2019 at 16:25)
Those mavic wheels totally ruin the look of the bikes.
When I see them I think “those wheels are mavic, I recognise the colours... and they look terrible. I’m never buying any!”
Brand recognition at its worst.

jaame (Jun 16, 2019 at 17:32)
@Ryan2949: I would think that too if there wasn’t a terrible colour clash going on. Cyan and red bike with flat yellow. It looks turd.
They should change the colour of the bike or the wheel graphics. Or do a special edition black on black like the Sam Hill deemax pro

Balgaroth (Jun 16, 2019 at 23:41)
Deemax have always been yellow and with Mavic race heritage changing that would be a shame, same as getting a green ferrari really.