Round Up: Women's MTB Wednesdays - Issue 3 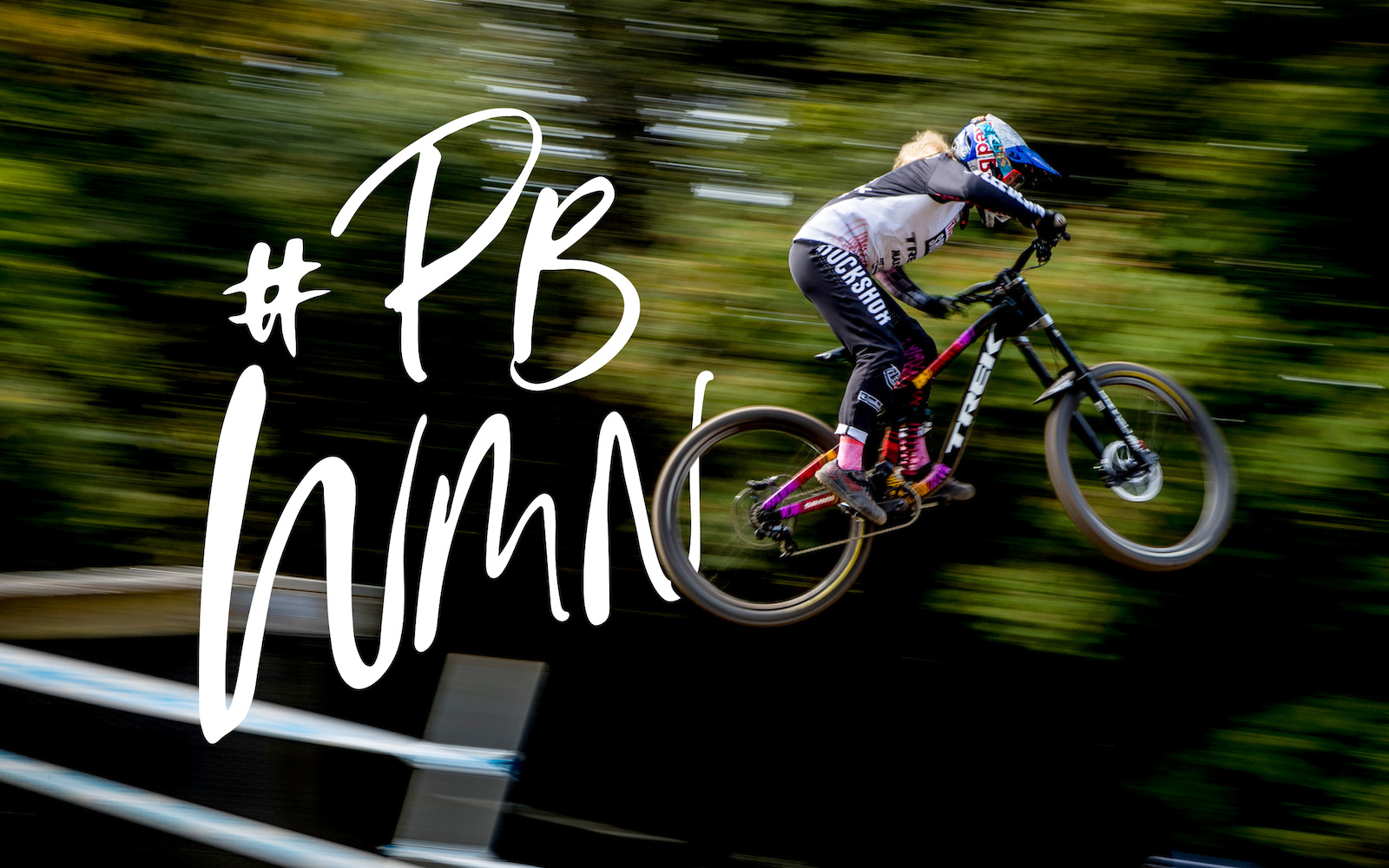 Welcome to the third issue of the Women's Wednesday round up, a monthly digest of some of the most notable achievements from women in the bike world. We want to highlight all of the women who work to push our sport forward, so we plan to share news, race results, our favorite video clips, and more. You can help us find more content from rad women by using the Instagram tag #PBWMN.

The past month has been a wild one for women's freeride progression, with Dark Horse, Audi Nines, Proving Grounds and Hangtime all taking place within the past 30 days. Highlights were 12-year old Tayte Proulx-Royds riding the massive drops and jumps on the Dark Horse Invitational course and taking the Dark Horse Award, Caroline Buchanan landing the world's first female MTB frontflip at Audi Nines, and a women's category at Proving Grounds for the first time, which was won by Cami Nogueira.

It was also an exciting one for racing, with the final rounds of the World Cup DH and XC taking place in Snowshoe last weekend at the same time as the penultimate round of the EWS in Finale Ligure. This week, we've got Crankworx BC to look forward to and next week we go to the Tweed Valley for the final round of the EWS.

Speaking of enduro, the Gowaan Girls made a short film about how the women's scene of racing in Enduro has become more and more competitive over the last few years and their value which is worth a watch. They also gave £1000 to Robin Goomes to help her get to freeride events through their A Gowaan Gift initiative. 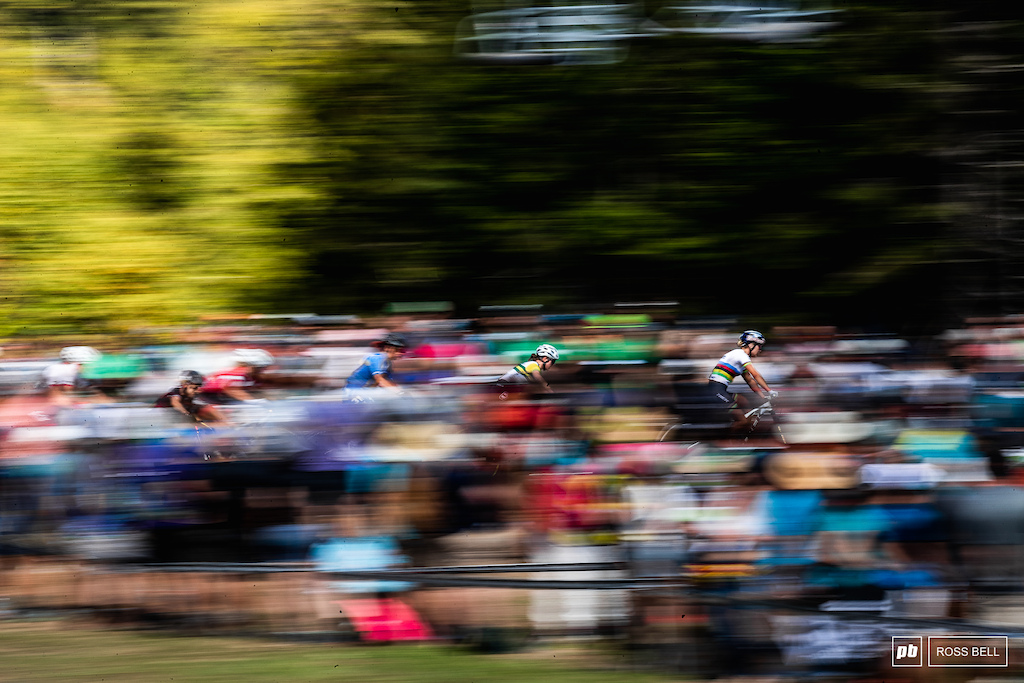 The final XC World Cup of the year in Snowshoe, West Virginia.

We've now wrapped up the World Cup series, with the final round taking place in Snowshoe, West Virginia last week. It was a busy week for downhill riders, with two rounds crammed into six days of riding to wrap up a long season. With two mistakes in as many races for Myriam Nicole, she lost her lead in the overall to a charging Vali Höll. Höll came to Snowshoe without an elite World Cup win to her name, but left with two and an overall title to go with it. Nicole finished second in the overall standings with a consistent Camille Balanche in third, Tahnee Seagrave in fourth and Marine Cabirou rounding out the top five.

Loana Lecomte was able to clinch the overall World Cup XC title in Lenzerheide, but sat on the sidelines for the Snowshoe World Cup XC due to ongoing health problems that have sapped her energy. We wish her all the best for a return to health for 2022. Taking second in the overall was Evie Richards, who followed up her impressive win at World Champs with two World Cup wins. She also took the win in the Short Track ahead of the longer event. Third place in the overall standings went to Jenny Rissveds, fourth to Rebecca McConnell and Sina Frei finished in fifth place.

We've got one more round of the Enduro World Series left in the Tweed Valley in the UK on October 2. As of now, Melanie Pugin leads the series ahead of Morgane Charre and Isabeau Courdurier. 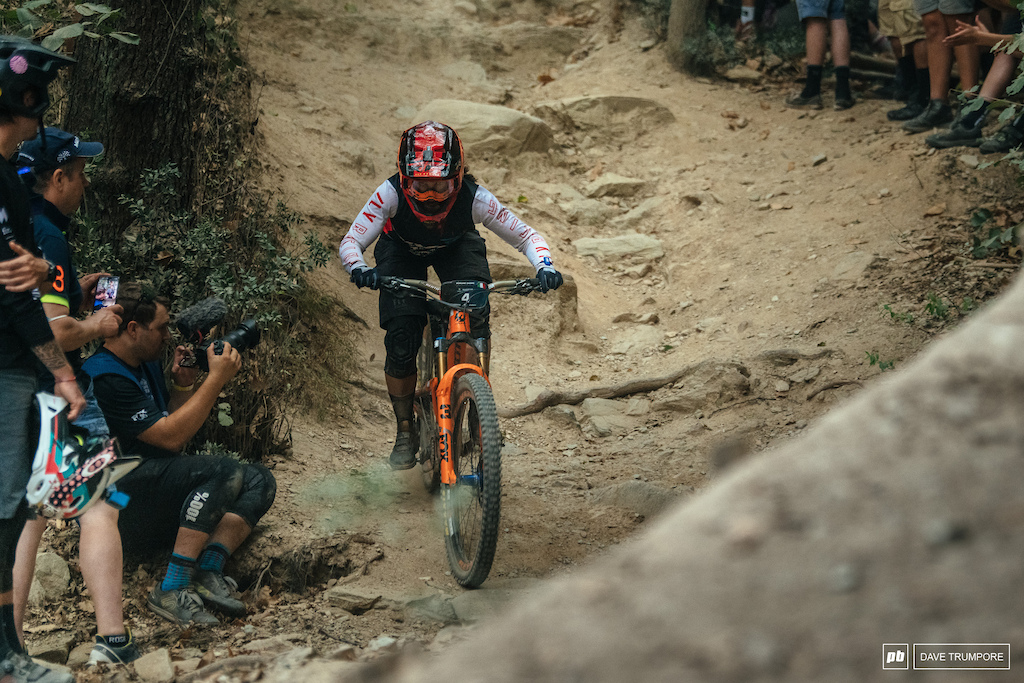 Domination in Finale for Morgane Charre.
EWS Finale Ligure - Round 8 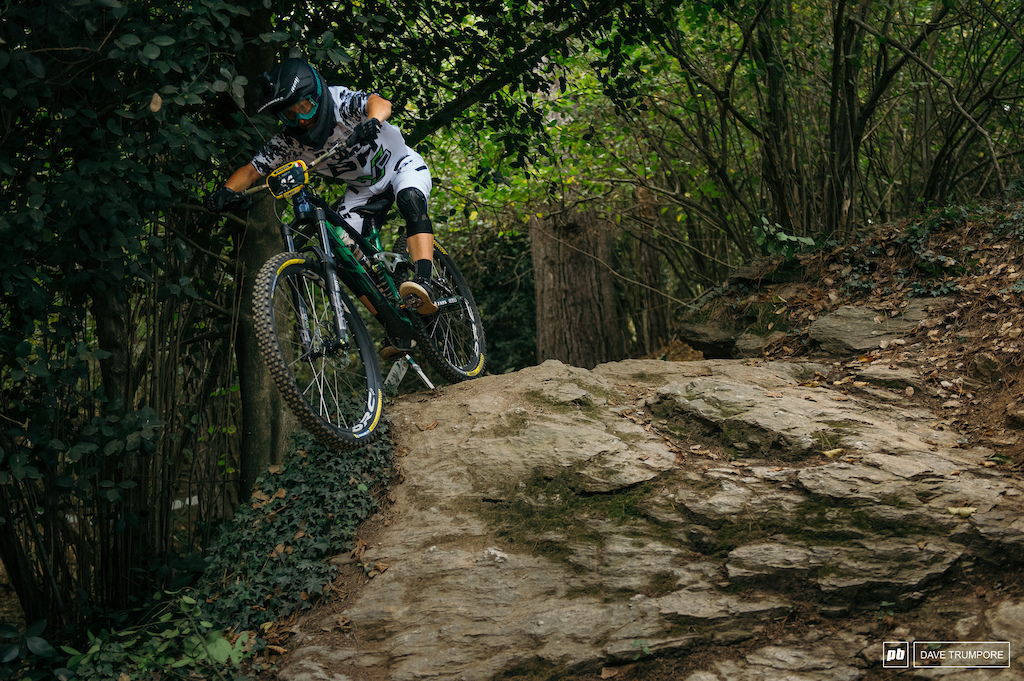 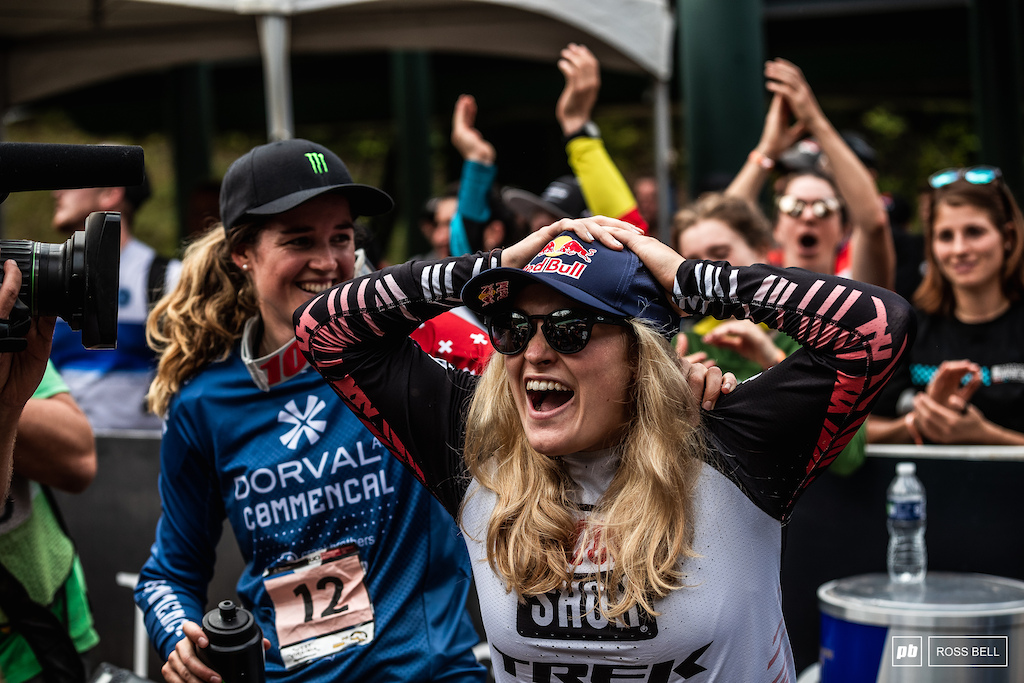 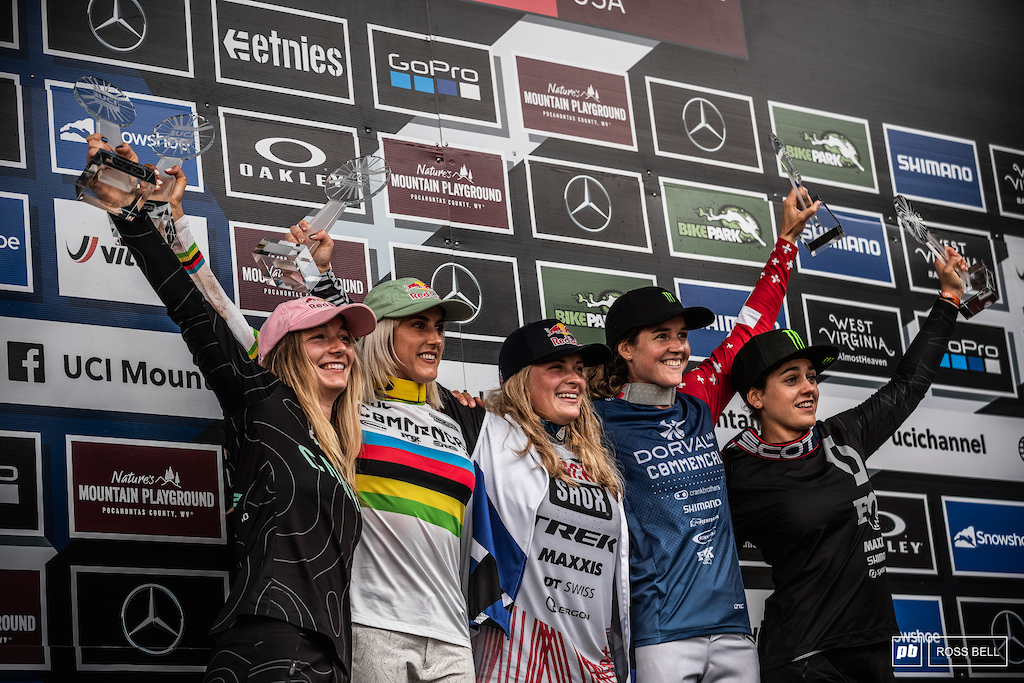 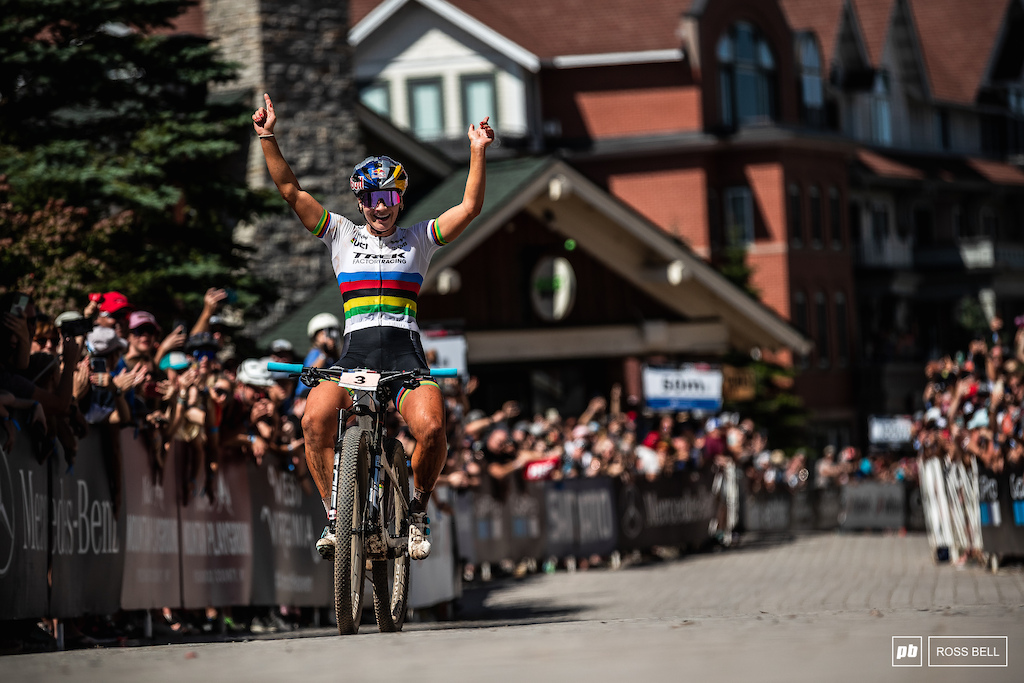 Evie Richards takes the World Champs stripes and then back it up with two World Cup wins.
XC World Cup Snowshoe - Final Round: 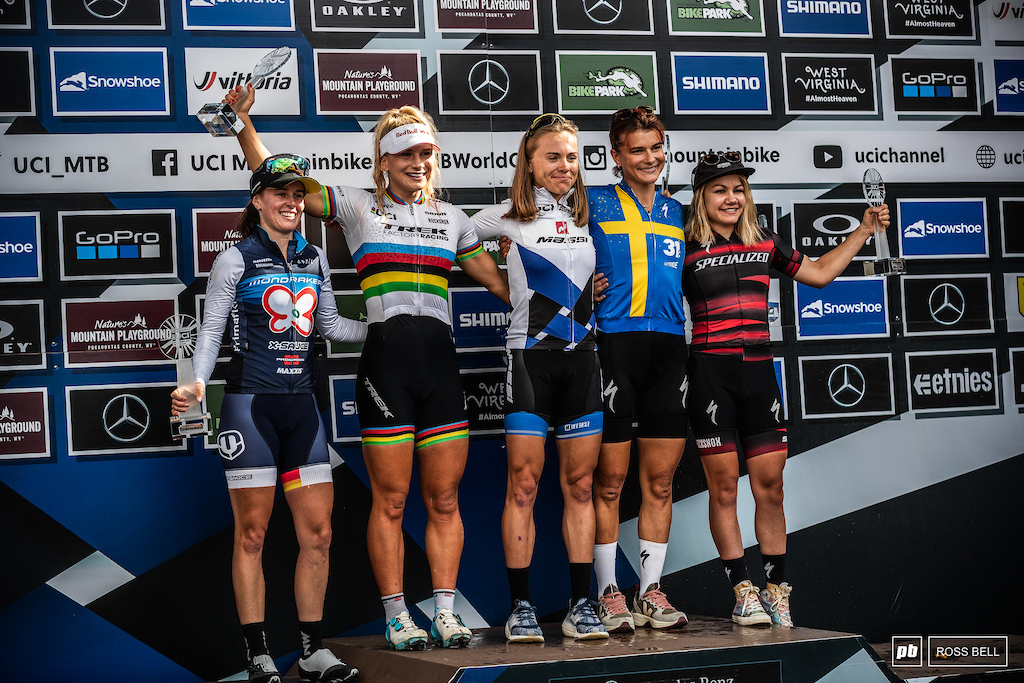 Loana had the overall secured after Lenzerheide. 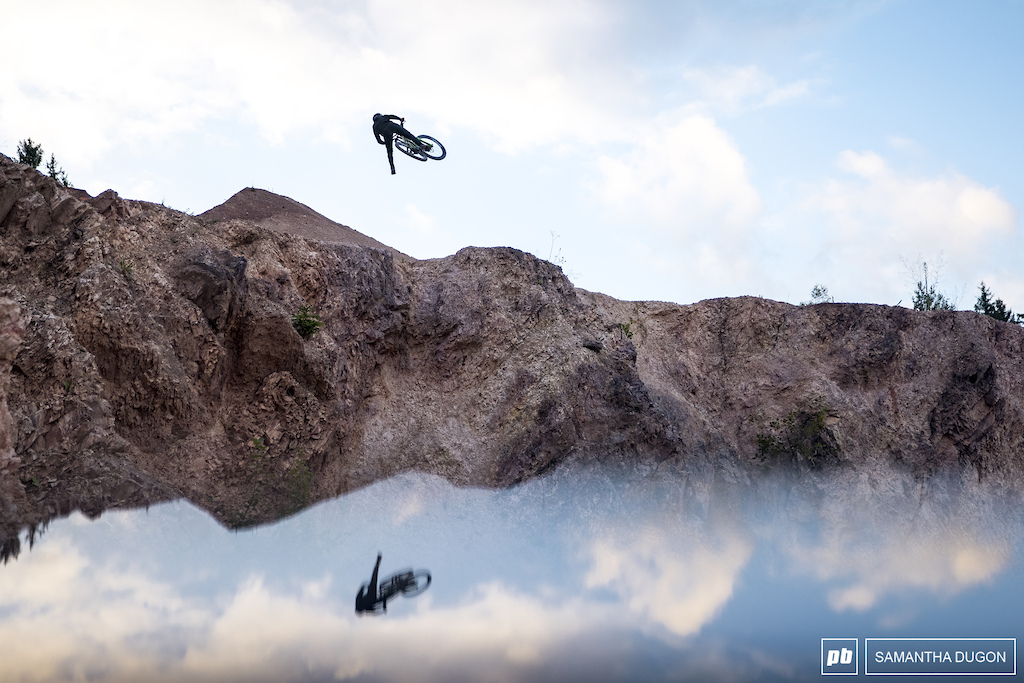 Robin Goomes styling up the 60ft hip on Freeride 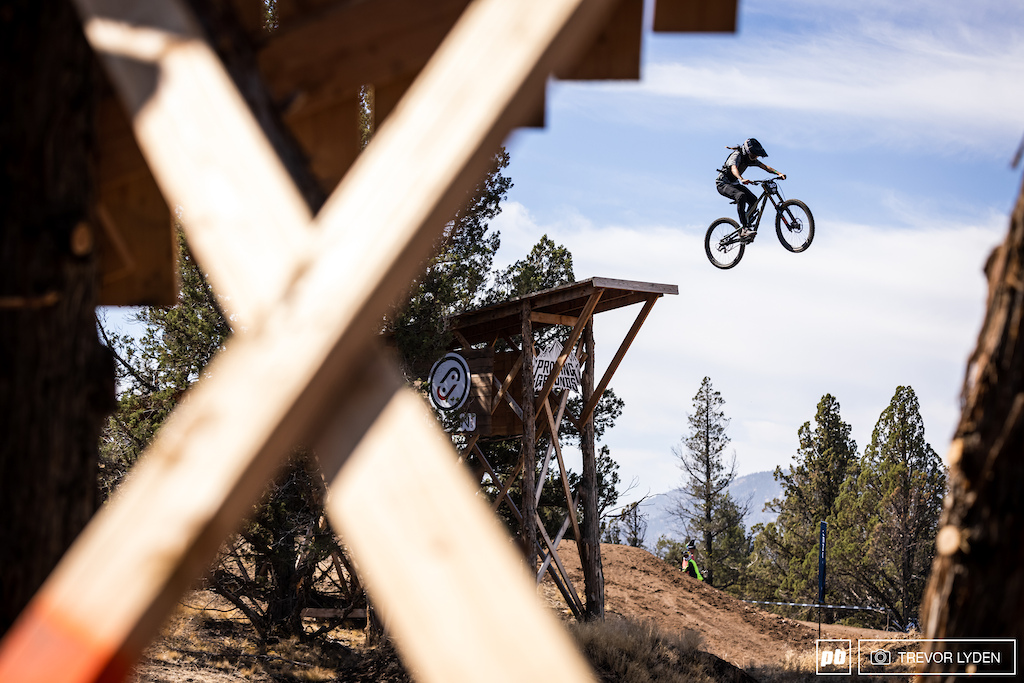 With events all across the board this month, from Audi Nines to EWS and XC races to Dark Horse, we have a whole range of bikes to check out. 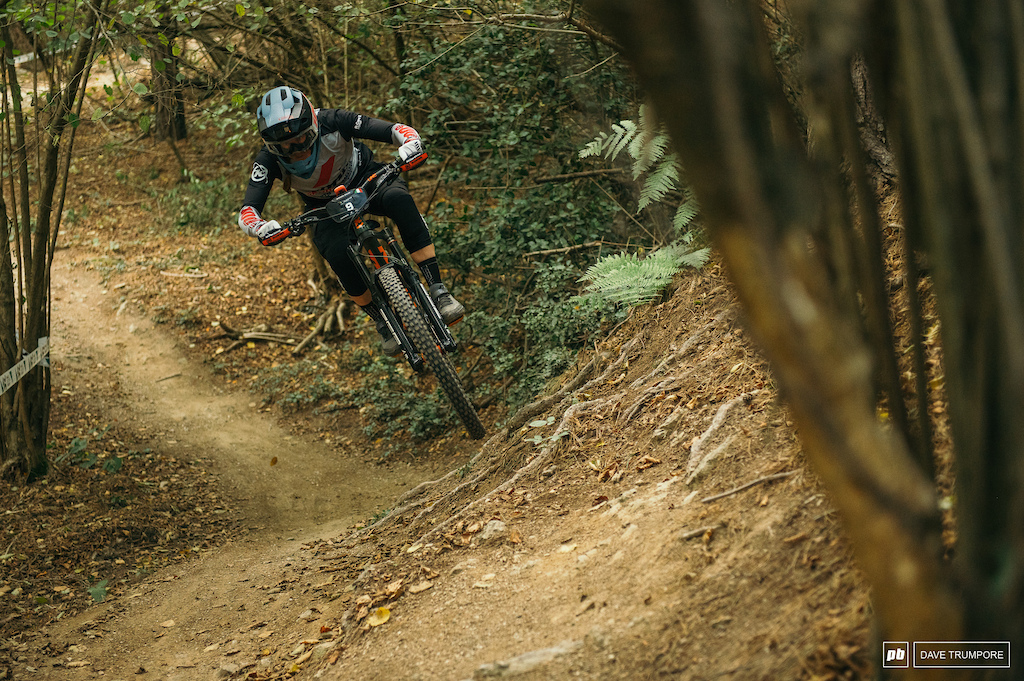 Miranda Miller finished third on the Pro Stage in Finale. 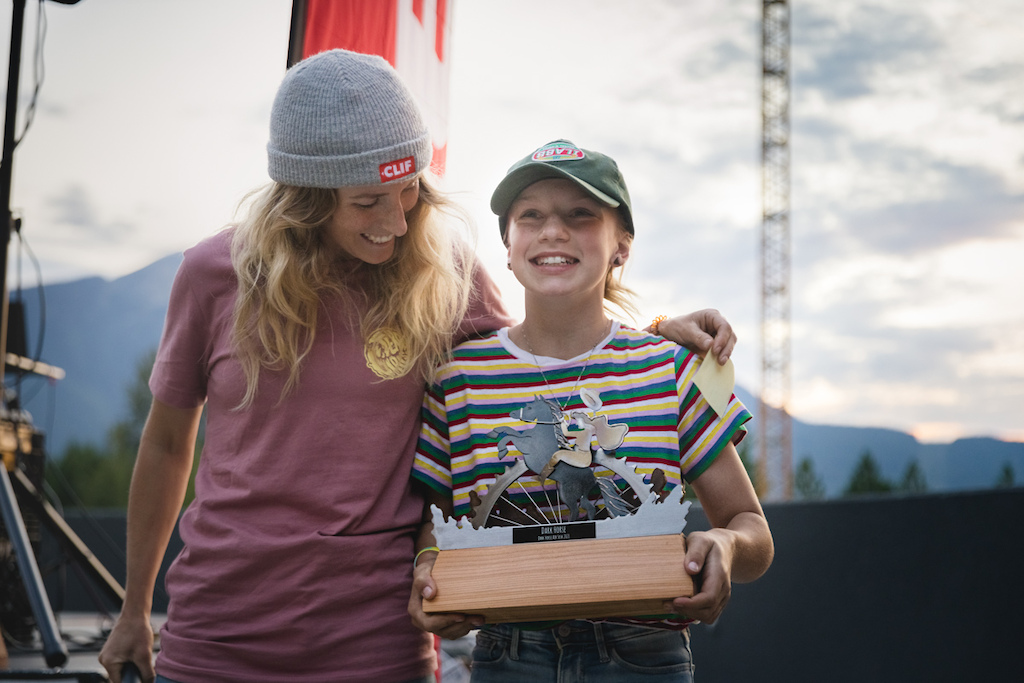 We got to know two young guns in the sport, Tayte Proulx-Royds and Gracey Hemstreet. Proulx-Royds is just 12 years old but was sending the jumps at Casey Brown's Dark Horse event and took the Dark Horse award, while Hemstreet took the bronze medal at the DH World Championships in the Junior category as well as a couple of World Cup podiums.

Getting to Know: Junior World Champs Bronze Medallist Gracey Hemstreet
Getting to Know Tayte Proulx-Royds, the 12-Year-Old Who Won the Dark Horse Award

As always, there's a lot to celebrate this month, and we love to see it. Remember to tag #pbwmn on Instagram to help us find more content from all the rad ladies out there.

Im completely for promoting the womens side of the sport and DH should be proud having had equal prize money and men and women riding same tracks but shouldnt the focus be on inclusivity and reporting everything mens and womens equally?
Not divisively by having specific women's Wednesday? It smacks of tokenism and accountability.

An example of change - BBC
They now headline their main BBC Sport page with womens football and cricket just like they do for the mens versions.
They dont have a specific - 'heres the womens round up if you're bothered' option.

preridedump (Sep 23, 2021 at 6:17)
@pen9-wy: OR stop being an intellectual try hard and understand that with all of the content on here things can get lost in translation. SO, here's a roundup of all the lady shredders and all the sick shit they have been doing in one place. FYI - All of this content has all been posted to the main page JUST as the mens have AND here's a fkn recap! Pay attention ya renob.

sarahmoore Mod (Sep 22, 2021 at 13:37)
Thanks! She called it her “second first year elite” since she crashed at the Leogang World Champs in her first race in the Elite category last year and then missed the entire season (Worlds was the first race of the year in 2020).

You need to catch up with Anneke Beerten and the works she's doing not only with women's & youth MTB but Brain Injury Recovery. IMPO, it would make for a good article in your PBWMN series.

Willikers (Sep 22, 2021 at 18:41)
Yep, she's a teenager yet so many pbike commenters were slagging her off..I'm a guy but eff that patriarchal crap. She's the new paradigm and is simply going to decimate the field but I hope for big fights from The Young Frenchies, Pompon and Tahnee

karatechris (Sep 22, 2021 at 18:25)
I haven't hard anything yet. There are probably lots of us out here praying for good news on Jess. Wishing her all the best but completely respect the her close circle for taking whatever time they need.

THEBIKEFIX (Sep 22, 2021 at 21:50)
We are all absolutely gutted for Jess who is one of the rising stars of our sport. Jess has a broken femur which has been operated on successfully. She has a broken collarbone which is to be operated on shortly. She also has a broken wrist , cracked rib & two small cracks in her lower back. Healing vibes to Jess from all of us in the riding community.

steezysam (Sep 23, 2021 at 13:34)
@THEBIKEFIX: thanks for letting us know. That was the worst part of the weekend in Snowshoe for sure

THEBIKEFIX (Sep 23, 2021 at 20:33)
@ridebikesyall: Yes Jess in hospital at Roanoke, Virginia. Having final surgery on her collarbone today & should be ok to return to New Zealand in a week or so. A huge thank you to all the wonderful medical staff that have helped her during this time. Also thank you to the incredible number of people in the bike community who have sent messages of support for Jess.

ridebikesyall (Sep 24, 2021 at 9:13)
@THEBIKEFIX: thanks for the update! Wishing her well from afar. Can't wait to see her back to shredding after recovery!

JohanG (Sep 22, 2021 at 19:45)
The sport wants more women because women control the majority of consumer spending. That's all there is to it. You can ignore all of the cheerleading, appeals to value, and appeals to justice.

FrothDog (Sep 22, 2021 at 19:57)
@JohanG we can always count on the one token misogynist to come out of hiding on a PB post about women. Thanks for revealing yourself, now kindly return to your cave.

JohanG (Sep 22, 2021 at 20:20) (Below Threshold)
@FrothDog: You have to rely on namecalling because your mind is unable to counter the facts of my assertions. In this way you only debase yourself with your childishness.

JohanG (Sep 22, 2021 at 21:15) (Below Threshold)
@mtshakira: Here we have a for-profit company writing an article that discriminates directly along gender lines. It isn't hard to connect the dots.

djm35 (Sep 22, 2021 at 23:49)
Really? How do you figure this in male dominated sports? Are you saying men's wives and girlfriends control their spending or are you talking about all consumer spending and that women genrally spend more?

JohanG (Sep 23, 2021 at 9:00) (Below Threshold)
@djm35: All consumer spending, in a general sense. But now that you mention it, I do recall a lot of my riding buddies making jokes about whether they would be allowed to buy this or that. I also object to the term "male dominated" since there is no masculine group making controlling judgements; just because a group happens to be made up of mostly one gender, in a purely organic fashion, does not bring coercion or dominance into the picture. I think this verbiage is popular to use to spin the situation into this or that, but it doesn't hold up to scrutiny.

justttt-meh (Sep 23, 2021 at 19:41)
@JohanG: take some time to think about this comment, really. You believe that the disparity in men vs women in the sport is purely organic? As in - there are no outside factors affecting this? You can't think of even one possible thing? It's not hard to connect the dots man, and let me tell you... there are more than a few.

djm35 (Sep 23, 2021 at 23:54)
@JohanG: What about the advertising that is directed, predominately at men? What about the manufacturing that sizes bikes more for men than women? What about the apparent "bro culture" that most adrenaline fuelled sports seem to have that puts many women off even thinking about trying them? I wouldn't call all these factors organic, but then it is a word that is used to spin the situation into this or that, but it doesn't hold up to scrutiny.

JohanG (Sep 24, 2021 at 7:08)
The industry has already found out that there’s no statistical difference between women and men’s limb lengths. There's no measurement which is different between men and women that affects bike fit.

As for the rest of your assertions, well, they're about as well researched as the bike sizes one. Mountain biking is a dirty, smelly, messy, high risk, high technology, high fitness, high time investment, moderate cost sport that keeps away a significant proportion of men.

sarahmoore Mod (Sep 22, 2021 at 14:08)
Dark Horse was a women's only event. I think you're thinking of Audi Nines where Robin Goomes earned the Ruler of the Week title among the women's field and Daniel Ruso won it in the men's field.

BMXrad (Sep 23, 2021 at 1:49)
@sarahmoore: Ah yes I believe your right my bad thanks for correcting me, I only know as I was riding with a couple of pro lads that were there and they were saying how wrong it was that a man was the best woman. I run a bike park and we see loads of women and girls its just brilliant to see.