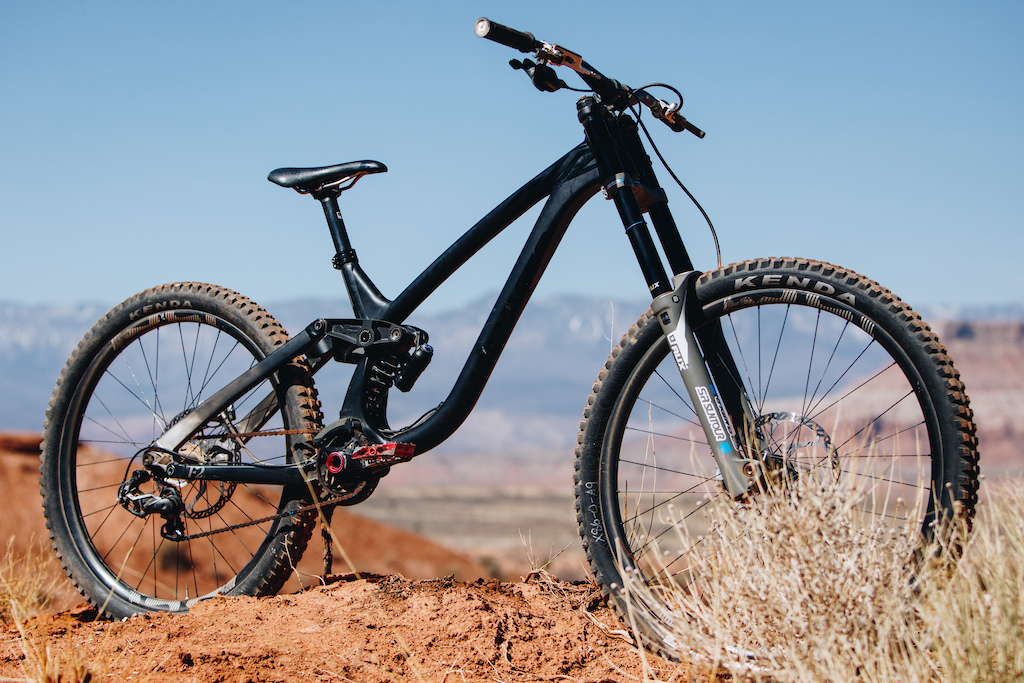 What was formerly Polygon UR announced a new frame sponsor at the start of the year, becoming NS Bikes UR for 2021. Australian Mick Hannah has raced 110 World Cups over a 20 year period, the majority of which were for UR Team. Here is his new NS Fuzz downhill bike.
Mick Hannah
Location: Buena Vista, Colorado
Age: 37
Height: 178cm / 5'10"
Weight: 88kg / 194 lbs
Instagram: @sickmick83

Mick, who is 178cm, rides a size large 29er frame. The frame is made of 6061-T6/ 6066-T6 aluminium and uses a one piece rocker with a four-bar Horst link with a floating shock design. You may notice, however, that he runs a mixed-wheeled setup with a 27.5 in the rear. The rear travel is somewhere in the region of 190mm.

Due to a lack of availability, the bike uses a 27.5 fork. However, Jon Stout, Mick's long-time mechanic and friend, feels there could be benefits to this setup and the low axle to crown that it yields. You can also note the low stem height.

The bike is awash with E13, Trickstuff, Kenda, ODI, Smanie, TRP and Promax. I understand from Stout that the setup is yet to be 100% finalized as the team is still to receive some updated parts for the new season as well as undergoing testing.

Coming from the Polygon Xquare One, it's a very different bike, and is much more conventional looking. The chainstays on the NS are 15mm longer and the reach, in the middle setting which Mick uses, is 22mm longer at 472mm. There is 8mm of adjustment either way on the Fuzz. 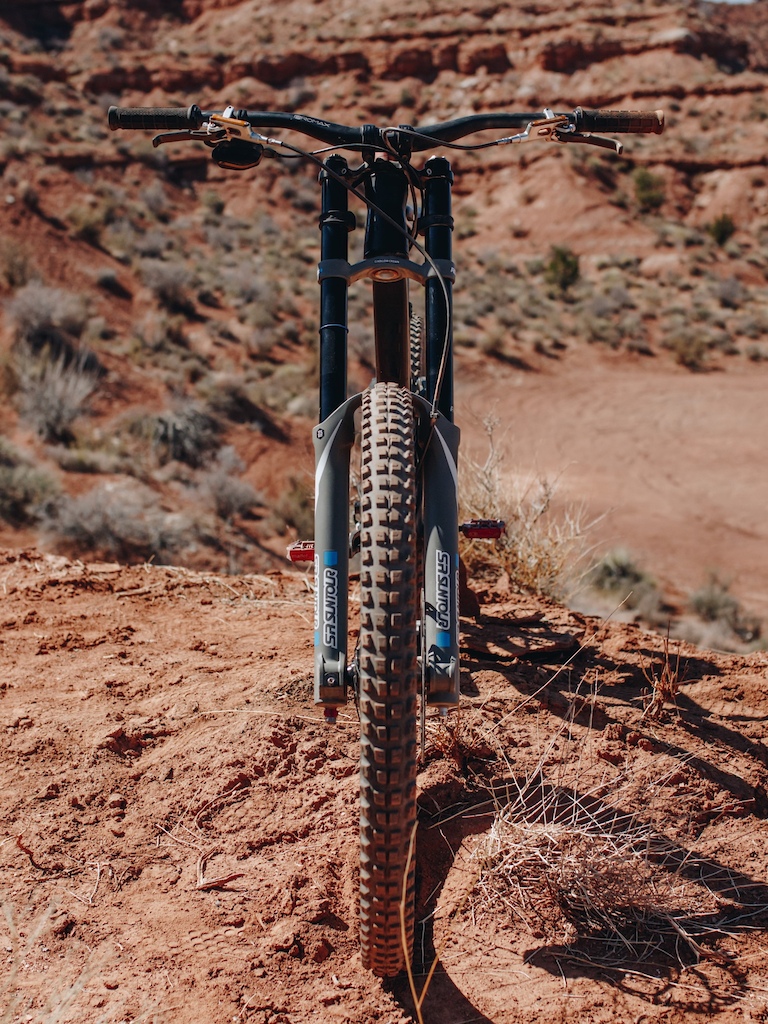 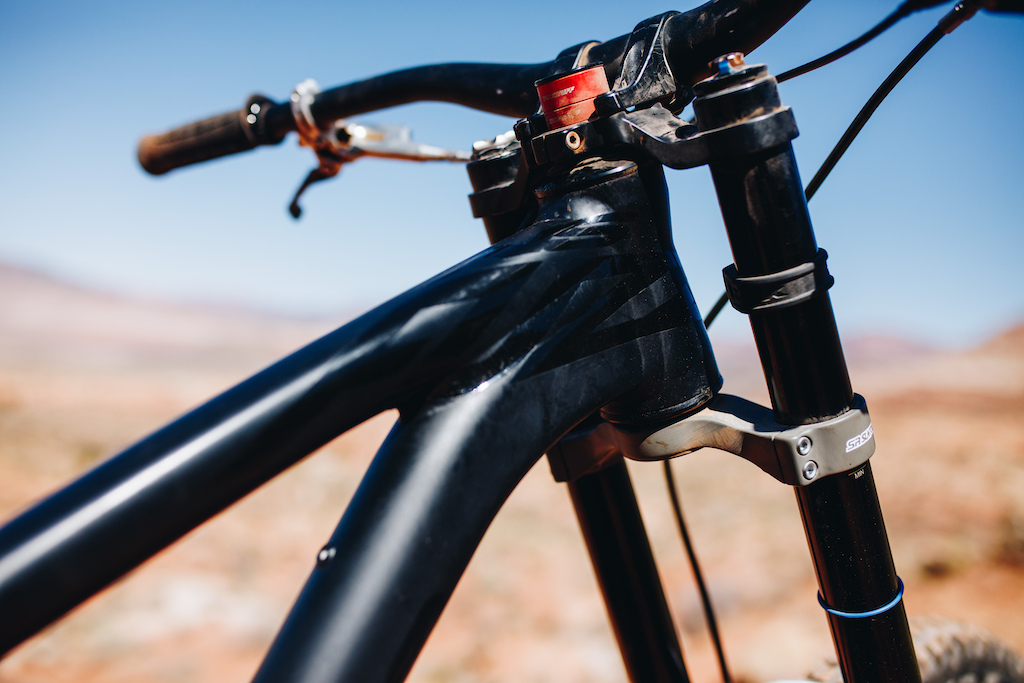 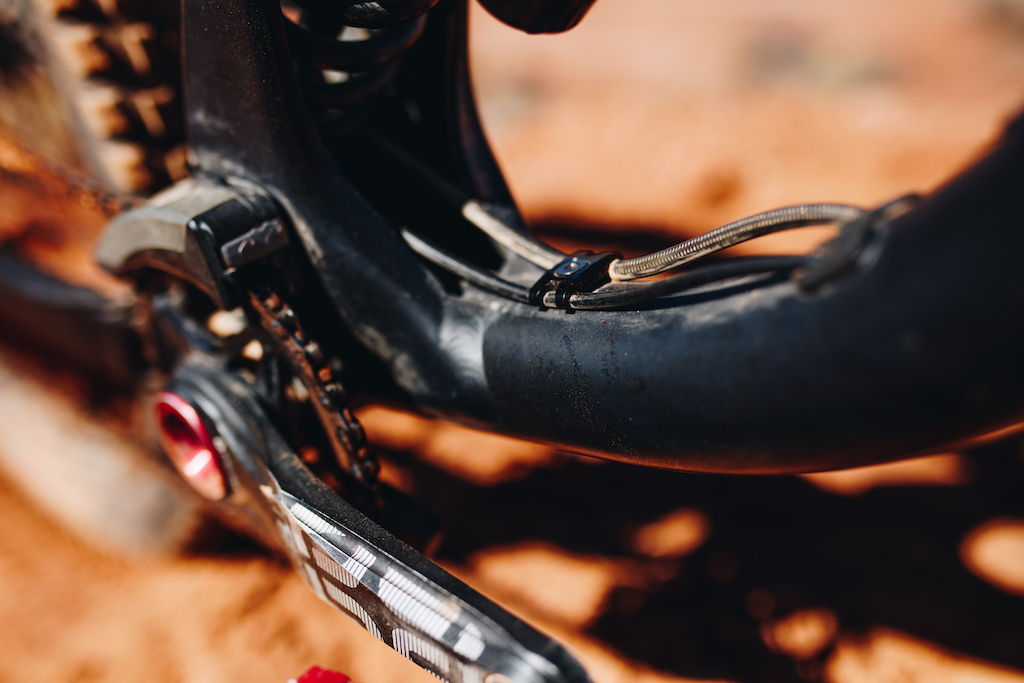 The height of your controls is personal preference and Mick not only utilises the full adjustment on the steerer but also uses a 27.5 fork; semi-internal cable routing on the Fuzz. 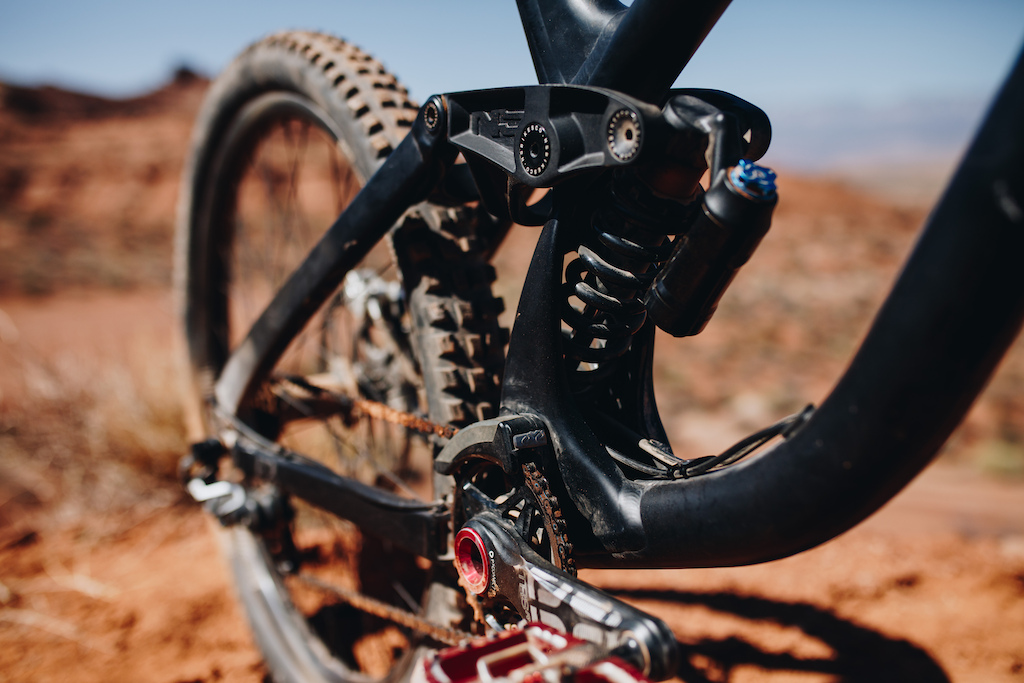 Suntour Voro is used with a SAR 450lb spring. 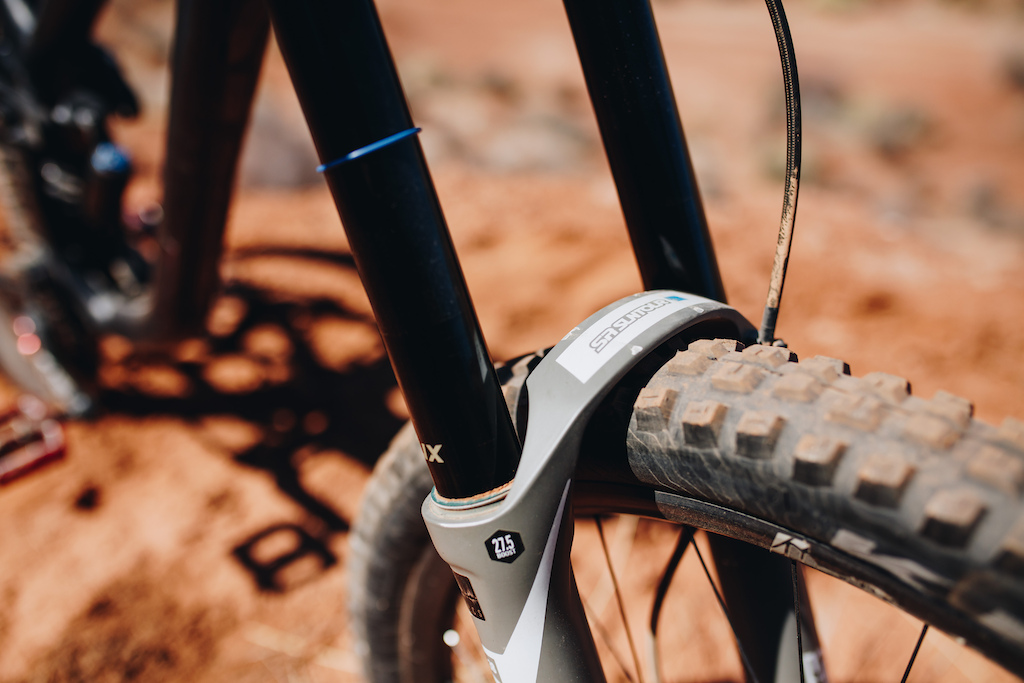 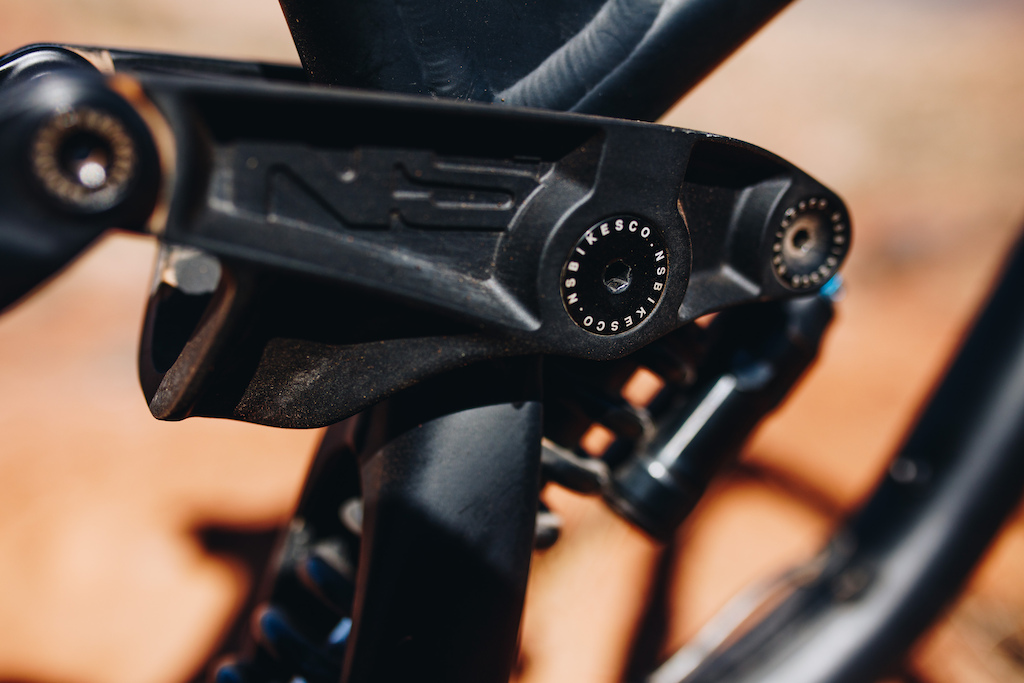 A trunnion mountain shock is driven by a one-piece alloy rocker. 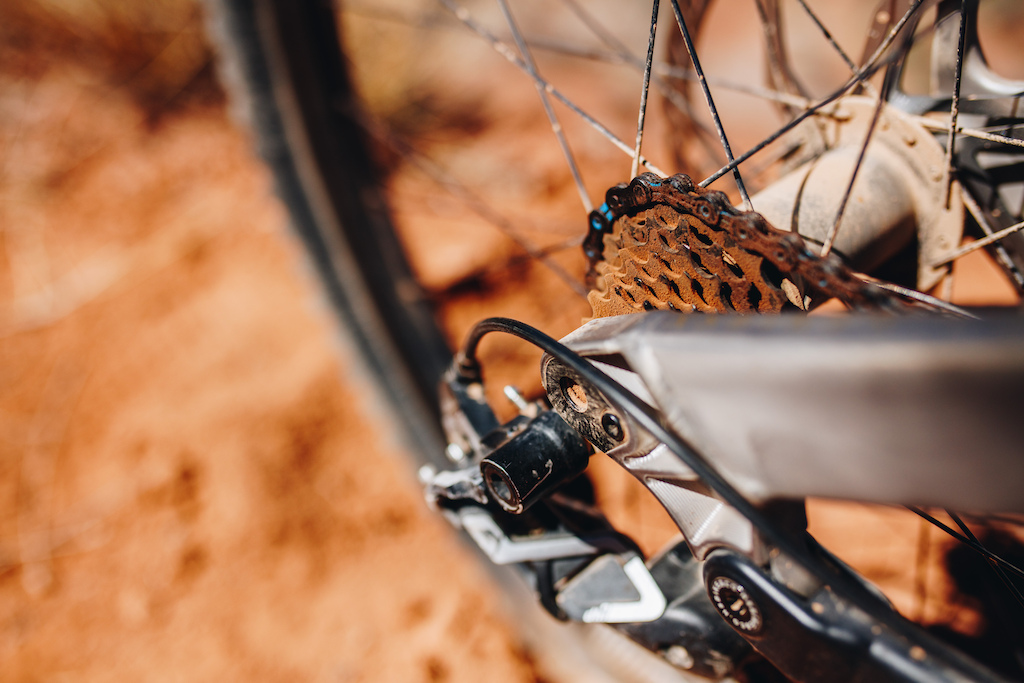 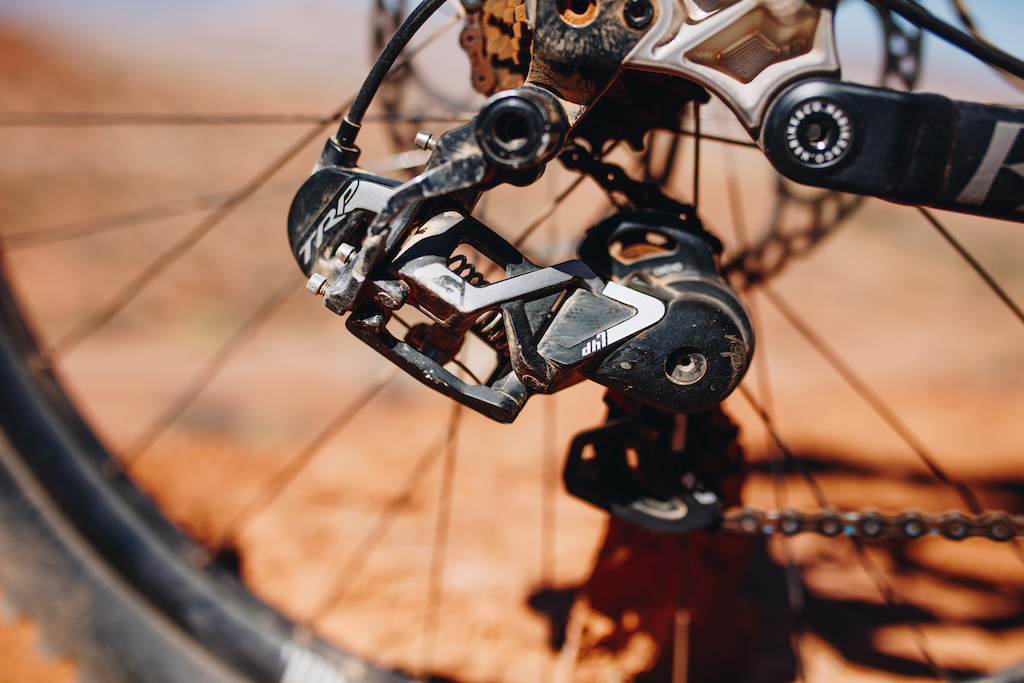 A TRP 7 speed drivetrain is a relatively new addition for the team. Mick runs a particularly tight spread of gears with a 10-20T integrated E13 cassette, as opposed to the stock 9-21T. 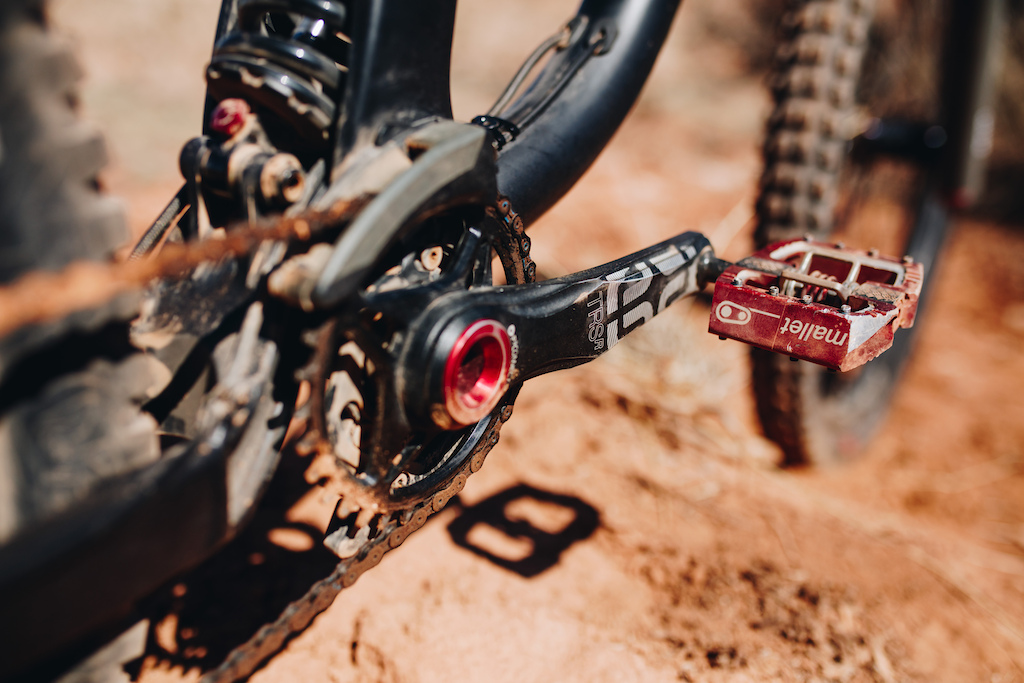 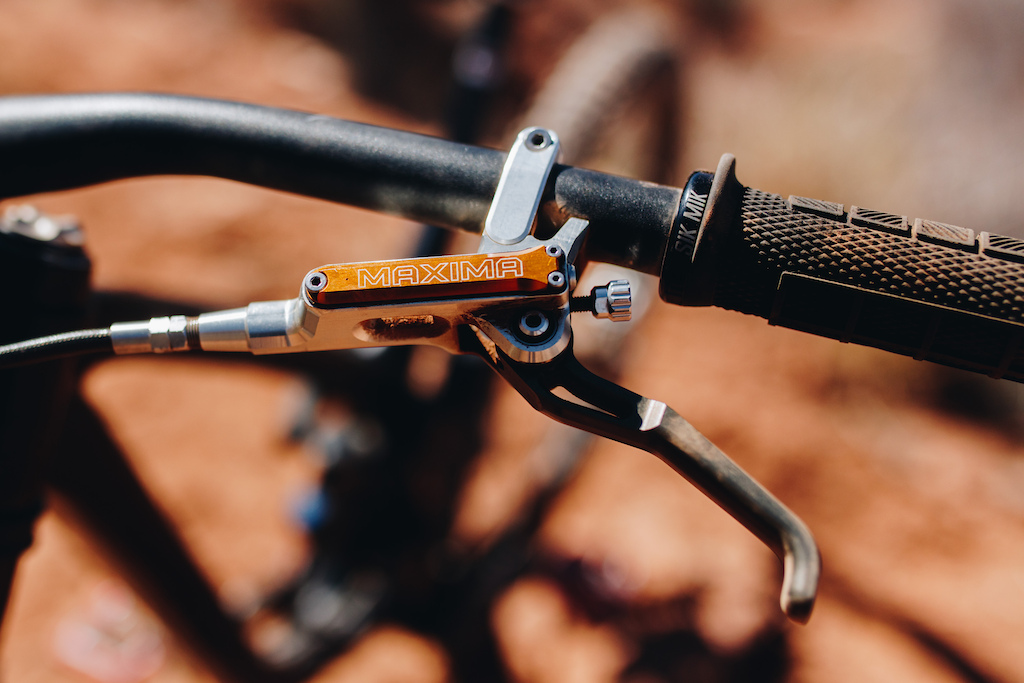 The Maxima offers even more power compared to its predecessor the Direttissima. "Direttissima" is an Italian climbing term to describe the steepest fall line of a mountain and was sometimes hard to remember. Maxima, however, leaves no doubt to the brake's intentions. 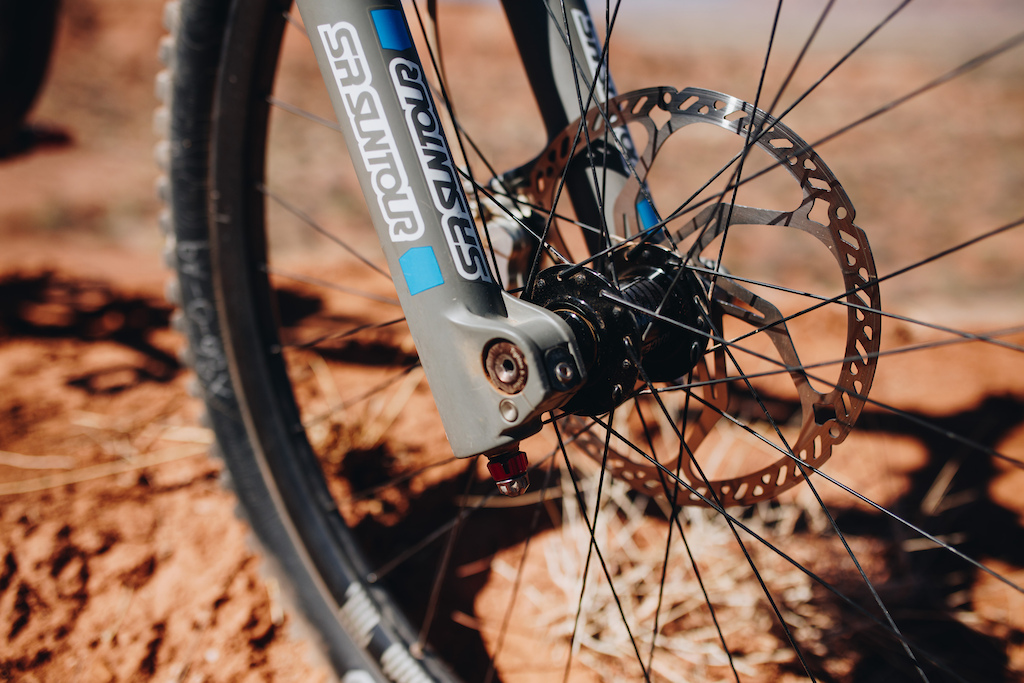 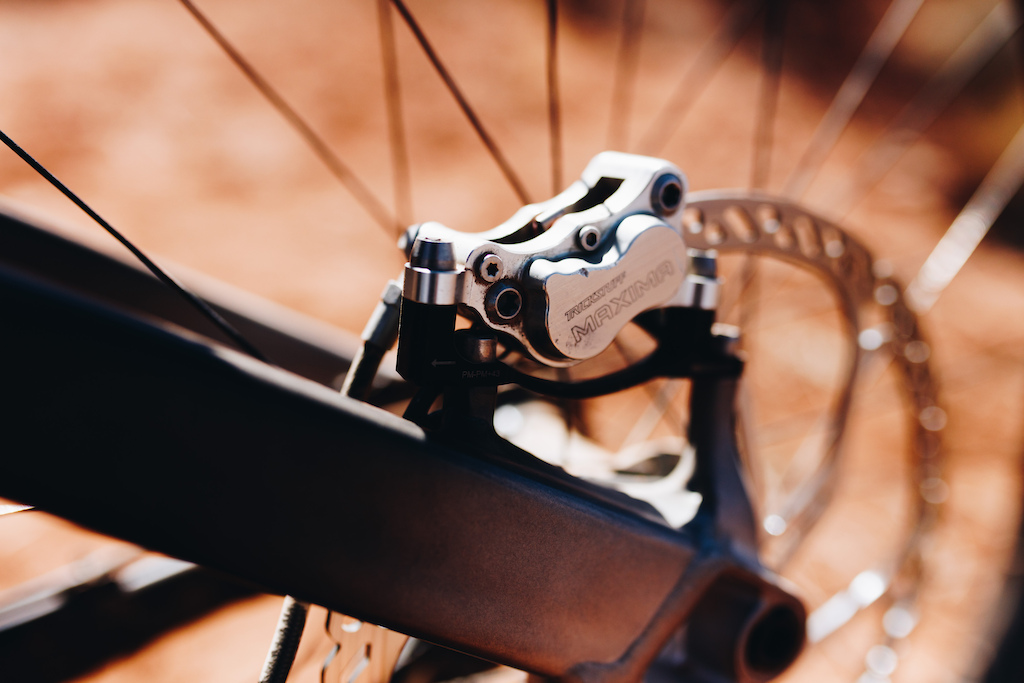 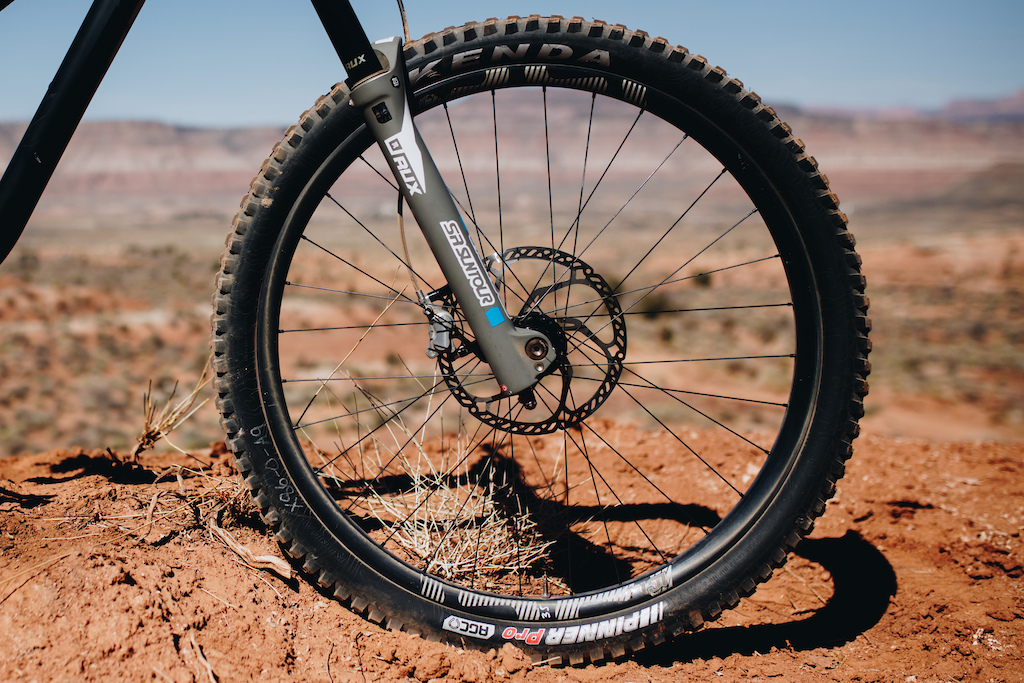 Both wheel models are the E13 LG1R DH, albeit in different sizes. 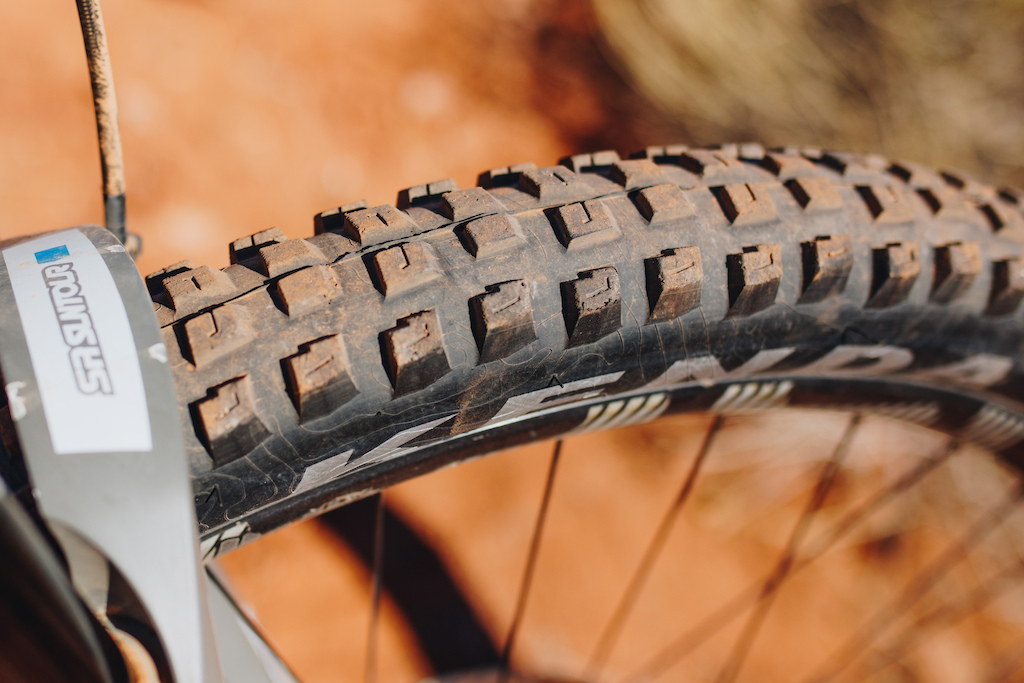 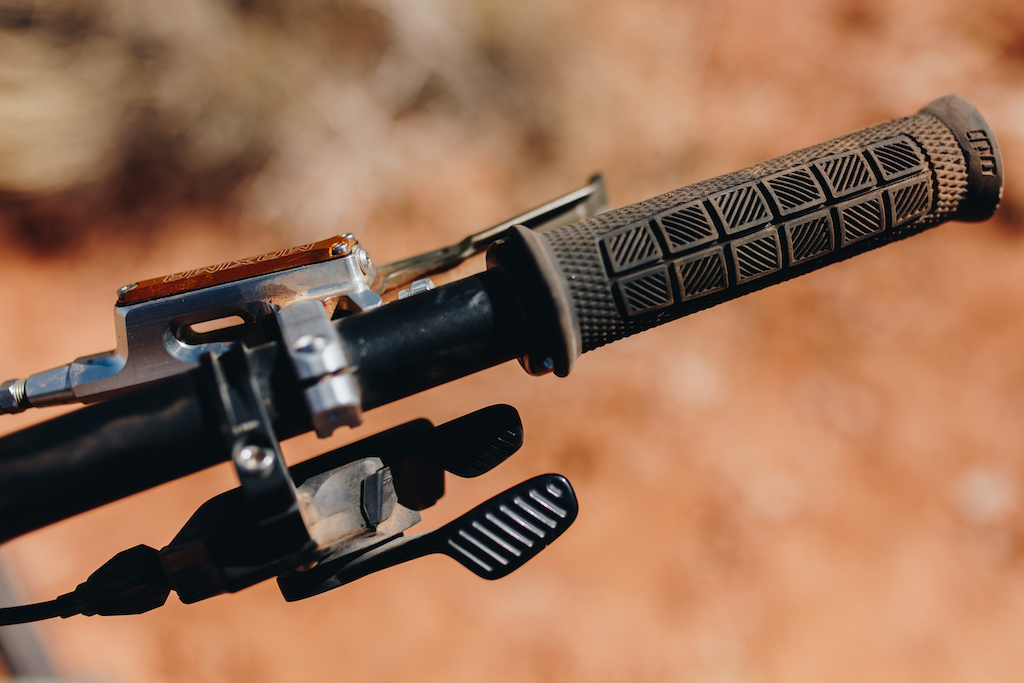 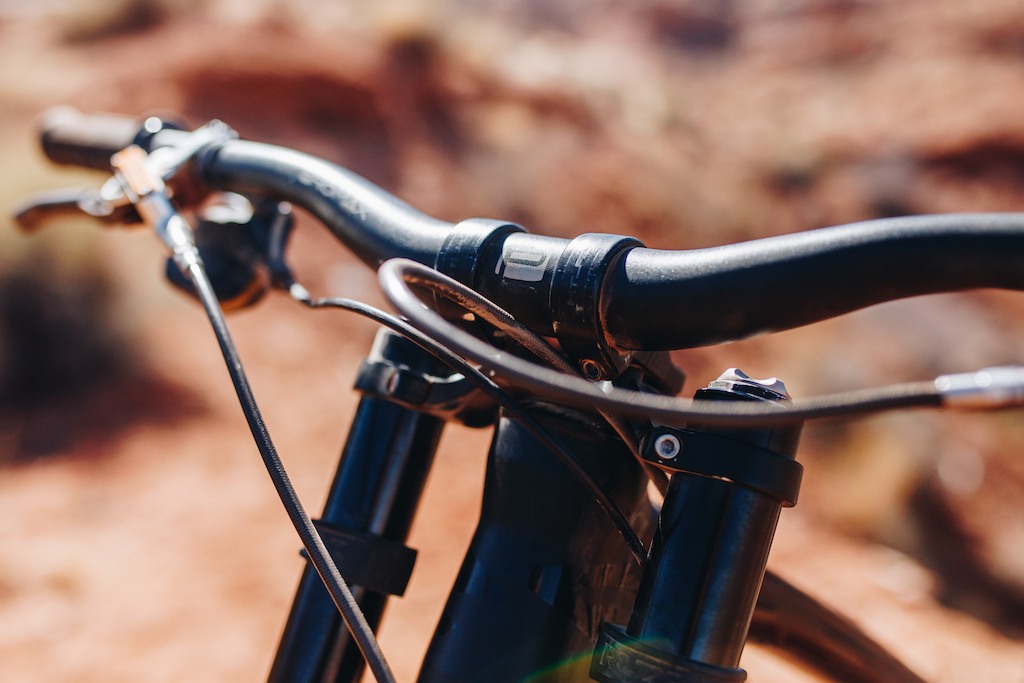 780mm Promax R30 bars are used with a subtly branded 50mm Raceface stem. Promax have their own DH stems in the works. 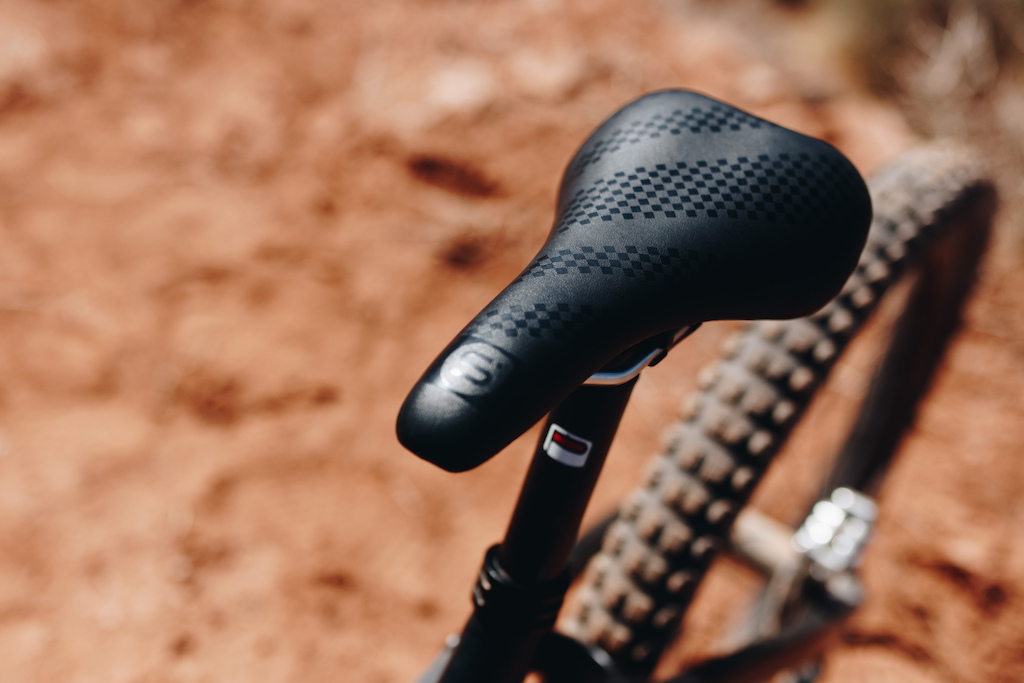 A Smanie DH saddle atop a Promax SP926 carbon seatpost.

1. Geo does not matter
2. NS got the geo totally wrong
3. All this cancels out
4. Sick Mick is so sick that good geo is basically optional

endoplasmicreticulum (May 18, 2021 at 1:17)
The fork looses 20mm of stack height and the rear wheel looses 19mm of its radius. He basically just lowered the bb by 20mm. I think its kinda cool that the Rux can fit a 29 inch wheel. If the downtube allows it, you can make your bike into a mullet while preserving its original geometry and not spend 1500€. You just need a new rim, spokes and tyre.

Krzymndyd (May 18, 2021 at 2:07)
Geometry is basically a guide line. Try different stuff you might find something you like that the bike companies have not made it fashionable yet. I love putting my DH fork and dh wheels on my 160mm bike.

Kieranf (May 18, 2021 at 3:16)
A while back I was messing around with different shock strokes and wheel sizes on one of my bikes, everyone told me it was going to completely mess the geo/suspension/ whatever up. All combinations worked great. Decent geo isn’t that precise.

Mick will be running his setup pretty firm too. Just checked, the setup guide for a Rux says 70-80psi for his weight and he has 88psi. So his BB height at sag is probably a fair bit higher (20mm?!) than a normal rider anyway.

Sounds like Option 3 and Option 4 have it. Let’s hope he can avoid the mud.

urteam (May 18, 2021 at 9:47)
Option 5:
At the back the bike has a different swing-arm which brings up the BB higher and get the good head angle.
At the front there is enough option with fork stanchion height and stem / handlebar rise to get the right height.
and Voila you got yourself a sick mullet DH .

Also option 4 is always valid at any point in time ;-)

Also....Specialized needs to bring back the Big Hit. Waaay ahead of its time haha

justinfoil (May 18, 2021 at 7:03)
Someone asked in the comments on another story why everyone doesn't just make 29ers or mullets. This is the answer: bar-height (among other things) is super personal and some people don't want a front end in the sky. Pretty cool they could get it worked out on the DH bike, but not sure if that lowered BB would work out on a trail bike though, and considering all the mullet conversion linkages out there, pretty much everyone else doesn't think it works either.

danstonQ (May 18, 2021 at 4:05)
His case is not that bad for a 27.5 fork.
In my case, I'm less lucky: my SR Suntour 27,5 Auron (non boost), which I like very much, almost cannot accept the wonderful 2,50" Hutchinson Griffus I installed. The clearance of the arch only leaves 4 poor millimeters, which makes it unridable in mud, gravel and stony terrains.
A pity, cos this tyre's wonderful...

justinfoil (May 18, 2021 at 6:52)
'"Direttissima" is an Italian climbing term to describe the steepest fall line of a mountain and was sometimes hard to remember.'

Pretty sure it means " directly" or "direct route" in almost any context, not just climbing.

Hard to remember for who?

Are we still doing that (asks for a friend)?

LastAtLeast (May 18, 2021 at 6:09)
I also got a friend with a question: is it nowadays more accepted to mention that something does surprisingly not look like a session or to point out the usual sessionousness of something?

LastAtLeast (May 18, 2021 at 6:13)
I guess you can ride this in muddy conditions without a front brake - which would give it a cleaner look...but then there's the mud.

bunjiman82 (May 18, 2021 at 1:14)
I'm sure it's amazing but it looks totally boring in comparison to all the glamour bike shots of recent days on pinkbike...

poolboy1-0 (May 18, 2021 at 10:10)
HA. I had this same exact thought. The only thing I could think of would be the ride down from Mt. Antero, or maybe Brown's Creek? But it seems funny seeing those pictures of the bike in Utah, with BV called out.

VlajiciStrapec (May 18, 2021 at 6:55)
probably simplified DVO Jade chassis, same like new Suntour TriAir shock, which comes from Topaz shock... DVO stuff is made from Suntour