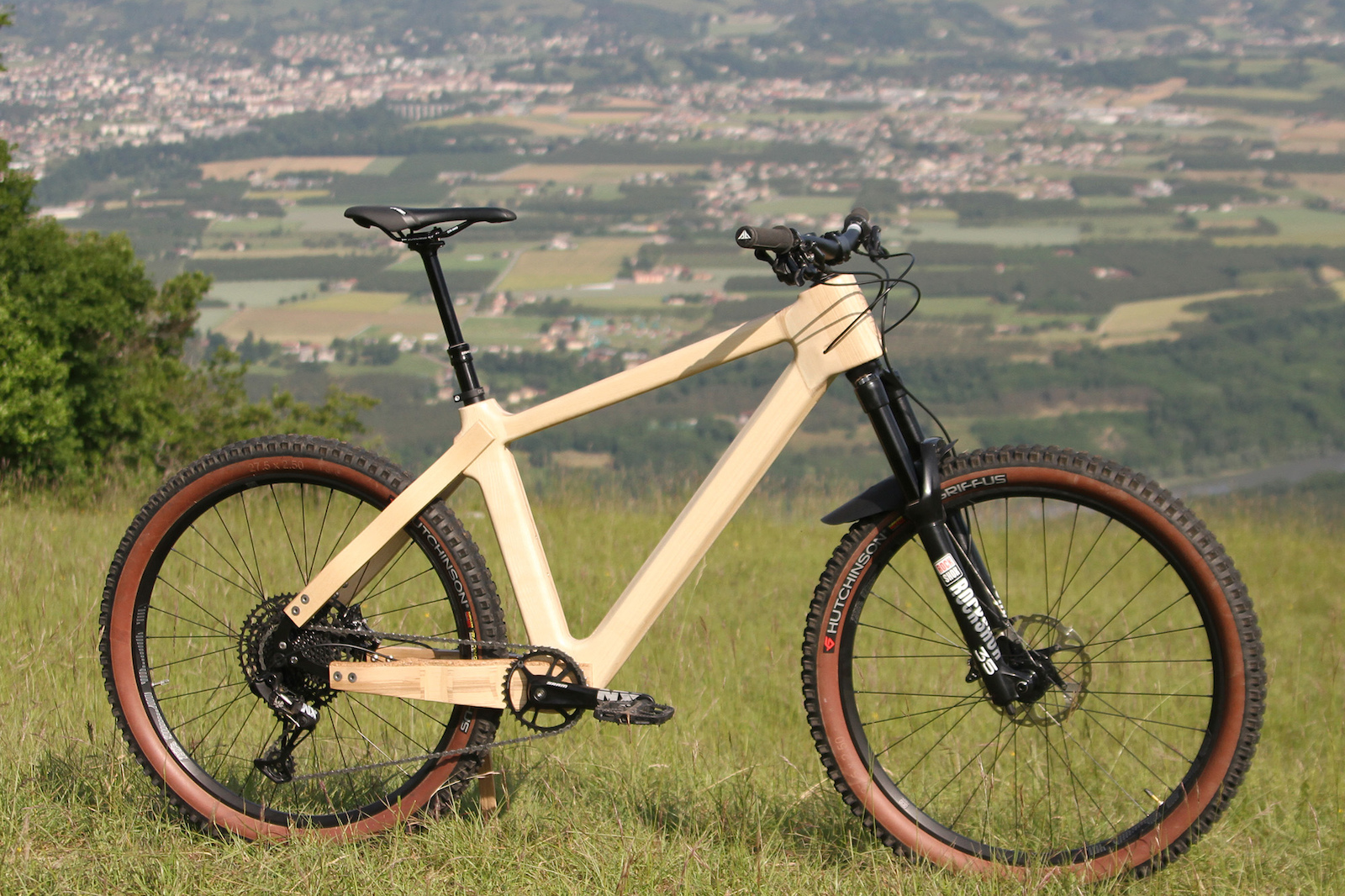 BIKE CHECK
Edouard Delbove's
Atelier Suji Trail 27.5
Photography by Edouard Delbove
Following on from the wonderfully wild plywood prototype of Bene Mack that we featured towards the end of last week, today we're taking a closer look at another of the wooden builds highlighted by the European Bike Project. This 150mm travel hardtail is the creation of Edouard Delbove who makes skateboards under the name Atelier Suji (Suji Workshop). This isn't Edouard's first attempt at creating a bike, as his final project in his woodworking qualification was a gravel bike that won a design contest. Since then, he has been working on a number of prototypes until he finally released the Trail 27.5, which may be the most sustainable MTB ever.

While most metal or carbon mountain bikes are produced from raw materials transported around the world and fabricated with processes that use varying amounts of fossil fuels, Edouard takes a different approach. He sources the ash wood from local, sustainably managed plantations, and then the bike is created using his own hands with the cleanest glues possible and finished with an eco-labeled varnish. 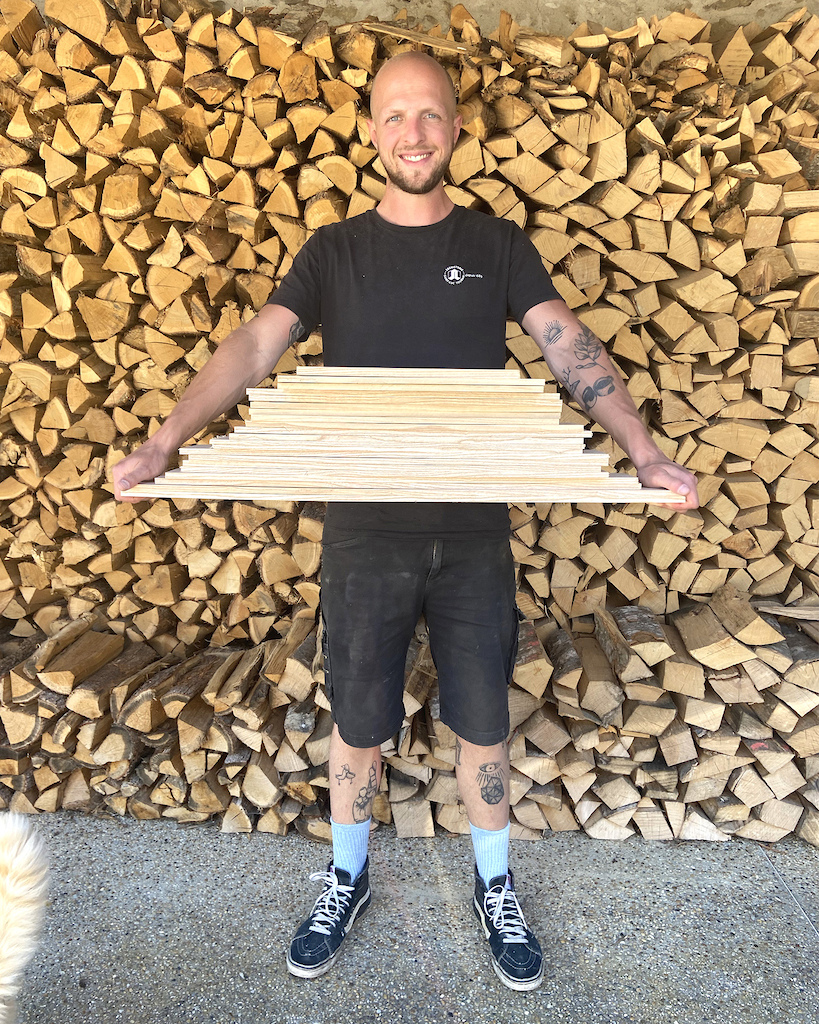 Edouard is a big fan of timber. He graduated in woodworking in 2017 and uses the material in his skateboard business based in Isere, France.
Let's get into all the details of this unique wooden hardtail. 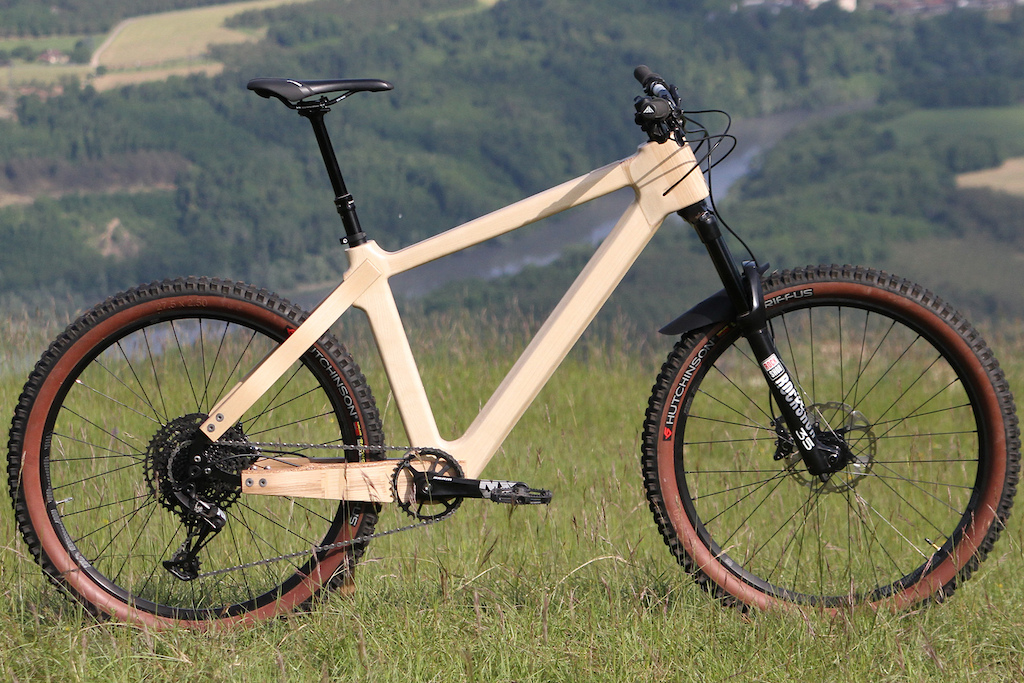 Details (size large)
Frame Material: Ash
Wheelsize: 27.5"
Rear travel: 140-150mm fork recommended
Head Tube Angle: 65°
Seat Tube Angle: 74°
Reach: 445mm
Weight: 4.8kg frame
Price: €2,680
More info: ateliersuji.fr
Edouard is a huge fan of wood and he believes using it as a frame building material for bicycles isn't even that out of the ordinary. He said, "In the olden days, everything was made of wood - car frames, carriage wheels, and sometimes even bicycle wheels and even today for tool handles. Wood is an incredible material, and has proven it for centuries." For the Trail 27.5 hardtail, Edouard used ash as it's a wood that can deform without breaking and absorbs vibrations. The biggest challenge is finding the right balance between strength and weight and Edouard has refined the joints and the direction of the grain over a number of prototypes to arrive at the final product. 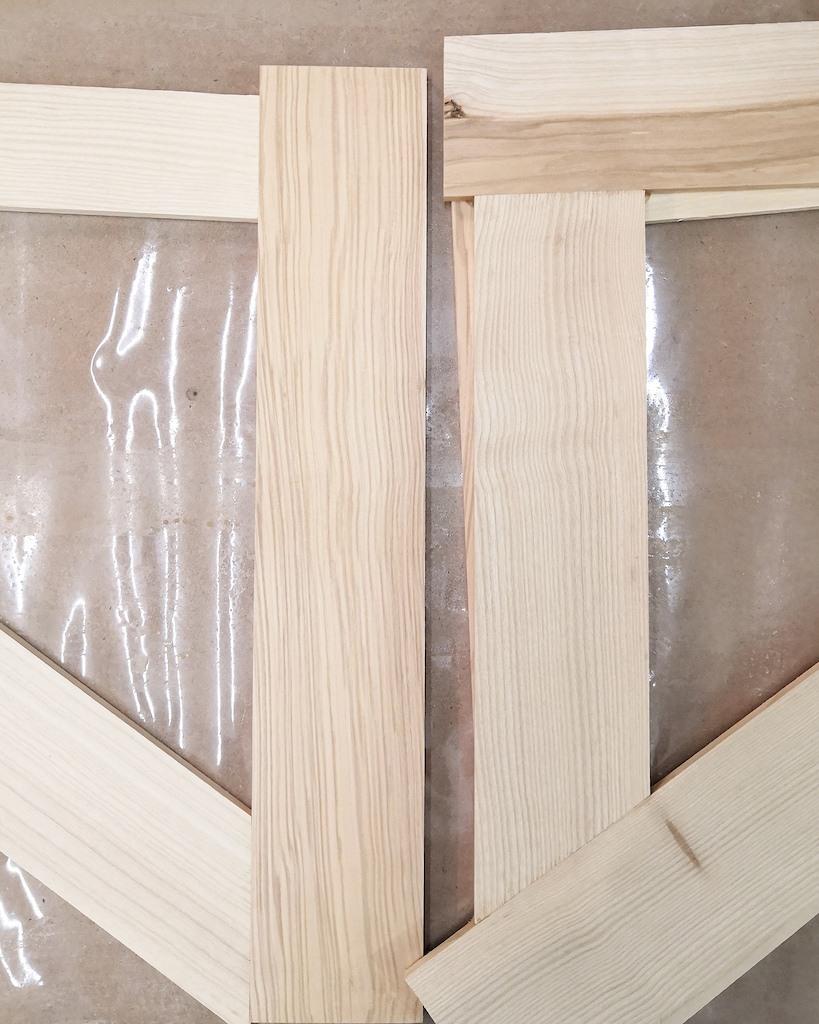 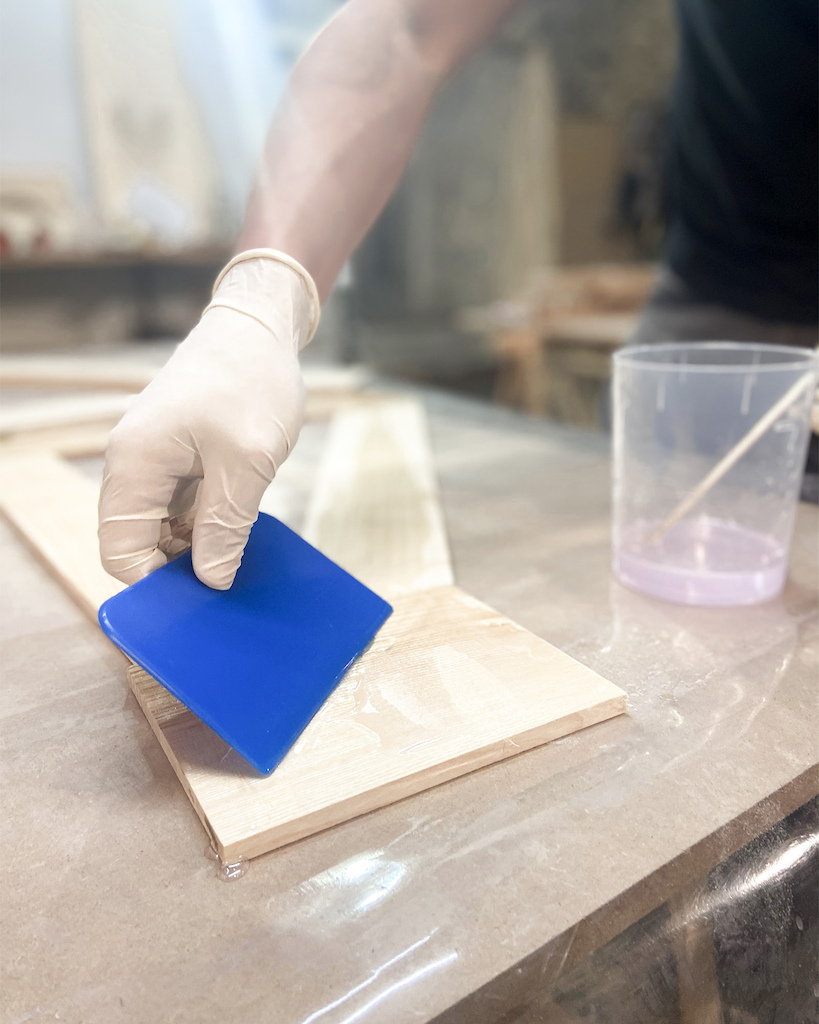 Edouard glues planks together using a bio epoxy that's made in Portugal then carves them to his desired shape. There are more than 20 gluing steps involved in each build so a frame takes around 3 weeks to complete. 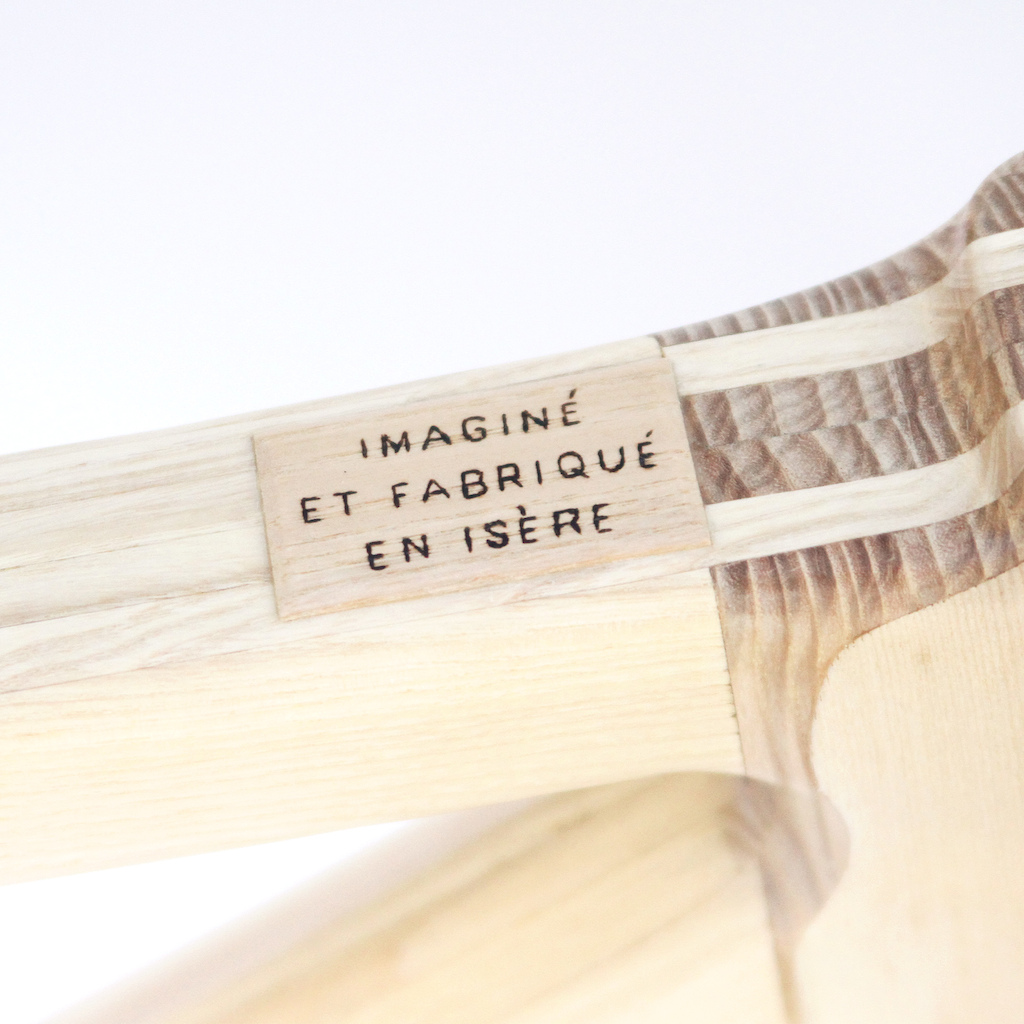 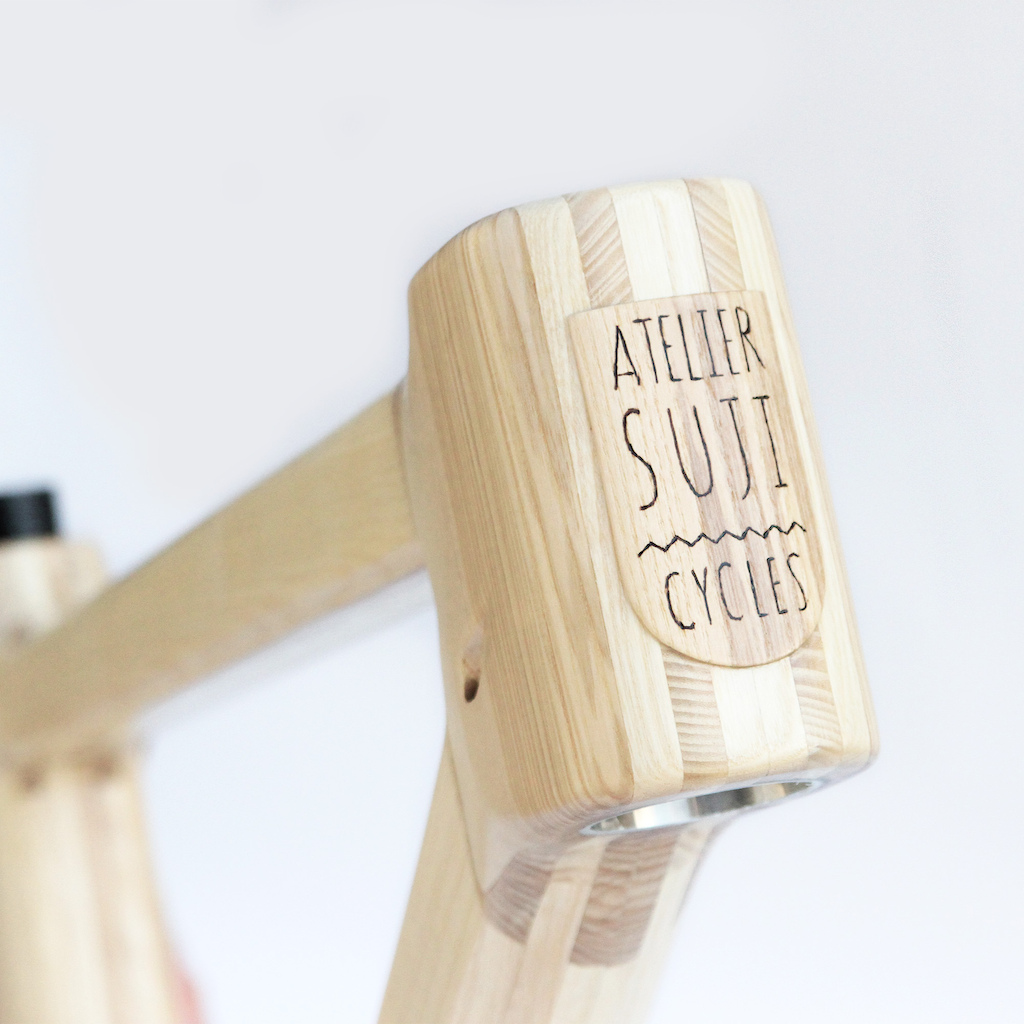 "Imagined and manufactured in Isere". These details are burned into the wood with a pyrography tool.
The bike is a 27.5" wheeled trail hardtail that is designed around a 140-150mm fork. It's a bike that's designed to be responsive and dynamic with a 65° head tube angle, 445mm reach and 74° seat tube angle. This bike is pitched at trail riders but Edouard is also currently working on a more hardcore version of the bike called the Drop that has more aggressive geometry and will be revealed in a few weeks. 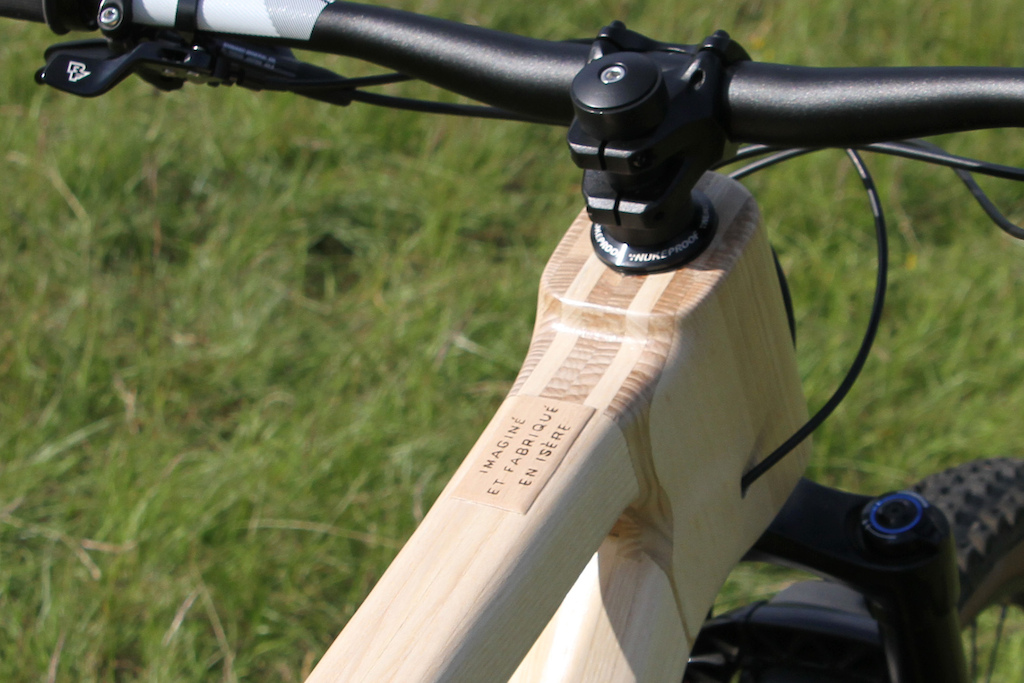 The headtube and dropouts are manufactured in England, but the rest of this bike is produced in Edouard's workshop. 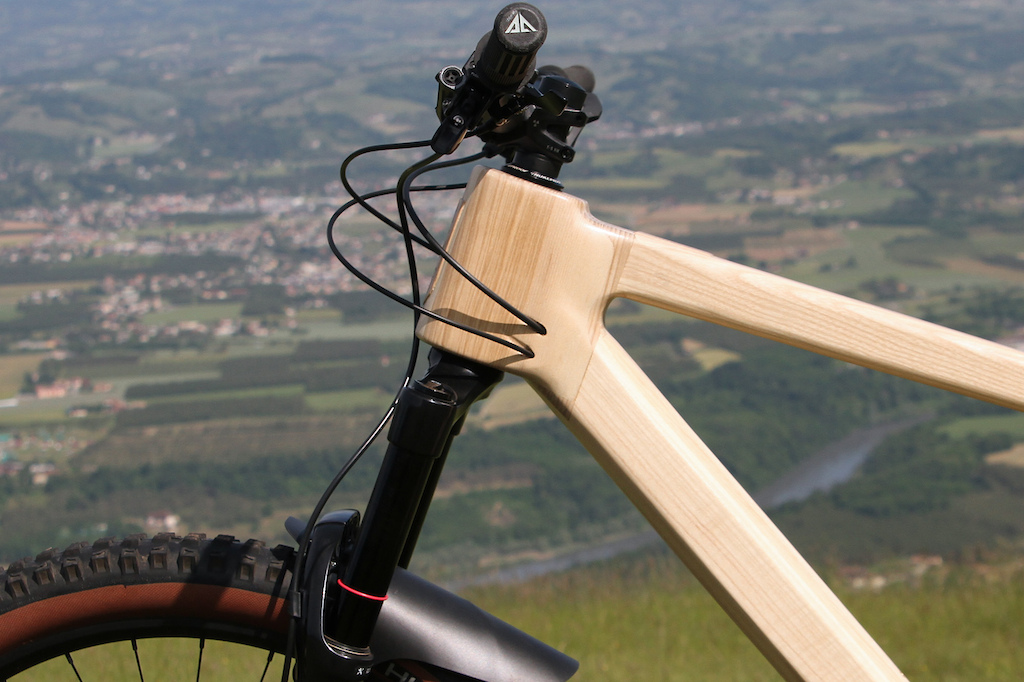 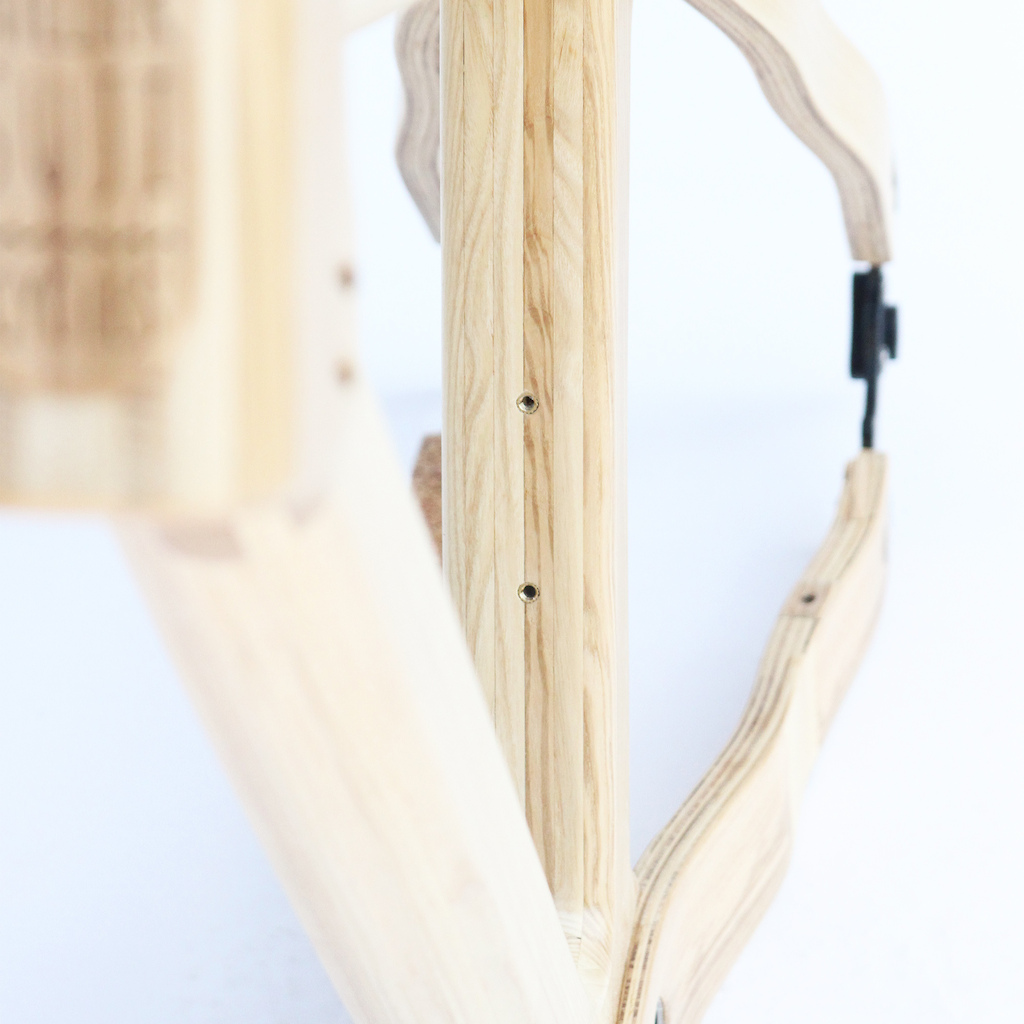 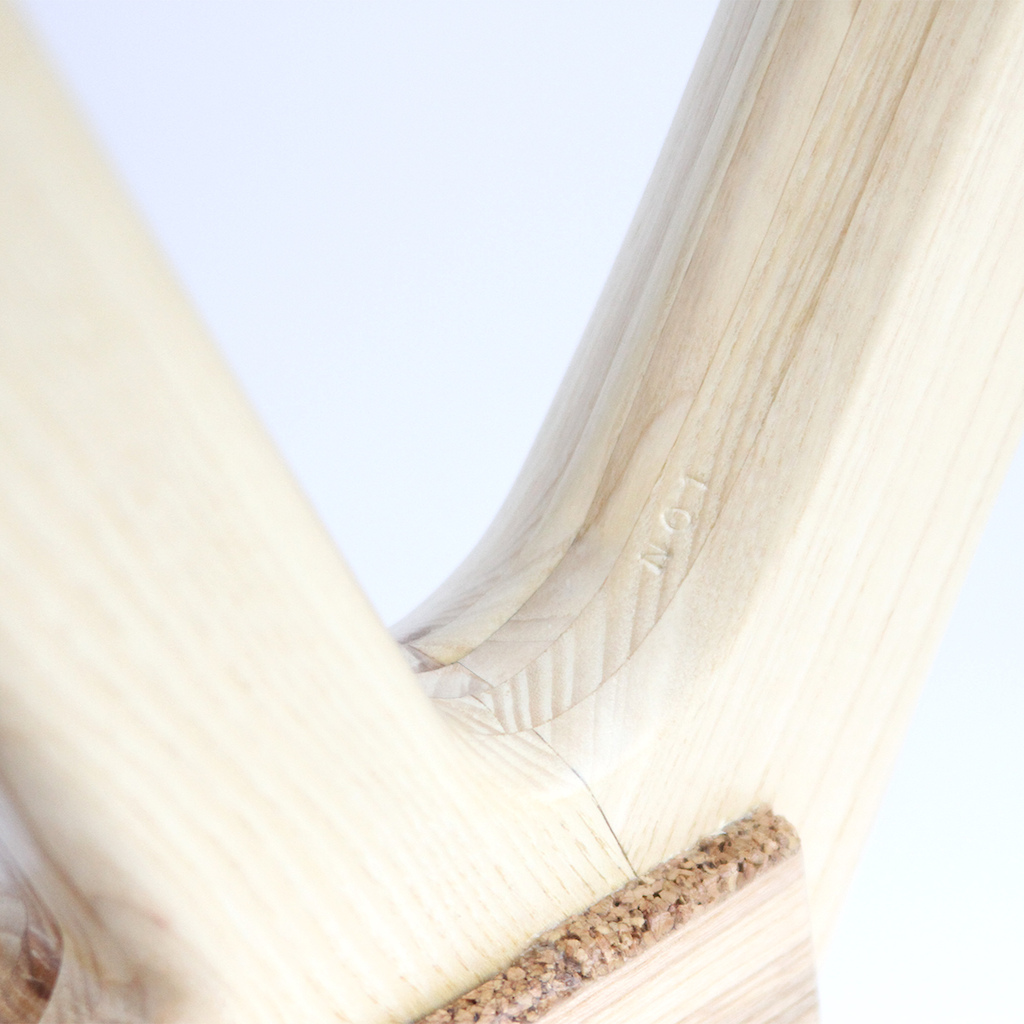 The bike can hold two 750ml water bottles and has a chainstay protector made from cork. Each frame is finished with a varnish to protect it from impacts and UV rays. 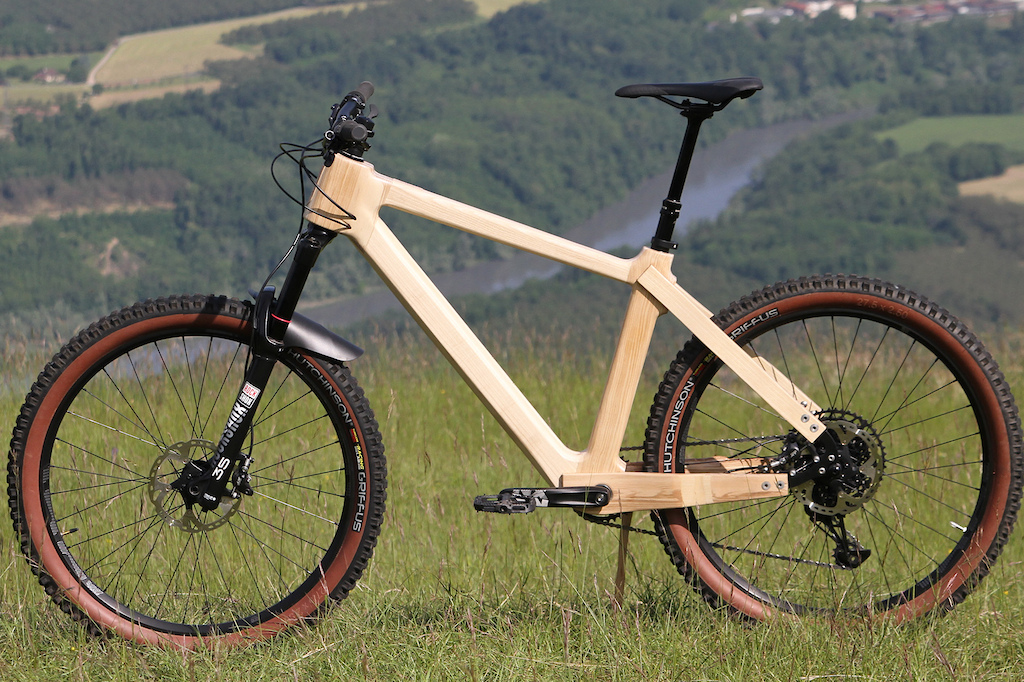 Alongside the enduro version of this bike, Edouard will be designing a snowboard and then a complete range of city bikes with a single speed, a ladies' and men's bike. For more information on his complete range, click here.

AckshunW (Jul 19, 2021 at 11:26)
Very nice craftsmanship, especially around the headtube area. Like fine furniture. Then the rear end of the bike looks a framing carpenter came to finish the job. I support the concept but needs more refinement!

essessareare (Jul 19, 2021 at 19:36)
Front is mid-week craftsmanship, rear is Friday afternoon after getting 4 pints deep at lunch.

AtelierSUJI (Jul 20, 2021 at 22:51)
Thanks for your feedback, I'll take it into consideration for the next wooden bike I'm making.
If you want to see the progress of the bike you can follow me on my account @ateliesuji.

FatTonyNJ (Jul 19, 2021 at 11:15)
The good thing is that, if it fails, you can recycle it into heat via bonfire. Not like that crappy Pole that needed to be melted down and made into beer cans....

SuperHighBeam (Jul 19, 2021 at 12:21) (Below Threshold)
ONly relevant if you live in a place where termites exist. They're not as prevalent or pervacious as you might think.

justinfoil (Jul 19, 2021 at 15:18)
I love handmade stuff, but also would really like to see how something like this holds up in some testing. I'm not in the camp that likes to say "the headtube is going to fold on the first hit!", but it would be nice to know what kind of forces this construction can take relative to a modern alloy or CFRP bike.

ghill28 (Jul 19, 2021 at 11:05)
So frame alignment that changes with temperature and humidity? What sort of marketing spin can we put on that?

RideThicccBC (Jul 19, 2021 at 13:24)
Guys it looks like a Session hidden behind a paywall, and I'm disappointed it wasn't interpretive dance format. Something about Reece Wilson flying planes and Darkfest did too much social media.

MattP76 (Jul 19, 2021 at 12:38)
@callumreynolds: I think you're wrong. Most people are more than happy with same size wheels. Mullets are a fad that will disappear over time. No matter how much people say they won't.

fudgedredd (Jul 19, 2021 at 12:44)
Reminds me of the Calfee bamboo MTBs or the now defunct Renovo (CNC routered frame). Love the wood handcrafted style of the headbadge. Wonder how that cork would hold up... Handmade is the best

pdxjeremy (Jul 20, 2021 at 11:52)
Actually it wood need to be a fixed gear, have some kind of streamers and a terrible seat for those naked bike rides

The paywall made me!
I am aNi mAl

dolmen (Jul 20, 2021 at 5:18)
Love the concept but dread the day I'll have to fend off hordes of hungry beavers nibbling at my bike

pikebait2013 (Jul 20, 2021 at 12:59)
The best part about all these wooden bikes is if they break out in the trail leaving you stranded, at least you have some firewood.

Brazinsteel (Jul 20, 2021 at 18:32)
Or just carve up some wood laying around and make some parts that break. Carry some wood carving tools is all.

overmyhead (Jul 20, 2021 at 13:41)
Very impressive, but I'm surprised his first version wasn't a city/hybrid bike rather than a trail bike, with all the forces it could be subjected to.

AtelierSUJI (Jul 20, 2021 at 23:03)
Thanks for your comment.
The first wooden bike I made is a gravel bike, I studied the forces submitted on the frame to reinforce the frame in some parts. A city bike and a trail bike will not require the same reinforcement zones and not in the same proportion.
If you want to follow the process of building a wood bike I add pictures on my instagram page @ateliersuji

kobold (Jul 19, 2021 at 11:05)
I like the concept but how hard can you ride it? The fork probably allows you shred hard. Maybe full rigid wood wood be better? IDK

kleinblake (Jul 19, 2021 at 11:17)
Wood has similar fatigue properties to steel, meaning it will never fatigue to failure the way carbon and aluminum do

kleinblake (Jul 20, 2021 at 14:29)
@bicyclelifestyle: for sure, but assuming a bear minimum amount of testing then it shouldn’t be hard to make this safe to ride

AtelierSUJI (Jul 20, 2021 at 23:06)
Thank you for your comment, the collages bring precisely more resistance than a single piece of solid wood.
The head tube part is one of the most reinforced parts.
You can trust me, you can go on the trails with this bike and everything will be fine.
If you want to follow the process of building a wood bike I add pictures on my instagram page @ateliersuji

bicyclelifestyle (Jul 20, 2021 at 23:16)
@kleinblake: the bear minimum could be a grizzly situation. Things could get hairy, I would still give paws to this bike before trying to send it like an enduro bike.

RBalicious (Jul 19, 2021 at 11:05)
As beautiful as this bike is. It's hard to consider this as sustainable. The Ash tree's existence is very threatened by the Emerald Ash borer, can't say this is a very sustainable build, as seen in the decimation of the Ash tree in N. America.

jamesbrant (Jul 19, 2021 at 11:24)
was wondering that myself, but unless you know his source of ash, you can't really say that with certainty. i doubt he's sourcing from the US. ash is amazing wood though and makes the best canoe paddles, but i don't think you can even get them anymore where they used to be the norm.

RBalicious (Jul 19, 2021 at 11:53)
@jamesbrant: agreed, however transportation of wood & wood products to foreign lands from its native region is what has led to the expansion of insects/disease to forests the world over. I see it all the time, people also transporting fire wood from their home town to a different area. People can down vote me all they want, no different than sticking your head in the sand like an ostrich...

fudgedredd (Jul 19, 2021 at 12:41)
Depends on the wood source. If it's sustainably farmed versus hunted down in the wild like an injured wolf.
Also you'd need to do a LCA (lifecycle analysis) to compare all levels of energy and resource usage, etc. (transportation, labor, recyclablilty, negative impacts in landfill (compared to non-wood bike frame). Carbon is terrible on many levels.

KFiskerC75 (Jul 20, 2021 at 1:25)
He states on his website that: "The frame is made of ash from eco-managed forests in the Rhône-Alpes region". Also he uses eco epoxy made in Portugal, and the steel components are made in the UK. All in all, it looks very sustainable, both in terms of materials sourcing and logistics carbon footprint...

DDoc (Jul 20, 2021 at 12:46)
Its green from the perspective that these trees are dying and there is nothing we can do about it, so you might as well use the dead wood for something worthwhile.

RBalicious (Jul 20, 2021 at 12:53)
@DDoc: I wholly agree with utilization, as long as the wood has been treated in a manner that prevents the spread of insects & disease. That is my main point. Just like watching the lodgepole pine forests of the Rockies & Canadian Rockies get decimated by the Mountain Pine Beetle, but that has more to do with a changing climate than transporting of forest products to other regions (although studies have shown, it was a contributing factor).

NewmarketMTB (Jul 20, 2021 at 2:54)
Interesting bike, bamboo has been done, this looks nicer though. Got any old pallets?

stubestrong (Jul 21, 2021 at 2:58)
I’m looking forward to the PB deep dive article on which wood for which discipline the pros & cons

jwdenver (Jul 19, 2021 at 11:33)
What a bunch of terrible comments. The Outside paywall can't come soon enough. Awesome bike Edouard! Love the head tube.