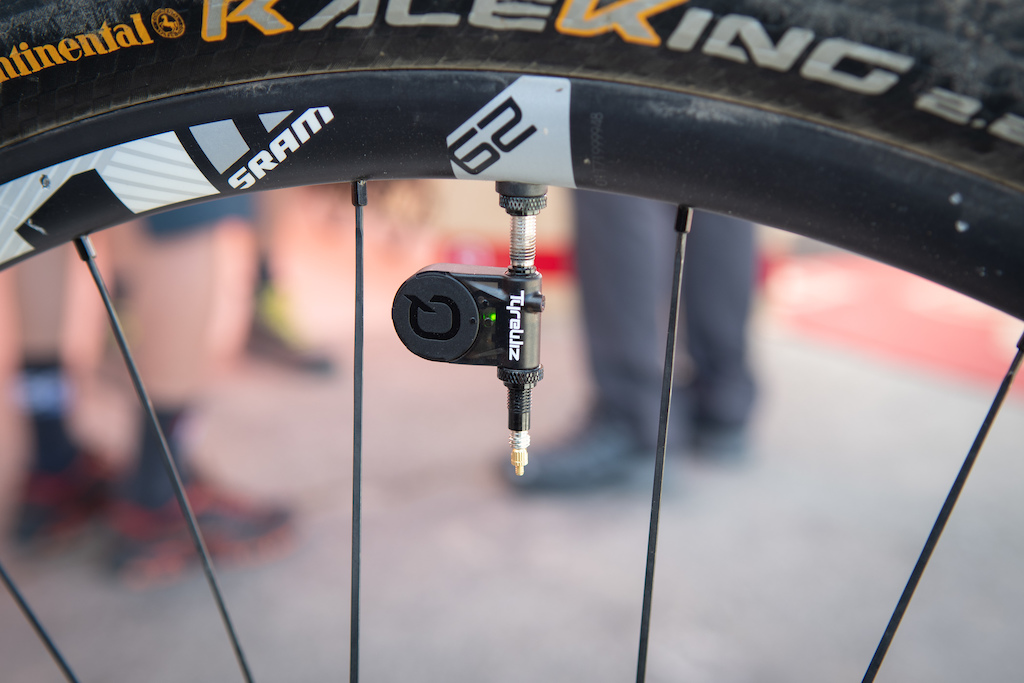 You're part way through a ride when a small icon begins blinking on your cycling computer. You take a closer look, and realize that the alert is regarding your tire pressure – it's dropped below the minimum acceptable level, allowing you to pull over and take care of the leak before it gets too severe. Not too long ago that would have seemed like a something from a sci-fi movie, but with Quarq's new TyreWiz it's an entirely feasible scenario.

The small device threads into a removable valve core Presta valve, in either a tube or tubeless setup, and then monitors tire pressure every second. That information is sent via Bluetooth or ANT+ to a phone or computer, where riders can see their current tire pressure, and set up alerts if the pressure becomes too high or low (there are also LED lights on the unit that indicate if the pressure is within the specified range). Quarq say the device has a +/-2% level of accuracy, and it will measure tire pressure down to the tenth of a pound. 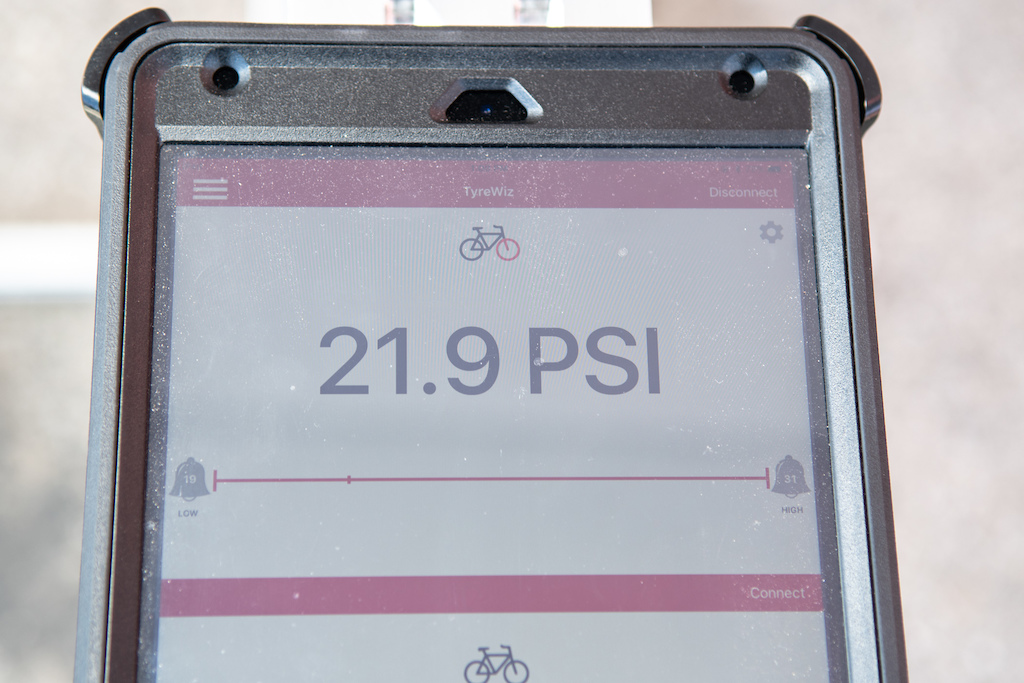 The TyreWiz transmits its data to either a computer or a phone, and alerts can be set to indicate if the pressure becomes too low or high. 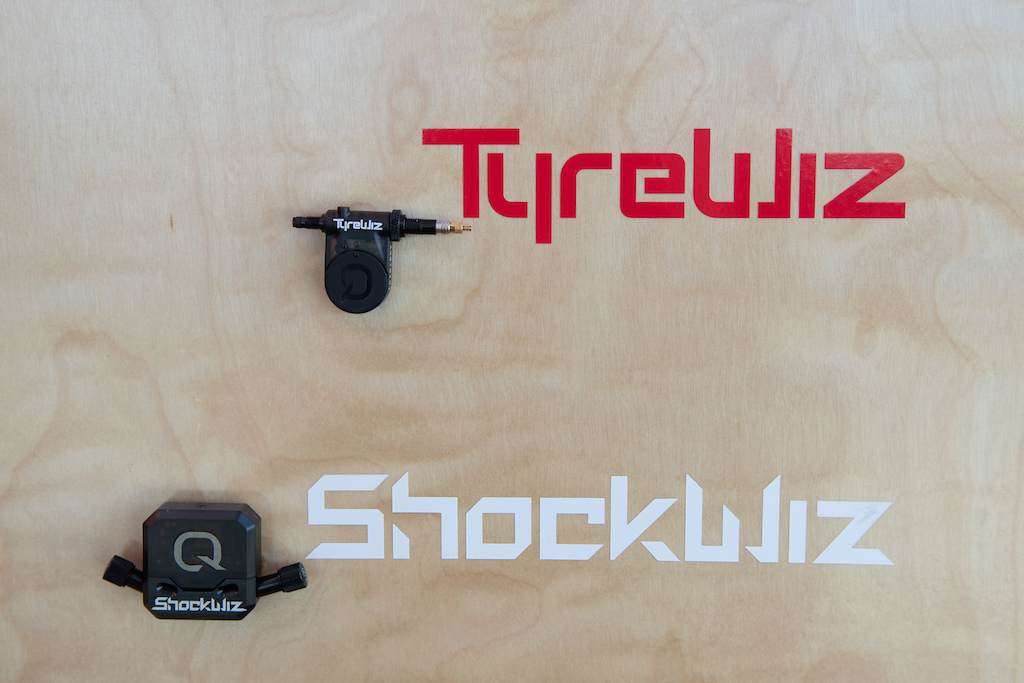 The Wiz family.
The waterproof and dustproof unit takes a CR1632 battery that's claimed to provide a 300 hour run time, and weighs a scant 10 grams. The price isn't quite as low as the weight, and at $199 USD for two devices it'll likely be something that only the most dedicated tech geeks will gravitate towards.

It might not be for everyone, but it will be interesting to see exactly where and how the TyreWiz gets used. What if you were able to see a rider's tire pressure in real time as they flew down the rubble-strewn World Cup DH track this weekend in Croatia? Or if you could check the pressures of an entire fleet of rental bikes without even needing to pull out the floor pump? Analog, non-remote gauges aren't going anywhere, but the TyreWiz is likely to start showing up in a variety of places once it becomes available this June.

Drew-O (Apr 20, 2018 at 13:42)
Here's the only defense I can think of: I've totaled 2 rims by initiating a slow leak that leads to loss of pressure and eventual rim-rock contact over the course of a long descent. If my phone could be set to go off like an alarm when pressure drops below say 20PSI, it might help.

But make these things $40 the pair, then we'll talk.

ibishreddin (Apr 19, 2018 at 23:12)
I'd much rather sell my bike to afford it. That way you have some extra money left over #financialadvice

slumgullion (Apr 19, 2018 at 22:50)
@cunning-linguist, you could probably cut off one knob on the other side to make up for that 10 grams. And what about all that sealant sloshing around inside the tire? What does that do to the balance?

AdustytrunkMonkey (Apr 19, 2018 at 23:17)
@The-BIG-GT: Glad to hear someone knows the difference between centrifugal and centripetal force!

AMGoran (Apr 20, 2018 at 0:02)
@slumgullion: no you have to ad weight on the other side to balance not remove that makes it even more unbalanced

Ryanrobinson1984 (Apr 20, 2018 at 3:32)
@The-BIG-GT: centrifugal force only starts applying forces evenly in a circumference after 1200 rpm, much faster than a typical mountain bike wheel rotation speed

mnorris122 (Apr 20, 2018 at 5:34)
Mountain bike tires and rims, just like car tires and rims, are never balanced perfectly anyway. Sometimes my valve stem doesn't naturally rotate to the bottom if the wheel's in the truing stand because a section of tire is stupidly heavy for some reason.

I promise you won't notice the nonexistent "balance issues" that come with a 10 device.

toop182 (Apr 19, 2018 at 22:39)
the core of the problem here is the price. knocked the wind clean out of me seeing that. this is just not going to inflate interest at that price. rocked me to the core knowing people might actually have time mid run to check if there tyre pressure has dropped?

NordieBoy (Apr 28, 2018 at 15:08)
Mid-run may mean after 3hrs in the hills. Being able to tell at a glance if it's just your imagination or you really do have a slow leak before causing rim damage.

bouk (Mar 24, 2020 at 9:57)
@andrewbikeguide: You're correct about the regional spelling difference for tyre/tire, but not the languages. Tyre = British English or UK English. Tire = North American English. They all speak English. American is not a language.

lywmsuqpon (Apr 20, 2018 at 4:00)
have you seen a tubeless setup with shrader valve? most of current rims won't even accept shraders (hole for valve is too small)

mnorris122 (Apr 20, 2018 at 5:36)
@strasznyzbigniew: Yup! Popular for fatbikes, you can shoot a stupid amount of air through the valve with the core pulled and seat tires much more easily. Honestly, schraders should be used on all mtbs for this reason exactly, leave presta for the roadies who a) have tiny tires and b)might actually care about how much their valvestem weighs.

lywmsuqpon (Apr 20, 2018 at 7:36)
@StraightLineJoe: so, regular presta valve, then adapter, then some chinese pressure monitor? no risk for loosing pressure whatsover. good luck with that.

derTetris (Apr 19, 2018 at 23:22)
a bluetooth tire monitor system for some ppl ...a douchebag detection system for the others

AntN (Apr 19, 2018 at 22:36)
What would go 'full enduro' is the have a mini gas cylinder attached to the value that would allow a few PSI changes on the fly. So you could add a few PSI whilst transferring between stages, then let down a few PSI for the timed run. Would save having on carrying around a pump.

svobodarider (Apr 20, 2018 at 0:13)
I am coming to you with this BrakeWiz for improving your brake performance. Online recommendations to get a KOM on any trail. No battery needed! 249 USD / EUR / GBP based on your region.

fullfacemike (Apr 20, 2018 at 0:08)
This is incredible. The technologies that are available to consumers today is staggering. Not saying I'm buying one, but the fact that it's 2018 and anyone with $200 to burn can get this is truly amazing to me.

lywmsuqpon (Apr 20, 2018 at 4:04)
i propose AnalWiz, so one can check whether he shit his pants after some scary downhill ride

I mean even the examples in the article are a little ridiculous. It could be useful for a DH team from a data acquisition standpoint if it can record the presures, but in real time the info is useless for DH riding. And rental fleets? At $200 a pop? Not likely. C

SXbegins (Apr 20, 2018 at 3:31)
Haha.....If only you lot on here started your own race team...bike company....component company....etc you'd have a world dominating race team, create the most awesome components and bikes and never waste any money on useless components or designs because everything would be perfect and exactly what pinkbike forum guests want (screw what everybody else in the world wants). Oh no wait, you can't....oh well guess you could just come on pinkbike forum and give your ill informed views and 'expertise' instead

Same people every article, every day and always negative (apart from the comedy replies....I like them)

Pinkbike forum....or Pinkipedia as it's also know (the font of all knowledge) haha

But then someone comes out with a means to collect real world data like the Shockwhiz or the Tyrewhiz and everyone cries bullshit and too expensive. Why? Because all these yahoos against this tech aren’t as smart as they pretend to be on Pinkbike.

angelofverdun (Apr 20, 2018 at 8:56)
Other planned Wiz family products:
GripWiz: Get updates when your grips should be replaced
DropWiz: Tune your dropper return behaviors. Range from 'stand and wait for it' to 'screw you manhood'
CableWiz: Detects cable stretch
WhizzyWiz: Tells you when you should hit the john

jnicol (Apr 19, 2018 at 23:13)
Economics: That price is not going to allow for very much demand.
Surely they did some research into this, but it doesn’t make much logical sense to me. I like the idea, but at that price there is no way I’m a customer. Even at half that price - still no way.

Those little units can’t cost very much to produce, they must be trying to cover R&D. If so, I think a lower price would sell more units and net them more return.

But I’m sure they arrived at $200 after some research.

I suppose if they called them a pun on a cult film star and spent a lot of money on marketing then it might work.

BenPea (Apr 20, 2018 at 0:35)
@fullfacemike: I think he's saying that even the most noble of elements could not enhance this pointlessly innovative product.

A rubbish scifi movie that went straight to VHS, and still flopped.

Riggbeck (Apr 20, 2018 at 0:07)
In years gone by cycle tourists would light them by a camp fire, now the new generation of screen jabbing bike packers can upload the data to Strava and see if they go faster before or after. If everybody in the group had one as well you could really see who dealt it.

juansevo (Apr 20, 2018 at 4:55)
Laugh all you want, but this is a brilliant device that’s more practical than upgrading to ti spindles, light stems, carbon frames, and on goes the list of things people piss away money on when ut comes to bikes that have things people don’t need.

Combine data collection tools like this, the shockwhiz, a powermeter crank, and your standard GPS based device a smart rider could be riding a bike thats $3000 for suspension ot a $2000 hardtaill and really learn alot a out how they ride and how to save time on local segement on Strava or an enduro race/DH this info could be the difference between a podium or mid pack.

Could see cyclocross racers eating this up ad well.

dicky21 (Apr 20, 2018 at 5:00)
Surely if it's real time, the figure will be jumping around all over the place (if you're on a downhill run or similar). Seems so pointless having it that exact unless it takes an average every 10 seconds or so...

it's essentially the same technology

tempo (Apr 20, 2018 at 10:55)
When I think about how the plastic valve caps vanish off my bike in minutes I shudder to think how fast I’d break these things off. $200 and it’s just dangling there waiting to get smashed and lost.

colourclashing (Apr 19, 2018 at 23:48)
why not just go the whole way and do a valve stem with integrated TPMS, and why not give a little warning light on your bars when it gets just a little too low or high.

pedaladdictioncollective (Apr 21, 2018 at 3:03)
the best bit about all of this is you still have to buy normal tubeless valves!!!!!! on top of this haha wtf sram atlas integrate them into a pair of tubeless valves

lywmsuqpon (Apr 20, 2018 at 4:06)
no. but you will get low pressure notification on ya phone like 2 mins after noticing you are running on flat

surfhard987 (Apr 21, 2018 at 21:07)
Or maybe it’s a telemetry system to tune the compression/rebound characteristics of foam tire inserts...

RunsWithScissors (Apr 20, 2018 at 5:01)
Pretty sure my boss will buy these. He can't resist electronic gadgetry.