The infamous Bottlerocket. The bike that put us on the map. At a time where bikes seemed to fit into more distinct categories, the Bottlerocket broke those barriers, and opened up a new category of bikes that could do it all. It was low slung like a slopestyle bike, with the travel and geometry of a freeride bike, while still being able to pedal. Our product launch video for the original Bottlerocket is still our most ever viewed video we have made, so we thought it would be a fun idea to grab the PBR edition Bottlerocket, and head back to the woods of Maple Ridge, B.C. and find out if the Woodlot trails were just as magical as they once were.

Follow along with Kyle (TR co-owner) as he revisits some of the old stunts he hit in 2007, and rides some of the revamped trails people are still riding. 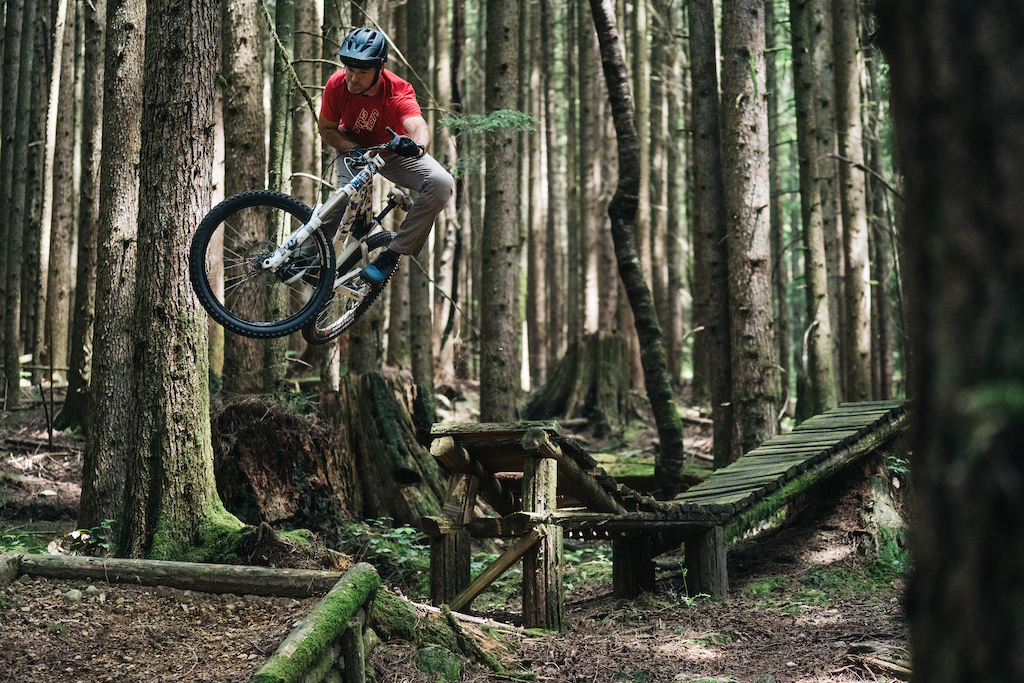 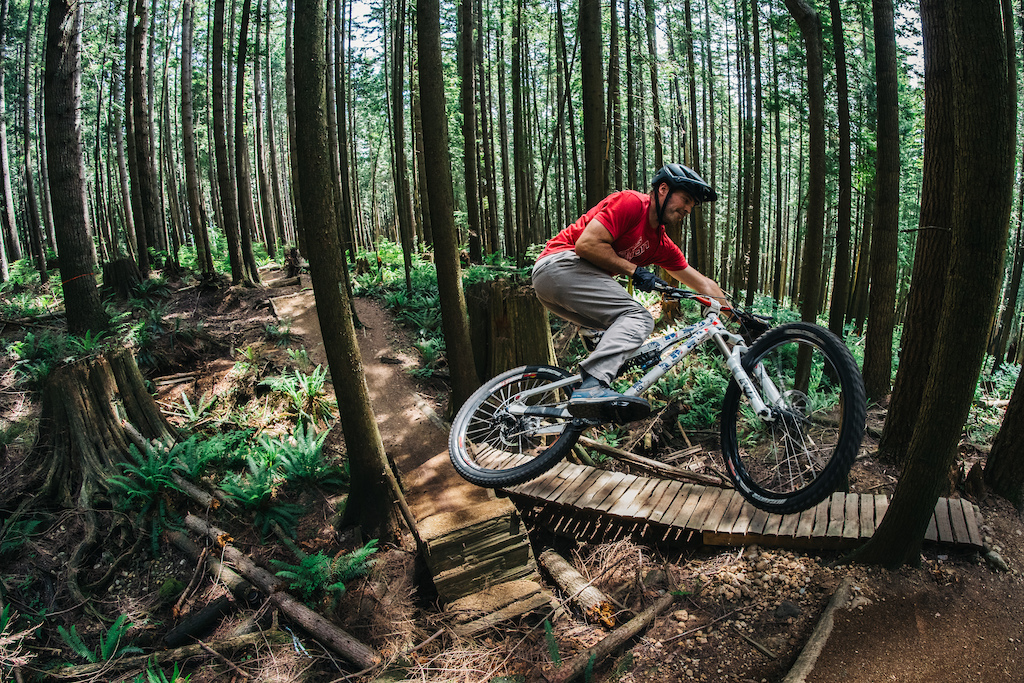 A mixture of old and new. We were surprised to see much of the trail had a fresh coat of dirt. Some cool things going on in those woods. 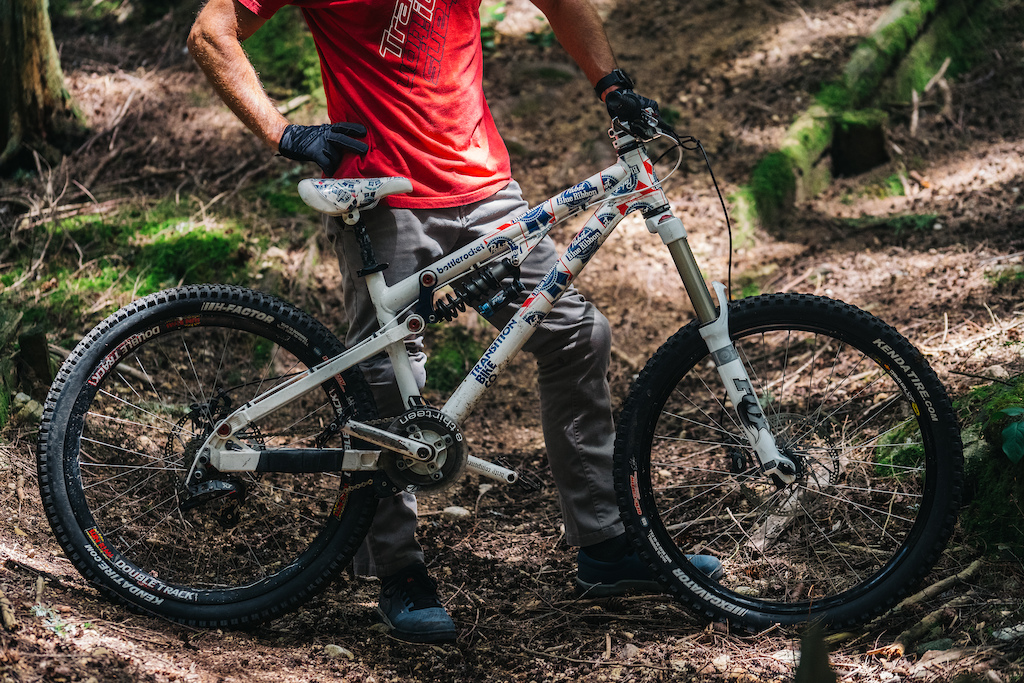 The reach on a 2009 Bottlerocket is only 8.5mm longer than our current XS Scout.

Bike build details: When we dreamed up making this video, we originally had planned to build a new bike with the last Bottlerocket frame we have in stock. Alas, the difficulties of finding the parts needed amounted to be more than we wanted to get into, so we hopped on the Pinkbike BuySell and found this PBR beauty for sale in Maple Ridge for $600 bucks. We got it back to the HQ, swapped a fresh set of Juicy 7's on it (thanks to TR Product manager Sam who still had a set), some fresh Kenda H-Factor tires, and away we went. Although slightly small, Kyle was right at home within a couple turns. 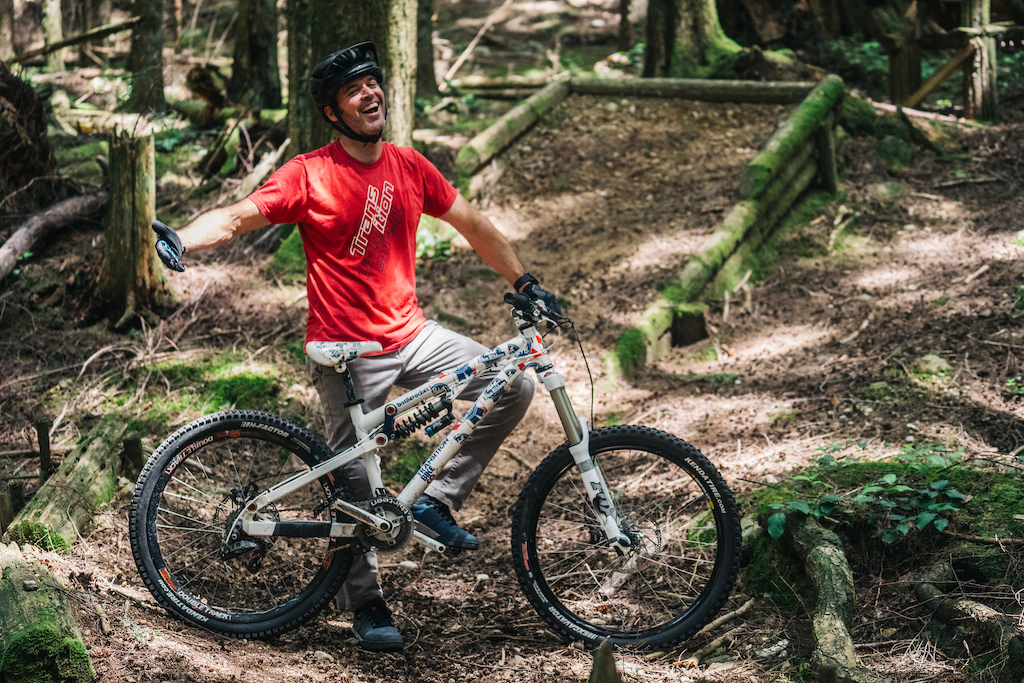 matmattmatthew (Jan 30, 2020 at 6:23)
I lusted after the Bottlerocket when it came out. I was in college and all my friends and I rode was mini-dh style trails with manmade jumps and features. It was the exact bike I needed at the time, I just couldn't afford it.

endurocat (Jan 30, 2020 at 6:48)
Difficulty finding the Parts?
Fox stills sells the fork and shock.
Im sure they have a translation 32 wheelset.
A lot of companies sell 26 inch wheels too.
The same goes for the rest of the build.
Seems to me that , either they got too lazy to do it , or want to spread rumors that 26 inch slopestyle bikes don't exist.

just6979 (Jan 30, 2020 at 7:24) (Below Threshold)
@endurocat: Hardest thing to find would be good tires. Sure, Maxxis, Kenda, and others still make some 26" tires, but the selection (online and even worse in stores) is pretty slim, especially if you're trying to find strong (but not DH) casings with good rubber (talking 3C or such, not Single Compound or "Sport" hard crap) that aren't relatively smooth slopestyle treads

Fox doesn't seem to have any 26" 36 forks besides the 831 on their site though, so that'd be more difficult to find.

TransitionBikeCompany (Jan 30, 2020 at 8:42)
@endurocat: Ha, definitely not spreading rumors that 26 bikes don't exist. When we were dreaming up this project, we really wanted to jump on a bike that actually felt of the time, not an all new Bottlerocket built from brand new parts. We tried to search around for old parts in our HQ and everyone's garage, but couldn't get the necessary components to make it period correct. So we did the next best thing, and hopped online and found one with some solid wear and tear from 10 years of riding, and snagged it up. After a tune up and a couple replacement parts to make it functional, we were ready to go. Now the bike from the video hangs on the wall in our showroom.

pourquois-pas (Jan 30, 2020 at 10:19)
@just6979: I have at least 3 sets of original high rollers on various casings and mostly new or slightly used kicking around my shop... and I doubt I’m the only rider who could say this.

Also, "dropper post compatibility" is a useless term. Perhaps you meant "internal dropper routing", but there are plenty of great externally routed posts (Fox, PNW, KS, just to start) so there is nothing stopping you from putting a dropper on that frame as is.

wowbagger (Jan 30, 2020 at 7:21)
@DirtMcGuirk07: that's not the point - with all mentioned changes you might as well say "i'd marry you if you were 10cm taller, had a wider pelvis and your feet 2 sizes smaller." we're just not talking about the same thing anymore.

I meant internal routing and I meant 26" frame with ability to run 27,5

And I know about externally routed posts, I use Brand X Ascend II XL post on my old Banshee Scythe

just6979 (Jan 30, 2020 at 7:19)
Heretic! You're going to make my new bike worse by riding and enjoying that old fashioned junk! I can't believe you would subject the rest of the world to your disgusting tiny-wheeled obscenities. Think of the children!

Mine is trail converted (light wheelset, Angleset puts the HA to 66 deg, reamed seat tube that allows a 30.9 dropper post, Pike fork and Monarch shock... under 32 lbs, 46 tooth rear cassette). For sure the most nimble bike I have (feels a bit nervous when fast... so I don't... lol!).

nickmalysh (Jan 30, 2020 at 8:26)
Nice rig, Nothing stops you to have fun on it, Partially I do understand n+1 thing, however for the park / recreational jump ride such type of bike serve absolutely well without frame upgrade for years

snl1200 (Jan 31, 2020 at 16:36)
What would a new Bottle Rocket be like? Kinda like a patrol with a little less rear travel for "sportiness", a little shorter reach, and even shorter chain stays? I lusted after this bike at the time. Was so cool. However, I'm pretty happy with my current Transition.

chriskneeland (Jan 30, 2020 at 6:21)
@dreamlink87: I was thinking more between slopestyle and FEST. Maybe mini-FEST. That'd be a good test. Can a Bottlerocket handle the FEST series. Send one to Nico.

hypa (Jan 30, 2020 at 11:23)
I still have a small PBR Bottlerocket that I've owned since new. It's still in great condition too in it's new life as a spare park bike. Man, I used that bike for everything. Gruelling climbs while exploring Whistler valley trails, but the downhill was always worth it. Years of ripping the bike park, and the skate park too. Granted, I was 10 years younger myself. le sigh..... kickass throwback content though!

nikoniko (Jan 31, 2020 at 17:30)
The bottlerocket still killing it!
One of my favorite bikes for sure, the first trail I rode on it, I knew it was a keeper!
It had short travel but would eat up drops and jumps without hesitation!
RideOn BottleRocket!
www.pinkbike.com/photo/4331606

also really like the oldschool bike revival, just got myself a small weeled bike again one week ago, so much fun ^^

chileconqueso (Jan 30, 2020 at 6:11)
My Preston fr was a monster too. It did everything pretty well! I spent way more time riding Galbraith on my Evil hardtail in mid 2000s. Danger is exciting!

Deanoshred (Jan 30, 2020 at 8:07)
I owned that bike & raced crankworks Dh on it, such a fun, playful bike. Had that tshirt too ha. Thanks for bringing the memories back!

snl1200 (Jan 31, 2020 at 16:47)
There were some bikes that just captured the ethos of the time. The Bottle Rocket was one of them for sure. It's probably a personal list but others I'd add would be the SC Bullet and RM 7- both still have a nostalgic excitement and represent how exciting the progression in the sport felt at the time. I've never owned a Bottle Rocket but remember heavily debating between it and a Nomad. Both cool bikes at the time and also represent the movement of the sport.

secondtimeuser (Jan 30, 2020 at 6:20)
My Bottlerocket was the first high end MTB frame I bought brand new, got it custom painted to match the orange Z1s I'd been using on my previous bike. It served me well!

Sshredder (Jan 30, 2020 at 8:52)
Has the playful feeling of a BMX with the solid feeling of a DH bike. Nothing but fond memories of the Bottle Rocket .

notthatfast (Jan 30, 2020 at 9:32)
Man the bottlerocket is still a great looking bike, hell I'd say it still looks as modern as any of the other alu-framed bikes currently being made.

emptybe-er (Jan 30, 2020 at 9:55)
Dirtbag put them on the map years before the bottlerocket. It was the least expensive freeride frame available for a while. The first gen bottlerocket really sucked. Second gen not much better with a huge coil mounted as high as possible on the frame and the t-rex reach, they encouraged poor bike handling, such as the schleyble top, but everyone had one.

slayersxc17 (Jan 31, 2020 at 9:58)
Watching Brad ride scared me. Still have a pair of his Spectrum Techwear shirts laying around somewhere

Dude, you and I have bike twinsies! Do you still have it? Looks beefier tho... how much does it weigh?

FlounderPounder (Jan 30, 2020 at 18:17)
light that fuse @TransitionBikeCompany and bring that sucker back. Or a Transition Beer branded bike!

BCtrailrider (Jan 30, 2020 at 20:51)
They should make a slopestyle bike that looks exactly like that but with ss geometry

itslightoutandawaywego (Jan 31, 2020 at 13:01)
My BottleRocket is in pieces in the garage waiting to be built up for my kids.

granite (Jan 30, 2020 at 11:48)
Yeah, that comment about how awesome the talus felt had me laughter out loud. I put a talus on my 08 heckler because I thought fox was supposed to be the shit. That fork sucked so bad. Slightly better than the stock rs recon, but not really.

bobthestapler (Jan 30, 2020 at 11:49)
My thought exactly. My old Talas was horribly stiff and that open bath would turn it into a pogo-stick after only a couple miles of decent.

freeriderayward (Jan 30, 2020 at 12:00)
I must have the world's best talas haha. It has never not felt buttery smooth, it's handled everything I've thrown at it. It is on my wife's Banshee Spitfire right now, still going strong. But the only time I drop the travel is for putting it in the car.

TransitionBikeCompany (Jan 30, 2020 at 8:44)
He thought about it! But decided it was probably a better idea to hit that when someone who knows the speed is around. Bummer it was destroyed, we had planned to go back and ride it.

gemma8788 (Jan 30, 2020 at 10:48)
@microfiz: This is mentioned in other replies above, but they only had a frame and finding parts from the era was difficult (didn't want to throw a bunch of brand new bits on, which I totally agree with), so they bought a used complete and put on some decent tires, etc.

skerby (Jan 30, 2020 at 6:29)
Not modern pedalling, but people pedalled the bejeezus out of these bikes back in the day.