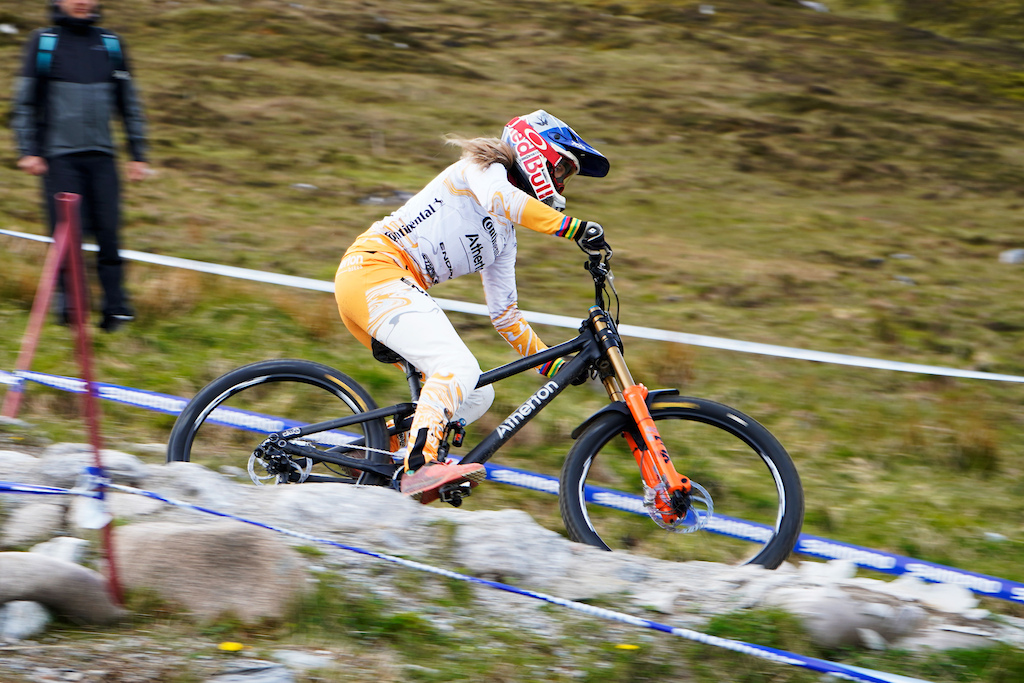 After appearing on the entry list and also making a decision not to race Rachel Atherton could now be getting between the tape for her first World Cup since 2019 after all.

Despite appearing on the entry list for this weekend's World Cup Rachel had previously decided to hold off a return to racing until the next British National DH race. Interestingly it seems after arriving in Fort William with the Atherton team Rachel has now decided she is taking on the challenging Scottish course. We heard rumours this morning that Rachel would be back on the bike and racing on Sunday and although we are yet to have this confirmed we have spotted her on her bike during Friday practice. 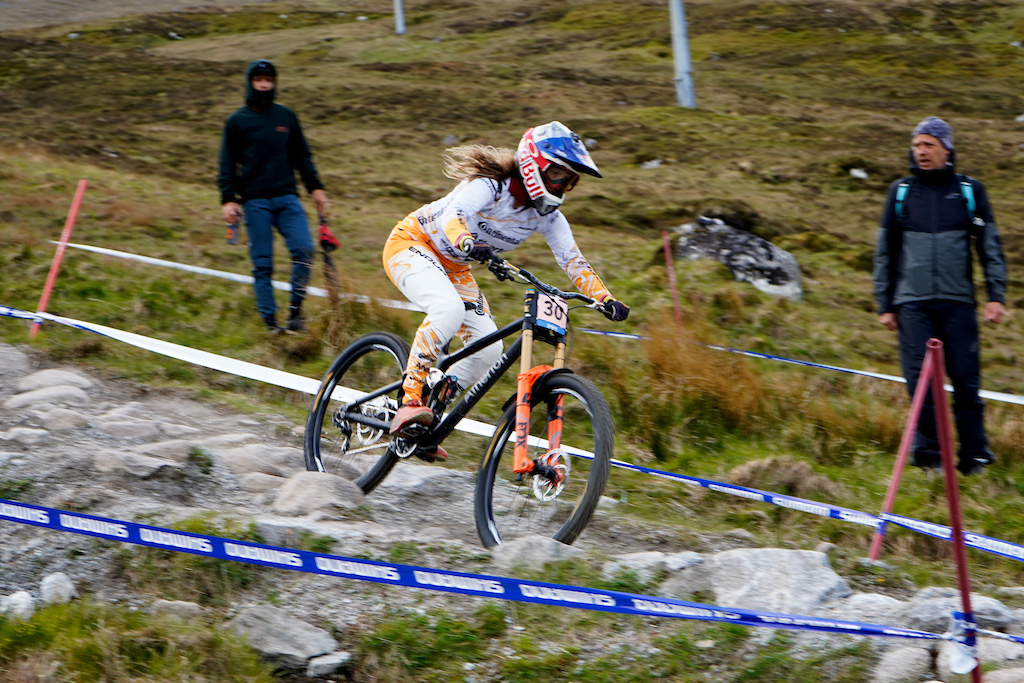 We have now had confirmation that Rachel is back taking practice runs today and is apparently buzzing to be back at World Cups. I wouldn't add her to your Fantasy League teams just yet though as after talking to the Atherton Team we were told that the current plan is just practice runs. There was a small hint that maybe she will try qualifying tomorrow but the current goal is still to have the next British National DH race as her first full race back.

scott-townes (May 20, 2022 at 14:58)
I think you're underestimating how much the others have progressed. Remember, multiple were starting to approach her pace in 2019 and they're a lot better now than then. The DH racing field has a way of jumping forward of the most dominant riders.

50percentsure (May 20, 2022 at 21:13)
@scott-townes: I think we all know realistically it will be a process. She said herself she was out of breath in practice at Ft Bill. But half the fun for us viewers will be watching the comeback process unfold. The level of talent at top of the field now is stratospheric.

And when she is back to full power...

ViolaVesperlin (May 21, 2022 at 13:45)
@scott-townes: Kinda have to agree. Rachel swings a big ax, but man the field is stacked. Camille, Vali, Myriam, Marine and Tahnee are all on fire.

Km303 (May 20, 2022 at 7:14)
In response to possible return of Rachel Atherton, Canyon, Specialized, and Santa Cruz all released their special "brown-pants" colorway of their team kits.

djlucas (May 20, 2022 at 6:13)
Be great to see her back but thinking she's going to slip back into a podium position is a bit optimistic. All the ladies have progressed in her absence but I'm sure she'll get back up to speed in time. I doubt she'll be too fussed about the result (outwardly at least!) but I bet she's keen to get back between the tapes and against the clock and see where she's at! Good Luck Rach!

jaytdubs (May 20, 2022 at 6:29)
Agreed, my guess is that she's looking to ease her way back in. Getting up to speed mentally and physically is a process and throwing caution to the wind isn't the right approach. Rachel is smart and I'll be surprised if she takes part in qualifying.

kazwei (May 20, 2022 at 8:08)
Daddy's going to take care of the Baby, so Mommy can have 4 quiet minutes for herself. Good to see Rachel back on the racetrack

ViolaVesperlin (May 20, 2022 at 8:44)
You know how when people domesticate a lion and then tell everyone how safe they are now and all the reasons why...till that lioness reverts back to their nature and swallows the upper half of the owners body in one go?

I think a few weeks ago there was a vid she was riding with Nina in Dify and it looked really fast. So hopefully she can get a good result

homerjm (May 20, 2022 at 4:59)
I think she rides a lot,and there are a ton of fast people ridding there. So I bet she would be on top 5 easy,maybe 3 no much trouble. I hope she does well and have a good time this weekend!

mtmc99 (May 20, 2022 at 7:09)
I have to imagine that its damn near impossible for someone who is this competitive to be around a World Cup and resist the urge to race

linton-photo (May 20, 2022 at 4:20)
Great to see her back out on the track and great PR for the team and the Atherton brand. Hope she does race just to see how close she is to the race pace these days

vectorforces (May 20, 2022 at 18:14)
Not racing - yeah right. Athertons don’t play but to win and she’s so dominant she’s probably still competitive for the podium

Rosstech (May 20, 2022 at 5:40)
Head times for victory and Rachel are a long way off, it's a lot of difference right now, this is reality, but a round of applause for her. She looks for motivation and to know where she stands relative to the competition. Greetings.

Balgaroth (May 20, 2022 at 3:48)
Pretty smart strategic move ! The only 2 real threats are out for Fort William so she could take a win and be in the race for the remaining of the season while not having to push too much as she is still not feeling super strong. Could make the women DH season pretty interesting.

Interesting. I still don't think she'll race, just useful to immerse yourself in the whole race weekend thing again. You could see how conflicted she was about it when speaking to Warner on his newest video at Dyfi.

thingswelike (May 20, 2022 at 4:12)
@Bustedflush: Miriam did trackwalk and nothing I've seen suggests she isn't racing

fatduke (May 20, 2022 at 4:15)
@bashhard: Hoffman and Cabirou to add to the list. It's definitely more competitive these days in the ladies class.

mattg95 (May 20, 2022 at 4:58)
I'm pretty sure Rachel doesn't think like that. Very much doubt she's considering what other people are doing, she's just listening to her body and what she wants to do, excited to be racing a home track etc

thingswelike (May 20, 2022 at 5:14)
@mattg95: On one hand I agree, but on the other she was saying how disappointing it was that timed runs at Dyfi didn't happen and also that she was following Nina down the trail trying to judge her own speed.

pisgahgnar (May 20, 2022 at 5:14)
@CM999: She has not said she is out. Go watch her interview on Wyn TV where she says she took some time to recover, working with the doc that supports the French rugby team, and is feeling good. Myriam is riding this weekend.

sino428 (May 20, 2022 at 9:14)
@pisgahgnar: Yea when pinkbike made that post about her and the concussions a couple days ago my takeaway was that it seems like she was feeling better now and planning to race.